I’ll be honest with you here. It’s been hard to get excited about new iOS games lately, especially my favorite genre — puzzles. After such a strong 2017, the truly great games have only been trickling in for 2018. It’s why I keep finding myself going back to Six Match after I complete my Dissembler dailies. So when I saw Pine Street Codeworks’ Tiny Bubbles, I was eager to try it but also had a healthy amount of skepticism due to being disappointed by so many games this year that I had gotten hyped up about. So I’m thrilled to say that this bright and bubbly game is satisfying in so many ways.

In Tiny Bubbles, your job is to match bubbles in groups of four or more of the same color. Wait, wait — don’t run away! I know it sounds like a match-three game, but this is most definitely no Candy Crush. Each level presents you with some foam and an objective, such as clearing all the bubbles or making two starfish meet. You have two tools at your disposal throughout the game, even though the objectives and elements within each level are constantly changing. Your tools are colored droplets and scissors. These items appear at the top of the screen, up to five at time. The leftmost one is what you have to use first and you continue using the rest in the order given. All you do for each move is tap a bubble where you want to drop the colored liquid, or tap a bubble’s edge to cut it with the scissors. That’s everything, but it’s constantly changed up to keep things from ever getting stale. Mixing colors is a huge part of the game, but it’s done in a way that feels fresh instead of old and tired.

There are two types of levels in Tiny Bubbles, with the occasional overlap here and there. The puzzle areas have a very specific number of moves per level and they require careful planning to solve. They’re more relaxed, but that doesn’t mean they’re easy. The arcade levels ask you to get rid of bubbles quickly and shrink the foam down to a tiny size, all while a fish name Bloop is spitting out more bubbles. In arcade, the droplets you’re given are more randomized and you can earn extra turns by matching ten of a specific color. But you also have to be careful not to let the foam get too big, because if it goes out of bounds urchins will pop it and you have to start over. What I really appreciated is that once you get out of the tutorial area, you open up two separate paths at once, letting you tackle either the more relaxed levels or more frantic ones at your own pace. It also means you’re rarely stuck staring at a single puzzle until you solve it. 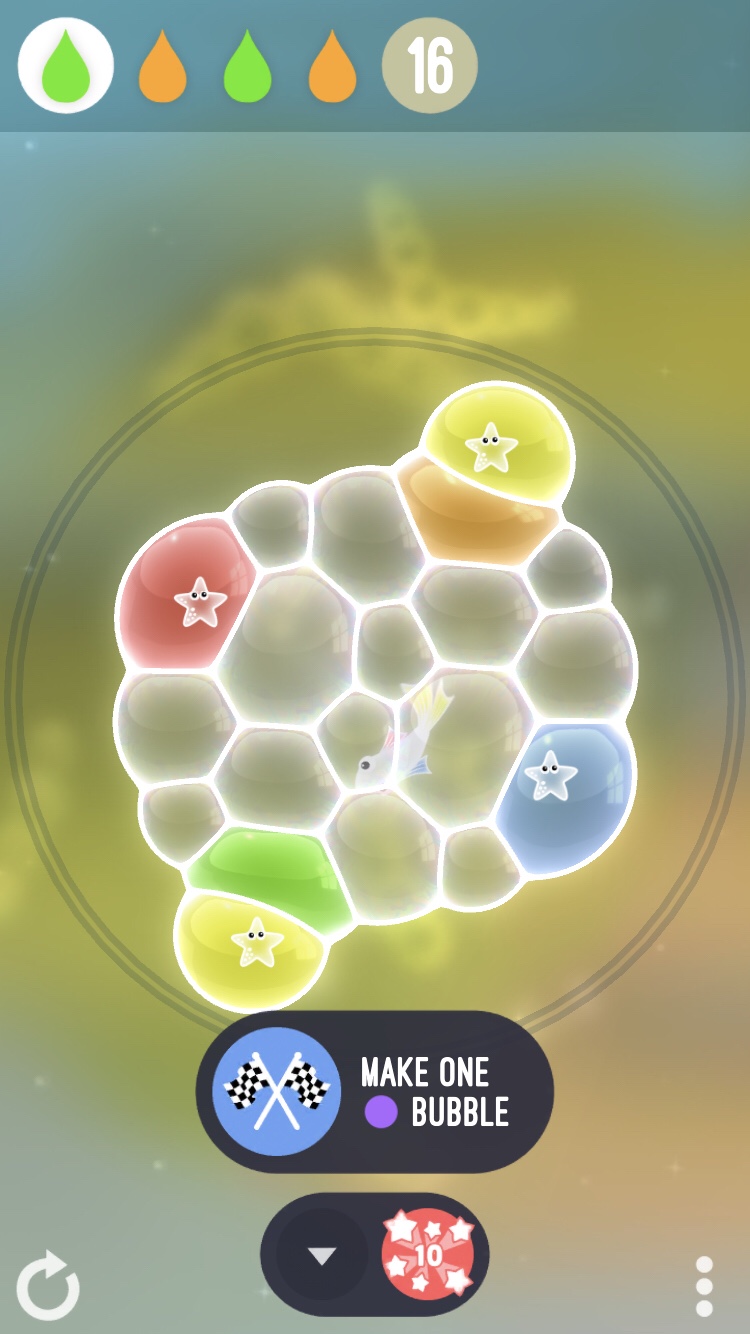 Along the way, you’ll encounter cute little starfish that either want to be free or just with each other. There are violent jelly crabs that head straight for the starfish if given the chance. Or shadow bubbles that can’t be destroyed or mixed with other colors, therefore potentially blocking your attempts at joining other colors. Some levels have Bloop either spitting out bubbles after every move you make or continuously. Some allow you to match five or more of a color to get a wild droplet that matches with any other colors, while other levels expect you to manage without them. And while I refused to use them myself, I appreciated that the game gives you a way to earn hints and power-ups that you can use when you get stuck in a jam. More hardcore players will likely consider these cheating, but I never felt pressured to use them. Since the developers aren’t including them as a way to squeeze more money out of players, I just see them as a user-friendly way of making the game approachable for all skill levels. 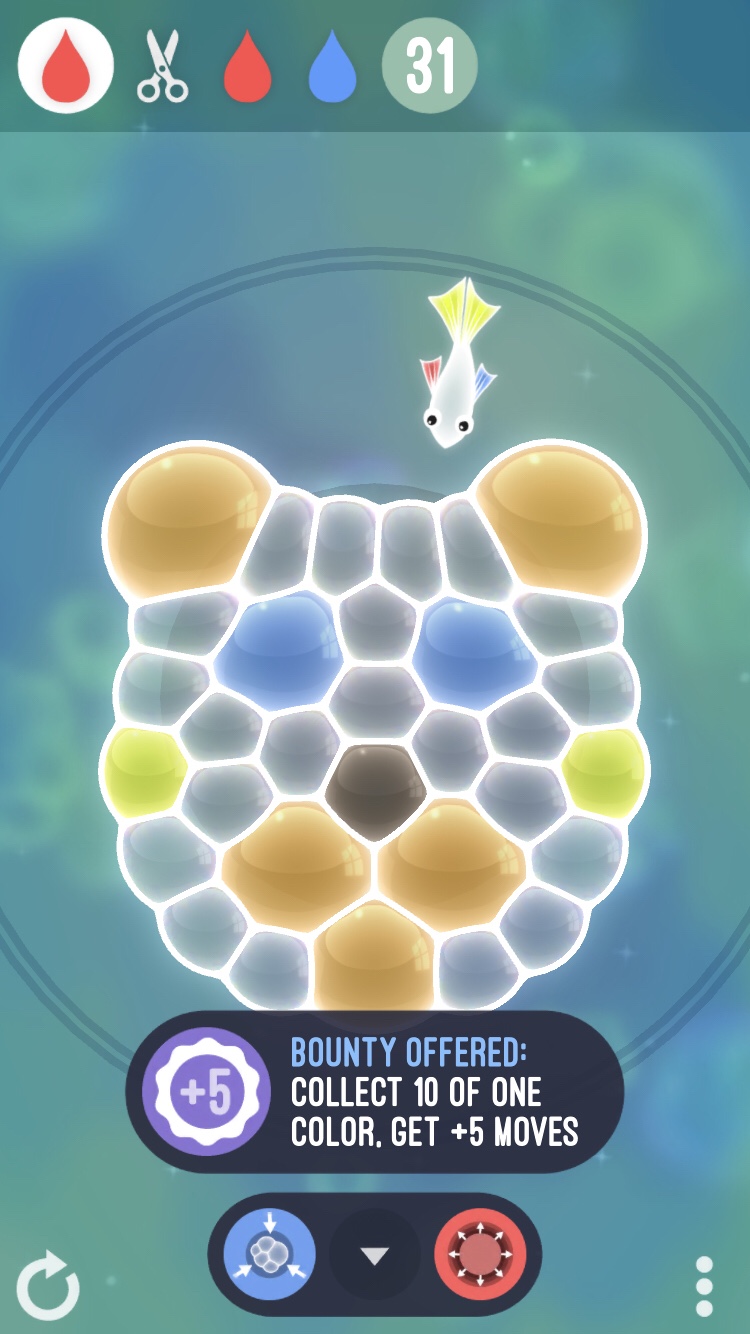 Sometimes you need to act quickly to reuse a bubble. For instance, say you matched four yellow bubbles but you still have three orange left. Before the yellow ones vanish, you can drop a red droplet in a yellow and it will then turn orange and match with the other oranges before disappearing. Other times, you may need to cut a bubble in just the right spot so the remaining bubbles get pulled together instead of separated. Since they’re all different sizes, you need to think about what will happen to the rest when you pop one. There are so many ways to manipulate the bubbles, but I’ll let you discover the others for yourself. The physics are part of what make the game stand out so much from other color-matching games. It’s so polished and all these things work so seamlessly. Besides watching the little animated critters, it’s incredibly satisfying to see the physics at work. 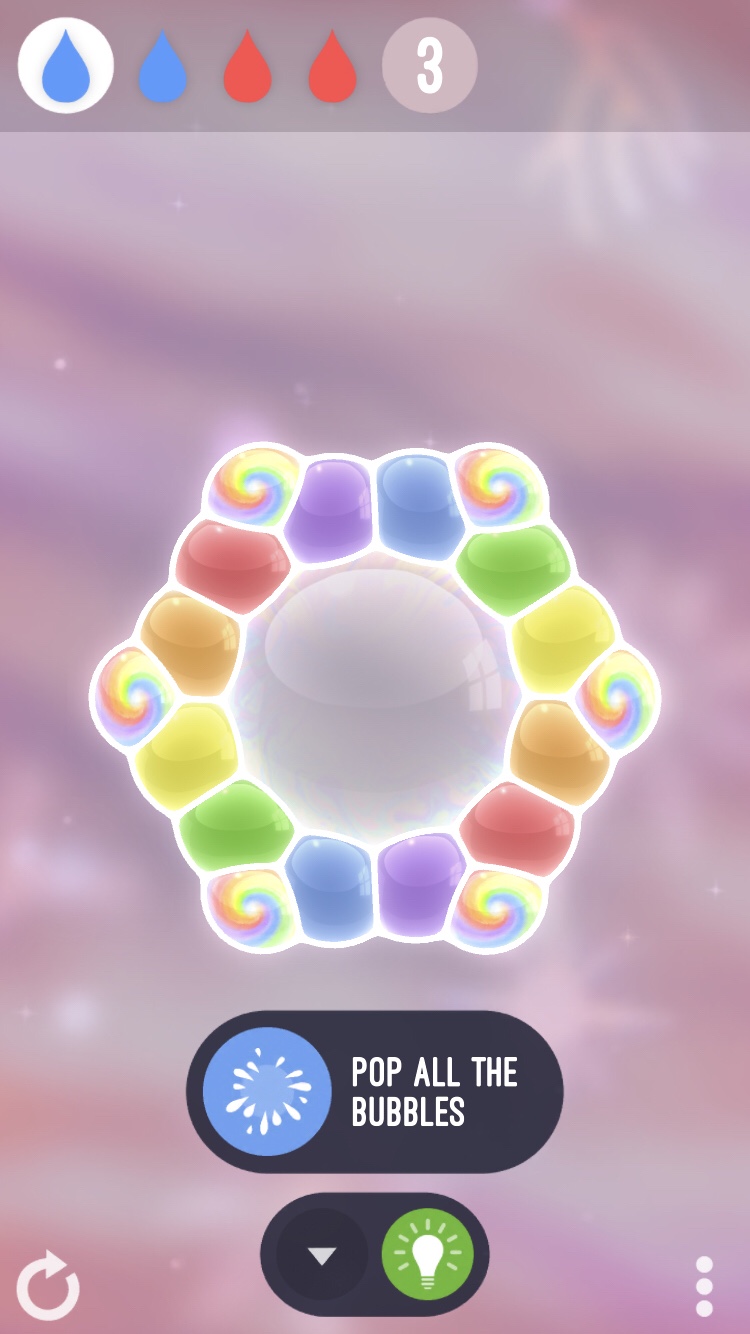 The game can sometimes be a little cruel, like when I clear all the bubbles but accidentally create a wild on the last move that gets left behind. Or when Bloop spits out a bubble that foils my chance at completing the level. But I never got so frustrated with the game that I wanted to give up. I always just took failure as a challenge. This was also one of the rare instances where I wasn’t bothered by the lack of an undo button, as it really wouldn’t make any sense here. The puzzle levels never have enough moves to make starting over feel tedious, and the arcade levels are fast-paced by design, so it would defeat the purpose if you could fix your mistakes. 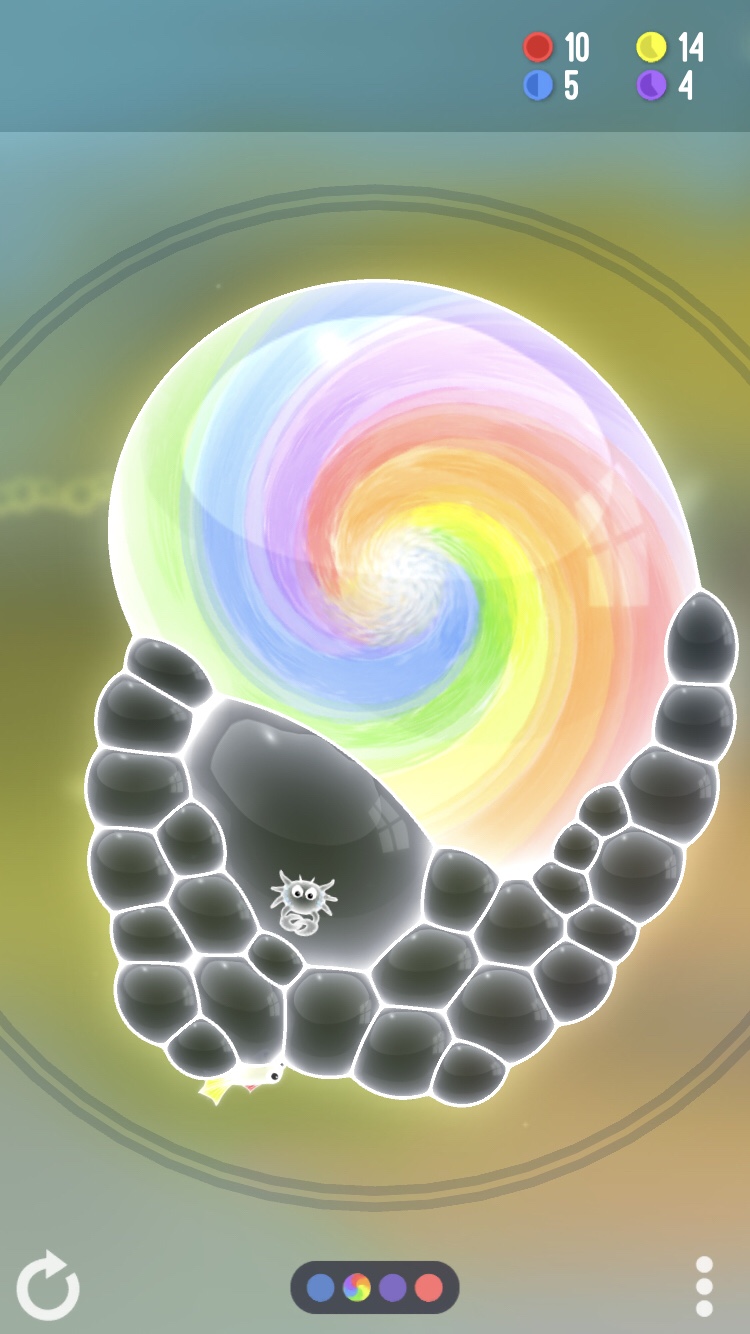 There are other little things that make the game a joy to play. It’s in portrait mode, which is perfect for comfortable one-handed play. The level select screen is user-friendly, showing you a little thumbnail of each level so you can easily find the one you’re looking for. And the seven worlds are bubbles themselves! The game also congratulates you at the end of each level, but not in a condescending or time-wasting manner. It’s quick, as the words appear and disappear in an explosion of bubbles that’s tasteful, not tacky like in so many other games. It even has a colorblind mode, but I can’t personally speak to its effectiveness. I should also mention that Bloop is adorable and I love how he swims up to each level as you unlock it. It’s a nice little touch that shows how much care went into the game. 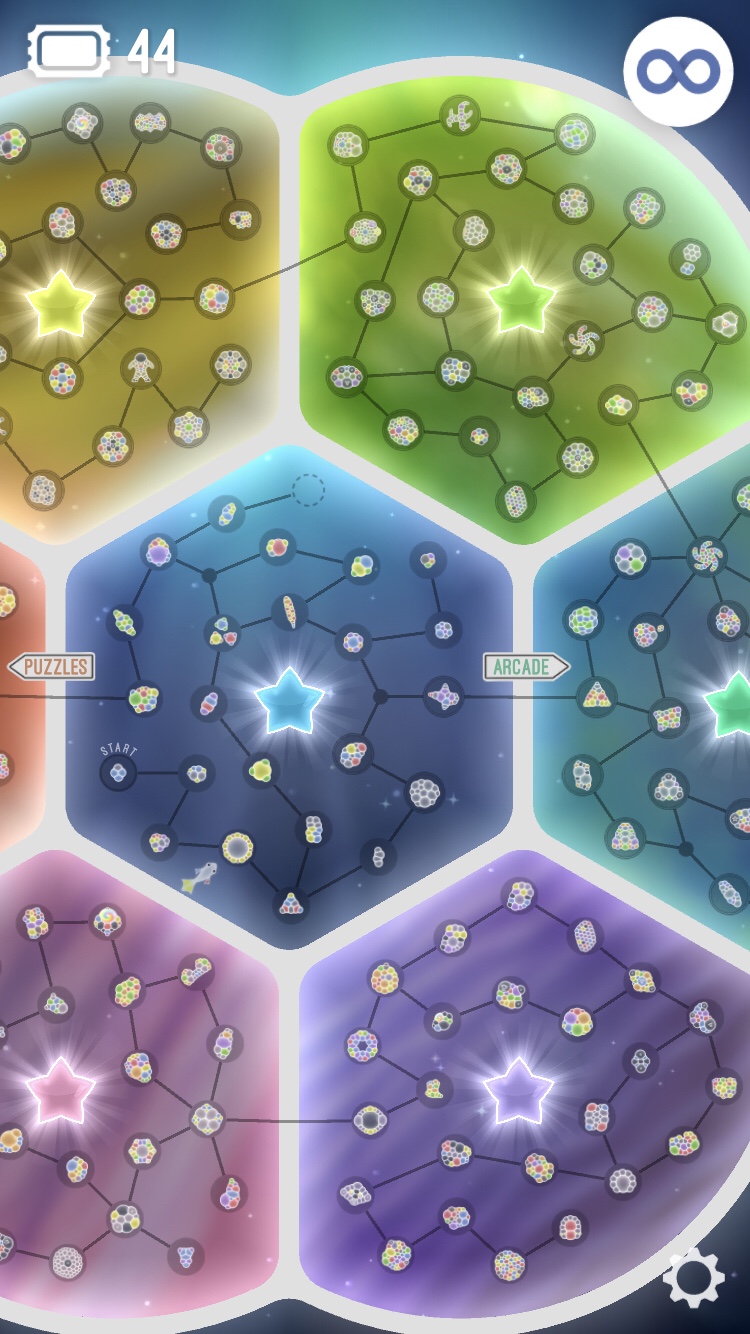 I really have very little complain about here. If anything, I’d just like extra features, and some of them are already planned for future updates. For instance, there are achievements in the game, but they don’t sync to GameCenter yet. Also, the arcade levels are timed and it keeps track of levels where you completed it in fewer moves than given. But there are no leaderboards or a way to tell which puzzle levels can be solved in fewer moves or which ones you managed to do so. There’s also no iCloud, sync, but there are multiple save slots, which is unusual for a puzzle game and a welcome feature, especially for families. But my biggest complaint for the game is that there’s no endless high score chasing mode. The mechanics would lend themselves so well to it, and I’m so eager for a reason to continue playing. But right now, the infinity mode that’s included is just used to earn tickets that you can use for hints and power-ups. It’s not scored or anything, so there’s not much to it if you don’t need the tickets. Thankfully, the developer is open to the idea of a true endless mode, so maybe we’ll see it in a future update. Until then, I’ll just have to be jealous of everyone who hasn’t finished the game yet. 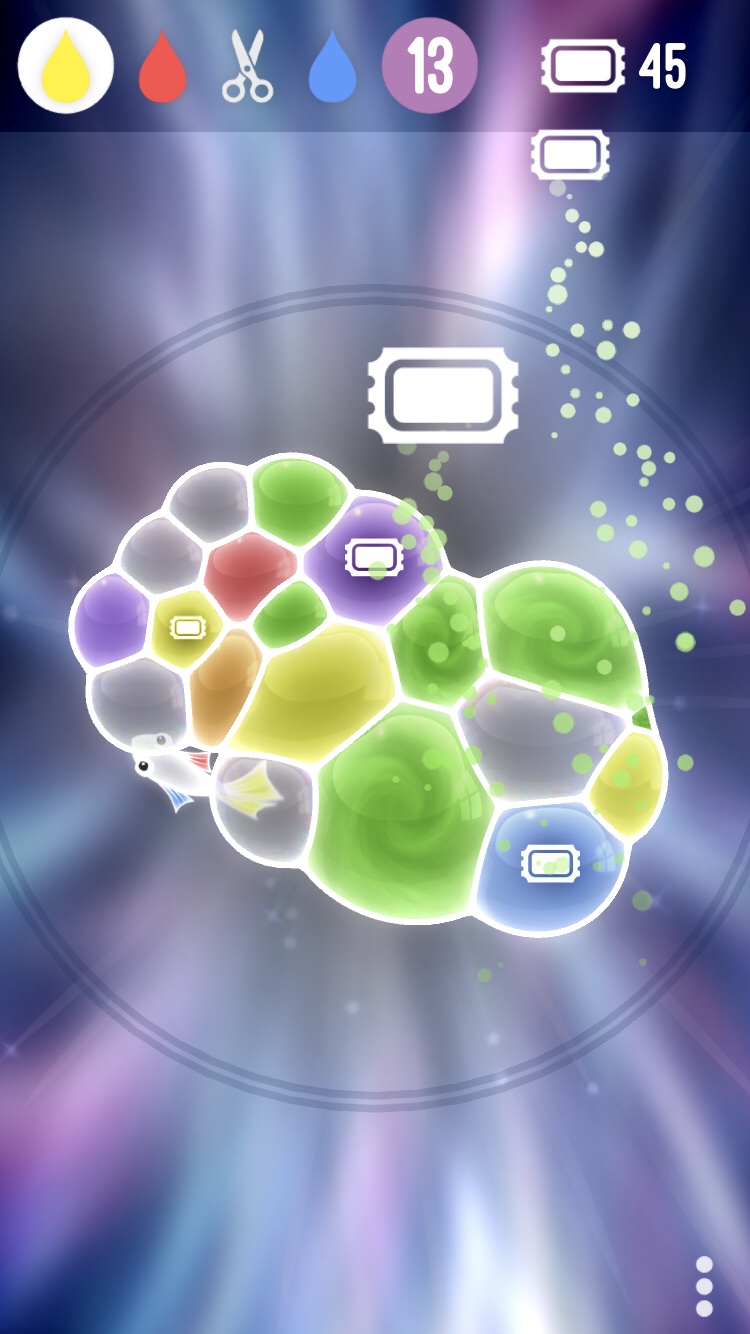 If you’re a puzzle fan, you really must play Tiny Bubbles. Don’t write it off because of its cute exterior. It does some really clever things, all while keeping the integrity of its mechanics. It’s user-friendly without talking down to its players and manages to stay interesting from beginning to end by constantly changing the objectives and layout of the bubbles. Even though there are over a hundred and seventy levels, I wish there was more just so I could keep popping those bubbles. Don’t sleep on this one. Grab the game here and get hooked! And if you get stuck, you can try my walkthrough guide.