BOMBARIKA is the first iOS game from Street Lamp Games, and it’s listed as having in-app purchases (IAPs) despite being a paid app, but I liked the diorama look of it and I was curious, so I took a gamble for $0.99. Unfortunately, an interesting idea is drowned out by poor design choices and rage-inducing bugs. On top of that, it seems like a free-to-play game that had a price slapped on it at the very last moment. And I mean the last possible moment.

The goal across the game’s fifteen levels is to use furniture to push a ticking time bomb out of the house before it explodes. “Out of the house” is used loosely here, as sometimes you’re trapping it in a safe before it goes off, so it’s technically still in the house. Anyway, the bomb drops into a room and starts rolling automatically. You need to tap things in its path to push it to another part of the room. There’s something very familiar about it, but not necessarily in a bad way. It’s an interesting concept, and figuring out the correct path to get rid of the bomb can be entertaining. But its slew of problems keep it from being a game I would recommend.

First off, when you tap a piece of furniture, it will move into a new position and then revert back to its original position after a few seconds. For example, you might need to tap a file cabinet just when the bomb moves in front of it, to push it to a fan, which you need to tap to blow it to a lamp which you need to tap to kick it to a safe that has to be open before the bomb gets to it. If you tap any of the items too early or too late, it will mess up the sequence. This means that, although this appears to be a puzzle game on the surface, it’s more about timing than anything else. If your timing is off, you could end up with the bomb in a spot you can’t reach, meaning you can’t beat the level no matter how much time is left on the clock. Your only choice is to start over. So besides figuring out the path the bomb needs to take, you’re expected to have perfect timing. If you’re off by a split second, you will often have to restart the level. 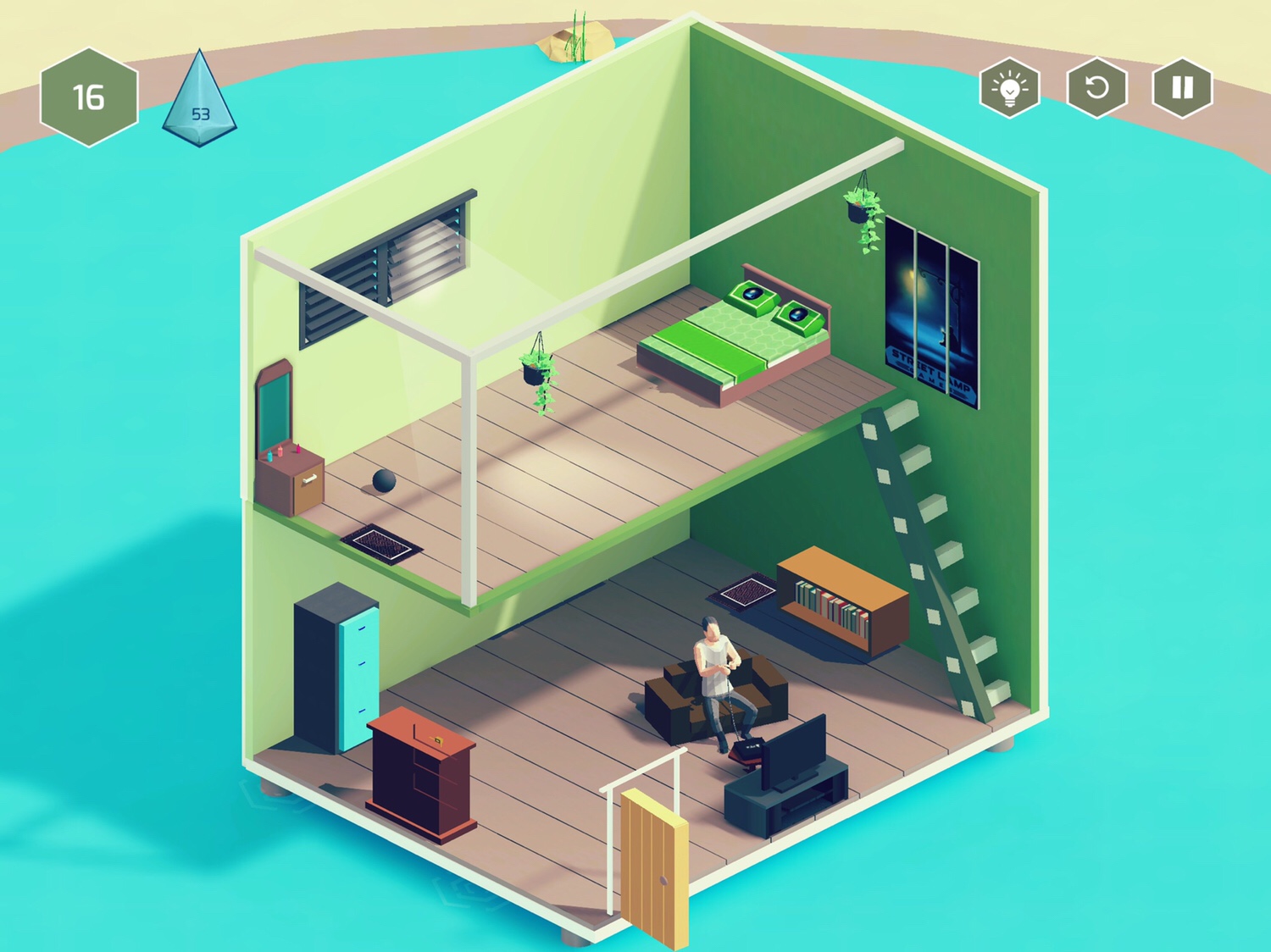 The game feels like it needs a bit more simplification. The timer together with the ability to get the bomb in an unwinnable position gives off the sense that there’s a lack of focus, like the developer couldn’t figure out what he wanted it to be. There’s a three-star rating system that seems to be connected to how fast you complete the level, as well as a clear intentional path, but there’s too much freedom to mess up. The physics system is too loose. I get the same feeling I had from Death Squared, where I enjoyed solving the puzzles but didn’t like how easy it was to slide off the edge of the board to my death. When you’re meant to tap five different pieces of furniture in quick succession, I think there should be a little forgiveness if your timing is a split second off. Perhaps it could have been set up with an invisible grid so you just need to be close with your timing, not exact. Especially when levels can involve multiple rooms. But this isn’t even the worst of the problems. 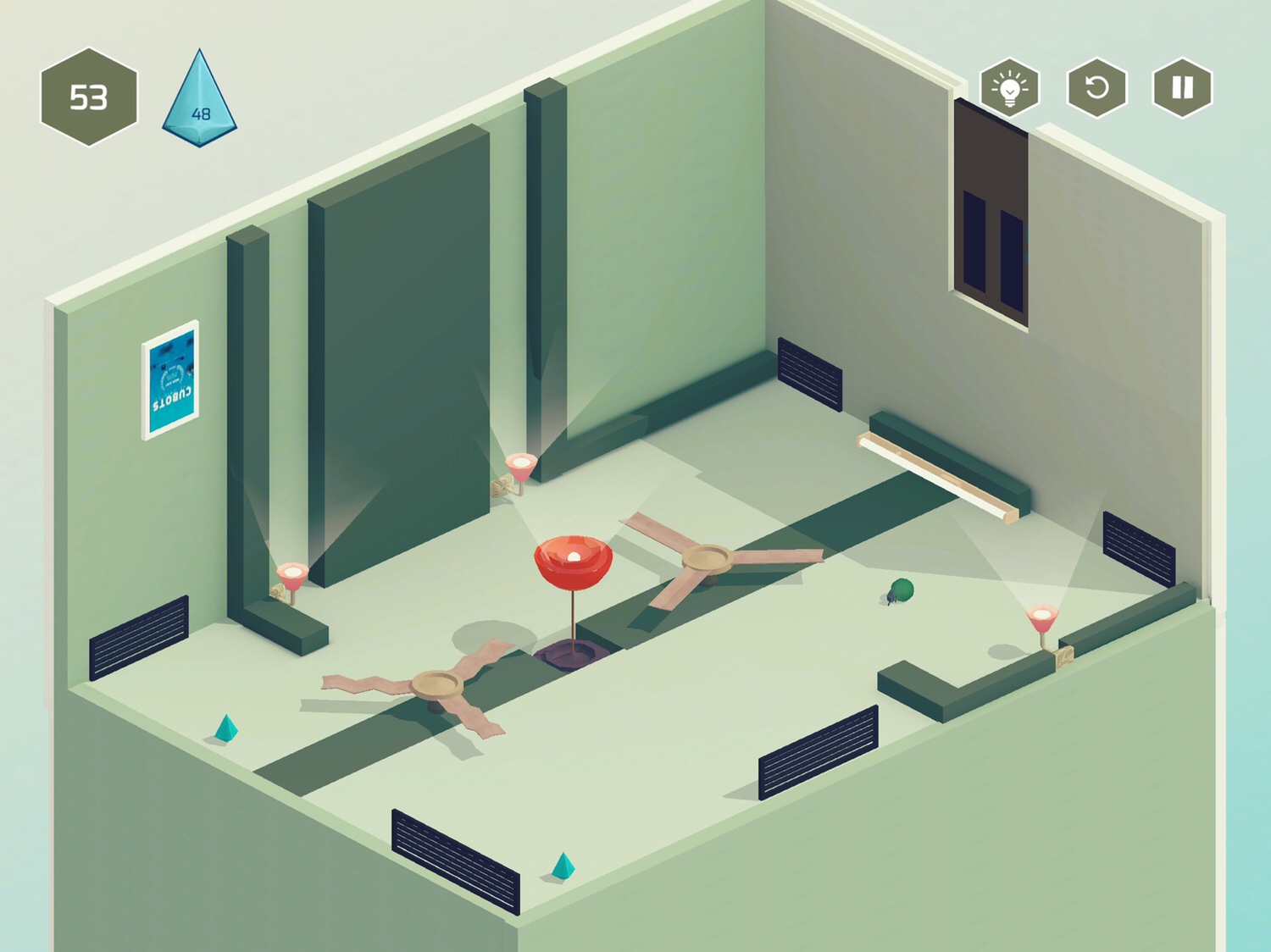 The biggest issue with BOMBARIKA is that it’s a physics game with broken physics. On occasion, I’ve had a drawer push the bomb even when it wasn’t aligned with it. And then the bomb would get stuck on a track where there’s no way to get it back on the right track. I’ve had the bomb go through furniture on a number of occasions. Most levels are short enough that I can kind of forgive it and just restart. But some levels involve more than one room or multiple bombs, and a bomb getting stuck in furniture means starting the whole thing over. The worst is the final level, which has you playing through multiple separate rooms in a row without a break between them. You’re on the same timer and if you mess up, you have to start back at the first one. It’s unnecessarily punishing on its own, but take a look at the video below to see what happened when I was in the second house. The furniture went right through the bomb and I had no choice but to restart. Why would I want to put effort into it knowing this can just happen again?

In a relaxed game where you’re not dealing with skill-based or timer-based puzzles, a bug here and there might not be the end of the world. But in a physics-based game that demands perfection from its players, it’s way too sloppy. It’s clear that BOMBARIKA wasn’t tested nearly enough and its issues are only made worse by its monetization and upgrade system that has remnants of what was clearly meant to be a free-to-play game. For instance, there’s blueprints that offer hints as to the path the bomb should take. But there’s a little video icon under it, which usually stands for “watch an ad for a hint.” So I stayed away from it for a good while until I finally tapped it out of curiosity. To my surprise, no ad played before showing me the blueprint. There’s another one of these that gives you a daily rika bonus and, again, I was expecting an ad to play but none did. 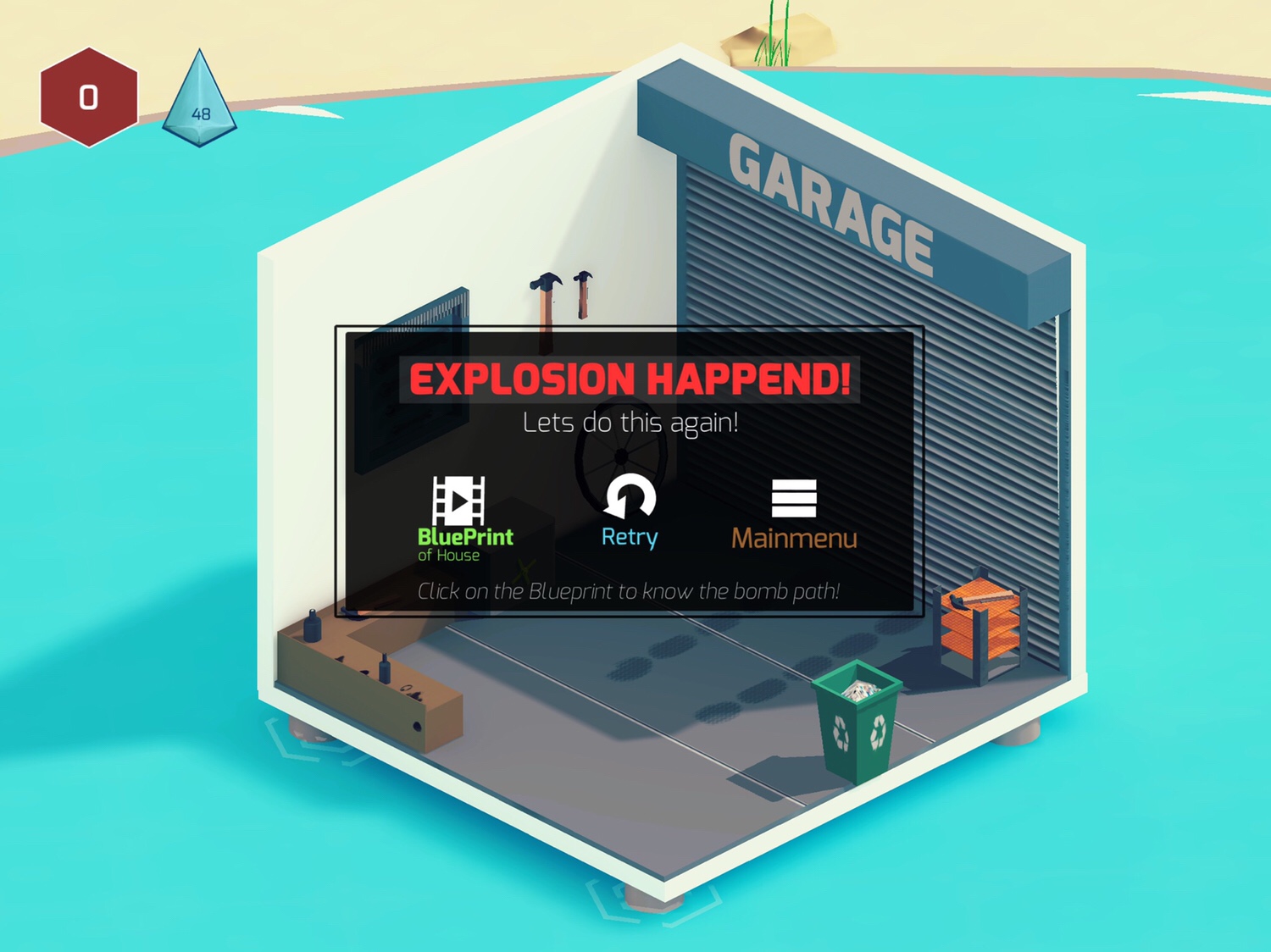 There are a number of different bombs to collect, as well. But instead of rewarding you with bombs for getting three stars in a level, it has you collect rikas, an in-game currency that you can also buy. Picking up the rikas in each level usually means sending the bomb outside the correct path, meaning you force yourself to lose if you pick them up. It’s a strange way of doing it, but it’s even worst when you see that there’s a shop where you can buy more rikas with cash. All the bombs besides the original you start with can only be purchased with rikas, and they all give you some sort of leg up in the game. One gives you more time, another shows you more of the blueprints, and one even removes the time limits altogether. The only outlier is the Granada, which is a mess in so many ways. It says on it that it costs zero rikas, but also “Watch an ad to unlock the classic Grenade.” Out of curiosity, I clicked BUY and was pleasantly surprised that didn’t need to watch an ad for it. But I did notice that it took five rikas from me. And this is for a bomb that doesn’t offer any benefits other than a different skin. I threw out five rikas for nothing. Sloppiness aside, this is clearly one of many signs this game was originally meant to be free-to-play. 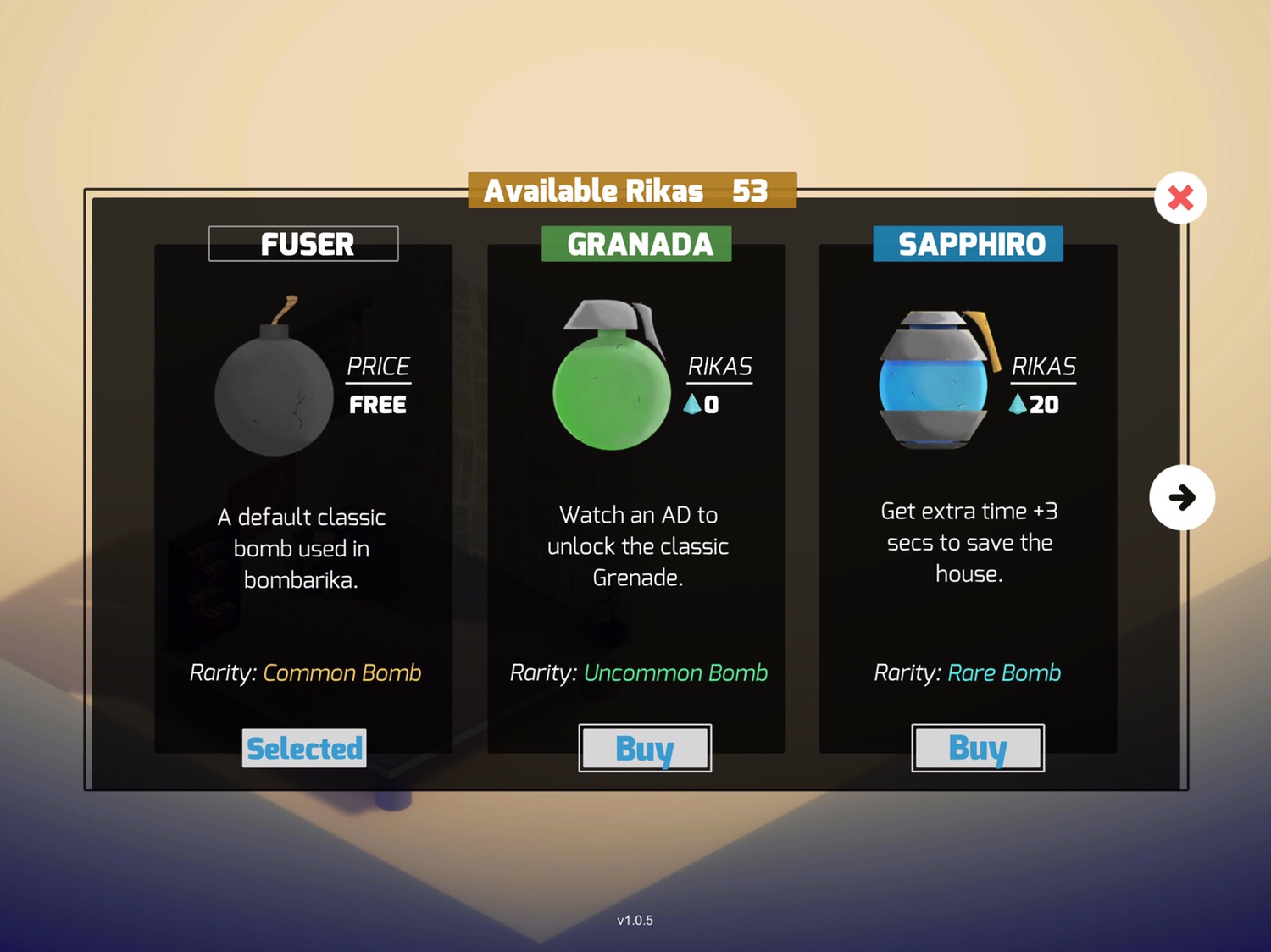 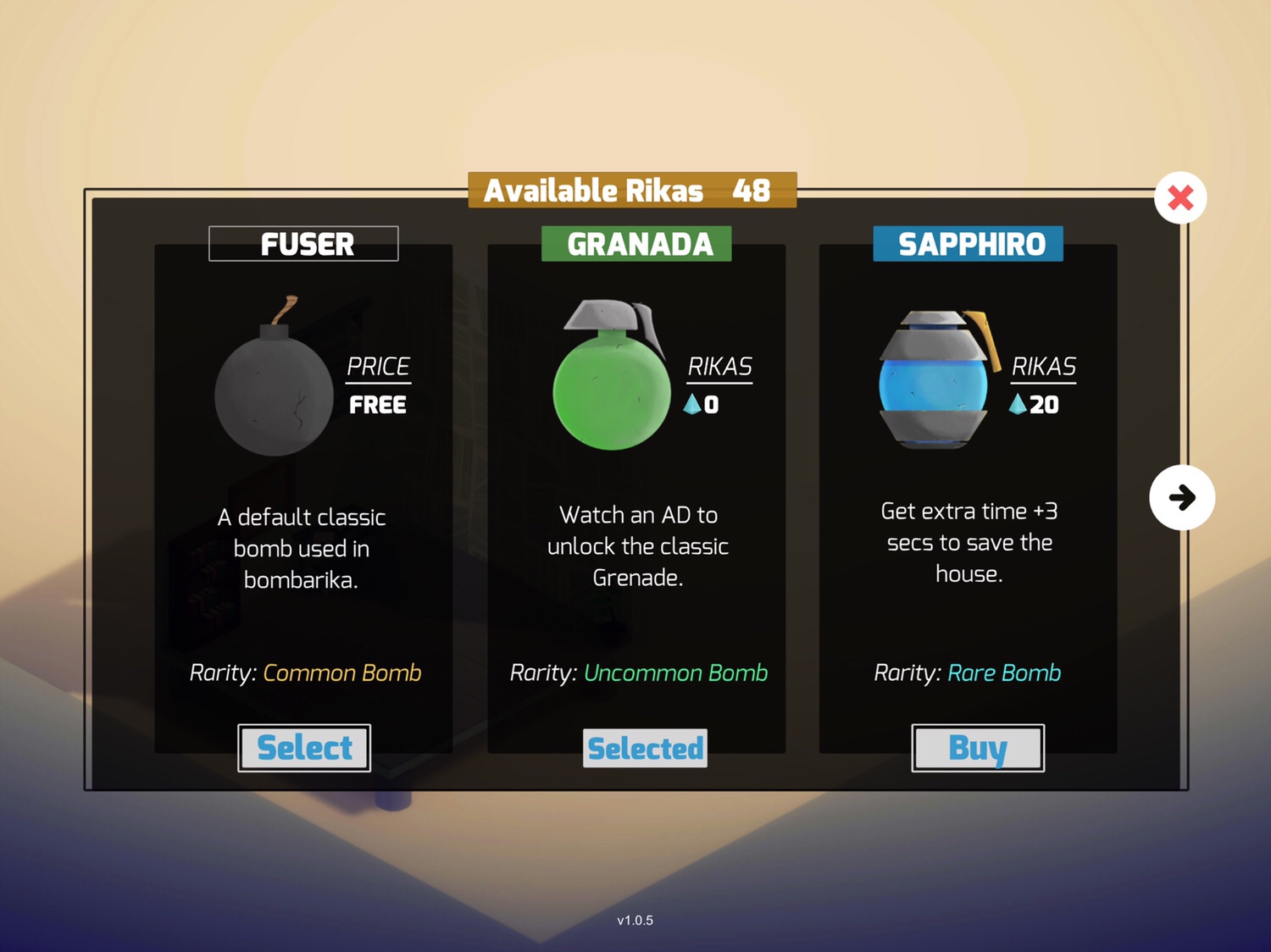 Notice the bombs have rarity, too, which is kind of ridiculous since you don’t actually find them anywhere. You buy them. That’s it. Neither one is rarer than the other, just more expensive. Good grief! There’s a kernel of a decent game here if the bugs and physics are fixed, some things are simplified, and all the ridiculous free-to-play shenanigans are done away with. Maybe I’m being too hard on a game that only cost me $0.99, but it’s the principle of the thing. If I’m giving the developer money up-front, there’s a certain expectation that comes with it. Quite simply, I don’t want to pay for a free-to-play game. If BOMBARIKA’s not already free by the time of this writing, I expect it will go permanently free at some point in the future. So if you’re even mildly interested in it, maybe wait for that. I don’t think its current state is worth even $0.99.

Sale: God of Light for iOS is currently FREE!