Ever since Monument Valley came along, I’ve been on the lookout for new games that play with perspective. There have been a lot of them, though few really hit the mark. There’s usually something that just weighs down the whole experience and keeps it from being a truly great game. .hocus felt sluggish and unresponsive to me and I lost interest in it pretty quickly due to the repetitive nature of its puzzles. Aurora had a lot of things going for it, but it got bogged down with elements that seemed like they belonged in a free-to-play game. The UI was also cluttered and led to me accidentally using hints. But you can read more about that in my review. Most recently, I took a gamble on Logic Path and liked the idea of it but the controls left something to be desired, especially on a small iPhone screen. So my point is that I’d started to lose faith in perspective puzzles and wasn’t even sure I wanted to try the latest one called Perspecto. But what kept me from ignoring it is the fact that it’s by Gamezaur, the company behind two match-three games I adore, Rings. and Sticks. It turned out to be a superbly crafted puzzler that feels great on an iPhone, so I’m glad I didn’t let it slip past me.

At first glance, Perspecto might not seem like much. Similar to to the fantastic Dissembler, the shape in front of you just looks flat and abstract, nothing too exciting. But when you start rotating it, you can see it’s actually a three-dimensional shape with six sides. The colors inside it are made up of cubes, which I admit are still not that impressive visually. But luckily, the game makes up for that with its tricky and satisfying puzzles.

In each of its ninety levels, you’re shown a small image at the top. The goal is to get the object in front of you to match that image. The catch is that you’re playing with perspective and each time you rotate the whole object, you’ll see it from a different angle. Some of the cubes inside it are fixed, but others can be moved around in different ways, depending on their behavior. The idea is to move the cubes and change the perspective so that together you get something that looks like the image above. As new kinds of cubes are added, the puzzles become more complex and can get dastardly difficult. 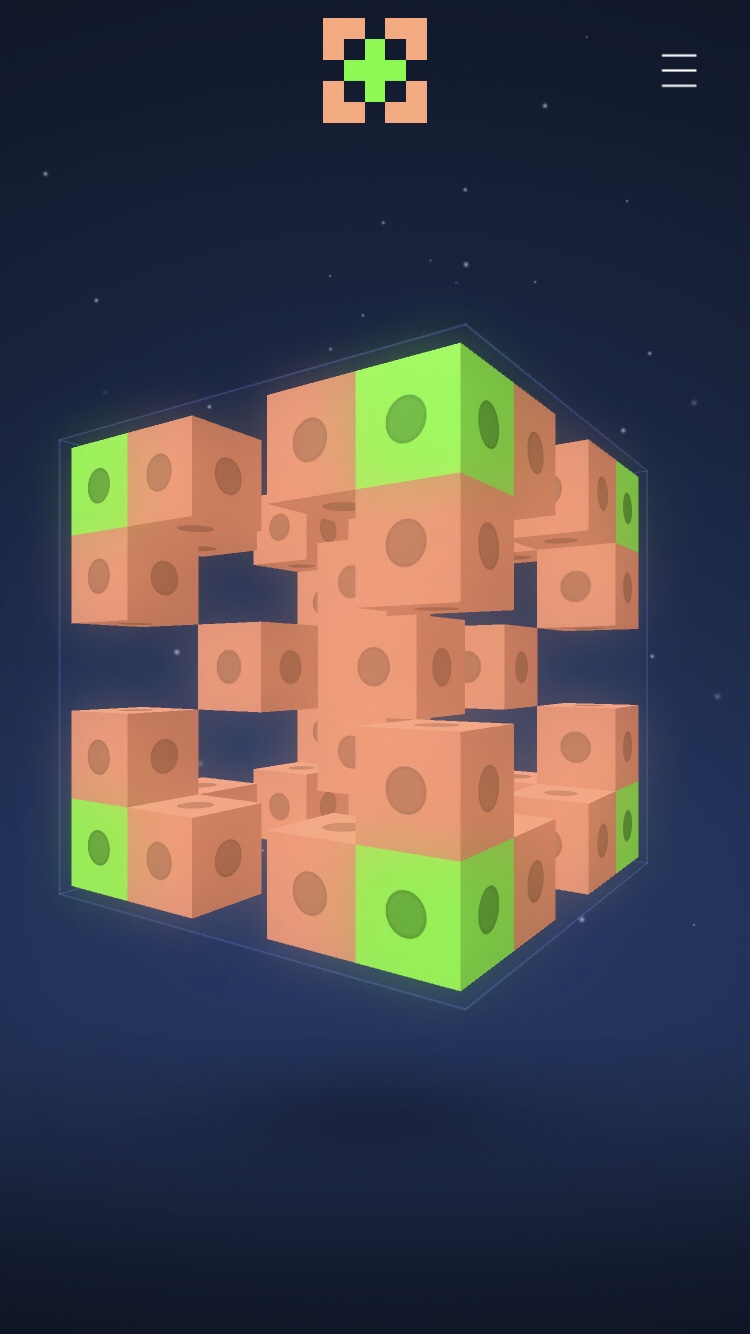 For instance, you start off with a cube that can only be swapped with other cubes. The only way to move it around is if another cube is next to it that can be moved. But remember, we’re dealing with perspective here, and even if two cubes are not really next to each other, you can swap them as long as they appear to be. If you played Monument Valley, you should be familiar with the idea. Later on, you’ll get cubes that can be moved around to any empty space or swap with another movable cube. Those are perhaps the friendliest cubes and the most useful. But things really get tricky when you add sliding cubes and gravity cubes to the mix. If you’ve played sliding block puzzles like Friday the 13th: Killer Puzzle, you should be familiar with the sliding mechanic. Basically, you can move those cubes into empty space, but they only stop when they hit an obstacle like a wall or other cube. So you can’t just fling them around wildly and hope they’ll end up where you need them.

The gravity cubes are especially troublesome because they drop if nothing’s directly below them. This means you have to be careful even when rotating the whole structure to see a different perspective. Luckily, a rotation isn’t set in stone until you release your finger from the screen, so it’s possible to take a peek at other angles without getting stuck in that position and possibly ruining the pattern your were working on. By far, the gravity blocks are the most challenging to work with, and there was the occasional puzzle where I wasn’t sure I would get past it. Luckily, I eventually worked it out, but it would have been helpful to have a way to skip a puzzle or two in those situations. 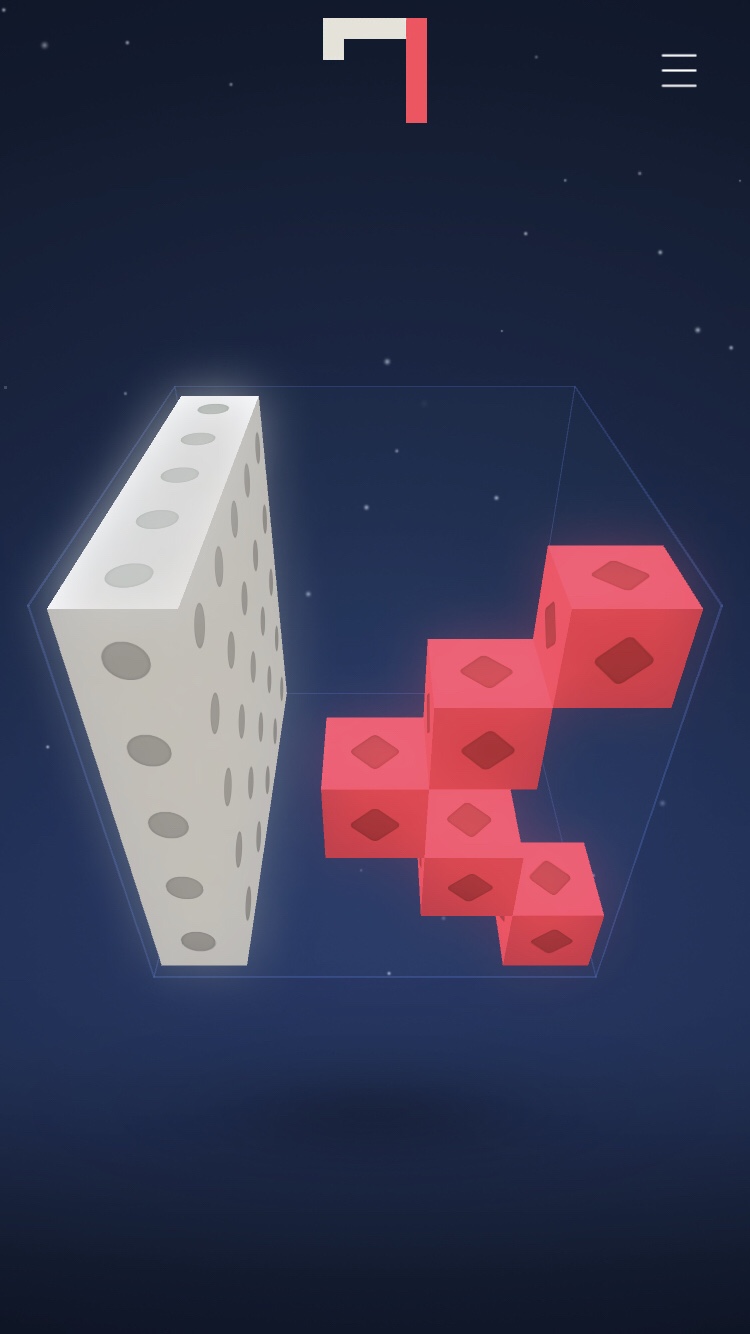 Overall, the controls feel pretty near perfect for a touchscreen. A swipe anywhere on the screen registers as a rotation of the entire object, unless you’re touching a cube that can move and you’re swiping it in a direction that’s acceptable. If you try to move a cube in a way that’s not possible, it will just rotate the whole object instead. It’s a control scheme that works well and also allows the the screen to be clutter-free. The only thing you’ll see besides the puzzle is a little symbol in the corner for the menu, which is where you can select another level or restart the one you’re currently on. I’m a big fan of this kind of clean interface, and it kept me focused on each puzzle without any distractions. It also helps that I didn’t encounter any lag or other issues on my iPhone. It’s quick to restart or get to the next puzzle, as I never felt like I was waiting for silly animations to play out. I should mention, though, that on my iPad I sometimes have trouble moving the cubes and it takes more than one swipe to get the job done. I’m not sure why that is, but hopefully it can be fixed in an update. 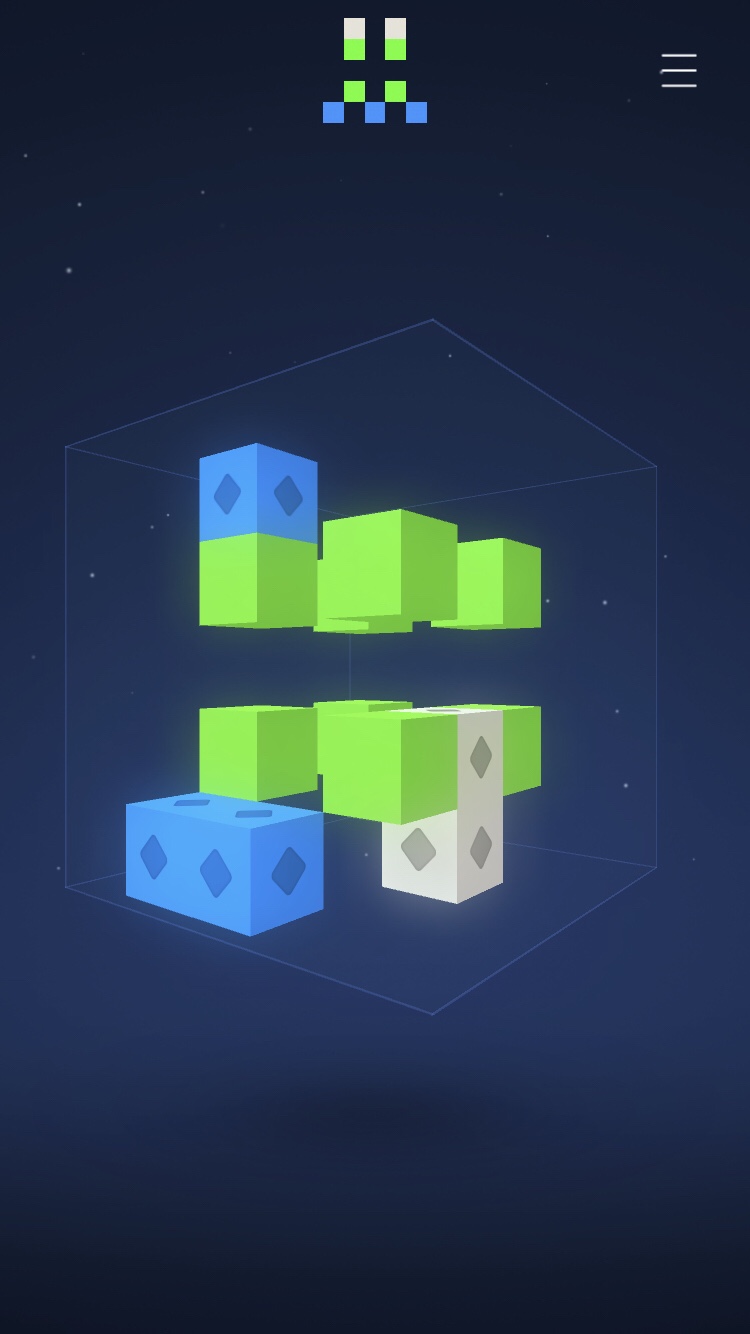 Perspecto is one of those games that I couldn’t put down once I started. I didn’t really have the highest expectations for it, due to being disappointed with other perspective puzzles, but this one is the real deal. It’s a simple concept, but it builds on its mechanics gradually so no two puzzles feel alike. Each one presented a new challenge and I often felt like a genius when I solved them. Not to mention, it can easily be played with one hand in portrait mode wherever you are. It’s exactly what I look for in a puzzle game. Sure, it might not be as pretty as Monument Valley, but the clever design makes it very much worth your time. So if you’re ready to look at things from a different angle, grab Perspecto here and get your mind warped.

And if you get stuck on any of the puzzles, try my walkthrough guide.