These day’s I don’t really have much patience for huge open world games, especially multiplayer ones. I like playing games on my iPhone because I can take them anywhere and play a few minutes at a time, as long as a game is designed well for the platform. Despite that, I can’t really turn down a chance at taming and riding dinosaurs, so I decided to give the new mobile port of ARK: Survival Evolved a try.

I spent a good portion of my first hour messing with the character creation screen because it gives you so many options. I mean, you can’t have purple hair or anything like that, but you can have super long legs, a tiny head, or a giant butt. You can make yourself look very freakish if you so desire. Also, you’re incredibly dirty no matter what. Once you’re happy with your appearance, you’ll get dropped on an island populated with dinosaurs and some weird glowing tower in the distance. You also have some strange chip embedded in you, so I’m guessing this is some Hunger Games-like thing or Survivor, where the person who lasts the longest wins. I’ve so far only played single player, and I don’t know if I’ll ever feel like joining multiplayer, but for now I’m having fun just doing my own thing. 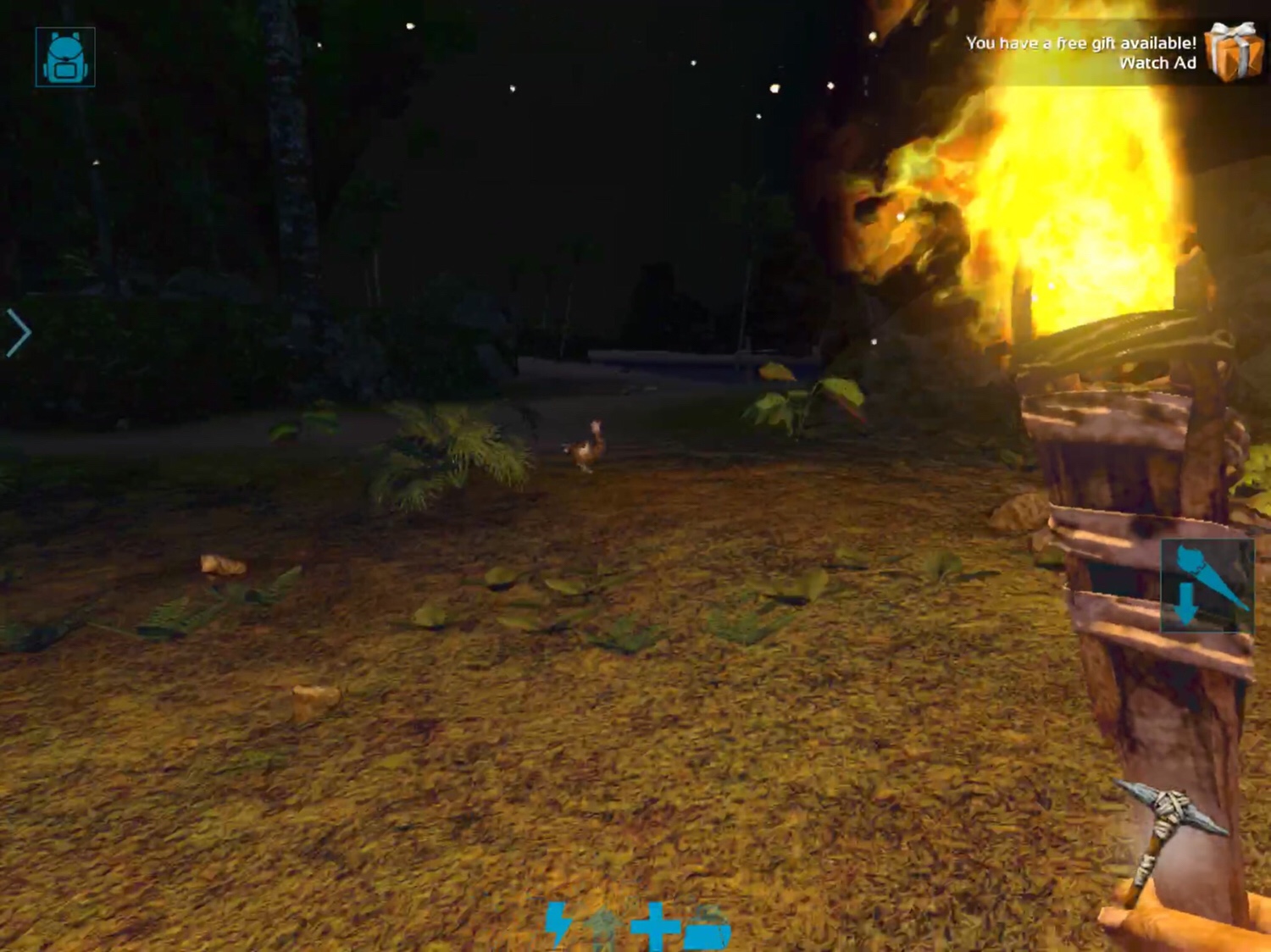 You start off with nothing but that chip in your arm and the in-game guide instructs you to pick up some stones and punch a tree to harvest things from it like wood and thatches. You have some very basic crafting skills, so you can fashion together a little pickaxe using some loose stones and wood. Once you have that, you can mine rocks and break down trees faster. It also acts as a more effective weapon than your fists. You can gather berries from bushes and eat them to fill your belly, then drink from the lake to quench your thirst. Oh and you’ll also poop. A lot. I guess the game really wants to be realistic. I haven’t figured out how yet, but you’re supposed to be able to use your feces as fertilizer to grow plants. Oddly enough, the sound effect to open the inventory also sounds like a fart to me. The sound effects in general can be very odd. Even the music — it’s mostly quiet but will randomly start music like I’m in a horror movie. I then expect something to attack me, but there’s nothing there. I’m not really sure why it does that.

Much of the early part of the game — or maybe the entire game — is about gathering resources, learning more crafting skills, and crafting items. I started building a home but got tired of walking back and forth with all the materials. Since I’m still a low level, I can only carry so much, and my pockets fill up too quickly to craft everything all at once far away from home and then build the house. So I may have abandoned that part of the game, at least for now. 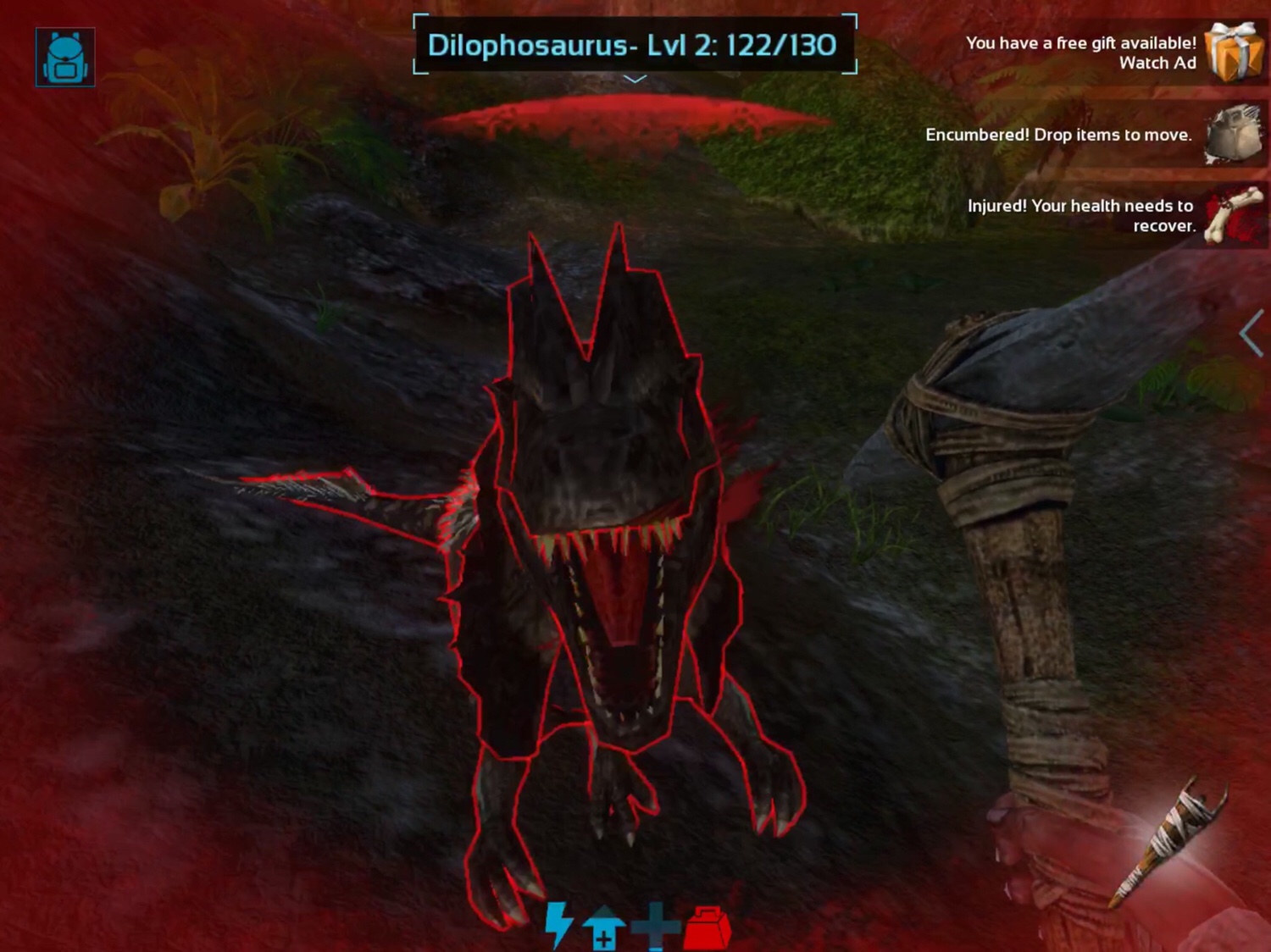 Since I’m playing single player, there are no other people around, but there are plenty of creatures. Besides dinosaurs, there are plenty of cute little dodo birds. The first time I met a dodo, I wanted to befriend it, but accidentally punched it. Then I felt bad and avoided them altogether for a while. Then I finally decided I should probably kill something and a dodo seemed to make the most sense. Then I felt awful for killing a dodo. But the second one was a lot easier to kill. I learned that I much rather kill creatures that attack me first, though.

I later learned how to tame a dinosaur, and he became my friend. But I wasn’t sure how to get him to do anything besides follow me and eat. And when I got attacked from behind by some little poisonous runt, I couldn’t see anything and he didn’t protect me, so I died. When I came back and found my corpse, he was still waiting by it, but then disappeared about five seconds later. I managed to find more like him later, but then I excitedly picked up an pterodactyl egg and got killed by its parents. I’m still not sure why I can tame some docile dinosaurs but not others. He’s level 24, but I saw plenty of lower level dinosaurs that didn’t attack me but couldn’t be tamed. That was always disappointing. 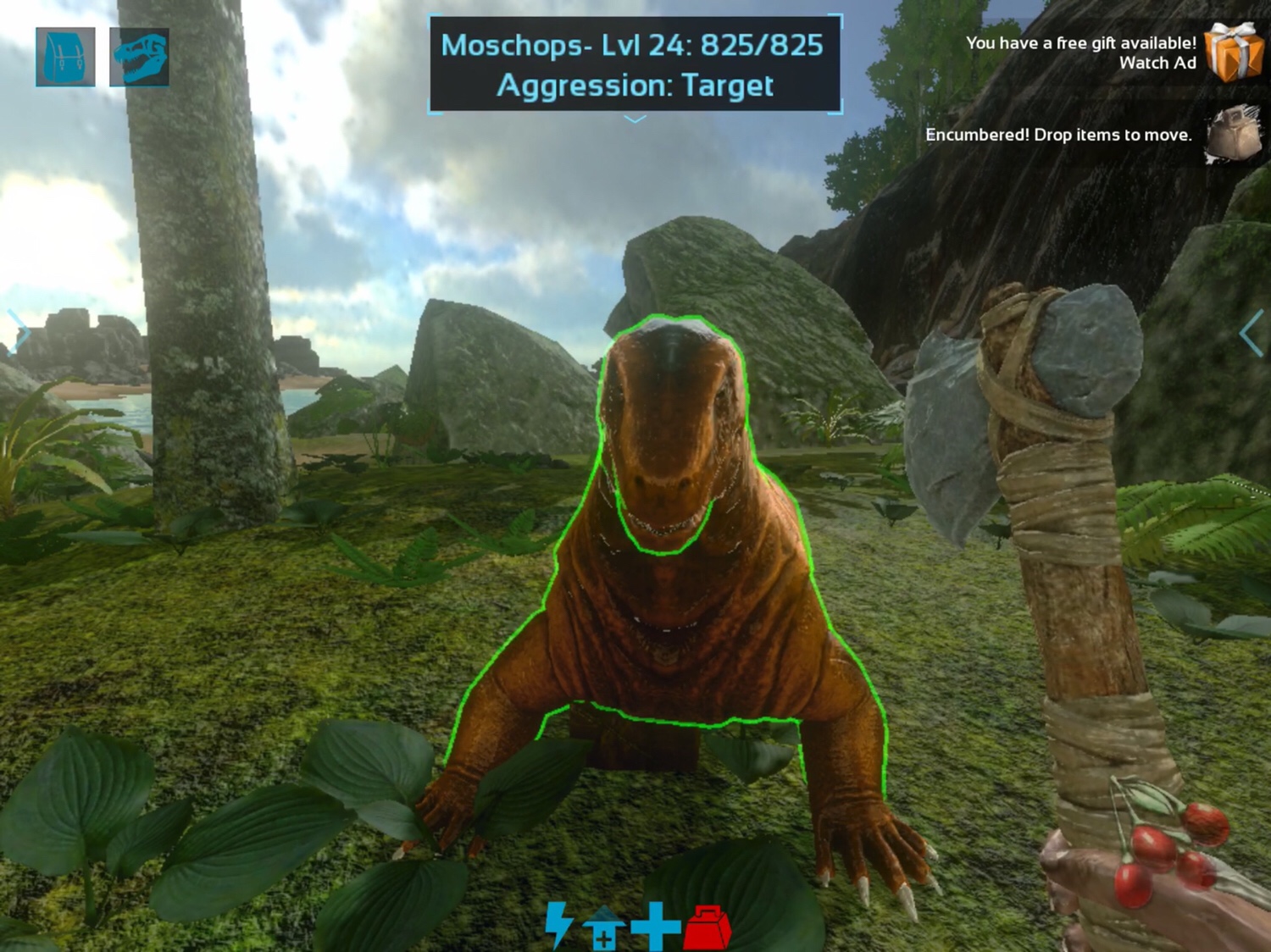 For a free-to-play game, it’s been pretty user-friendly so far. I haven’t felt pressured to buy anything, thought there is a “free gift” prompt in the corner of my screen that I can’t get rid of until I watch an ad for it. That said, I’ve only spent a few hours with the game, so I’m not sure if the monetization gets more aggressive later. For the moment, I’m still progressing despite several deaths. I do wish the game offered more instructions, though. I feel like I’m at a standstill, where I can craft and kill small animals, but what’s the end goal? I have no idea. I don’t really feel like I have much of a goal besides the one in my head of riding a flying dinosaur.

I also find it a little tiresome every time I die to have to go fetch my items from my corpse. The game spawns me randomly each time, and the last time it dropped me in the middle of a group of poisonous dinos that made short work of me. Another time, I got killed by an alligator-like dinosaur and every time I tried to get my stuff, he’d kill me again. It’s a bit exhausting. Plus, it’s a very time-consuming game. I feel like I could just walk around a forest and collect berries in the same time it takes me to do it in-game. Sure, chopping trees goes faster than in real life, but there’s just so much of it. It starts to feel like a massive waste of time. All I want to do is ride dinosaurs and I don’t even know how to get to that point without doing all the menial tasks first. So at this point, I’m not sure I’ll continue playing. But if you want to see my progress so far, check out the gameplay videos below.