I usually ignore golf in almost every form. I don’t understand folks who enjoy watching others play golf, but I do like playing miniature golf myself, even if I’m not all that good at it. When it comes to video games, I’ve tried a bunch of them and none have really stuck for me. Even the gorgeous Wonderputt just felt awkward to me. So I didn’t know whether I would enjoy the new Golf Club: Wasteland by Demagog Studio, but the artwork and sales pitch were too hard to ignore. So here I am, about to sing praises of a golf game, one that’s super chill while also offering a challenge for those who want it.

I knew from the moment I saw Golf Club: Wasteland‘s disclaimer and its “stick a golf club up your ass” that it would be a memorable game. It takes place in the future, after all the ultra rich folks moved to Tesla City on Mars (yes, there’s satire and social commentary here), leaving everyone else to just die off. Sometimes, Mars citizens take trips to Earth and play golf among its ruins. You play as a Mars mission pilot who doesn’t fit in with the rest of Martian society, so he takes one last trip to Earth to play golf. While there, he listens to Radio Nostalgia from Mars, which features about an hour’s worth of original songs and stories from people reminiscing about life on Earth. You also get glimpses into life on Mars through the radio announcements and product advertisements. The game on its own is well worth playing, but its this soundtrack that, for me, places it in the must-have column. There are stories from people that shine a light on our own faults as a society, but everything is done so well and so tastefully that it feels authentic and never forced. There’s a full cast of characters of different nationalities and accents, so you really get the sense that you’re listening to a real radio station with live callers. It’s so good, in fact, that I’m considering buying the soundtrack on iTunes so I can listen to it when I’m not playing and focus on the words. 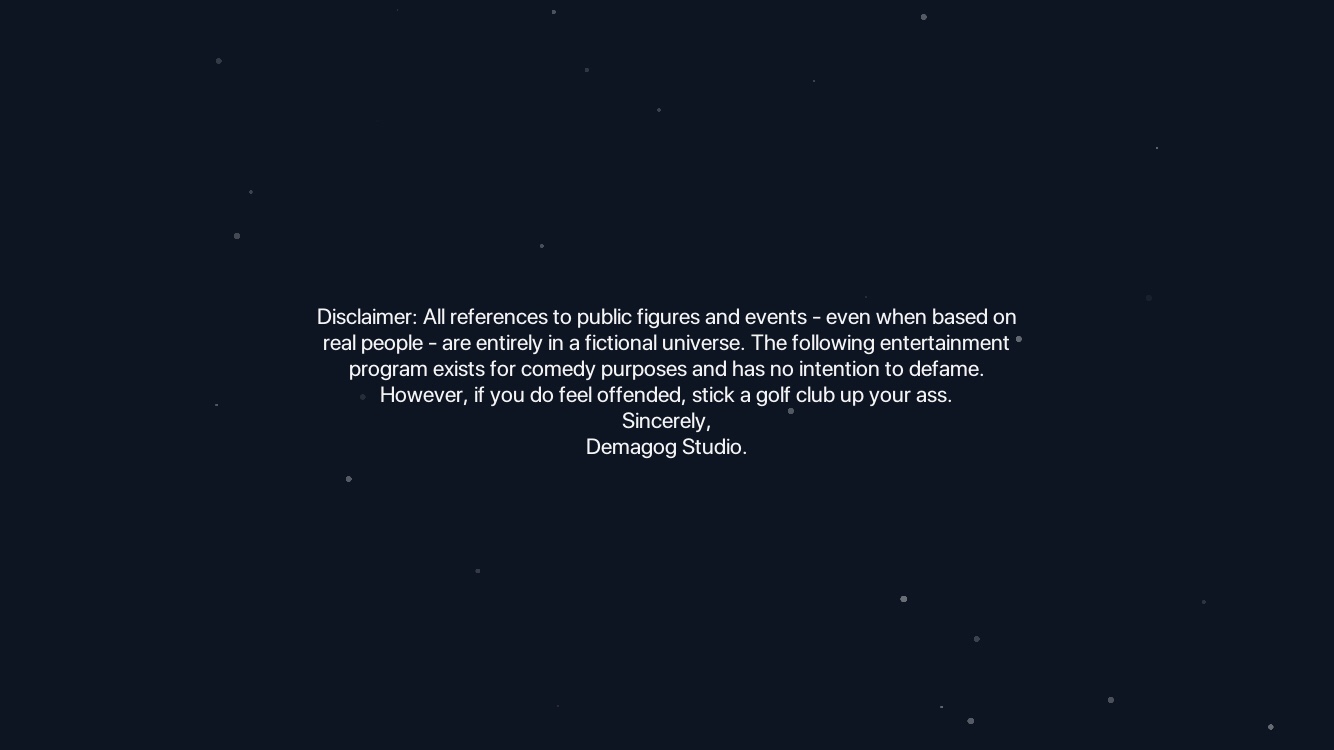 The artwork is another standout aspect of the game. Without it, I’m sure I would have ignored it completely. It’s clean and simple, but also incredibly lush and detailed. It captures desolate landscapes and remnants of past civilization with subtle beauty. There’s a hazy static over everything, encapsulating that post-apocalyptic feeling. The game lets you pan the camera around while you’re playing, mostly to plan out your shots, but I highly recommend doing so just to take in all the details of this world abandoned by humanity. There are even some not-so-subtle signs and graffiti that mock some notable figures, as you may have already guessed from the name Tesla City. 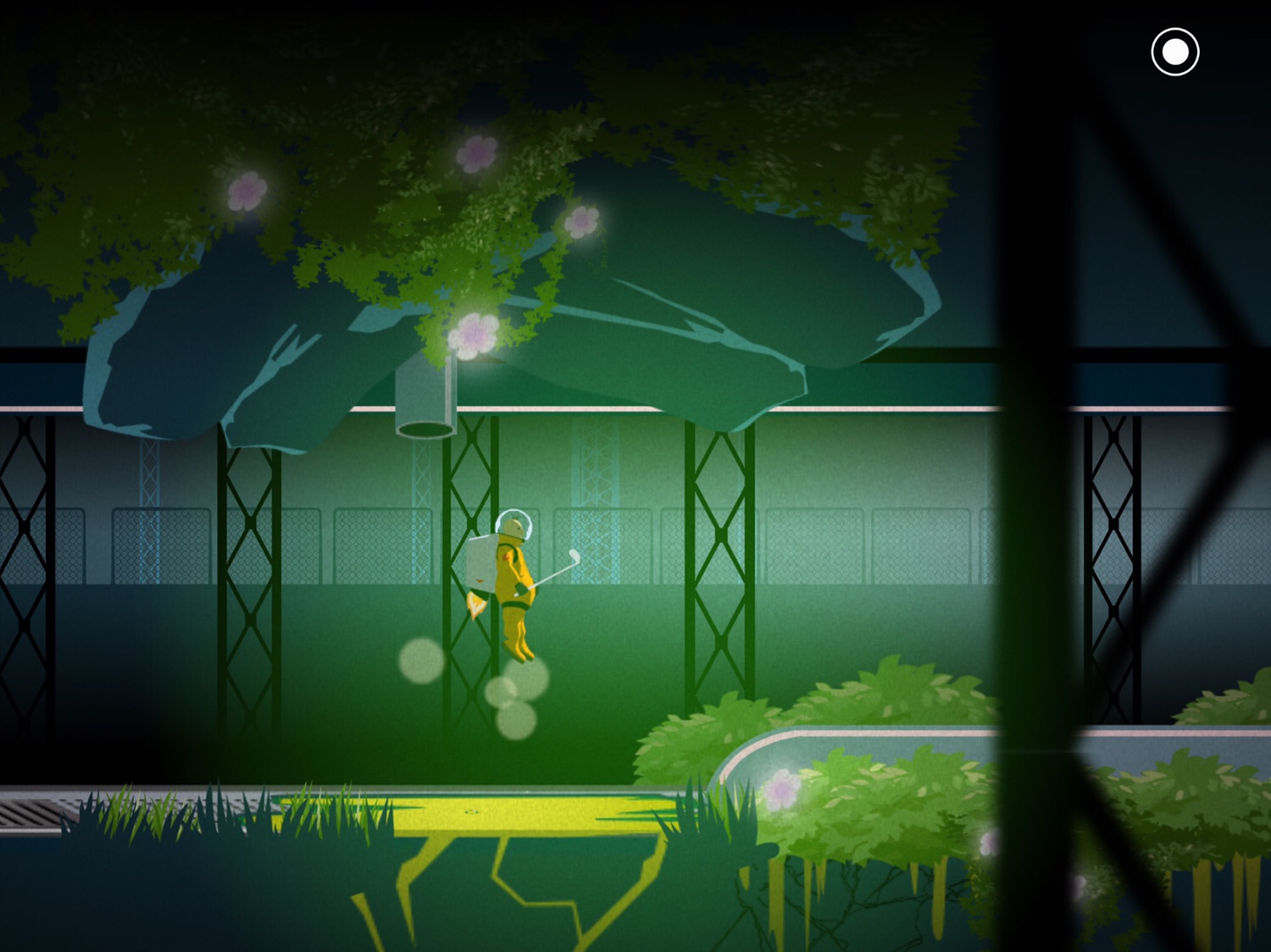 Let’s talk about the gameplay, since this is a game after all. The controls couldn’t be any simpler. You press and hold anywhere on the screen and then pull back in the opposite direction you want the ball to go. An arrow lets you know how strong your hit will be and in what direction. When you’re satisfied with the arc, just release your finger to hit the ball. If it lands somewhere in-bounds, your character will fly or walk over to it and get ready for the next hit. If it lands in water or down a bottomless pit, he’ll stay put and you’ll have to try again, but the lost ball counts towards your score. Obviously, it takes some practice to get familiar with it enough so you can try and predict where the ball will land. I’m still not the best at that, even after playing through the whole game and replaying some levels to improve my score. But you should get better at it over time. The eventual goal in each of the thirty levels is to get the ball in the hole, just like any other golf game. 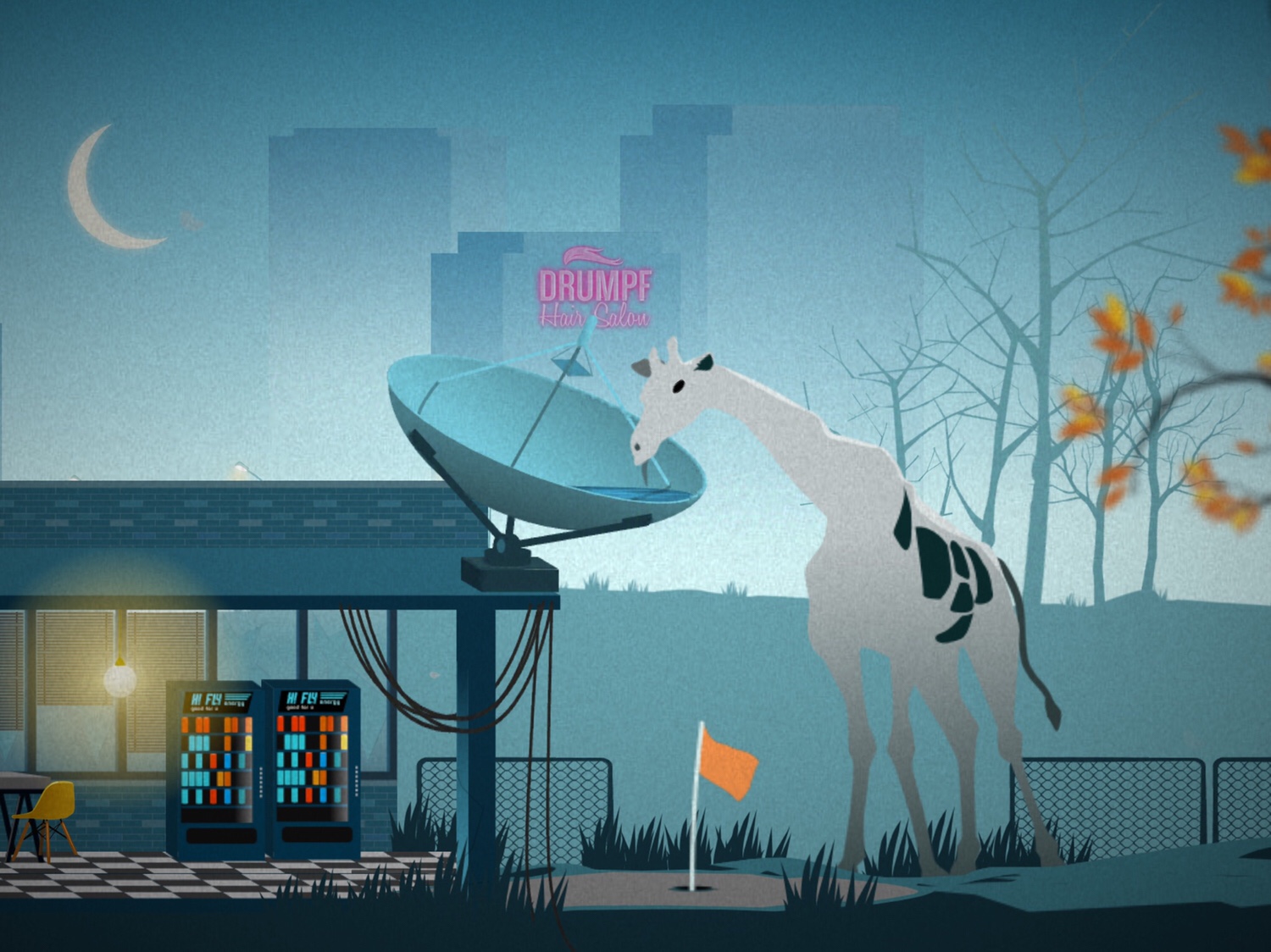 I really appreciated the chill and laid-back feeling of the game, at least on my first playthrough. It doesn’t even tell you you’re being scored. There’s no obvious indication how you did on a specific level, no congratulations for getting a hole in one or a scolding for making a lot of mistakes. I was able to just enjoy myself while listening to Radio Nostalgia and taking in the sights. At most, achievements will pop up if you complete a certain number of levels under par or find some hidden secrets. It wasn’t until I started exploring the menu that I realized I was even being scored at all. Each level has a number of strokes to reach par, which you can ignore if you just care about getting through the game. But there are story bits that unlock if you complete levels in a certain number of moves. So I started going back and improving my scores and even impressing myself at times when I managed to complete some levels in the absolute minimum number possible. Going back through the game, some levels can be downright unforgiving if you’re trying to complete a level without making any mistakes. It’s providing a lot of replay value that I didn’t even realize I cared about. 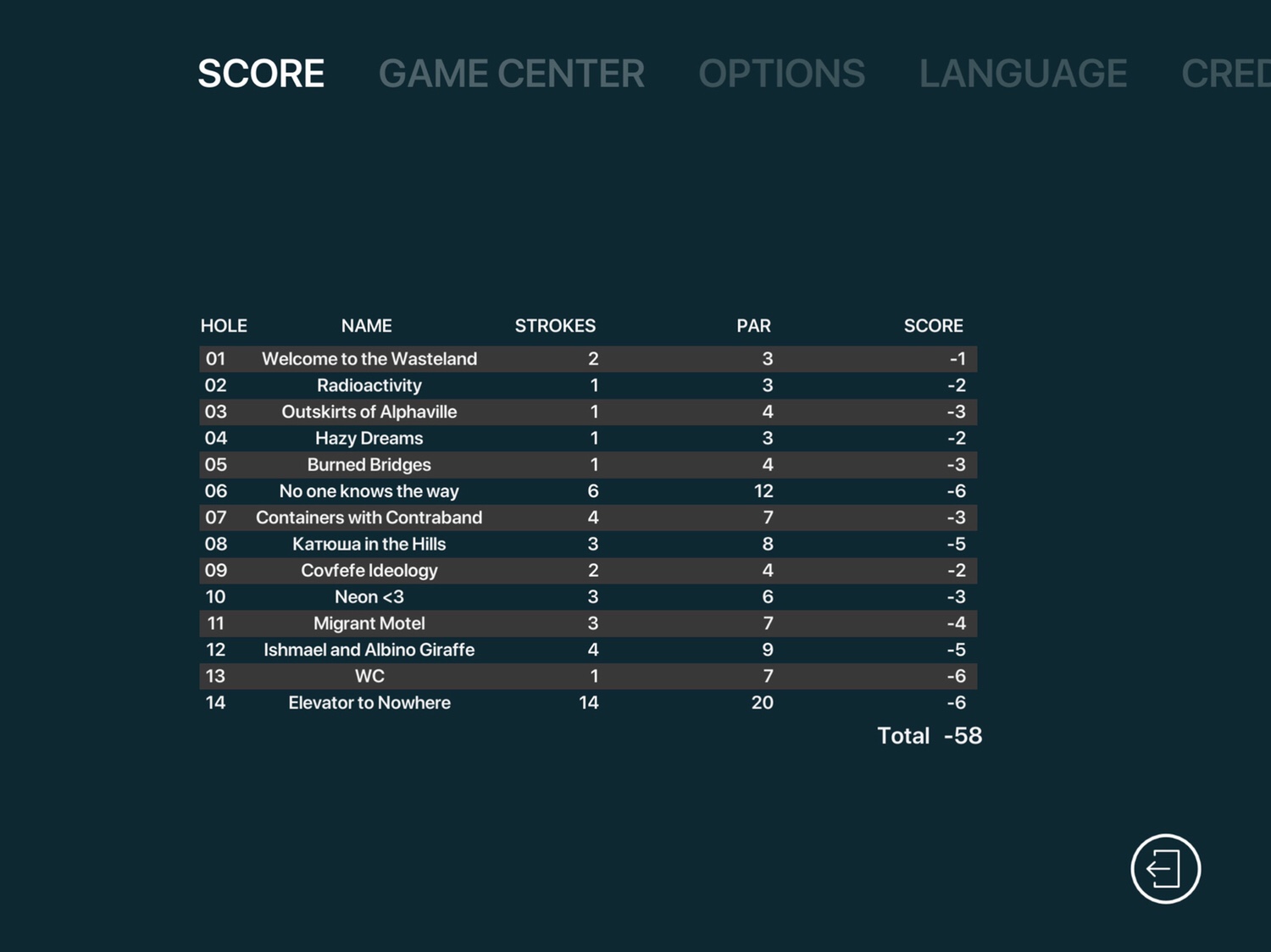 The level design itself is also very puzzle-oriented, which helped me warm up to the mechanics even though it’s still a golf game. If you look around, you can sometimes find shortcuts to use, like pipes that will bypass a good section of the level if you can hit it in there. You still may waste a bunch of strikes trying to do so. There’s also different terrain, like sand that reduces the force in which you can hit the ball. Other surfaces are extra slippery, making it harder to get the ball to stay up. There are windows to smash through, elevators and escalators to ride, and even a ball-munching cow. From beginning to end, the game continued to surprise and delight me with its obstacle courses, scenery, and, of course, the stories and songs coming through the radio. 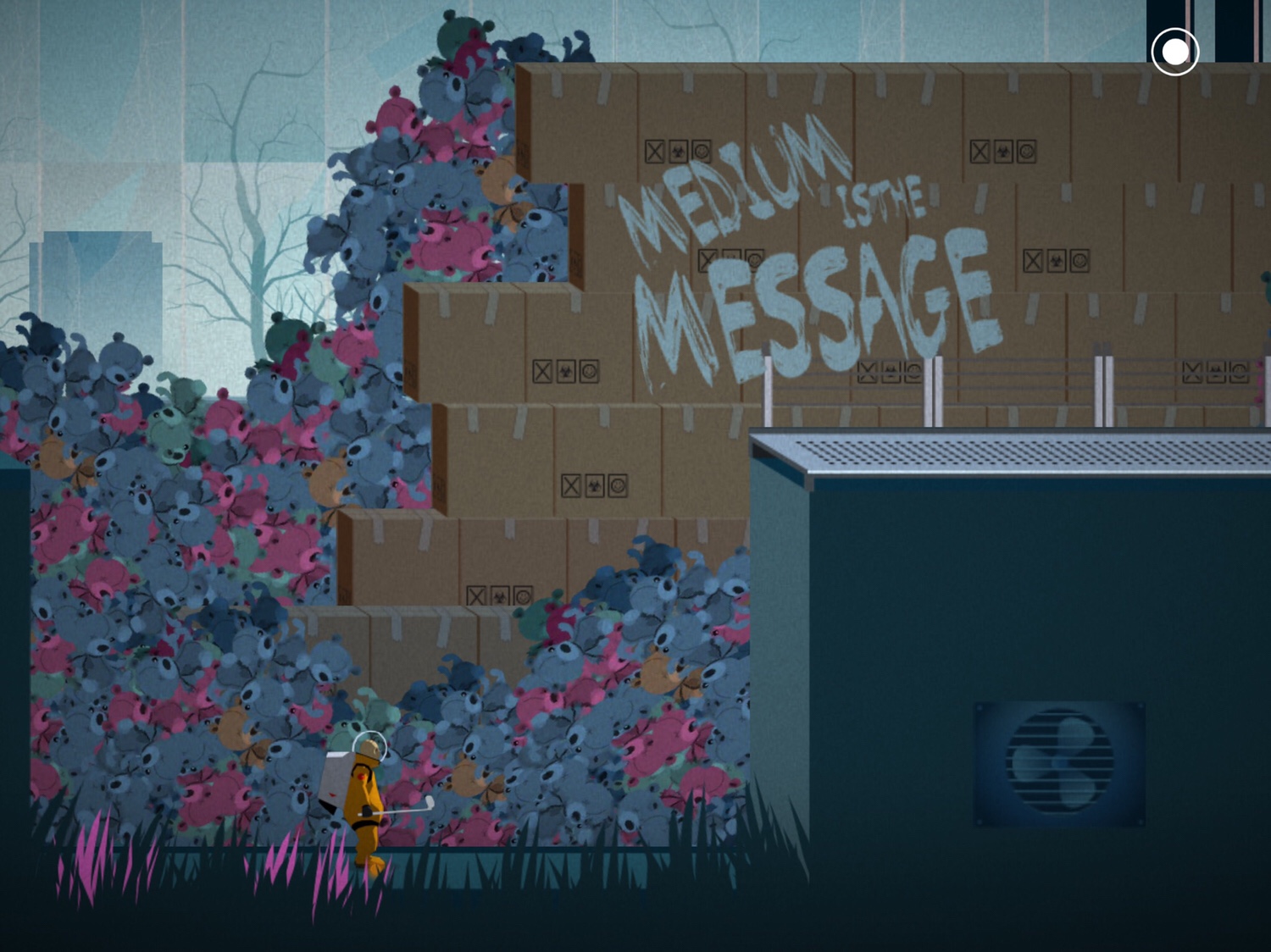 As much as I’ve been enjoying the game, I do have some minor complaints or requests for quality of life improvements. None of them were enough of an issue to deter me from the game, but would certainly make for a more polished experience. First off, I usually play games with the home button on my left, but the orientation is locked here so it’s on the right. Also, there’s no iCloud sync, so I’m stuck playing on either my iPad or iPhone instead of both. And last, the menu and user interface could use a bit more streamlining. When I’m trying to improve my score and want to restart after messing up, it takes a few seconds before it lets me do so. And takes a bit of shuffling through the menus just to see my scores, as does finding the story bits I unlocked. I would like to see a more simplified way of accessing my scores from within a level. Again, these are minor issues, but anything that keeps me away from the game for longer than necessary makes me sad. It would also be nice to know the absolute minimum number of moves you need to complete a level, as sometimes I try to shave off a strike but I’m not sure if it’s possible.

Golf Club: Wasteland is one of those games I would recommend to just about anyone. Even if you don’t think you like golf games, give it a chance. The chill atmosphere and and easygoing gameplay that only challenges you if you want it, make it an accessible game even for those who think they suck at golf. There’s also enough going on between the story, obstacles, the radio, and the whole atmosphere to make it worth playing even if golf is normally not your jam. There’s also a surprisingly moving ending that I wasn’t expecting, but tied up the whole package very nicely. If you’re looking for the next great game to play, I think you found it. So go download the game here and start hitting some balls.

And if you get stuck on anything, I have a walkthrough guide here.