Unavowed is the latest point-and-click adventure from Wadjet Eye Games. Unfortunately, it’s not on iOS yet, but I decided to cover it anyway. This is the sixth part of my walkthrough guide and will take you through the fifth case at Prospect Park in Brooklyn.

1. Go down and talk to Eli. He’s been scanning the knife again, now that he has the demon’s name. Go back upstairs to hear Logan and Vicki talking about Kalash’s death. When they’re done, head to the fireplace and talk to Mandana. When you’re done talking, have her call another meeting.

2. The demon Melkhiresa is at your old theater in Brooklyn, Under the Bricks. (If you’re a cop, it will be at Eternox Nightclub and if you’re a bartender it will be at Sammy’s Bar.) Get on the train. Once again, you have to choose who goes with you. I chose Mandana and Logan.

3. There’s a portal! Examine it and then pick up the papers off the floor. It’s your handwriting! And it’s all the plans the demon laid out. 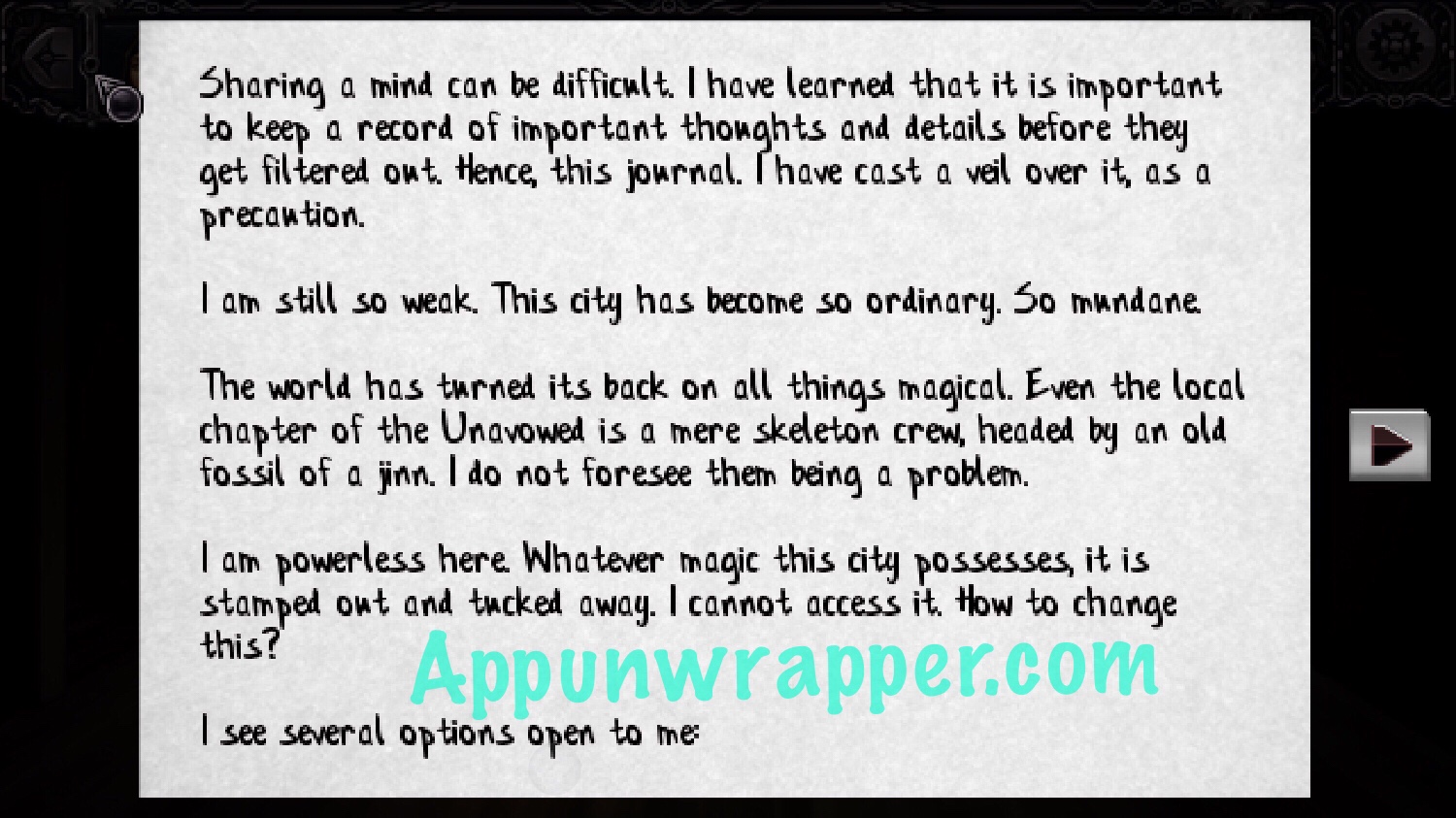 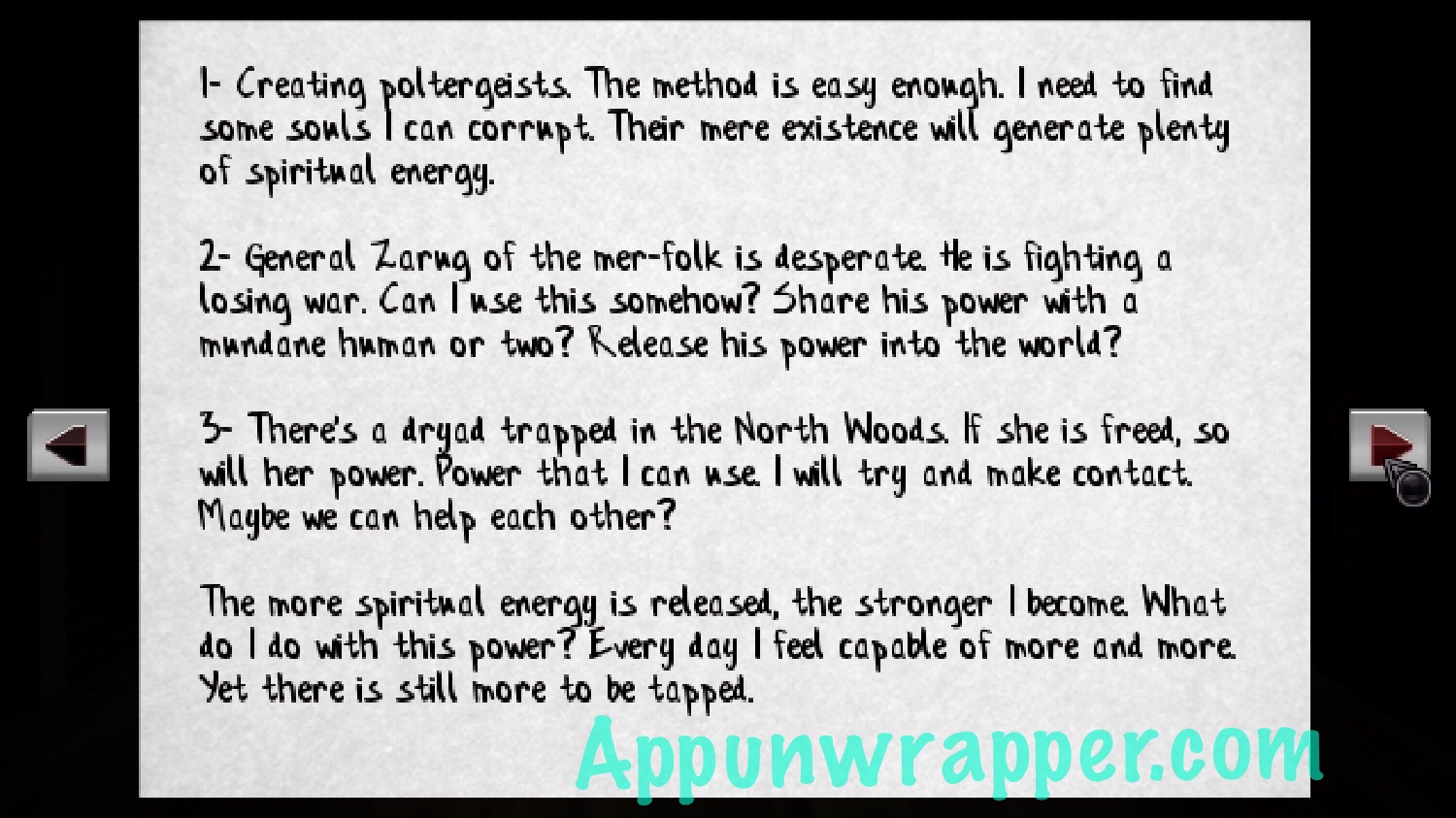 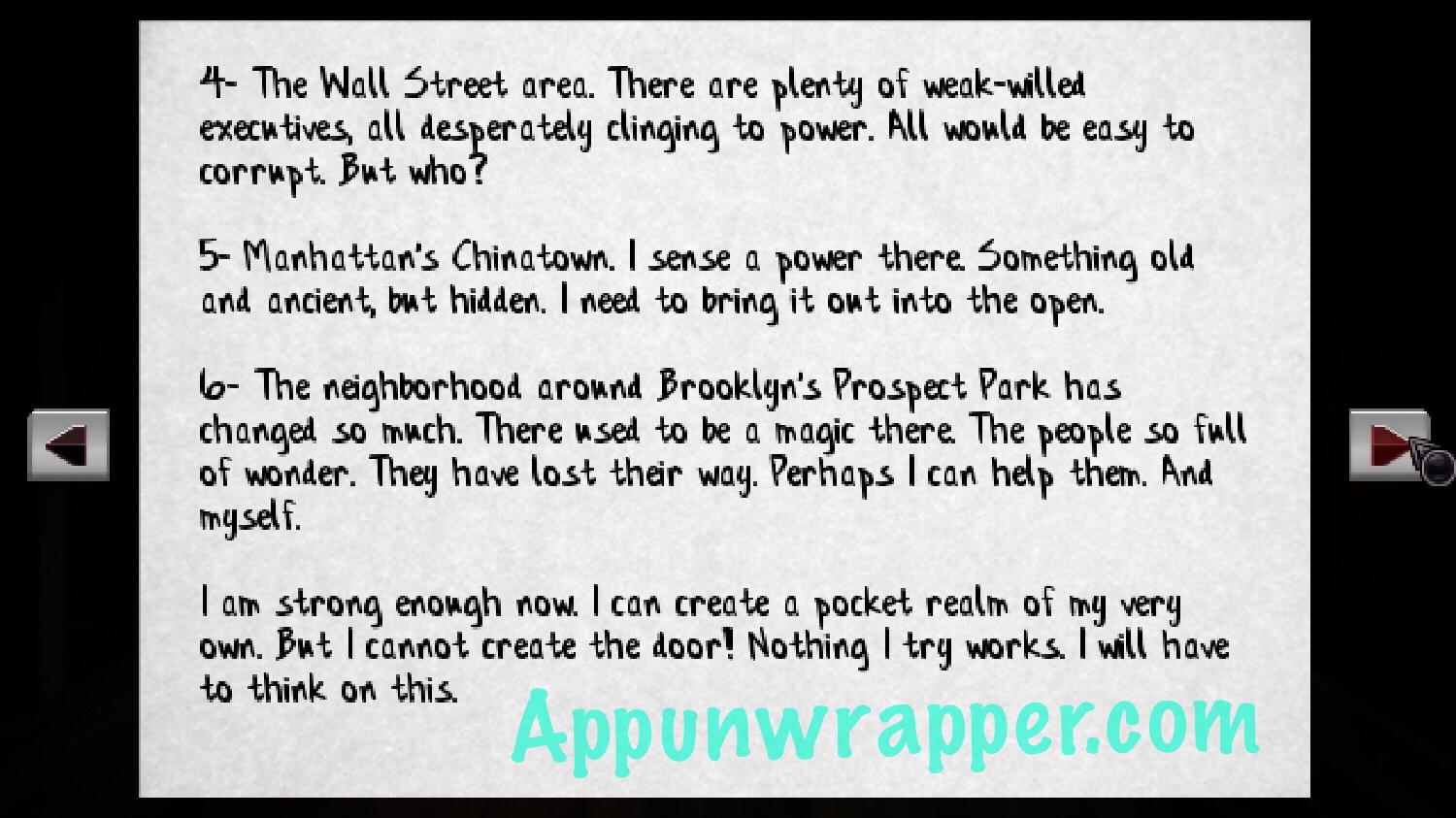 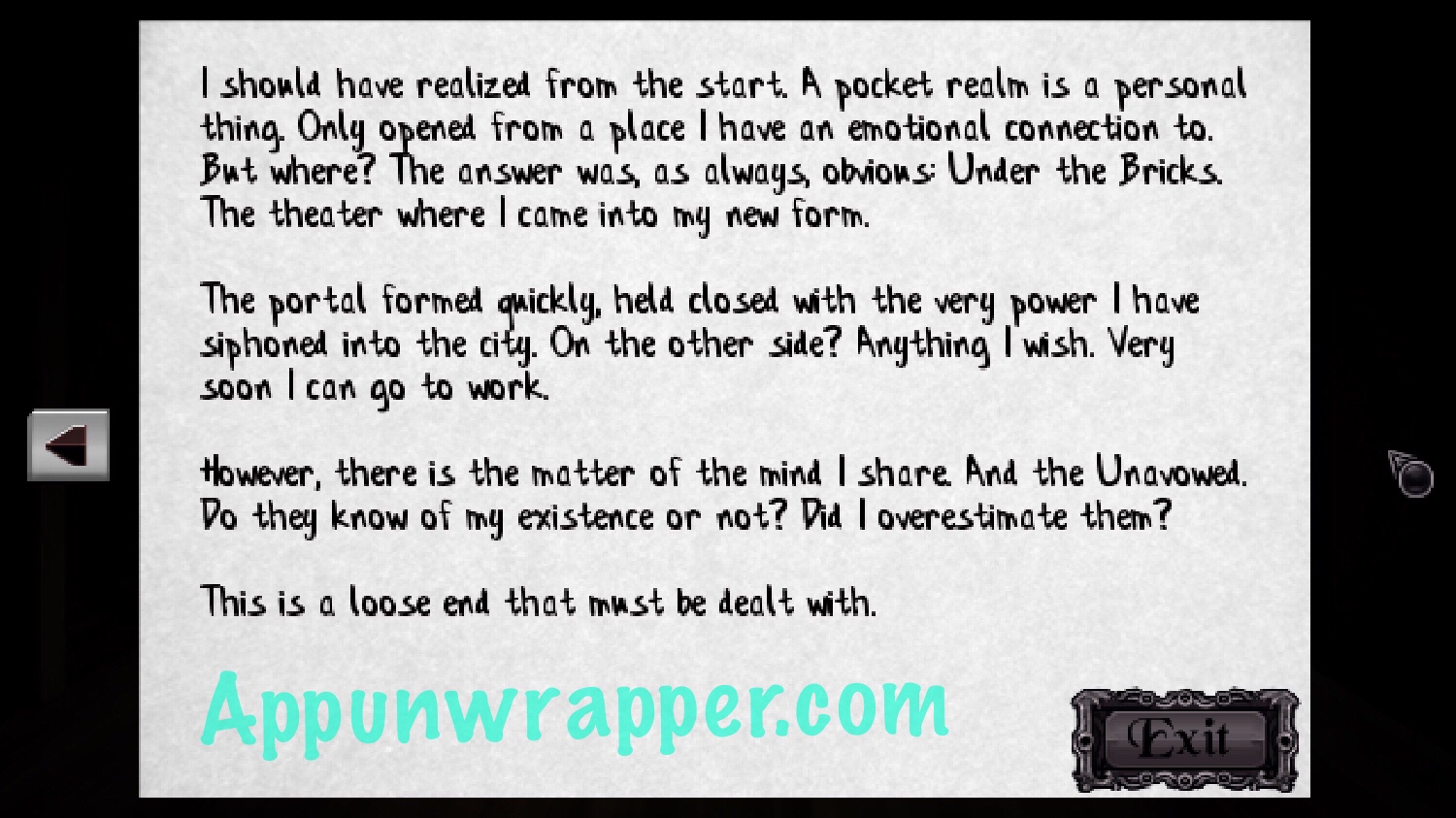 4. Leave and get back on the train. Get off at the Hoyt-Schermerhorn stop in Brooklyn first. I chose Logan and Mandana, but I’ll show you how to get through it with the other characters, as well.

5. Head left to the poetry slam. Head inside. There’s a woman on stage reciting poetry. Interrupt her. She knows Mandana (or Aldin, if you’re with Eli)! It’s Calliope again! Chat with her. It turns out she’s not a muse anymore. Some woman stole her powers. Find out what you can from her and then leave.

6. Go back to the subway station and cross the street to head south to Prospect Park. It’s easy to miss, as you have to click on the zebra lines. 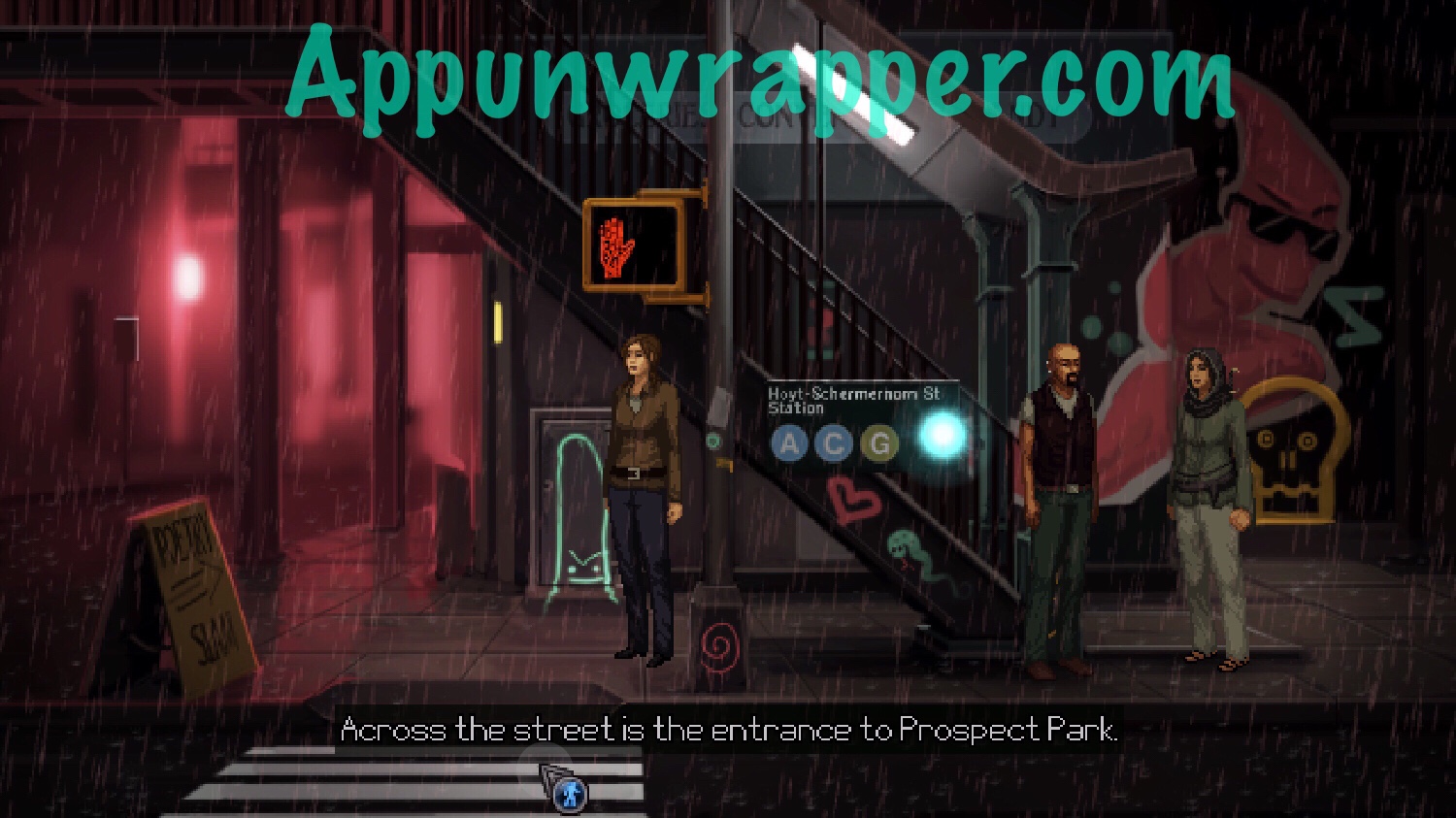 7. Talk to the mother and daughter, May and June Stein, and then head to the bandshell inside the park. Another vision! It’s of you taking Calliope’s powers.

8. Use Mandana to climb up the sculpture and grab the piece of leather. You’ll also get a thin metal stick. Look at the leather. The initials AF are stamped into it. (Don’t worry about this if Mandana isn’t with you.)

9. Have Logan talk to the ghost. He’s not very forthcoming with information, so we’ll have to come back to him later. (Again, don’t worry about this if Logan isn’t with you.)

10. Head back to the train. Head right and enter the bakery. Talk to the cop about the death at the amphitheater. Someone lit themselves on fire on top of the sculpture. He says artists have been going crazy lately. (If you have Vicki with you, he’ll tell you the guy had an ID that got burnt to a crisp.) Then talk to Clay Chipman and ask for a psychedelic bagel. He doesn’t know anything about the death, so leave.

11. Head right and talk to the old man. He’s an artist named Stanley Bates. Chat with him about the sculpture and death in the park.

12. Head back to Calliope and chat with her some more. She says she can read any work of art. Give her the bagel to read. She’ll try it and say that Chipman was inspired by her to make it. But it wasn’t her, so someone else inspired him. Also give her the metal from the sculpture (only if you have Mandana). She won’t tell you much about it, though.

13. Go back to the park and talk to May again. Then enter the park and talk to the ghost again (only if you have Logan). He says he burned a journal. The leather is part of the journal! Keep prying. He’ll tell you about the hands of he angel. He painted the angel mural by the poetry slam!

14. Head back to the poetry slam building. Don’t go inside. Instead, have Mandana climb the drain pipe and then use the metal stick on the angel’s hand. There’s a piece of jewelry inside! It’s a horse necklace that says MA + AF on it. I like how the angel wings behind it make it look like Pegasus. (If you don’t have Mandana, skip this step. Instead, head to the subway and ask Eli to fire read the ID for you. It says Amos Fennel and he’s from Illinois. So go back to Diego the cop and ask him about Amos Fennel. He was May Stein’s ex-boyfriend! You’ll also tell him Amos is the burn victim.) 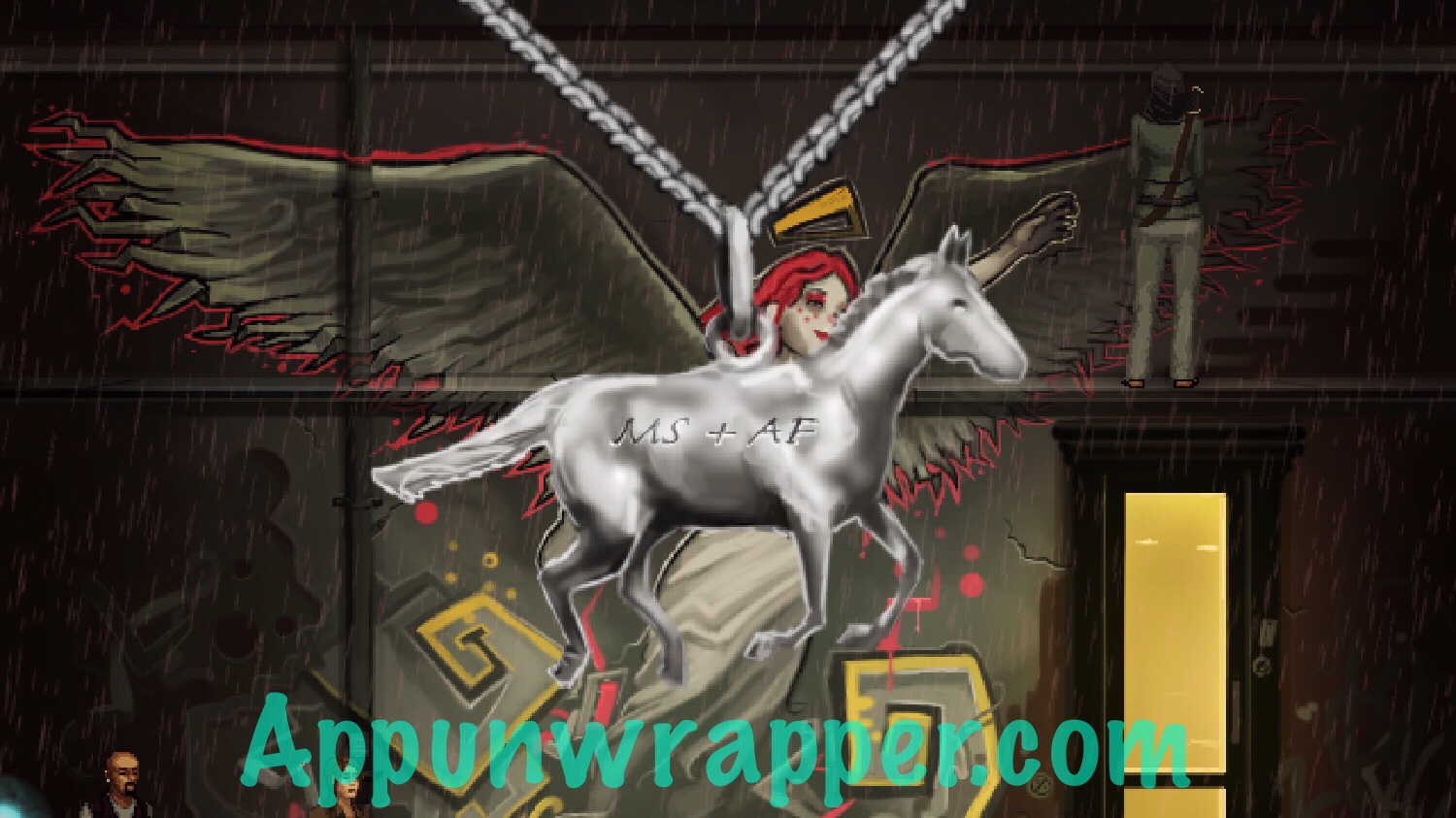 15. Go back to May Stein and ask her about the horse trinket and/or the restraining order against Amos Fennel. The horse trinket has her initials engraved in it. She tells you AF is Amos Fennel. And you tell her he’s dead. She’ll tell you more about Amos. Then you’ll insult her by implying June is acting the same way he did, never stopping her drawing.

16. Head back to the ghost and have Logan ask him about May Stein. He mentions Stan Bates! The ghost is finally read to cross over! Now he’s gone. (If you don’t have Logan, just skip this step.)

17. Head back to Stan Bates and talk to him about Amos. Stan Bates sounds like a psycho. He’s also the new muse! Your demon gave him Calliope’s powers. Head inside with him.

18. He doesn’t want you to cure him and connects you to the creative energy of the universe. He asks how you’re feeling. I chose angry. When you wake up, you’re spray painting Melkhiresa’s name on the wall? You’re also alone.

20. Go back to Calliope and ask for her help. Head back to Stan’s place with Calliope. She tells you that you and your companions have a connection, so you can reach them. Talk to Mandana/Eli and you’ll sort of be inside their heads.

Mandana: Talk Mandana’s mother and Kalash and then to Mandana. Keep talking to all three until you can make Mandana understand that she is something new, made up of the best parts of humans and Jinn. She’ll wake up.

Eli: Talk to Eli. He’s afraid of forgetting what his wife looks like. He’s also afraid of turning into Aldin. Tell him his wife’s eye color isn’t important and he’ll agree with you and snap out of it.

21. Head upstairs and talk to Logan or Vicki.

Logan: He’s running in place! He’s running from his alcoholism. Talk to him about the monster and snap him out of it.

Vicki: She’s upset she never gets any recognition as a cop and also annoyed with herself that she even wants it. Keep talking to her and she’ll convince herself she’s a superhero.

22. Time to make another choice! What to do with Stan? I decided to trust Stan and let him keep his powers. Then you can call on him later. I liked Calliope too much to force her to be a muse again. Case closed! You’ll head back to headquarters.