I didn’t really know what to expect from Donut County when I first heard it announced, but being published by Annapurna Interactive was already a good sign for me. They’ve published such games as the masterpiece, Gorogoa, the iOS port of Flower, and short but sweet Florence. I knew anything from them would at the very least be unique. Combine that with the odd premise of playing a hole in the ground, a charming art style, raccoons, and a developer who is know for completely bizarre tweets, and I was totally on board with whatever it ended up being. Luckily, my instincts were correct and it turned out to be a quirky and lovable game that’s hard to resist.

You start off as Mira, texting her raccoon friend, BK, about an annoying honking dude who woke her up. I can totally relate, as city noises are constantly interrupting both my days and my nights. But I’m not sure I would go to the lengths BK did to stop it. See, BK runs a donut shop in Donut County. People can order one of those round, universally adored pastries through their app and he delivers it. Except, he delivers just the hole. And it consumes everything in its path, sucking it underground. You play as the hole, and your first is to get rid of that pesky honker…who also seems to be a legitimate donut delivery person? How curious! 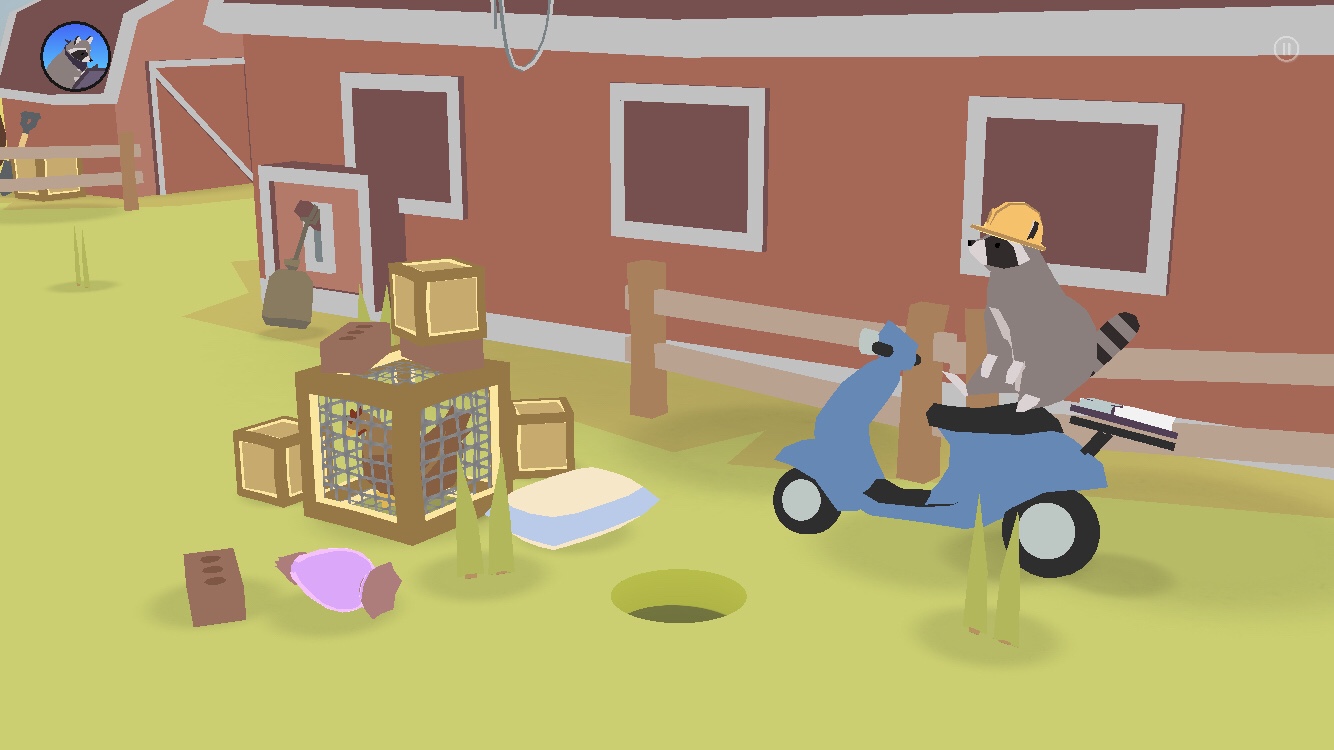 Next, we fast-forward a few weeks and we find out that the entire town is underground! BK wanted a quadcopter, which he could only get by delivering enough “donuts” to get to level 10. Mira’s not too happy with him, but it’s hard to get mad at such a lovable raccoon. We then hear each of the townsfolk explain what happened when they ordered a donut, and you get to relive the event as the hole itself! Things start off pretty basic, just swiping and using the whole screen as a joystick to move the hole around. You need to consume the smallest objects first to make you grow so you can eat up bigger and bigger objects until everything is gone…or at least underground. But the mechanics evolve with each level. Once you’ve experienced all the characters’ stories, you then follow Mira and BK as they try to save everyone and undo all the damage they caused. 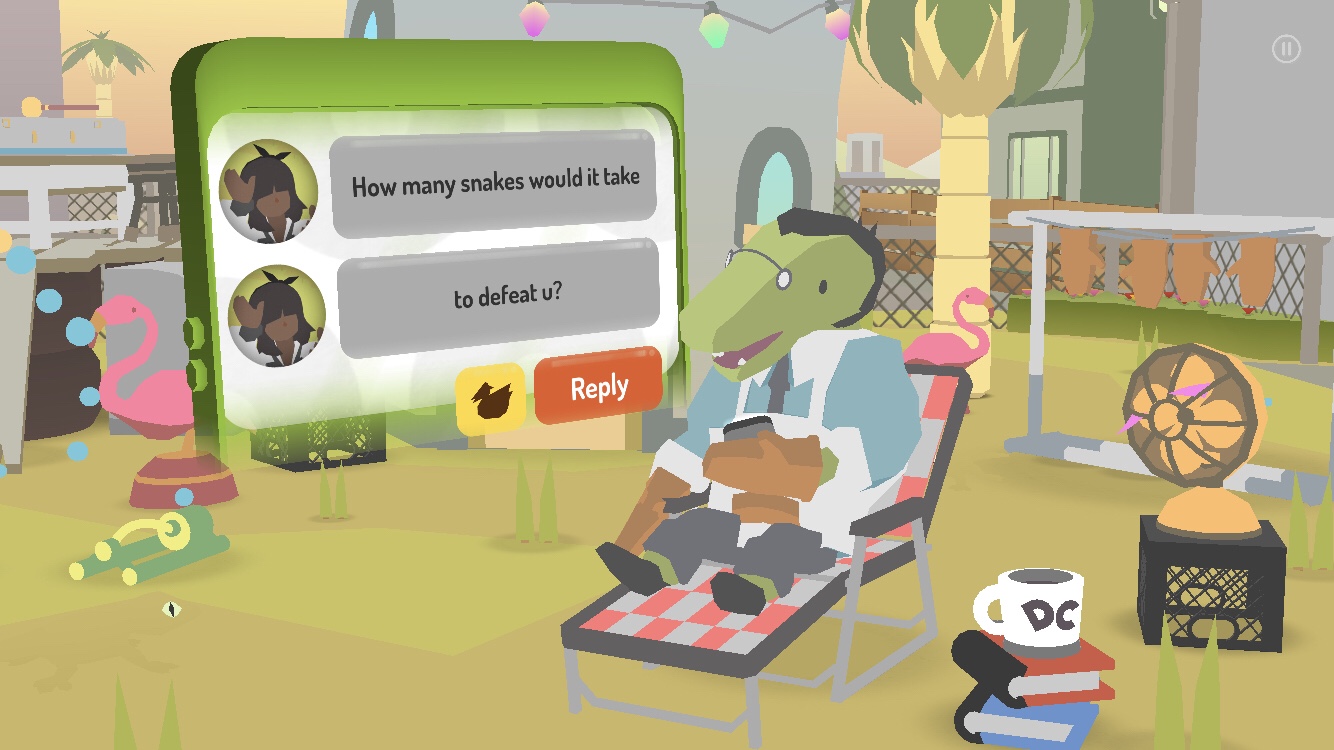 Your hole doesn’t just suck things up, though. As you make your way through the story, you’ll find new ways to interact with your environment using just the hole and some innovative thinking. And maybe some upgrades. Perhaps an item you suck up can be used with something else? This is a physics-based puzzle game, where you’re expected to play around and experiment with your environment to figure out how to progress. The puzzles aren’t terribly challenging, but there’s very little guidance in the game. Messing around and noticing how things react to each other can be very satisfying, especially when everything comes together. Still, if you’re coming for difficult puzzles, you may be disappointed. This game is about telling a quirky story in a unique way, not about hurting your brain. 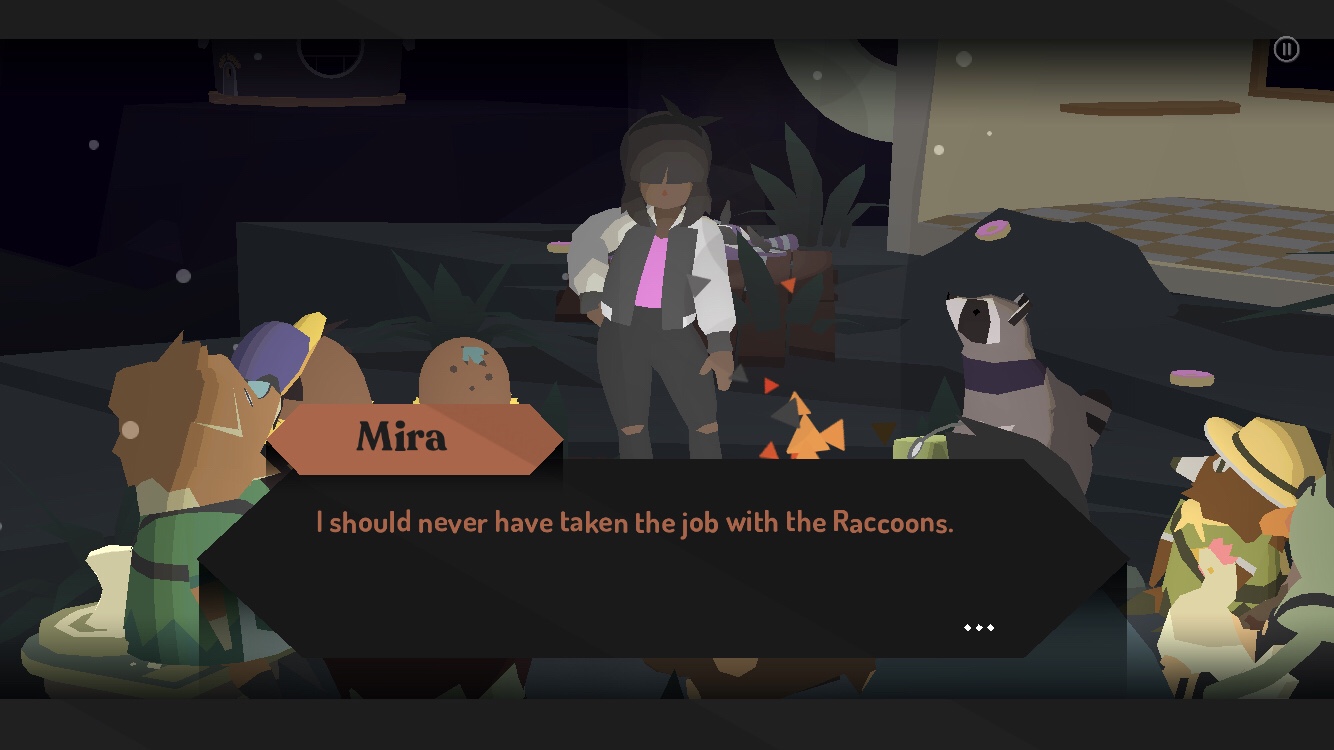 One of the highlights for me was the Trashopedia, which keeps track of all the items you’ve consumed. Normally, it might not be so noteworthy that you collected a bunch of rocks, chickens, cacti, or cinderblocks. But each item has a silly description that often made me smirk or outright laugh. For instance, the description for “Fast Food Tray” is “free sled.” And a “Camping Tent” is a “fake house that’s easy to steal from.” I highly recommend reading through them all after each level. But if you’re in too much of a rush to get to the next area, the game saves them all for you to peruse at your own leisure. 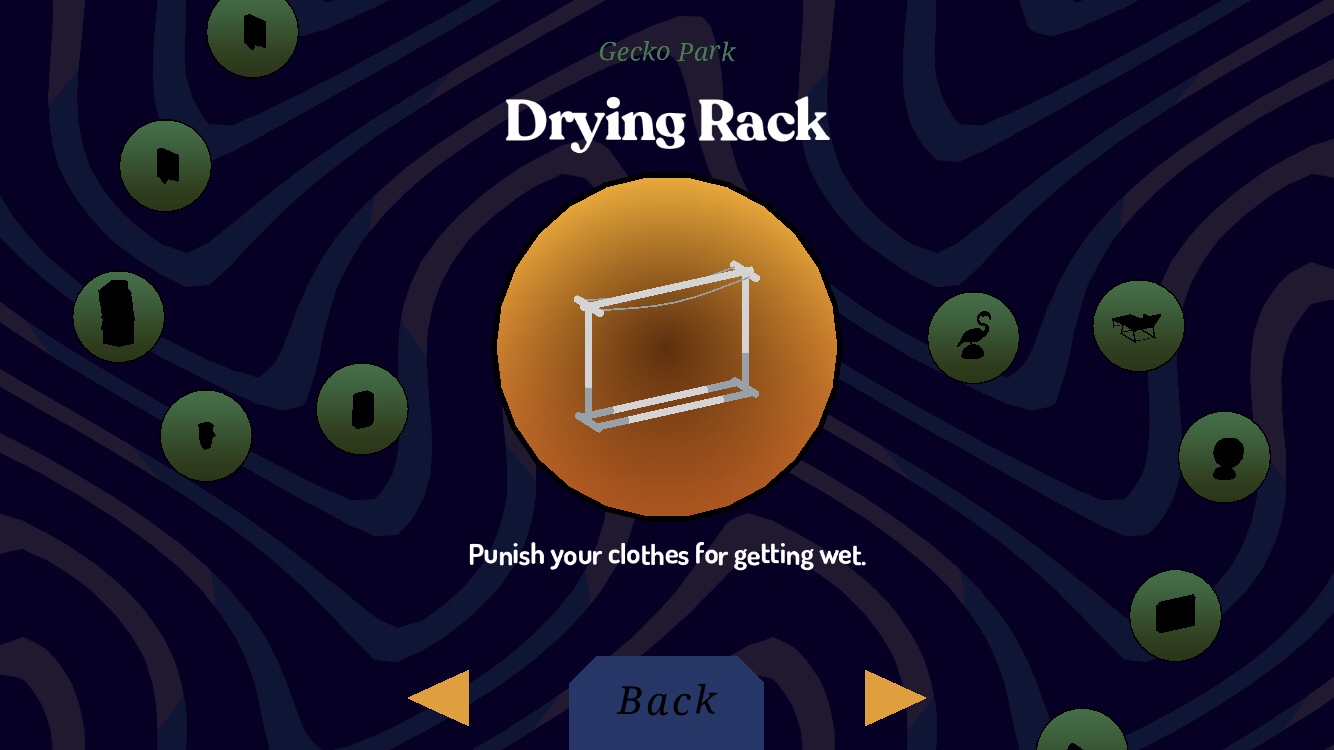 I don’t want to reveal too much more about the game, as the fun is in the discovery. I will say that the final level gave me some trouble, as it consisted of fast-paced action instead of thoughtful puzzles. It tested both my precision and reflexes at the end of a game that was pretty relaxed. I almost quit out of frustration, but I managed to get through it on my third attempt and after a break. Still, it seemed a little out of place to me for such a chill game, and it’s possible others might give up on it if they weren’t expecting something fast-paced and frantic. It’s also probably easier with a controller. Swiping quickly around my iPad screen burns my finger, so no matter how well I did at first, it just got harder and harder to keep up. 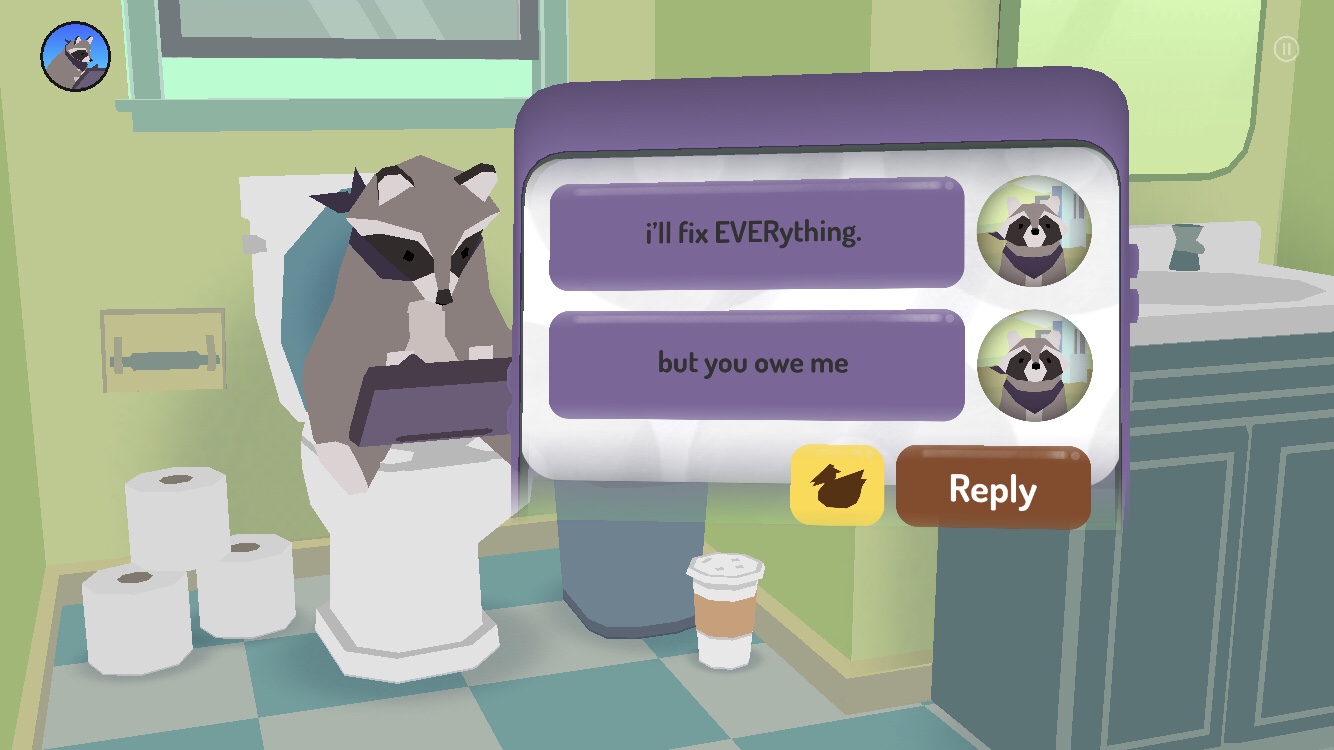 Donut County was the most satisfying for me when I had to spend a little time working out the puzzles, and I do wish the mechanics had been expanded on a bit more. But the game as a whole is pretty hard to resist or be all that disappointed with, even when the puzzles are on the easier side. I love the silly premise, quirky characters, and overall feel of the game. It never takes itself too seriously and knows just how ridiculous it is. It also has iCloud sync so you can play on multiple devices, a feature that seems to be rarer and rarer these days. The controls feel perfect for touchscreen, even if that last level gave me trouble, so I appreciate that Annapurna once again released on mobile at the same time as other platforms. And if you do play on iOS, you’ll get an adorable set of stickers to go along with it. 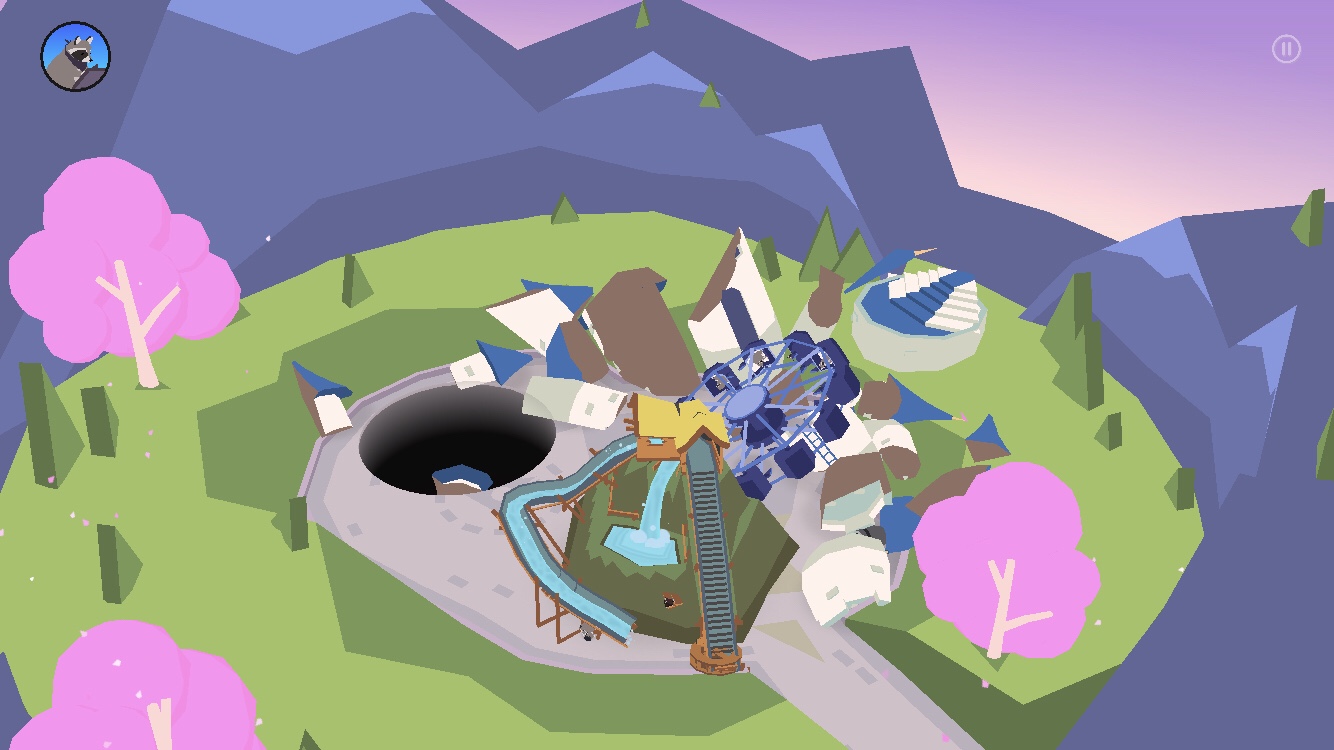 If you’re looking for something entertaining, somewhat puzzly, and completely absurd, Donut County is exactly what you need. Being a hole in the ground is its own reward, but thankfully Ben Esposito created a world around that mechanic, imbuing it with personality. Donut County is an experience, and one I think is very much worth having. It releases tomorrow, but you can pre-order the game here and be all ready to start consuming everything.

My Week Unwrapped: September 26, 2020 – Terafyn, Ministry of Broadcast, Empty., Rip Them Off and More