Just the other day, I was thinking how there have been a lot of PC ports for iOS lately, but they all seem to be platformers and other reflex-based games, genres that don’t always feel right on a touchscreen. I was wondering where all the puzzle games are, as there have been quite a few I’d wanted to play, just not on a PC. Then, out of nowhere, Fidel Dungeon Rescue arrives with almost no warning. I’d heard a lot about it over the last year or so and always thought it looked like a good fit for mobile. And as it turns out, I was right! Despite having my plate full at the moment, I spent most of my weekend playing this puzzle roguelike featuring an adorable dog, and I can’t seem to get enough.

In Fidel Dungeon Rescue, you play as the lovable pooch, Fidel, who has to rescue an old lady snatched up by a mean ol’ dragon. The main game consists of fifteen levels of a dungeon that you need to survive. Each randomized level has a number of monsters, traps, coins, medical kits, and treasure chests laid out on tiles. The game doesn’t spell it out for you, but you need to draw a path from the entrance to the exit. The catch is that your leash blocks any tiles you’ve already stepped on, so you can’t step on them again. This aspect of the game reminded me of Cosmic Express, as you need to plan out your path carefully so you don’t block yourself off from the exit or miss too many monsters. Thankfully, you can rewind your moves as much as you want, all the way back to the entrance. So you can work things out as you go along and then fix any mistakes you made without any consequences. 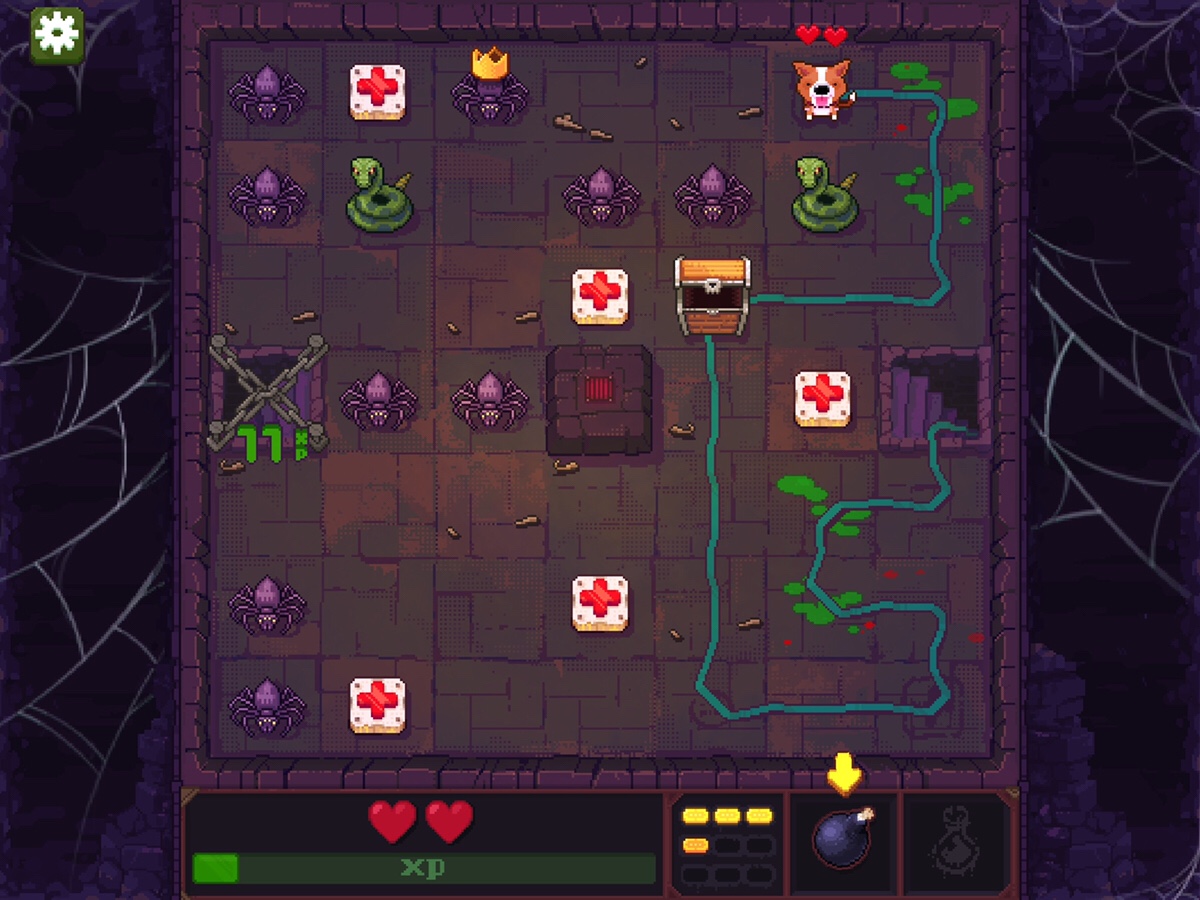 That said, you can die and end up having to restart the entire dungeon. If you lose all your hearts and take extra damage on top of that, a baby ghost will appear at the entrance and you’ll be forced to rewind a bit. But don’t fret! The first time you die in a level, there’s no real consequences. As long as you make it to the exit without dying again, you’re fine. But if you die a second time, the ghost grows up and chases you. If you don’t make it to the exit before he catches you, it’s game over. Even if that does happen, though, the base game is short enough that as you learn more about the enemies, you should be able to catch up again fairly quickly. Still, avoidable deaths are no fun, so just take your time and be careful where you step. Even if you end up restarting, the randomized levels should keep you entertained as you catch up again. 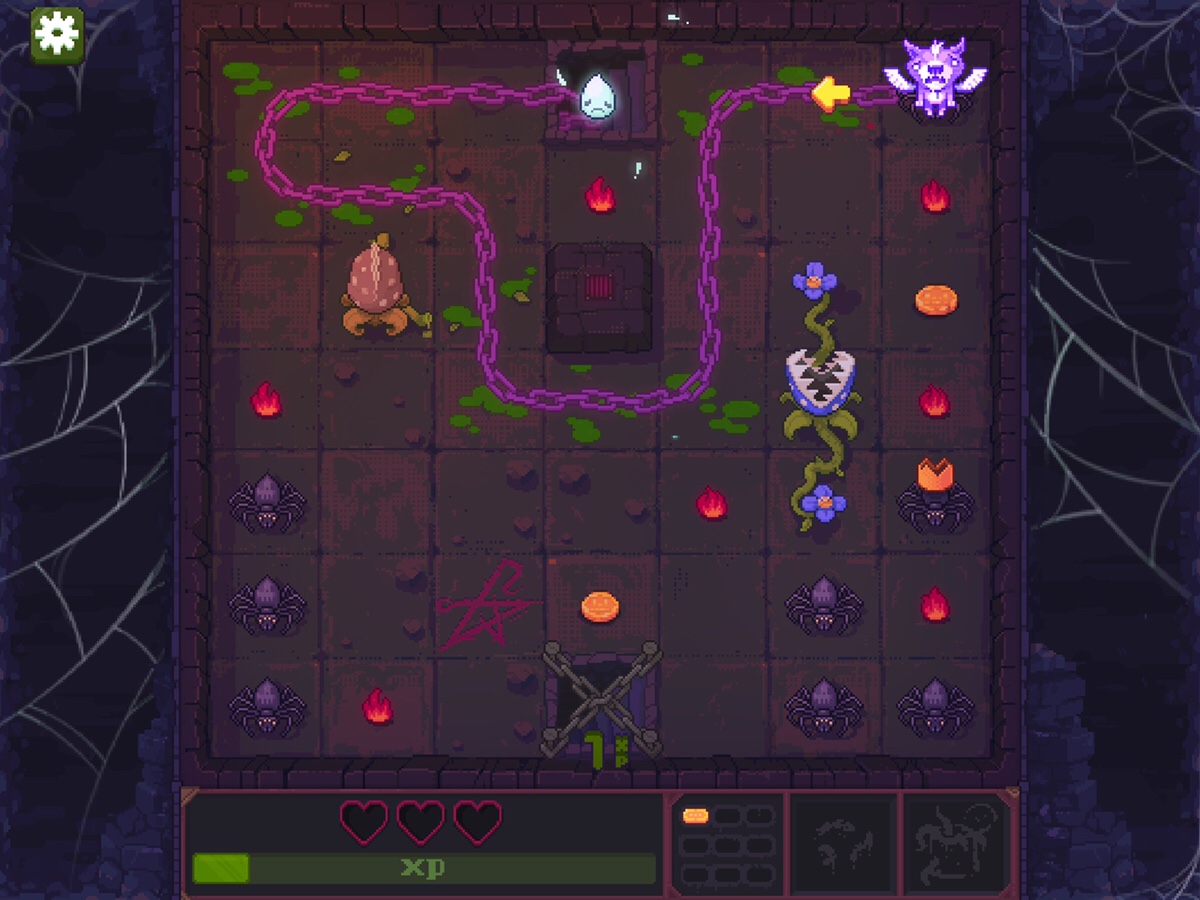 On your way to each exit, you’ll want to take down as many monsters as possible so you earn experience points (XP). A certain amount of XP is needed to unlock the exit to the next level. But if you just go for the bare minimum, you may run into trouble later. That’s because the XP allows you to level up, earning an extra heart. If you rush to the exit without making good use of your time, you may end up at the boss with five hearts instead of six and will have a much harder time beating him. The game even tempts you sometimes by placing the exit very close to the entrance with no lock on it. Don’t take the bait, though! Enjoy the puzzles and the challenge of maximizing your experience from each level of the dungeon. You’ll also pick up coins on your journey, which can be used to buy one-time use bombs or health potions. Knowing the perfect time to use them is also part of the challenge. 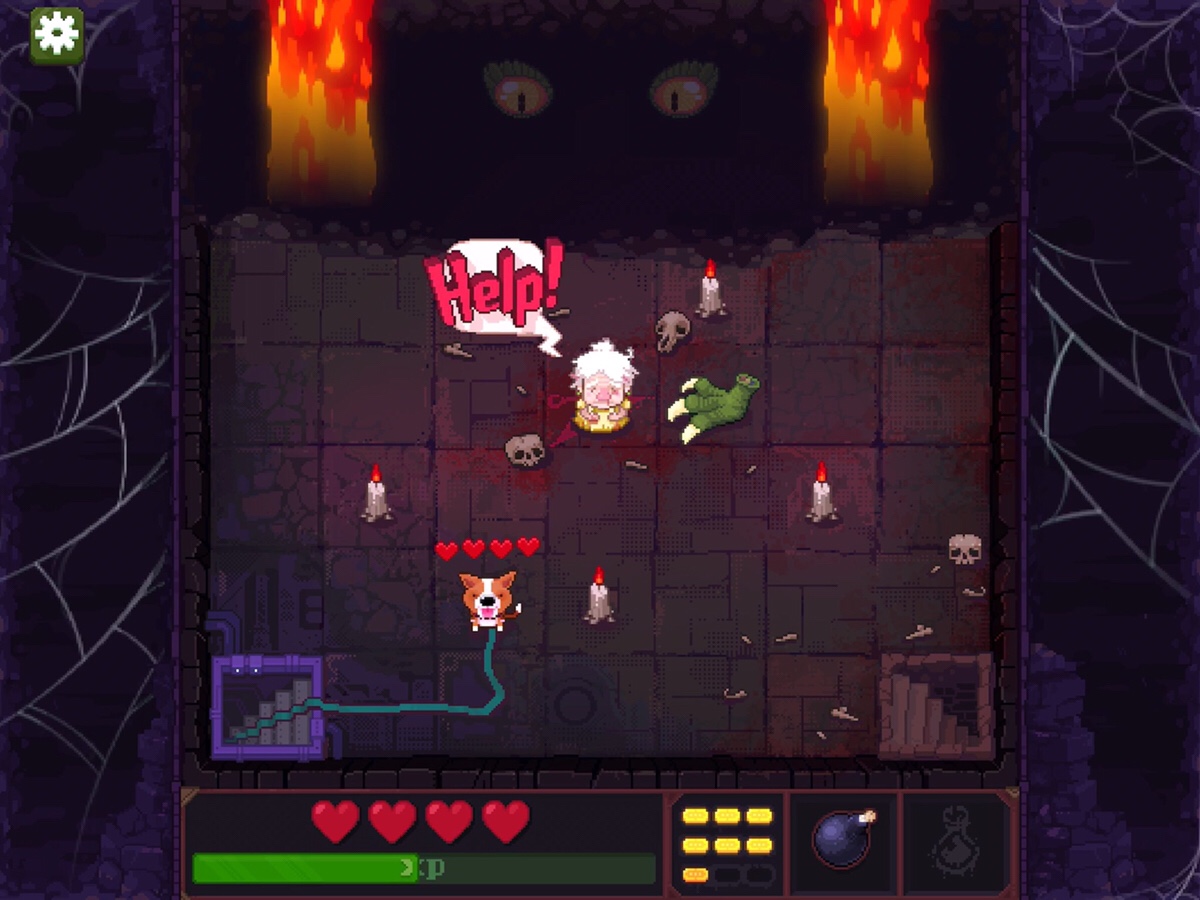 My first game was kind of embarrassing, as a missed a lot of details. As I said earlier, the game doesn’t really teach you anything, so you learn through trial-and-error. For instance, the basic enemy is the spider, which damages you for one heart when you kill it. There’s not much more to it. But other enemies may have special ways to kill them that give you bonus XP. For example, there are soldiers that start off asleep and if you kill them while they’re asleep, you don’t take damage and you get extra XP. But if you kill an enemy next to them, the soldier will wake up and killing him will damage you for two hearts. Three-headed turtles are very snappy, but can be snuck up on from their back. Some enemy weaknesses are easier to figure out than others, but it always feels like a eureka moment when it happens the first time. It even took my a while to realize that you get three bonus XP for killing three monsters in a row. Once you learn all these tricks, it’s fun to go back and try to squeeze out every last XP from the dungeon.

On that note, I did have some issues with the randomness of the levels at first. I usually prefer hand-crafted levels over randomly generated, so it took me a bit to warm up to the game. My main issue was not knowing whether I achieved the optimal solution and simply having to move on when I thought I did as well as I could. It’s still something that nags at me sometimes, but the game even acknowledges this in its post-death tips, encouraging you to keep moving and not get hung up on trying to find the perfect path. I was also thrilled to discover, after I completed the main dungeon, that there’s a Puzzle mode where each level has a specific solution. Dying doesn’t force you to restart the whole dungeon here, so you can make mistakes as much as you want. And you know when you’ve solved it the right way, because otherwise the door wouldn’t unlock. I was even happier to learn that this mode isn’t just limited to ten levels, but rather a whole pool of them that get shuffled in each time you play. 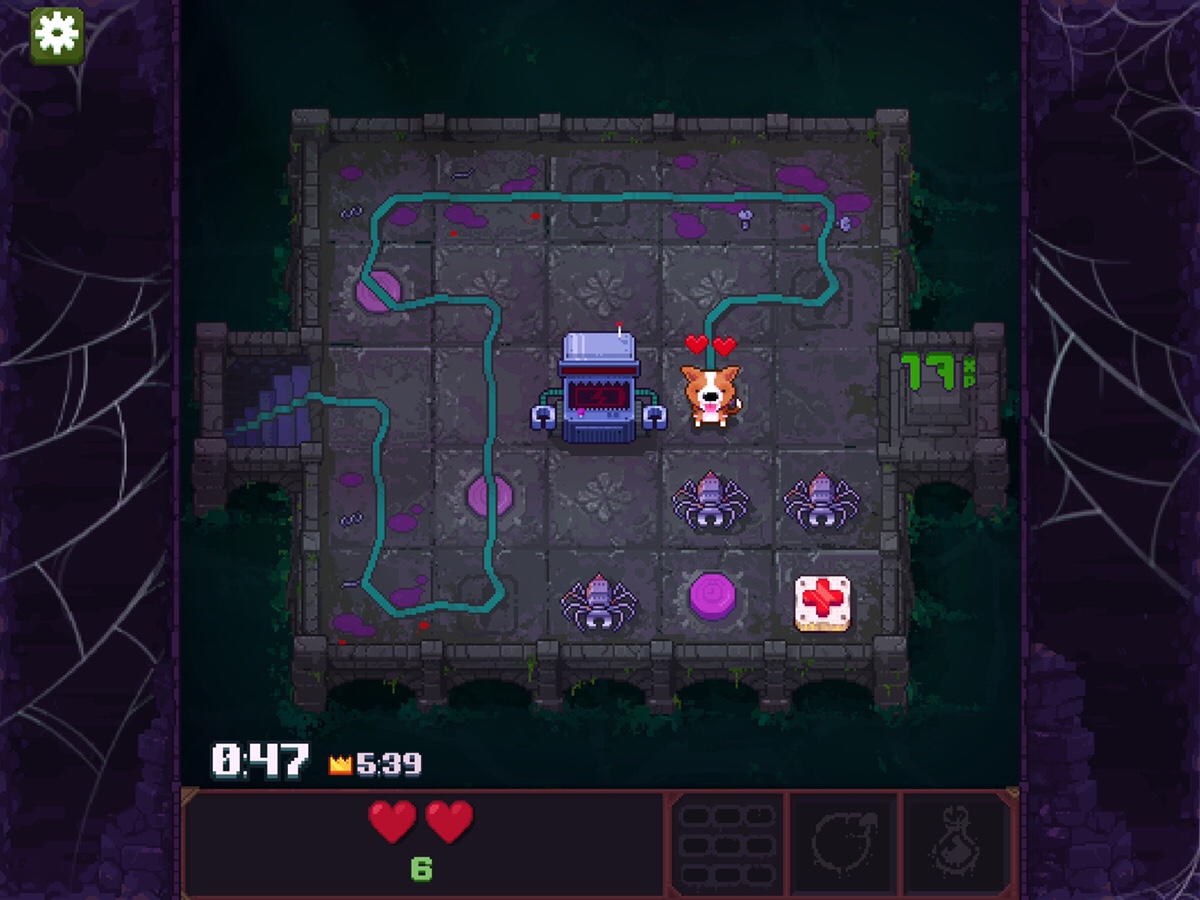 On top of that, you can unlock two other playable dogs that mix things up quite a bit, as they each play very differently to Fidel. There’s also a crazy fast-paced mode where a ghost chases you from the start, a centipede mode where you have to chop up a giant centipede until he’s completely gone, and a very difficult daily challenge. That’s besides the Underworld, and an extra semi-hidden challenge that I won’t spoil for you here. You can also keep replaying each mode over and over, since the levels are randomized. You may even bump into new monsters you’ve never seen before. There are plenty of other secrets to discover, as well, so I’ll just say this — bark at everything! That’s right. When in doubt, just bark. 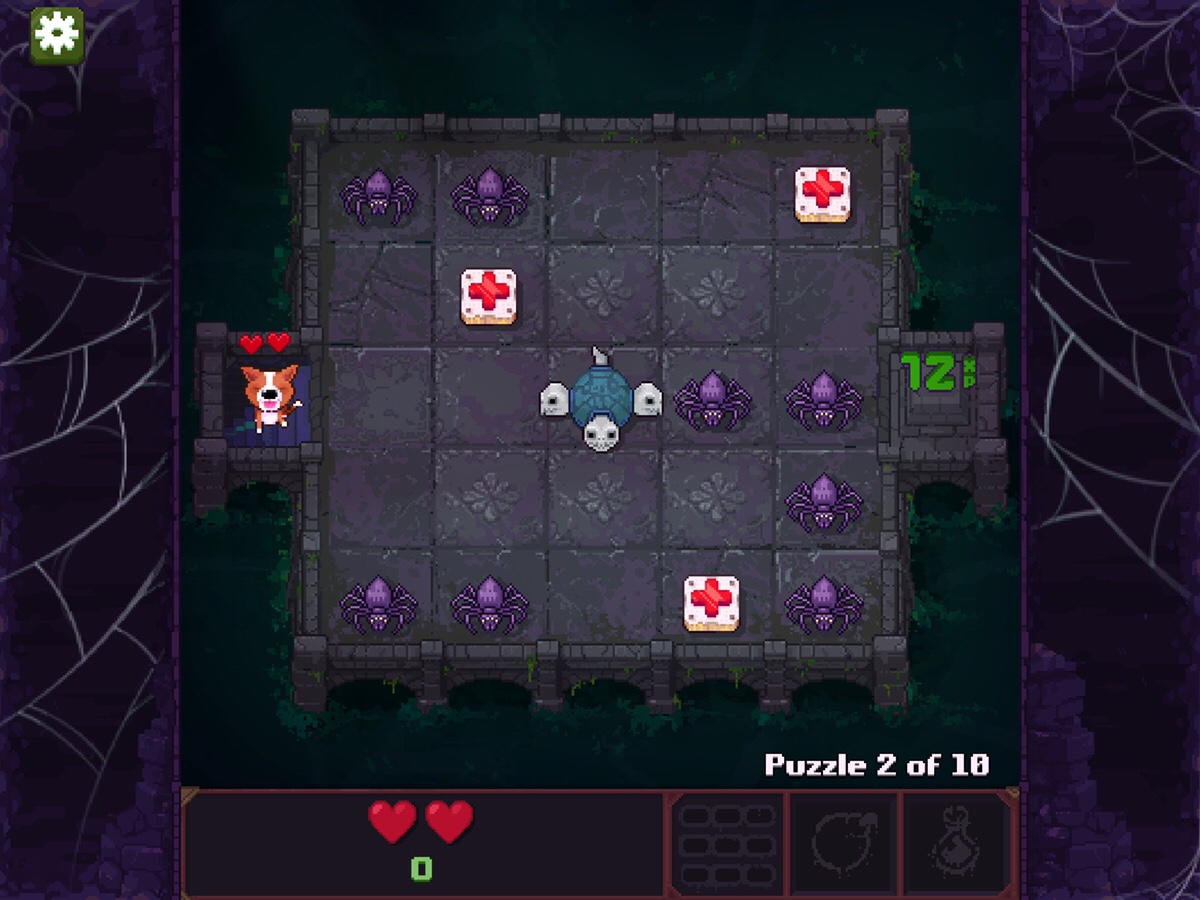 Now, remember I was saying how so many recent ports didn’t seem like a good fit for touchscreens? Well, Daniel Benmergui put a lot of work into making sure that Fidel feels great no matter what device you’re playing on. The control scheme is different depending on whether you’re on an iPad or an iPhone. I prefer iPad, mainly because it’s more comfortable to rest it on my lap and plan things out on the bigger screen. And I can just draw the path from the entrance to the exit. But that would be more awkward on an iPhone. Since people normally play iPhone games with two thumbs, the controls take that into account. You swipe on the right to move Fidel and press a button on the left to rewind or swap the entrance and exit. Barking, bombs and health potions are the same on both devices — just tap. It all feels really great. The only way it could be better is if the iPhone version was in portrait mode, but I know that would require a lot of extra work to make happen. 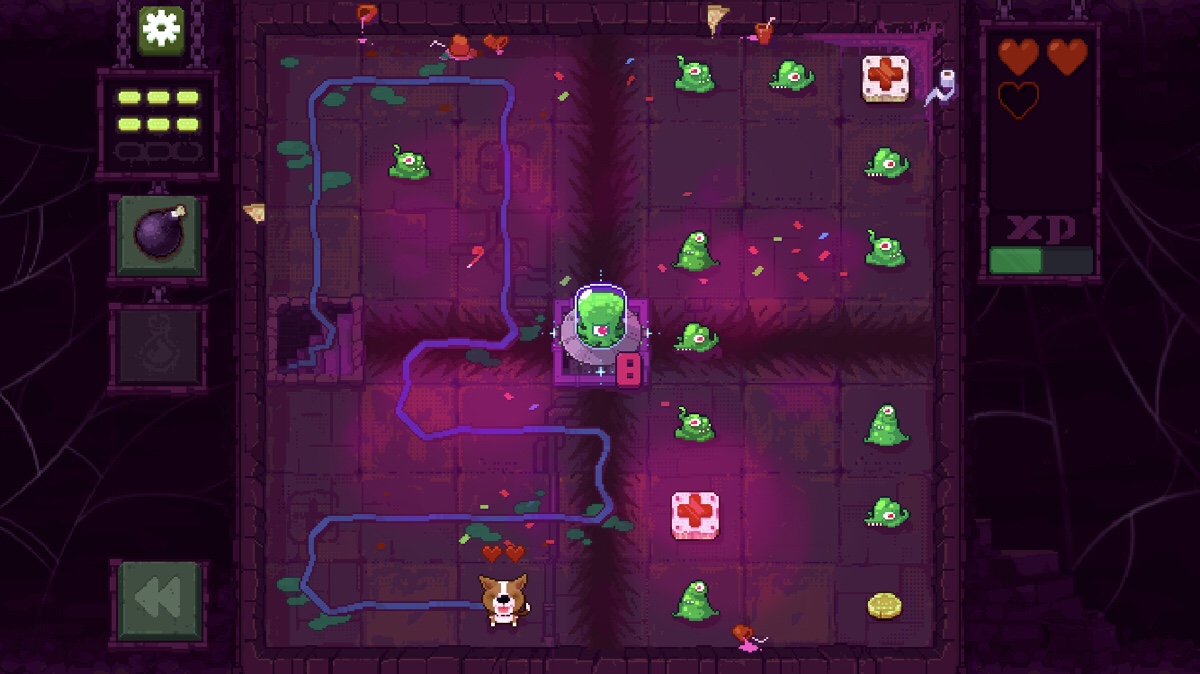 The game is also perfect for on-the-go play, as it saves exactly where you are and opens up right to your last move. So whether you have five minutes, twenty minutes, or two hours free to play, you can do so knowing you’re not wasting your time. That said, I wouldn’t mind a few more features to make it even more mobile-friendly. For one, iCloud sync would be very welcome. It’s not that time-consuming to replay the main game once you’ve done it before, but the rest of it can be quite challenging and I would rather be able to pick up where I left off instead of trying to catch up. The developer did say it might come in an update, so I’m keeping my fingers crossed. 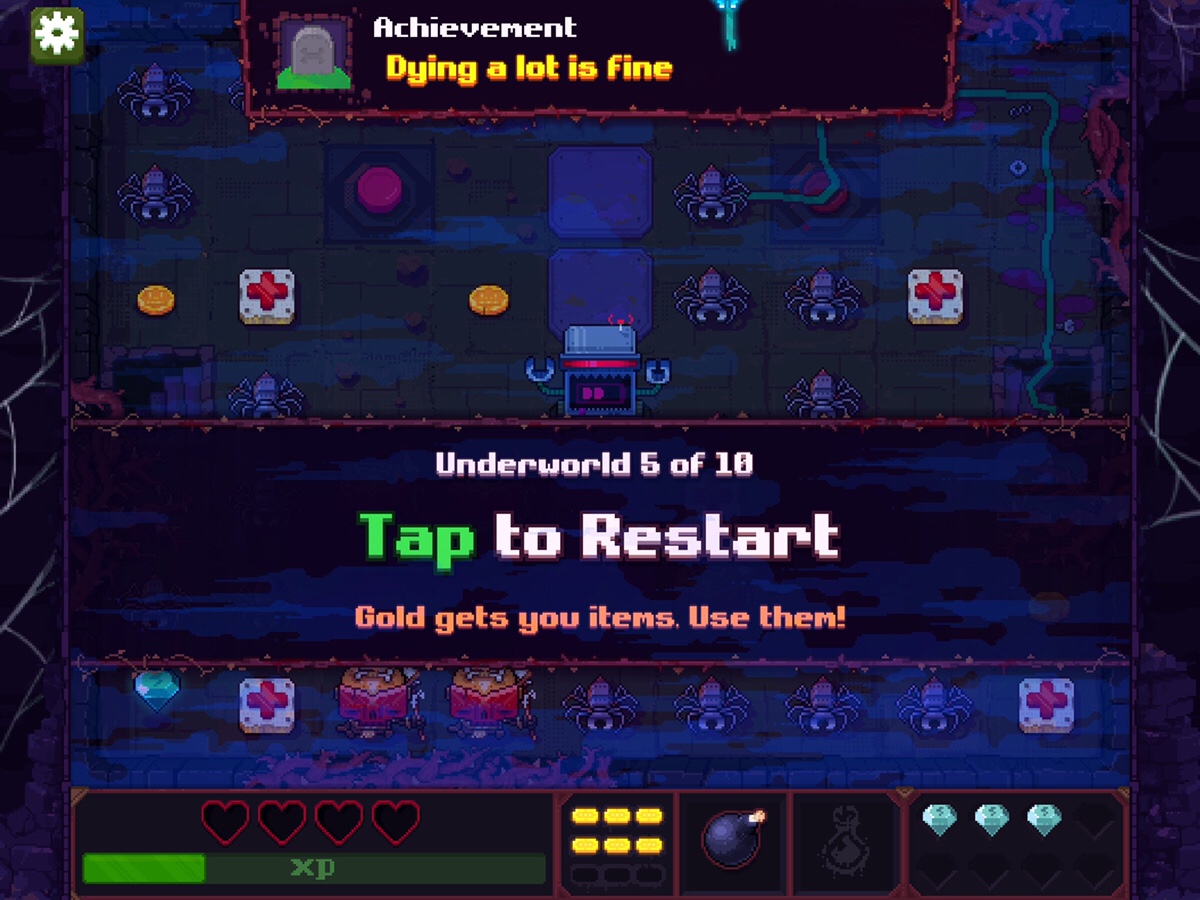 Also, because there are so many different modes, I wish the game had a way to go back to the main hub without quitting your run altogether. Sometimes, when I’m in middle of a particularly tricky level, I want to take a break and try one of the other modes for a change of pace. But I can’t do so without forfeiting and losing the progress I made so far in that dungeon. I would love to see a way to save your progress in each zone separately. It’s the main drawback for me at the moment, as the Underworld is especially difficult and it would be nice to be able to take a break from it and play one of the less stressful modes. It’s not a dealbreaker by any means, but it has affected the amount I play at the moment. There’s also no way to see a list of the achievements you earned or which ones you’re still missing. 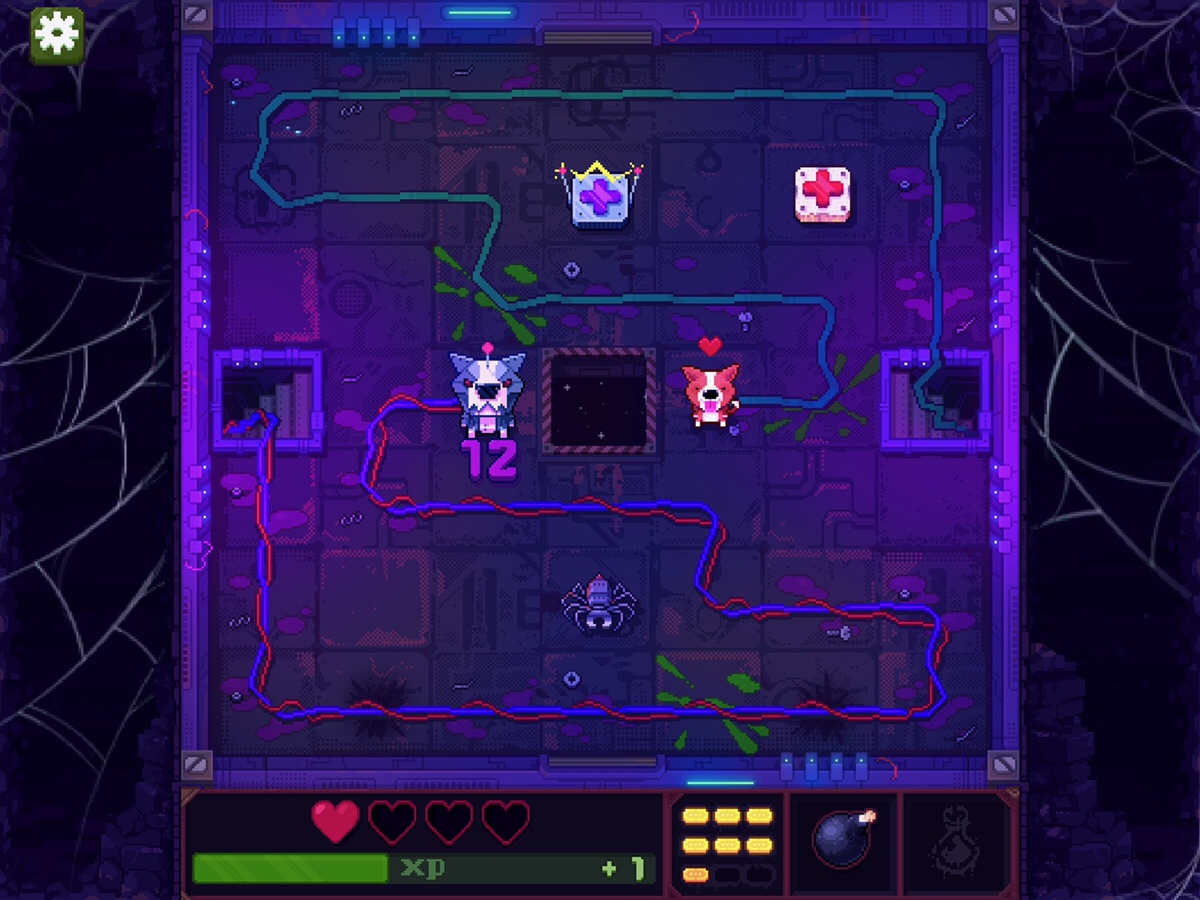 If you like thoughtful, well-crafted games that offer a challenge while still being relaxing, you can’t really go wrong with Fidel. It’s a roguelike, yes, and it’s a strategy game, but it feels like a puzzler. In fact, the puzzle mode is my favorite and I wouldn’t mind more of that. But even with the randomized levels, there’s just so much depth that it’s easy to forgive the fact that there’s no single optimal solution. It’s so much fun to discover new enemy weaknesses and exploits that I didn’t even mind so much when I carelessly reset my progress and had to start from scratch. Fidel is like a cross between Cosmic Express, The Witness, and Sproggiwood, but it actually feels like a better fit for the platform than any of those three. Together with charming pixel graphics and a great soundtrack, this game is the full package. I really can’t recommend it enough. So what are you waiting for? Grab Fidel Dungeon Rescue here and go save grandma!

‘Swim Out’ Review: These Are Dangerous Waters

STAY: Are you there? – Complete Walkthrough Guide and Puzzle Solutions