Persephone
By: Plug In Digital / Momo-pi

I was cautiously optimistic about trying the new mobile puzzler simply titled Persephone, named after the Greek queen of the Underworld. I loved the idea of killing yourself as part of the puzzle, and the artwork looked bright and polished. But not knowing anything about the developer, I was worried it might be too gimmicky and skimp on the actual mechanics. However, after just a few minutes with the game, these doubts started to melt away. By the time I got about halfway through, I was completely in love. While it borrows ideas from Sokoban games you’ve likely seen before, adding death as a mechanic makes these familiar concepts feel wholly fresh. So if you’re a puzzle fan looking for a unique experience, just grab Persephone now. If you need more to convince you, continue reading below.

Like many puzzle games, the goal in each of Persephone‘s sixty-odd levels is to get from point A to point B. Obviously, there will be obstacles in your way, so you’ll have to work around them. The controls are super simple and perfect for touchscreen, as all you do is swipe in a direction to move your character over one square. Everything you’re trying to accomplish can be done by interacting with the environment as you move. It’s turn-based, so you can take as much time as you need to think each move through. But when you do move, any traps will take their turn, as well. What you learn early on, though, is that killing yourself is often part of the solution. For instance, if you walk into a pit of spikes, you’ll die. But, being the queen of the Underworld, you have a special ability that allows you to be resurrected at a checkpoint. Your corpse stays where it is, so you can then walk over it and use it to protect you against the spikes. That’s the most basic way to use death to your advantage. As you progress, new mechanics are added and, since nothing is ever explained, you have to work them out for yourself by experimenting. I’ve seen a similar mechanic in other games, but they’re usually platformers like Sometimes You Die. Considering how well it works here, I’m surprised I haven’t seen it in more turn-based puzzlers. 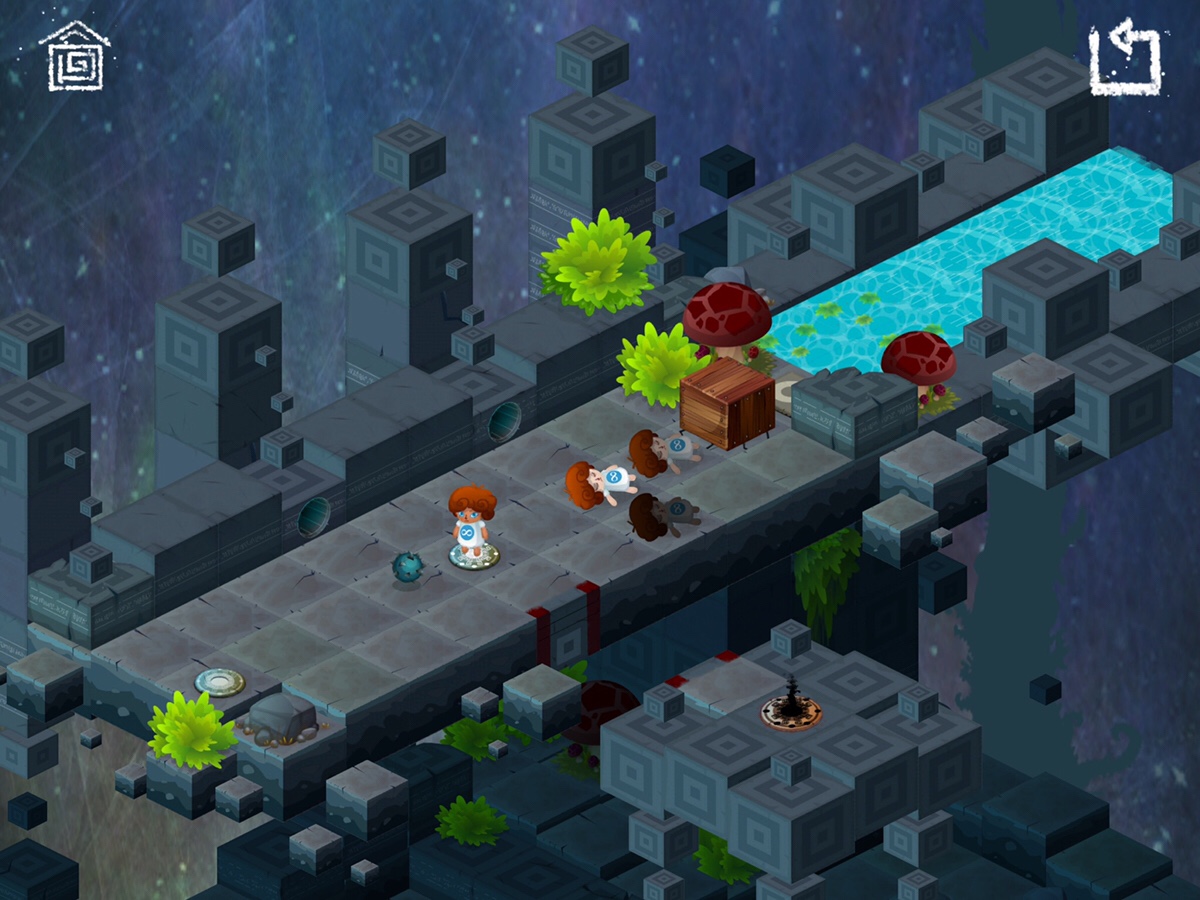 A more advanced puzzle might have you letting a laser kill you, then pushing your corpse over to the next square, thereby getting killed again. Do this a few times and you have a train of corpses, with the last one landing on a button that shuts off the laser. Now you can pass without dying! That said, your ability does have its limits, as that’s what makes it a proper puzzle game. It’s true, you can keep killing yourself and be resurrected. But only three of your corpses will stay on the board. So if you make a fourth, the first one will disappear. If that corpse was part of your solution, it’s back to the drawing board for you! But the game is all about experimenting, so don’t worry too much about messing up, even if you have to restart a level. 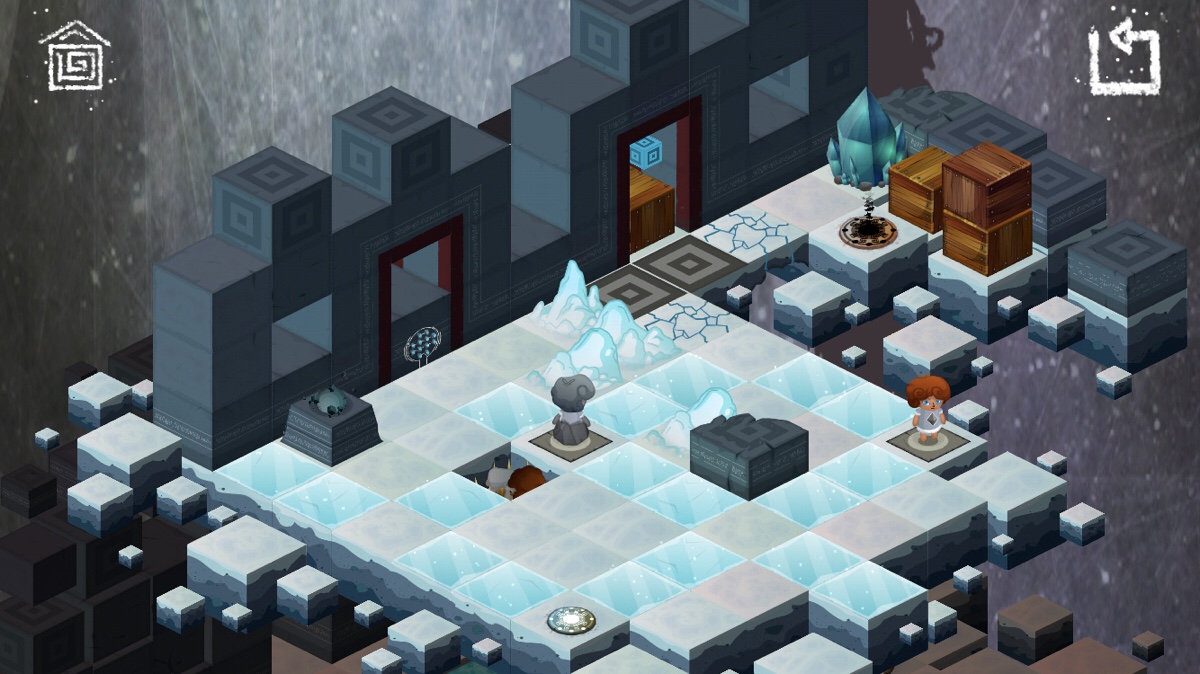 Sometimes, the checkpoints are the answer. You may not need your corpse, so you can just jump off the edge of the board and be re-spawned at the checkpoint, cutting out the need to walk through an area. Soon enough, slippery ice is added to the mix, a familiar mechanic for any puzzle fans. But even that’s livened up with the added corpses. And if that’s not enough, you’ll later encounter orbs that affect your corpse. For instance, if you touch the stone orb before dying, you’ll become a statue upon death. This can be used to block lasers, but also as a stepping stone if you die in water. Add floating wooden crates to the mix and you’ve got some serious head-scratchers. 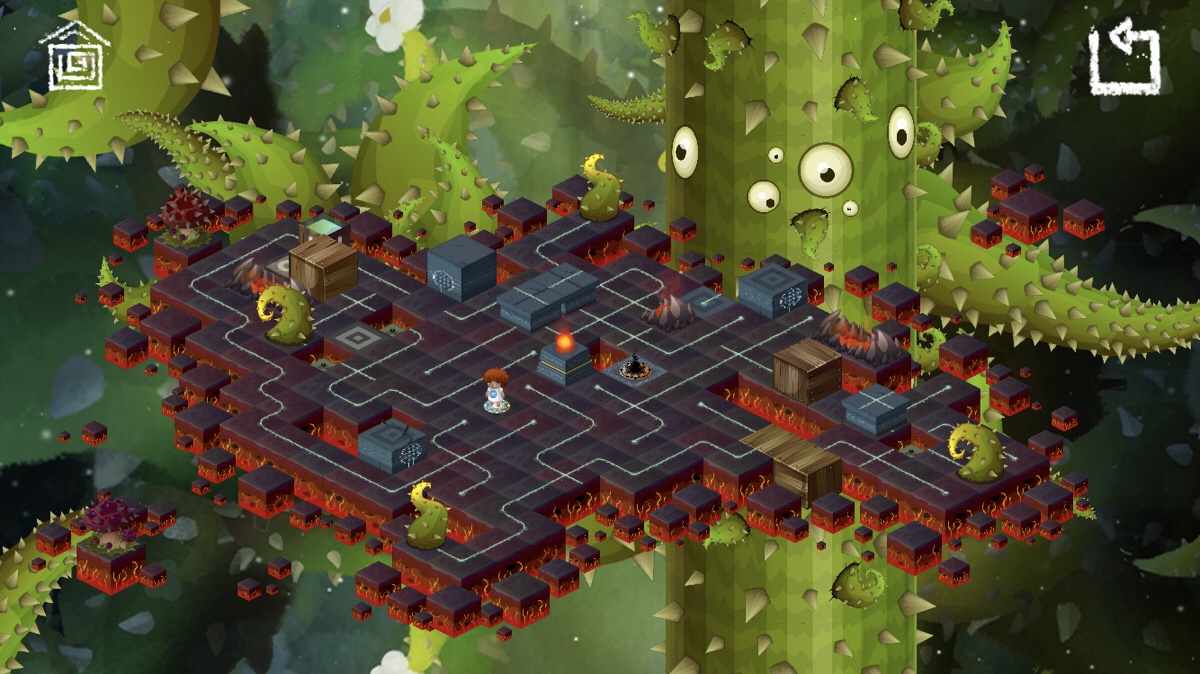 I don’t want to spoil all the mechanics here, as the fun is in discovery. But there are fire orbs that make you explode into flames on death, as well as a final orb that is responsible for some of the trickiest puzzles in the game. On top of that, each of the five worlds has a hidden area you can only reach through one of the other levels, and the goal is very different. These are some of the most satisfying puzzles, so I highly recommend looking for them. Even if you miss them, though, it’s easy to go back and find them later. If you do so, you’ll also be able to get the good ending.

I’m a big fan of these kinds of games, where mechanics are taught through play rather than a lackluster tutorial. It means nothing is lost in translation and the game can be played by anyone, no matter what language they speak. But it also means that some of the puzzles will be very easy, as they’re used to teach rather than stump. Probably my biggest complaint about the game is that I wish it was longer. Now, don’t get me wrong — I much rather have sixty solid levels than two hundred where more than half are filler. With Persephone, each puzzle offers new ideas and I was excited to see what’s ahead. It’s just that I liked it so much, I was sad to be done with it. To get more of it, I even played through it on both my devices since there’s no iCloud sync. 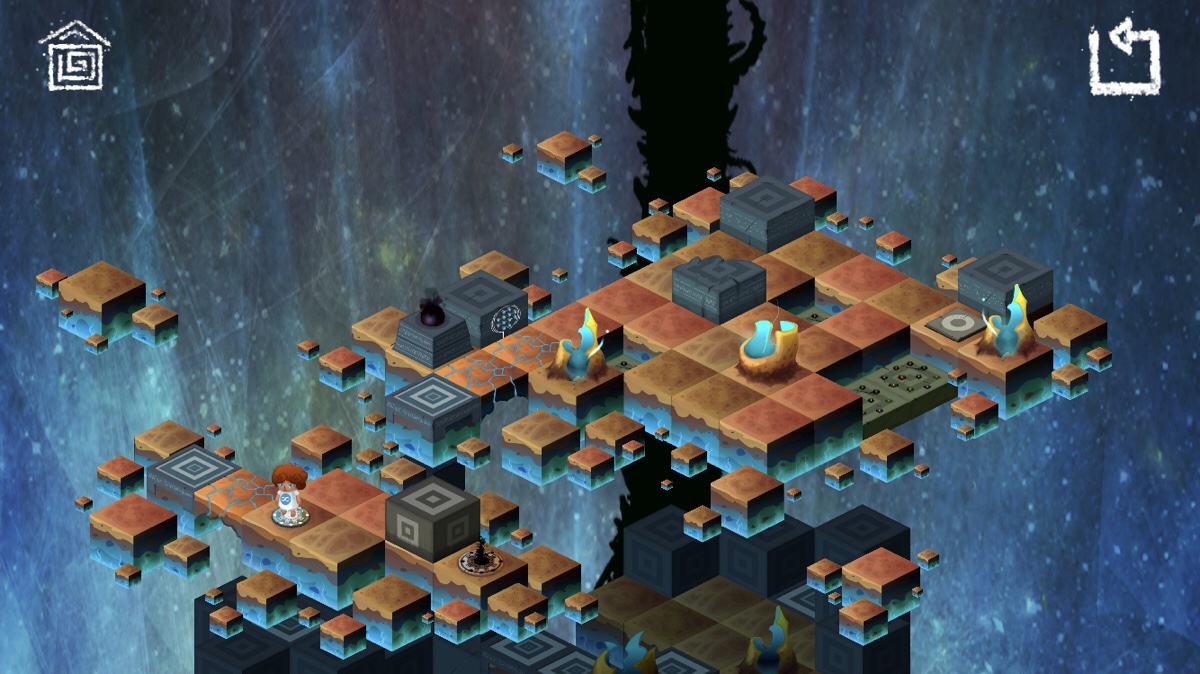 There are other minor issues with it, like the occasional mis-swipe that caused me to have to restart, as well as the lack of an undo button. But most levels aren’t long enough for either to be an issue. In fact, after completing the game, I can see why an undo button might have been problematic. It makes more sense to just restart a level if you screw up. But I do wish the game would let you know when you messed up enough that you have to start over. For instance, you might destroy a box you need or squander the one stone corpse you had. It’s not the end of the world, but since it’s not always clear that you’ve screwed yourself over, I wouldn’t have minded some sort of indication of that. Much of the time, you can just keep playing even if you mess up, so it can be a little confusing when that’s not the case. Still, like I said, restarting a level isn’t a big deal here. 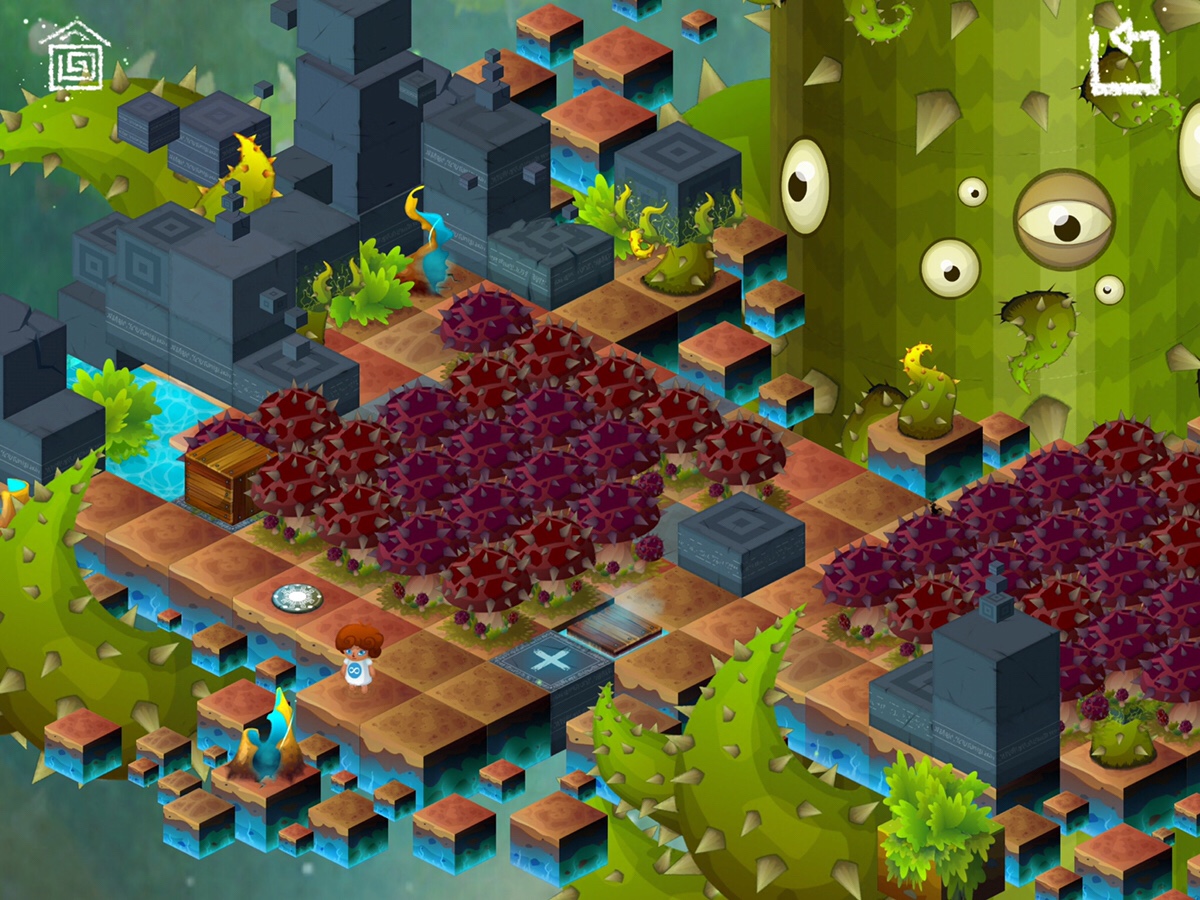 If you’re tired of puzzlers that all feel like rehashes of each other, Persephone is the game for you. The death mechanic is both entertaining and an ingenious way of mixing up the genre. It forces you to think in ways you normally wouldn’t — like pushing three of your corpses to reach a button — and makes you feel smart in the process. We mobile gamers are spoiled in that there are tons of new puzzle games released every week. But few of them are as polished and as satisfying as Persephone. I only hope the game does well enough to warrant adding more content or even a sequel. This is the kind of ingenuity I like to see from my puzzlers, and I’m grateful that it came to mobile first. It’s also a premium game with no ads or IAPs, as well as a clean user interface. What more can you ask for? So grab Persephone here and defy death.