Into The Dark : Narakan
By: ORC PUNK, LLC

I’d been looking forward to Into The Dark : Narakan ever since it appeared in the pre-order section of the App Store, as its stylish minimalistic artwork helped it stand out. I also liked the idea of a portrait mode, turn-based adventure game with roguelike elements. Knowing there was an endless mode also got me excited, as often I get absorbed in a game and wish it had a way to keep playing past the story mode. Basically, everything I knew about Narakan told me it would be right up my alley, something I would keep on my device for a long time. And I was right to a degree. There’s a lot to love about the game, from its standout art style to its haunting soundtrack and compelling weapons system. Unfortunately, due to game breaking bugs, sluggish movement and some questionable design elements, I’ve already lost interest in the game.

At first, I was enjoying the game. Despite some confusion early on as to what was needed in order to move on to a new area, I was enjoying the basic premise. You wake up in a forest, with little idea how you got there. Someone calls your name and you make your way to a little girl, who vanishes as you approach. You spend the rest of the game pursuing her through monster-infested lands looking for answers. The writing is strong, though I sometimes had trouble following along with the story due to the piecemeal way it’s doled out. What really held my attention was the the weapons and battle system. In each area, you must seek out a yellow monolith that acts as a sort of key to unlock the exit, which is the girl. The monolith offers you one weapon, be it a sword, a bow, or even magic. You must accept this item and place it in one of your three equipment slots in order for the exit to appear. There are also blue and red monoliths in each area, but these are optional upgrades. If you seek them out, you can get new weapons and magic, or simply grab an extra heart and shield from them. Otherwise, you can ignore them and move on to the next area. 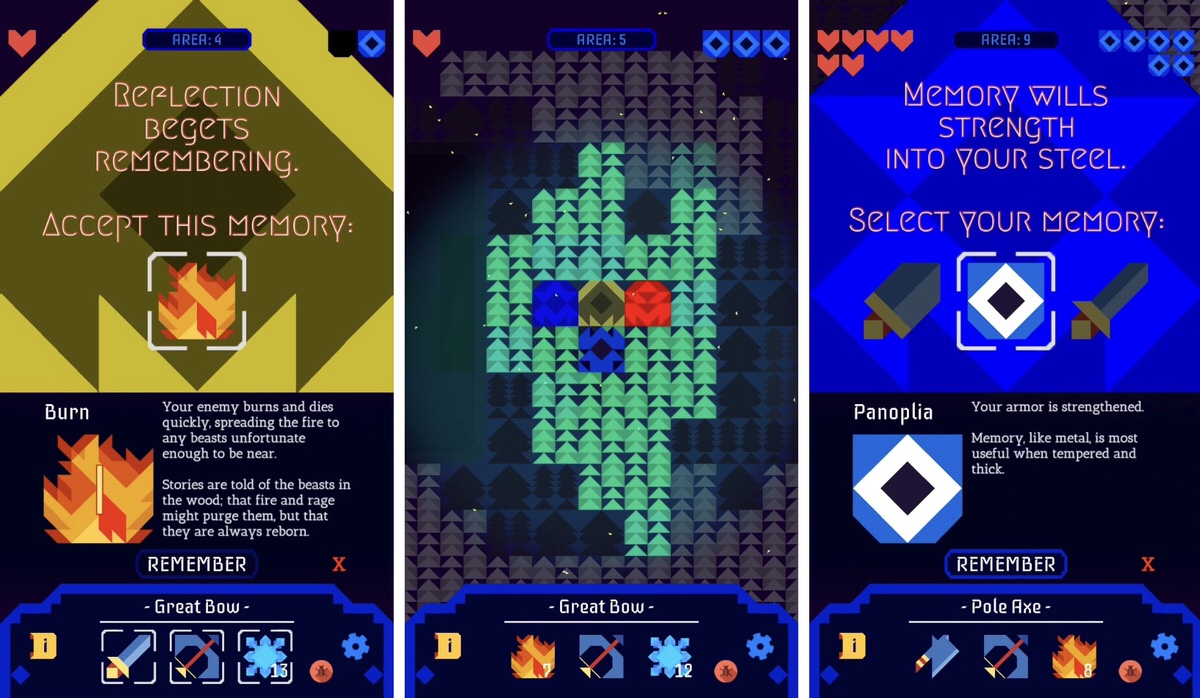 As you make your way around the forest to each of the monoliths and the exit, monsters will get in your way and force you to deal with them in order to progress. Each type of enemy has a specific movement pattern, sort of like chess pieces, but due to the art style, it can be hard at times to tell monsters apart. Thankfully, there are little indicators that show you where the enemy can move next, so you can do your best to avoid those spots. Much of the game is playing this little dance around the monsters when they’re out of range of your weapon or you’re dealing with more than one at a time. It only takes one attack to get rid of a monster, except for the boss who can cover more ground at a time and has more health points than the rest. Still, your strategy shouldn’t stray too much when dealing with him. I wouldn’t have minded something a little more exciting, as at times I didn’t even realize I was battling the boss until he was dead. Still, the overall combat system is pretty compelling. 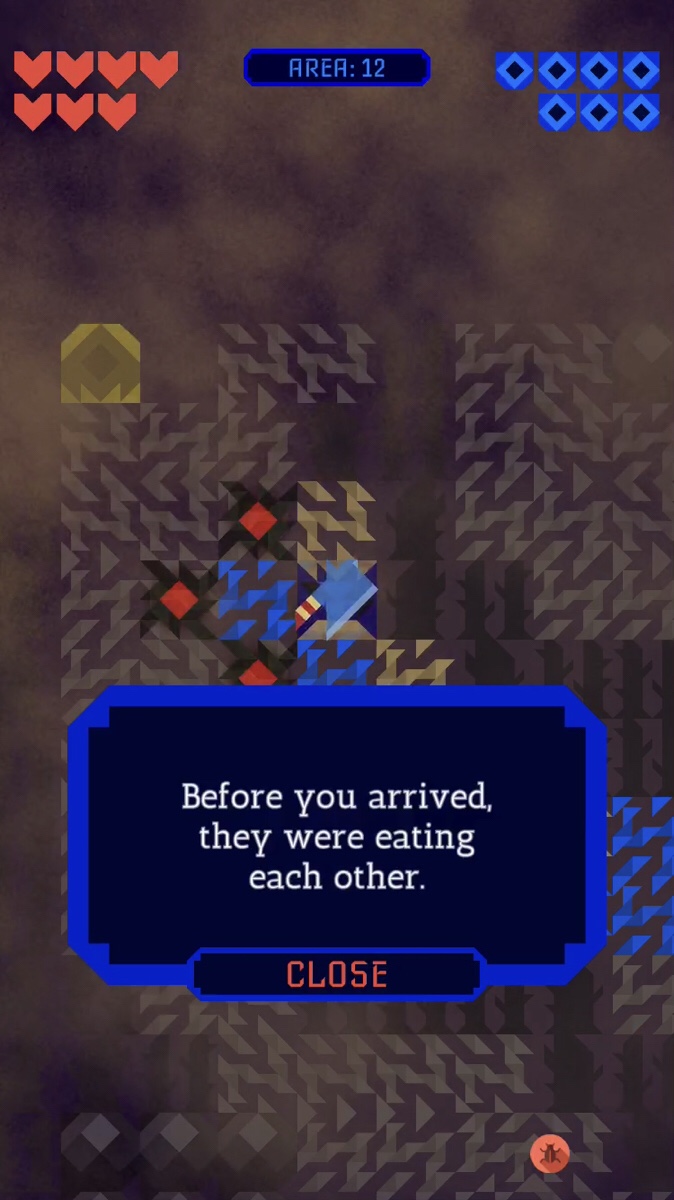 The way weapons work in this game is that they all do the same damage, but each one has a specific pattern in which it can attack. For instance, the broken sword you start with can only attack diagonally one space away from you. A slightly better sword might allow you to also attack monsters directly next to you. But something like the pole axe or great sword will allow you to attack monsters from a farther distance. And while melee weapons will send you to the spot you attacked, long-distance weapons like bows and crossbows allow you to stay put and pick off enemies as they appear around you. Usually, a weapon that reaches far won’t be able to attack enemies directly next to you, so it makes sense to have weapons in your arsenal that have different attack patterns. You can also use magic, such as ice, fire, and lightning, which can hit just about any enemies within sight. But they have a cooldown period and only thirteen uses before they disappear completely. Since enemies also move and attack in specific patterns, the equipment system is probably the most compelling part of the game. I enjoyed seeking out my favorite weapons and discovering new ones. At the moment, my preferred combination is the pole axe, great bow and mace, as I can attack pretty much anything that comes near me. 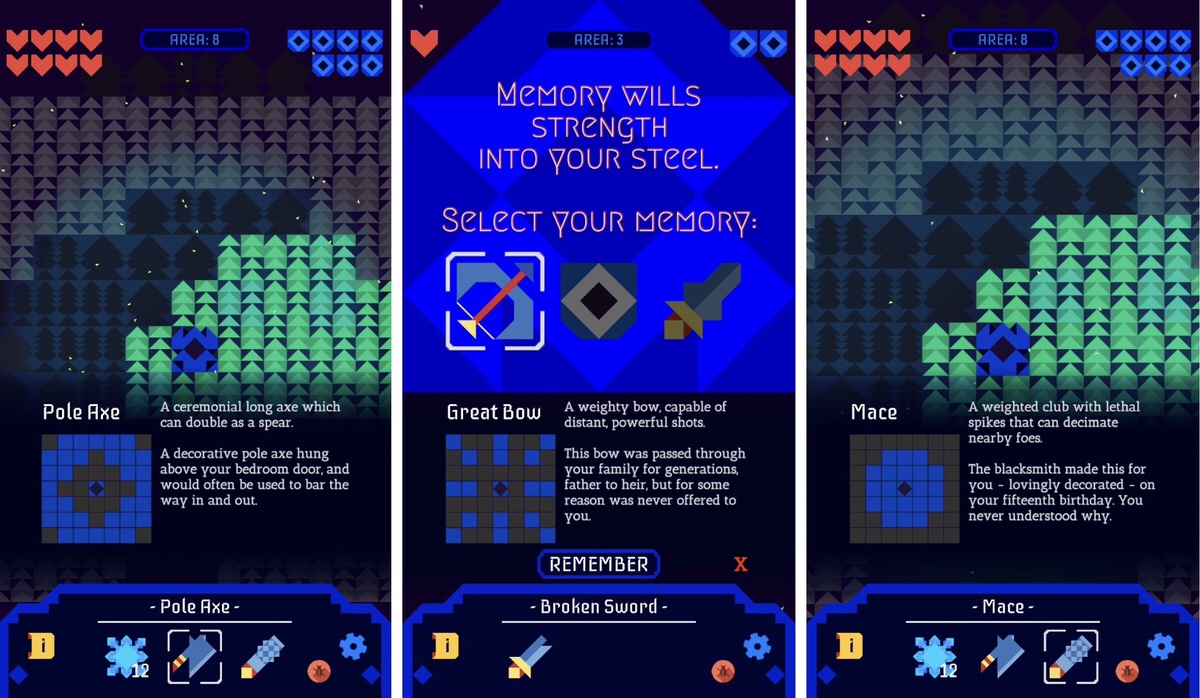 The way the game keeps you from holding onto three pieces of gear for the entire game is by forcing you to accept the upgrade from the yellow monolith, whether you want to or not. A strategy/survival game like this needs to have some difficult decisions in order to keep it interesting. So while I cursed every time I had to give up one of my favorite weapons, I appreciated the necessity. That said, I don’t think think it was enough to keep the game compelling long-term. Even with the limitations, I still managed to pick up enough hearts and shields that I never really felt I was in danger of dying. Part of the reason for that is also due to the enemies. They rarely posed a real threat, as very few would come near me at a time, and and I could usually pick them off easily. And by the time I encountered more difficult enemies that gave me a harder time, I had so many shields and hearts that I wasn’t all that concerned. In fact, I lost my twelve shields in area 28 simply because I got reckless and careless in my eagerness to move across the forest faster. I figured I could take a few hits, so I didn’t stop to methodically deal with all the enemies. And I would have been fine even after losing all my shields (temporarily) if not for a game-breaking bug I ran into.

In area 28, I decided to push my way through and find the red monolith, despite the fact that it was on the other side of the I forest, I didn’t really need the hearts, and I had already unlocked the exit. Once there, I discovered that I had reached the maximum number of hearts allowed. But since I had lost one of them temporarily, the monolith restored it to the full twenty. But at the same moment, I lost all my shields permanently. I didn’t even notice it until I got to area 29 and all but two of my hearts disappeared, as well. Now, I know I said the game was too easy, but at this point the enemies posed enough of a threat that I wasn’t sure I’d be able to manage on only two hearts. So I took a break and started an endless game to see how it differs from the story mode. And it felt pretty much the same, just without the story. I played through area 8 before I stopped because I was getting bored. 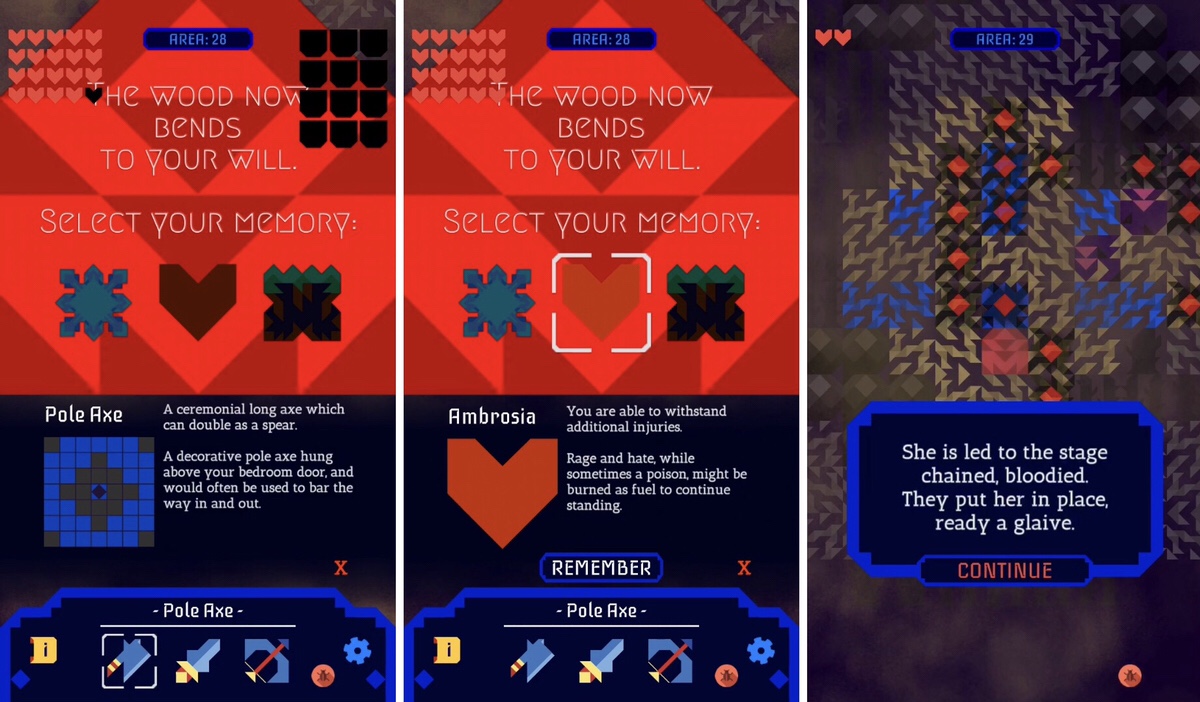 I appreciate the developers including an endless mode, but it’s missing a hook to keep me playing. Starting over from scratch isn’t rewarding like it should be in a roguelike. Things aren’t different enough each playthrough to warrant it, and trying to survive longer just isn’t enough of a carrot. Since I didn’t feel like playing through everything again, I decided I would see if I could manage with the two hearts on my story game. Maybe I’d still be able to get through it and build up my defenses again. So I booted up the game, tapped on STORY and watched in horror as the opening words of the game appeared on my screen. My game where I had gotten to area 29 was now gone completely, presumably because I started an endless game. I assumed they would be two separate saves, and there was no warning telling me otherwise. So at this point, I am officially done with Narakan. 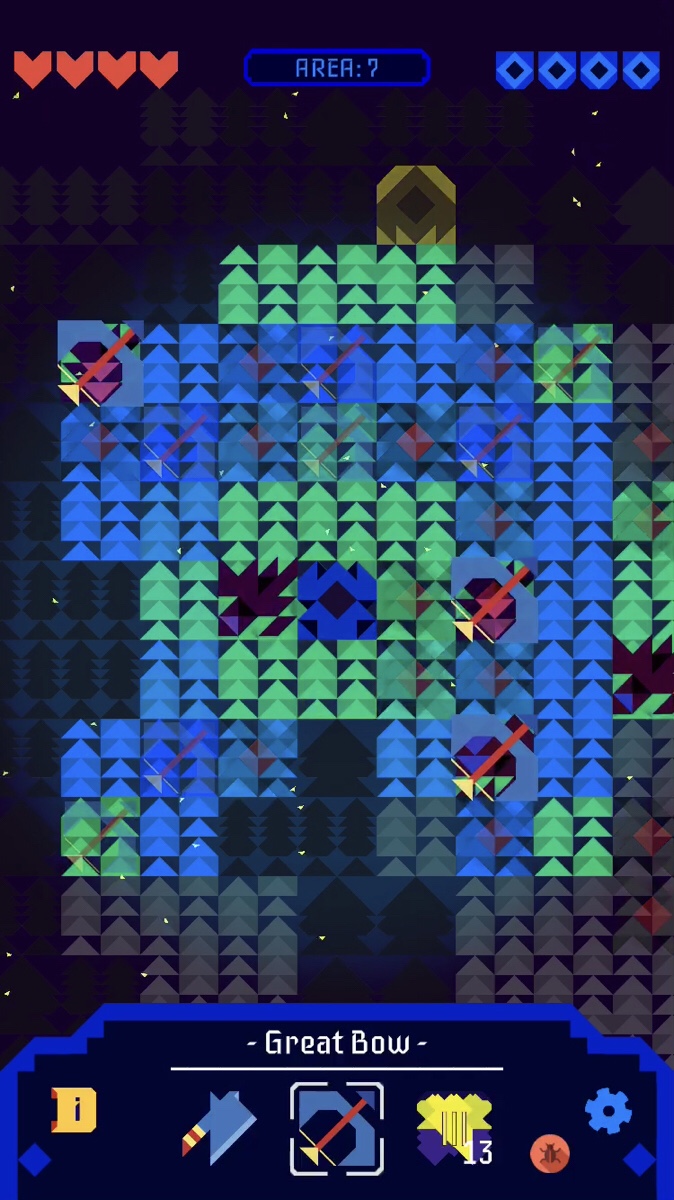 It’s unfortunate, because there are kernels of a good game here. Some mechanics just need to be built on to make it feel more exciting in area 20 than it did in area 10. It doesn’t help that each step takes longer than it should, especially when you’re just going through a clearing and not fighting any enemies. It wouldn’t feel like such a time sink if the game as a whole moved faster. It’s just too much of a slog. And then there all the bugs. Perhaps the persistent “report a bug” button should have been a red flag for me, but I ignored it and played anyway. I could have lived with the minor bugs, like swiping to move sometimes not working, or the game freezing up at a boss. But the game-breaking bugs are the nail in the coffin. 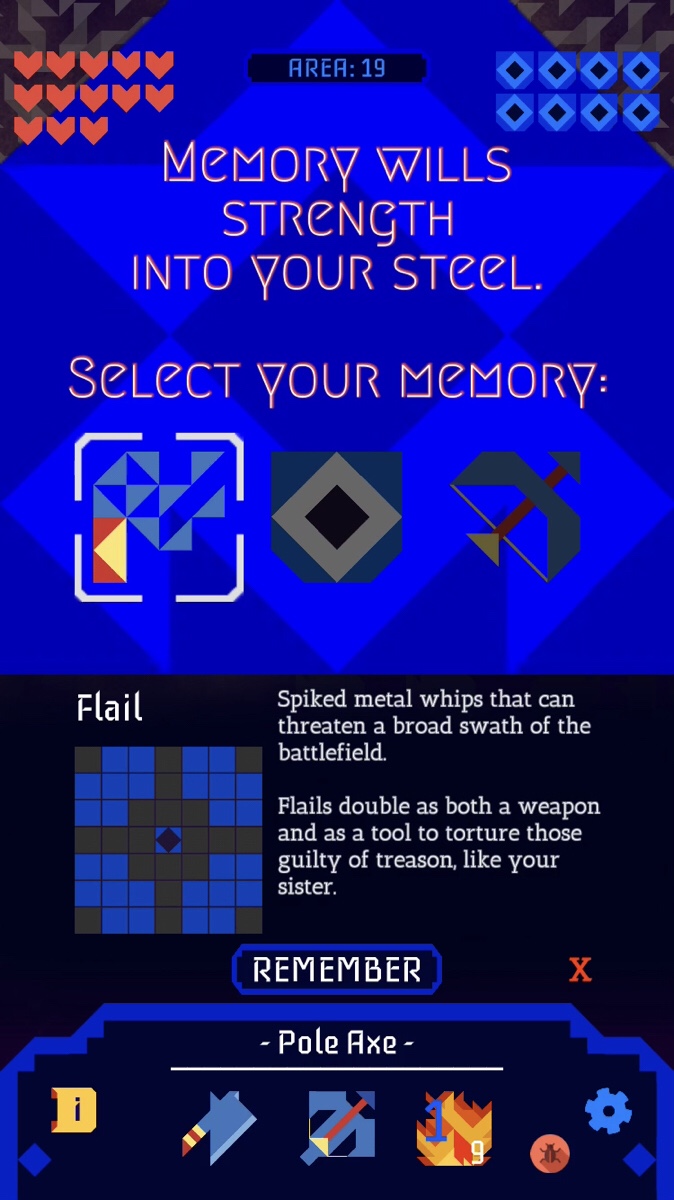 I wanted so much for Into The Dark : Narakan to be my new go-to portrait game for both long and short sessions. I’m always looking for endless high score chasers that are about strategy, not reflexes, that I can play in bed or between newer games. After playing Six Match for almost a year, I’ve finally started growing tired of it and could use a replacement. And at first, Narakan seemed like maybe it could be that game. Unfortunately, it feels too shallow and doesn’t have the lasting power to make it worth playing more than once, if even that much. There isn’t enough variation from area to area, so even without the bugs and glitches, I don’t think I would have recommended it. There’s definitely something here to build on, but it’s just not there yet. After about three hours with it, I didn’t feel like my time was well-spent. I hope the developers will work on it and build a more compelling game. But unless they pick up the pace, I don’t see myself giving it another try. If you’re still curious about it and the bugs don’t scare you off, you can download it here, but this is one forest you enter at your own risk.

And if you need help, try my walkthrough guide here.