Sometimes it’s fun to play the villain. That’s the idea behind Kingdom Rush Vengeance, the latest tower defense (TD) game from Ironhide. This time, you’re controlling an army of monsters instead of goody-two-shoes heroes. It’s not the first time a series has done this. In fact, one of my favorite TD games, Legendary Wars, got a sequel that did the exact same thing. Monster Wars flipped everything upside-down and had you taking control of the enemies from the original game. Kingdom Rush Vengeance does things a little different, since there’s more than one previous game to pull from. But the end result is a chaotic and fast-paced war where you get to control ghosts, gargoyles, skeletons and more.

If you’ve never played a Kingdom Rush game, the basic idea is that in each level, wave after wave of enemies will march down the paths and make their way to the exits. Your job is to protect those exit points and make sure no one gets through. On the main campaign mode, you have twenty hearts, meaning that twenty enemies can escape before you lose the battle. But each level has a star rating, so the fewer enemies you let through, the higher your score. To accomplish this, there are locations throughout the map where you can build towers. At first, you only have access to four towers, but as you progress you unlock more, for a total of eleven. The idea is to strategically place towers so they stop enemies before they overwhelm any one area of the map. You can also upgrade the towers with the gold you earn from killing enemies. And in a pinch, you also have a hero you can move around to help fight when things get hectic. Each hero comes with their own individual skills and spells they use automatically, as well as spells you can use independently of them. For instance, Veruk spawns a few goblins to fight at his side, and you can also summon demon-like Goonies to any spot on on the map.

There’s a lot of strategy involved here, as you can only take five kinds of towers with you in each mission. That means you first have to decide which ones will work well together and then place them on the map where they’ll do the most good. For instance, you might want some Dark Knights guarding the exit with some Shadow Archers close by for ranged attacks. My personal favorite is the Specters Mausoleum because their final upgrades include both gargoyles and the ability to temporarily possess enemies. It might not be the most powerful tower, but there’s something satisfying about seeing an enemy sorcerer under hypnosis turn another enemy sorcerer into a defenseless sheep.

That said, I do wish the game would be a bit forgiving at times and allow for more experimenting. From talking to others, I got a sense that there are towers that are more powerful, but sticking to the same towers all the time just because they get the job done faster is boring. So I would mess around and try to find my own personal favorites, even if they didn’t lead to victory quite as easily. That also meant I sometimes had to replay a level to get three stars because my original strategy only got me two.

The game in its current state consists of sixteen levels, which might not sound like a lot. But each one took me around twenty minutes to complete, so that’s a fair bit of content. On top of that, each each level has Heroic and Iron challenges you can take on, which limit you to one heart. In the Heroic battles, you still have several waves of enemies to beat, with some breathing room between them. But in the Iron battles, it’s one long wave and you’re also limited to specific towers. So if you haven’t had enough by the time you reach the end, there’s still a decent amount of replay-ability .

I should mention that this is the first Kingdom Rush game I’ve played to the end, though I did make it through most of Iron Marines. So it’s possible that where I had trouble, veterans of the series will breeze through without any problem. But since there are both towers and heroes you can only access if you pay cash for them, I wanted to see if it was possible for me to get three stars on the entire game with only the base content. I also took it upon myself not to use any power-ups that cost gems, as I see those as crutches. And although I did hit a few snags, in the end I managed to pull it off. So while I’m not thrilled about there being content locked away behind prices higher than the cost of entry itself, I think those with more experience than me should have no problem getting through the game without spending anything extra. 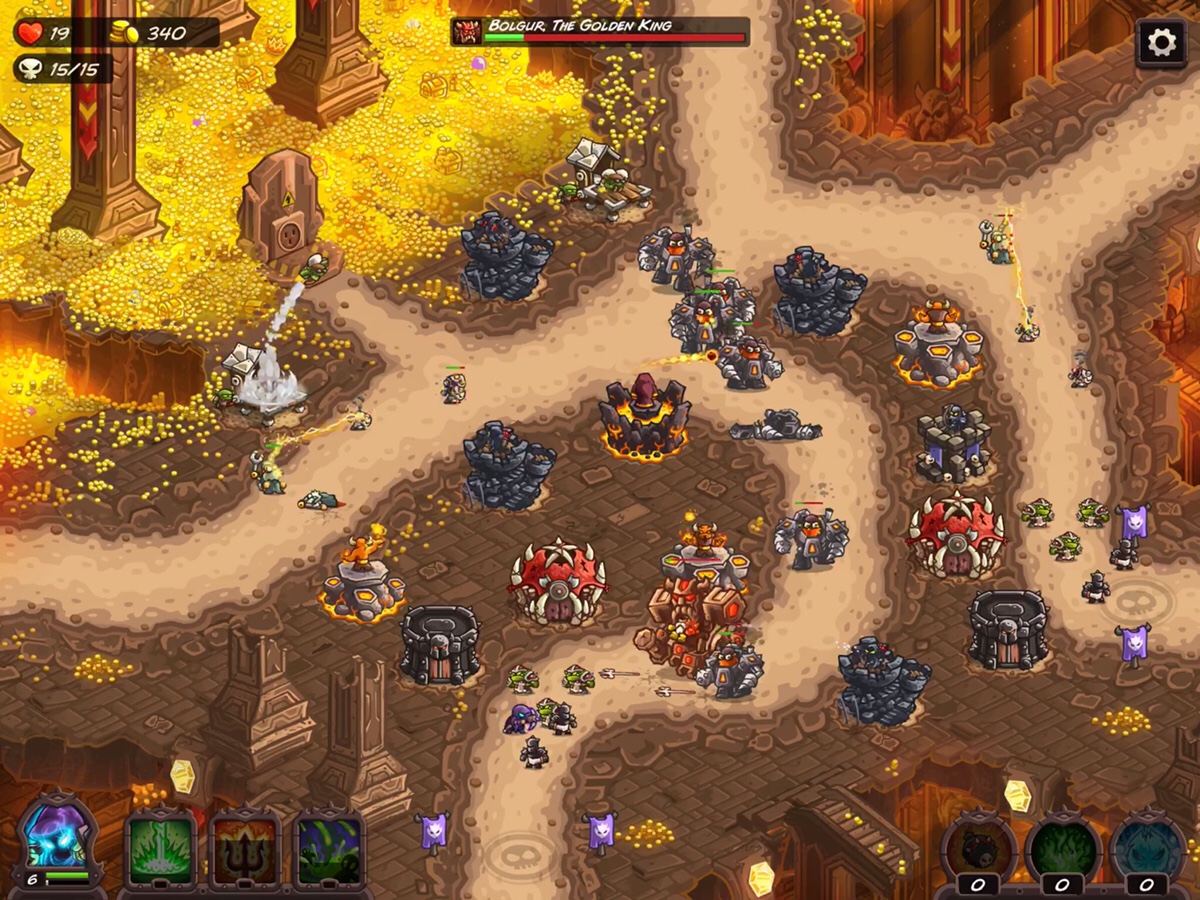 Because I’m on a version of the game that allows me to unlock all the extra content without spending money, I decided to give the five paid towers and some of the bonus heroes a whirl. It turns out, the extra towers aren’t necessarily more powerful, but they are fun to mess around with. The zombies are one of my favorites, as you end up with a small undead army guarding the exit. The Blazing Gem is also quite nice, as it continuously attacks a single enemy until it’s dead or it can’t reach it anymore. Like I said, I completed the game and got three stars without using any of these, but I’d be lying if I said I’d be completely ok with not having them if I had bought the game. It’s true, they’re not necessary, but players who can’t spend thirty bucks or so on the game will have a third of the towers and two-thirds of the heroes inaccessible to them. And then there’s the dragon Beresad, whose special skill is acid rain that hits every enemy on the battlefield. Between that and his passive skills, he seems pretty overpowered. And who doesn’t want to play as a dragon? But at $6.99, he costs more than the entire game, so there’s definitely going to be a large section of the player base that doesn’t get to use him.

It actually would have been nice if there was a sort of playground mode to test out the different paid towers and heroes before deciding whether to buy them. I’d even like that for the included towers, as I would often get pretty deep into a battle before realizing that I the new tower I was trying out wasn’t really the best fit. Since a battle could last twenty to thirty minutes, it sucks to find out near the end that you chose poorly. In fact, my biggest issue with the game was the final level. It takes place in two stages, and even if you complete the first stage flawlessly, you’ll have to replay both of you fail the second one. The second stage also had a new objective, where you had to help a monster get past several overpowered enemies. If that monster dies, the whole battle is over. And several times I managed to get to that point only to lose. I was close to giving up but finally managed to do it with a sliver of his life left. It was super frustrating to have to waste an extra ten or fifteen minutes on the easier half of the level that I had no problem with just to have another chance at the second half. I’m not a fan of games wasting my time and I almost ragequit. I’m glad I didn’t, but I still think it was unnecessary to punish players like that who aren’t able to pull off a win right away.

Despite some frustrations, I really did enjoy my time spent with Kingdom Rush: Vengeance. I’ve already started to go back and complete some of the Heroic and Iron challenges and I’ll probably try to beat them all at some point. I do think it’s a shame that six heroes and five towers are locked behind fairly hefty prices compared to the cost of the base game. But if you can ignore that and not feel like you’re missing out if you don’t bug them, there’s a great time to be had here. So if you’re ready to get your revenge against those pesky do-gooders, grab Kingdom Rush Vengeance here and storm the castle!

And if you get stuck, try my walkthrough guide here.