After waiting years, wondering if I’d ever get to play Gone Home on my iPad and pretty much giving up all hope, this December brought a huge surprise. With the help of publisher Annapurna Interactive, the Fullbright Company ported their multi-award-winning adventure game to iOS this past week. Since I was told a while back by co-founder Steve Gaynor that it was unlikely to happen, I asked if he’d be willing to answer some questions about the port and everything that led to this moment. If you haven’t played the game yet, don’t worry, as there are no spoilers below. You can also read my review to see what I thought about the game.

Appunwrapper: Hi Steve. Thanks so much for taking the time to speak with me about the iOS port of Gone Home. IΓò¼├┤Γö£├ºΓö£├╗m one of those weirdos who hates playing games on my PC, so I never got through it even though I had bought it. IΓò¼├┤Γö£├ºΓö£├╗m so glad I finally got to play it on my platform of choice, and wanted to pick your brain about the whole process of bringing it over.

So first off, I had asked a while back if you had any plans to bring Gone Home to iOS, as it seemed like a great fit for tablets. But you said it was unlikely to happen. Your main concern was the crouching and, in the iOS version, you just added a Γò¼├┤Γö£├ºΓö¼├║crouchΓò¼├┤Γö£├ºΓö¼├æ button. So what changed your mind? Why now?

Steve Gaynor: I think there are a few things. One is that we hadn’t really played a full first-person navigation game on mobile that we’d been really happy with. But design techniques have progressed along with tech in the last few years, and we found a scheme we were happy with, without over-engineering the solution or cutting important features from the original game. I’m kind of the opposite of you in that I wouldn’t normally play this kind of game on a touchscreen device, so it’s been really interesting seeing how our port partners handled the controls and tuning, and how we were able to contribute to that process with notes and feedback! It was pretty collaborative and I think it turned out well.╬ô├╢┬╝Γö£├¡

AU: On that same note, are you happy with the way the controls were translated to touchscreens?

SG: I’m not an expert on what touchscreen players expect, but it feels alright to me, and we tried to follow the lead of our port partners at Blitworks and our publishing partners at Annapurna, since they know the space better. I feel like I can play through the whole game well on touch, which is very exciting!╬ô├╢┬╝Γö£├¡

AU: I noticed achievements are missing, but aside from that, was anything else left out from the PC version? Or did you have to make any compromises to make it work?

SG: Not really! We actually didn’t have Achievements on PC for the longest time– we only added them in when we finally ported our console version features back to PC platforms. As far as I’m aware, everything else is intact, with adjustments for performance and so forth on a per-device basis. But everything that was in other versions of the game is in Gone Home on iOS.╬ô├╢┬╝Γö£├¡

AU: And on the flip side of that, was any content added to this version? Any new Easter eggs or just overall improvements?

SG: We were really happy with how Gone Home came out originally– to us it was a finished piece, so we haven’t added anything in new versions of the game… aside from adding some officially-licensed Super Nintendo cartridges to the Nintendo Switch version of the game, as a Nintendo-specific little wink and nod 😉 But aside from that, with all the versions we’ve tried to simply keep the new ports as faithful to the original game as we possibly could.╬ô├╢┬╝Γö£├¡

AU: What was your process for redesigning everything for the platform, and would you recommend it to other developers who had similar doubts as yours?

SG: For us, we partnered with Annapurna and Blitworks to create both the Switch and iOS ports– they have expertise in what iOS players expect, and the technical background to make it run on platform and look good. If it hadn’t been for these partnerships, we wouldn’t have gone forward with an iOS version. So if you’re feeling apprehensive, and you can find good partners with expertise that makes you feel you’re in good hands, it’s certainly one way to go! We’re happy with how things have come out so far :)╬ô├╢┬╝Γö£├¡ 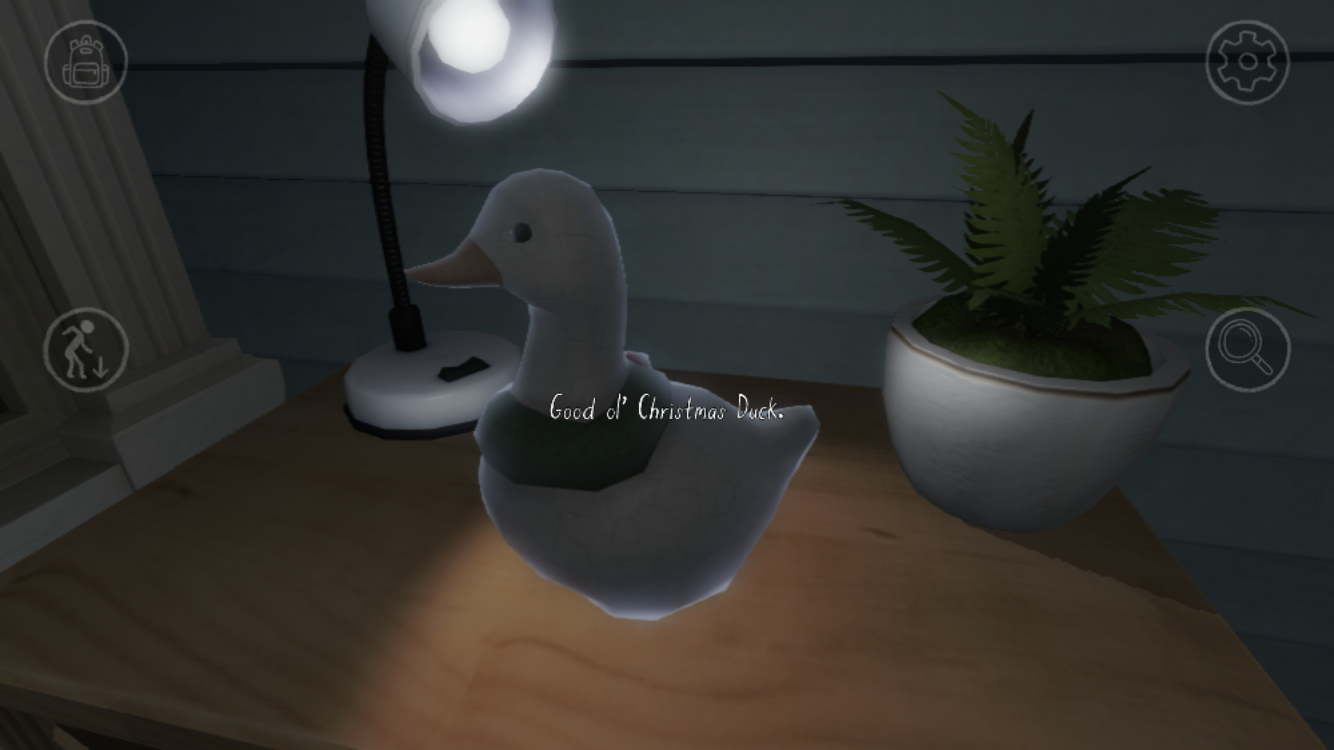 AU: I managed to somehow avoid spoilers of the game in all this time, so I knew nothing going in except what the gameplay is like. I, of course, expected a story-centric exploratory game with very few puzzles. Basically, the original Γò¼├┤Γö£├ºΓö¼├║walking simulator.Γò¼├┤Γö£├ºΓö¼├æ I assumed everyone else would know by now, as well, yet there are still App Store reviews giving it low ratings because of Γò¼├┤Γö£├ºΓö¼├║lack of gameplay.Γò¼├┤Γö£├ºΓö¼├æ Does that surprise you or was it expected?

SG: Ha, I think that’s going to be expected from here to eternity. You can still walk in to a╬ô├╢┬╝Γö£├¡modern art museum╬ô├╢┬╝Γö£├¡and overhear people saying “my five-year-old could do that” about abstract paintings, just like they were a hundred years ago. We’ve always known we were making a very specific game about a very specific thing– exploring a space to discover the story there, period– and in the case of Gone Home, you really get more out of it the more attention and exploration you put into it. So we hope that this will be a game that’s always a hit with people who really want to immerse themselves in what it contains– and for other players, it just might not be for them!╬ô├╢┬╝Γö£├¡

AU: That’s an interesting way of looking at it and a very good point! Now, I know itΓò¼├┤Γö£├ºΓö£├╗s only been a few days, but what are your initial feelings about the port? Do you think it was worth the effort to reach a wider audience?

SG: In our case, very intentionally, we passed almost all of the effort onto our porting & publishing partners– so again, if we hadn’t have groups we trusted to make this happen, it wouldn’t have happened at all. With the setup we had, I’m thrilled with how it’s gone, and I’m really excited that a whole new audience (like yourself!) can discover Gone Home, who would’ve otherwise never grabbed it on a PC or console. I think it is a really good fit on handheld platforms; being able to curl up with Gone Home in your favorite spot, like spending a few hours with a favorite book, feels really ideal.╬ô├╢┬╝Γö£├¡

AU: Android players have been asking if there are any plans to port it over there. What should I tell them?

SG: Nothing to announce at this time!╬ô├╢┬╝Γö£├¡

SG: Hah. Nothing to announce at this time 😉

SG: Hah, you cracked it– ghost doors!! Nah, this is actually not terribly uncommon with swinging doors in video games. It’s a harder problem to make doors that always swing in╬ô├╢┬╝Γö£├¡one direction, meaning you’d often be swinging them open into yourself. Does the door just stop? Does it push you out of the way? Does it clip through you like it’s intangible? Is there a complex first-person animation of grabbing the doorknob and opening it? Any of these solutions might work and have been done in other games– but for us we always wanted the player to be able to just walk straight through a door as they’re opening it and not have to think about it at all. So for us, doors that always swing away from the player made the most sense– and hopefully most people weren’t thinking about it while playing! We do still have some doors that open toward you– cabinets and such– and sometimes if you stand real close to them and open them, it can be a little frustrating how they only open partially and then stop when they hit you. Now imagine if that happened with full-sized doors that are three feet wide! We hope we arrived at the best solution for the game we were making :)╬ô├╢┬╝Γö£├¡

AU: Actually, I did notice that you can get in the way of cabinet doors and drawers. So yeah, I see what you mean. I figured it was something like that, completely international and not just you thinking doors work that way. 😛 I think the reason it stuck out to me is because in most adventure games IΓò¼├┤Γö£├ºΓö£├╗ve played, the doors either just automatically close behind you or they stay permanently open. But those games donΓò¼├┤Γö£├ºΓö£├╗t give you full freedom of movement, either. Anyway, thanks again for chatting with me, and especially for bringing Gone Home to iOS!