It will probably come as no surprise to those who frequent this site that I tend to prefer my games relaxed and thoughtful instead of fast-paced and chaotic. So if I stick with one that gets my heart racing and stresses me out, you know it’s something special. That’s definitely the case with the hardcore arena shooter, BACKFIRE. I fell in love from the first moments where I killed myself running into a wall, and couldn’t stop thinking about it until I beat the final boss. It’s the complete package, combining a unique art style with chill music, hilarious sound effects, worthwhile upgrades, and pure fun. If a proper endless mode ever gets added, I could see coming back to this game again and again.

BACKFIRE gets its name from the fact that your ship can only fire from its back-end. Clever, eh? Some enemies make it easy to kill them this way as long as you run circles around them and let them trail close behind you. But others will sneak up next to you just out of your gun’s range, or stay put until you get closer and then quickly strike. Others explode when killed and even when they get near you. You need to learn the enemies’ patterns and weaknesses in order to take them down and survive. For instance, spiked balls harm you, but they also kill your enemies. Everyone is of a single mind, out to get you, but accidents happen and they could occasionally end up killing each other. It’s so satisfying watching two harpoon fish collide in a puff of pink guts, no longer a threat. Even though things are fast-paced and hectic, there is some strategy involved. You’ll survive much longer if you get to know your enemy. 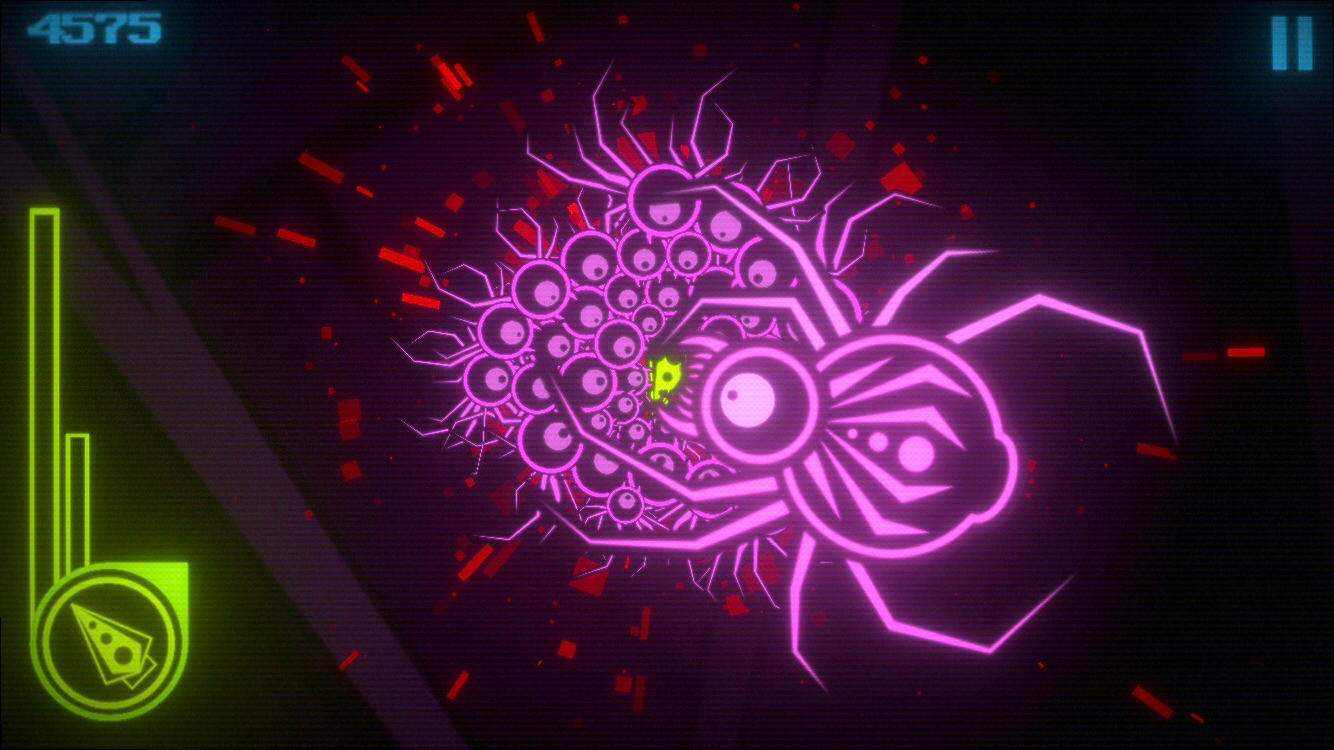 Controls in BACKFIRE are simple and touchscreen-friendly. The ship moves and shoots automatically and will run into a wall if you do nothing — which I learned the hard way. All you do is tap somewhere on the screen and your ship will head in that direction. Though I found it perfectly playable on both my iPad and iPhone, I eventually stuck with my iPhone because I liked being able to just use two thumbs instead of poking all over my big iPad screen. But I think the nature of the game means that you’d be fine with any device. Sadly, there’s no iCloud sync, so I suggest figuring out early on which device you prefer playing on and then stick with it. There are a lot of upgrades to earn, and I doubt you’ll want to do it all twice.

The game is broken up into four chapters with a boss at the end of each, and then a sort of endless mode after that. It’s not a roguelike, so you don’t have to beat the entire game in one sitting. After you beat a boss, it sends you to the next chapter, and you work on that until you pass it. I prefer it this way, as I probably wouldn’t have stuck with it if I had to start back at the very beginning each time. Highly skilled players may find it too easy, but I thought the challenge was just right. When I failed to take down a boss, it felt like I might be able to manage it on the next try. Enemies that seems impossible at first become less scary as you hone your skills and upgrade your ship. This meant that I never felt like throwing in the towel no matter how many times I died. 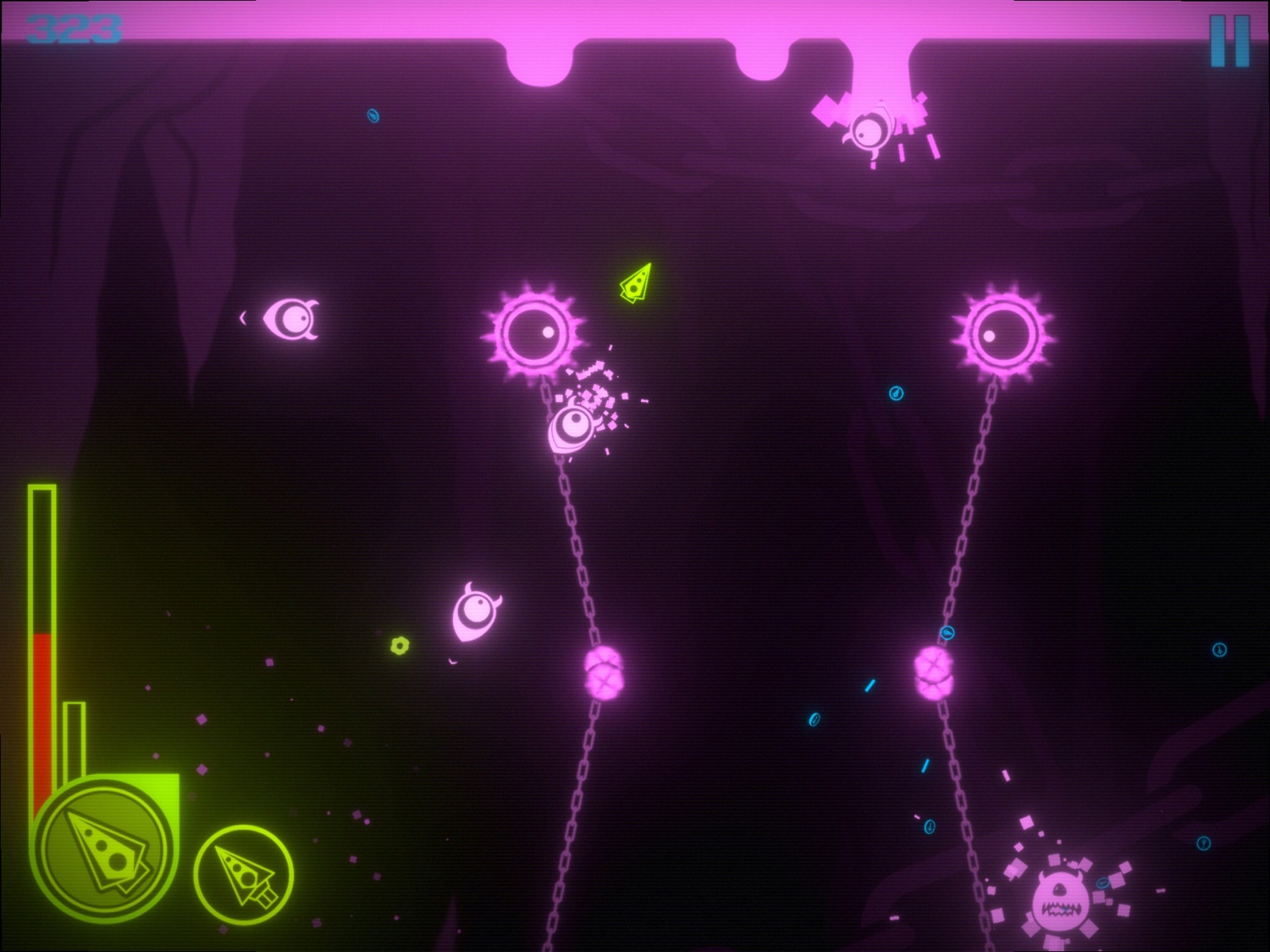 The game is generous with its currency, souls, so even if you die a lot like I did, you’ll be able to make steady progress. There’s a lot of different things to upgrade, too, from the basics like Health and Damage to more unique skills like Escape Power and Timeshield. Timeshield is one of my favorites, because it slows down time as enemies get close to you. It gives you a chance to take some out before you need to hurry up and get away from them. It uses up time fuel, so you can’t just expect to slow down time forever. But it’s incredibly useful. I also tried to upgrade my escape power early on, as it makes all the difference when you get surrounded by enemies all sucking the life out of you. If you upgrade that skill, you’ll have an easier time getting out from under them. 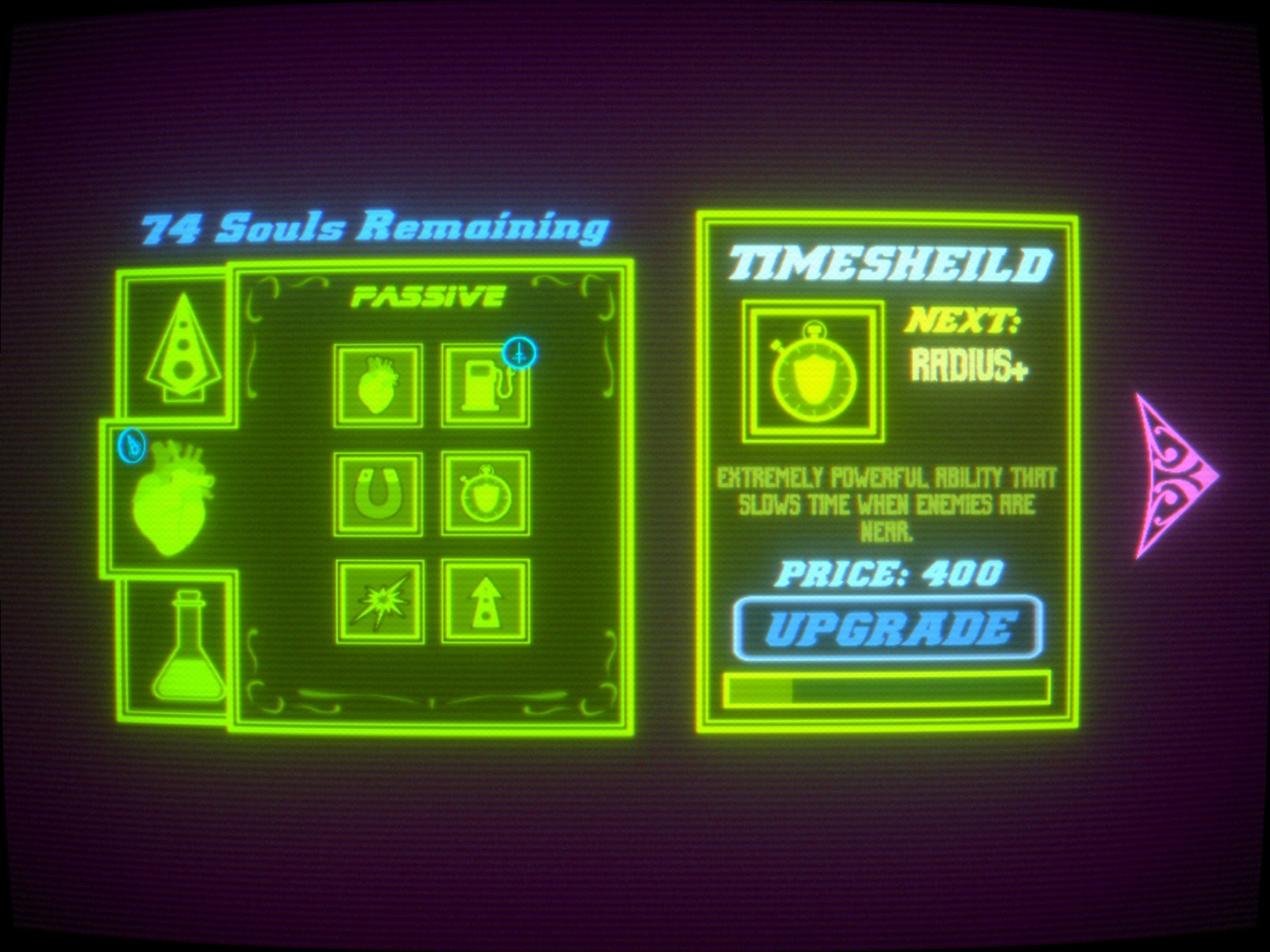 There are also secondary weapons to unlock that have limited ammo and don’t fire automatically. But I never could get used to them, and kept switching to them by accident on my iPhone, so I played through the whole game with just the standard gun. It can be pretty powerful when fully upgraded, and I preferred focusing on dodging and not having to worry about ammo or any extra buttons. But now that I beat the game, I may upgrade all the other weapons and mess around with them to see if I can get a handle on them. I do wish there was a way to access the shop from the menu, though. Currently, you’re sent there at the end of a game or the end of a chapter. So you have to purposely die if you want to change your weapons before a run. It takes a few seconds to get from the title screen to the action, so it’s not a super convenient way to get to the shop. It’s not the end of the world, but I would still welcome easier access to it. 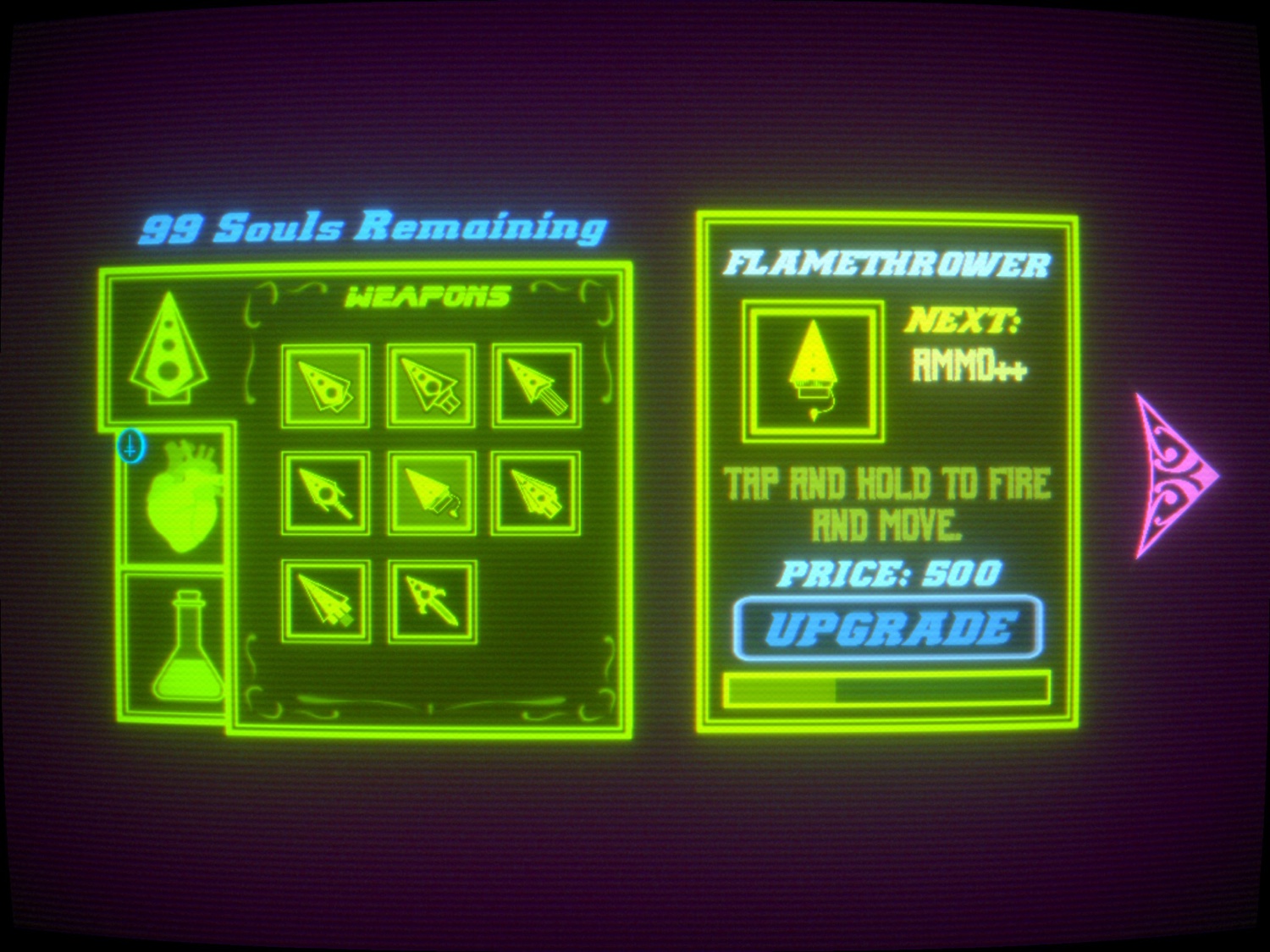 On top of dealing with the waves of enemies and the boss at the end of each chapter, you also have to watch out for the shrinking walls. You might have lots of room for one round, but then the walls will close in suddenly on the next one — even damaging you if you get hit by one. Some enemies aren’t too hard to handle in a small space, as they like to group together into one giant mass. But if you get those evil spiders that wait and then sneak up on you from the side, being stuck in small quarters with them can be quite the stressful experience. On top of that, the game gets harder each time you make it to the boss but fail to destroy it. So the first time you play a chapter, you’ll get easier enemies. But if you don’t kill the boss, the enemies will get harder next time. I had a lot of trouble with the spider queen’s final form, so I ended up getting entire runs that were mostly the big sneaky purple spiders in tiny rooms. It definitely honed my skills, though! 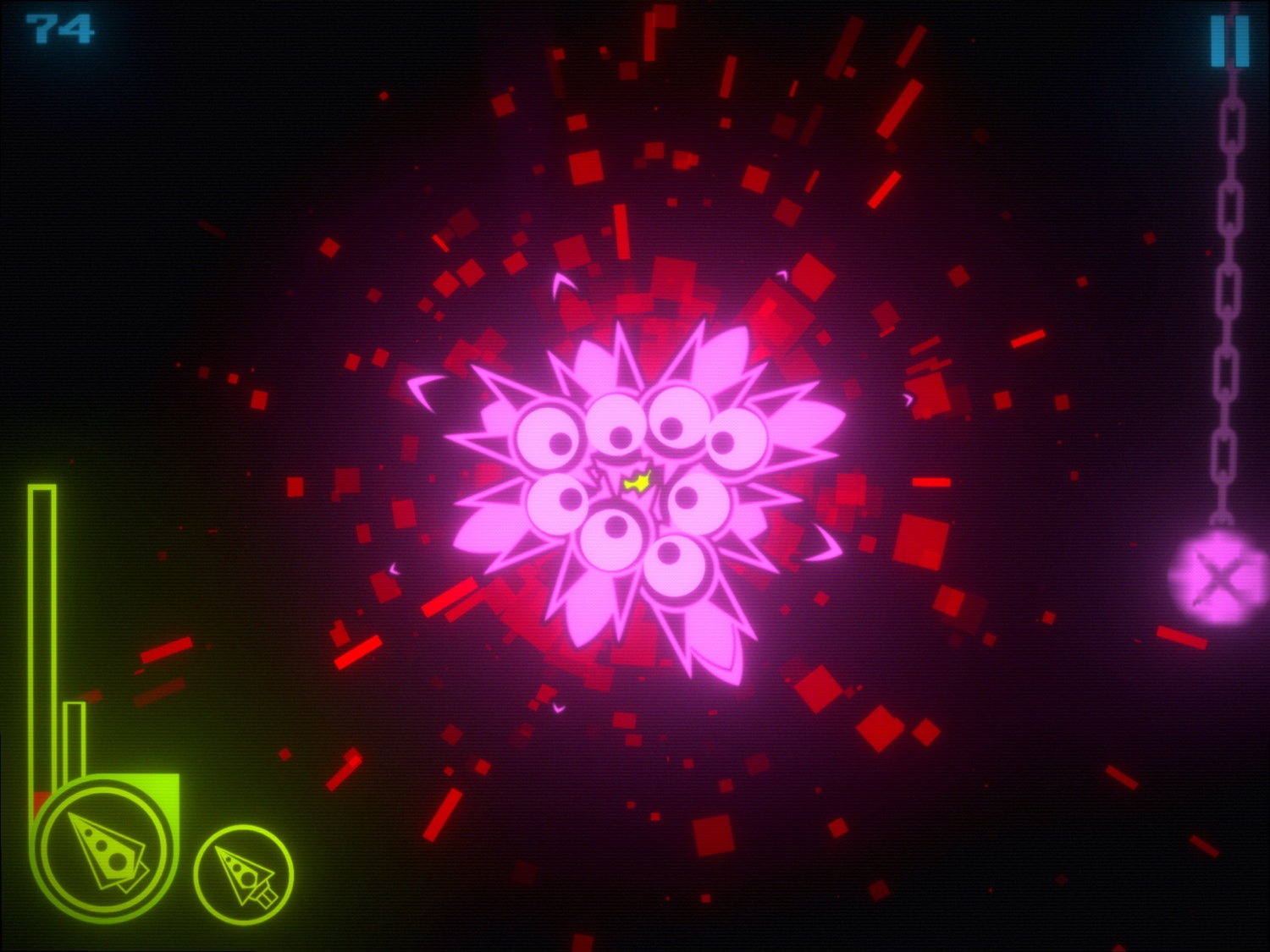 As much fun as the gameplay is, it’s the little details that kept me coming back for more. From the neon green and purple color palette, to the way enemies slowly pop out from the walls, to the way red pixelated blood covers the screen when you die. I love how all the enemies have a single big eyeball, so that when they swarm around you it looks like you’re being attacked by a bunch of eyeballs. They’re like nightmares but a little too cute to be truly scary. The sound effects also made me grin from ear to ear, with the ship’s cartoonish yelling when it’s taking damage, and the creepy sounds the different enemies make when they die or emerge from the wall. The game oozes character and all these little touches make it hard to put down. 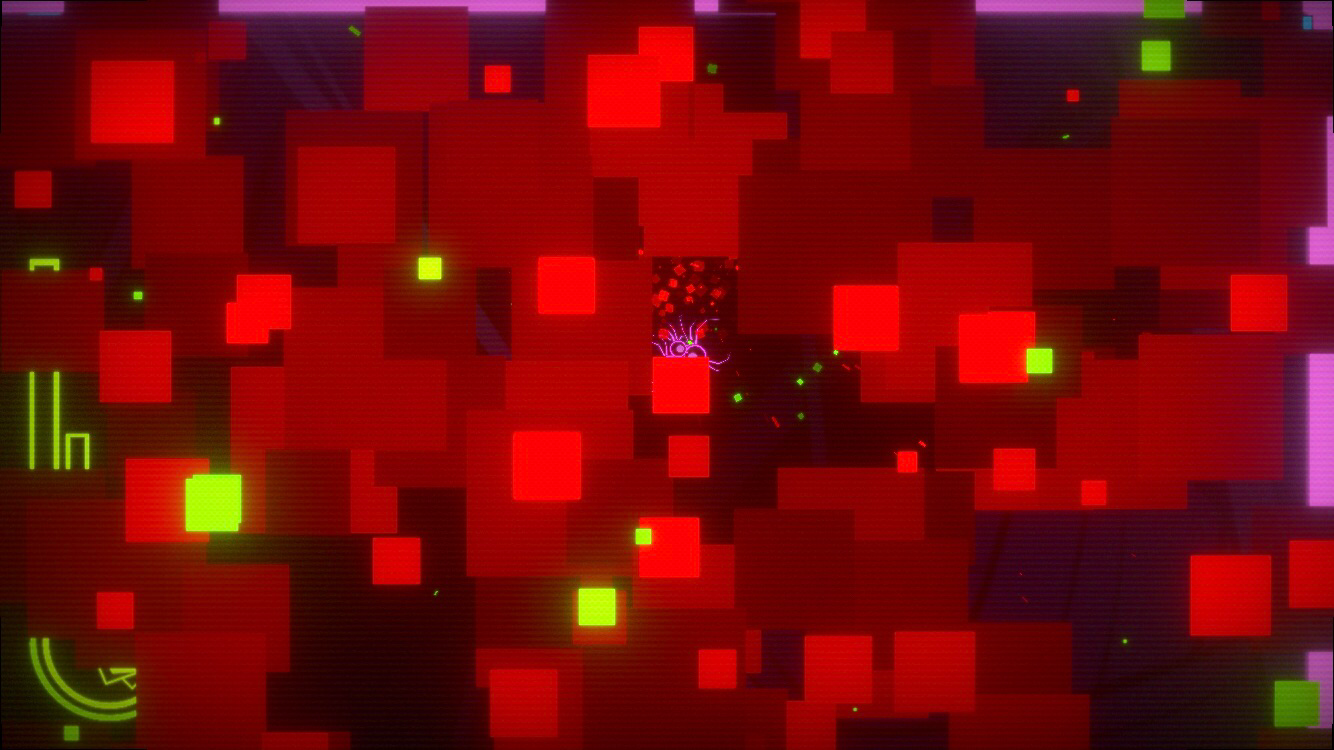 My only real complaint about the game is that there’s not much to do once you beat the four bosses. The endless mode isn’t really endless and it also has no scoring system, so other than earning souls to max out all your upgrades, there’s not much reason to play it. There’s also no way to replay the game without losing your upgrades. A New Game+ mode would have been welcome, or at least a way to replay old chapters without losing my upgrades. I don’t know if anything like that will be added, but the developer still has plans for a proper endless mode with leaderboards. As is, the game is pretty much a must-have, but once it gets that update, it should be an instant classic.

BACKFIRE is one of those rare gems that combines solid, satisfying gameplay with perfect audio and visuals. It was built from the ground up for touchscreens instead of being ported from other platforms, so it feels great on an iPhone. And it was done so without all the extra baggage of ads and in-app purchases, even though it could have easily gone that route and been far less enjoyable. BACKFIRE hits that sweet spot where it gets your heart pumping but never gets overly frustrating to the point that you want to quit. I would recommend it to just about anyone who’s willing to play a reflex-based game. The upgrade system eases you into things without feeling like a huge grind, and those who find it too easy can try and challenge themselves to use fewer upgrades. I could probably keep gushing about the game, but you’re better off playing it than listening to me talk about it. So grab BACKFIRE here and squash those evil spiders.

Sky: Children of the Light – Vault of Knowledge Spirit and Wing Locations Guide