Who can resist a cartoony hand-drawn dungeon crawler with puntastic humor and a simple control scheme that’s a perfect fit for mobile? I know I can’t, which is why I was so excited to play Ponywolf’s Knights of the Card Table. Meteorfall was one of my most-played games of 2018, so I was hoping it might scratch a similar itch and provide another compelling experience that I would want to return to over and over. Unfortunately, the game does not have the same pull for me, and after completing about a third of it, I’m not sure I have any interest in continuing. It’s not necessarily a bad game, but also not one I’d choose to play over all the other options out there. Continue reading to find out why.

Knights of the Card Table may have cards as its central theme, but it’s not a deck-building or trading card game. Basically, each level has you make your way through a dungeon that consists of cards laid out in front of you. Your character is on the left and new cards are added from the right. All you do is tap a card to use it. If it’s something like a power milk or health drank, it will give you extra strength or restore some health. If it’s a monster, you’ll roll a die and whatever number it lands on, you’ll hit the monster for that amount of damage. If your number is equal or higher to its health, it will die and you’ll escape without a scratch. If you roll something lower than the enemy’s health, you’ll take damage equal to its strength. So, as you can imagine, there’s some luck involved. If you only ever roll ones, you’re unlikely to survive no matter how well you strategize. In non-tutorial levels, the dungeon is randomized, as well, so that will also play a factor. If you get a whole long string of monsters in a row without any health potions, you’re going to need a massive amount of luck with those dice rolls or you’re dead. You can drag cards around to change their order, but that doesn’t help you with cards you haven’t seen yet, and it doesn’t help you if all the cards are strong monsters. 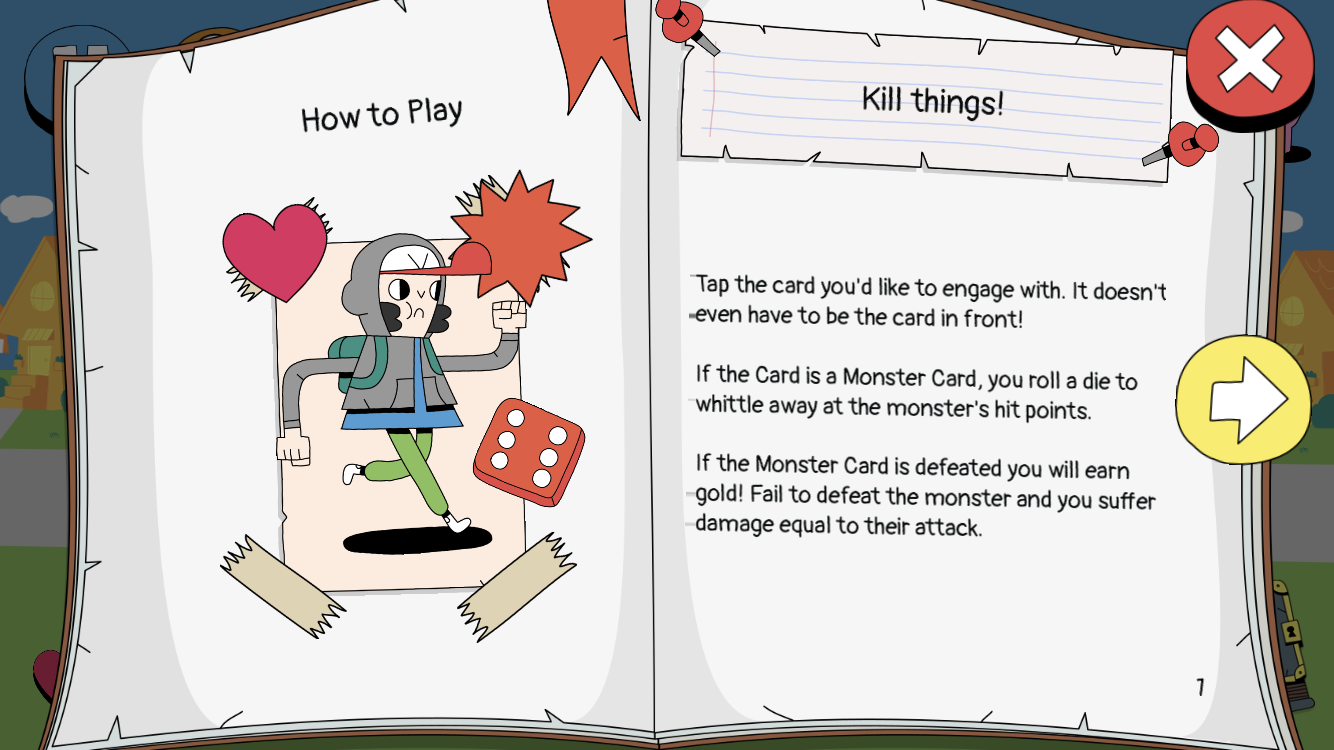 There are some ways to mitigate your luck, but they’re not fool-proof. As you play, you’ll unlock weapons, shields and playable characters. These can offer you bonuses on top of the defaults. For instance, a shield might give you a dodge chance or an extra layer of armor so you can survive a little more damage. A new character might give you a higher critical hit chance, which from my understanding means you have a chance of throwing two dice at a time instead of just one. And new weapons can give you all sorts of perks, but the most notable is dice with more sides. You start off with four-sided dice, but the next weapon you unlock gives you six-sided dice with one caveat — anything you roll will have negative one damage. So if you roll a six, you’ll only do five damage, and if you roll a one you’ll do no damage. You can swap out weapons mid-dungeon if you see one of them is not working out for you. Perhaps it makes more sense to use an eight-sided die against a monster with four health, and risk doing no damage at all. Of course, power milks give you damage bonuses as well, but you’re again reliant on the luck of the draw. You may get a whole bunch in a row or none at all.

There are also magic spells that help you take on multiple monsters at a time, but you can’t really rely on them showing up. There are, however, bonuses you can earn, such as a damage bonus for killing three enemies in a row, or a power bonus for drinking three milks in a row. You also get bonuses for rolling three of the same number in a row, but since there’s no way to control that, it’s not something you can rely on. It’s just a nice surprise when it happens. I also don’t see any way to predict a critical hit, which would have been welcome. If I knew I’m about to throw two dice instead of just one, I’d use it against a stronger monster and not waste it against one with only two health. It’s frustrating to do eight damage against a weak monster and then roll a one against a monster with five health. If you do die, though, you can either restart the dungeon or eat an ice pop to continue. I’ll discuss that more in a bit. 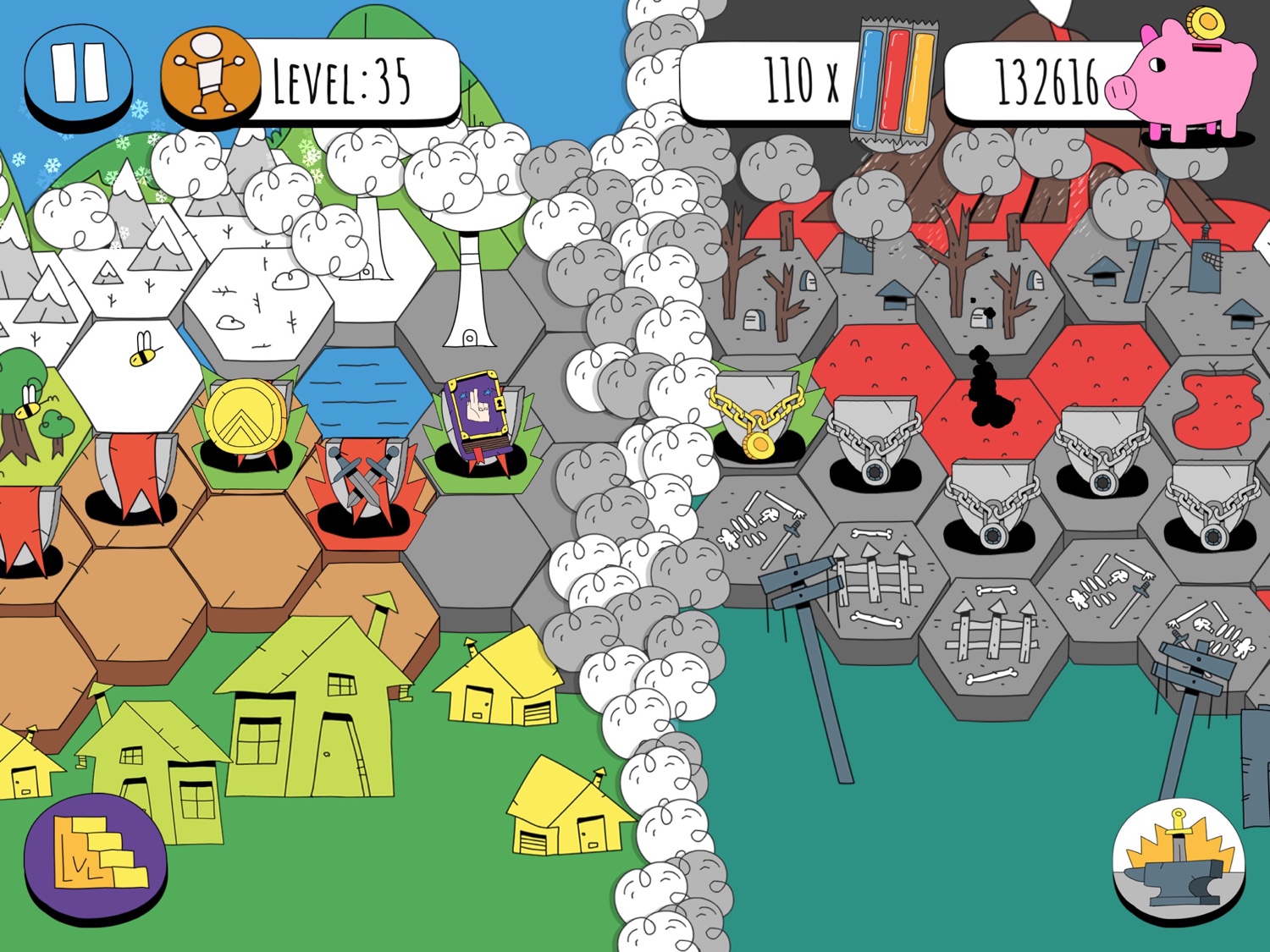 All these things seem like they would make a pretty compelling game. And at first, that’s the case. But even if the random elements weren’t so harsh, there’s other issues I have with Knights of the Card Table. The first thing I noticed was that once you complete a dungeon, you need to spend gold coins to unlock the next one. You also need coins and ice pops to buy the weapons, armor and characters you unlocked through play. It hasn’t been a problem yet, as I’ve been earning way more gold than I can imagine ever needing. It may be an issue further down the line, but a third through the game, it just seems like a tacky remnant of a free-to-play game going premium. And that may be the case, since it’s free with ads and in-app purchases (IAPs) on Android. As a paid premium game, I can’t think of a single reason that the coins even need to exist. Completing a level and unlocking the next one should be enough to play it. And earning new weapons and armor through play should be enough to be able to use them in battle. In its current state, it makes earning coins in a dungeon feel like a waste of time and energy. Perhaps if you were being scored in some way by those coins, it would be more meaningful. But as is, it just waters things down. And from browsing prices for some characters, I could see how the ice pops can become an issue when you need a hundred to purchase one character. 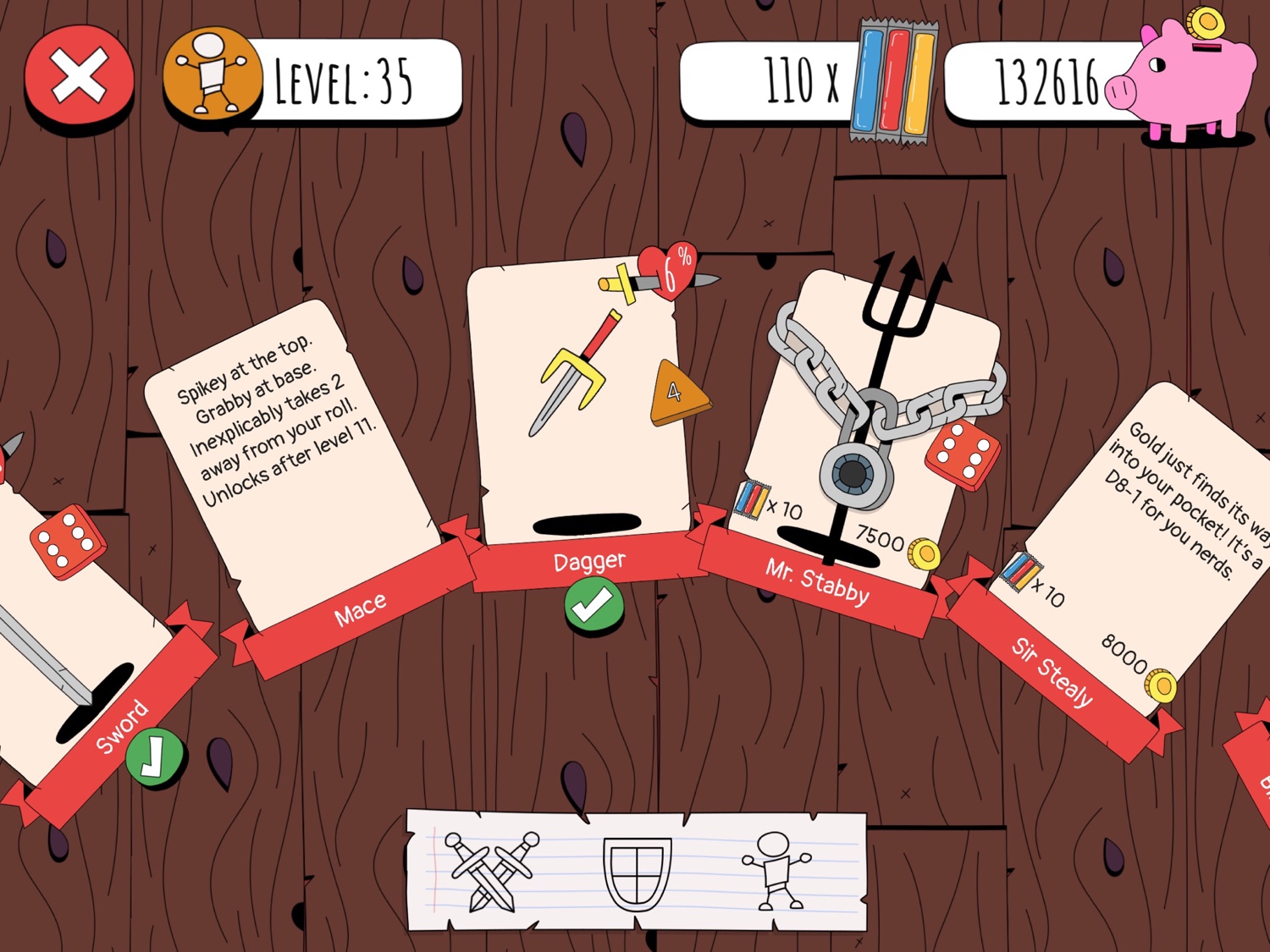 Right now, the main issue for me is the slow progress and repetitive nature of the whole game. Even though new types of enemies and new hazards are added, my strategy pretty much remains the same. I don’t feel like I’m playing much differently now than I was in the beginning, except I have a slightly better weapon and I sometimes get offered better bonuses between floors, like stone hearts. As I progress, it seems like things are getting more reliant on luck than strategy. New hazards like chained cards don’t really force me to learn a better strategy — they force me to throw out all strategy, because I have no option but to play the cards in the order given. There’s not much you can do to prepare for these things, as I’ve sometimes started a dungeon with a chained card right at the front, or behind several monsters. That means I can’t guzzle a milk potion, or try to freeze them, or even use the spell that would unchain it. 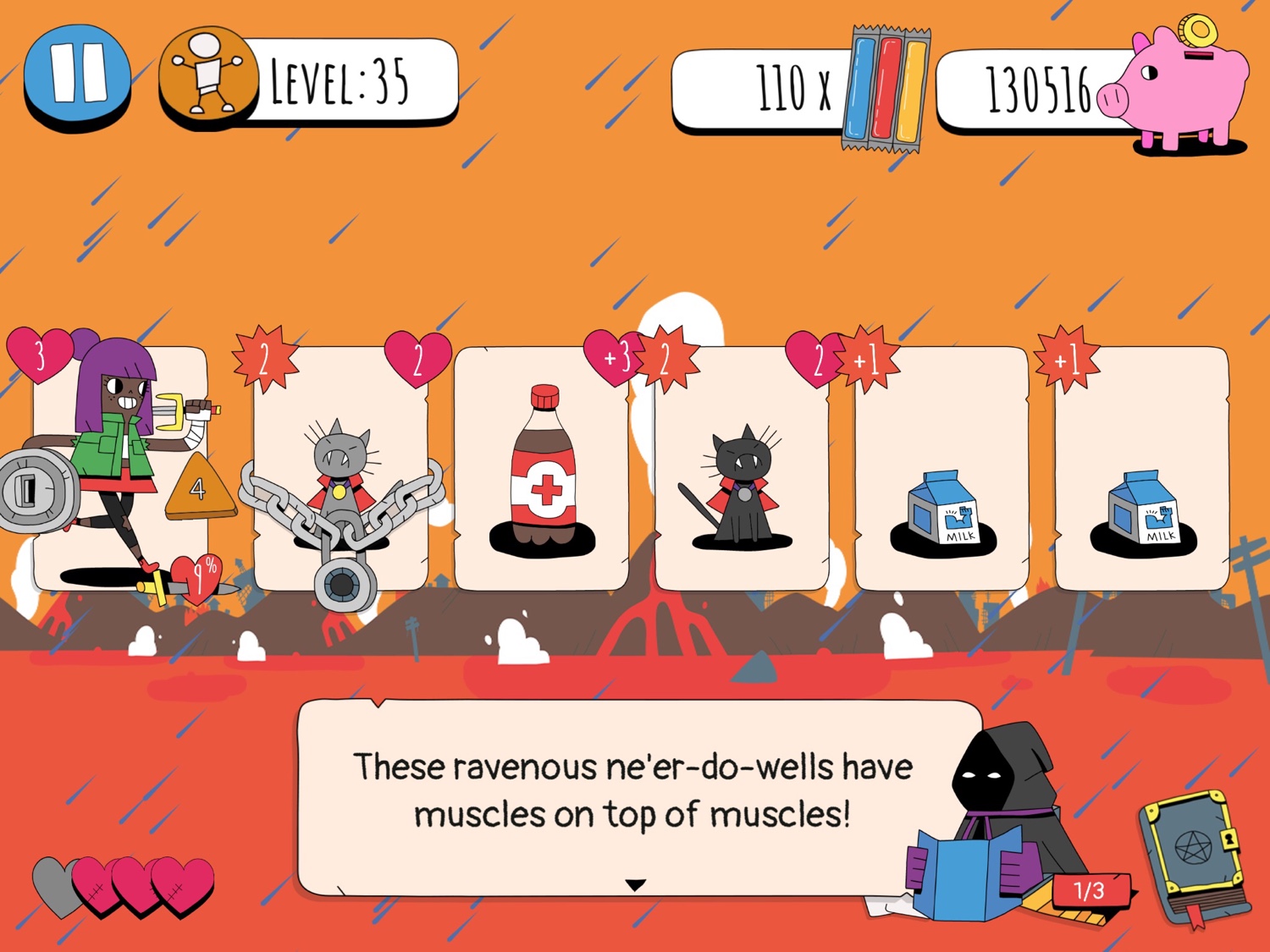 Perhaps having some skills or power-ups that could be used at any time would help me feel like I have more control over my destiny. As is, the deeper I get, the more it seems the game wants me to use ice pops to overcome death. And that just makes it feel more like a free-to-play game. I also don’t see any reason not to use them, other than concern about running low. There doesn’t seem to be any penalty for using a continue. In fact, I saw one of the objectives to level up was to use an ice pop to cheat death, which struck me as odd. I never really felt like I had any skin in the game. I could impose challenges on myself not to use any continues, but I didn’t see any reason other than pride. In the end, it probably makes more sense to just use them to get through the game instead of replaying the same dungeons over until the dice roll in your favor.

At the moment, I’m a little more than a third through the game, which took me about two to three hours, and my options are very limited. New and stronger enemies are being added at a fairly rapid pace, but my tools remain the same. In the entire first third of the game I unlocked only three new weapons, three new shields, and one new playable character. I can see I’m a few levels away from unlocking another weapon, but after that they get very spaced out. I still have eleven weapons, twelve shields, and five characters to unlock. So why have I only unlocked a tiny fraction of them at this point? Using my old weapons against new enemies makes me feel wholly unprepared for battle and far more reliant on lucky dice rolls or ice pops. Even if I had been interested in continuing, I’m pretty much at a standstill. Although, I have noticed that if I restart a dungeon, I could end up with a layout that’s much easier than on my last try. Still, I’m not sure why they would lock away so many of the upgrades for so much of the game, unless there was a way in the free version to buy them ahead of time. But as is, I don’t feel like I’m making tough decisions so much as just using what the game forces on me. To cut to the point, the game feels imbalanced. And that just makes me wonder yet again whether it’s because it started off as a free-to-play game.

I wish Knights of the Card Table allowed more room to strategize, as it feels way too limited and reliant on luck at the moment. Other card games force you find ways to deal with bad hands, but you usually have more tools at your disposal. Choosing between three weak weapons and leaving everything else to a roll of the dice doesn’t make for a very deep or satisfying experience. There’s still a lot to like here, from the artwork, to the music and punny humor. Even the gameplay is enjoyable up to a point. But it doesn’t progress at a meaningful pace and starts to feel repetitive. At times I wondered if it might have been more fun as a high score chaser, where you try to survive as long as possible, instead of battling through individual dungeons. There’s a lot of lost potential here, as I can see the building blocks of a really solid game if a few changes were made. But as is, I wouldn’t really recommend it. If you do decide to buy it, I suggest playing it in short bursts, as it can wear itself thin over long sessions. If a roll of the dice tells you to give Knights of the Card Table a try, you can download it here. And if you need help, you can try my walkthrough guide here.