I didn’t realize how enjoyable full motion video (FMV) games could be until I played Contradiction on my iPad, and later Her Story. Though very different games, they both use live footage to make you feel like you’re part of the story or playing an interactive movie. FMV seems especially popular with murder mysteries, and that’s also true of the latest one to make it over to iOS, The Shapeshifting Detective. As the name suggests, you play as a detective who can change into anyone he meets in order to trick unsuspecting murder suspects into spilling information they wouldn’t otherwise. It’s a pretty useful skill to have and also makes for some interesting storytelling. While the game can be a little rough around the edges, there’s enough here to like that I’d recommend it to any FMV or interactive fiction fans.

A young woman named Dorota Shaw has just been murdered in a small town named August, and Chief Inspector DuPont is worried there could be a second victim if the killer isn’t found quickly. That’s where you come in. You play as Sam, or at least a shape-shifter who’s taking on the identity of a Sam for the sake of this investigation. There’s a second, underlying mystery of your own identity and past, and where your powers come from. I’m not sure if it’s ever fully explained no matter how many times you play the game, but I liked that extra layer of uncertainty. As you can imagine, there’s a supernatural theme here, and the three prime suspects are tarot card readers who predicted the murder. You need to ask around and find out if they merely foresaw Dorota’s death or were the cause of it. 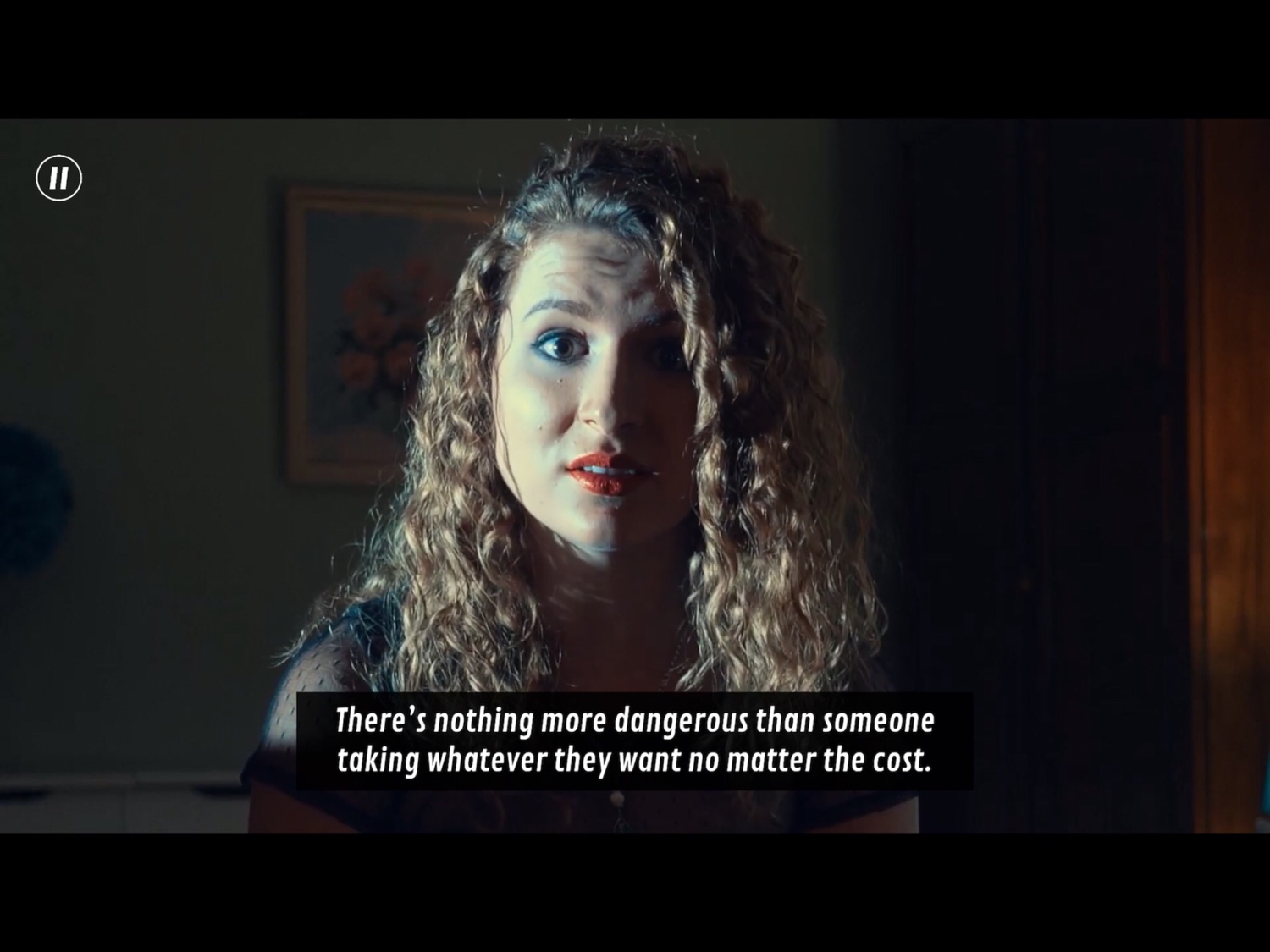 Most of your time will be spent at the guesthouse, talking to Violet, the owner, and the other guests, the three tarot card readers. You can also take a cab ride to the chief inspector and any other characters you unlock, such as Dorota’s boyfriend Oscar. As Sam, you can only learn so much. But if you go to your bedroom, which has a secret back door, you can change into any of the characters you’ve met. For instance, Lexie and Bronwyn may have lied to you about being together at the time of the murder, but you can get the truth out of them by changing into one and talking to the other. Then you change back into Sam and pretend you’re just a really good detective. Sometimes characters will give you clues as to who to change into to get more info from them, but usually you’ll have to experiment to uncover secret romances or dark pasts.

Although the entire game is made up of dialogue choices, you can’t simply exhaust all options to learn everything. There are certain questions that will get you more information than others, and sometimes asking one question will make another disappear. It’s also possible to say the wrong thing and cause a suspect to clam up. To complicate things even more, the game has a unique mechanic where you can choose to delete a line and remain silent instead. Sometimes that could cause you to miss out on an entire string of narrative, but it could also get a suspect to open up. On occasion, it might simply be the difference between exploring romantic opportunities and keeping things professional.

Speaking of which, I liked how pretty much everyone you meet is very flexible when it comes to sex and romance, so Sam’s lack of a voice or portrait means you can project your own gender onto the detective. Love triangles abound and you can choose to get mixed up in them or stay out of it. The game isn’t really judgmental in that regard, which is pretty refreshing. 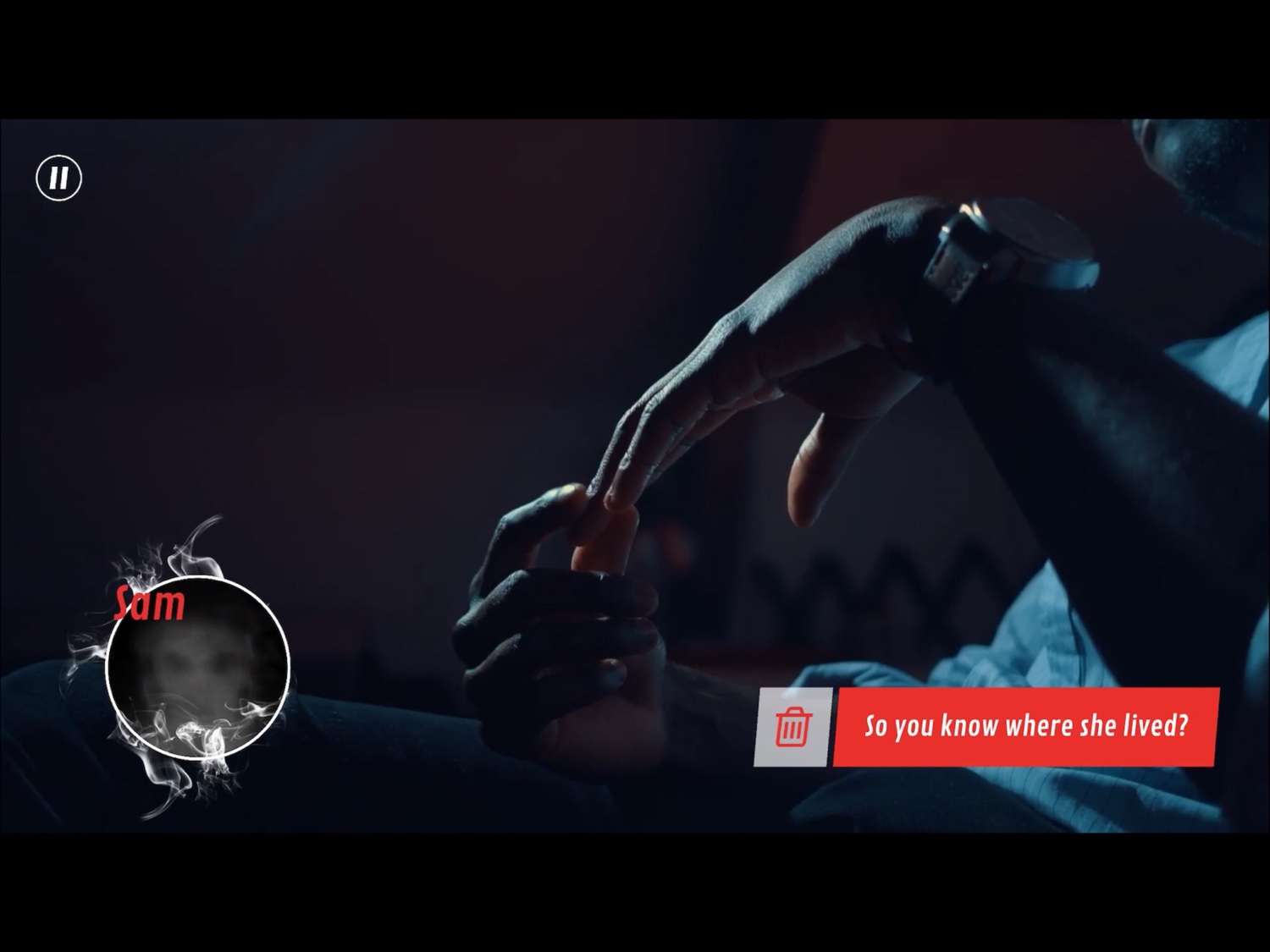 Not all the dialogue or acting is on the same level as that of Her Story or Contradiction, but nothing’s cringe-worthy enough to make me roll my eyes or want to stop playing. And there are some actors who made their way over from Contradiction, like the super expressive Rupert Booth as Chief DuPont. He probably shouldn’t play detective in every FMV game, but he was certainly a welcome sight here and fit the role perfectly. Violet seems to get the most screen time, and for good reason, as I found her to be the most compelling character. She’s played by Aislinn De’Ath (no, that’s not a typo) and I was constantly torn between thinking she was the murderer and not wanting her to be. I’m convinced there’s still more I can learn about her, and I may play again just to fill in those blanks. 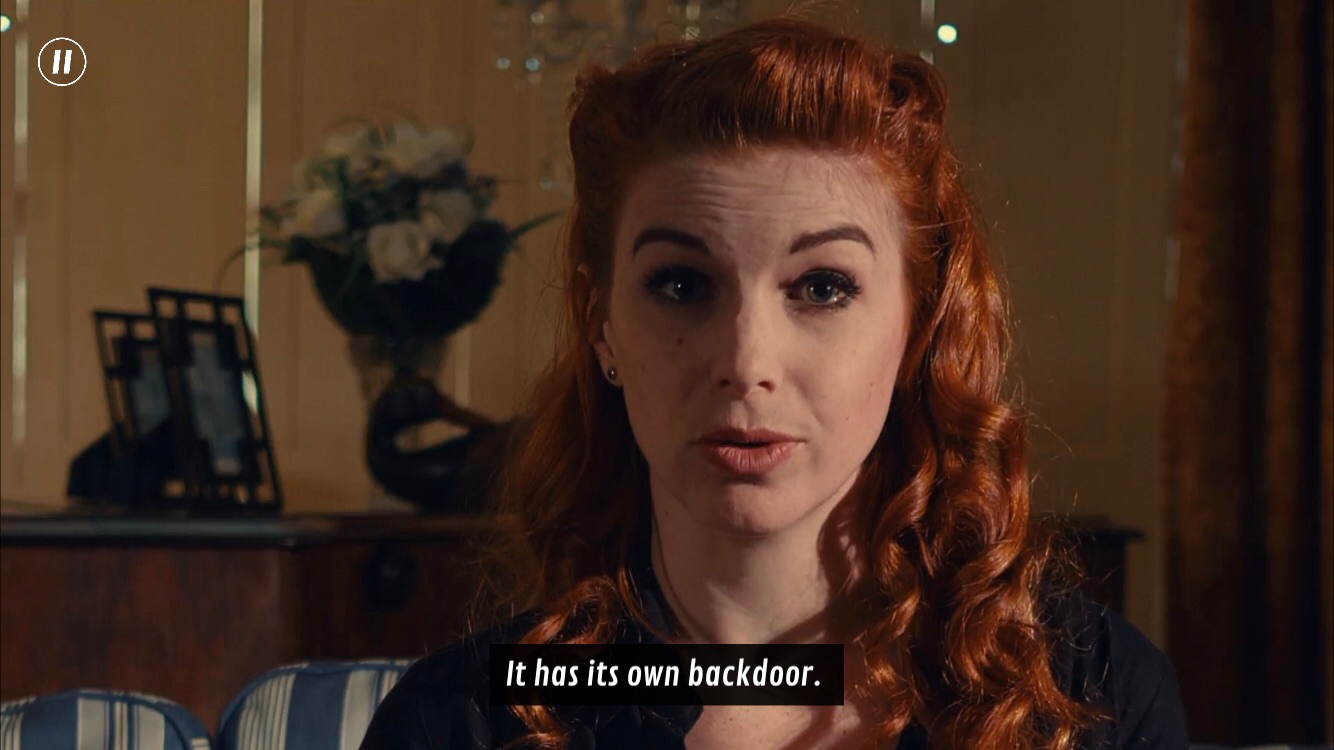 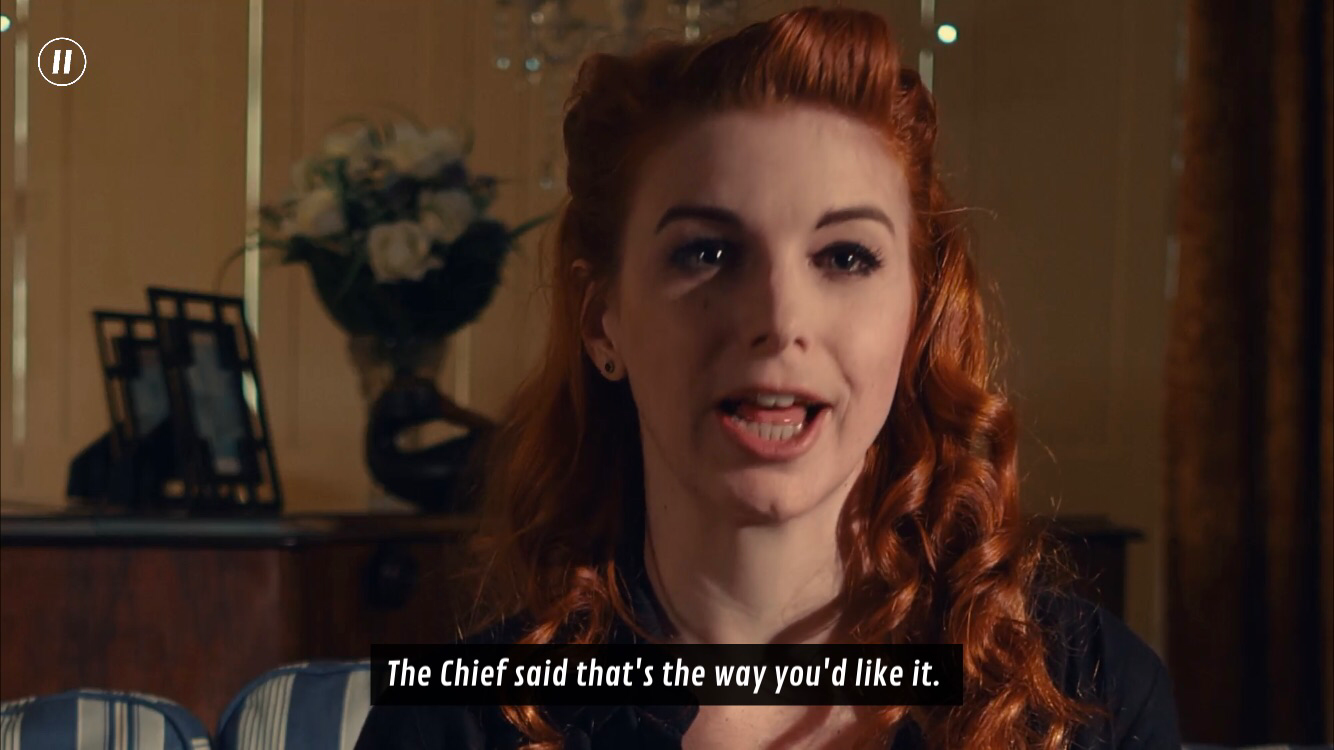 Another interesting twist is that the killer is randomized each playthrough from three different possibilities. I’m not exactly sure how this works, as I don’t think the dialogue throughout changes, except for everything after you identify the murderer. But the chapters progress similarly to Contradiction, with certain interactions pushing the clock forward another hour. You can either let the game lead you to the next chapter when it wants, or stay and snoop around a bit more to see what else you can learn. On my first playthrough, I just followed along with it and by the end I didn’t feel like I really knew enough to identify the killer. I hadn’t even changed into all available characters. I guessed correctly, but no one discussed the motive or even what would have led to that conclusion. There was no “aha!” moment you get at the end of murder mysteries. Just a pat on the back for choosing correctly. 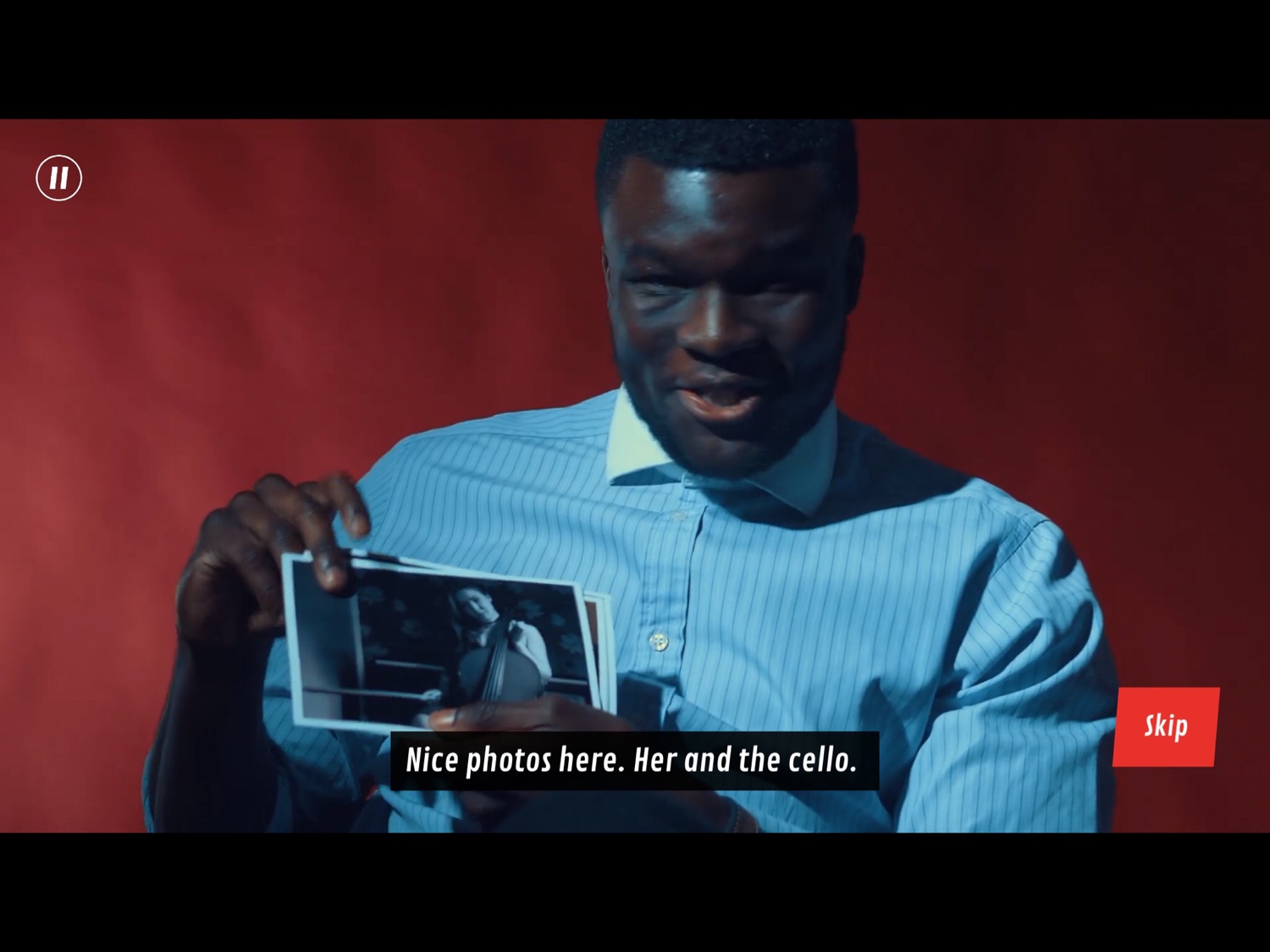 I didn’t know what to make of it, so I decided to start another playthrough. Thankfully, you can skip cutscenes and dialogue on subsequent runs so you don’t have to sit through footage you’ve already seen. Instead, you can focus on trying to get new responses from characters. I also made sure to spend more time in each chapter, changing back and forth into different people to learn as much as possible. Even though I didn’t identify the killer correctly this time, I felt like I knew a lot more about what was going on and it made more sense even without that “aha” moment. Also, it meant I had to confront the killer head on, so I had more closure than simply choosing the killer and never hearing from them again. I still feel like there’s some gaps in my knowledge, but the second playthrough and ending were much more satisfying, so I’m glad I didn’t stop after my first. 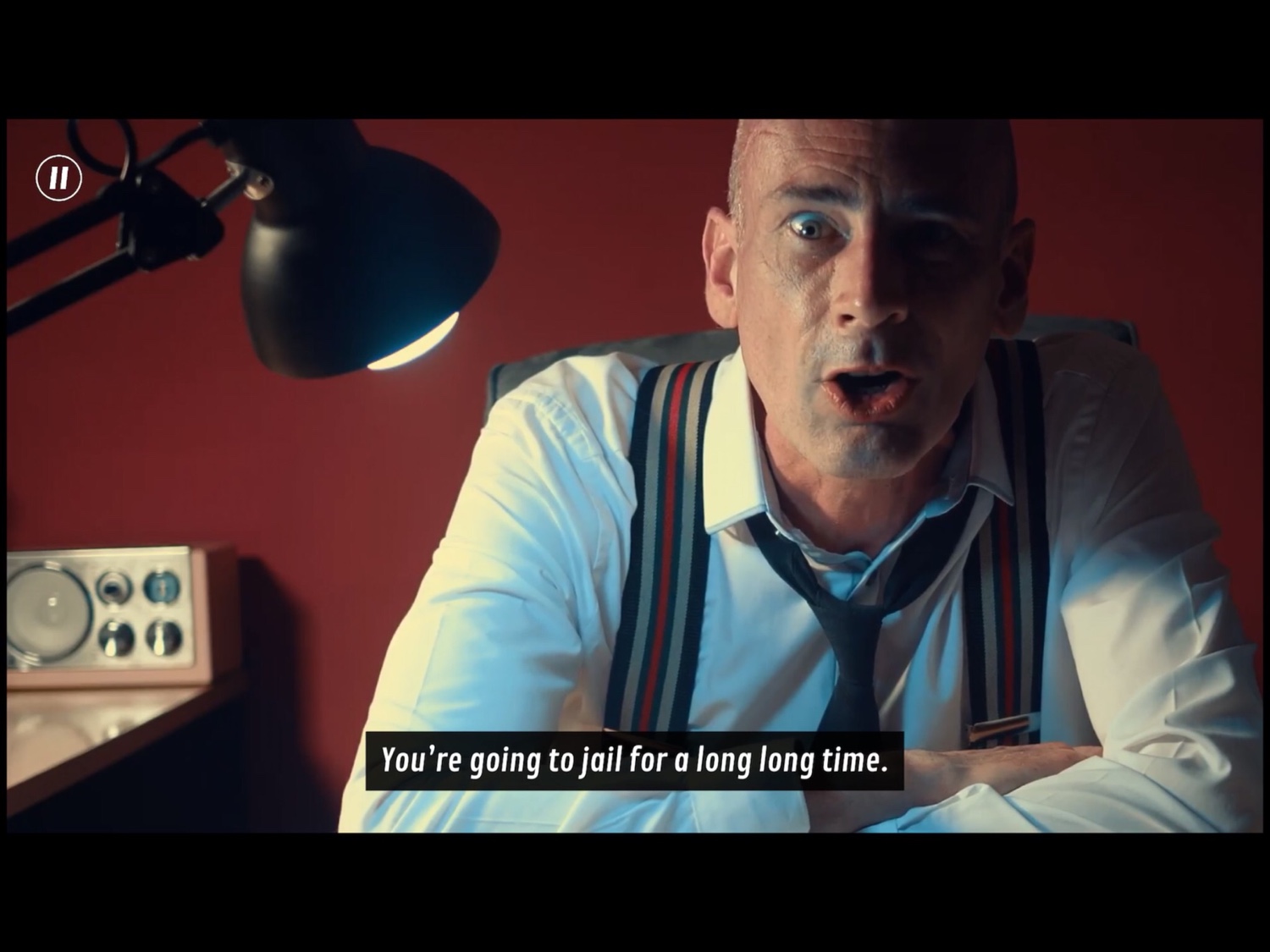 I still want to play again and see what gaps I can fill in — the game boasts 1600 video clips! — and try to get all the achievements. I’m not sure I’ll be able to see everything, though, as it does seem easy to miss things if you choose the wrong dialogue options. I’m also not sure everything will ever be completely clear, and I don’t know how I feel about that. My second playthrough unlocked a lot more details for each character, but I still didn’t feel like it helped me solve the murder. And yet — without spoiling things — I realize that might be the whole point. Her Story left me with questions, too, and it was better because of it. The questions I have might never be resolved, or maybe we’ll be lucky enough to get a sequel that will explain everything. Either way, I’m glad I played, rough edges and all. 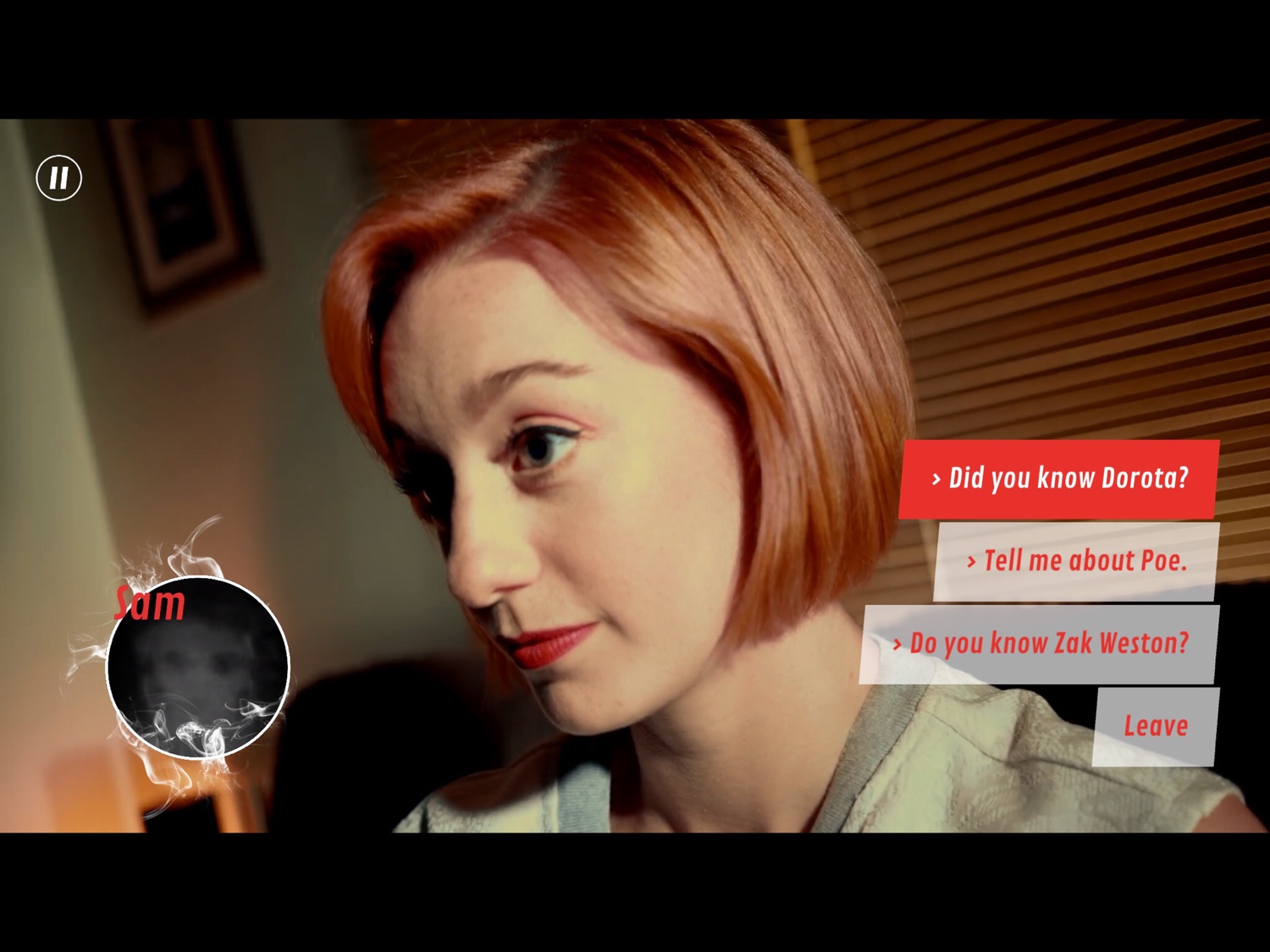 While it is certainly an ambitious game, I don’t think the shapeshifting mechanic was used to it’s full potential, as you often were met with an empty chair if two characters had nothing to say to each other. I know it’s a bit much to expect every interaction to lead somewhere — especially since there are already 1600 video clips — but it’s still just a little disappointing. The game does make up for it with the radio that’s always on in the guesthouse. It plays a constant stream of spooky stories read by some of the developers’ favorite content creators, as well as some playful banter between the fictional radio hosts, Poe and Munro. So if you need a break from all the detective work, you can just relax and listen to some classic short stories. Even if you don’t like the game itself, you get your money’s worth there. I only listened to a few of the stories, but I plan to go back and hear them all.

The Shapeshifting Detective is certainly not your typical murder mystery, and each person’s mileage will vary. It’s a game that’s happy to hold information back and make you work for it. It may take several playthroughs to see everything, and even then you may still have questions. But I enjoyed changing into different characters and tricking them into telling me things. Each bit of information I dragged out of them was like I unlocked a new piece of the puzzle. Thanks to the skip feature, I’m eager to dive back in and learn even more. It may not be perfect, but there’s a lot to like, and it’s certainly one of the better FMV games I’ve played. I’m glad it made its way over to iOS, as touchscreens are the perfect fit for a game like this. I also hope that means we’ll get the developer’s earlier game, The Infectious Madness of Doctor Dekker. If you’re looking for a unique narrative game and don’t mind working a bit to unlock all the pieces, download The Shapeshifting Detective here and find Dorota Shaw’s killer before anyone else dies.