What does the word “photograph” make you think of? For me — and probably most people — it’s happy memories. You take snapshots of your joyful moments to look back at them later, or perhaps use them to see someone’s face when you can’t be with them in person. In the Facebook, Instagram and selfie age, photos are used to make one’s life seem perfect, better than anyone else’s. We take pictures of all the food we’re eating, the places we’re visiting, and people we’re doing it with. It’s unlikely that you’ll see someone post a photo of their burnt apple pie (though I might!) or the spat they had with their spouse. It’s the happy memories we want to capture for eternity, not the sad ones. So when I heard of Luca Redwood’s new game, titled Photographs, I just assumed it would be a cheerful one about important milestones in people’s lives. But the world isn’t all sunshine and rainbows, and I soon discovered that neither is this game. By the end of the first of five stories, I felt like I’d been punched in the gut, and those blows just kept coming. This is a brutal game about harsh realities, and that makes it so much more compelling than anything I could have expected.

Photographs starts off with a story about an alchemist who moves his business — and family — out to the country to get away from all the hustle and bustle of the city. The elderly man narrates the story in his own words, and it’s fully voice acted for extra potency. To unlock each chunk of the story, you need to solve a puzzle. Once you do, the alchemist’s home and business will grow and morph. You then play a sort of hidden object game, where you need to zoom in on a specific item on the screen to snap a photo of it and unlock the next puzzle. For example, you need to focus on the telescope when looking for “a view to the stars.” While many story-driven games have puzzles simply as filler or to provide “gameplay,” here it’s woven into the narrative. For instance, the alchemist and his granddaughter go searching for medicinal herbs in the forest, so their puzzles involve swiping to move both of them around a grid-based forest to their respective goals. At first, things are fairly easy — just like their lives. But when tragedy strikes, they start encountering more obstacles, such as fences and fast-growing vines that get in their way. Their hardships become your hardships, as the puzzles increase in difficulty. While the game won’t hurt your head as much as Baba is You does, being stuck on a puzzle for a bit helps you relate to the alchemist’s own frustration. I won’t tell you what happens to them, but I will say that all five stories in the game involve difficult choices that the characters have to make. So brace yourself. 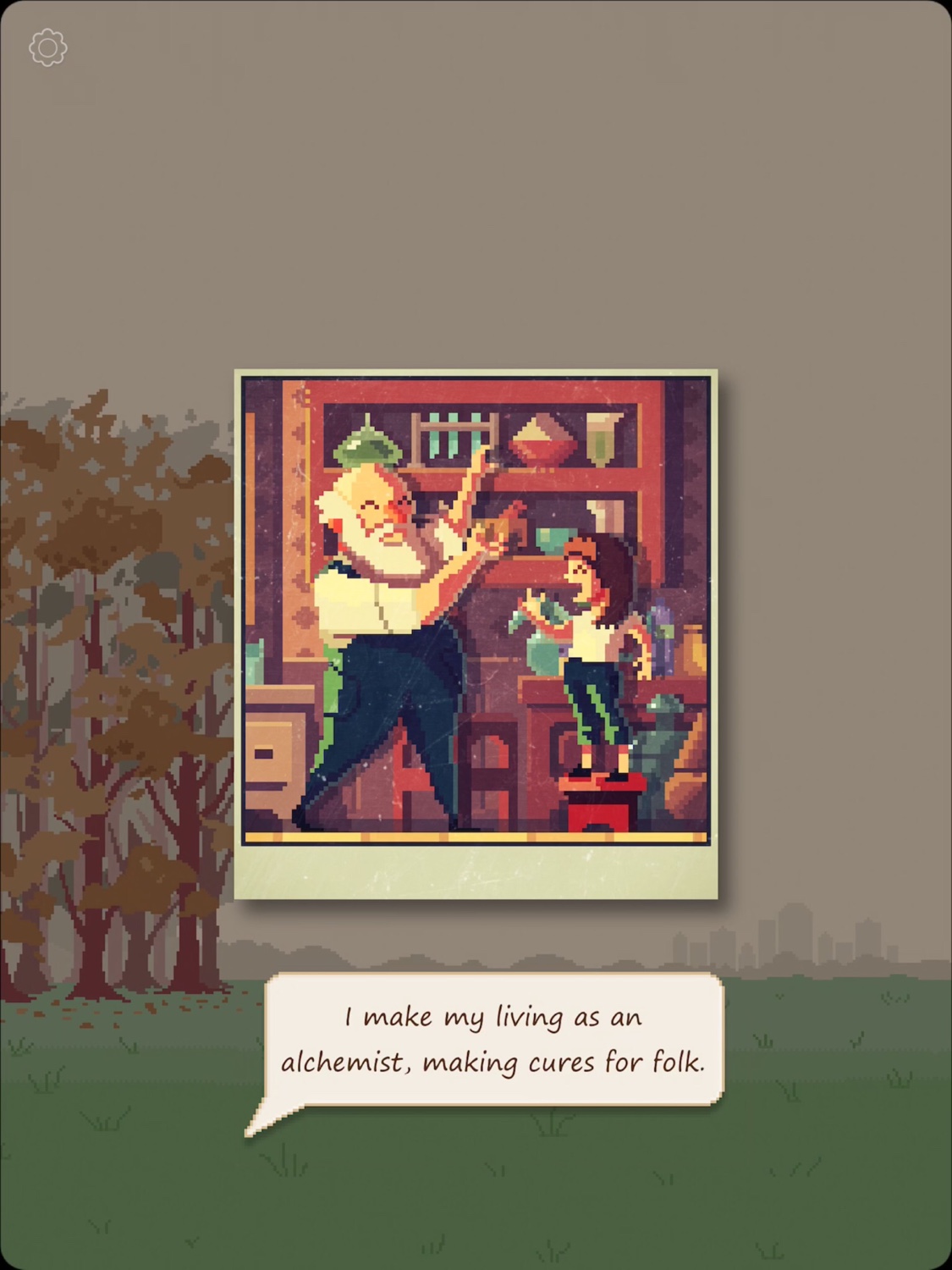 Of the five stories, I relate the most to that of the Journalist, as I know firsthand what it’s like to have to constantly weigh profit against my personal moral code. I try to push quality paid games free of manipulative in-app purchases, but the abusive free-to-play games attract larger numbers of players — and by extension, readers. It was also perhaps the most relevant of the stories, considering the climate in 2019 surrounding the media and how responsible they are for our current political situation. But I think the Jailer’s story did the best job of weaving the puzzles into the narrative. Even though they were probably the easiest of the bunch, consisting mainly of tangrams, they blended so seamlessly with the unfolding events and helped push it along. The way all these elements were used together kept me hanging on every word and every animation. I found that to be the most heartbreaking story, too, as it was a reminder of how awful humanity can be. In case I haven’t made it clear by now, this game isn’t going to give you a warm hug and say, “everything will be alright.” If you watch my gameplay videos, it’s like the Alex Norris “oh no” comics in video game form. 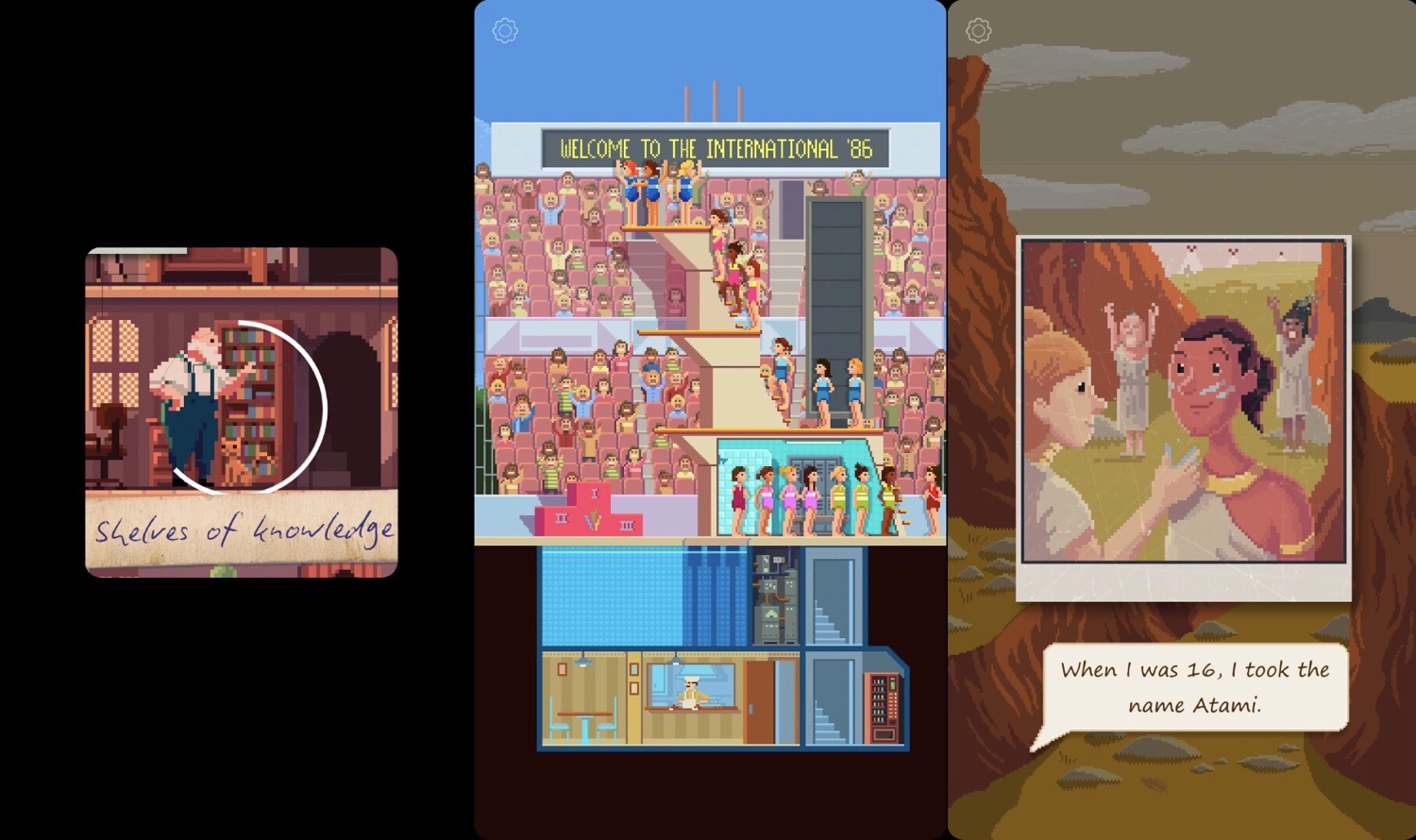 You don’t really have any power over the choices the characters make. You mostly stand by and watch the events play out, as they all ignore you yelling at them not to do what they’re about to do. But at the end, you do get to make one important decision that affects the ending you see and the final puzzles you get to play. While I admit that I’m a bit bummed I can’t see all the endings or solve the rest of the puzzles without replaying the game several times, it adds weight to your decision. It also feels very much in tune with the rest of the game, since it’s all about making difficult choices. Compared to what these five people went through, perhaps missing out on a few puzzles isn’t the end of the world. 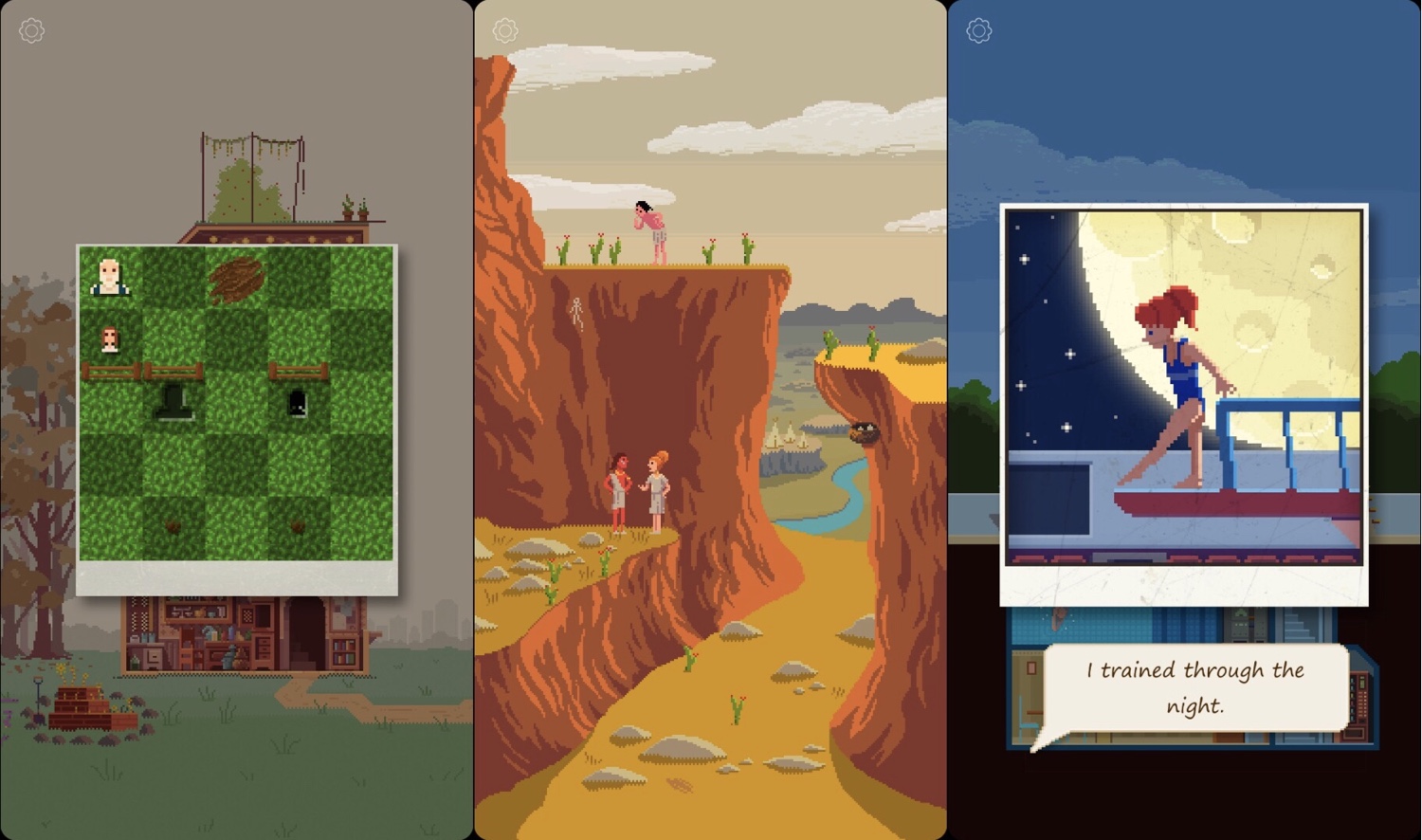 To accompany the strong writing and puzzle design, the game includes top-notch voice acting and an original soundtrack from Ben Prunty. Each story has its own music that fits the environment and pulls everything together. And while pixel art isn’t usually my first choice when it comes to graphics styles, thankfully Luca outsourced it to artist Octavi Navarro, who has worked on retro-style games like Thimbleweed Park. Navarro does an excellent job capturing all the emotions without relying on hyper-detailed retina graphics. 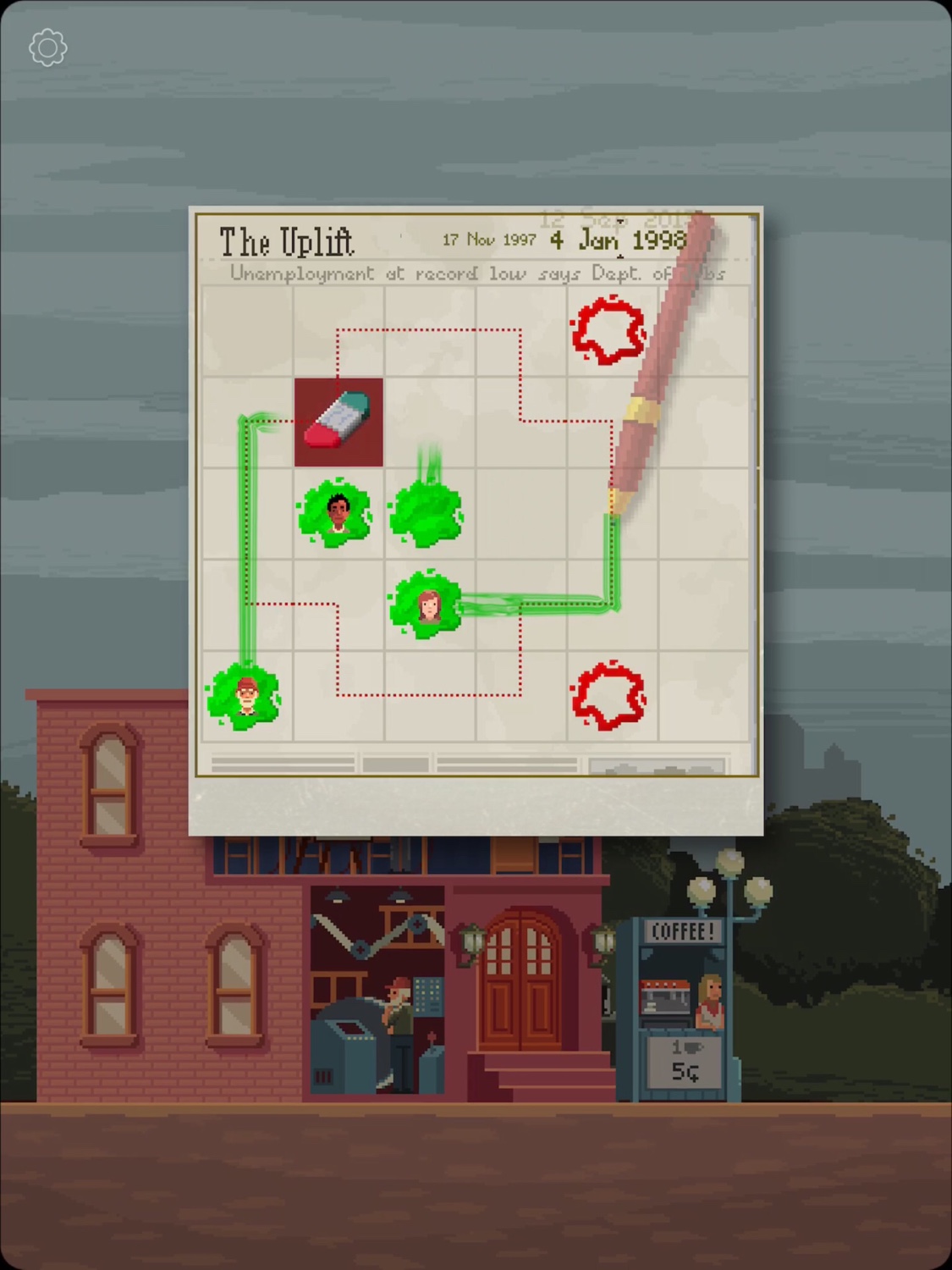 Despite the game being released on multiple platforms at once, including PC, it feels right at home on mobile. It’s a one-handed game that plays in portrait mode, and just about all the interactions are gestures you’re already used to. You flick a photo up when you want to get rid of it, and tap and hold to zoom in and take a photo. For the the most part, the puzzle controls also feel natural, like swiping to move or dragging puzzle pieces to the board. But a couple of chapters had somewhat awkward controls. For the Athlete, I kept wanting to interact with each part of the puzzle directly, but instead had to do so through wheels lined up at the bottom. And for the Journalist, instead of just using your finger to draw lines on the paper, you have to select a pen below and use it like a joystick. In retrospect, I can see why they might be that way, and they didn’t ruin the game at all. But they were both a bit off-putting until I got used to them. In any case, they’re minor issues with an otherwise polished experience. 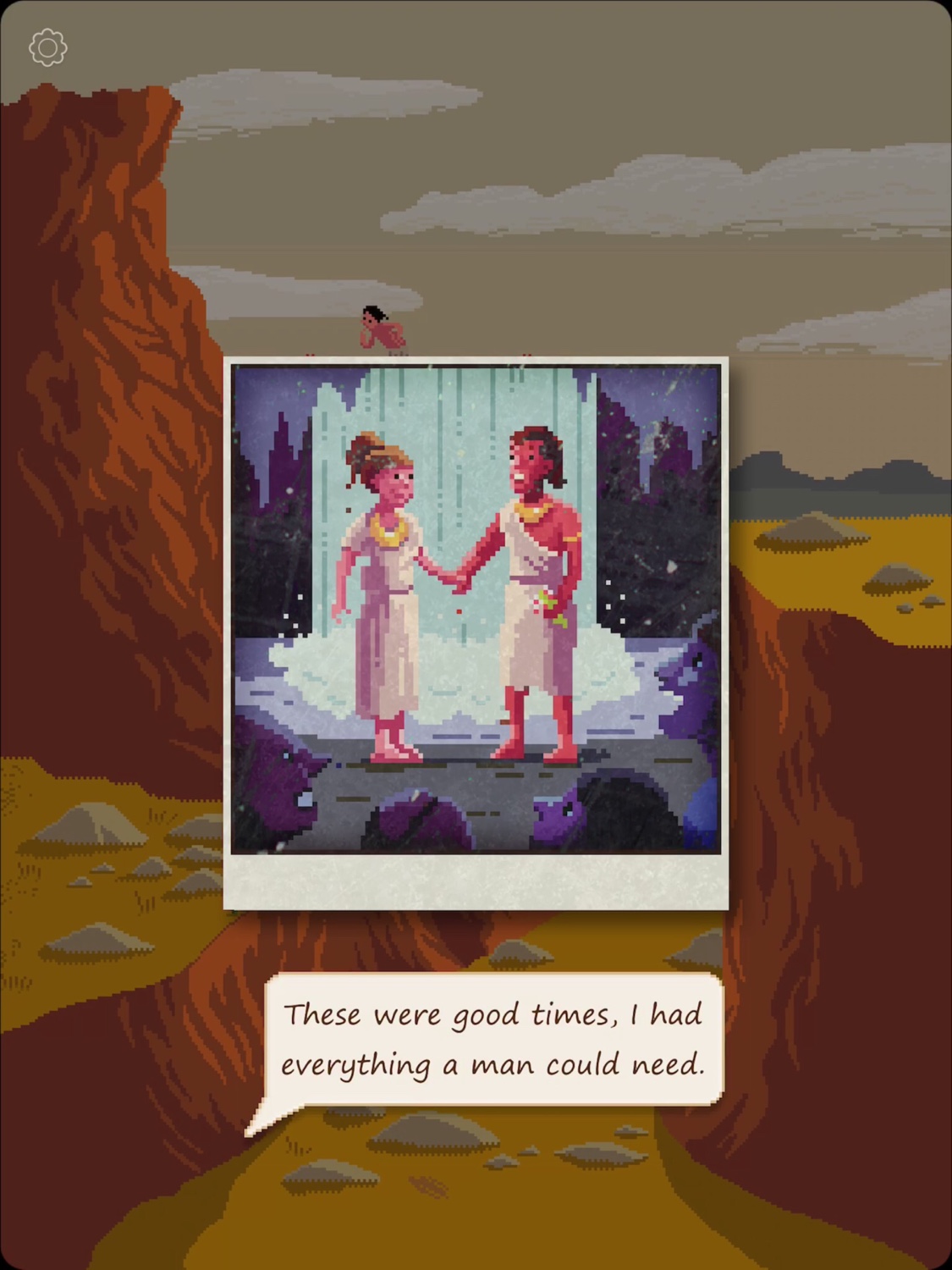 If you’re looking for a game to make you feel all warm and fuzzy inside, this isn’t it. But if you want one that will get you to reflect on life, current events, and humanity as a whole, you’ve come to the right place. Photographs doesn’t sugar-coat anything. Even the characters’ regrets are sometimes shocking and hard to agree with. But perhaps it will make you think over some of the decisions you’ve made in your life and reconsider whether you chose well before it’s too late. The game might be brutal and devastating in its honesty, but that’s what makes it stand out. When you’re done with it, you can go back to your happy-ending stories and monster-bashing bliss. But I implore you to allow yourself to be vulnerable for a few hours and emotionally abused by Photographs. If you’re not afraid of some gut punches, grab the game here and take a difficult journey with five flawed human beings.