Haiku Games is back with another Adventure Escape game! This is the sequel to Trapmaker and is called Trapmaker 2 – Tracing the Past. In the first game, we discovered that Frank Dietch is the Trapmaker! Will Detective Kate Gray finally catch him after he got away? Let’s find out! This walkthrough guide will help you with answers and solutions for all the puzzles in Chapter 5. Feel free to ask for extra help in the comments section.

You can watch my video for Chapter 5 or continue below for my step-by-step guide.

1. Grab the fan and metal detector. Open the car door and pick up the volume knob. 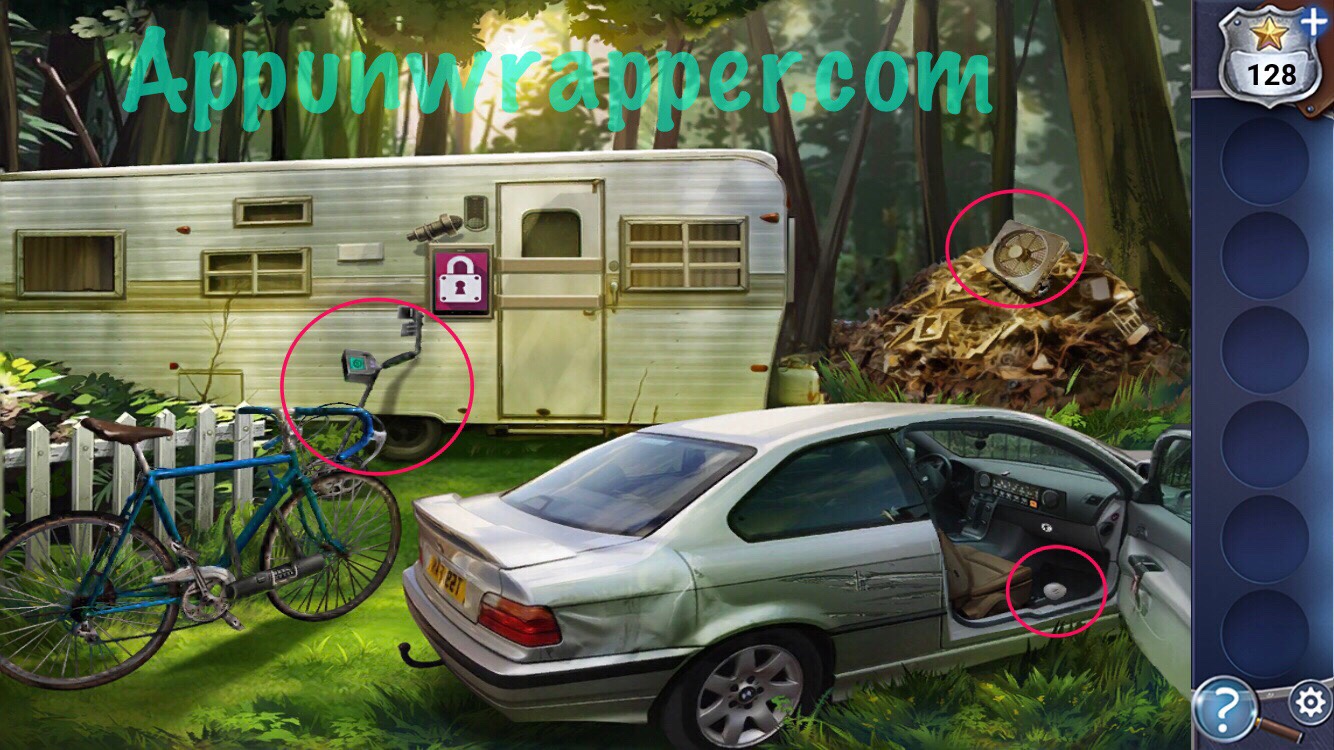 2. Attach the volume knob to the car’s stereo system and use the metal detector to find a key in the grass. Pick it up. 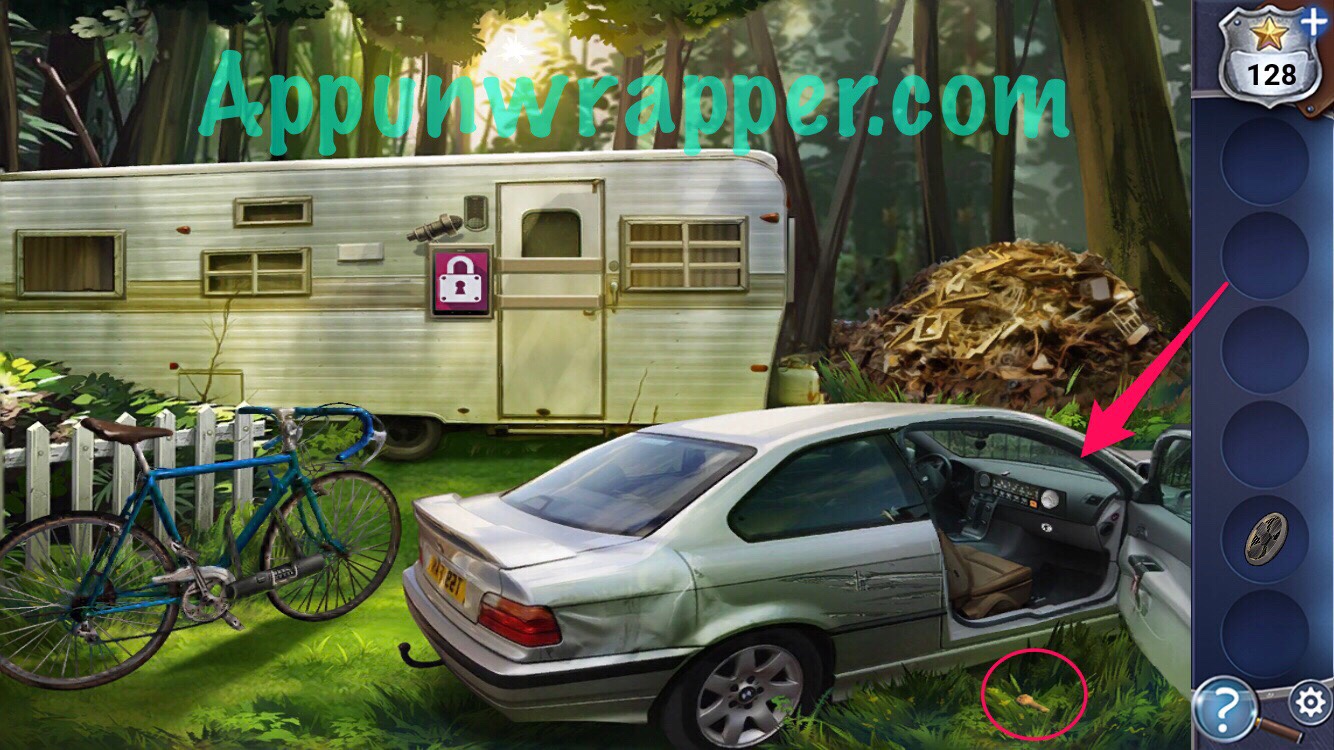 3. Use the key to unlock the glove compartment in the car and take the cassette tape from inside. Then insert it into the cassette player to hear Trapmaker’s voice. He says, “Remember Sam Davis? His first mistake was his last!” It will unlock the trailer’s door! Head inside. 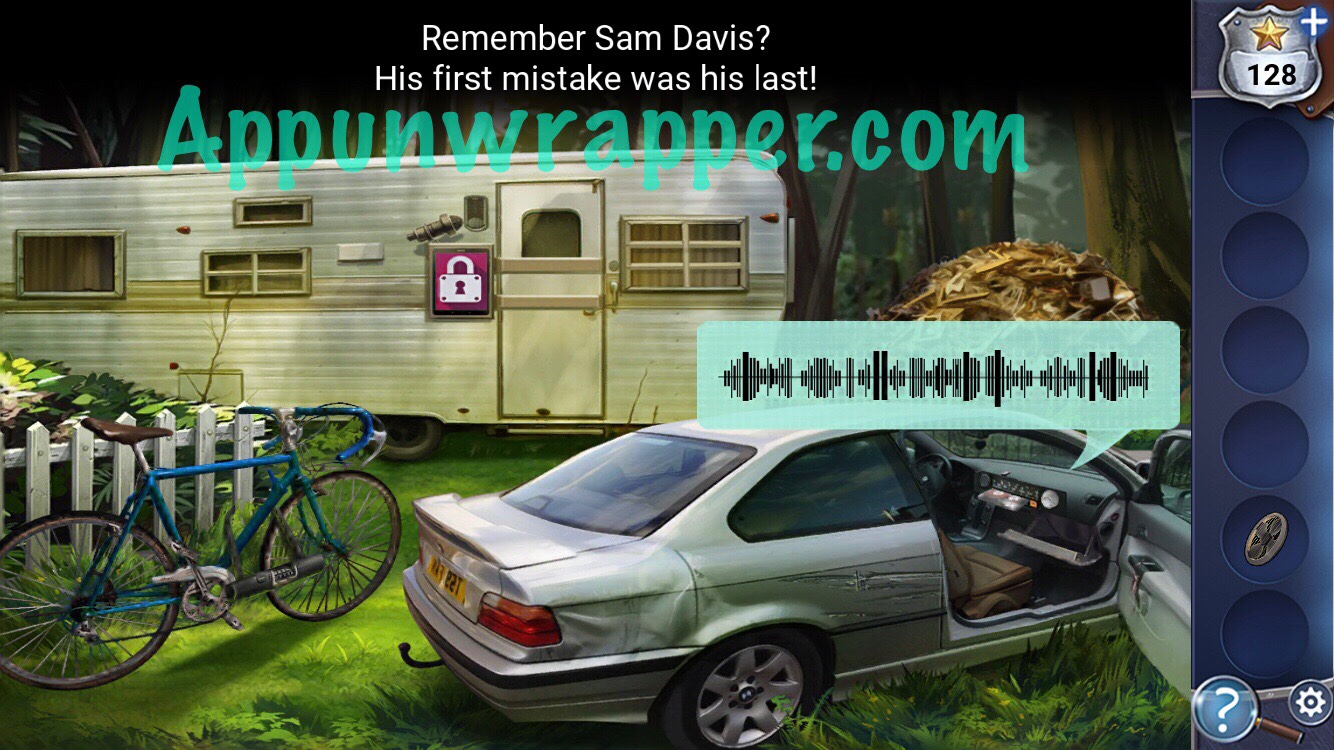 4. The chemical has spilled all over the place! Let’s clean it up. Pick up the coffee pot and hazmat gloves. Also, move the empty gas can. 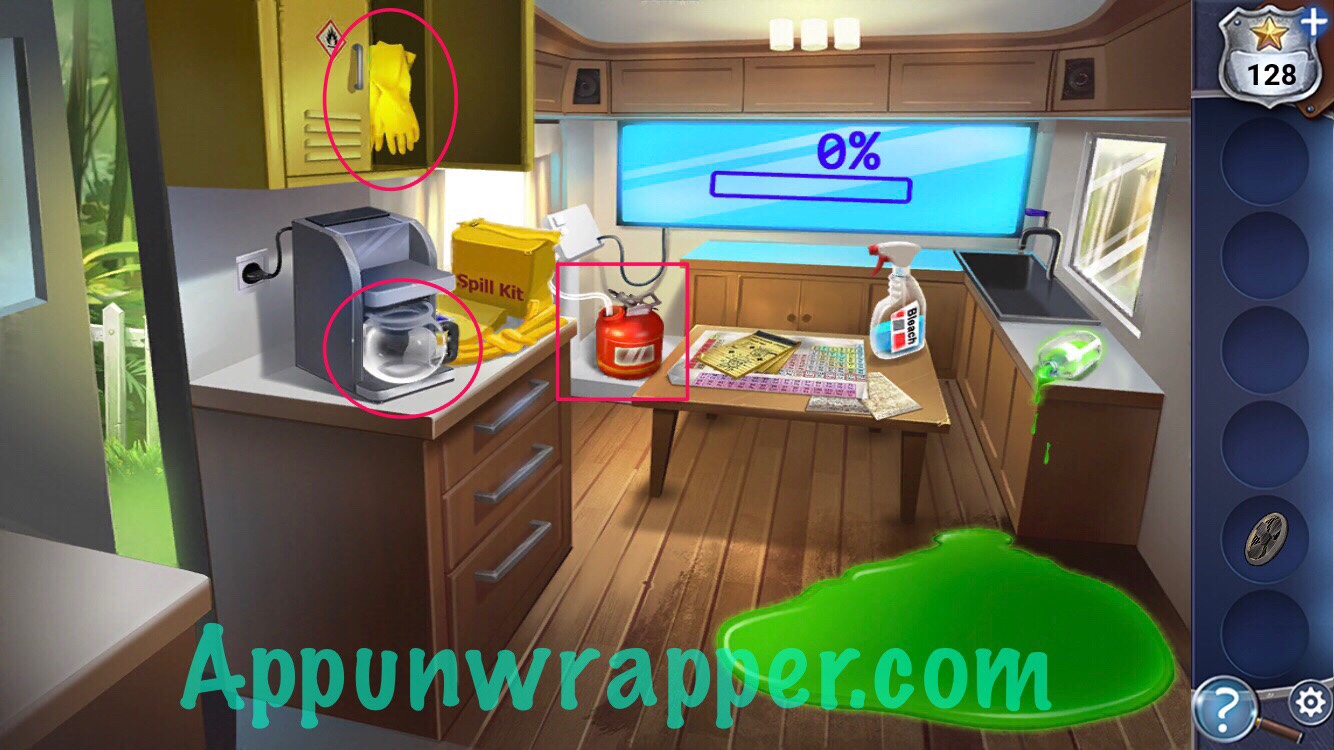 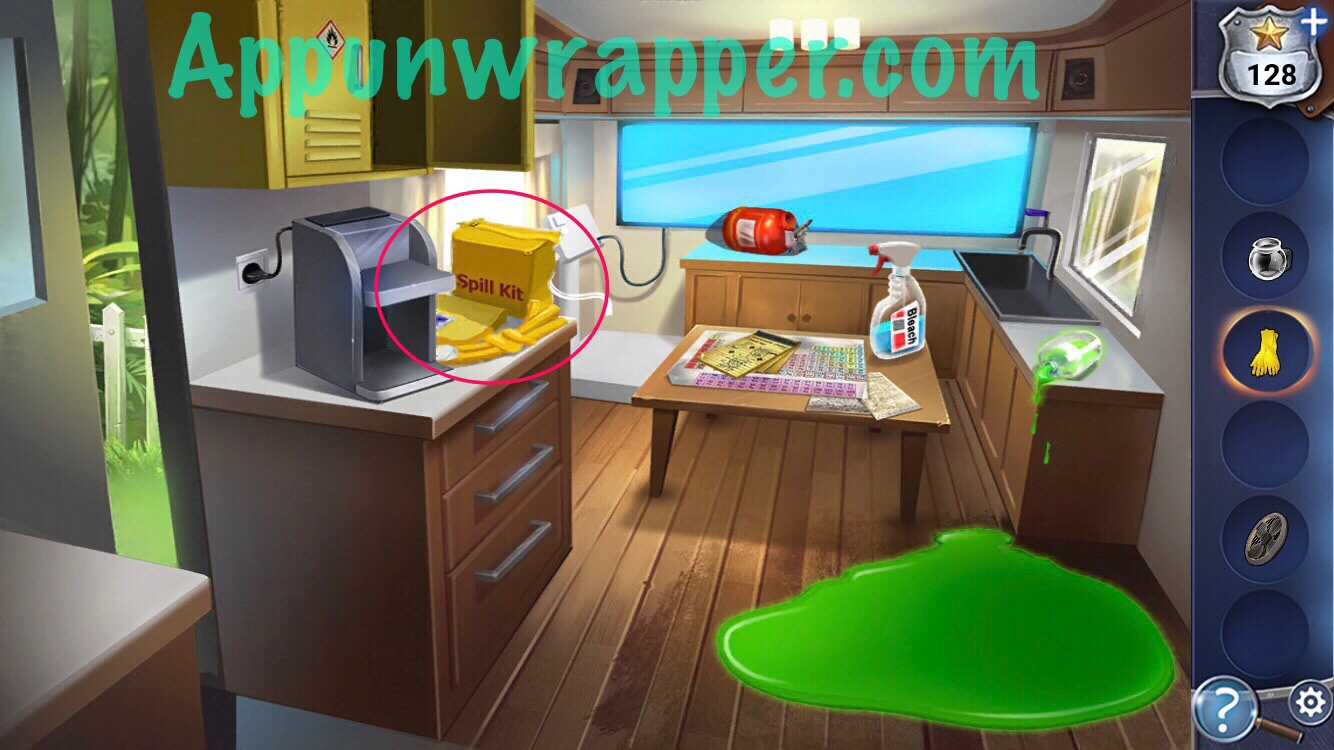 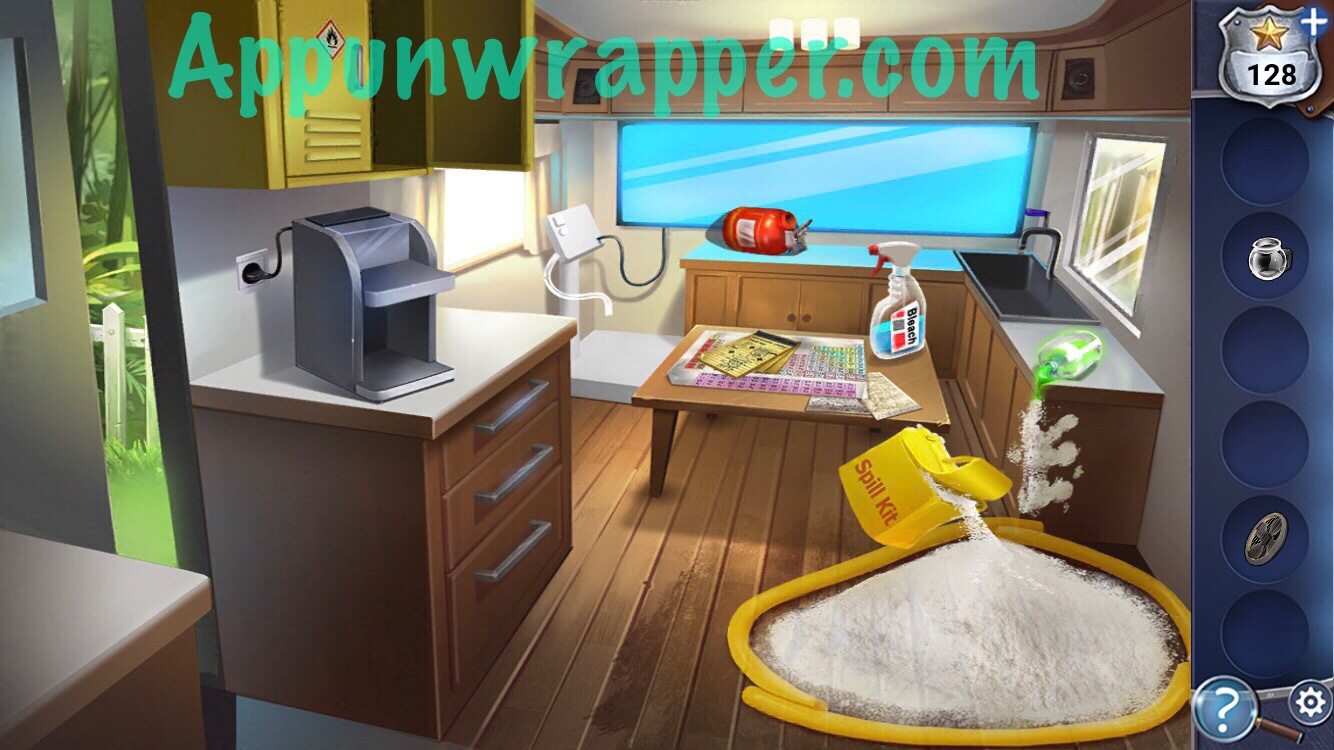 6. Oh no! Murphy messed up again! There’s gas everywhere! Find the gas masks. Then move each filter to a can to cover all the openings. You only have a minute before it resets. 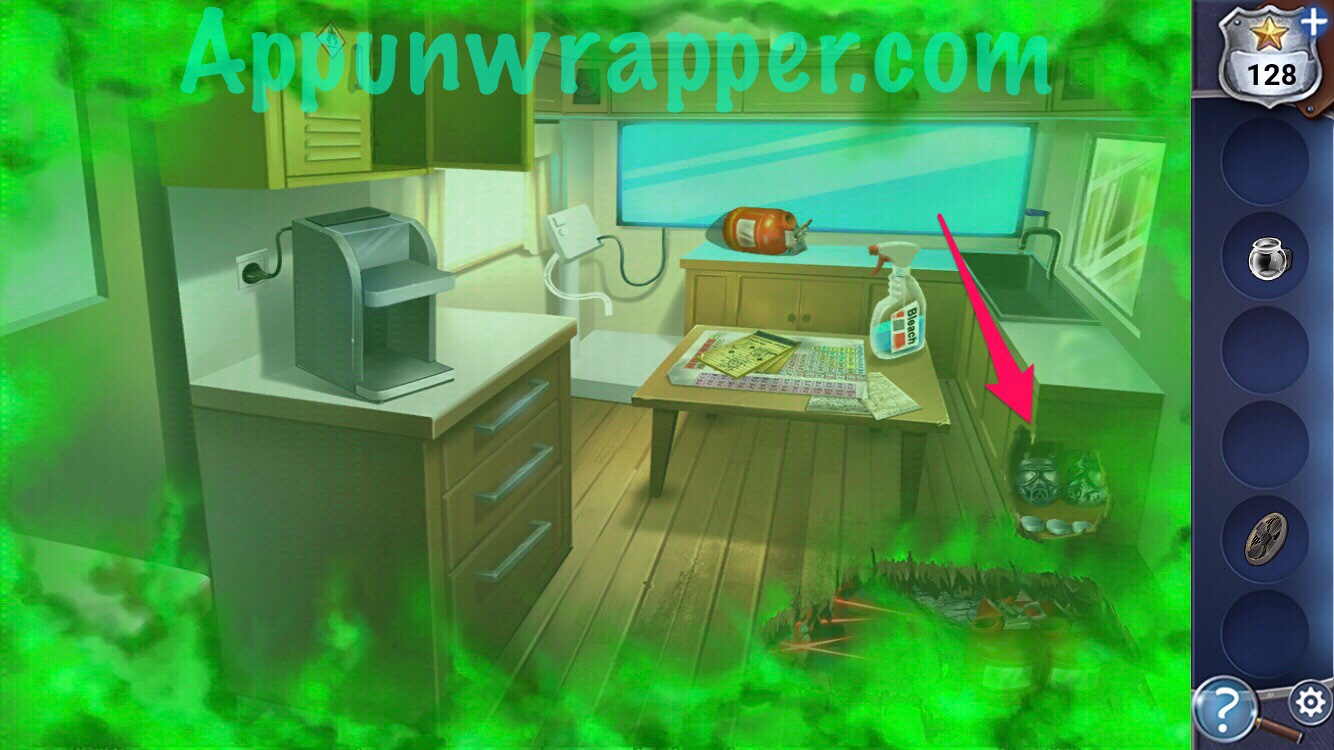 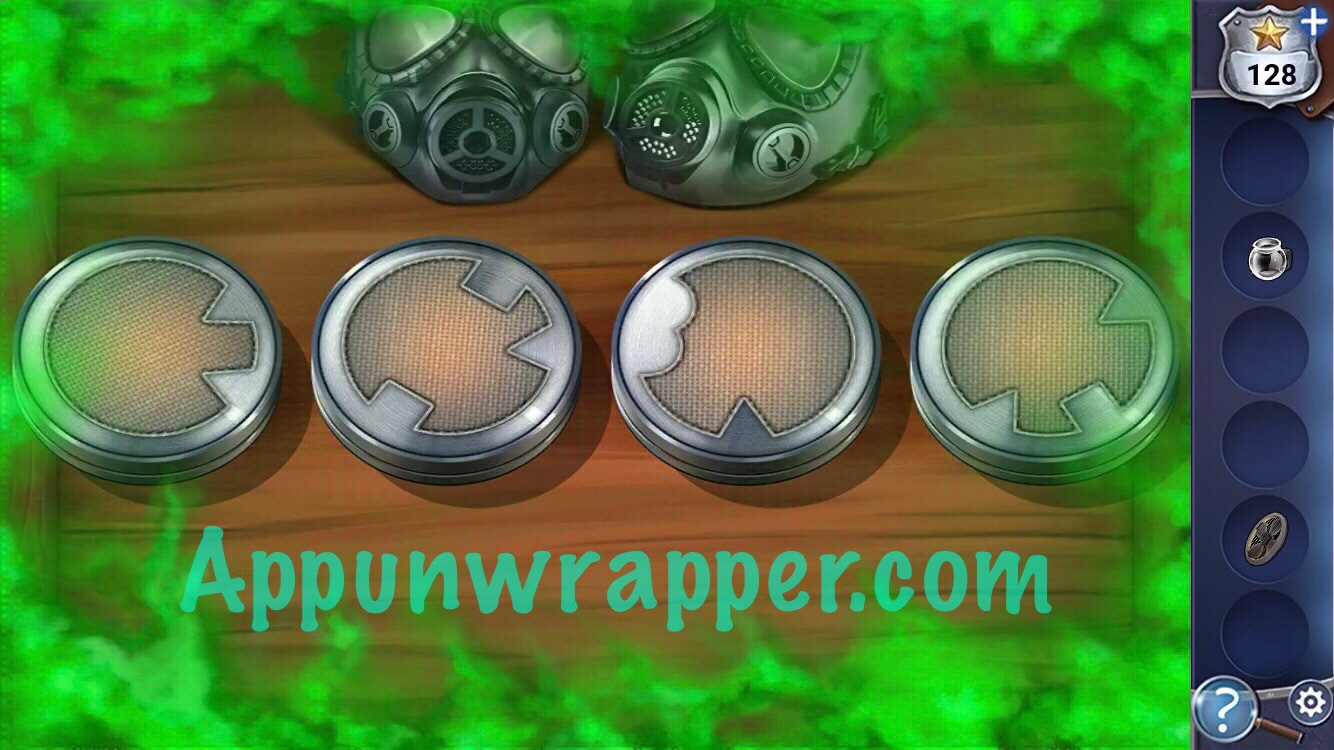 7. We need to remove the toxins from the gas. Pick up the gas canister and look at the instructions and Periodic Table of Elements on the table. The instructions say you need boiling water, bleach and sweat to detoxify the gas. 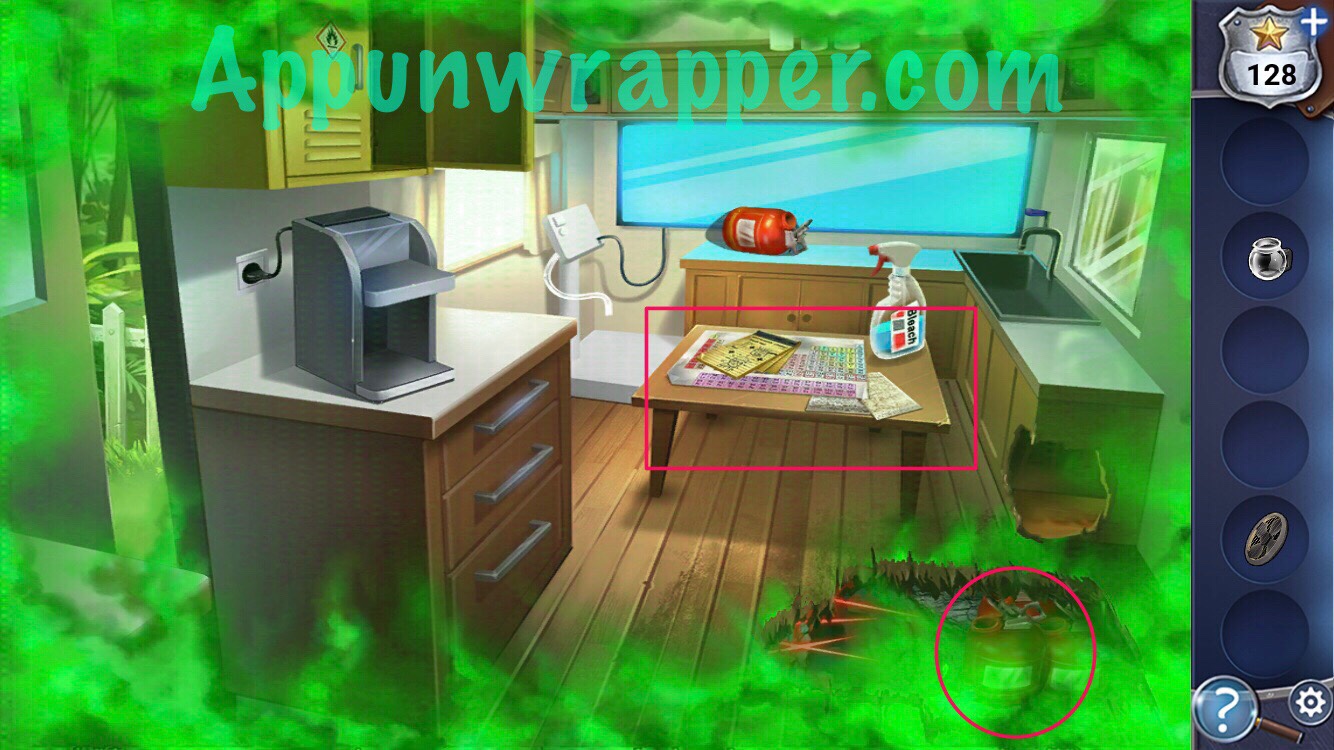 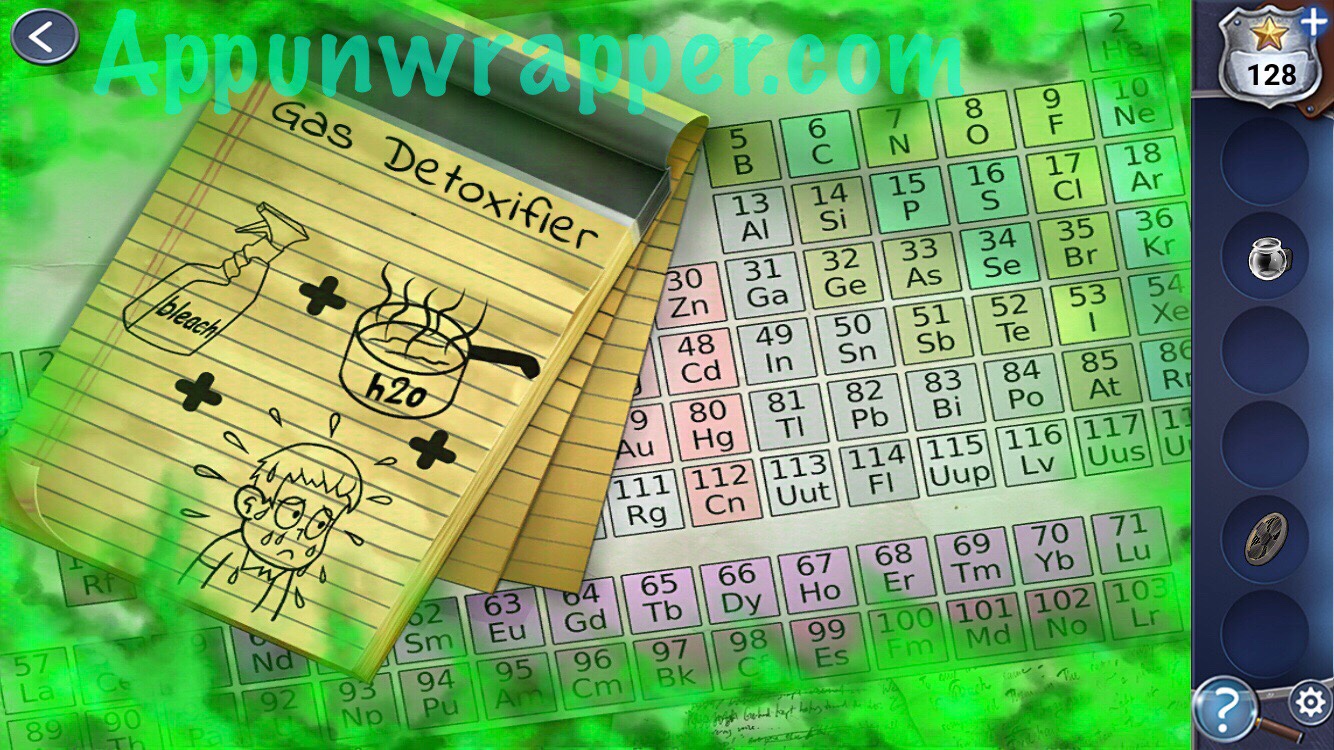 8. Fill the coffee pot with water from the sink. Then use the coffee maker to boil the water. Pick it up again. 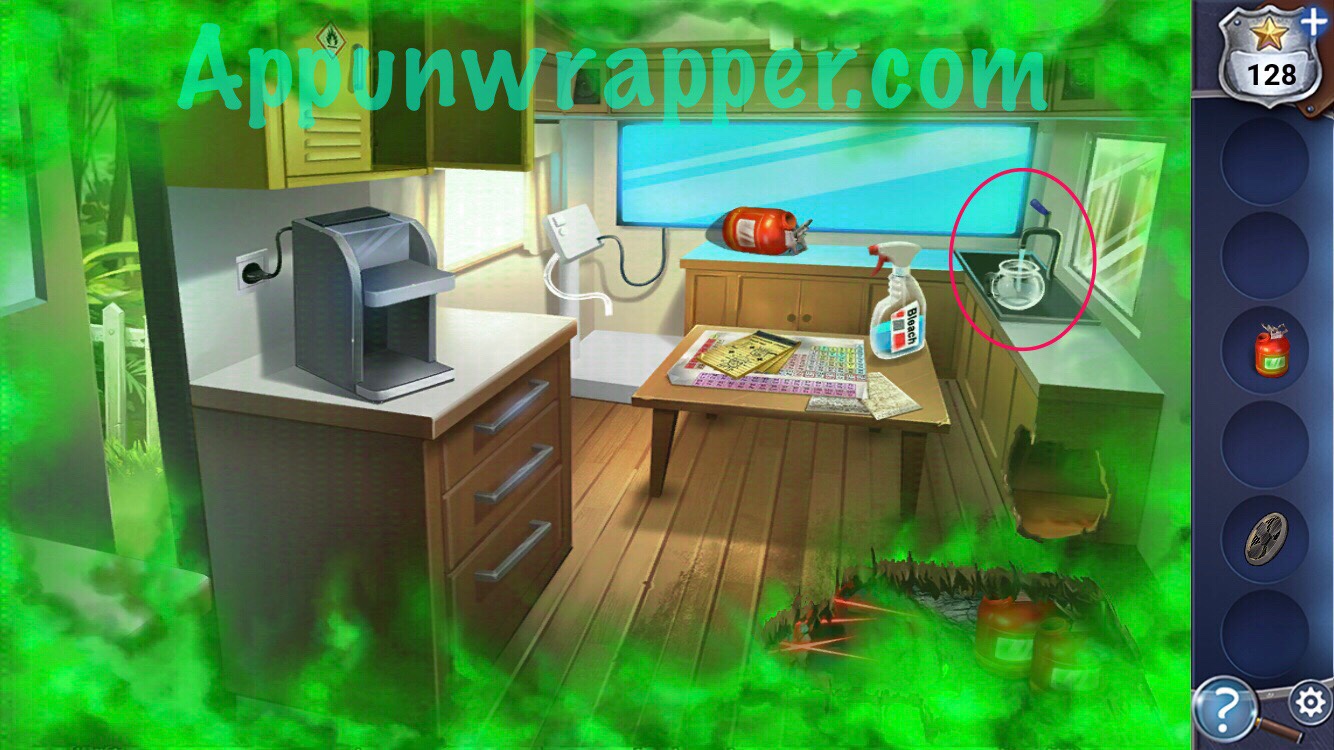 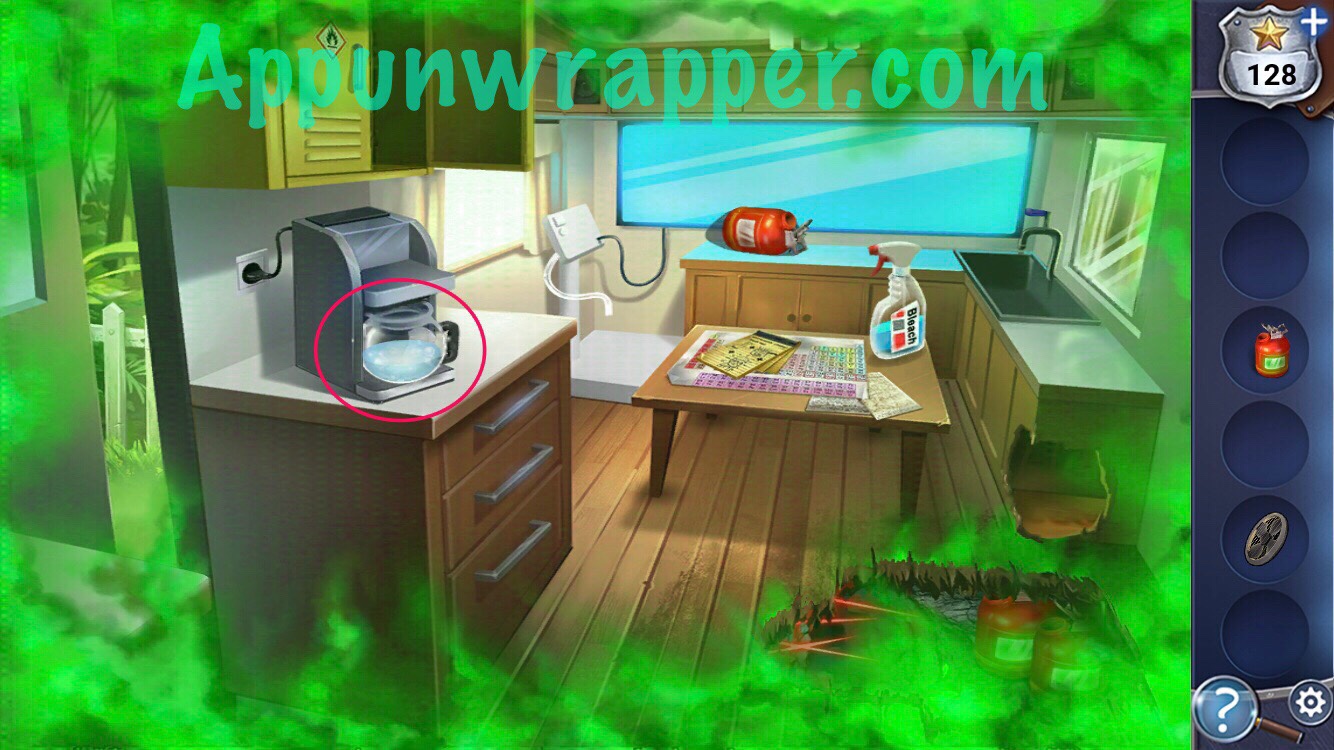 9. Attach the gas canister to the analyzer to see the components of the gas. If you look at the Periodic Table of Elements, you can find those numbers on there and the elements they represent. 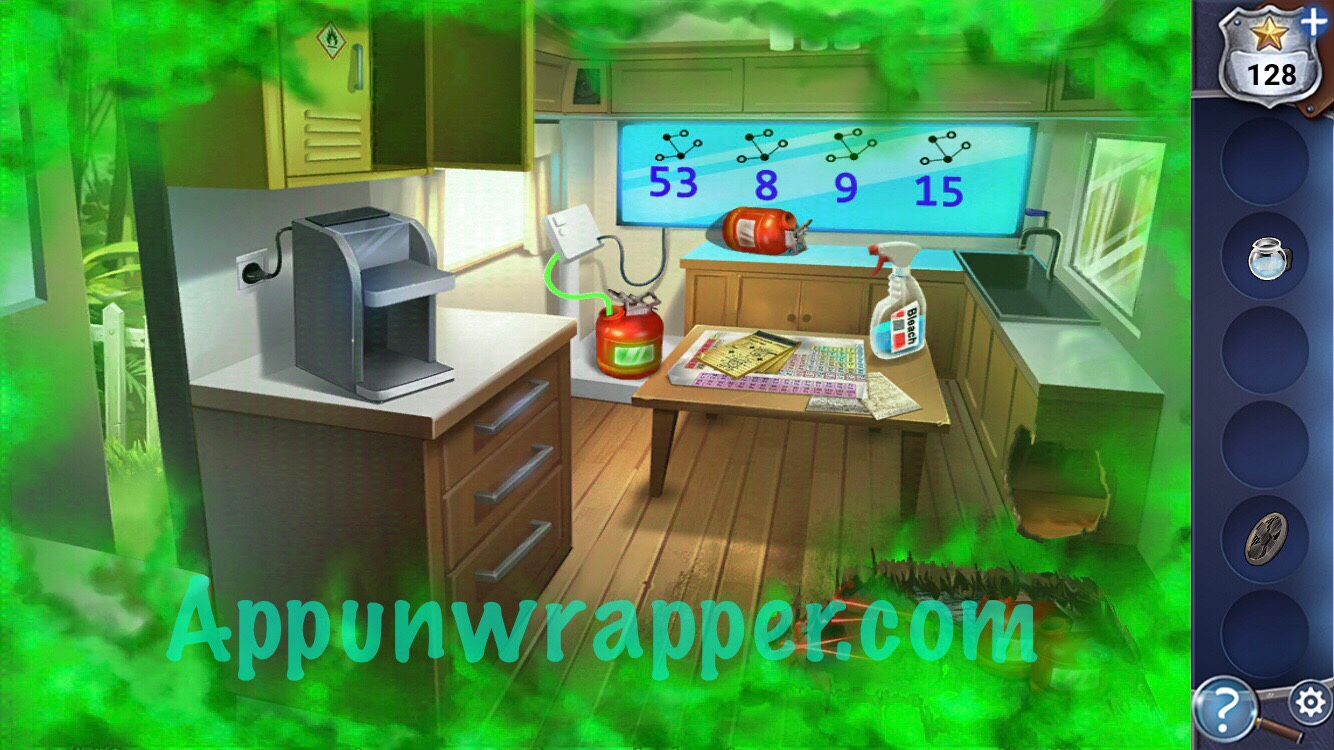 9. Go back outside and tap on the bike. There’s a combination lock! Enter IOFP to unlock it. Then Murphy will ride around on it in order to sweat. Take the sweaty undershirt from him. 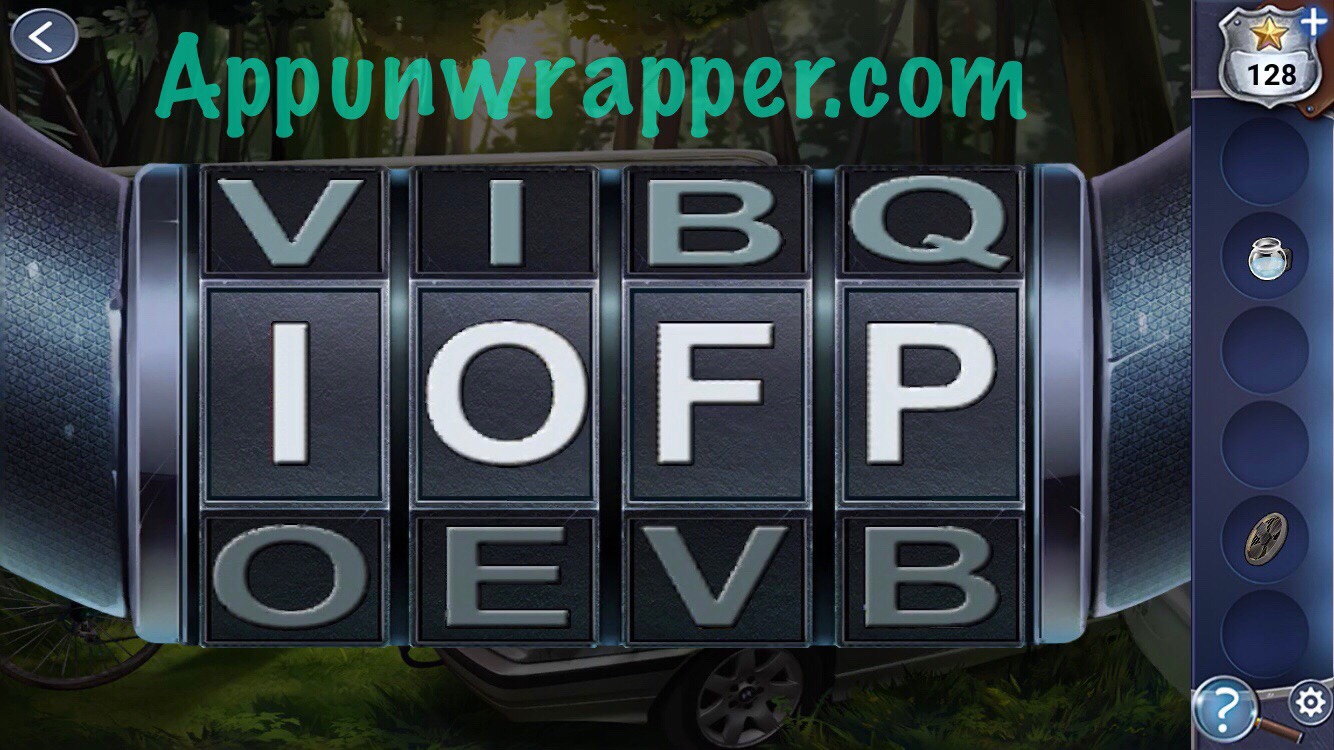 10. Add the water and the sweat to the bottle of bleach to make a detoxifier. Then spray it around the room to detoxify the gas. 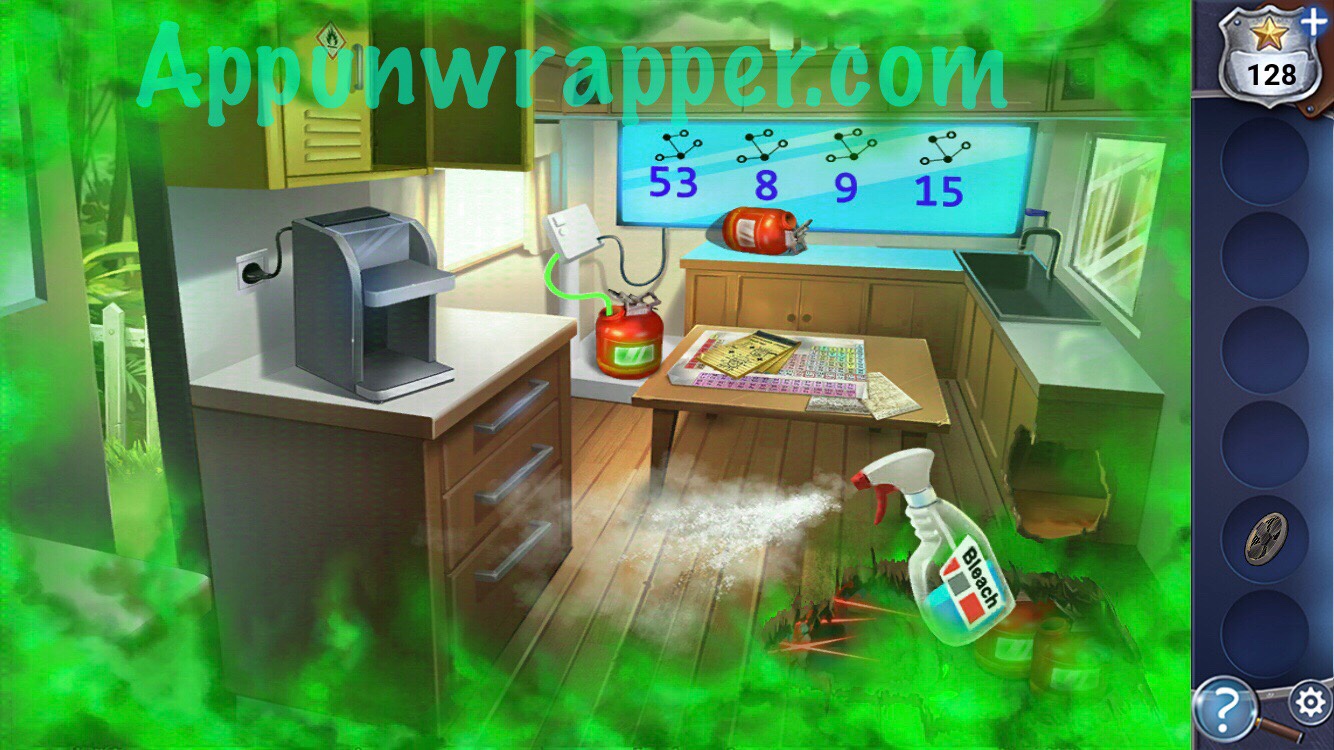 11. Open the window and place the fan in it to pull all the gas outside. Then tap on the lasers in the floor or access another puzzle. 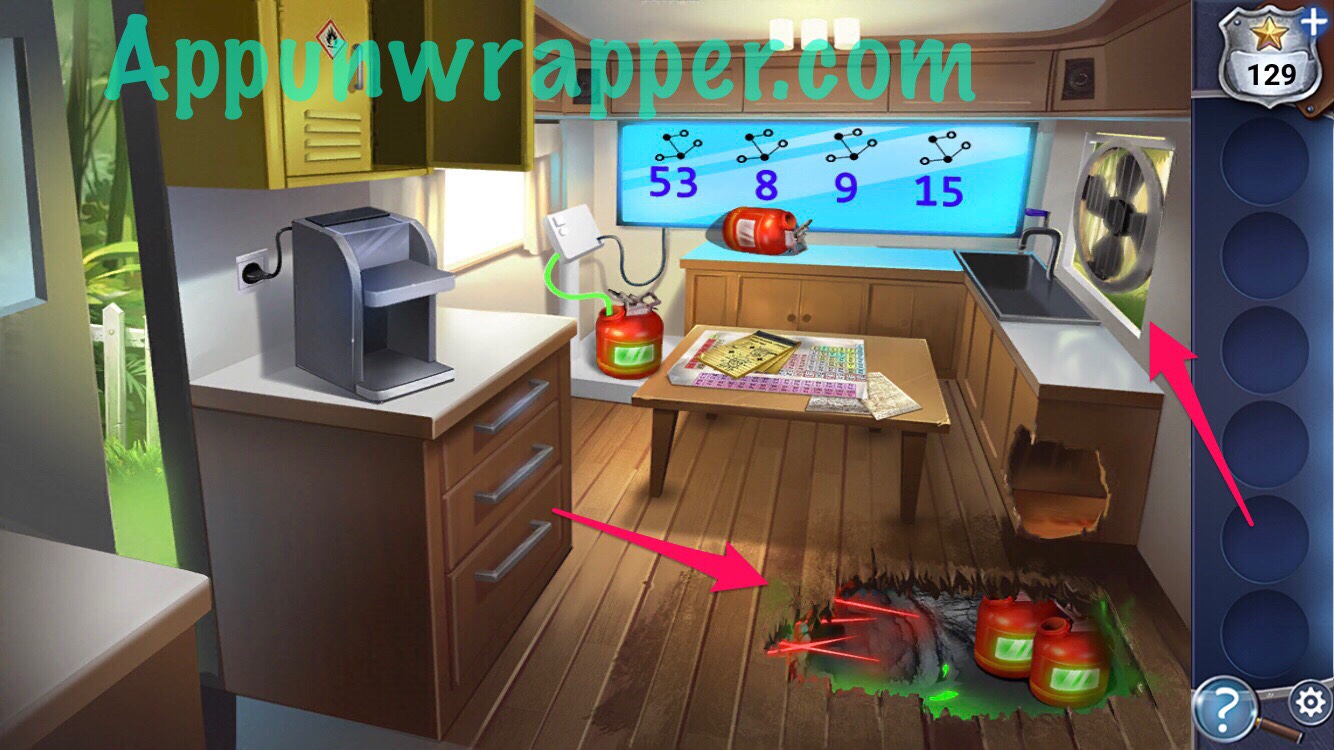 12. It’s a laser reflecting puzzle! Rotate the mirrors so that a laser hits each of the gems. 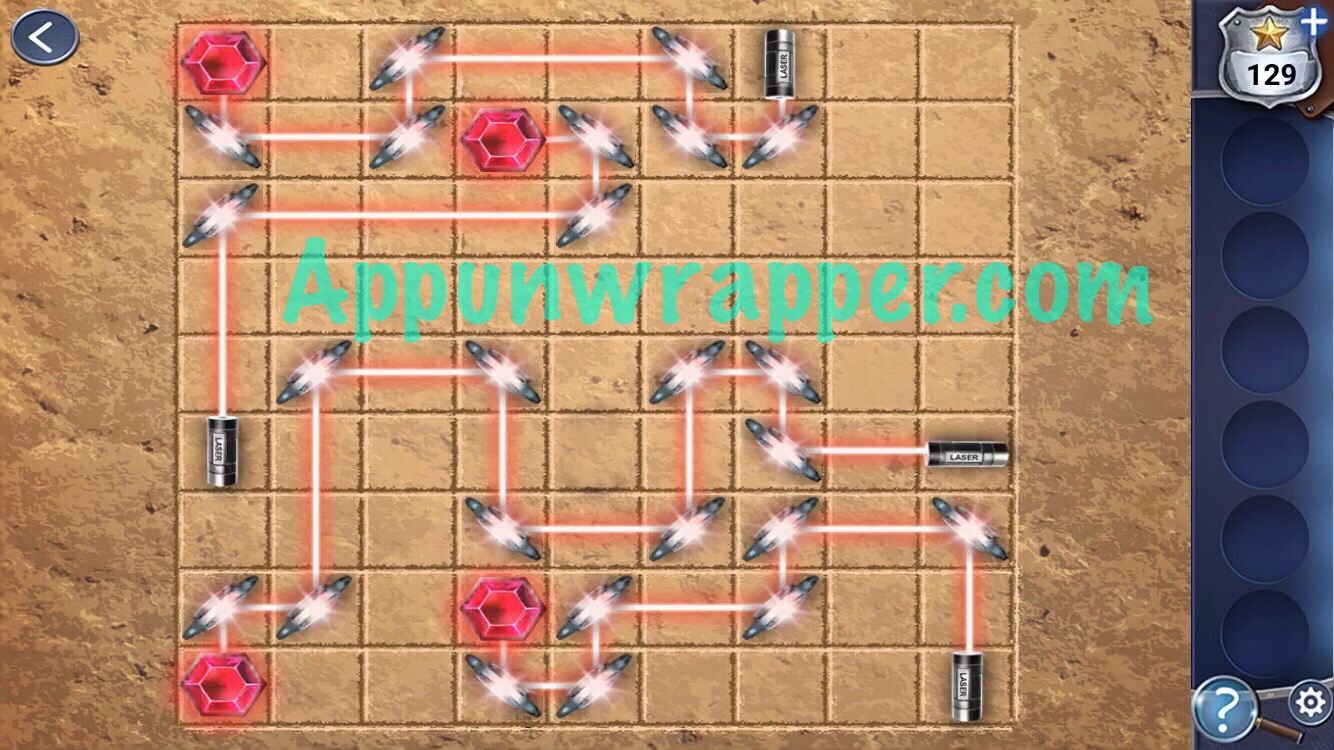 13. Head down to discover a hidden area with a stockpile of Psyrobin. Open the drawer to get a hard drive. 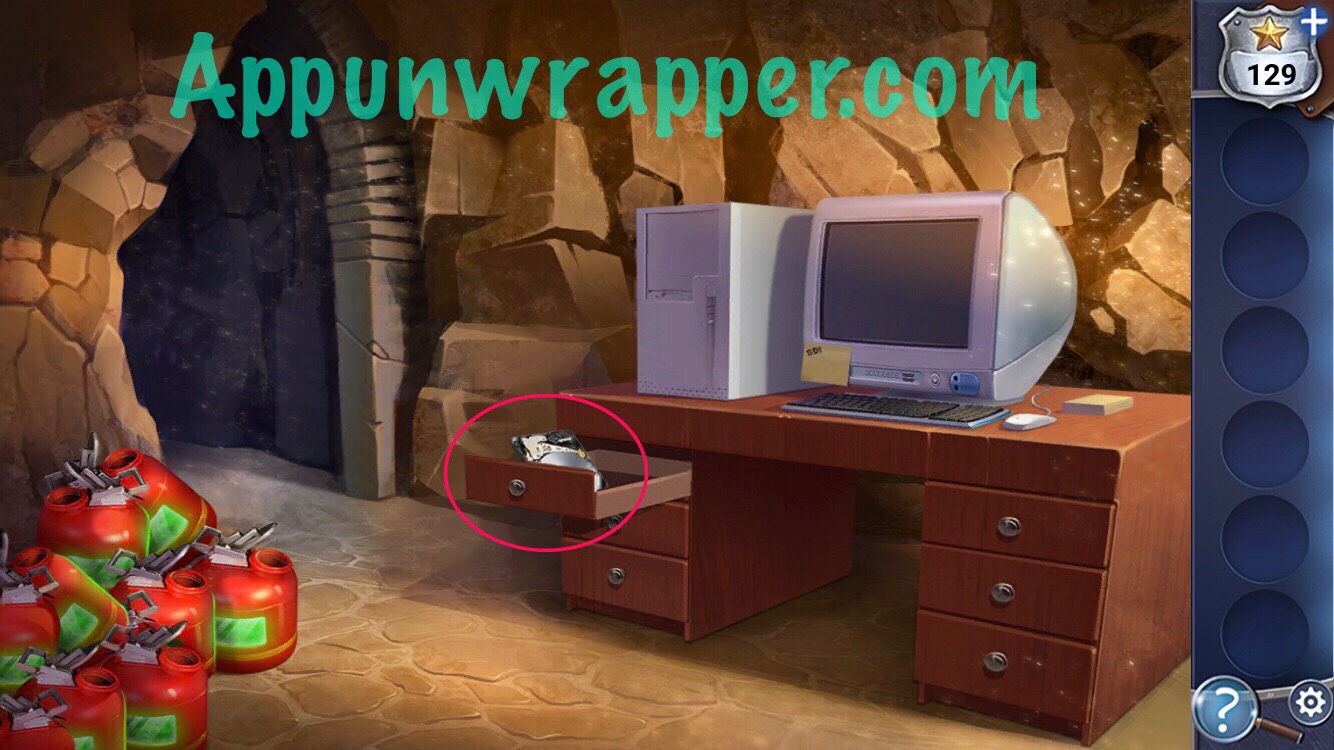 14. Attach the hard drive to the computer. We need a password to get in, but there’s a sticky note with the letters SD on it. Remember the recording from the cassette tape? It said Sam Davis on it. That’s the answer!

15. Now you’re playing as Penny. Pick up the metal polish and cloth. Open the drawers to find some keys. And look at Penny’s ID badge. 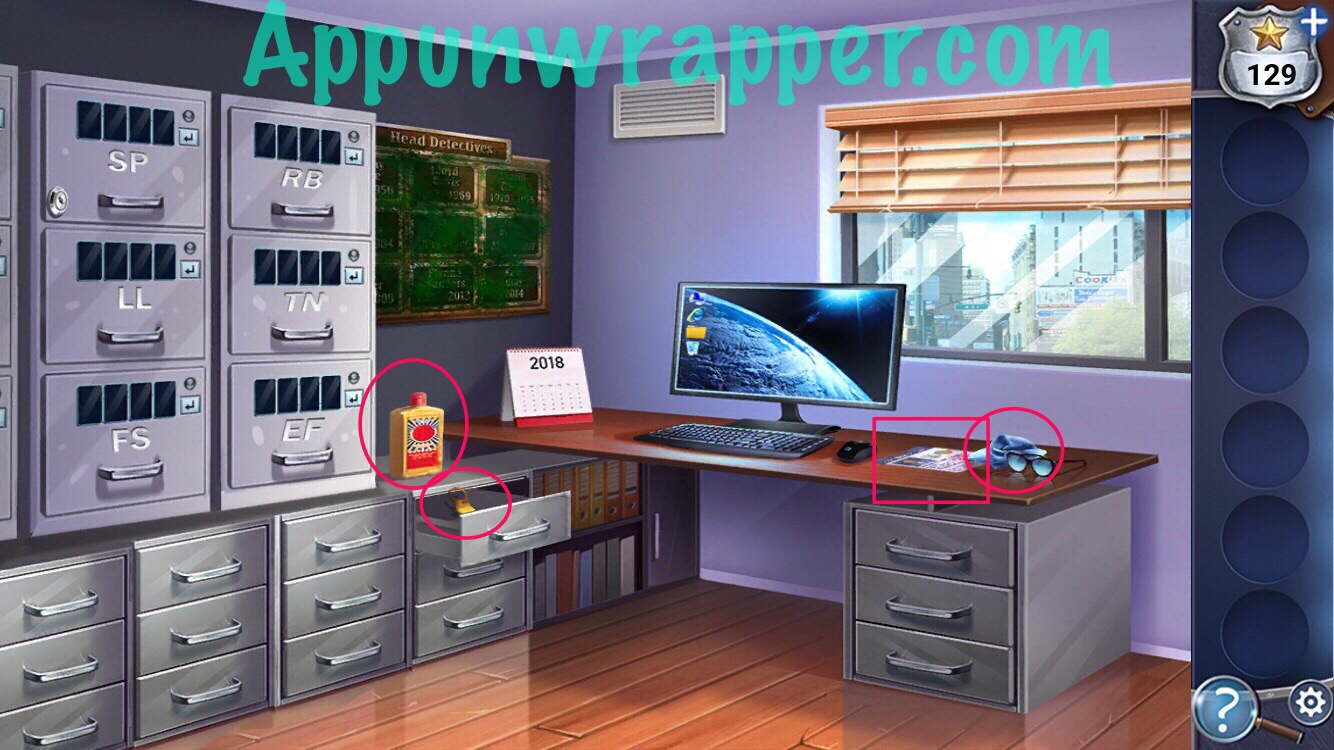 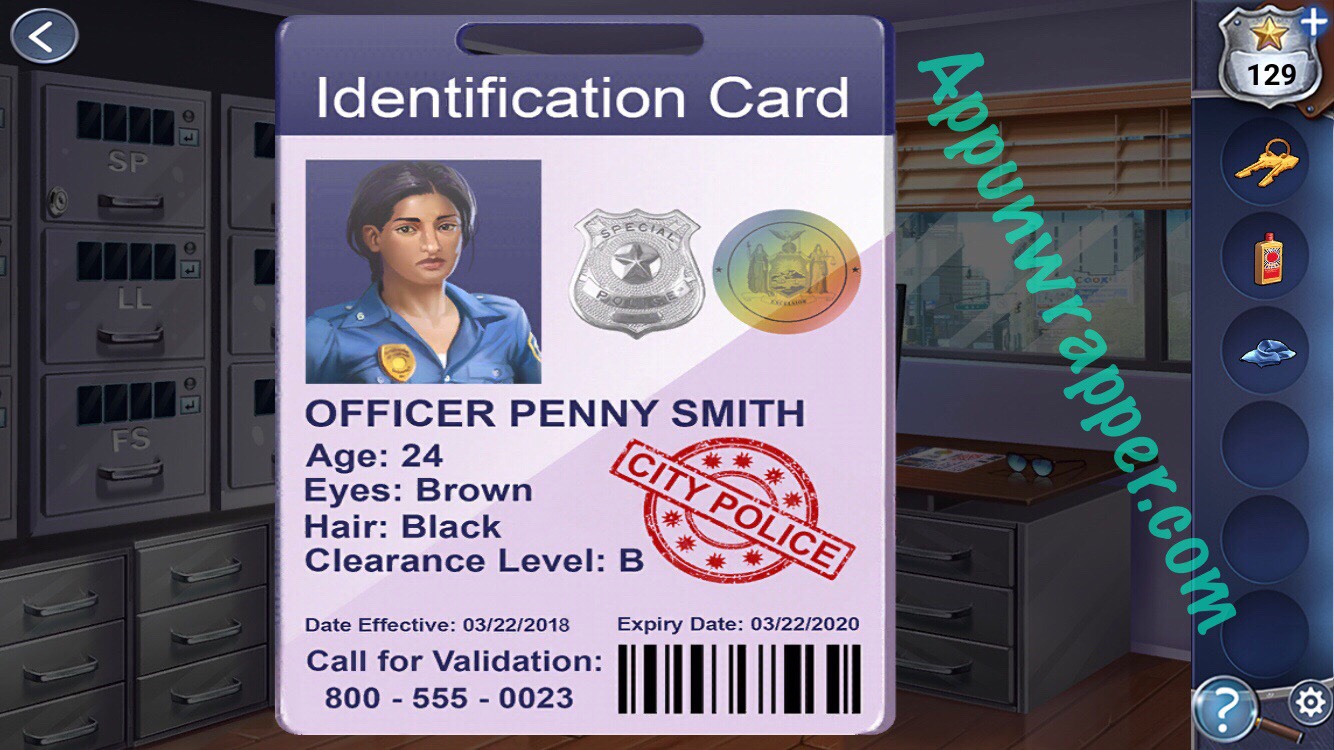 16. Use the metal polish and cloth to clean off the plaques on the wall. Then take a look at them. It lists all the head detectives and the years they worked. 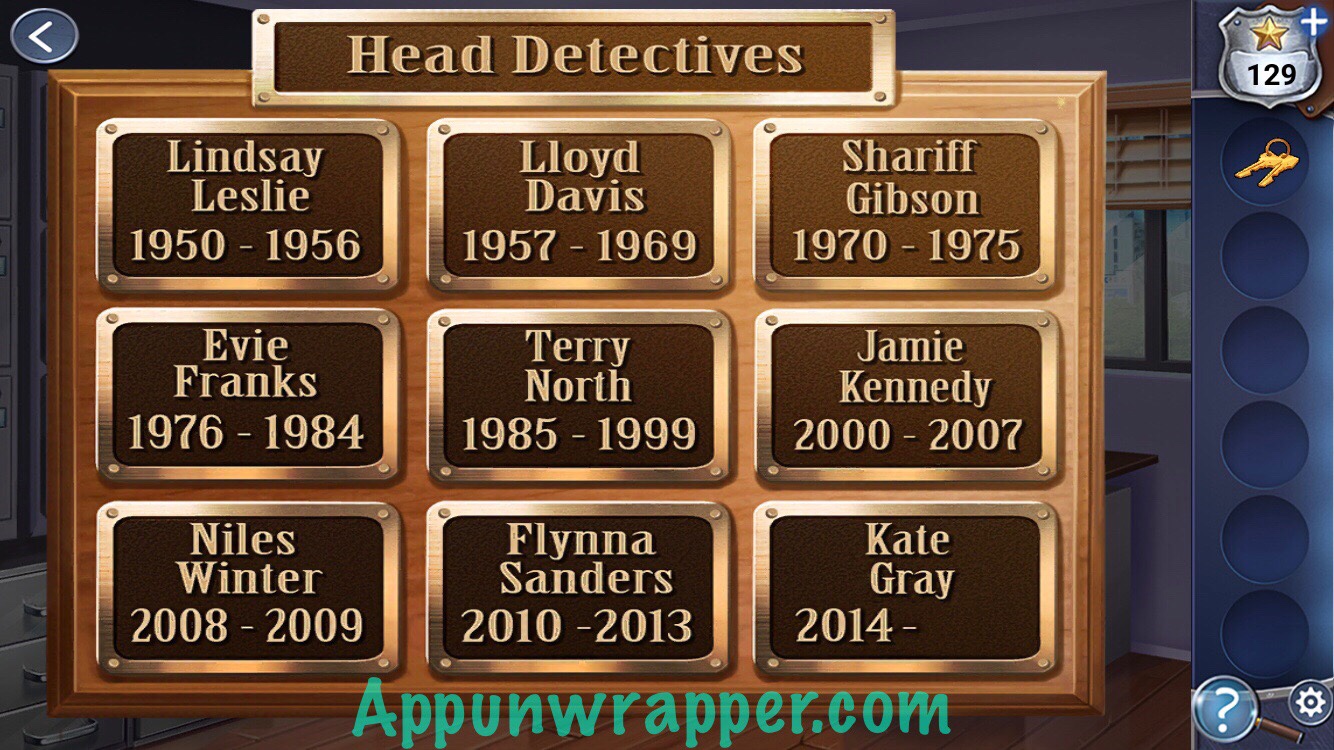 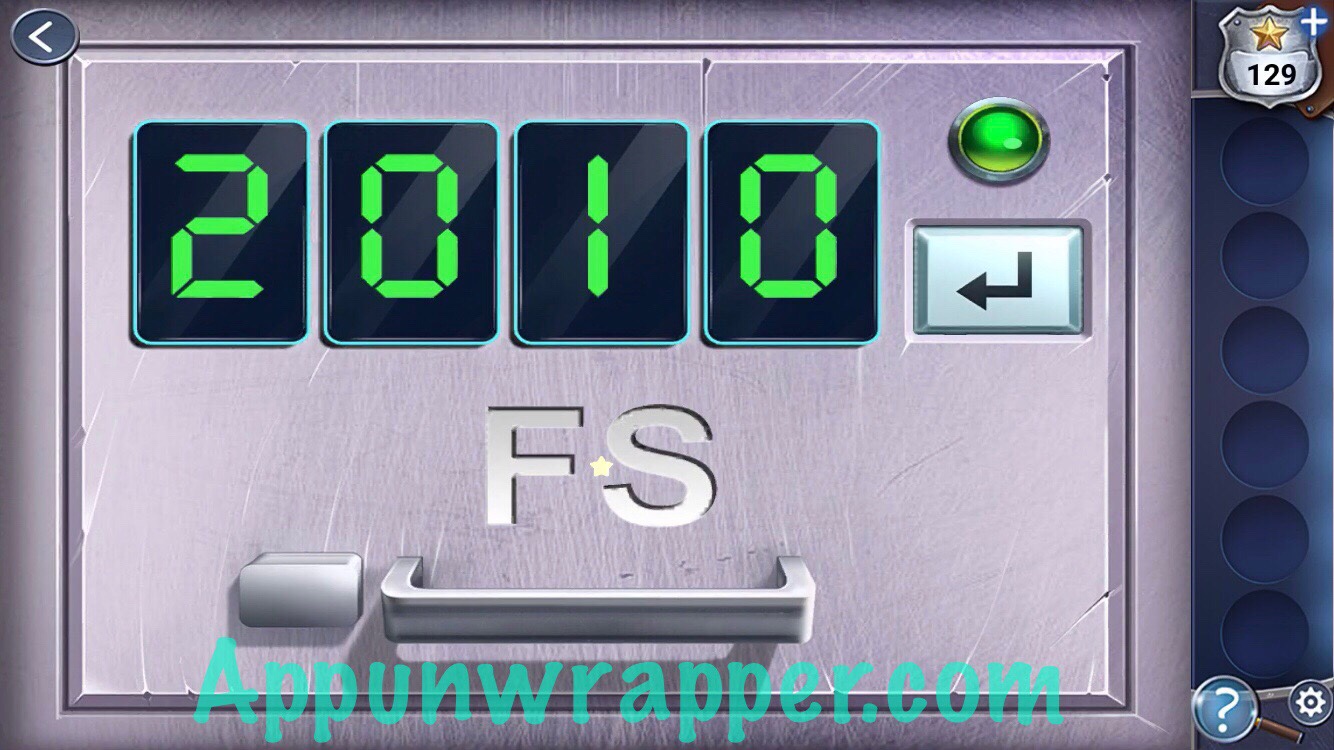 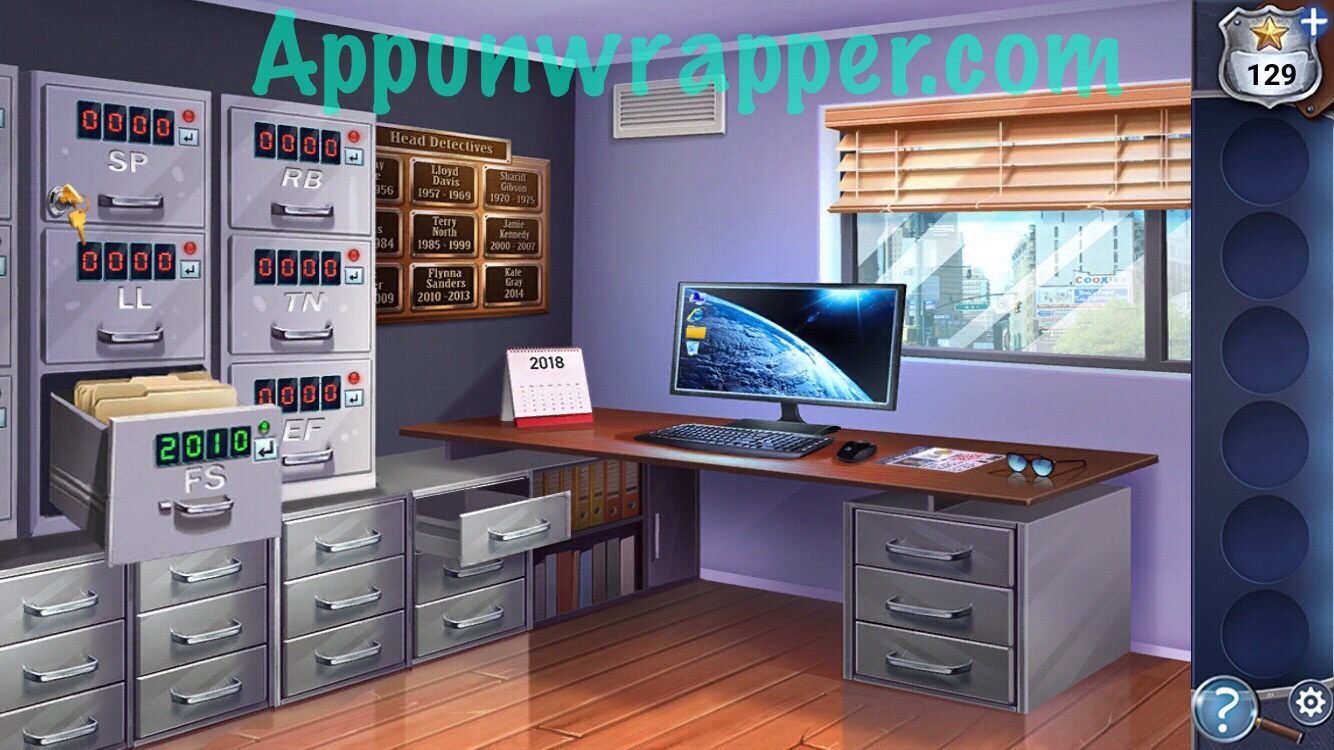 18. Now we have to put the events in order. It goes like this: 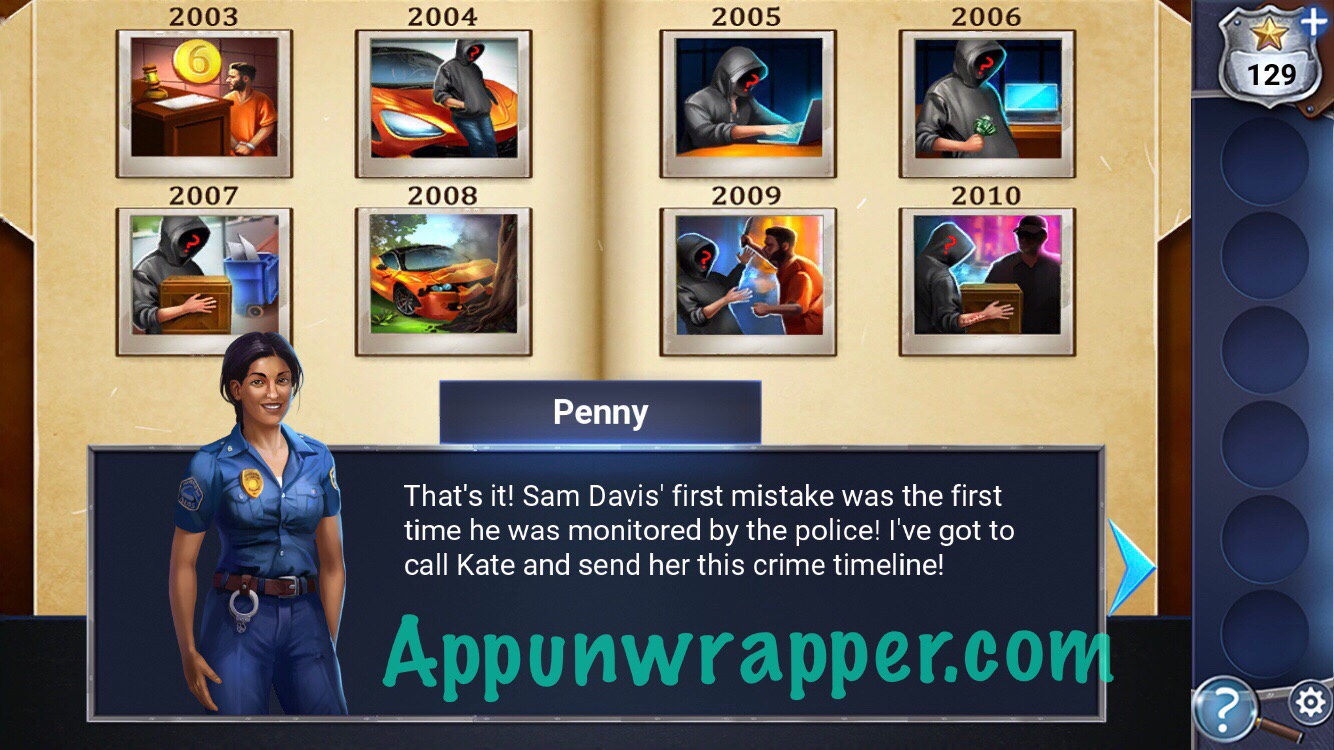 19. Now we’re playing as Kate again and have a bunch of clues to work with. One sticky note says “His first mistake was also his last.” Then we have four numbers for different amounts of drugs, but only four of them. So the first one gets repeated. That gives you:

Put them together and you get 38623. That’s the passcode! 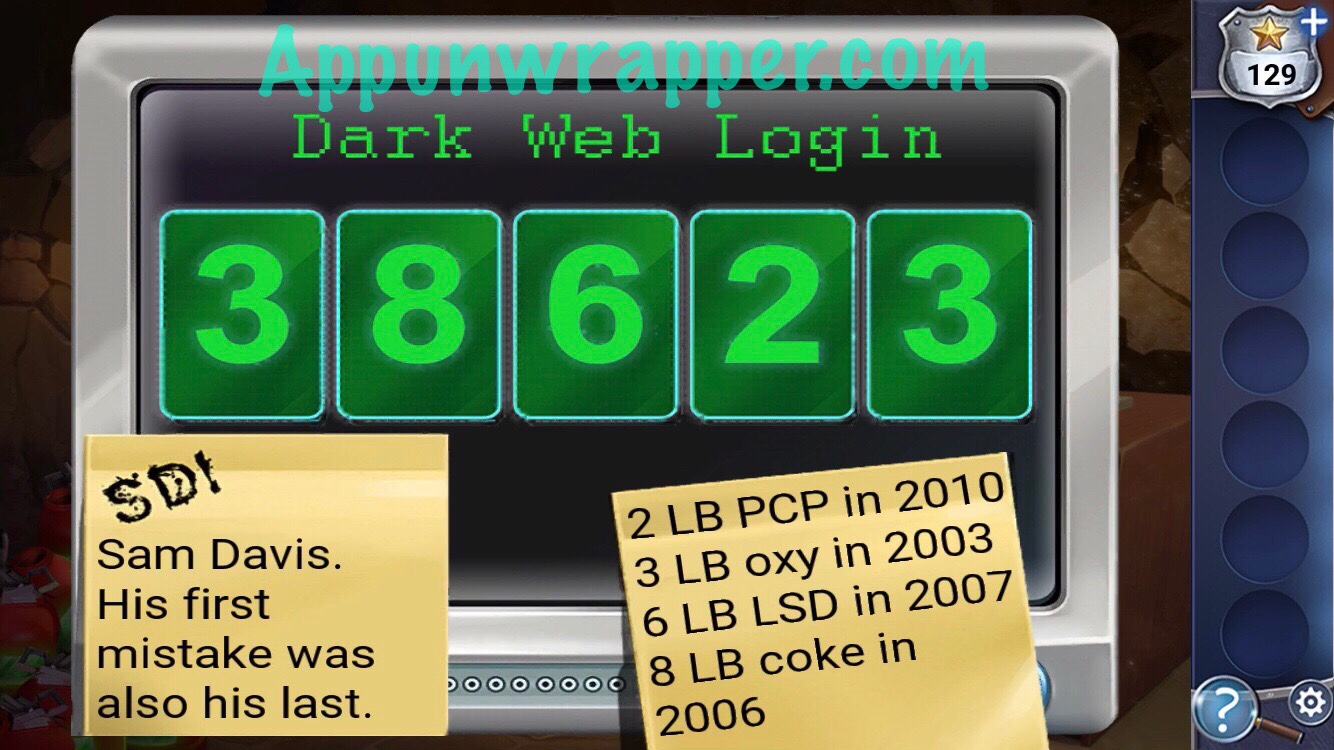 20. Looks like the name Charlie Sugarman comes up, and Petunia’s neighbor was a Sugarman! The plot thickens! 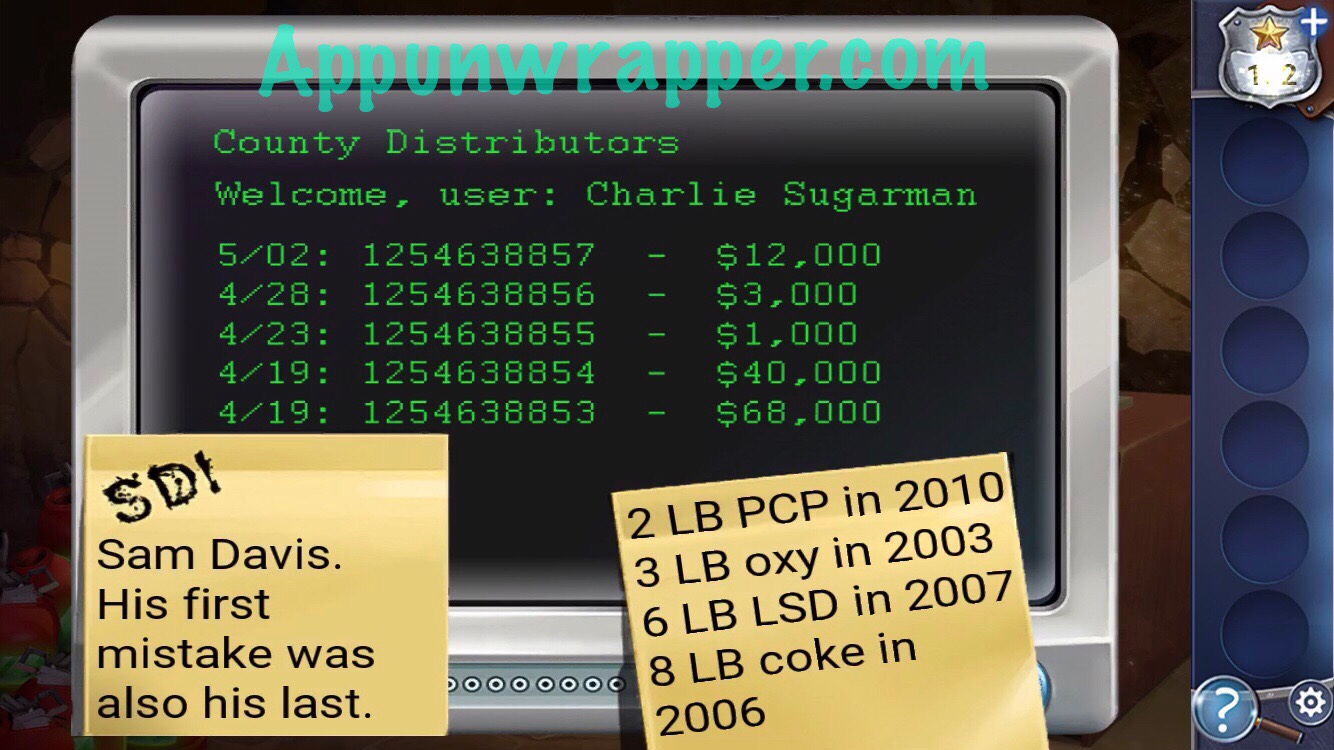 That’s the end of Chapter 5! Click here for Chapter 6 or choose another chapter below.