I always appreciate when we mobile gamers get a game at the same time as other platforms, especially when it’s something that took a lot of time and effort to make. There’s no shortage of free, shallow hidden object games in the App Store, but the full-blown, satisfying point-and-click adventures usually get ported over months or years later, if at all. Publisher Raw Fury brought us Clifftop Games’ Kathy Rain a few months after its PC release, and I enjoyed it quite a bit. So I was excited to see that their latest, Whispers of a Machine (WOAM) would have a cross-platform release. Besides a cool-sounding name, it has an interesting premise, as well. You play as Vera Englund, a cybernetically-enhanced secret agent who has to investigate murders in a post-technology Nordic town called Nordsund. But the most notable feature is how your choices shape your character, the story and the puzzles.

Thanks to a liquid called Blue, Vera has special augmentations that work as abilities. You start off with three — a scanner that identifies DNA, fingerprints and other substances; a biometric analyzer that can track heartbeats and tell whether a person is lying; and muscle boost, which gives her super strength for a brief time. Throughout the game, you make dialogue choices that influence and mold Vera’s personality. You can decide whether she becomes more empathetic, assertive, or analytical. If you tend to answer politely more often than snidely, people will notice and respond accordingly. Not only will it be reflected in the dialogue and other environmental details, but those choices will determine which augmentations Vera earns as the game progresses. Each personality trait has its own unique abilities, and depending on the ones you get, some puzzles will require very different solutions. 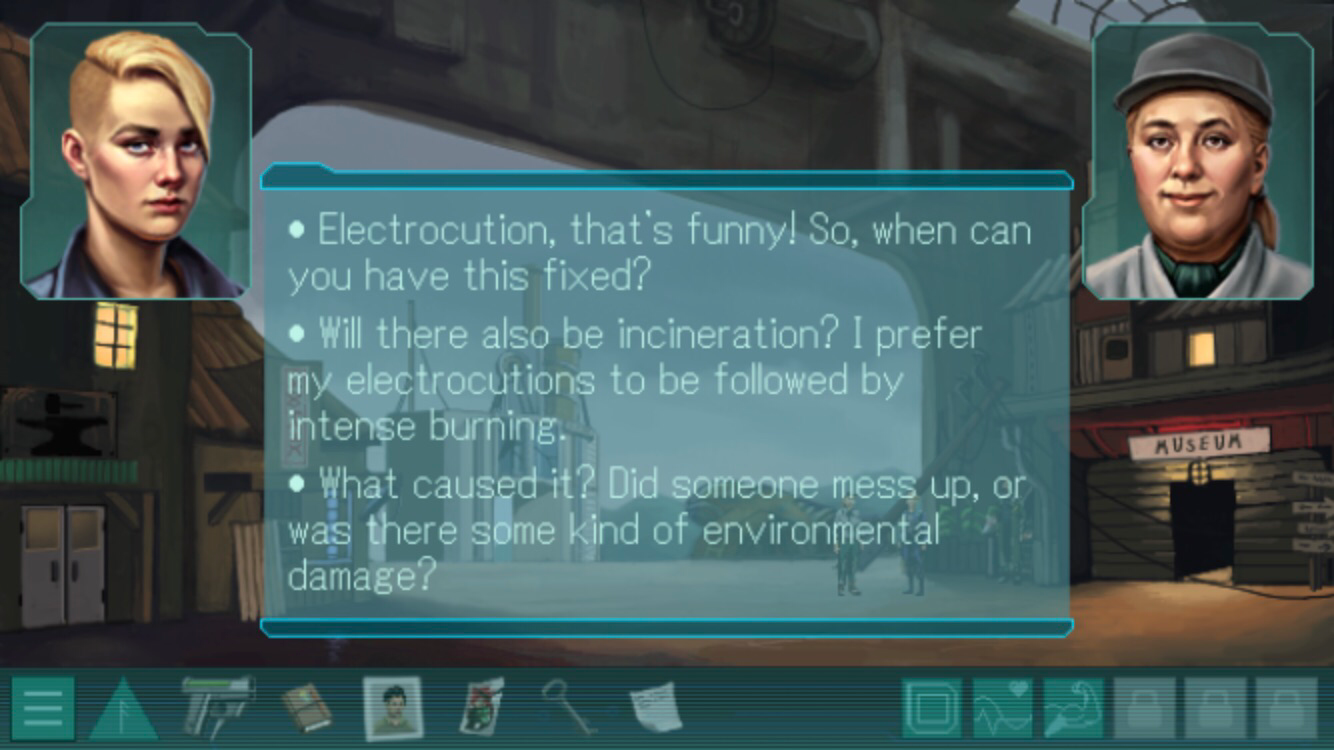 It’s not entirely new for adventure games to have alternate paths or puzzle solutions. What comes to mind immediately is last year’s supernatural Unavowed, by Wadjet Eye Games, which changed depending on which characters you took with you on a mission. But with Unavowed, it was far more obvious when you were using an alternate solution. There might be a ghost that only Logan can speak to or something to climb up, which only Mandana could do. In WOAM, you could mostly play through the game blissfully unaware that there’s any other way to play until you start a new game and answer questions differently. Even some of the puzzles that don’t involve specific augmentations still have several ways to solve them. But again, you wouldn’t really be able to see that until you play again and try something new. The game auto-saves, so you can’t really experiment and have to just accept the choices you made. For those who don’t have a lot of time or patience to replay the game several times but want to experience all it has to offer, that could be a bit of an issue. But you can easily skip dialogue and cutscenes, and also double-tap to teleport to exits. Since dialogue and walking are the most time-consuming parts of the game, it’s not overly inconvenient to replay it. 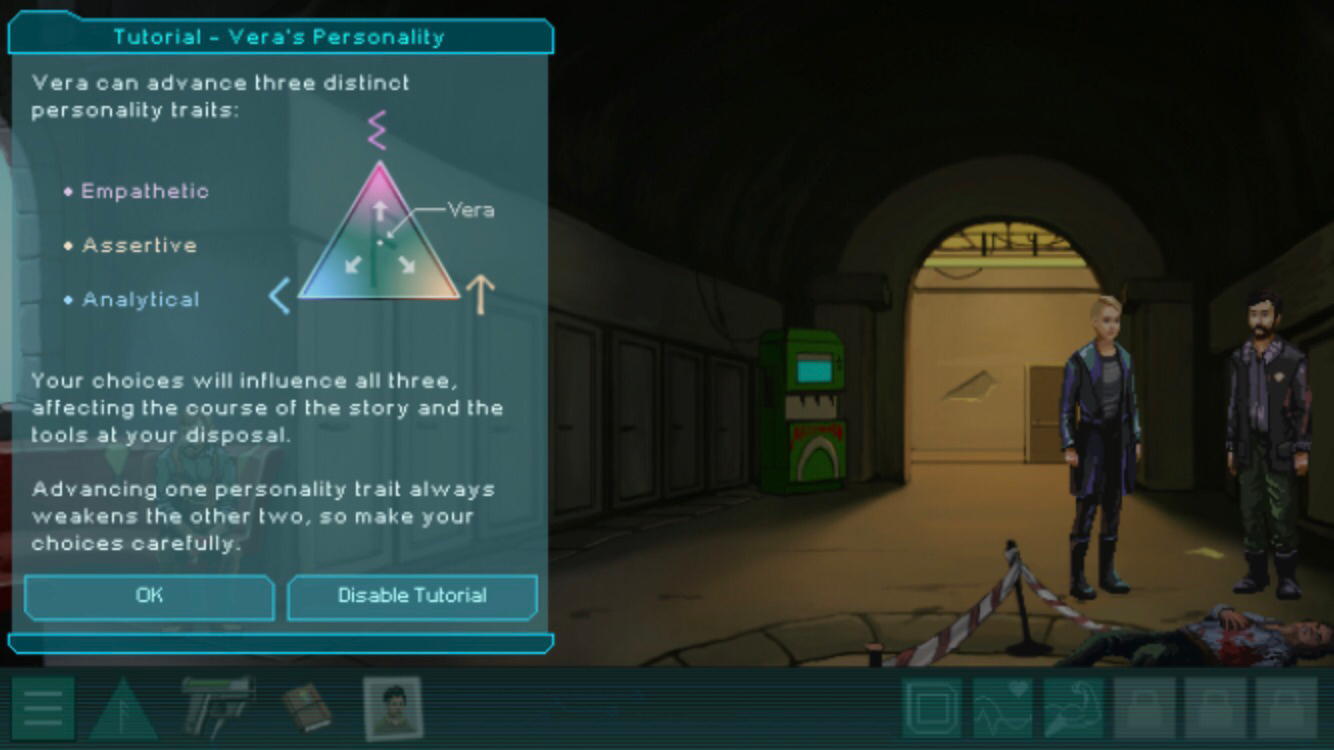 It actually took me a bit to warm up to Whispers of a Machine. As excited as I was to play on my iPad, I noticed that — unlike Kathy Rain — it was in widescreen format and therefore had black bars at the top and bottom. Also, on both my iPad and iPhone, the game was blurry, instead of having the sharp-edged pixel art shown in the App Store screenshots. The developer explained it’s like that because the latest iOS devices have a higher resolution than the game was designed in. I didn’t want to be a choosy beggar, seeing as the alternative was probably not getting the game on iOS at all. But the tutorial text was especially tiny and blurry, causing me to miss some important details and then get stuck for a while because I overlooked one aspect of an augmentation. Once I got past that sticking point, the game flowed more smoothly. For the most part, it does a good job leading you where you need to go using subtle hints from characters and environmental clues. The more people you talk to, the more help you’ll get. But there was one part that had me stuck for a long time, circling the same area I was directed towards, wondering what I possibly could be missing. Some extra clues or signage would have been welcome there, as it felt a little cheap despite the actual puzzle being quite clever and satisfying in the end. 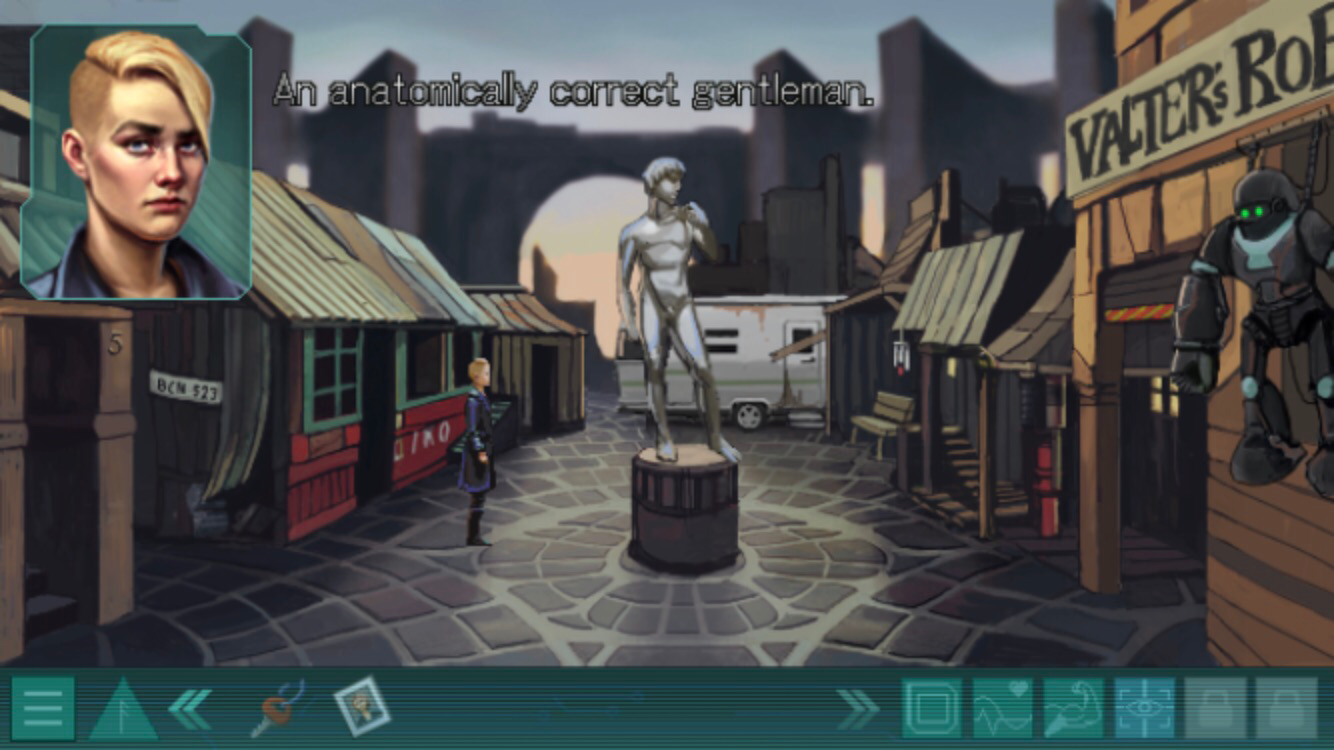 I also wasn’t immediately pulled into the world and the story. With Unavowed, I was hooked from the demo I played and knew instantly that I couldn’t miss out on the full game even if it meant playing it on my PC. Without spoiling too much, I’ll just say that the opening is pretty jaw-dropping. Before that, I devoured the iOS version of Technobabylon. While that has more in common with WOAM, since it’s a science fiction futuristic story and you use technology to solve puzzles, I found that world was much more brimming with life and interesting ideas. Technobabylon has a ton of great humor, but what made it even more memorable for me is how often it brought up morally ambiguous topics like whether it’s ok to eat human flesh if it was simply cloned cells and never actually held any life in it. WOAM mostly focuses on one topic. It takes place after the Collapse, in which humanity nearly destroyed itself due to its over-reliance on technology and artificial intelligence. Technology is almost entirely outlawed to the point that even the elevators no longer work, and there are certain groups that wish to bring it back. It’s an interesting concept, but I wasn’t that moved by it. I think perhaps more connections could have been made to our own society — like our reliance on Google instead of learning and holding onto information. Instead, this felt like a distant world that I didn’t really need to be concerned about, even though it’s not all that futuristic outside of Vera’s augmentations. 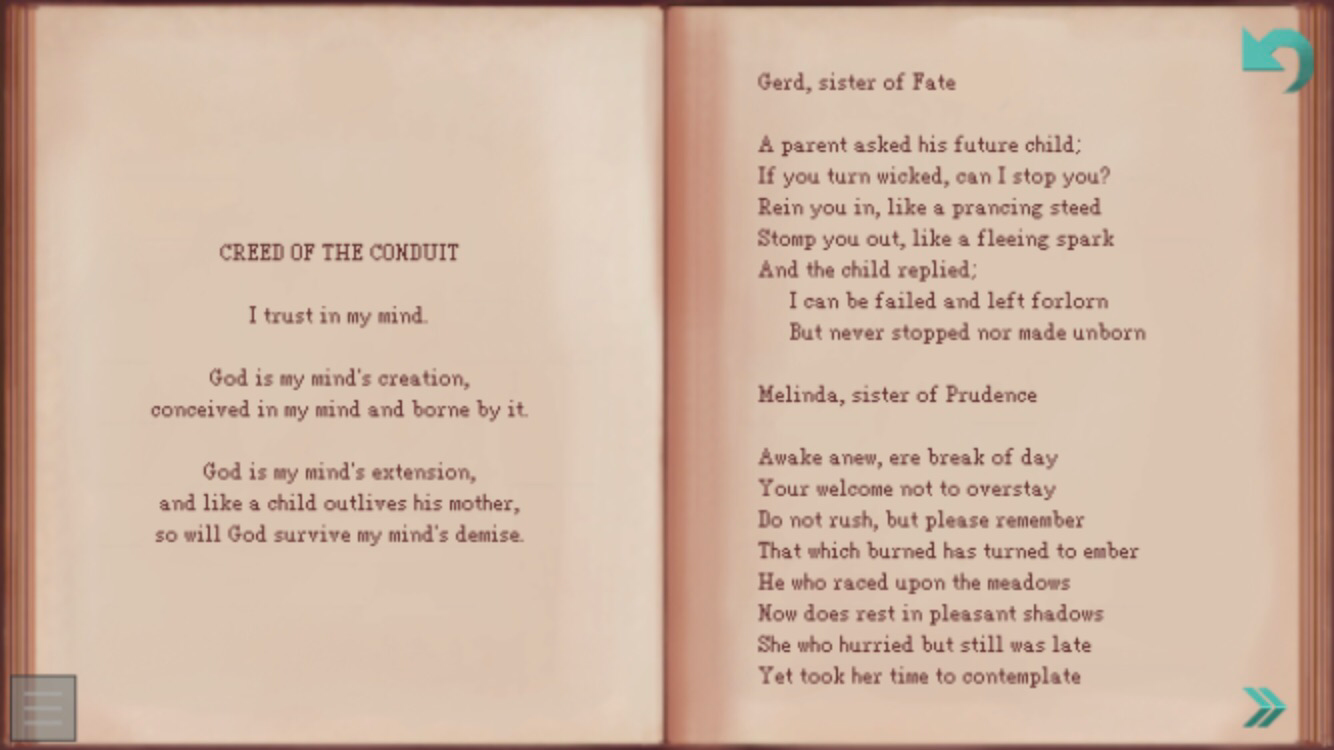 The story did start to pull me in by the end of the first of four in-game days, in no small part due to the excellent voice acting, cast by Dave Gilbert of Wadjet Eye fame. The actors are skilled enough that I didn’t even realize some of them were in Unavowed until I read about it. Sandra Espinoza played a major role in Unavowed as the half-djinn Mandana and voices Councilwoman Stina Rooth in WOAM, another central character. But they sound so different that I wouldn’t know they’re the same actress if I hadn’t been told. And I’m usually pretty good at recognizing familiar voices in animated works. In a game like this, with so much dialogue, the voice acting is what brings the characters to life. And while they might not all have been as memorable as the characters in Unavowed, they all had very distinctive personalities. My favorite is Dr. Persson, the only doctor in Nordsund, who also doubles as the coroner. He has a dark sense of humor and even jokes about eating a victim’s remains at one point. With the exception of the robot vendor, Valter, and his incredibly annoying sidekick, Nisse, the characters and actors are developed well and worth talking to. The story itself is quite tame compared to Technobabylon, but it has enough twists and turns to hold one’s interest if you push through the slow start. 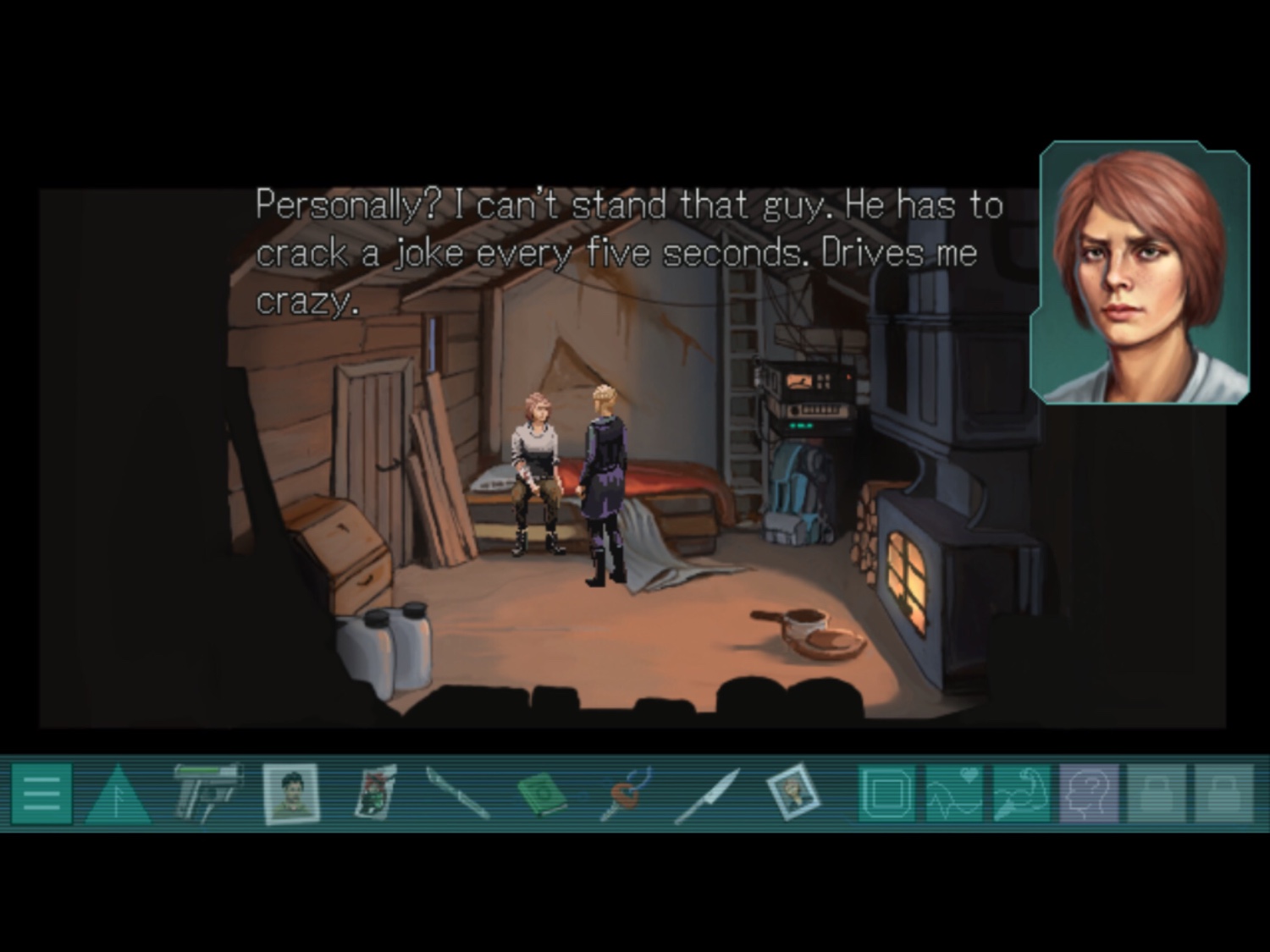 What really kept me playing through the end — and then several more times after that– were the puzzles. Vera’s augmentations each have several uses, and figuring out when and where they’re needed makes you feel like a proper detective. Some mechanics — like locking the biometric analyzer on a person — aren’t even needed unless you take a certain path, so nothing ever feels overused or repetitive. Pretty much every puzzle is unique, forcing you to think outside the box. In many ways, it reminded me of The Eyes of Ara, because you have to pay attention to every little detail. You never know where something that just appears to be a story bit might be part of a solution to a puzzle. Replaying the game and encouraging a different personality trait doesn’t feel like a waste of time because the mechanics are varied enough. For instance, if you choose the Empathetic route, you can cause short-term memory loss. But if you go with Analytical, you get enhanced vision that allows you to see in the dark. The goal is usually the same, but how you get there if very different depending on the skills you’ve acquired. 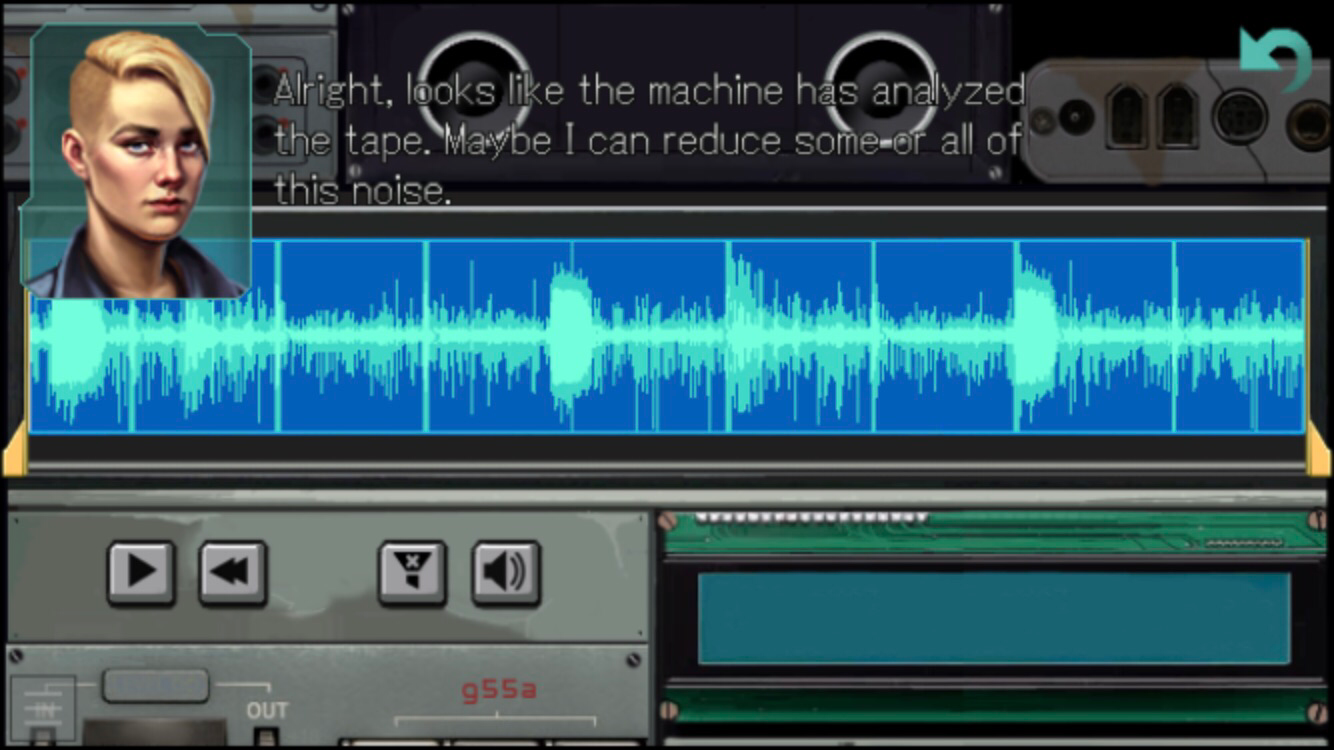 On my first playthrough, I ended up earning the Empathetic augmentations, mostly because those dialogue options seemed more natural to me and I didn’t want to be an a-hole. It wasn’t until subsequent playthroughs that I realized that the Empathetic route, for the most part, is the easiest. So being nice to people gets you further than being mean. I really liked that. You even get brownie points for going out of your way to return items you borrowed or thanking people for their help earlier. I’m not sure if WOAM is the first game to reward general kindness like that, but I thought it was a really nice touch. One might think being aggressive or following the rules and going by the book would be the most direct route, but it turns out you really do catch more flies with honey. 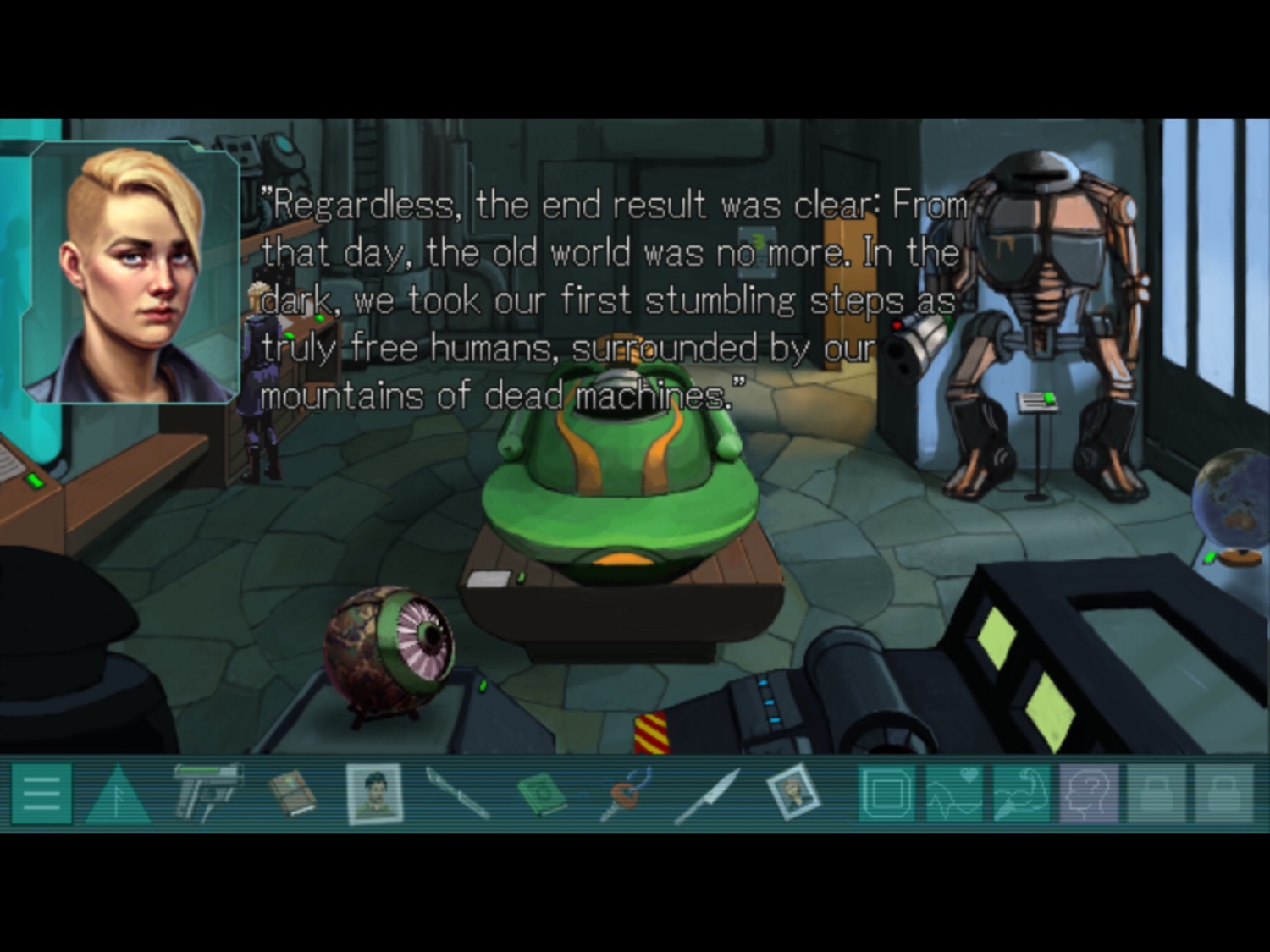 While Whispers of a Machine might not have lived up to my expectations story-wise, the clever puzzles and the way your actions mold your character make this a pretty easy game to recommend to fans of the genre. It gets off to a bit of a slow start, with a murder mystery that doesn’t appear all that exciting. But it’s worth sticking with, as both the story and especially the puzzles get much more complicated as you progress. It’s impressive how they managed to make each playthrough of the game feel so different, and I appreciated the quality of life features that allow you to speed through the game faster on subsequent playthroughs. I’m not sure if the iOS version is the best way to play, due to its bit of blurriness and the lack of achievements that the PC version gets. But the tradeoff is you pay one-third of the price and can take the game anywhere with you. However you decide to play it, though, it’s pretty much a must-have for any point-and-click adventure fans, especially if you prioritize puzzles over story. I’m so glad I didn’t quit early on when the game wasn’t pulling me in, because I would have missed out on one of the most satisfying point-and-click adventures in recent history. So don’t wait for technology to get outlawed — grab Whispers of a Machine and craft Vera into the special agent you think she should be.