You know that knife game you sometimes see in movies and TV shows, where some big shot tough guy quickly stabs the space between his fingers, trying to avoid mutilating himself? I wouldn’t actually attempt that myself, but I feel more capable of doing so after spending hours with Ian MacLarty’s Jumpgrid on iOS. It requires that same kind of finesse and precision — which I don’t usually have — but eases you into things at just the right pace so that your skills improve as you progress. Thankfully, I don’t lose a finger if I mess up — which is often! — so I’ve been eagerly going back for more of the insanity over the last week or so that I’ve had the game. If you like fast-paced, reflex-based games with flawless gesture controls, Jumpgrid is a must-have. But even if you don’t think it’s your speed, don’t walk away just yet, because the game offers accessibility options that mean just about anyone can enjoy it.

The name Jumpgrid is very literal, as you spend your time jumping around a 3×3 grid, snatching up gems. In the main level-based campaign, you need to grab the eight gems sitting on each node and then jump through the portal that opens in the center to get to the next level. You do so by simply swiping in the direction you want to move, making sure to avoid any moving obstacles that might get in your way. Besides simply jumping from one node to another, you can actually jump over hazards — if they’re not too big and there’s room for you to jump past them. Then on top of that, the grid is actually continuous in that you can jump off one edge and you’ll wrap around to the other side. I still have trouble getting used to that, but it isn’t a focus until the second quarter of the game, and it’s introduced at a comfortable pace that eases you into it. I hope with more practice, it will become second nature for me.

It also helps that the controls are so perfectly responsive, that I never feel it’s the game’s fault when I mess up. Instead, I acknowledge I can do better and jump back in for another try. Even if I take a break to refresh my tired reflexes, it’s never far from my mind, because I’m eager to give it another shot. It’s so perfect for short sessions, that frustration never turns into ragequit. I’m at the halfway point of the game, the second boss, and so far each level — besides a few exceptions — has been bite-sized, relying more on persistence and one’s ability to learn, and less on stamina. Since each level has a set pattern in which the hazards move, you’ll likely lose a number of times while you’re watching and memorizing the pattern. This means each level is not just about reflexes, but also finding the best route. And sometimes it’s about knowing when to slow down. Honestly, it’s a little hard to even describe. The feeling of playing Jumpgrid is one of those things you won’t really understand until you’ve felt it. It’s almost like time slows down for you if you focus and let the game hone your skills. I’m surprised I even like it this much, as there are few skill-based games that manage to hold my attention like this. 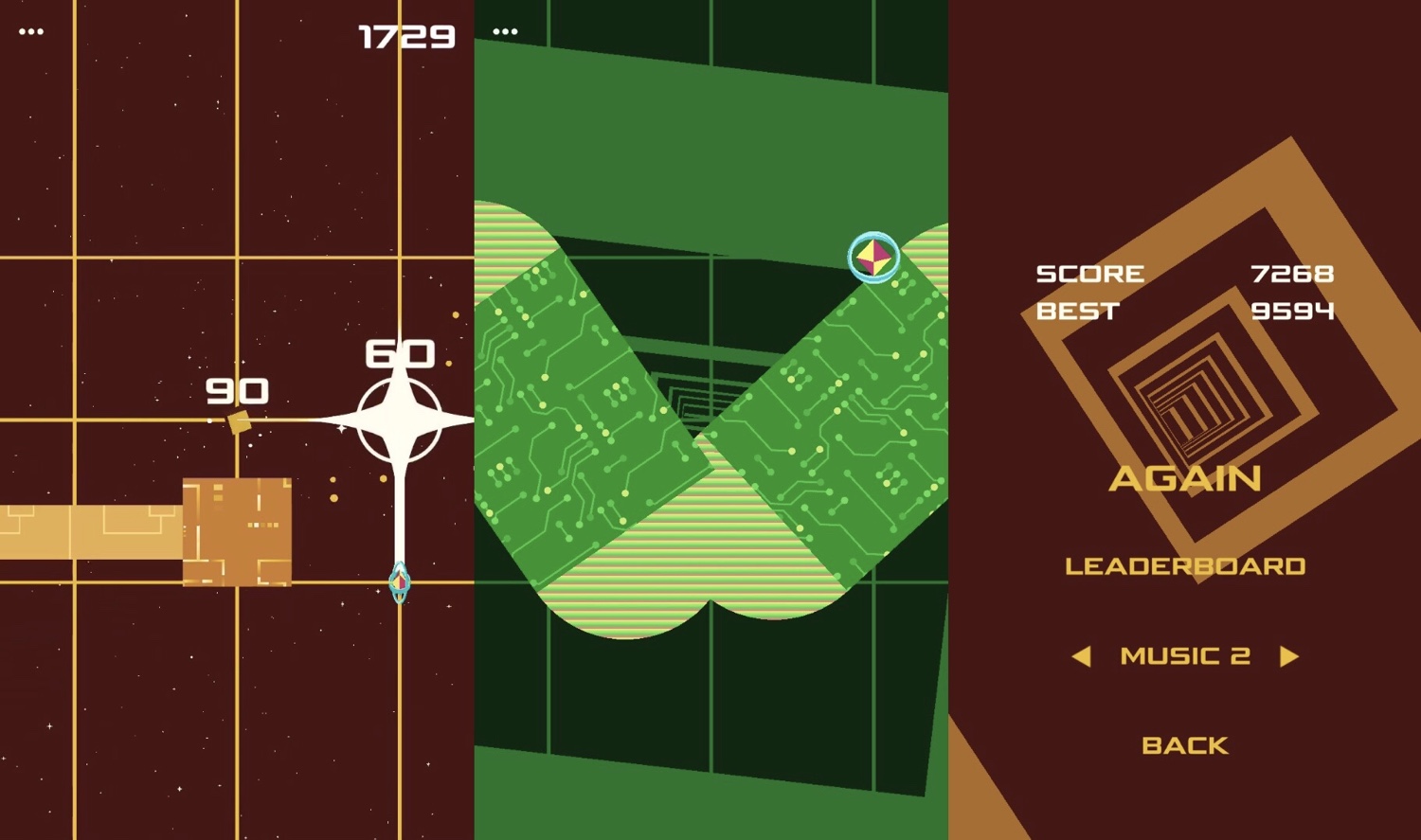 Besides the campaign mode, there’s also a speed mode in which you can play any of the four quadrants and try to complete it faster than others on the leaderboards. But my favorite mode is actually Infinite, which is an endless high score chaser. It uses the same controls and mechanics as the level-based game, but instead of having eight gems laid out for you and a set pattern for obstacles, everything’s randomized. You start with one gem somewhere on the grid that’s worth one point. Pick it up and your score will increase by one point and another gem will appear on the board, this time worth ten points. If you pick it up fast enough, you’ll earn those ten points and a twenty-point gem will appear. But if you’re too slow picking up a gem, it will quickly start counting back down all the way to 1. And then you’ll have to start the process all over again. If you manage to reach the 100-point gem, though, it drops back down to 2, then you get a multiplier and each gem jumps up twenty points instead of just ten. Then you reach two hundred and earn another multiplier. This whole time, the hazards are speeding up and changing, but it’s at a set pace. So if you go faster early on and rack up more points while things are fairly safe, you’ll reach a higher score before it all gets really hectic. It’s just such a brilliant design and I keep going back to try and improve my score. Right now, I think I’m at an impasse, nearly hitting ten thousand, until I get a proper handle on the wrapping around to the other side. Even a millisecond’s hesitation can cost you precious points and snatch a high score from your grasp. I know that it’s not only my reflexes holding me back, but more my fear of those edges. Once I can train my brain to get comfortable with the concept of wrapping, I think my scores will vastly improve. Knowing that means I’m unlikely to throw in the towel and just accept I’ll never do any better. And I love that about it.

Besides solid gameplay, level design, and perfect controls, the game has plenty of other features that are worth mentioning. There’s an option to reduce flashing, which I took advantage of right away. The music and sound effects have separate toggles, so if you find the music distracting you can just shut it without sacrificing the sounds. It plays in landscape mode on iPad and in portrait on iPhone, the most comfortable way to play on each. I prefer iPhone, because I can play with one hand just about anywhere. But thanks to flawless iCloud sync, you don’t need to choose between your devices. You can swap back and forth as much as you want and see which feels more comfortable for you. On top of that, you can slow down the speed of the game if you find it too hard. It goes as low as 10%, and I think that’s slow enough that just about anyone should be able to handle it. And if you’re worried about how that affects the leaderboards, only runs played at 100% speed count! So it’s a win/win for everyone. If you care about a challenge, you can compete in the leaderboards and if you just want to enjoy the game at your own speed, you can do that, too. I wish more games offered that kind of flexibility.

I really have nothing else to say about Jumpgrid. I can’t think of a single complaint. Even if the game does get too hard for me at some point, I know I can always lower the speed — though I hope I won’t have to. Even though it originally released on PC, the simple and responsive swipe controls feel perfect for touchscreens. There are no pesky on-screen buttons to worry about, and the game recognizes even the slightest swipes, so your fingers really can dance around the screen. I also can’t think of another fast-paced, reflex-based game that does such a good job honing the player’s skills. Instead of just saying “git gud,” it actually makes you a better player if you stick with it. And I really want to get back to playing, so please just go download Jumpgrid and see for yourself what a smooth, enjoyable experience it is.

The Girl Who Sold the World (TGWSTW: Walkthrough Guide