One type of game that there’s no shortage of on iOS is Sokoban, especially PC ports. The block-pushing genre lends itself well to the platform, as it usually doesn’t require fast reflexes, and the controls are mostly directional swipes. Some recent highlights for me were Pipe Push Paradise and Persephone, both games I highly recommend playing if you haven’t done so yet. As a big puzzle fan, I’m always eager to find new Sokoban games, and I liked the premise of Joseph Gribbin’s Magnibox, which utilizes magnetic forces in its puzzles. While I’m not sure it’s as memorable for me as my favorites in the genre — like Baba is You — I enjoyed my time with its 160 levels and never felt like it overstayed its welcome.

In Magnibox, as you might guess, you play as a box that’s also a magnet. Or is it a magnet that’s also a box? Either way, you’re a four-sided object that rolls and one side is magnetic. In each level, the goal is to get to the star. At first, you just roll onto platforms that lift you up, and it doesn’t matter which side you land on. But soon enough, magnetic boxes are added. If your magnetic side faces the box, you can then pull yourself to it. This works kind of like a grappling hook might, allowing you to cross gaps and fiery hazards, or even get up to a higher platform. Later, you encounter boxes that push you away. As with most Sokoban games, there are blocks to push around and buttons to press. And there are even magnetic boxes that you can push and pull away. Since only one side of you is magnetic, how you land is a big part of the puzzle. You often have to use different tools to change your orientation. For instance, walking onto a conveyor belt that’s going in the opposite direction will turn you a bit. That may allow you to then face the magnetic block above you. A portal can have a similar effect, or just pulling yourself across to the room to another magnetic box can allow you to access a magnet you couldn’t reach before. 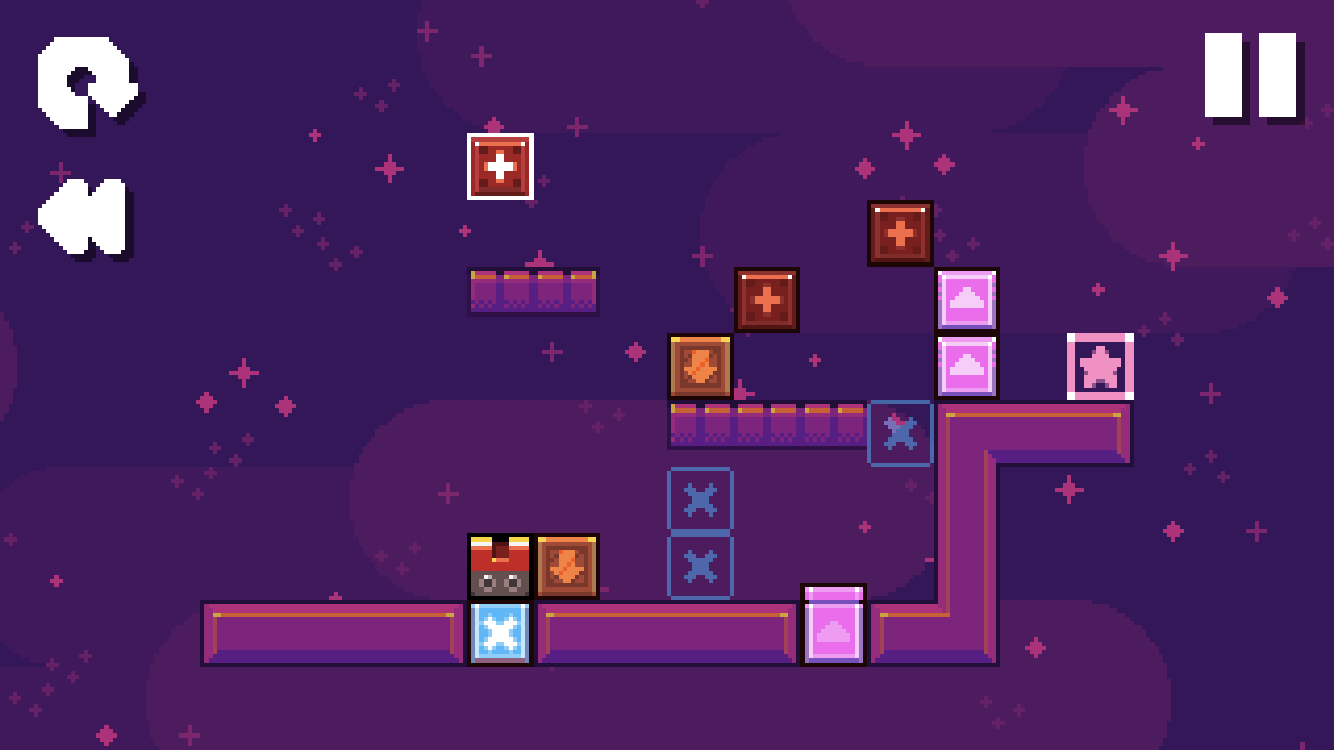 What’s strange about the game is that opposites don’t attract. Instead, when you’re a red magnibox, you’re pulled towards a red positive magnet and repelled from a blue negative magnet. If you’re blue, you’re pulled to a blue magnet, and vice versa. I’m guessing that choice was made to keep things less confusing from a puzzle standpoint. It is strange, but doesn’t take away from the puzzles themselves. If anything, it allows you to focus on the goals at hand and not have to worry too much about the math of it all. I think it makes sense, especially when floating negative and positive symbols are added that can change your color. The game might be more accurate if opposites attracted, but I think the simplicity of red-to-red and blue-to-blue works well for it. And no one really knows how magnets work, anyway, right? 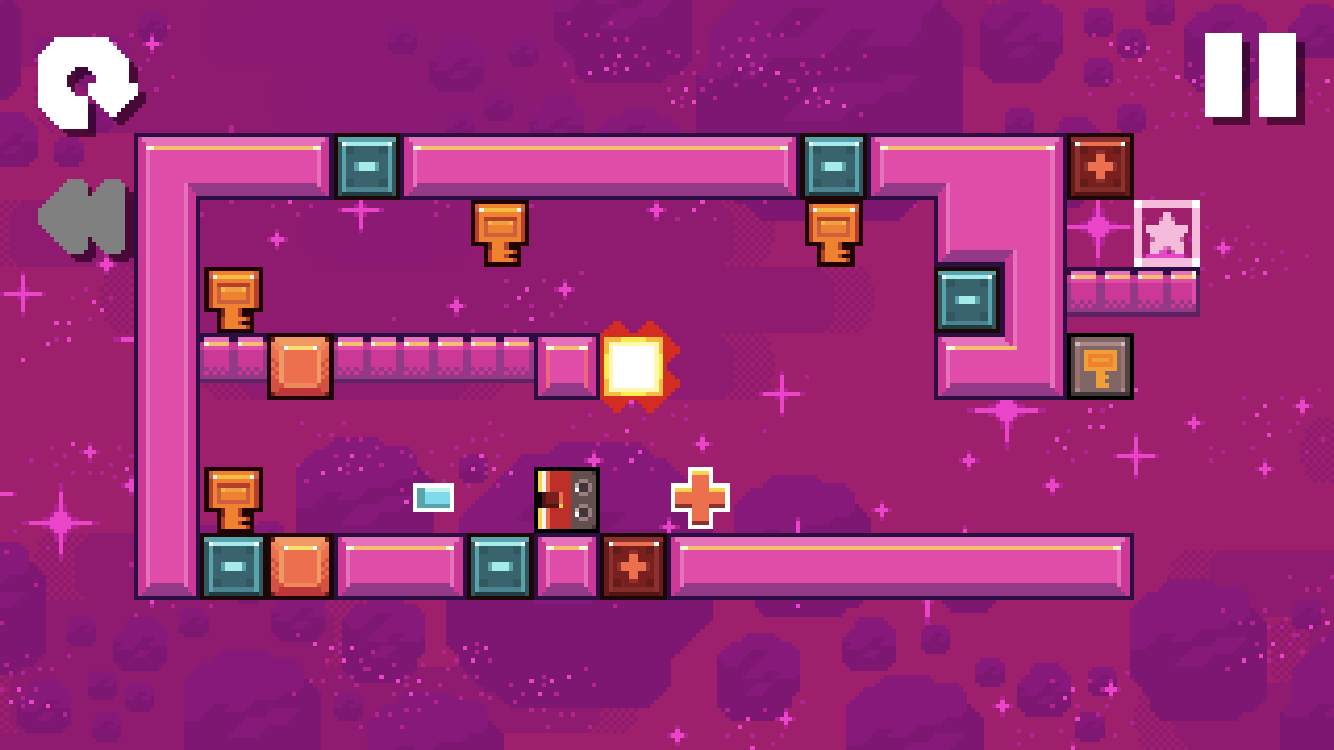 As you progress through the eight color-themed world, you’ll be gradually introduced to new mechanics. Most are familiar, but they fit well with the basic concepts. For instance, there are crumbling floor tiles locked tiles that disappear only after you collect all the keys. There are lasers that kill you but also unlock certain tiles. As I mentioned, there are switches that you usually need to push boxes onto. There are even clouds that that float and stay put wherever you push them to. Add negative and positive charges to those clouds and now you’re pushing and pulling them across the room. There are even tiles that you can trade places with, and others that crumble after one use. The mechanics are added at a nice and steady pace so the game never gets stale. And there are quite a few head-scratchers. Thankfully, you can unlock all the levels from the start, so you never have to stay stuck on a single puzzle. In fact, the last puzzle I solved was in the sixth world. I’m glad I was able to skip and come back to it, as it was a satisfying puzzle to solve and I would have hated to have to cheat in order to continue. 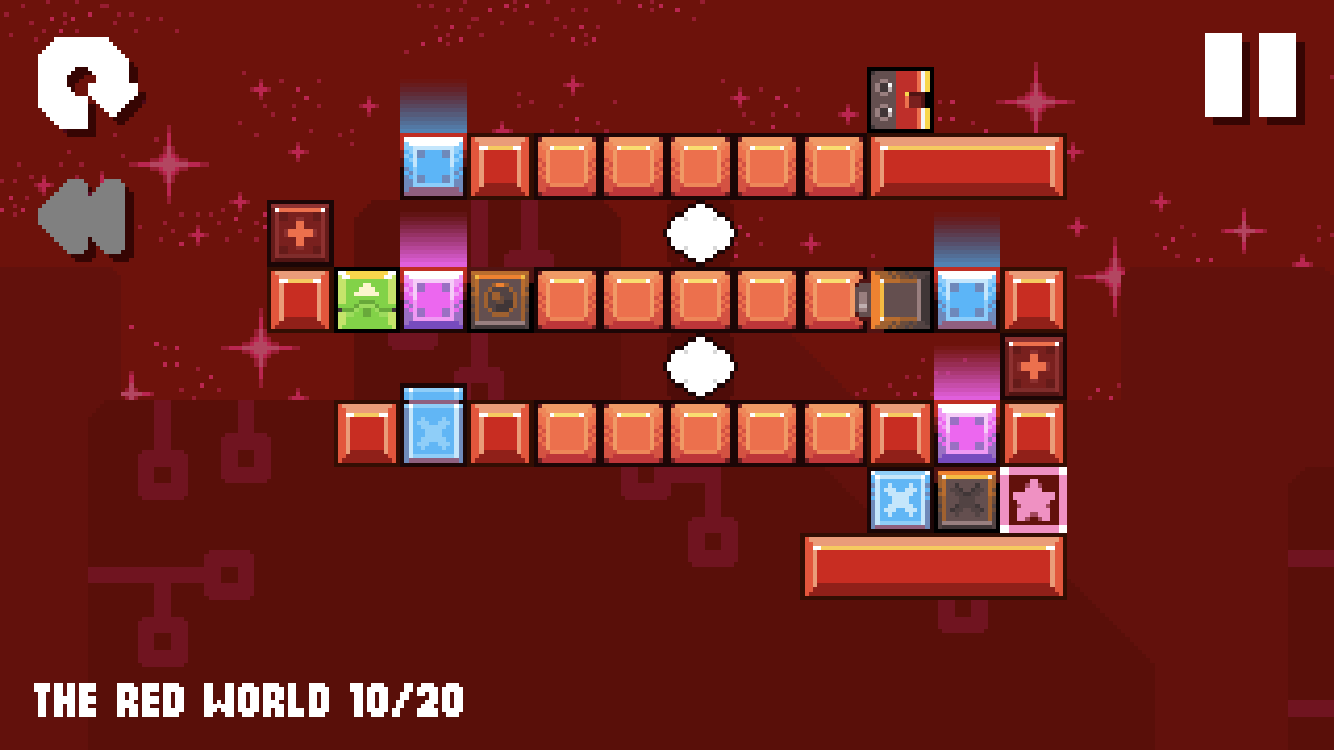 On top of all that, there are some secrets to find, but I won’t spoil that for you. Overall, it’s good, solid puzzler, even if it’s not the most memorable out there. That said, I do have a few complaints related to the controls on iOS. The way they work is that you swipe in any direction to roll, and can keep your finger on the screen to keep rolling. To use the magnet, you tap anywhere on the screen. If you’re facing a magnetic object, you’ll interact with it appropriately. The problem is, the game isn’t very good at recognizing small swipes, so they’ll often be confused for taps. It’s especially bad on iPad, though the developer is aware of it and said a fix is in the works. It’s much more playable on iPhone, but I still had some mishaps. 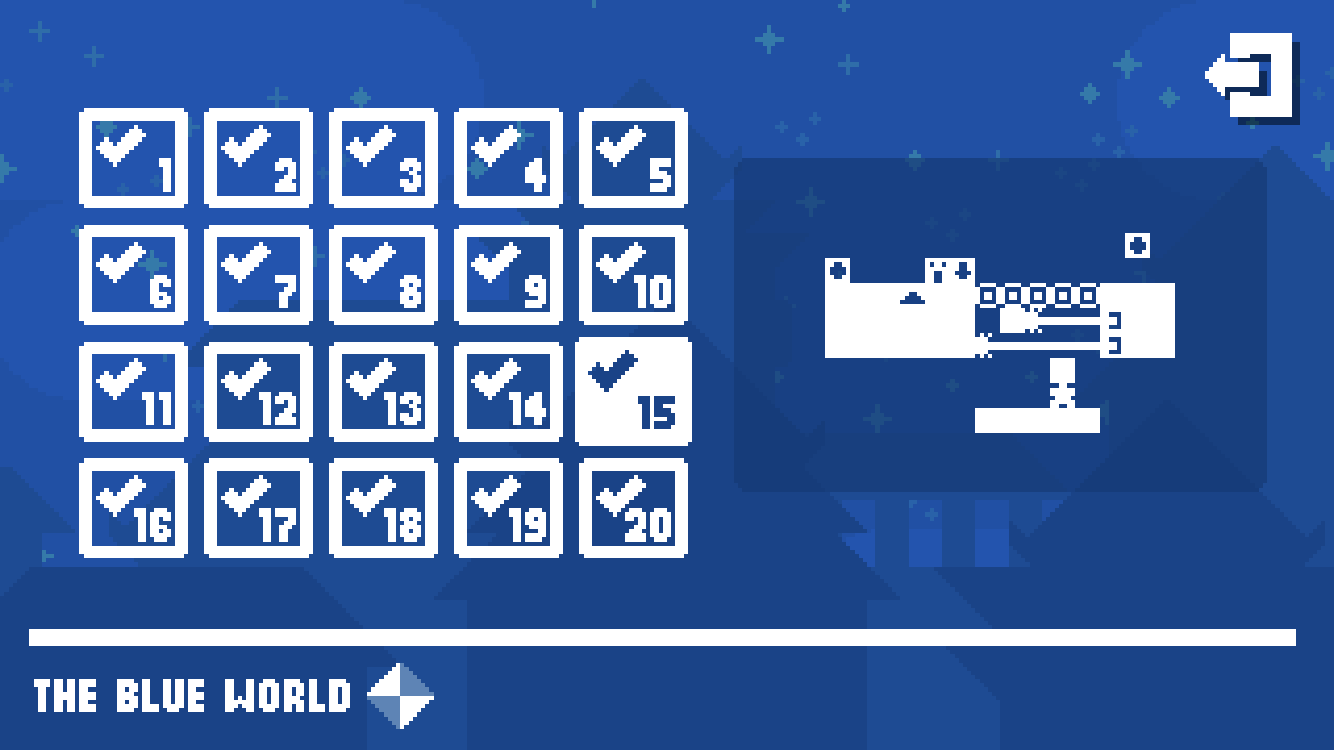 Thankfully, there’s an unlimited undo button, so any mistakes due to the controls don’t have to mean you start over. That said, I do wish the undo button was a bit snappier and less ostentatious. Each tine you tap it, a giant “rewind” icon appears on the screen for a split second. It’s a tiny bit jarring. It’s also tiresome if you have to undo more than one move at a time. For occasional use it’s fine, but if you’re in middle of a fairly complex level and you were carelessly messing around, you might want to undo about ten-to-twenty moves instead of starting over. It’s a little annoying to have to tap that button twenty times and wait for it. I would have preferred being able to hold down the button to rewind faster. Still, it’s a small complaint for an otherwise solid game. I’m grateful as is that there even is an undo button, as not all puzzle games include one. I’m just hoping it might be improved upon to make for an even better experience. 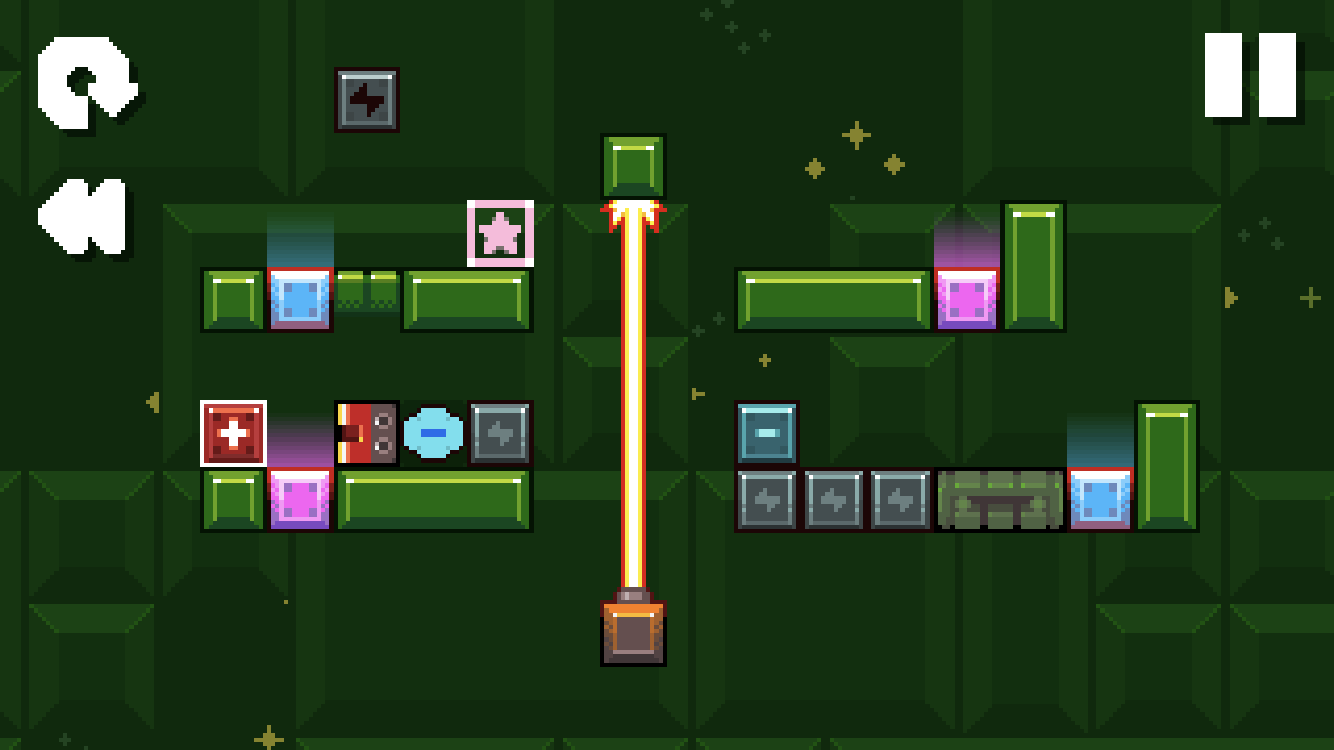 If you’re looking for a new puzzle game with strong level design and plenty of interesting mechanics, Magnibox is a solid choice. The puzzles are challenging but not overwhelmingly so, and the difficulty ramps up at a friendly but brisk paced It’s also a great fit for mobile, though its controls could use a little refining. It doesn’t do anything revolutionary, but it combines tried-and-true mechanics with some new ones to make a satisfying game that should please just about any puzzle fan. So if you’re attracted to well-designed puzzlers and aren’t too repelled by minor control issues, pull yourself over to the App Store and grab Magnibox here.