Luna Strange is a new room escape game by Fantastic, yes, the developers of Returner 77 and Returner Zhero. These developers have already proven that they know how to make a game that looks great, and I enjoyed aspects of both their previous works, so it was an easy enough choice to buy their latest for only $0.99. Luna Strange is not set in space like the Returner games, instead going for an experience closer to what The Room series offers. You’re trapped in a room and need to look around for objects you can use to solve puzzles and eventually escape. Well, sort of. Only one episode is currently available, and it ends when you pick up a book, not open a door. At first glance, the game looks like it might be a worthy addition to the Room-alike genre. Unfortunately, some poor design choices, clumsy controls and game-breaking bugs make for a game that’s all beauty and no substance.

My first experience with the game involved a lot of wasted time and, as a result, a bad case of motion sickness, which I usually only get with 3D games that give you freedom of movement. It’s incredibly rare — maybe even unheard of — for an on-rails game to make me queasy. Luna Strange uses similar controls as The Room series, where you double-tap to zoom in, pinch to zoom out, and tap to pick up objects. Unfortunately, it involves a lot more zooming in than seems necessary, which I’m sure contributed to the motion sickness. Instead of simply zooming in once on a puzzle to be able to interact with it, you often have to zoom in twice. So more tapping and more jittery camera movements. And unlike the Room games, you can’t just go from one object to the next if it’s within your sight. You always have to zoom out first. All this extra movement added to the problem. Sometimes, you might even double-tap on something near you and instead get thrown across the room to something else. Mind you, this is a very short episode with only a handful of puzzles, so it’s especially exasperating how uncomfortable an experience it is. The Returner games were fairly lengthy and, though not free of issues, never made me sick throughout my hours spent with them. 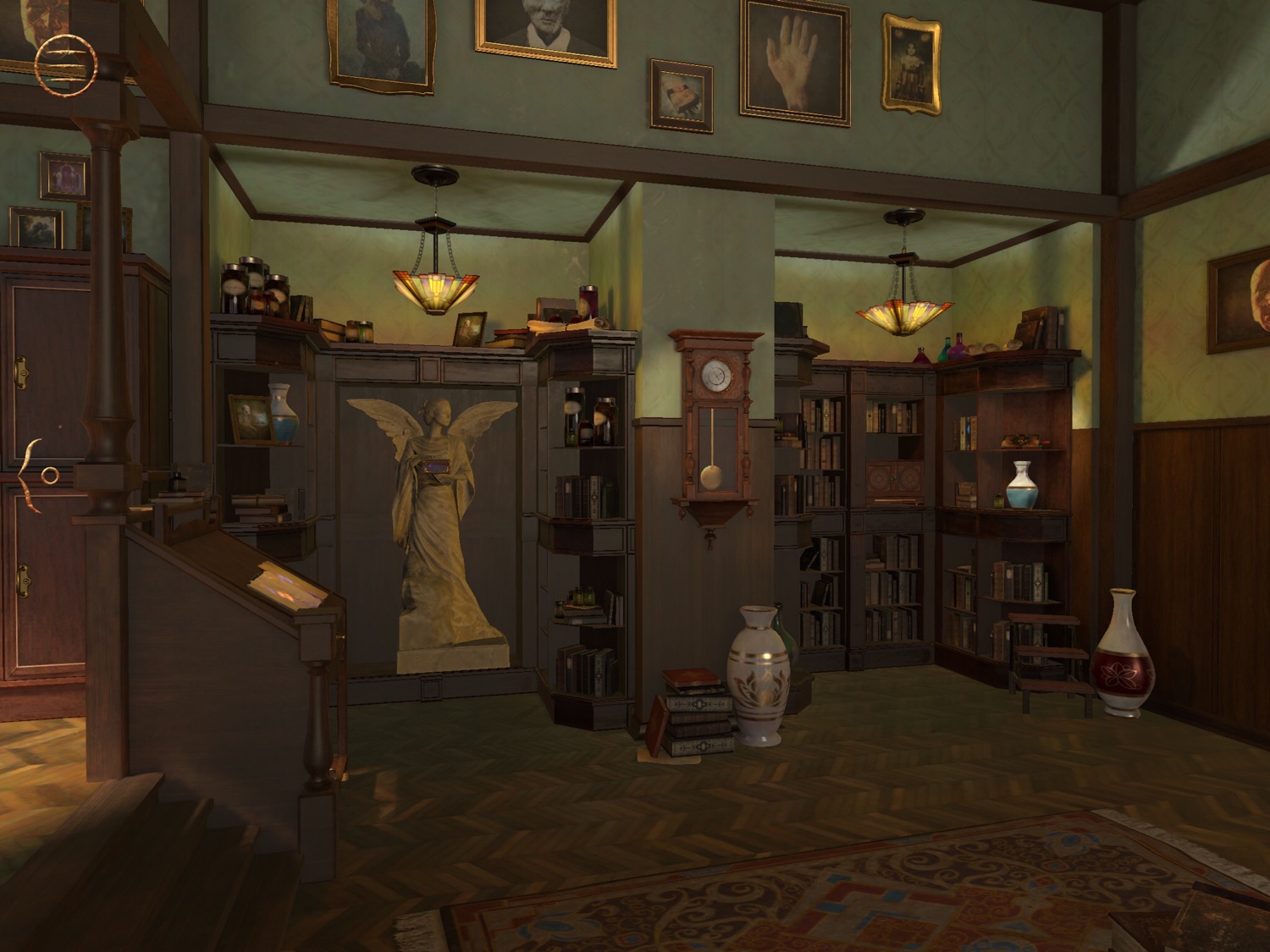 The game also pads out its length by making nearly every single object in the room interactive, even though very few are actually used in puzzles. See all those books and vases in the image above? You can zoom in on them all, move some of them, even rotate each vase. You might think that seems great at first, giving it a bigger sense of exploration. But after you open your fifteenth drawer or zoom in on your eighteenth group of books to find nothing of value, it wears thin. And also adds to the motion sickness, if you’re like me. There’s a somewhat flimsy reason given for all this, though. The first time I found a glowing blue seal, I thought it was an interesting idea, hiding extras for players to find. Move a glass vial and there could be a seal below it. Maybe there’s one on that book or on a vase. Extras like that can be fun to find in a game. But I soon discovered that all they do is allow you to skip a puzzle — in an already short game. These might have actually been fun to look for if there was some reward for it other than skipping part of the game. Even an achievement would have made me want to spend the time looking for them. But with the lack of proper incentive — and the fact that you lose any you collected if you take a break from the game — I quickly lost interest in them. 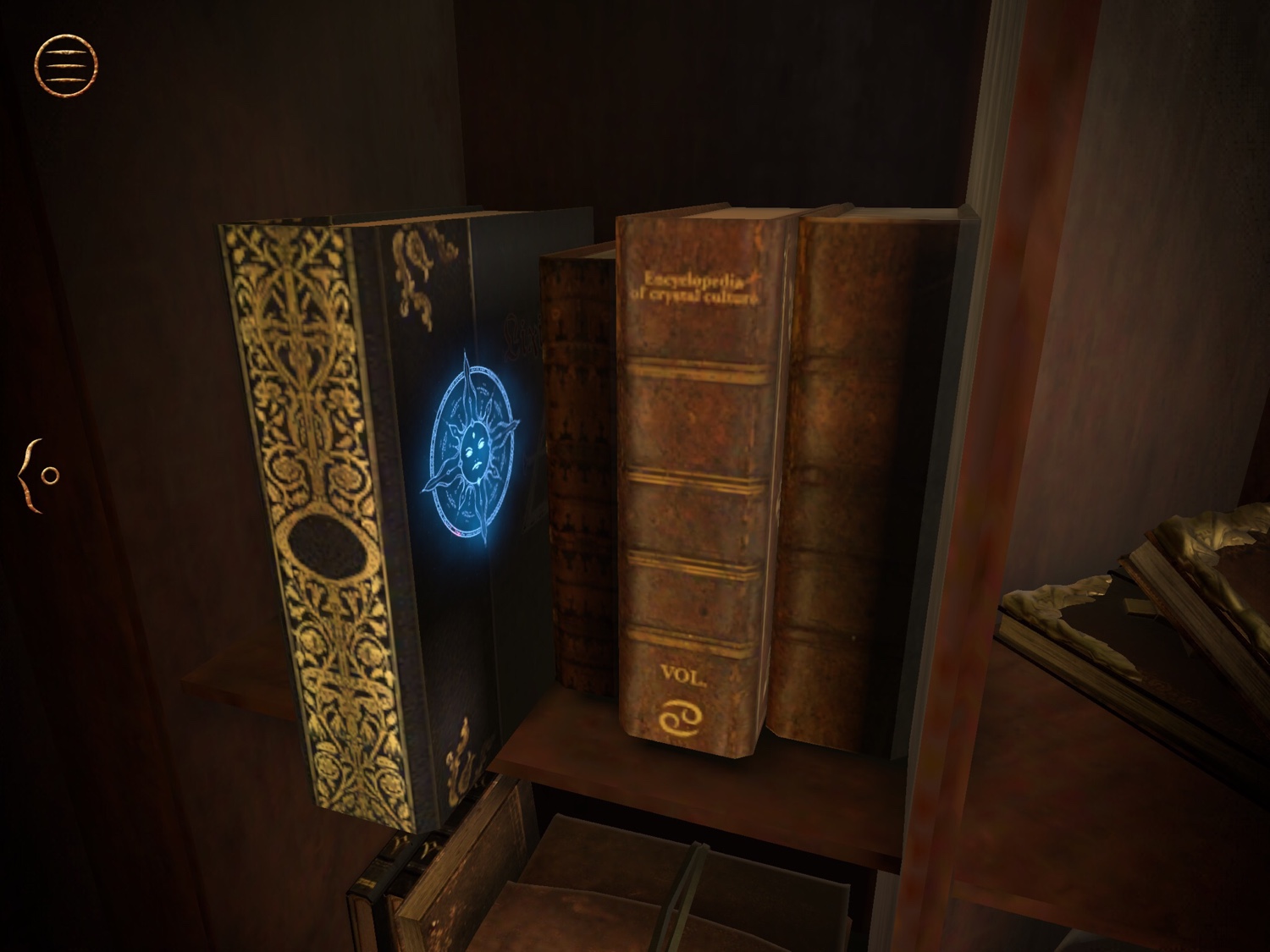 Now, you may have also noticed that the App Store description keeps mentioning magic, even goes as far as calling Luna — who you’re playing as — a wizard. That sounds exciting, right? Maybe you’ll have to draw runes or use a magic wand to transmute objects? Well, I’m sorry to report that all it means is sometimes there’s a shimmery colored surface over objects or puzzles — which actually reminded me of The Birdcage 2, which did a far better job with it — that lets you know you can use magic. When you encounter this substance, the game helpfully instructs you to use two fingers to swipe right. That will either reveal what’s hidden under it or allow you to access a locked item, or just activate a puzzle. It’s really not that exciting when it works. And when it doesn’t work, it may just zoom you back out, forcing you into this perpetual loop of swiping with two fingers, then tapping to get back to it, hoping that it will eventually work. Sometimes, it turns out the camera wasn’t at the right angle. Or if you wait long enough without doing anything, the game might realize you’re struggling and give you the instructions again. Only then will it finally work. And all these issues are exponentially more likely to happen if you had the audacity to take a break from the game before completing it. 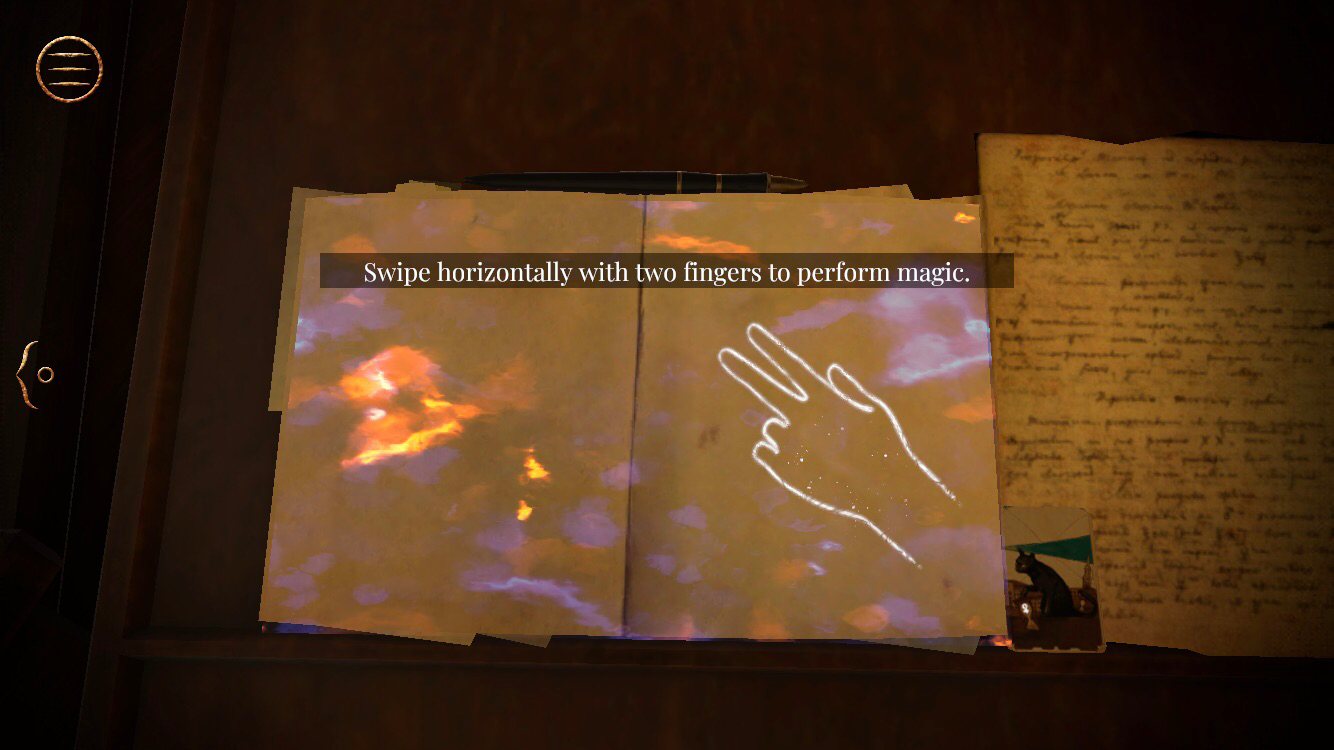 On my first attempt at playing, I spent a lot of time looking at every detail and making myself sick, so I took a break in the middle. When I finally felt up to returning, I managed to make good progress and came close to the end. In fact, I learned later that I was at the very end. But because I took a break in the middle, items I already used and needed in order to finish the game went missing. Before I realized that, I wasted more than ten minutes just looking around at things, wondering what I needed to do next and what happened to the book that I was supposed to grab. The game has so little feedback, that it’s difficult to tell when something is a bug or a feature. It turns out that, more often than not, it’s a bug.

I started a new game after that, since I realized that I was close to the end anyway. And I figured I could avoid the motion sickness by going straight to the items I needed and not wasting any time wandering around. Sounds good in theory, but this is how I learned of a mind-boggling design choice. It turns out, inventory is limited to four slots. That can work in a game if it’s designed so that you would never need to hold more than four items at a time, but that’s not the case here. It is entirely possible to find an object while your inventory is full and then not even realize that you should be able to pick it up. The game doesn’t give any feedback to let you know that you’ve even encountered an object you can pick up. It will just sit there. The only reason I knew at this point that I needed that object was because I had picked it up in my previous playthrough. But for someone who hasn’t, this could lead to them to either ignore the object altogether or think they need to do something special to get it. It’s just one of many baffling things in this game that makes me think no one played it before shipping it. 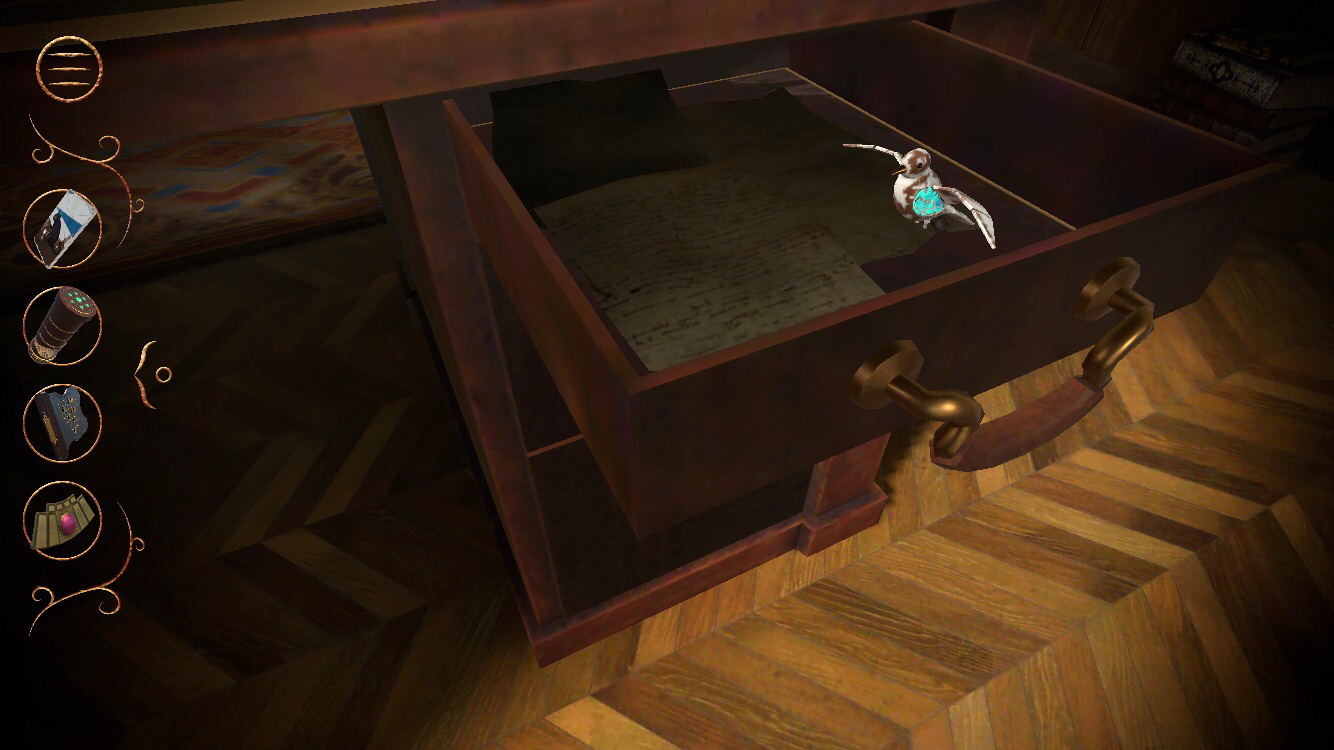 As much as I was hoping that Luna Strange would be the next great 3D room escape game, I can’t recommend it in its current state. Even if you do manage to get through the game without any problems, the puzzles are mostly generic and never all that exciting. The only thing it really has going for it is its graphics, and those can’t carry it past all the issues. And even though it’s cheap at only $0.99, there’s only one episode at the moment and it’s very short if you don’t waste time on all the extra nonsense. I’ll be keeping an eye out to see if it gets any much-needed updates, as these developers have updated their previous games when there were problems. Until then, though, Luna Strange is a game I’d steer clear of. But if you still want to try it despite my warnings, you can grab the game here.

And if you’re stuck, try my complete walkthrough guide.