French developer Accidental Queens have a history of making experimental games that both toy with unique mechanics and also try to tackle sensitive social issues and convey meaningful messages. Their first game, A Normal Lost Phone, had you going through the phone of a teen who’s struggling to find their place in the world. The spiritual sequel, Another Lost Phone: Laura’s Story, dealt with more adult — but no less important — topics that many people can relate to. Both games were of a serious tone, though, and their latest, Alt-Frequencies, is quite a big departure in that regard. It still touches upon social and political issues, but its overall concept is a silly one and it embraces that instead of fighting it.

In Alt-Frequencies, you live in a world not that different from our own, except for one glaring distinction — time loops. The populace is about to vote on whether to use time loops to improve economic stability as well as restore environmental damage. Yes, it’s a silly premise and I don’t think the game ever makes a convincing argument for the time loops. But that’s ok, because in the end it’s mainly an excuse for an innovative time-manipulating mechanic. You see, you’re already experiencing the time loop. The entire game takes place in front of a radio, and you get to change the stations. But unlike a normal radio station that keeps airing live content, these stations are on a loop. At some point, they fade out and restart back at the beginning. A few people are aware of this, but most are oblivious, merely speculating on the effects and possible uses of time loops. 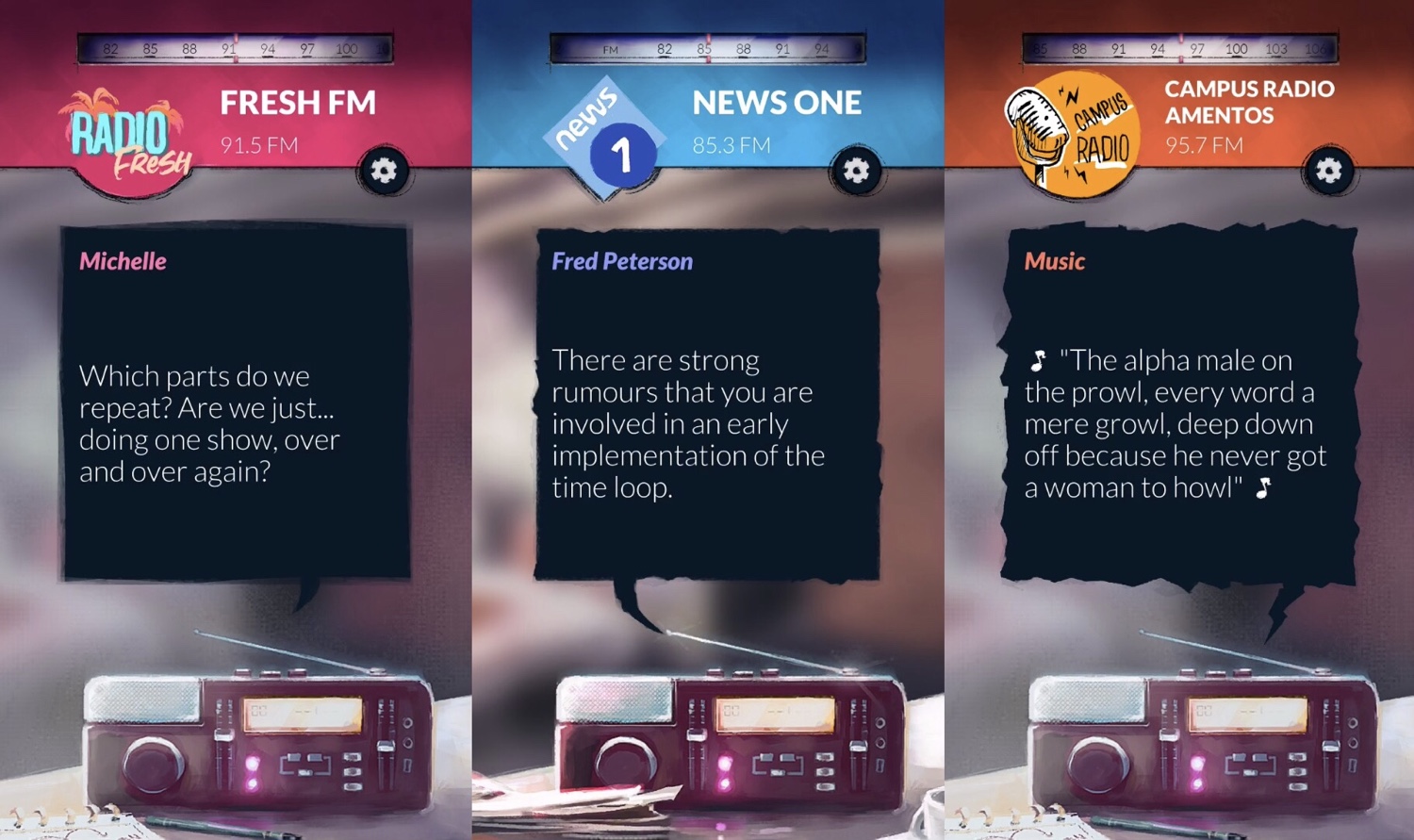 What this means for you is that you can copy parts of dialogue from one station and send it in to another station, hoping they’ll air it and change the rest of the broadcast. Since everything is looping, you can take your time and listen, then listen again, and then again until you find what you’re looking for. At first, you’re tasked with locating someone who “knows all the secrets.” You need to ask a certain person the right question by copying the question from one station and then sending it over to another. This will help you find a hidden frequency where the head of the resistance can share with you what they know about the time loop. Then you need to use the tools they give you to unscramble scrambled frequencies to find information that could prove the time loop has already been activated. Most of the game involves figuring out which snippet deserves to be heard and which radio station would be willing to air it. Sometimes there’s a chain of events you need to pull off in order to unlock the message you need. It all feels very puzzly, and I had a great time figuring it all out. 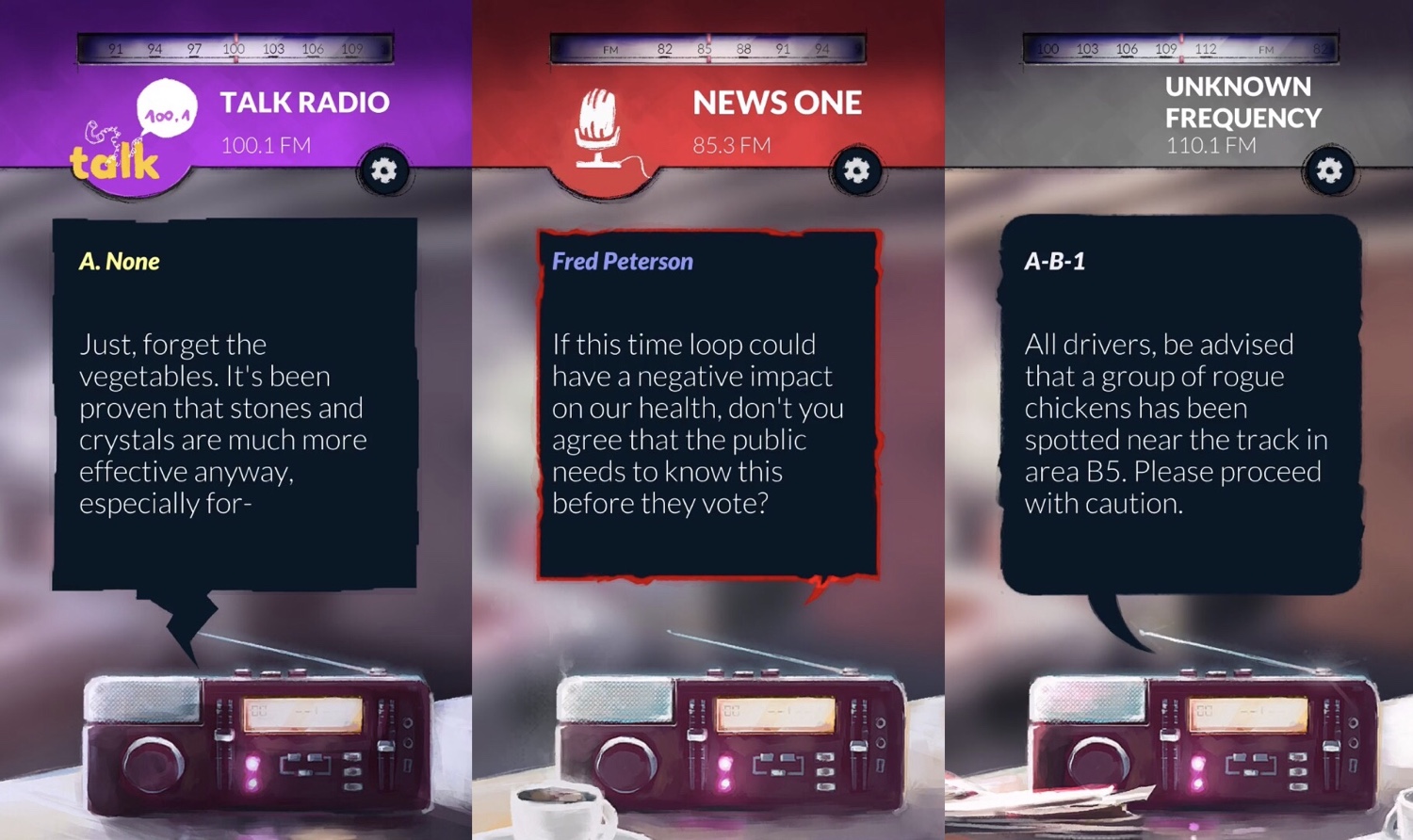 Controls in Alt-Frequencies are gesture-based — though onscreen buttons are also an option — and easy to get a handle on pretty quickly. You swipe left and right to change stations, swipe down to copy a snippet of text, and then swipe up to send the snippet to a station. If you want to fast-forward through some text to get to what you need, you simply double-tap. Only one snippet can be copied at a time, so it’s basically like the copy/paste function on any digital device. I quickly got used to the controls, and especially appreciated the skip function. It meant that being stuck was rarely frustrating, because it’s quick and easy to scan through everything to find what you might have missed, or because you just realized what you need.

There are also some other accessibility options that I didn’t try using because I don’t personally need them, but it was nice to see them included. You can turn on closed captions that make it easier to play without any sound, or the screen reader to make it possible to play without any reading at all. If you don’t have any trouble seeing or hearing, though, I highly suggest keeping on both the sound and text, as they complement each other. 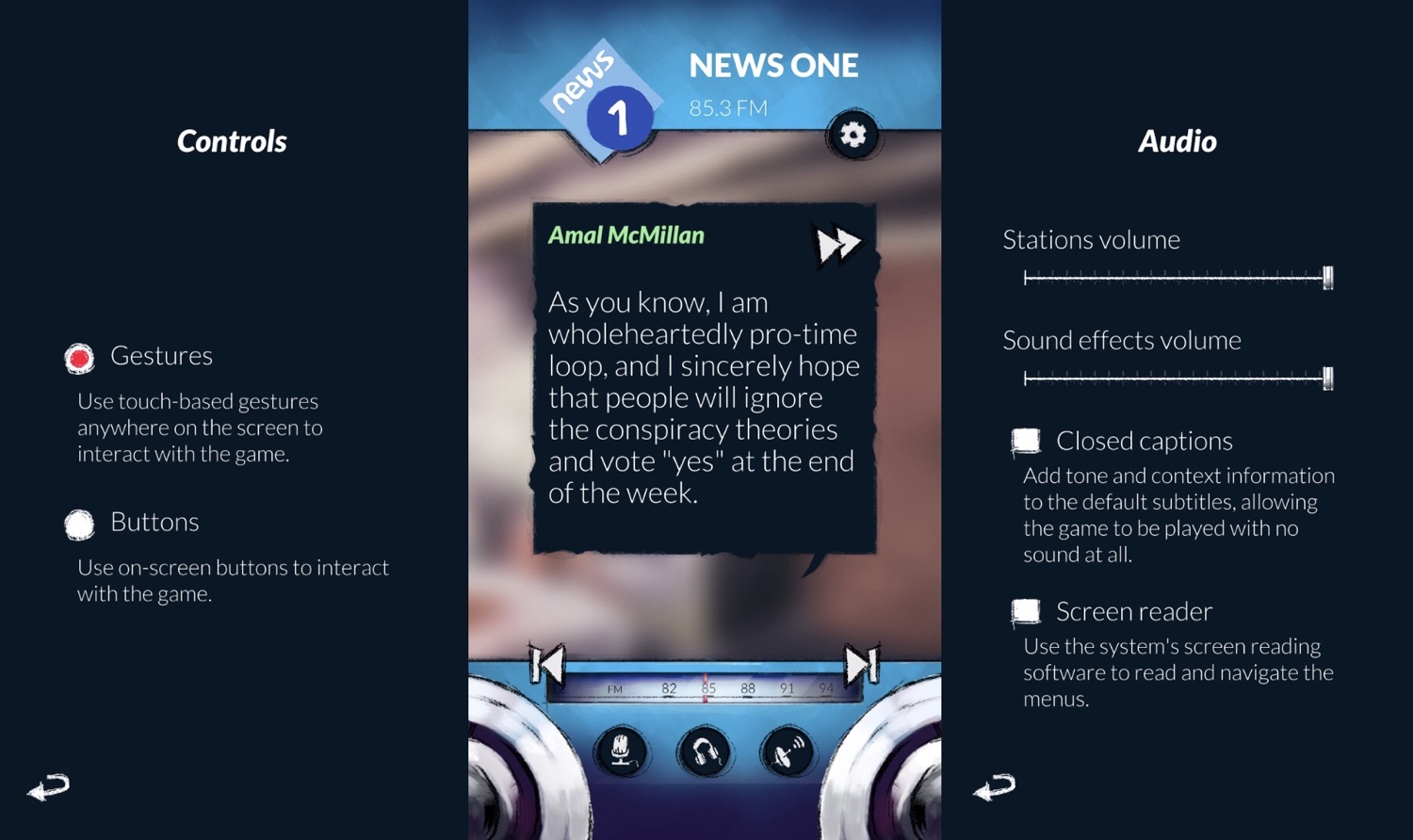 This is a narrative experience, so the entire game is made up of dialogue that’s all fully voice acted with a cast of over twenty actors. Some are exactly what you’d expect, while others are quirkier. You have the proper news anchor who takes his job seriously, the talk show host with an attitude, and the over-the-top caricature of a ditzy music station duo who both can’t be bothered to think much about serious topics. My favorite character was Ennis B. As much as I hate listening to real talk radio, I might listen to him if he actually existed. Like I said, the game doesn’t take itself too seriously and fully embraces the ridiculousness of the whole idea. So there are jokes about repeating yourself, weird stories about chickens, dogs answering callers’ questions, and of course a conspiracy theorist.

One thing that has always fascinated me about Accidental Queens is that all their games have a full soundtrack of original pop songs. I don’t know if they’re a band that wants to be a game developer or a game developer that wants to be a band. In any case, it certainly works well in a game made entirely of radio clips. Some of the songs also have relevant lyrics or are even part of the puzzles. Overall, they helped make the game more immersive. 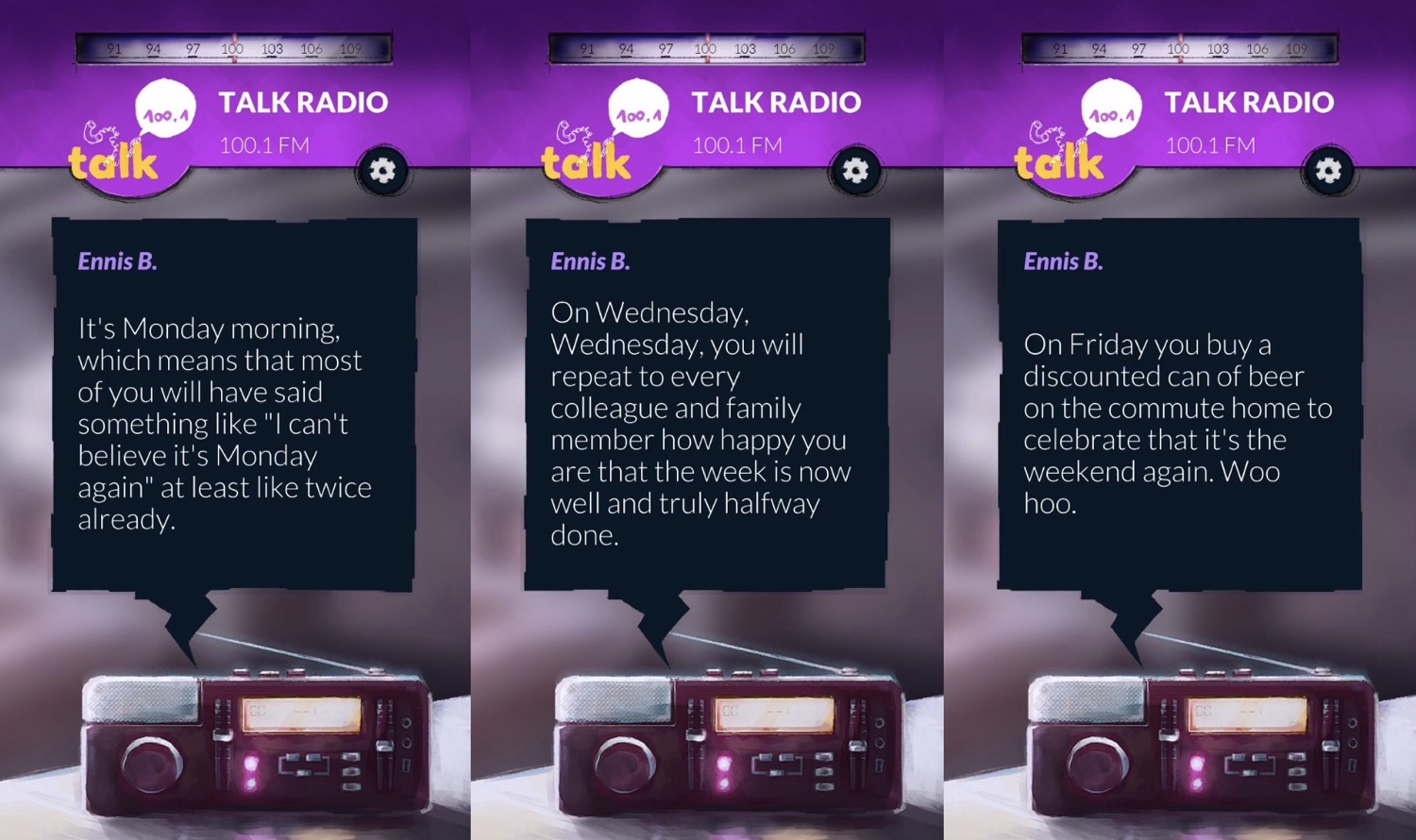 Alt-Frequencies consists of five chapters and only takes a few hours to play through the first time if you listen to everything carefully. But, as with any good narrative game, there are decisions you make that change aspects of the story. These branching paths mean there’s good replay value and reason to play more than once. I was surprised how many things changed in the later part of the game based on earlier decisions. And the developers respect your time, as not only can you fast forward through all the text, but you can even replay any chapter once you’ve completed it. So instead of having to restart the whole game to look for achievements you missed or to try out different paths, you can jump around as much as you want. This is rarer than you’d think for narrative game with branching storylines, and I can’t tell you how much I appreciate it.

Personally, I enjoyed hunting the achievements more than anything, as they felt the most puzzly and often unlocked the most entertaining sound bites. Because of this, I wish the game included a link to the achievements in the pause menu, instead of only in the main menu. While the game is supposed to save mid-chapter, it never did for me. So leaving the game to look at the achievements list and see if I managed to unlock any would have wasted a lot of time and effort. Instead, I had to keep the achievements list open on my iPad to check if I received any while I played on my iPhone. It was worth the effort, though, and I’m glad I didn’t ignore them because of the extra inconvenience. Hopefully something can be done in an update to make the achievement hunting as user-friendly as the rest of the game.

There are a lot of memorable moments in Alt-Frequencies and I had a ton of fun playing through it. That said, I wish the final choice you make and the ending would have been more satisfying, as it felt a bit anti-climactic. I would have liked to see two different endings depending on what you decided, perhaps even a bit more to the story. I also wouldn’t have minded a more satisfying explanation for the time loops, but its overall silliness makes that less of an issue. In the end, I’m glad to see studios experimenting with new ideas instead of always playing it safe. Even if the game might not have reached its full potential, there’s enough here to make it very much worth playing. The main mechanic allows for some interesting puzzles and you can also tell everyone working on it had fun. If you’re looking for a new, unique narrative game to play, Alt-Frequencies will scratch that itch and then some. So grab the game here and experience the time loop for yourself. And if you get stuck anywhere, try my walkthrough guide.

Interview: How ‘Linelight’ Was Adapted For Mobile