I first mentioned Filip Loster’s card-based puzzler, Unhatched, several weeks back in my preview, and have since had a chance to play through the whole game. It’s a bit of a cross between Reigns and Meteorfall, but with its own unique story and mechanics. What really sets it apart, though, is that each card battle is a hand-crafted puzzle with a solution. Instead of the cards being randomized, you choose the order and then draw one card at a time in that order. Each card offers binary choices, and each battle requires a different strategy. So you’re constantly learning and changing things up. I thoroughly enjoyed my time with Unhatched, but should mention that it ends on a bit of a cliffhanger.

At the beginning of the game, you find yourself locked in a cell. A stranger offers to free you, but makes you his errand boy — or girl — under threat of sending you back to prison. The ultimate goal is to rob a safe for him, but you’ll encounter all sorts of curious characters along your journey, many of them asking for their own favors. They could be as simple as opening a jar of pickles, or being a unicorn’s muse. There’s also a strange mask that acts as your teacher, offering helpful hints but also making demands that you pass his tests. Meanwhile, you got a dragon egg somehow and end up a dragon tamer after it hatches. There’s quite a lot going on, and I was a bit disappointed that the game ends before the story fully plays out. You’re left with a “To Be Continued” and lots of questions. That said, the journey was entertaining, so I’m eager to see the rest of it. The developer has said that he’s written the next part of the story but the artwork isn’t done yet. As for the card battles themselves, this is how they work. The goal of each battle is to whittle down your enemy’s health points to zero before they do the same to you. At the start of each battle, you’re presented with your inventory in the form of cards. Each item takes on the form of a stack of two cards. You can only take three stacks in with you, but you can choose the order of those three stacks. The result is that you’re technically choosing the order of all six cards, but numbers 1 and 4, 2 and 5, and 3 and 6 are tied together. Each card has two different options when you draw it. For instance, handcuffs might give you the choice between earning one mana point or drawing another card. Certain actions require mana, but if you waste too much time earning more mana than you need, it might give your opponent the opening he needs to defeat you.

Some cards have swords on them that allow you to attack for one, two or three points. Other cards come in blue or red, and part of the strategy is using another card to pull that color to the top of the deck. You might also need to destroy your opponent’s cards in order to survive. Later on, things get even more interesting when you start the battle without any attack cards and have to start working out the uses of different items like shoes or money bags. The game does include pretty helpful tips for a good chunk of the story, but eventually you’ll be left on your own to figure things out. Thankfully, you can pause a battle and restart if you see you’re losing. I really appreciated that, because I learned a lot just by seeing the kind of deck I was up against. While this does mean the game is on the easier side, I liked its forgiving nature that allowed me experiment and take risks without fear of messing up permanently. You can even restart an entire chapter if you lose a battle and aren’t happy about it, and at one point may even be forced to do so if you made a poor choice. 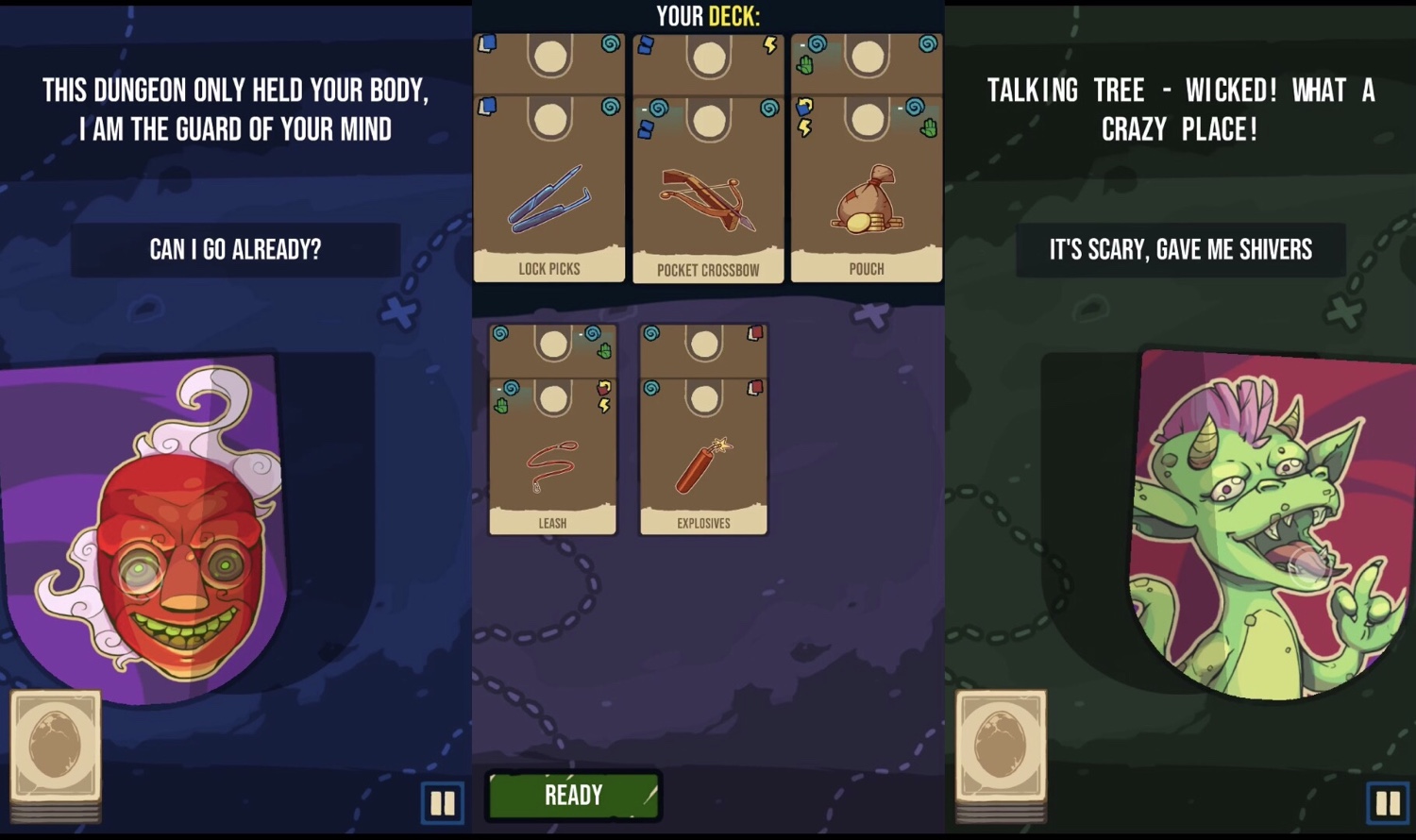 As you progress through the story, you’ll earn more items in the form of cards. But this is not quite a deck-building game. To keep things simplified, you never have more than five stacks to choose from. Still, there’s a lot of strategy in deciding which cards to take and which to leave out. I’d sometimes have to restart and change my both my card choices and the order based on my opponent’s cards. For instance, if they can destroy your red cards, you might want to take the blue cards with you instead. There’s a lot of interesting mechanics to play with, and part of me does wish there was also a randomized endless mode where you need to try and survive a gauntlet of enemies. But as a handcrafted puzzle game, it works really well and I’m eager to see where the rest of it goes.

Unhatched does a great job taking the Tinder-like formula and making it its own. I especially liked how things evolved later in the game, and a certain chase scene changed up the pace a bit and got my heart racing. There’s so much to like about the game, but I would be lying if I said I wasn’t disappointed when it ended so soon. I was just getting into both the gameplay and the story and it was over in under two hours. You might even say it’s still in the incubation period. I do think it’s very much worth the price of admission, especially since the rest of the game will be included for free. But it’s best to go in knowing it’s not the complete game yet and keep your expectations in check. I’m excited to see what’s next for my mysterious dragon tamer and I hope I won’t have to wait too long to find out. If you don’t mind waiting along with me, grab Unhatched here and see whether you make a decent thief.

My Week Unwrapped: June 4, 2021 – Overboard!, The Dark Side of the Moon, AE Psychic Squad, flocks, Psychofunk and More