There are few things in this world that get me as excited as a new game from Czech developer Amanita Design. Ever since I played Samorost 3 and Botanicula, I’ve been eagerly awaiting anything they announce. They have a knack for combining unique artwork with quirky characters, playful mechanics and clever puzzles. One thing you can be sure of with an Amanita game is that it will be wholly original and full of surprises. That’s no different for their latest release, Pilgrims. Out of roughly forty Apple Arcade games I’ve tried so far, it’s easily in my top three, if not my absolute favorite. It takes the playfulness of CHUCHEL and turns it all the way up to ten. I enjoyed it so much that I decided to write my first proper review of an Apple Arcade game. So continue reading to find out what’s so great about it.

My favorite puzzle in Samorost 3 was a card game early on, in which you need to arrange some cards so that a scene could play out. There might be some hunters, a lake, a woolly mammoth, a fire and a deer, and you need to figure out which order to place the cards in so the hunters can successfully kill the deer. And then work out how to get them to cook it. There’s some trial and error involved, but also logic. And when you get it wrong, it’s still entertaining because something silly happens. In fact, the best adventure games reward players by making it fun to try all options just to see the results. And that’s the main idea behind Pilgrims. It’s like they took my favorite Samorost 3 puzzle and expanded it into a full game. While it is short, the goal is not simply to complete it, but to find all the different ways characters and items can interact. There are also multiple ways to solve puzzles. I’ve uncovered almost all forty-five achievements by now and just about every single one put a huge smile on my face. 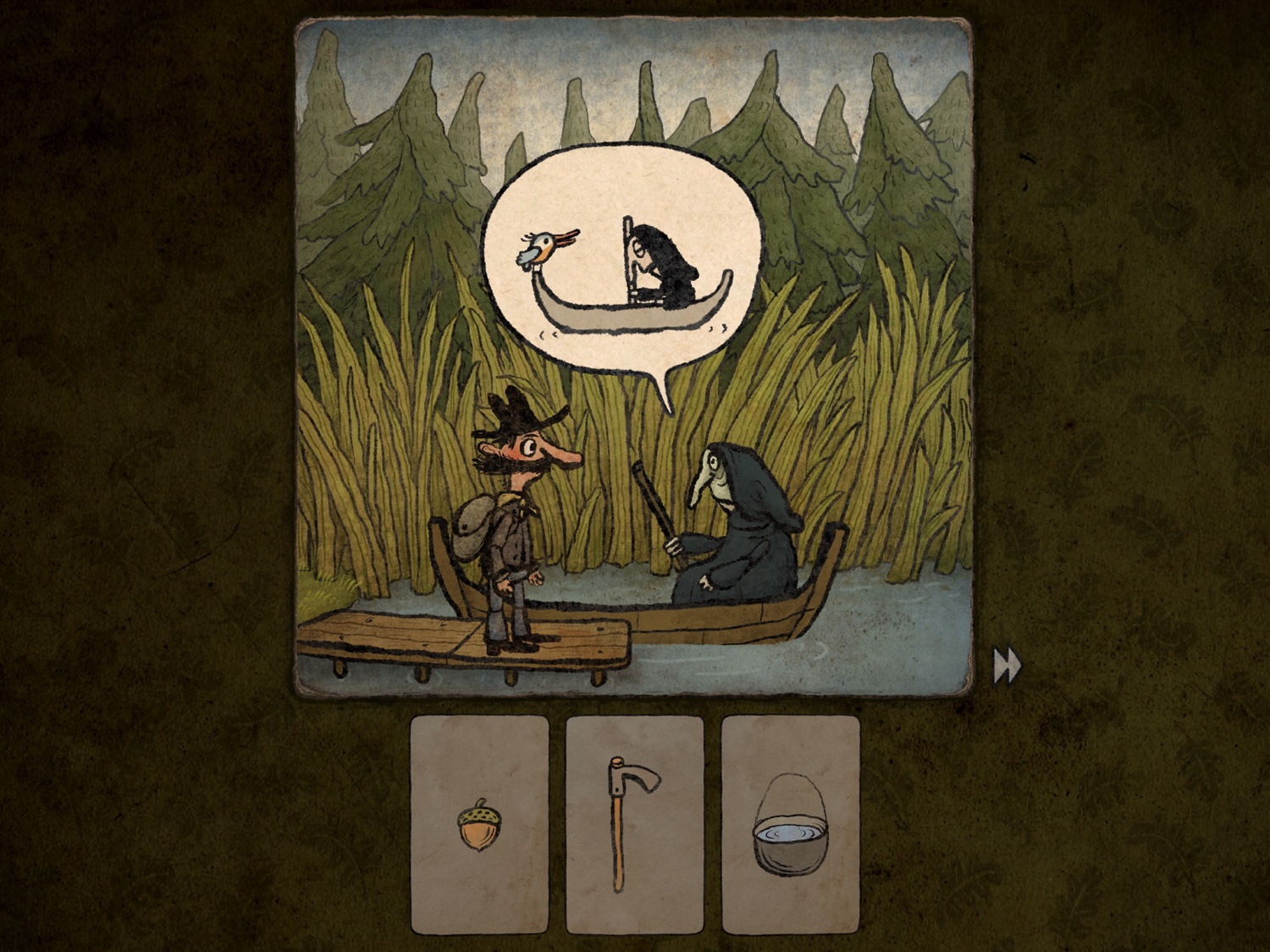 The way it works is that any characters or items you pick up on your journey get added to your deck of cards. You then tap on a location on the map to go there and can pull out a character from your deck and drag it to the screen. Characters you meet will react differently to who you put in front of them, and items you drag to the screen also have different uses depending on who’s wielding it. For instance, a broom might be used to sweep up dust or to hit someone over the head. Devil’s choice of weapon is the rope, while Bandit’s is an acorn-shooting pistol. There are all sorts of foods you can cook up, and everyone you meet wants something from you. At times, they’ll tell you exactly what that is, but often you’ll have to figure it out yourself, like how to get the bear to let you into his cave. You might get punched in the face if he doesn’t like what you offer, but even that’s worth a good laugh. Some items can also be found over and over to be reused, allowing you a lot of freedom to experiment. I personally loved offering everyone I met a sip of water. 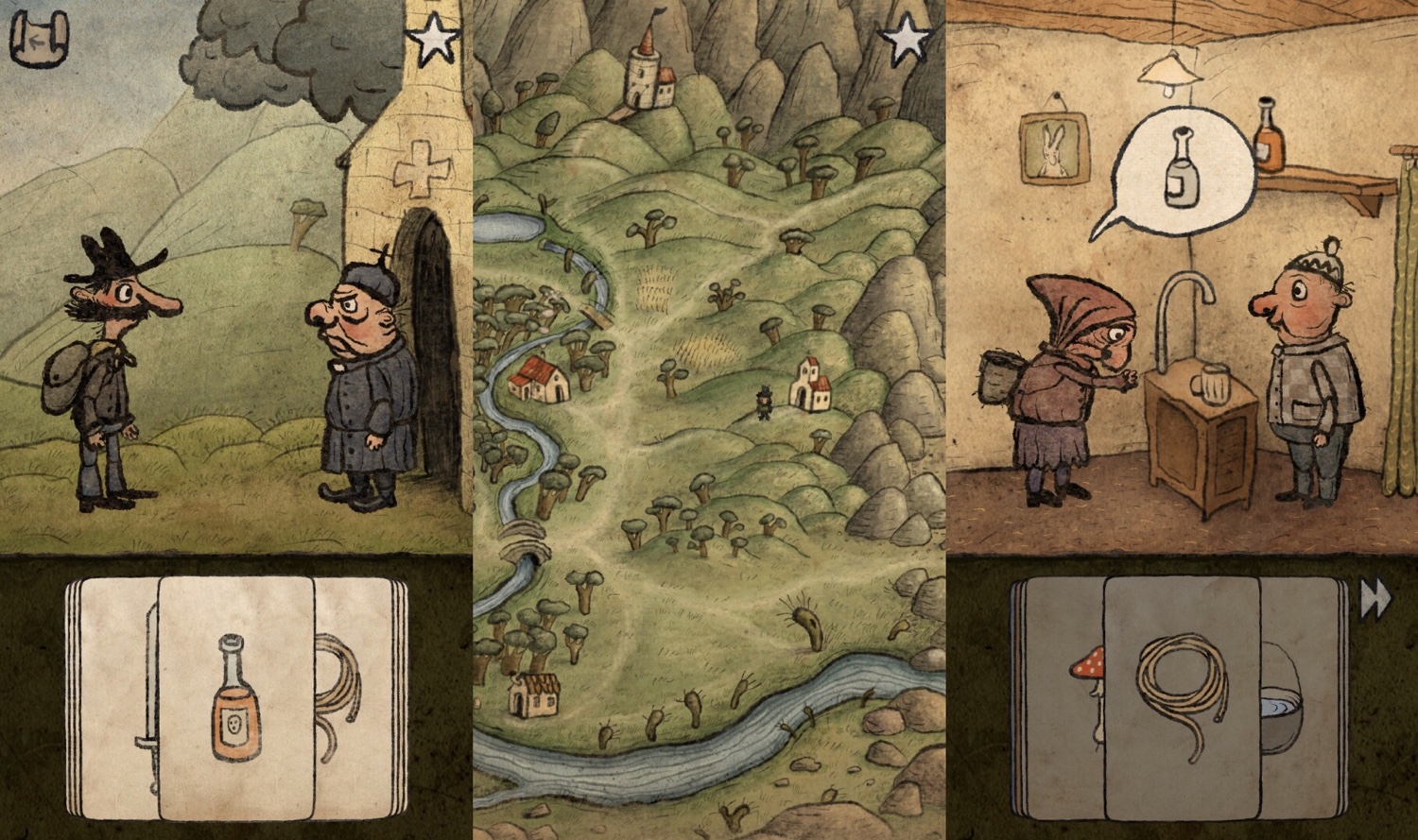 With the forty-five achievements to hunt down, you’ll have good reason to to replay the game and try new things. The first time I played, I went for the most obvious solutions and missed a lot of little details. So my second time around, I made sure to turn over every stone. Luckily, the achievement cards you haven’t earned yet can be flipped over to see a faded image to help you determine what the goal is to achieve it. Sometimes it might be more vague, like an image of a happy king. Others might be more obvious, like getting a character drunk — but it might still take some out-of-the-box thinking to get there. If you walk away from this game after one playthrough and only a few achievements, you’re robbing yourself of the bulk of the experience. Take your time with it and try to uncover all the little details to get the most out of Pilgrims.

Besides just being an incredibly charming and clever game, Amanita took care to make sure it’s mobile-friendly and feels great on all devices. You can double-tap on a location on the map to go there instantly instead if watching the group walk there. And if you’re achievement hunting, you don’t have to watch all the cutscenes play out again and again, as there’s a fast-forward button. Then there’s the layout. If you’re on an iPad, you get to spread out in landscape mode and see the entire map all at once, or flip to portrait mode to see each scene in a bit more detail. On iPhone it plays only in portrait mode so it’s one-handed and great for on-the-go short sessions. As with all Apple Arcade games, it also includes iCloud sync to carry your progress over to each device. I do wish it gave the option to wipe all progress, including achievements, though. But that’s really my only complaint with the game. 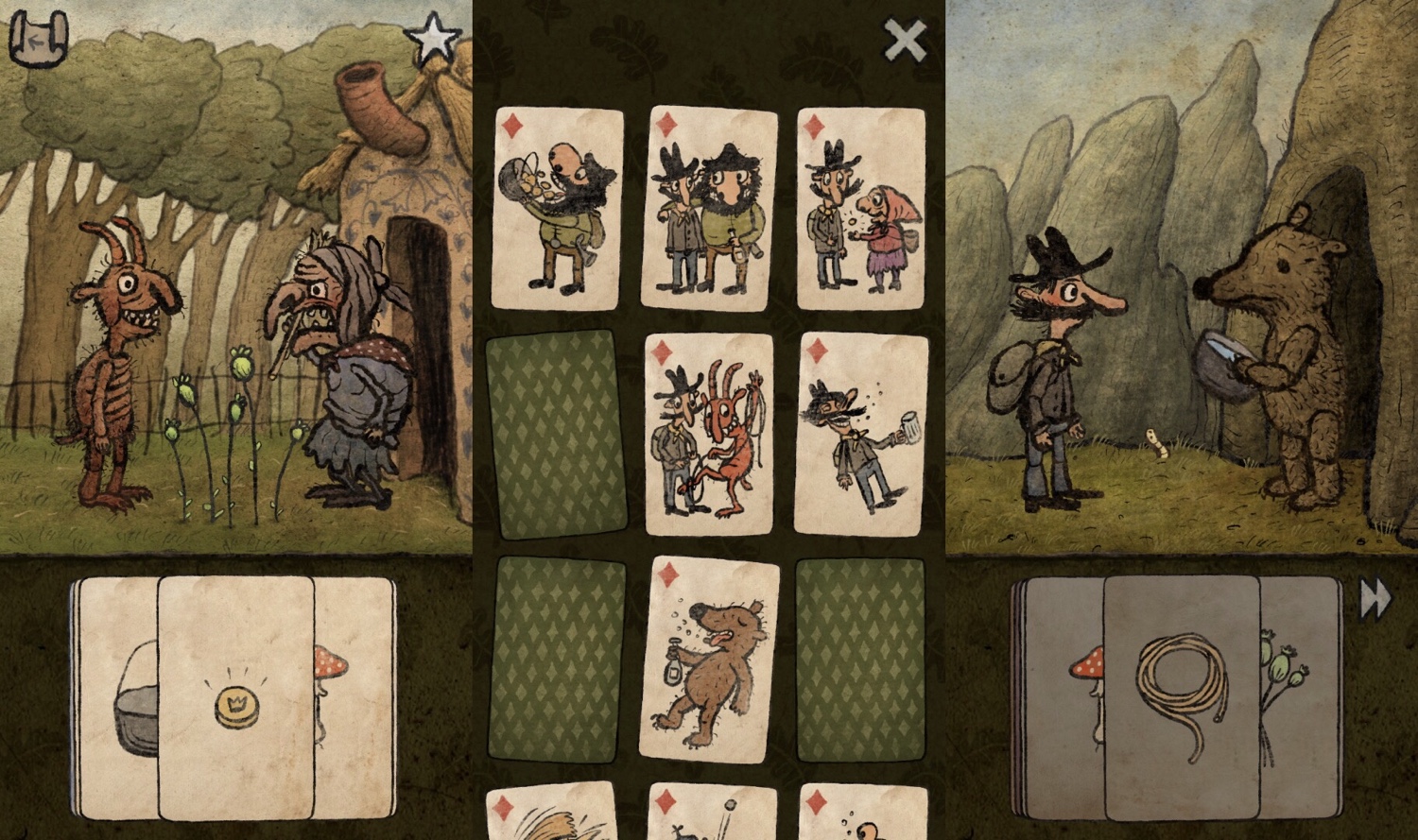 Pilgrims is, quite simply, a must-play adventure for anyone who values playfulness and silliness in their games. If the distinctive art style and music aren’t enough to pull you in, surely the characters’ antics will be. The interactions are often funny, sometimes heartwarming, and occasionally shocking. This is a game so full to the brim with character that it couldn’t have come from anywhere but the innovative minds of Amanita Design. You can download it right now as part of an Apple Arcade subscription or purchase it for $4.99 on PC. Whichever your preference, just make sure you play it.