UPDATE: The developers responded to my feedback and made the changes I requested. Here’s my review of the current version of the game.

reky is a new minimalistic puzzle game from beyondthosehills, the makers of The Minims. Each level has you controlling a little black dot and moving colored boxes around to create paths so you can get the dot to the exit. It’s visually striking, consisting of mostly black-and-white lines on colored backgrounds. One might even be reminded of M.C. Escher’s impossible landscapes. The presentation is impressive and, even though it treads some familiar territory, the mechanics are fresh and clever enough to make me want to stick with it. But when it comes to quality of life aspects, the game makes some odd choices that push me away. So rather than review the game at this point, I wanted to take this opportunity to discuss all the little issues that impede the experience but could be solved with some small changes.

First, let’s talk about how the game works. In each level, you control a little black dot. If you tap on a cube and there’s an unobstructed path to move there, it will do so automatically. If not, it will stay in place. You can also control colored cubes by swiping at them. If there’s room for them to move, they’ll slide in a specific direction a certain number of spaces. For instance, swiping a blue cube might make it slide up two spaces. You can’t control either the direction or the number of spaces, as it’s coded into that specific coat of paint. But if you swipe at it and don’t like where it moved to, you can swipe again to make it return to its original position. Now, here’s the where things get interesting. If you move the dot to a colored cube, you can tap again on that cube to absorb its color into the dot. The cube will now be white and stuck in its place. You can then land on another white cube and paint it that color so it will absorb its properties. The idea is to figure out which cubes to color and when, in order to create a path to the exit. You also need to make sure you don’t trap your dot on the wrong side of the screen, away from said path. 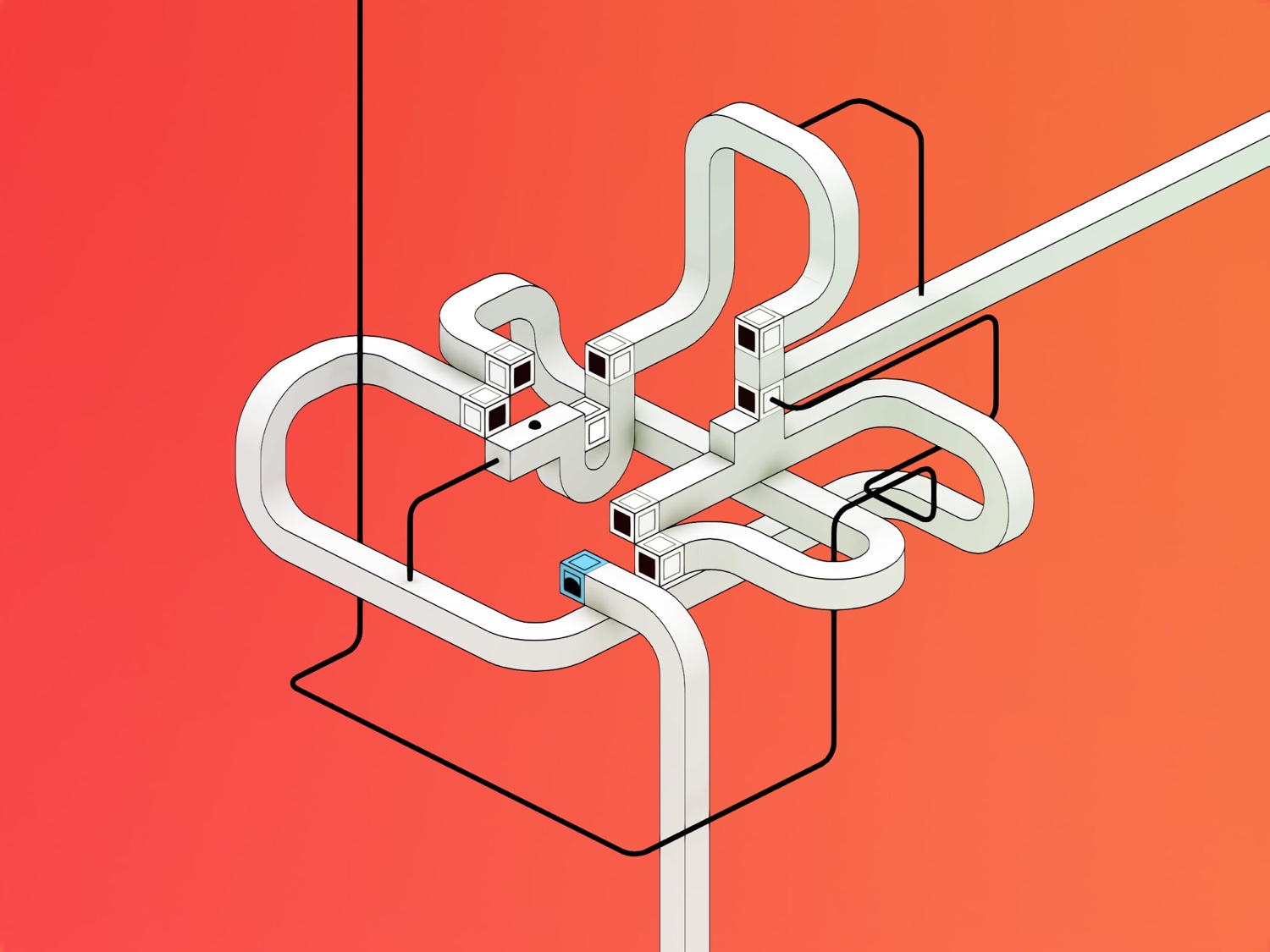 Avoiding mistakes is actually a huge part of the game, mainly because there isn’t any real way to fix most of them. If you move one space too far, sure, you can correct that easily. But it’s rarely so simple. An undo button sometimes appears in the upper right corner that lets you rewind one move, but that’s it. Usually by the time I realized my mistake, it’s too late for that to help me, so I have no choice but to restart the level. This is especially the case when a puzzle involves a wall of portals. There’s no way to tell where one leads until you go through it, so experimentation is a huge part of figuring out the solution. Due to the way the mechanics work, it’s possible to go through a portal and land on a cube with nowhere to go, or even to fall to your death. It also doesn’t help that the exit is barely distinguishable from the other portals. Being forced to restart due to these mechanics feels cheap and tedious enough that I wouldn’t fault someone for giving up on the game early on. It’s a shame, though, because there are some really clever puzzles here. 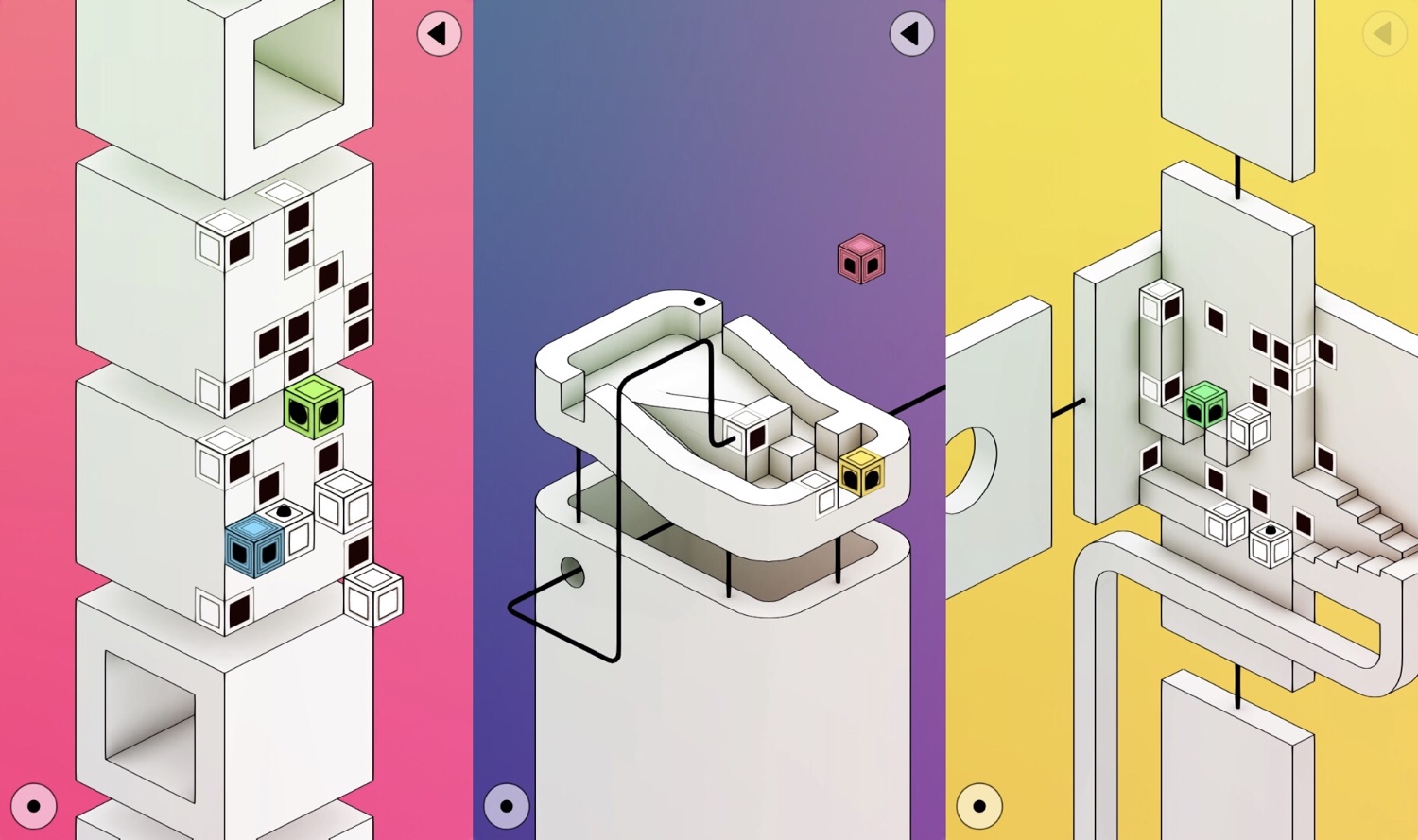 Besides the portals, another easy mistake to make is absorbing a color after moving it, realizing too late that you needed to move it back first. Remember, I mentioned that you can slide a cube back and forth. The reverse movement is often used as part of a puzzle, but only if you leave it as is and don’t mess with it. Once you absorbed it there’s no way to get the reverse movement back. You can paint that cube again, but now its starting position will be different than before. In most situations, the only way to fix that is — you guessed it — to restart. On top of that, the puzzle doesn’t always fit the screen on an iPhone in portrait mode, so you have to zoom out to see the rest. When you do that, it’s more likely your taps will register wrong and you’ll end up moving instead of absorbing a color, or vice versa. Considering how much experimentation the game requires, and how easy it is to mis-tap, it seems especially misguided to punish players for not being perfect. It’s incredibly easy to make a mistake you can’t recover from, forcing you to start over even if you were close to solving the puzzle. 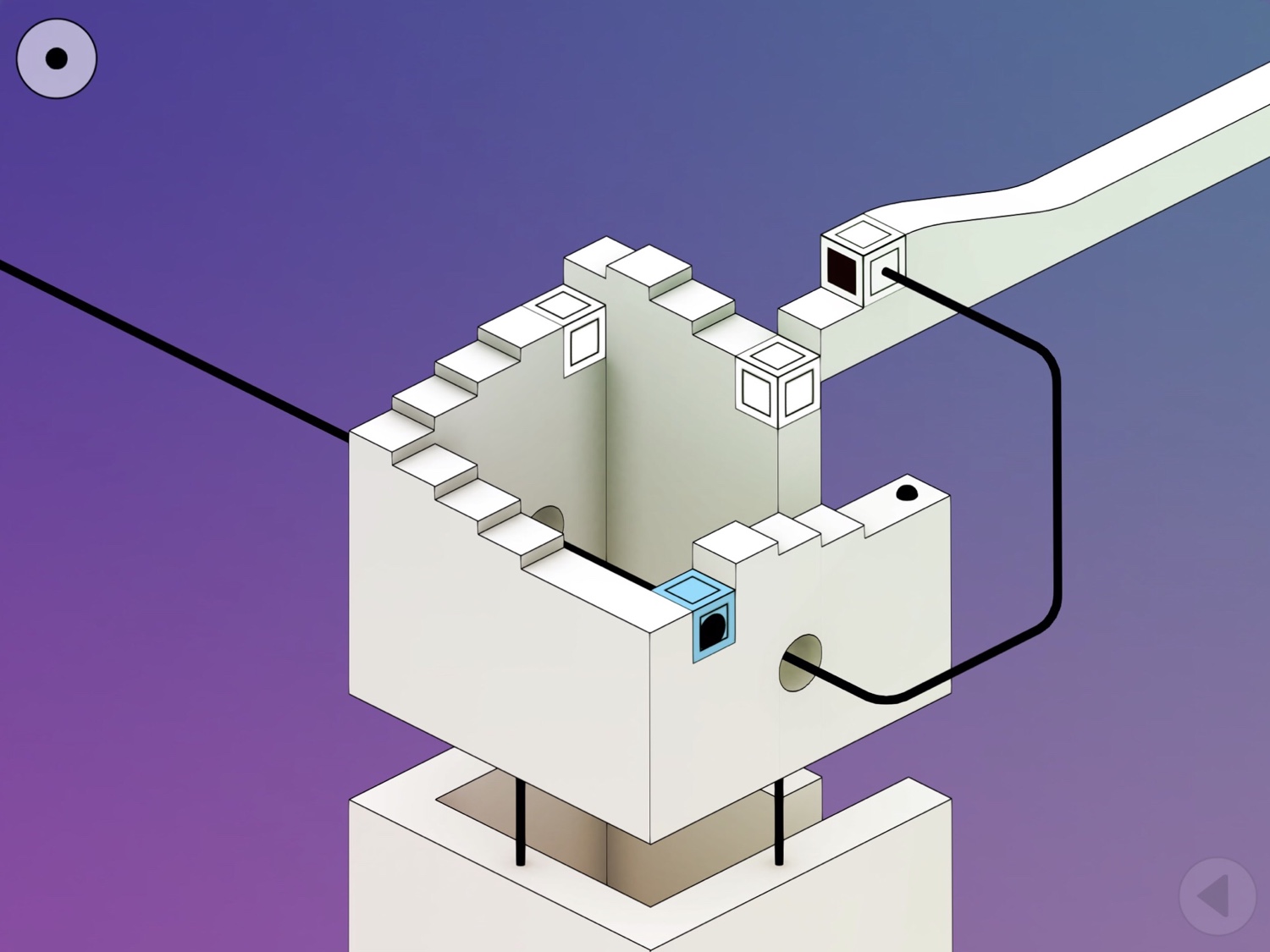 Another issue is the move counter. You can ignore it and just focus on completing the levels, but I find that hard to do. I want to achieve three stars for each puzzle. The problem is, the game doesn’t tell you how many moves are required for those three stars, so you only find out how you did when you complete it. Even if you want to try again, you’ll have remember what that number was, as it still won’t tell you. I’ve seen other games that want you to complete a puzzle before trying for the minimum moves and, even though I don’t agree with it, I can understand the intentions behind it. But I can’t wrap my head around the idea of grading players without telling them what the goal is. It’s already bad enough that it doesn’t show your move count while you’re playing, but to not even tell you the goal is just baffling. There’s no way to tell if you’re over the move limit and should restart rather than wasting your time completing it. This just adds to the tedium, and it’s so completely unnecessary. In all honesty, I’m not even sure the move counter and scoring system makes sense in a game like this, especially since the optimal solutions were found manually and it’s possible to find some better ones. The puzzles are tricky enough on their own that I think the scoring system could be removed without losing anything. 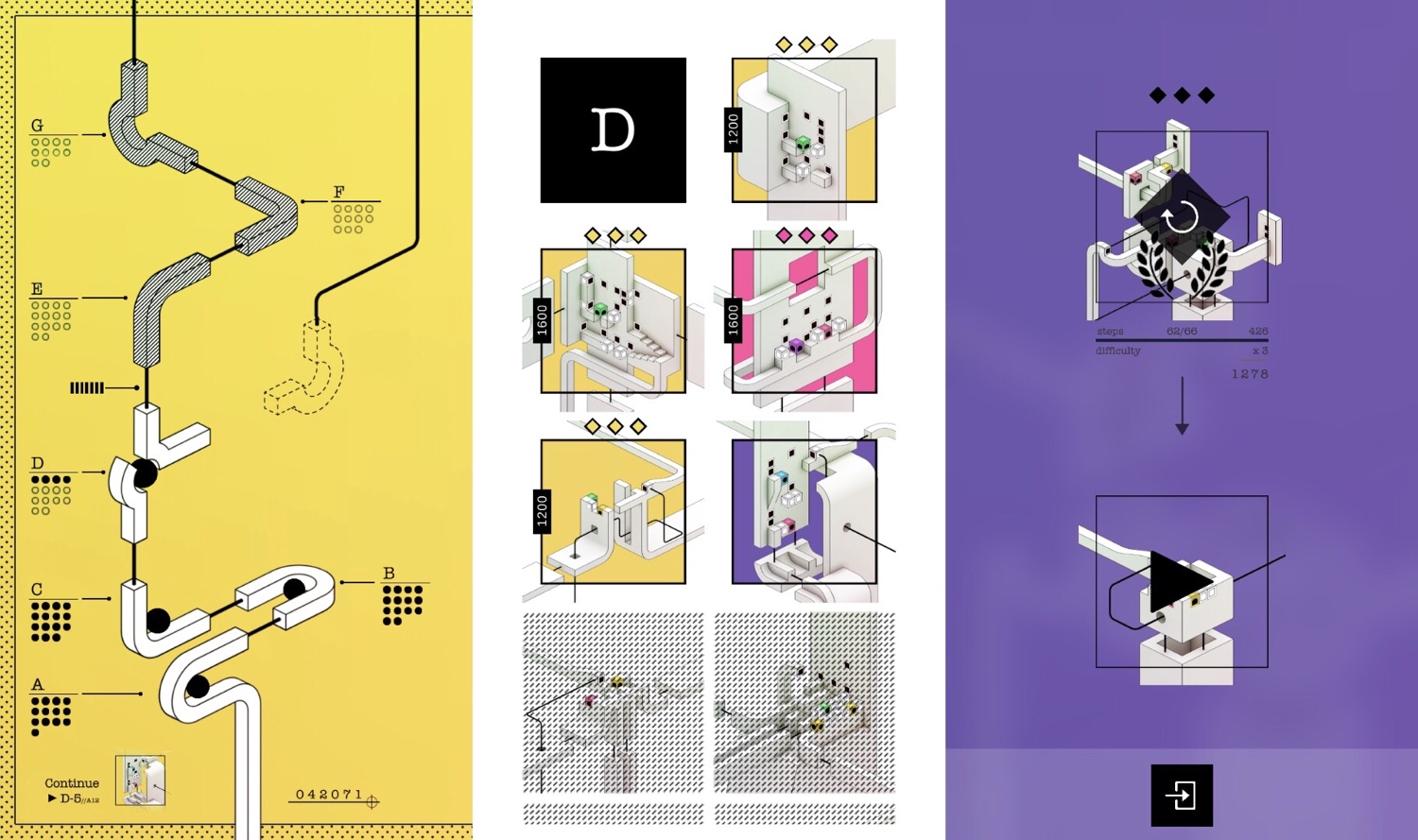 So to summarize, there are multiple issues that keep reky from being an accessible and easy-to-recommend puzzler. The most obvious is that it’s a game that relies heavily on experimentation but punishes you for any mistakes. It’s hard to keep track of where portals lead and the direction and number of spaces a cube will move with a specific coat of paint. Most of these issues can easily be solved, though, with an unlimited undo button. Even the three stars would be more fun to chase with a way to fix mistakes that didn’t involve starting over. reky does so much that I like, but it doesn’t have the confidence to trust in its puzzles, instead trying to increase the difficulty through forced restarts and memorization. The best puzzle games I’ve played allowed players to experiment without fear because they’re confident in the quality of their puzzles. I would love to see reky do the same and become the enjoyable experience that’s hiding behind all these unnecessary obstacles.

If you’re stuck, I started a walkthrough here.