If you play solitaire card games on your phone, you’re probably familiar with the works of Arnold Rauers, aka Tinytouchtales. They’re one-finger games that feel perfect for the platform, are easy to jump into, but involve a ton of deep strategy. My personal favorite is Miracle Merchant, mainly because it’s a pure high score chaser without any grinding. While his latest game, Maze Machina, isn’t a card game, it appeals to me in the same way. Each playthrough is self-contained, so you’re learning from each run and honing your skills, but you don’t have to worry about amassing any currency or filling your deck of cards. Together with charming artwork by Max Fiedler and an epic battle soundtrack by Oliver Salkic, you get the makings of a game that keeps begging to be played “one more time.”

First off, there’s the stamina. You have a limited amount, each move consumes some, and the game ends if you run out. There’s cheese on every third floor that replenishes some stamina, but first you have to get to it — and make sure the robots don’t destroy it first. On top of that, the floor tiles come in a large variety of weapons and tools. Besides the sword that does a basic attack, you have the shield that stuns or defends against some attacks. There’s the bow and arrow that only attacks from two or more spaces away. The lightning rod keeps the holder in place for one move and attacks a specific tile with lightning. There’s magic and grappling hooks and thief masks. You can even hide under a spiked trap and pull an enemy onto you, killing it and leaving you unharmed. And there are mystery tiles that wont reveal themselves unless you’re standing on them. Even though you’re looking at the same four-by-four board the whole time, things can get quite hectic, especially as more robots are added. 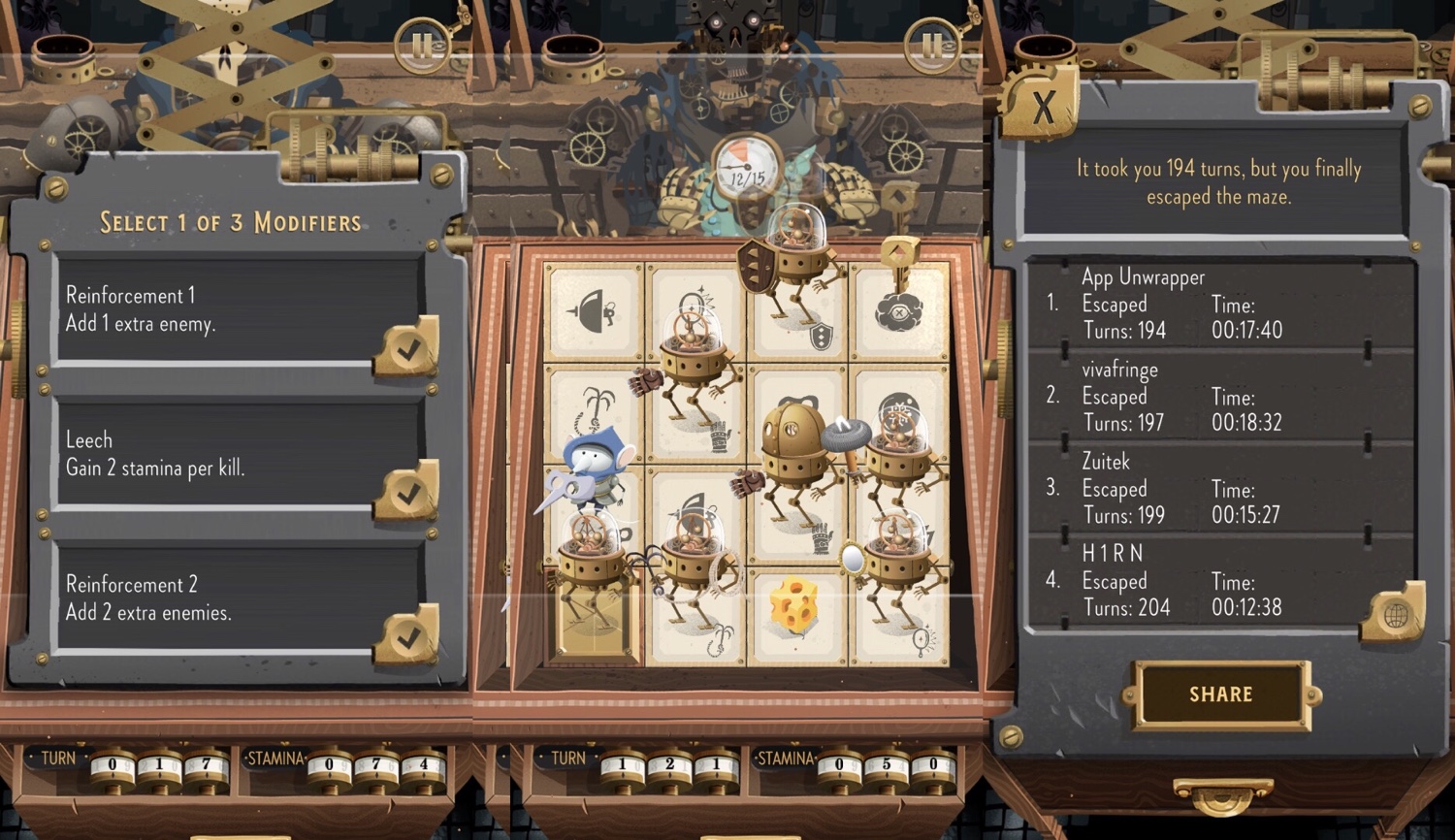 Luckily, you don’t have to predict on your own how a particular move will turn out. As with Threes!, you can swipe and hold to see the results and then release if you’re happy with it. If not, just move your finger back into place and try something else. That way you can easily tell if something will cause your death. It’s an important tool, since the weapons can set off a whole crazy chain of events. For instance, a mirror might reflect lightning back at its summoner, making space for a different enemy to teleport into. Or you might end up teleporting onto a bomb. But even with the look ahead, it’s easy to make mistakes. I’ve had some pretty surprising failures, like killing a cursed enemy and then accidentally pushing the key onto the leftover curse, thereby destroying it and ending the game. Or even pulling a cursed enemy on top of me to kill him with a trap, thereby transferring the curse to myself. It’s crazy out there! 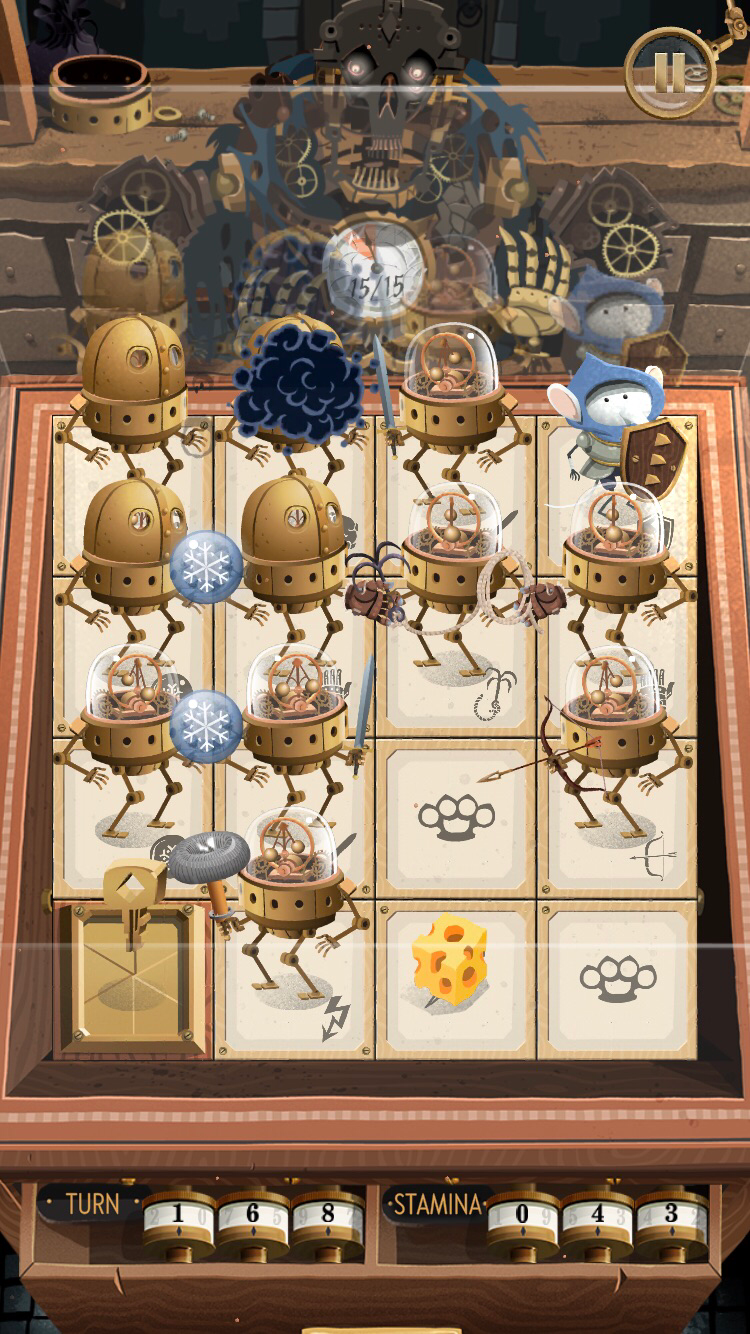 The Normal mode is pretty difficult, due to the limited stamina and lack of any sort of power-ups that might get you out of a jam. But there are several different modes, so if you find that you’re getting frustrated with dying constantly, you can hone your skills playing the easier Limit mode, which gives you unlimited stamina and 250 moves in which to complete the game. It’s good practice for the more difficult versions of the game, but it is still worthwhile on its own to compete with others by trying to get to a higher floor. There’s also a Draft mode, which has you choose from three different modifiers each time you collect cheese. These modifiers can be helpful — such as ten extra stamina per room or an extra cheese every five rooms. But they can also cause trouble, like give all enemies armor or consume stamina for every kill. So Draft is the most unpredictable version of the game, but arguably the most fun, too. Whichever you prefer, it’s nice to have multiple ways of playing to keep the game fresh. There’s even a daily challenge to keep you coming back each day.

Now, as much as I’ve been enjoying the game, there are a few improvements I’d like to see. Most importantly, I wouldn’t mind a setting to speed up animations. As nice as everything looks, once you’ve seen it a few dozen or a hundred times, it starts to feel like it’s just keeping you from the action. I want things to move a little faster once I’ve gotten the gist of it. Also, I noticed some weird stuff, like the counter on Limit mode stopping at level 15 even though you can continue past that floor. Your score will have the right number, so it’s not a huge problem. I’ve also noticed that sometimes the game might tell you you’ll die if you make a certain move, but it can be wrong. That makes it harder to decide on a move when you’re in a jam and all four directions seem to lead to death. It’s only happened occasionally, though, and you can still work out the math in your head if you want to be sure. Usually it happens when there’s a lot of stuff going on at once and it gets the order wrong. So just double check for yourself if all seems hopeless. Other than that, there’s really nothing to complain about. It’s a polished game and even has iCloud sync.

If you’re looking for a pure roguelike that’s accessible but still challenging, Maze Machina is an easy recommendation. Between the different gameplay modes and the high score chasing, you should have plenty to keep you occupied. There are so many variables that can turn the tide in a game, either for or against you. So even though it’s turn-based and relaxed, it can be quite tense. Even more so than with Threes!, you can’t play while distracted and expect to do well. It’s a game that demands your attention, but is still perfect for either long sessions or short on-the-go spurts. So download Maze Machina here and escape the labyrinth!