If you play mobile games, you’re probably familiar with at least one of Zach Gage’s works. My personal favorite is his word puzzler, Typeshift, but I’m also a fan of his Apple Arcade feature, Card of Darkness. Somehow, I never played the original SpellTower, which released back in 2011, even though it looked right up my alley. I was going to buy it later, but I wasn’t sure it held up on newer iOS versions and devices. But lucky for me, the new and improved SpellTower+ is out! I can’t compare it to the original, but what we got here is a word game that should fill all your word game needs.

For those of you unfamiliar with the game, let me explain how it works. It’s similar to a word search, where you’re shown a page full of letters and you need to find specific words by connecting them in a line. The main difference here is that you’re not given any words to find — it’s all on you to come up with them. Also, letters can connect in any which way, even criss-crossing. The in-game tutorial does a good job explaining it, so I won’t get into too much detail. But on top of that, you get bonus points for using a gold tile, blue tiles clear a whole line, and a word made of five or more letters will clear all the tiles touching them, as well. There are eleven different modes, but the common denominator among them all is that you want to make words that will score big points. This is a high score chaser at its core, and each mode has its own global leaderboard so you can compete with others around the world. 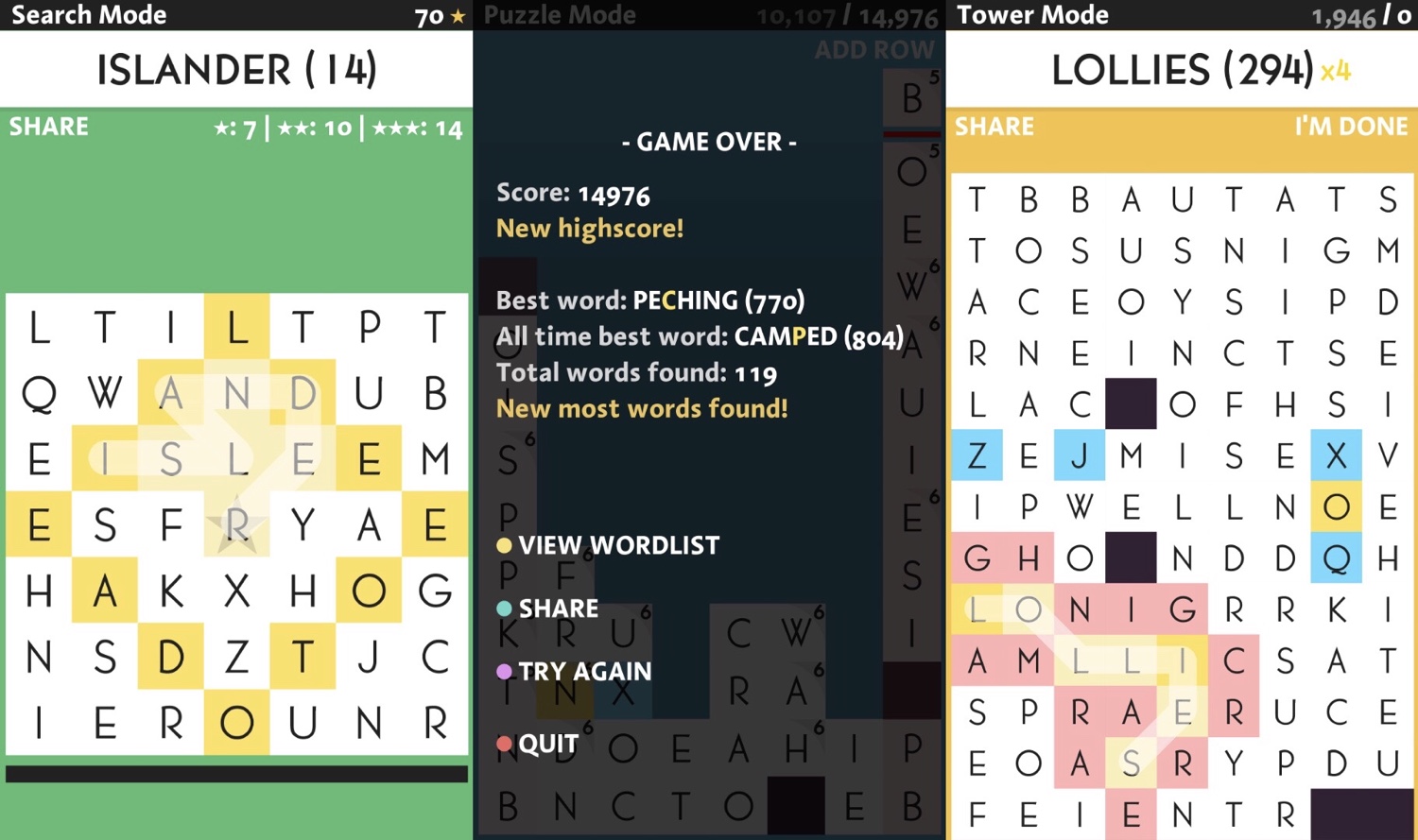 Five modes are included in the free version of the game, which is supported by pop-up ads. You get Tower, Puzzle, Rush, and two daily challenges. You can play those as much as you want without spending a penny, as long as you don’t mind the occasional ad. But if you want more, you can make a one-time in-app purchase of $4.99 to remove ads and unlock six more modes — Search, Zen, ExPuzzle, Double Puzzle, Bubble Puzzle and Blitz. While the basic Tower and Puzzle modes are the ones you’ll likely play the most, each of the others adds enough to make it worth playing when you’re in the mood for a change. You can even have multiple games going at once, as each mode has its own separate save slot.

My personal favorite is Puzzle Mode, which starts you off with five rows of letters. Each time you make a word, another row gets added to the bottom. The idea is to keep making words and increasing your score before any of the tiles reach the top of the screen. The catch is, after a while you’ll start getting letters with numbers on them. A numbered letter means you can only use it in a word that’s at least that long. So for instance, if there’s a 5 on an E tile, you can’t use that E in a four-letter word and instead have to find a longer word to use it with. If you make too many small words, your score might be too low by the time the 6’s make an appearance, and it will be harder to recover. There’s no timer, though, so you can take as long as you need to think of the best words. And if you find that too hard, there’s a Zen mode that does away with the numbered tiles. If you prefer more of a challenge, try your hand at Rush, which is the same as Puzzle but with a timer, or ExPuzzle, which has numbers that go all the way up to 8 instead of just 6. Whatever your preferred play style, there’s something here for you. 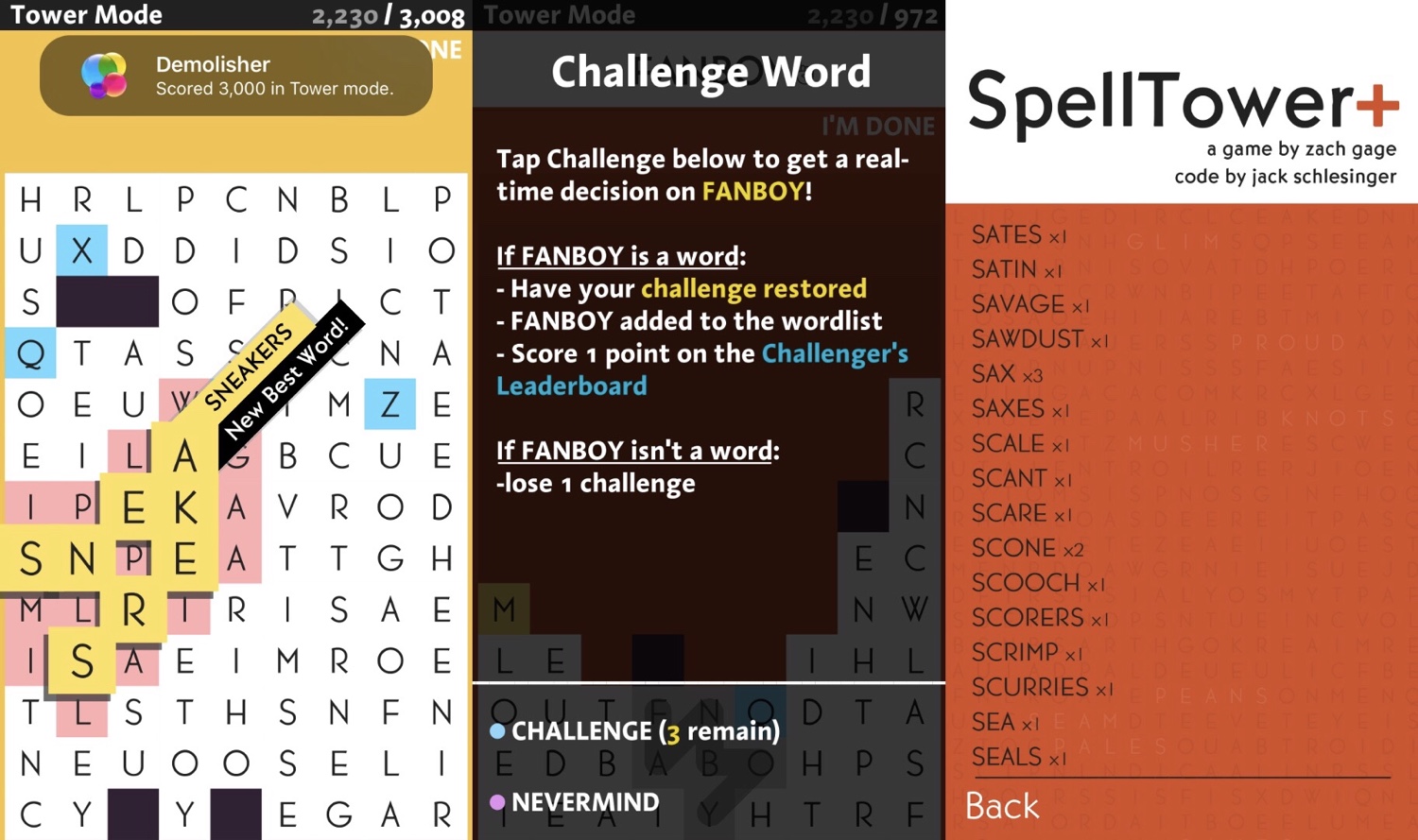 Another interesting feature is the ability to challenge a word. If you create a word that the game doesn’t recognize, just challenge it. If you’re right, you get a point added to your total of challenges won. If you’re wrong, you lose one of your three challenge points for the day. It’s surprisingly satisfying to win a challenge and then be able to use that word right away. That said, I’ve lost a few times with words that should have been accepted. But if you tell the developer about those, he’ll add them in an update. It’s not ideal, but I trust that over time these instances will become very rare.

Some other nice features that are included are iCloud sync, both landscape and portrait support on iPad, and dark mode. If you unlock the full game, you even get detailed statistics that include a list of all the words you’ve found. And for those who don’t like to be rushed, scores are uploaded mid-game. So if you have a good game going, you don’t have to finish it just to get your score to show on the leaderboards. For instance, I have a Zen game in progress that doesn’t seem to have an end in sight. But my 40,000+ score is already listed. All these little details show that SpellTower+ comes from someone who plays mobile games himself and knows what kinds of features to include. There are a few minor bugs, but I expect those to be fixed in due time and I wouldn’t let them stop you from playing — or buying the full game. 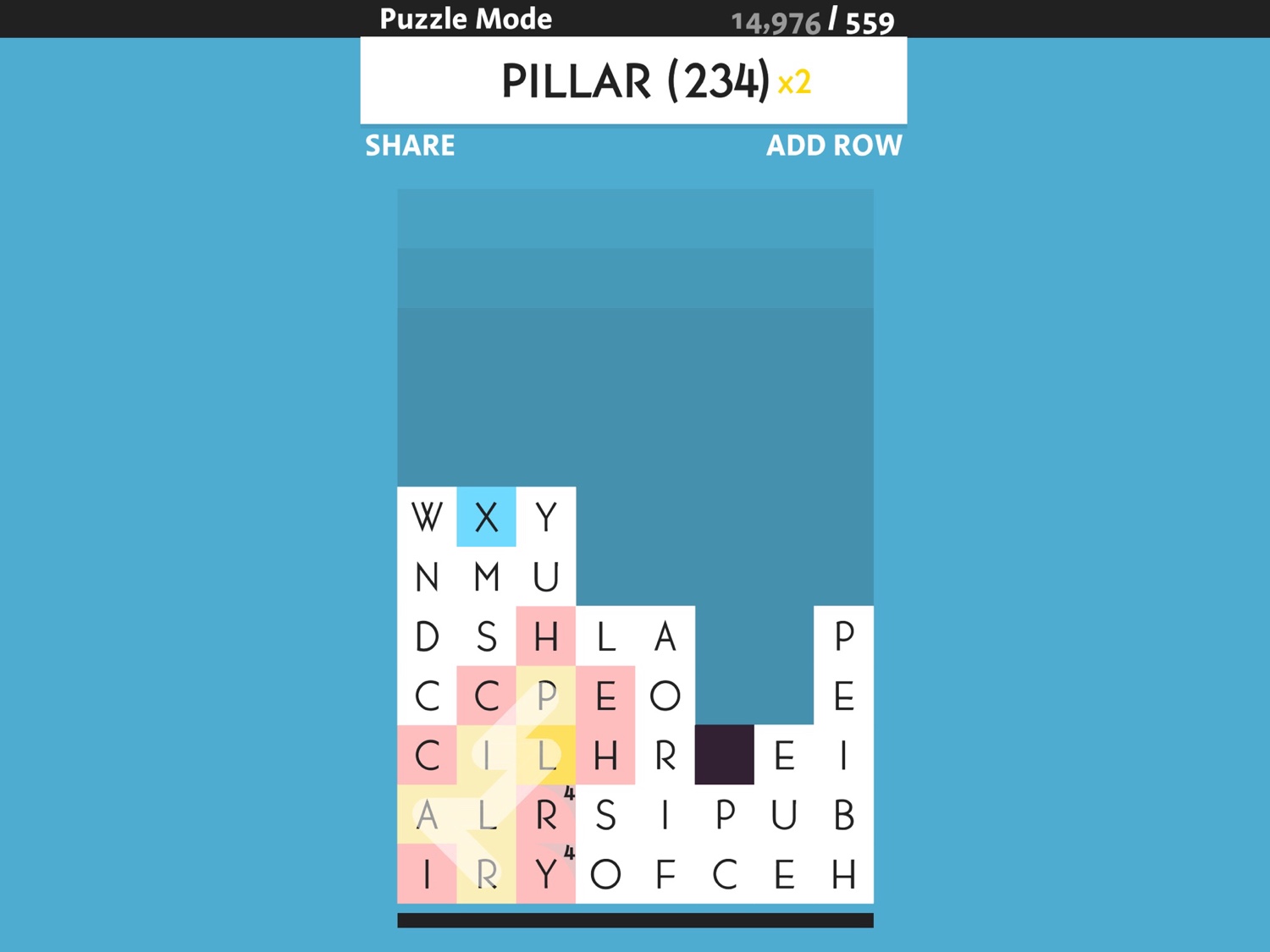 I know I’m nearly a decade late to the party, but I’m so glad I finally got to experience the magic of SpellTower+. It manages to hold up after all these years, perhaps in large part due to its simplicity. It doesn’t try to reinvent the wheel. The rules are simple, the different modes vary just enough to keep things from getting stale, and the randomized boards mean it will be a game that stays on my iPhone for a very long time. Best of all, outside of a few leaderboards and achievements, there’s no grind. You can’t stockpile currency or power-ups to give you a leg up. Whether you’re on your first game or your thousandth, you’re on equal footing with everyone else. It’s rare to find that these days, with game balance often skewed in order to make more profits — especially remakes. So to have a “pure” high score chaser re-release in 2020 without any watering down is something to get excited about. Whether you play for free or spend the $4.99 to unlock the full game, go grab SpellTower+ and become a master wordsmith.