I absolutely despise dating in real life, so it might make sense that I’m not really into dating games. That said, I’ve still given some a try, hoping I would like the writing and humor enough to overlook the genre. Unfortunately, they’ve all been either too wordy, too silly, or I just lost interest before getting very far. But it’s hard to ignore a game called Speed Dating for Ghosts, especially when it was releasing around Valentine’s Day on iOS. I can’t imagine a better way to celebrate such a silly holiday than play a game about dating in the afterlife. And I’m so glad I did, as it spoke to me on multiple levels. Copychaser Games’ Speed Dating for Ghosts is basically the dating game for people who usually hate dating games.

The game starts off as you might expect it. You sit at a table and are given a short time to chat to three different spirits. The ghosts come in all shapes and forms, from spooky to suave, shy, and sad. You might meet Gary, the scary-looking dude who could have come straight out of a horror movie, or Hattie, the sweet little old lady who resembles dust bunnies and hangs out in a nursing home to help the residents. After two rounds with each of them, your interest should be piqued enough to choose which one to go on a date with. But thankfully, these aren’t so much dates as outings. They usually choose the place to meet and then show you something that was meaningful to them in life, or perhaps related to their death. They might need to cut the date short due to some emergency, but you have the choice to go with them and lend a supportive hand. In many situations, you’ll be helping them find closure and move on with their afterlife. 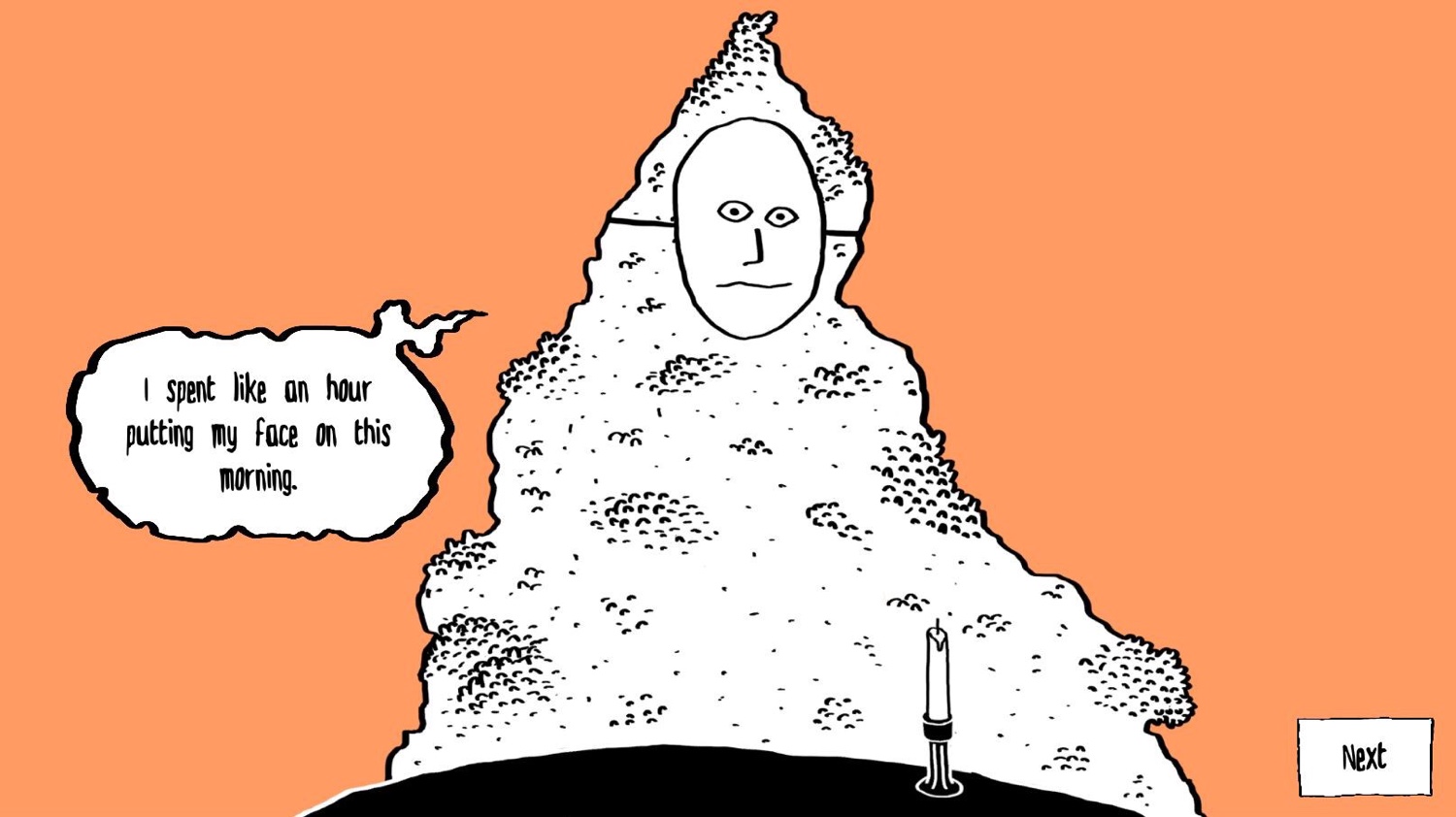 There isn’t much in the form of gameplay, so those who require some sort of challenge from their games should look elsewhere. But if you’re willing to spend some time with a well-written narrative experience, you’ve come to the right place. Each date moves briskly, as the dialogue is given in small chunks, and a tap anywhere on the screen speeds up the text or brings up the next part. At times, you make dialogue choices, and they could determine whether a ghost is willing to date you. I’m not sure how much they affect the dates themselves. But I did notice once that an action on one outing affected a date with another ghost, and I thought that was a nice little detail. I actually would have liked to see more of that, but the game is perfectly enjoyable as is. What makes it stand out is how each ghost is has complex emotions and is dealing with their death in different ways. Some have been around for centuries and learned to entertain themselves, while others are still coming to terms with being dead. You might even come across someone who’s died more than once! The variety of the personalities and their stories held my attention from beginning to end, in no small part thanks to the smart and streamlined writing.

One of the most moving stories for me was (spoiler warning!) that of the dog named Dave. When you meet him, he’s looking for a wisp, which is a piece of his owner that died along with him. It doesn’t talk but, its presence means a whole lot. The idea is that the wisp stays with him so that — hopefully after many more years of living — the owner can find him in the afterlife. As someone who’s had cats my entire life and was a mess after losing several — I just love that idea of each pet remembering the owner and holding a place for them so they can one day be reunited. I wasn’t expecting such a punch in the gut from this game, which manages to balance humor, wisdom and sadness so seamlessly. Oh and you can also pet the dog — but please ask for permission first!

Once you’ve dated a ghost, they’re added to the graveyard, where you can read a description of their life and death, as well as replay the date and see if you can make it go a different way. If you insult any of the ghosts and miss out on dating them, though, you’ll have to wipe your progress and start a new game to try and convince them again. It’s not hard, but it usually means showing interest in their hobbies even if you rather not. Also, I missed out on a lot of extra content because I didn’t realize that leaving the room would prevent me from coming back. It would have been nice to have some warning. Still, these are minor complaints, especially since it’s fairly easy to catch up again by quickly tapping through dialogue. So don’t let these criticisms keep you from buying the game. Also, I should mention that the Steam achievements are not in the current iOS version, but they’re planned for an update.

I wasn’t really sure what to expect from Speed Dating for Ghosts, but any concerns I had of it being “just another dating game” melted away after the first few seconds. This is a smart, heartfelt and progressive game about life and loss. It manages to say a lot without having to actually say a lot. And that also makes it the perfect game for someone who doesn’t have a lot of time to play games. You can easily complete a playthrough in a weekend, and the price of entry is low enough that the length shouldn’t be an issue at all. Unless you really hate reading, I can’t think of a reason not to play. So grab Speed Dating for Ghosts and find purpose in the afterlife.