I’ve been looking forward to FaceIT’s and Noodlecake’s Summer Catchers for quite some time now. It was originally designed for mobile, but sadly ended up getting released on other platforms first. But it’s finally here, and I’ve already spent a few hours with it. You play as a little girl named Chu who wants to get away from the cold and experience summer. With the help of some animal friends, she heads off in her little wooden car for a gorgeous — and dangerous — road trip. There’s a lot to like about it, but just as much that frustrates me. I still have a long way to go, but wanted to share my initial impressions since I have a lot to say about it.

For the most part, the game plays like an endless runner. But there are no scores, and instead you have specific goals to reach in each area before moving on to the next. You collect mushrooms by driving over them, and then use those mushrooms to buy tools, such as Bumpers, Jumpers, and Boosters. Each tool is consumable and serves a different purpose. For instance, a bumper can be equipped at any point and will cushion your car as you ram through things like rocks and totem poles. A jumper sends your car up in the air and then it lands a few feet further ahead, which is great for getting over beds of spikes. A booster makes you go faster for a short period, say to get up a steep hill or over a bridge before it collapses. But it can also cause you trouble if you boost at the wrong time, like right before hitting some spiked tumbleweeds. Occasionally, the game will let you keep going even if you didn’t use the right tool, but usually you’ll crash and burn and end that run.

I really like the core gameplay of choosing the right tool at the right moment, as things can go fast and get pretty hectic. But what I don’t like is how you’re limited to only three tool slots at a time, and the game randomly assigns tools for those slots. Right now, I’m at the point in the game where I have four different tools available in the shop. So even if I stock up on all of them, I won’t have access to all of them at once. But it gets worse. The game can throw two jumpers at you and one booster while you’re waiting for a bumper or a propeller. You can try quickly using — and wasting — tools you don’t need to try to get the one you’re looking for in time. But that makes the game feel both very reliant on luck and also a huge grind. Since you end up wasting more tools than necessary, you have to earn back more mushrooms to replenish them. 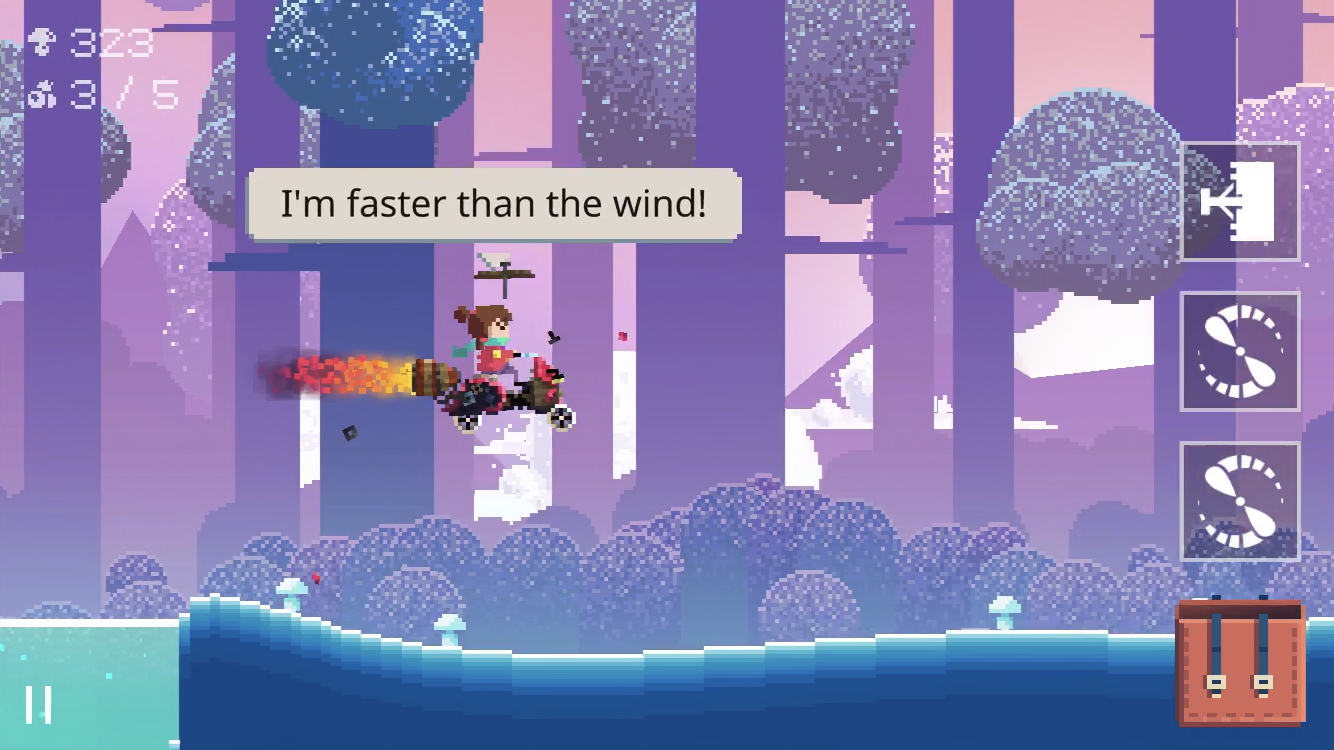 The game does allow you to swipe at a tool to change it to another random tool, but it’s still problematic. At first, I thought the swipe controls were buggy, as I was trying to change tools and nothing would happen. I later realized that there’s a pretty long cooldown timer anytime you use the ability to swap tools. So if you swipe and don’t get the tool you need, too bad! You have to wait before being able to swipe again. This all makes what should be a fun skill-based game feel way too dependent on luck. And it only gets worse when you take on tasks that require their own special tool. Let’s say you need to feed a carrot to a deer. You might pass a deer but have no carrot, or have a carrot taking up a precious slot while no deer show up for miles. So you’re reliant on random luck with the obstacles, the tools, and even the missions. And the further I get in the game, the worse the grind seems to be, mainly due to spending more time off the ground and dealing with more frequent obstacles. I took my time in the third area trying to build up my mushroom stores but I kept ending up back close to where I started. It seems the only real way to avoid wasting too much on tools is to let yourself crash the second you need anything that costs more than a few mushrooms. And that’s just no fun. 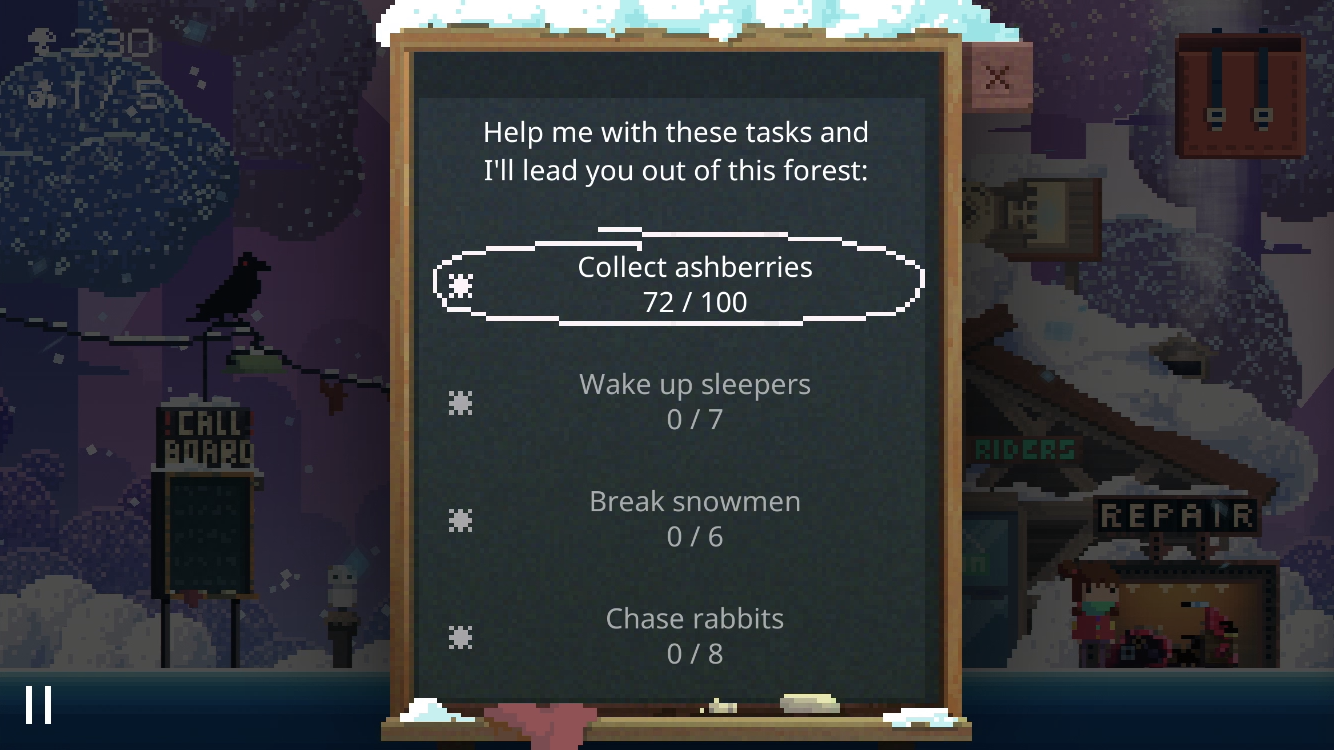 Once you complete all four tasks in an area, you take on a sort of boss battle. Some animal will chase you and you have to either outrun them or avoid their special attacks — or both. For instance, a booster can help if you’ve got a laser beam hot on your tail. Unlike the tasks, you can’t chip away at the boss. If you crash, you start back at the beginning of the chase and try again. There are sign posts that tell you how close you are to the end, which helped me a lot when I was struggling. Knowing I was coming close kept me motivated instead of rage-quitting after a number of failed attempts. It’s possible I’ll still quit on one of the bosses, but I appreciate the change of pace in the game and the fact that you can keep trying until you succeed. I can’t say the same for some other parts of the game. 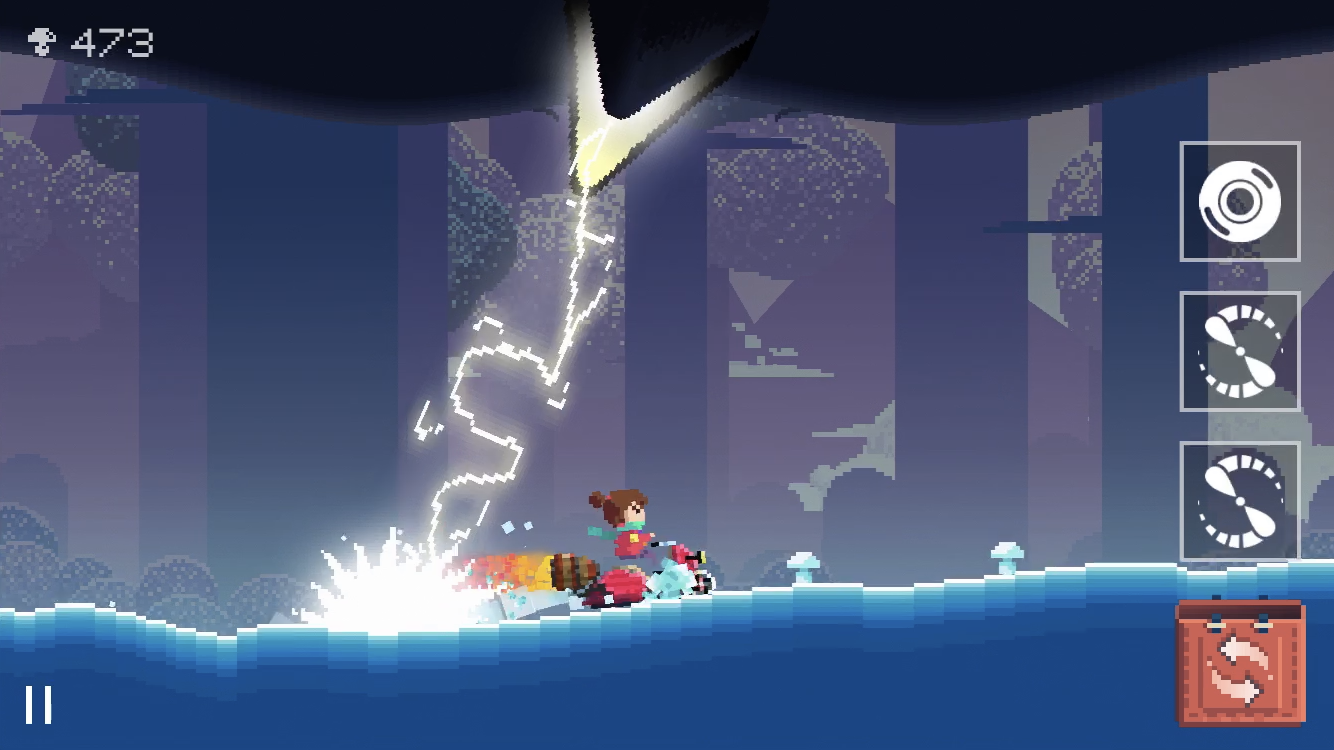 A sore point for me is the bonus content. There are a ton of secrets and achievements to unlock, which sounds great in theory. But it’s very easy to miss out on them. I already missed one in the second area without even realizing it, as the landscape changed to just a few rocks I needed to hit with a pickaxe. I messed up (though I thought I used the pickaxe at the right time) and didn’t really think much about it, but learned later that if I didn’t crash on one of those rocks, I would have gotten a bonus mini game. That would have given me a special item and an achievement. I also missed out on the item in the third area, but not unwittingly. My strange deer friend wanted me to help him catch some fireflies by playing a rhythm game. I was actually doing pretty well, despite not being very good at them usually. But there were at least two or three times that my swipe didn’t register and that messed up the whole sequence. The game allowed me a few tries, but not enough. Once I messed up a few times, I lost the chance to try again. That was it. It determined I sucked too much to even be allowed any more attempts. I found it insulting, especially since most of the mishaps weren’t even my own fault. I also found it a bit obnoxious, as apparently the only way to try for that again is to start a new game. 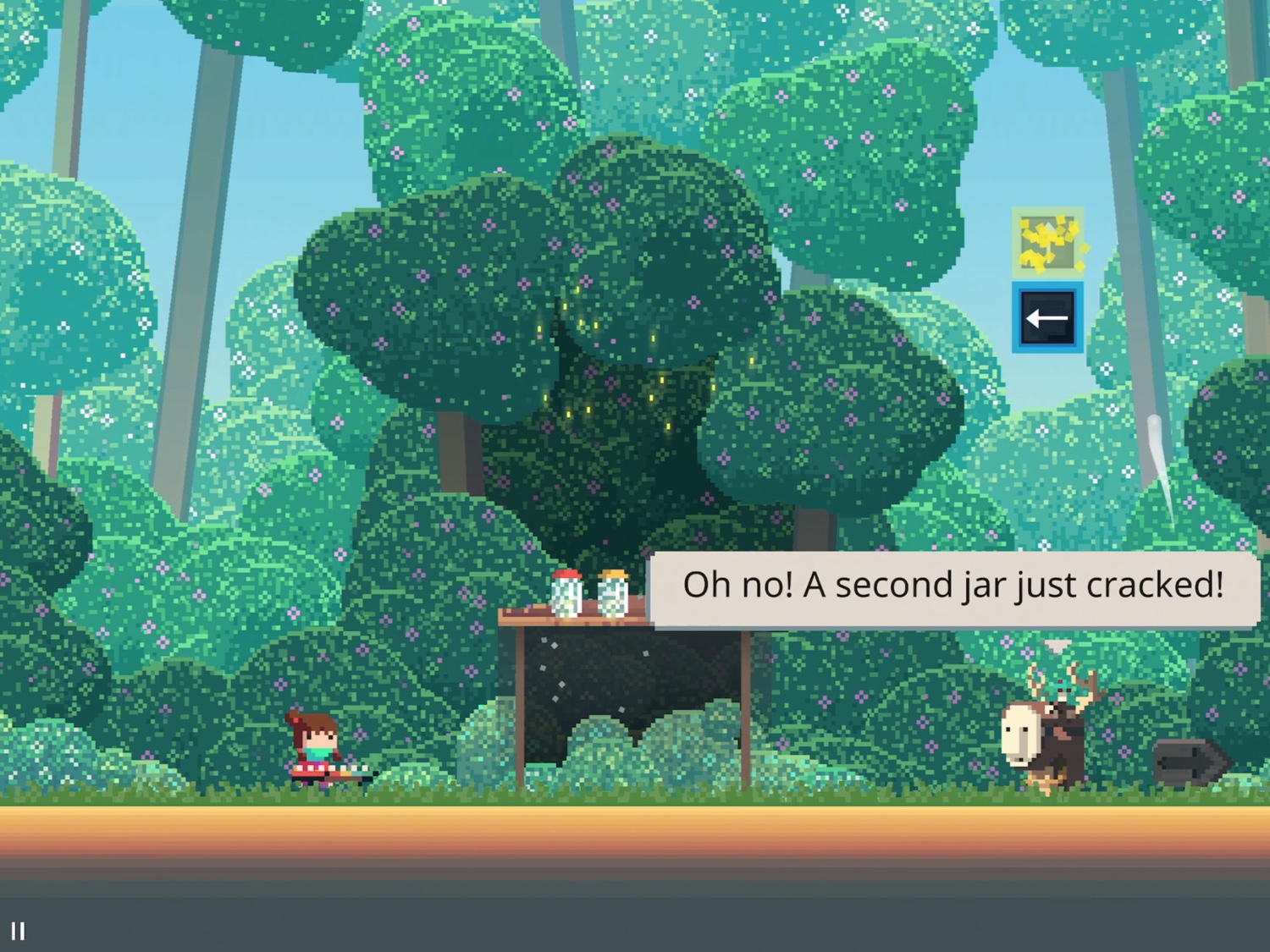 There really is so much to love about Summer Catchers — it even has flawless iCloud sync and feels just as good on iPhone as iPad — which is why I keep coming back to it even when it pushes me down. I could even maybe get past all the luck-based aspects. But it’s the year 2020 and I have more games I want to play than is possible in a human lifetime — not to mention all the movies, books and TV shows I want to consume. In the days back when people bought one game and played it for a month, I could maybe understand wanting to draw out the gameplay through repetitive grinding and replaying the game over to try to find all secrets. But as much as I like the game, I do not have the time or interest in starting over from scratch once I complete it. A game like this should let players revisit older areas and try to find things they missed the first time. Hell, I would have liked to be able to do so as soon as I realized I missed something. What would be the harm in that? If necessary, offer an achievement for finding all secrets without having to go back, but don’t force me to miss out on content because I’m not perfect. 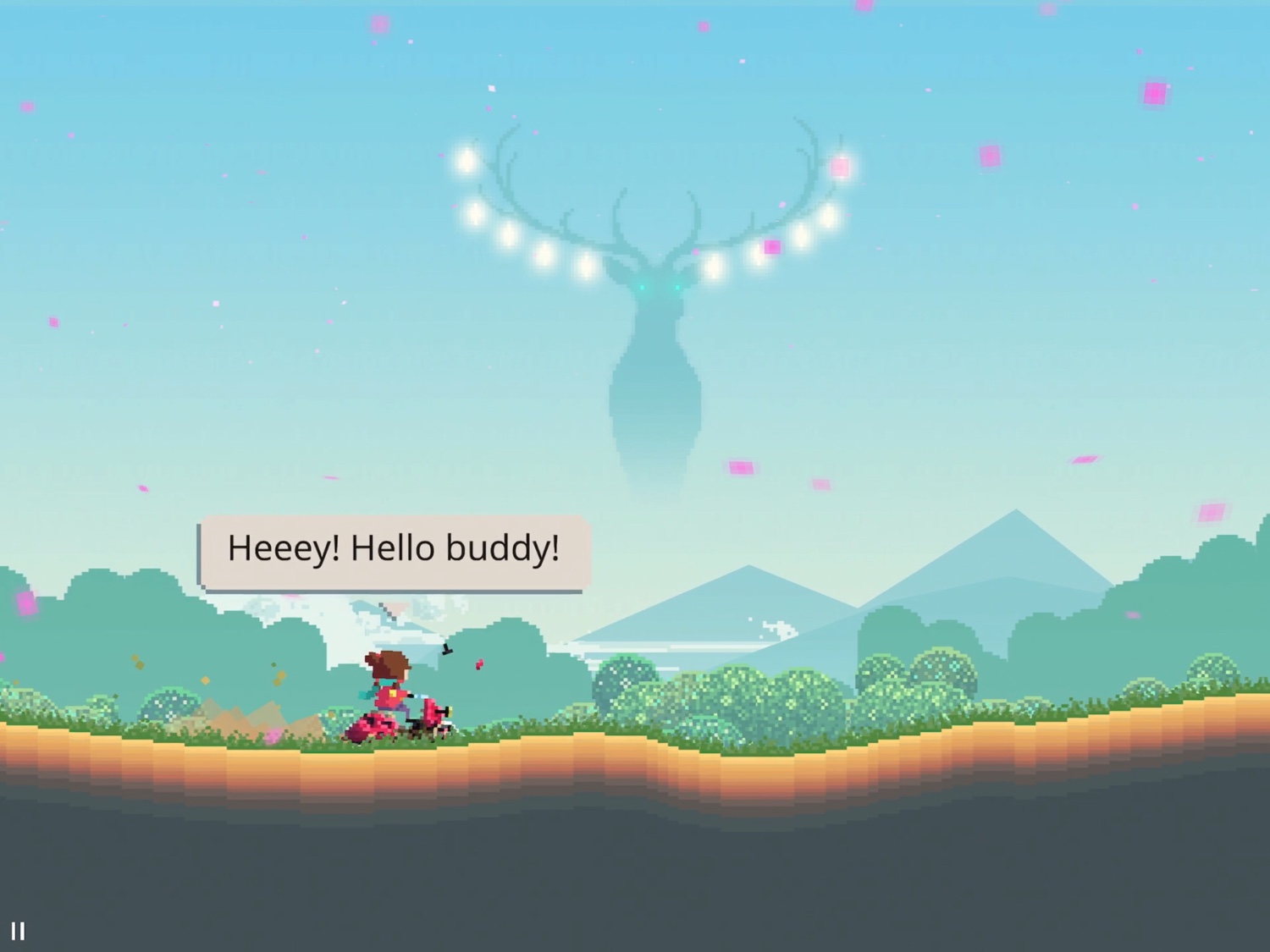 At the end of the day, I think I would still recommend Summer Catchers. It calls to me when I’m away from it and I’m always eager to see what it has in store for me next. But the luck-based system requires a lot of patience. And you have to be either perfect to avoid missing any bonus content or play through this fairly long and grind-heavy game more than once to see everything — and then not mess up on your second try. If you’re ok with that or just don’t mind not seeing everything, grab Summer Catchers here and chase the sun!

I also have guide with some helpful tips and tricks, as well as more gameplay videos here.

‘Causality’ Review: If I Could Turn Back Time