Full disclosure here. I don’t have much experience with the Castlevania series, and no nostalgia for it. The only game I’ve played was Circle of the Moon on my Game Boy Advance, and I didn’t get very far. But Symphony of the Night (SotN) just released on iOS and Android for a measly $2.99, so I decided to give it a try. If you prefer to hear from someone who has played the game on other platforms, feel free to do so. But for anyone interested in staying, I have some gameplay videos for the iPhone and iPad touchscreen controls, as well as some iPad gameplay with a Duel Shock 4 controller. Continue below for both video and impressions of each. 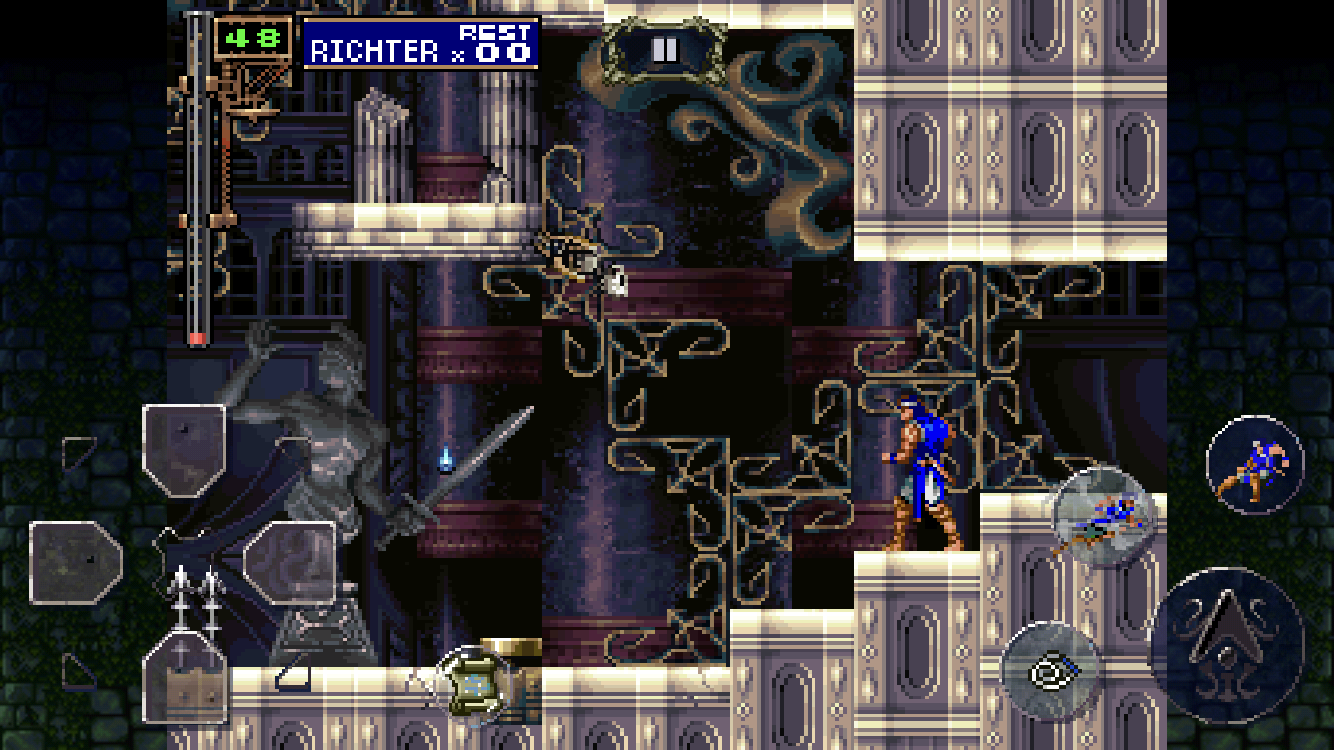 So first off, I tried the game on my iPhone 8. As can be expected, the game plays in 4:3 aspect ratio, so any extra space on the sides is filled in with some pixelated art. There are no instructions, so if you haven’t played before, you’re going to need to mess around and see what things do. I didn’t even realize how to save the first time I encountered a save spot. Anyway, I started as Richter, since I didn’t know any better. But you can still get a feel from the video how the controls work. The button placement on the screen is not ideal, as it covers a lot of the action. Everything is static — there’s a directional pad on the left and a jump button on the right, surrounded by your two attack buttons and evade. As someone new to the game, I spent most of this video being confused as to why picking up hearts didn’t actually heal me. If you die without having found a save point first, the game does let you continue from the last room you were in. But it might not make much of a difference if you don’t find any food or save point before taking more damage. Anyway, the biggest issue for me with the iPhone controls was that I had trouble jumping and attacking. Either the hit zone is too small and I was missing it, or it’s just not responsive enough. It would only work for me maybe 50% of the time. Considering how often you need to jump and attack, this is not good. I also had trouble sometimes making jumps that looked like they should have been easy. I didn’t have trouble with them when I switched to my iPad, so I thought that was strange. Otherwise, if you’re already comfortable with the game, the controls are probably serviceable on iPhone, as long as you can manage with your fingers blocking some of the action. Since there’s no iCloud sync, you’d be stuck playing on there. If you want to play at home with a controller, you can, but you can’t switch to your iPad at home. If the game got iCloud sync, at least you wouldn’t have to deal with a small screen and these controls all the time, only on-the-go. (EDIT: I’ve gone back and started a new save with my iPhone. It’s not as bad as I initially thought, but jump attacks are still problematic. It’s also hard to see sometimes with my fingers covering so much of the screen. But it’s still better than the iPad onscreen controls. I’ve embedded the second video below.)

Next, I tried on my 2017 iPad Pro 10.5″ with the onscreen controls. Since the game and the device are both 4:3 aspect ratio, there’s no empty space. It looks surprisingly good on a large retina screen, considering when this game was made. Still, this was by far the worst way to play it and I don’t recommend doing so unless you’re really desperate to play and have no other option. The d-pad and buttons are fixed in the two lower corners. There’s no way to move them, and it’s incredibly awkward to hold a normal sized iPad like that. Normally, I have my hands closer to the center of the screen, but this game forced me to hold it all the way at the bottom. I again had trouble jumping and attacking at the same time, though I did notice that I had an easier time making jumps that were giving me trouble on my iPhone. Still, that doesn’t make up for how awful it feels to play like this. If they add a way to customize the controls, I could see maybe revisiting it. But as is, you’re in for a bad experience if you have an iPad and no physical controller.

Last, I paired my PlayStation DualShock 4 controller with my iPad. This is by far the best way to play. The game looks great without the buttons on the screen, and I was easily able to jump and attack at will. By now I had also been more familiar with the game than in the last two videos, but all that really meant was that I was being more careful not to get hit, since I knew the hearts don’t heal me. I also found a couple of save spots and used them to heal and save so I wouldn’t be reliant on the auto-save feature. I also made it to what I think is a mini-boss, but I got overwhelmed and died. It didn’t help that I couldn’t see any health meter for the enemies, so I had no idea how I was doing against them. But I might try again, as the controller at least makes me feel in control. Whether you have an iPhone or an iPad, a controller is, hands down, the best way to play. One might even argue it’s the only way to play. But fans who are desperate to have it in their pocket might find a way to make the onscreen controls work for them even if I couldn’t.

And there you have it. Again, I’m the farthest thing from and expert on Castlevania, but hopefully these three videos and my impressions will help you decide if it’s worth grabbing Symphony of the Night on mobile. If you decide to do so, you can download it here for $2.99. It’s a universal app but has no iCloud sync, so you’ll have to choose a device to play on unless you want multiple games going at once.