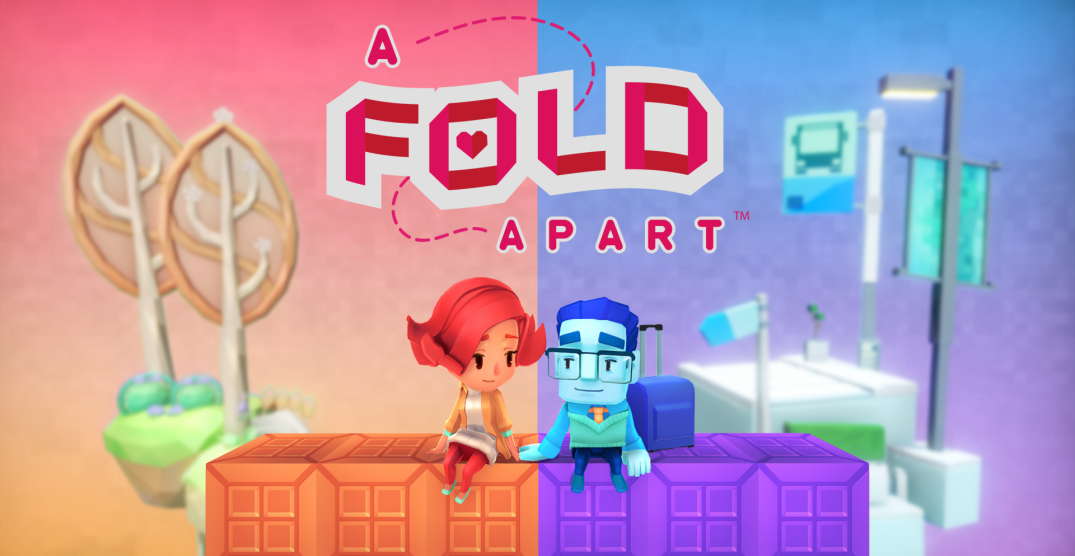 Lightning Rod Games’ paper-folding puzzler, A Fold Apart, was one of the Apple Arcade games I was most looking forward to. It has you folding photographs of a couple dealing with a long distance relationship, in order to connect broken paths and allow them to get to their destination. The idea of folding paper to solve puzzles isn’t brand new, but it’s rarely used and an intriguing one. It’s also a perfect fit for touchscreens, as the mechanic is very tactile. It obviously makes more sense to use your hand to fold paper than a controller. Unfortunately, clunky and sometimes unresponsive controls hinder the fun to be had here. And the story, which should help the game move along, instead gets in the way and slows progress down to a snail’s pace. I’ll get into more detail, but this is one game that’s hard to recommend unless you already have an Apple Arcade subscription and a ton of patience.

The first thing you’ll do in the game is choose the gender of each of your characters. The default is red for female and blue for male, but either one can swap out so you can have a same-sex couple. This is a nice gesture, but I wish more effort had been put into their appearances. Basically, to turn the woman into a man, they cut her hair short, and to turn the man into a woman, they gave him longer hair. It’s almost offensive and makes me wish they just left it as a heterosexual couple. At least then it could have represented two very specific people instead of awkwardly trying be an everyman that relates to everyone. When I first booted up the game, I didn’t even realize it was a character selection screen and just tapped on one of them randomly. It wasn’t until I saw on Twitter that the developers didn’t release the game in countries where same sex marriage is illegal that I realized I had chosen the lesbian couple. I’m not sure how effective that is as a protest, but that’s a discussion for another time. I just wish they had put more effort into both genders for the models, as in its current state it’s clear that red is meant to be a woman and blue is meant to be a man. It’s great that they were trying to be inclusive, but it comes off more as an afterthought than a plan from the beginning. Still, it would be easy to overlook if the rest of the game didn’t have so many other problems. 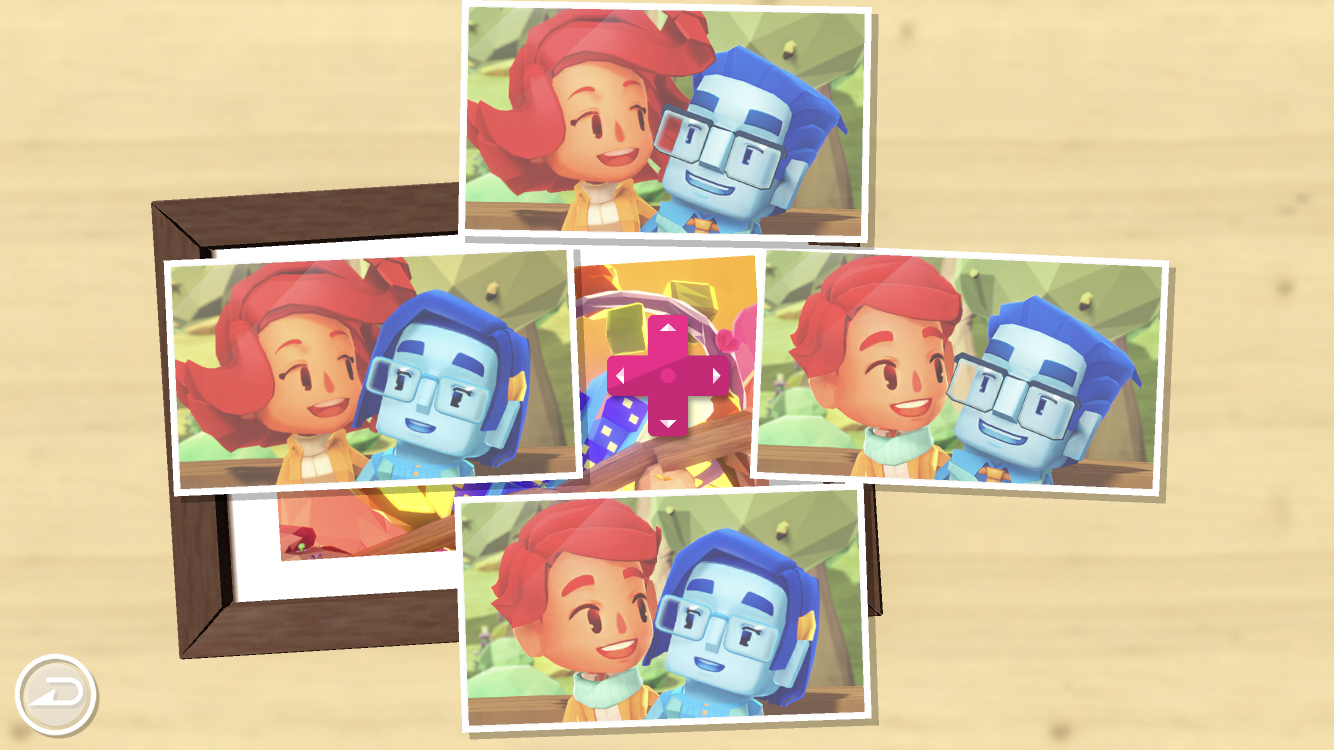 Although this is a puzzle game, most of your time will be spent tapping the screen to walk, reading texts between the two protagonists, and reading their inner dialogues. You see, they used to live in the country together, but the blue one is an architect and got a great job in the city. So they decided to try a long-distance relationship for a year. The game starts two weeks into this experiment, and they’re already having a hard time of it. Now, I know A Fold Apart was designed before the coronavirus crippled the world and forced everyone into self-quarantine. But it was hard to empathize with these two people in a meaningful relationship struggling from just two weeks apart, when it’s been over a month since I’ve spoken to anyone in person besides a grocery store cashier. Maybe it would be therapeutic for couples separated right now, but to me it just came off as incessant whining. And it didn’t help that the story is hammered home through tons of text that you have to constantly stop for when you want to just get to the next puzzle. 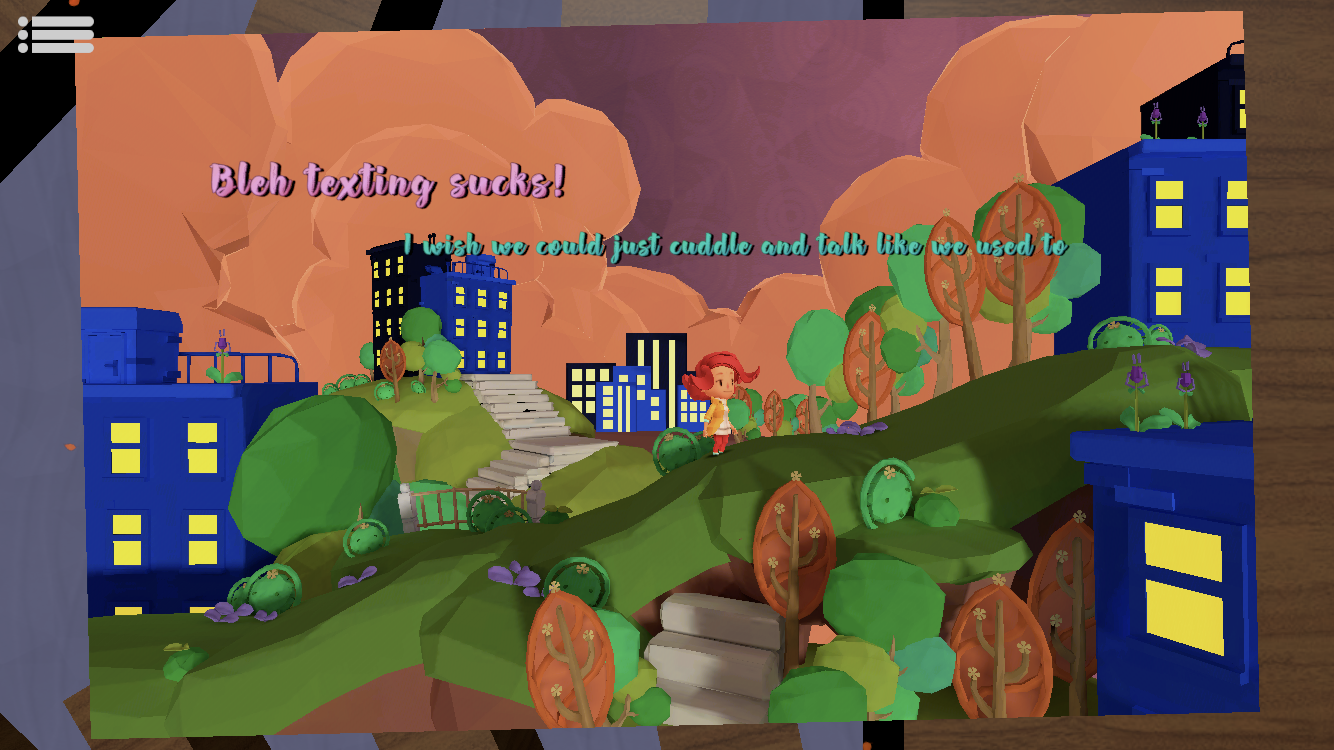 What’s especially odd about all the dialogue is that the game already has some excellent environmental storytelling. When the red character is upset about the idea of moving to the city, buildings start invading the peaceful countryside. When their relationship is strong, you see bicolored trees blooming. When things are especially bad, they’ll walk through huge raindrops frozen in time and buildings will start collapsing. The puzzles themselves also help convey the story, as you’re taking scattered platform pieces and bringing them together to complete a path. Later, when you encounter a mechanic that lets you rotate the whole screen, trees and buildings will succumb to gravity, leaving an empty world. There’s even the subtle effect of the characters each walking their own separate paths but towards each other. So you can see, there’s a lot being told without words. If the developers wanted to make the story less open to interpretation, a few words here an there would have sufficed. But instead, we have to first sit through their text messages and then a painfully long internal dialogue where they go back and forth through every minuscule thought they’re having. This had the opposite effect for me than what the game was going for, and I got annoyed with them instead of commiserating with them. At the very least, the storytelling between puzzles could have been automated so the player doesn’t have to keep tapping the screen to walk two inches at a time. 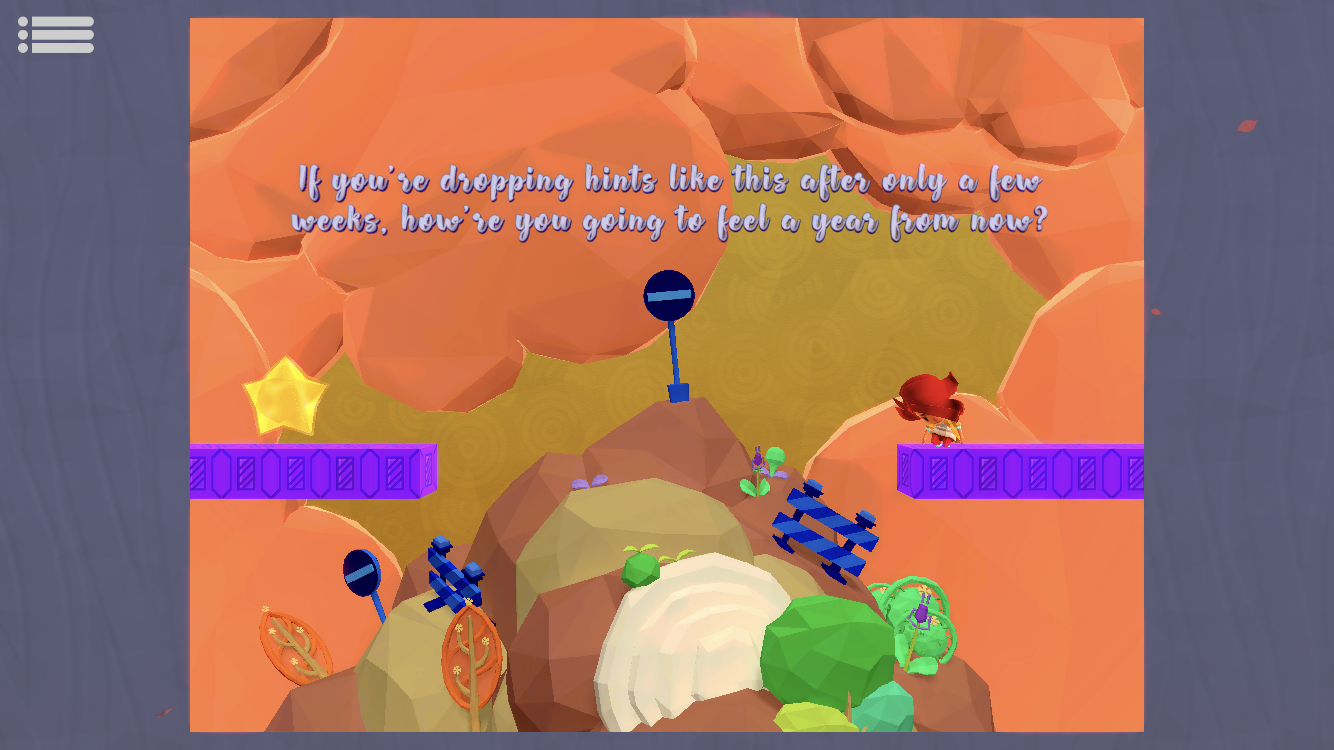 The puzzles themselves are interesting enough. It starts off simple, introducing you to the mechanics one by one. First, you learn that you can press a button to flip the page over and see the other side. Then you’re shown how to grab an edge and fold in order to make a platform from the back of the page meet one on the front. Then you’re taught to double-tap on a folded piece to unfold it. It all seems simple enough and very touchscreen-friendly. Unfortunately, the folding controls are inconsistent. Sometimes I can easily grab an edge without much effort, but more often than not I would pull it and nothing would happen. Instead, I would have to tap and hold for a few seconds before dragging. This made an already slow game feel like an extra slog. I’d finally be at a puzzle, in my element, and instead of just focusing on how to solve it, I’d have to battle the controls. Sometimes my character also didn’t move the first time I tapped, requiring multiple taps to get them moving. It becomes exhausting after a while, but I stuck with it because I did indeed enjoy solving the puzzles. Even though many are fairly easy to solve just by scoping out both sides of the photo, there were a fair few that gave my brain a good workout. The puzzles themselves are definitely the strongest part of the game, especially once you can start folding from all four edges of the screen, and even the corners. The rotating mechanic may have been a bit gimmicky by the time it was introduced, but those puzzles were still enjoyable enough to solve.

But as much as I liked the puzzles themselves, I did encounter a few issues with the game’s laws of physics. Early on, I solved a puzzle in an unintended way and the game just wouldn’t let me walk my character to the goal. It was right there, just a couple of inches away, but until I changed my solution, I couldn’t complete the puzzle. Another time, my character couldn’t climb up a ledge that was the same height of every other ledge he’d been climbing throughout the game. I had to change my solution again even though the one I used should have worked based on the game’s own rules. With a game like this that offers the player so much freedom to mess around, it’s important that either alternate solutions are impossible, or that any solution the player finds works. And while we’re on the topic of climbing, I’d like to add that some of the joy of the puzzles was lost in having to watch my character slowly push or climb over boxes.

In the end, I wouldn’t say I regret playing A Fold Apart. But I do regret all the time it unnecessarily wasted. There’s a solid game underneath all the layers of muck, but you have to slog through it all to get there. I wish the game would have had more confidence in its audience to pare back all the dialogue and trust that the message could still get through. Even small changes like automated walking between puzzles would have made a huge difference. I forced my way through all the slow walking and whiny inner dialogue so I could get to the puzzles, but not everyone is going to have that kind of patience. I also would have liked to see a way to replay the puzzles once you complete the game, to try and find cleaner solutions for some of the trickier ones. But currently the only option is to start over completely, and I have no interest of doing so in its current state. While some things probably can’t be fixed, I do hope the fact that this is an Apple Arcade game means it will get some support and some of the bigger issues can be resolved. Until then, I wouldn’t recommend going out of your way to play A Fold Apart unless you’re more interested in the story than the puzzles and have a lot more patience than I do. If you still want to give it a try, grab the game here and help the couple iron out their differences.

And if you get stuck on any puzzles, you can try my walkthrough guide.