A while back, Fiddlesticks’ Hue appeared in the pre-order section of the App Store without any warning. I had heard good things about it on other platforms, but never knew an iOS port was in the works. As a puzzle fan, I was excited about the news, especially since the game features a unique mechanic that has you messing around with colors to progress. Puzzle platformers can also be a great fit for touchscreens if they’re forgiving enough and the controls are fine-tuned. Unfortunately, that is not the case here and, as much as I wanted to love Hue and stick with it to the end, I rage-quit after only about forty-five minutes with it. Continue reading to find out why.

First, the good. From the opening splash screen, I was already mesmerized by the relaxing piano music that manages to avoid being either distracting or boring, which is no simple task. The art style itself doesn’t stand out, but it’s easy on the eyes and serves its purpose in providing legible environments and interactive elements. There’s even a fully fleshed-out story that’s told through top-notch voice acting from British actress, Anna Acton. And last, the overall idea of the game is a brilliant one that offers plenty of ways to build on it. As you explore this gray world as Hue, you collect little slices of a color wheel. Once you own a color, you can change the background to match it. What that does is make any obstacles of that color disappear. So if there’s a blue wall and you change the background color to blue, that wall disappears. Change the color to purple, and that blue wall reappears. This allows for some clever box-pushing puzzles, but also creates some of the most infuriating platforming sections I’ve ever seen. These levels might have been a welcome challenge on other platforms with a controller. But the touchscreen controls leave much to be desired and create endless frustration. 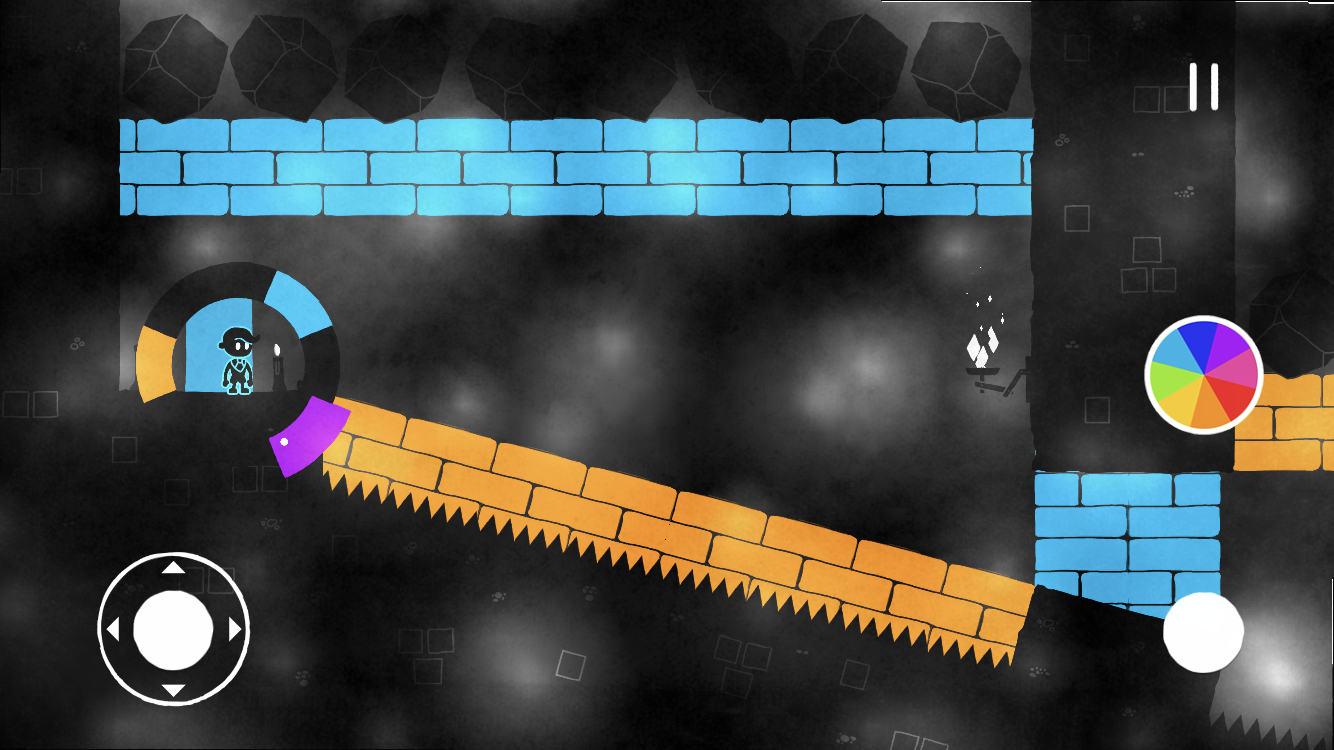 First off, if you plan to play on an iPad, just don’t bother. I started on there first so I could enjoy the game on a larger screen, but could tell right away it would be an issue. The joystick is in the lower left corner, lower than I’d like, but thankfully you can still use the space above it to move. The jump button is on the right, with the color wheel above it. And last, if you get close to a box, a new button appears that allows you to grab onto it so you can pull. It all seems relatively straightforward on the surface. But the joystick on iPad is completely unreliable. I need to push my thumb all the way to the right to get Hue running, and if I need to lift my finger to adjust a bit, he goes off in the other direction. 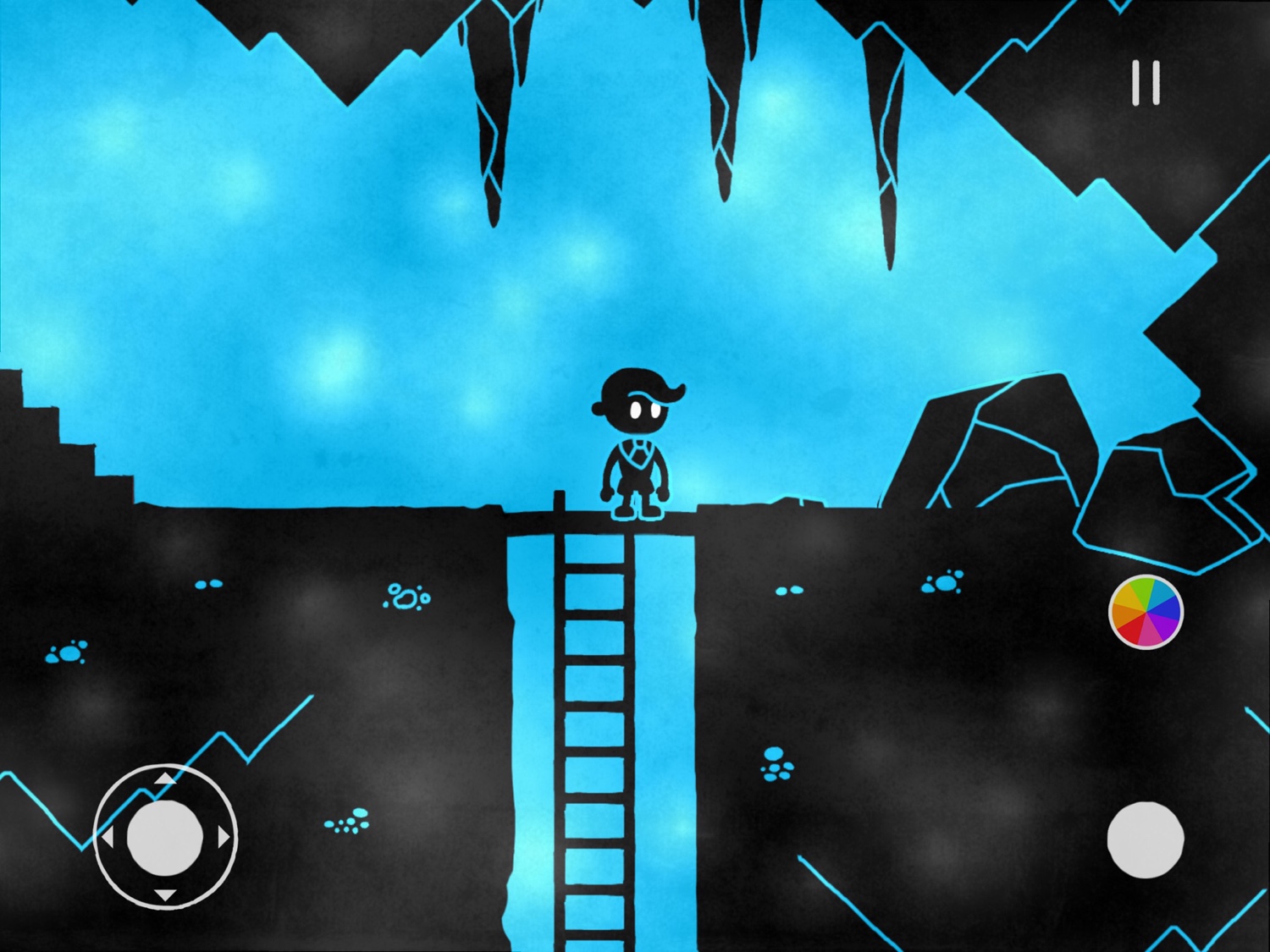 Ladders are especially problematic, as the game can’t tell whether I’m trying to go up, down, or get away from it entirely. If I finally managed to get down a ladder, it would then send me right back up. I stuck with it anyway for a bit, thinking it might be doable if the game stays relatively forgiving. But I gave up pretty early on, when a level asked me to outchase a rolling boulder. Each floor had a ladder on the other side of the gap, and if I landed on the ladder while jumping off, it would be impossible to get down it before the boulder hit me. After a few attempts of trying to avoid the ladders completely, I saw it was pointless and threw in the towel. Since there’s no controller support, playing on an iPad is just not doable. The good news is that the game is free to try and you would be able to tell right away that it’s virtually unplayable on iPad before spending money to unlock the full game. 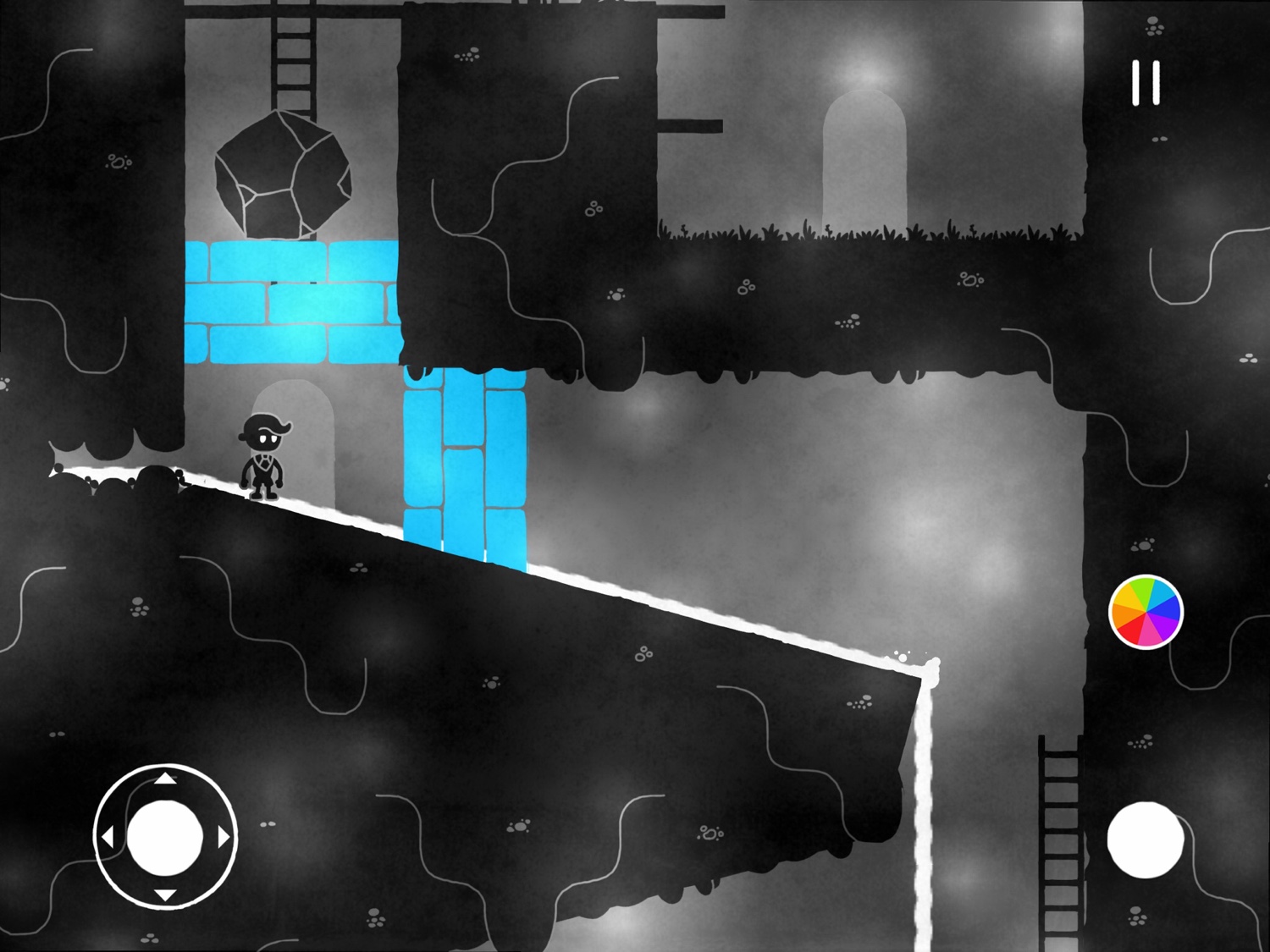 Frustrated but hopeful, I started a new game on my iPhone, since there’s no iCloud sync. Already I could see a huge difference, as my thumb naturally lands further from the edge of the screen, so I didn’t have to stretch my thumb to run. Everything was a lot easier to control, though ladders still caused a bit of trouble. Still, I managed to get past the level I struggled with on my iPad and made some decent progress. I unlocked three colors for my wheel and and was starting to enjoy the game quite a bit. I’m not the best when it comes to games that require fast reflexes, but the mix of thoughtful puzzle and hectic platforming and compact levels kept me from giving up easily when I died. At least, for a while.

Then I got to a vertical section in which I had to make my way upwards by jumping from platform to platform. Landing on a platform and then changing to another color wasn’t so bad. But then I realized I was meant to change colors mid-jump. If I was on a blue platform and couldn’t see the purple one above me, I would have to jump up and quickly open the color wheel and switch the background to blue before landing. This is tricky enough with a touchscreen, since you don’t have any physical feedback to help you choose a color. You have no choice but to look at the wheel. And even then, it’s entirely possible that the sensitivity of the controls will cause you to choose a different color than you intended. But even if you do choose the right color, you have to do it before you fall too far for it to matter. You see, opening the color wheel slows the game down but it doesn’t pause it. So while you’re choosing a color, you’re still falling. I think it needs to either pause completely or slow things down more to make up for the fiddly controls. The wheel also won’t open at all if you’re standing in front of a colored object. So if you fall a little too far before trying to opening it, you’ll just continue falling. I nearly quit on that upward climb, but persisted and managed to get past it. And for a while I was enjoying myself again. The puzzle sections outnumbered the platforming sections, so I was able to admire the mechanics and work my brain a bit. 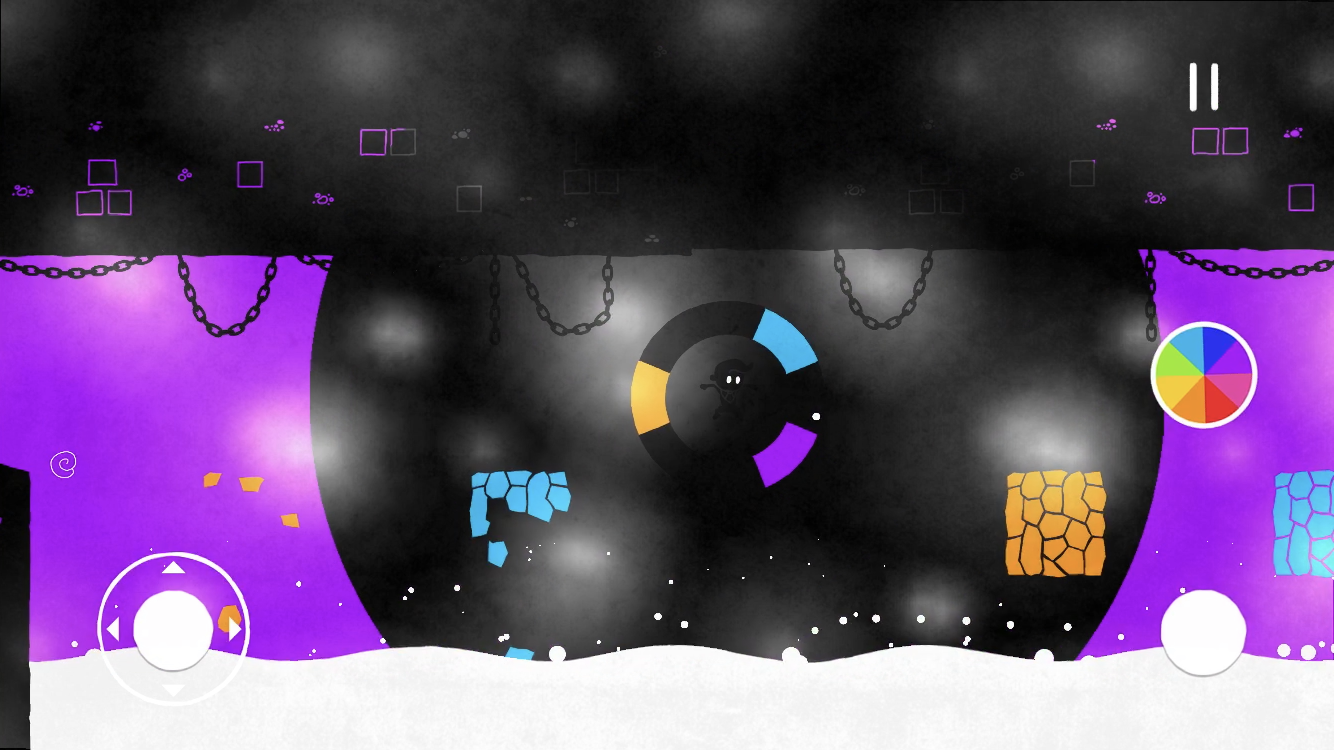 After about a half hour, I was optimistic about progressing through the game and was excited to see where it would go. But then it just became completely obnoxious. Up until this point, levels were short enough that deaths didn’t feel like the end of the world. But the level where I called it quits was like three levels in one. It starts with a running section where you have to change the color every few feet to open a wall, outrun the boulders chasing you, and avoid accidentally removing the floor protecting you from the spikes. It’s tricky, but plenty doable. The next section, though, has you jumping across crumpling platforms and changing colors mid-air. If you die, you have to start back at the very beginning of the level.

Like I said, I have a lot of trouble with the mid-jump color-swapping, so I died a few times before finally getting it. And then the other side surprised me with more of the same boulder chases. Still, I wasn’t ready to let the game beat me down. So I tried again and managed to get through all three sections. And guess what was at the end of it all. A ladder! Yes, those same ladders that are next to impossible to work with even when you’re standing still. And here I was meant to to jump into the air and grab onto the ladder to avoid drowning. Instead, I went straight through the ladder and landed in the water. And since there’s no checkpoints, I was sent back again to the very beginning of the level. And that’s where I dropped an f-bomb and quit for good. 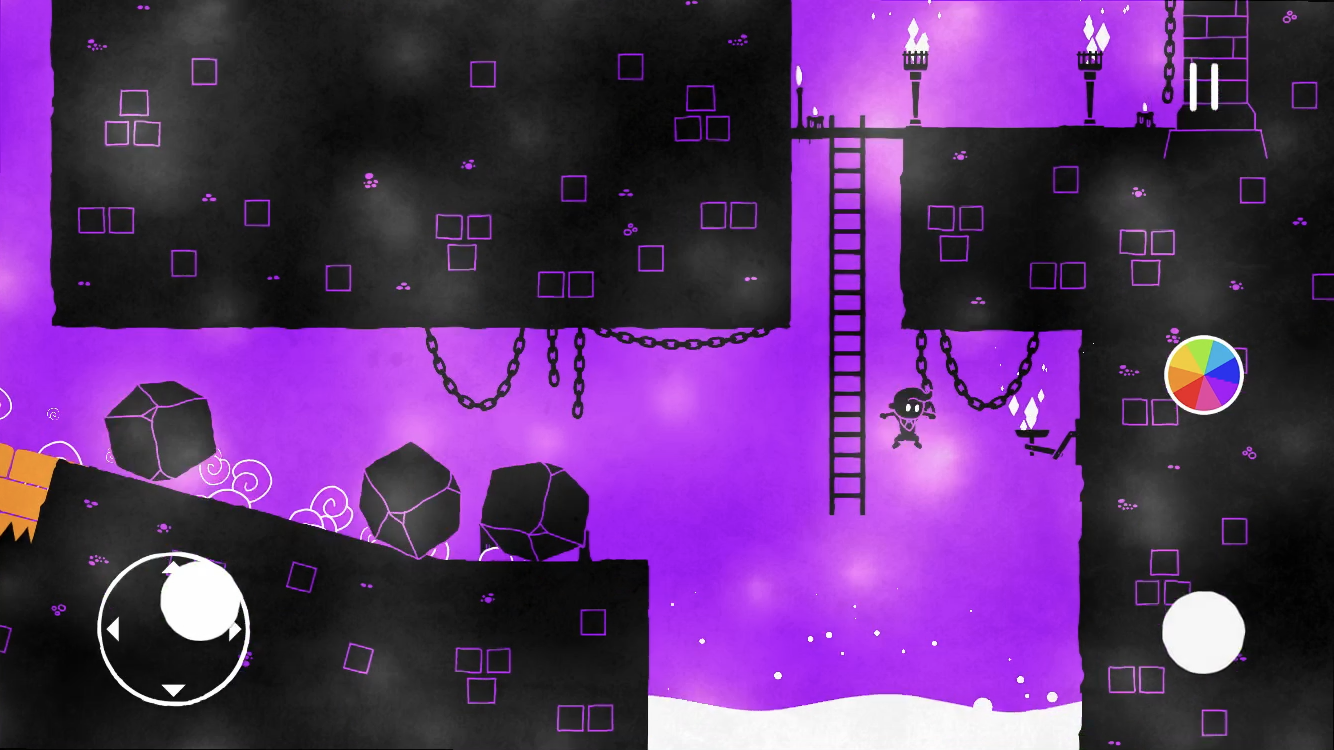 There’s a lot to like about Hue, and perhaps with a controller all these issues would have disappeared. But with no controller support, players are left with lackluster touch controls to pull of fancy maneuvers in mid-air. This port unfortunately feels rushed, leaving iOS gamers with a nearly unplayable version of what seems like an otherwise polished game. Even the acclaimed colorblind mode was left out of this version. Like I said, I love the music and voice acting and solving the color-based puzzles. But the controls are just not up to snuff for the more precise platforming sections. Perhaps more checkpoints on the longer levels would have made it doable, but as is it’s just not worth the hassle. By all means, give the free demo a try. But I recommend waiting for either controller support or improved touch controls before buying the full game. If you still want to check out Hue, download the game here and watch out for those ladders!