Match-three games are one of my favorite genres to play on my iPhone when I have a few minutes to kill here and there. But I’m not talking about the free-to-play Candy Crush or its myriad of knock-offs. When a match-three game sucks me in and holds my attention, it’s because it pushes the genre beyond what we’re all used to. Match Six ate up all my free time for a good while, and now the latest is Florian Grolig’s minimalistic but stylish High Rise. It might not seem like much at first glance, but once you start to truly understand the rules, it becomes hard to put down.

High Rise takes place on a 5×5 grid where you attempt to build your cityscape. The game starts off with three pieces on the board, each either one cube or two cubes stacked atop each other. At the bottom of the screen, you’re shown the next piece you can place, as well as the three after that. Using that information, you need to try and strategically place them so that the same-colored cubes will merge into taller structures and become buildings. Same-colored and same-height structures next to each other will merge into the one that’s been there longer. You can also put smaller pieces around a taller one and when there are an equal number of cubes around the building as inside it, it will suck those other pieces into it and grow. Early on, it’s not too difficult to organize everything nicely, but the bigger a building gets, the harder it is to make it grow. And if it stops growing, the space around it starts to get cluttered. Once you run out of space on the board, it’s game over and your score is added to the leaderboards.

But there is another tool that comes in handy. Every 500 points you earn, you’re given the ability to remove one building from the board. While I’m sure everyone will develop different strategies as to which buildings to remove, clearing up a building that’s blocking your progress can make all the difference between a game over and new high score. So while the pieces you get are randomly generated and therefore create a luck factor, the game gives you more than enough tools to mitigate that luck if you use them right. Despite being obsessed with the game all week, I’m still honing my strategy to try and improve my scores. It doesn’t hurt that the merging animations are slick and satisfying to watch, especially if you get a nice big chain going. It’s also exciting to see those tall buildings form, attracting things like blimps, helicopters, and even King Kong! The graphics are not going to compete with Infinity Blade, but they’re stylish enough to appease my senses without draining my battery if I play on the go. So it’s the perfect game to play anywhere. 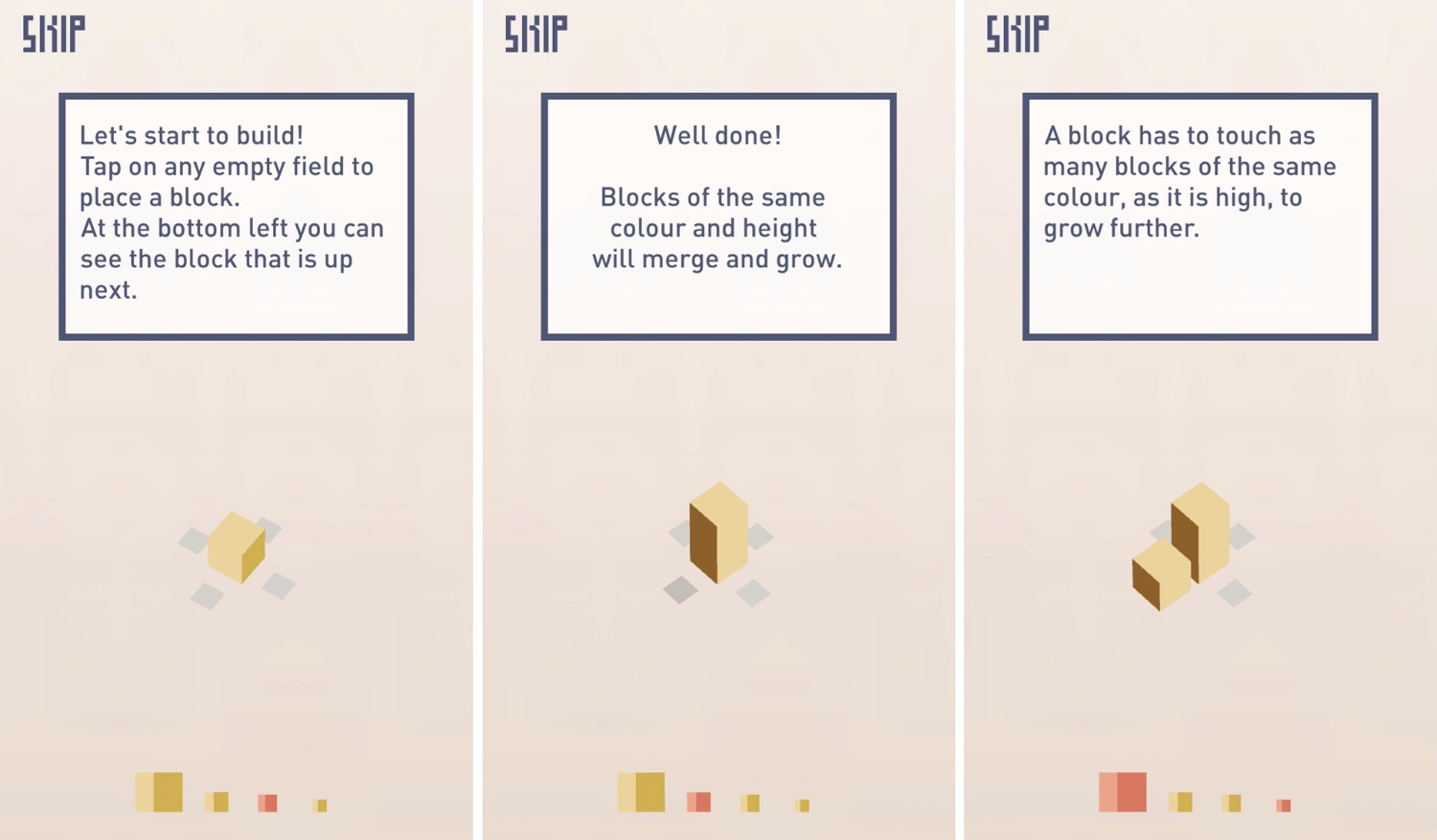 Now, as much as I love High Rise, I do have a few small complaints. First off, there’s no way to save mid-game, so if you take a break there’s a chance you could lose your progress. Considering the goal is to keep the game going as long as possible, that seems like a big oversight. But the developer is aware of it and expressed interest in adding saves in an update. Besides that, I find the music very repetitive, so I toggled it off in the settings. But it turns back on every time I start the app. Again, the developer is aware of this and plans to fix it. Meanwhile, I tend to just play with my phone silenced. There’s also some minor bugs, like the building removal not always working unless you angle the camera a certain way. There’s also some weird phenomenon where I and others have reported thinking the next block is one color but it ends up being another. We’re still not sure if it’s just our heads doing something weird or an actual bug. Either way, the developer is trying to find a solution. Since they seem to be actively listening to feedback, I’m sure the game will only get better from here. 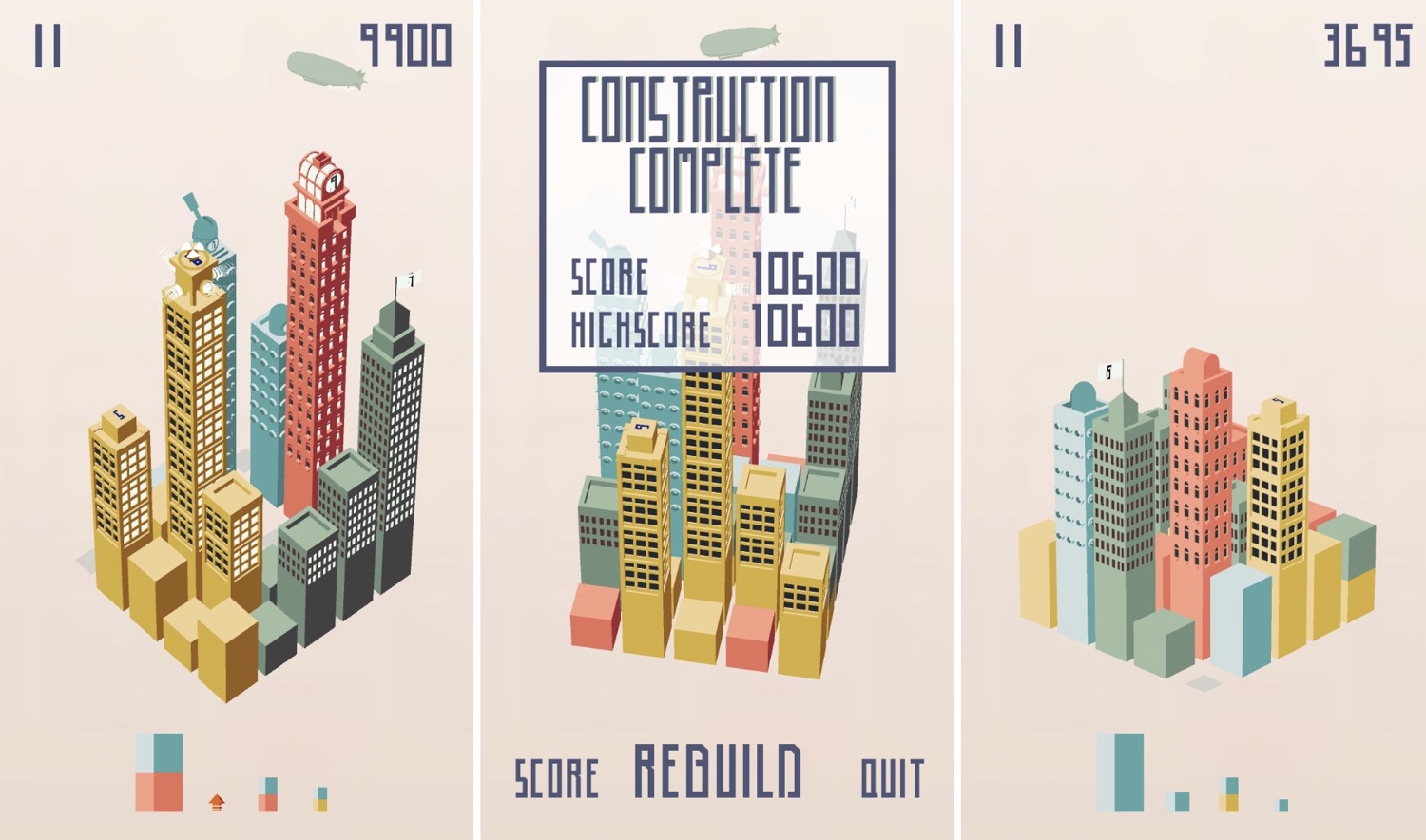 If you like endless puzzle games, High Rise is one you absolutely need to try. The game is free and supported by ads, or you can pay just $0.99 cents to remove the ads and play as much as you want. So whether you prefer to watch the occasional ad or spend a pittance to get rid of them, there’s no excuse not to try it. But also take the time to truly learn how the rules work. Those who do will find an immensely satisfying strategy game that’s hard to put down. So download High Rise here and start building those skyscrapers.