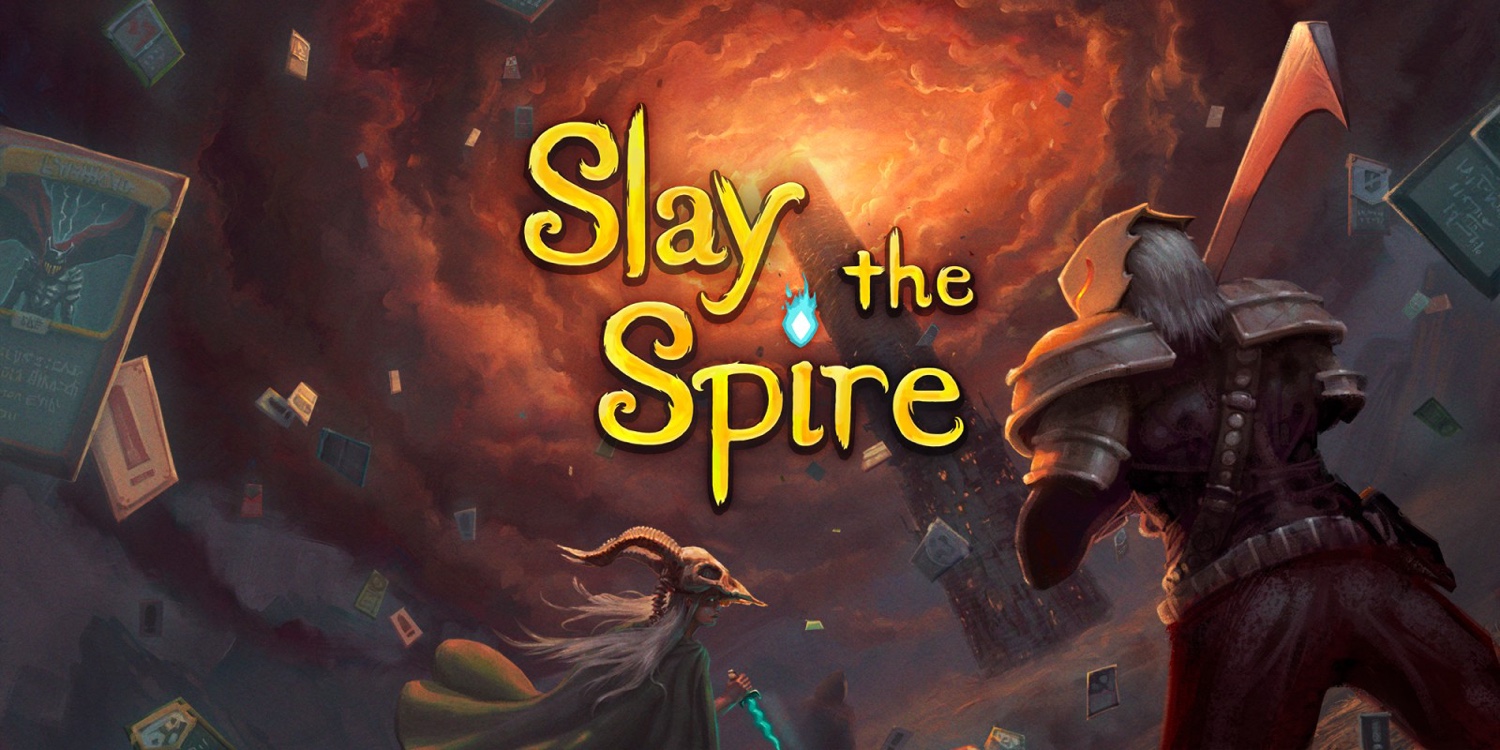 One of the genres I’ve really gotten into in the last few years is the card-based roguelike. If designed well, they can be the perfect fit for iOS, since they focus on strategy rather than reflexes and therefore should be playable just about anywhere. Slothwerks’ Meteorfall is a superb mobile-centric version that I still play every day. So it was hard to ignore all the constant praise for MegaCrit’s Slay the Spire, and all the excitement over the inevitable mobile release. Well, that day is here and it is indeed a great fit for mobile, though the port has a few kinks to work out, as well as some missing features I would like to see.

In Slay the Spire, you play as one of four different classes and attempt to climb the Spire and defeat everything in your path. It’s made up of three acts, with a big bad boss at the end of each. Since it’s a roguelike — with some roguelite elements — death is permanent and the idea is to try and survive as long as you can. At the start of a game, you choose one of the battles at the bottom of the map. The path you choose is the one you’ll have to follow for that act, though it does branch off at times. Once in battle, you and your enemies take turns moving. Each turn, you draw a handful of cards that each have a specific energy cost. You can play as many of those cards as you want until you run out of energy. What really makes a difference here over other similar games is that before you act, you can see what the enemies will do on their next turn. So if they’re planning to attack for 10 damage, you would want to play some defense cards to build up your amount of Block. But if you can see that no one plans to attack, you can go all out on the offensive for that turn. 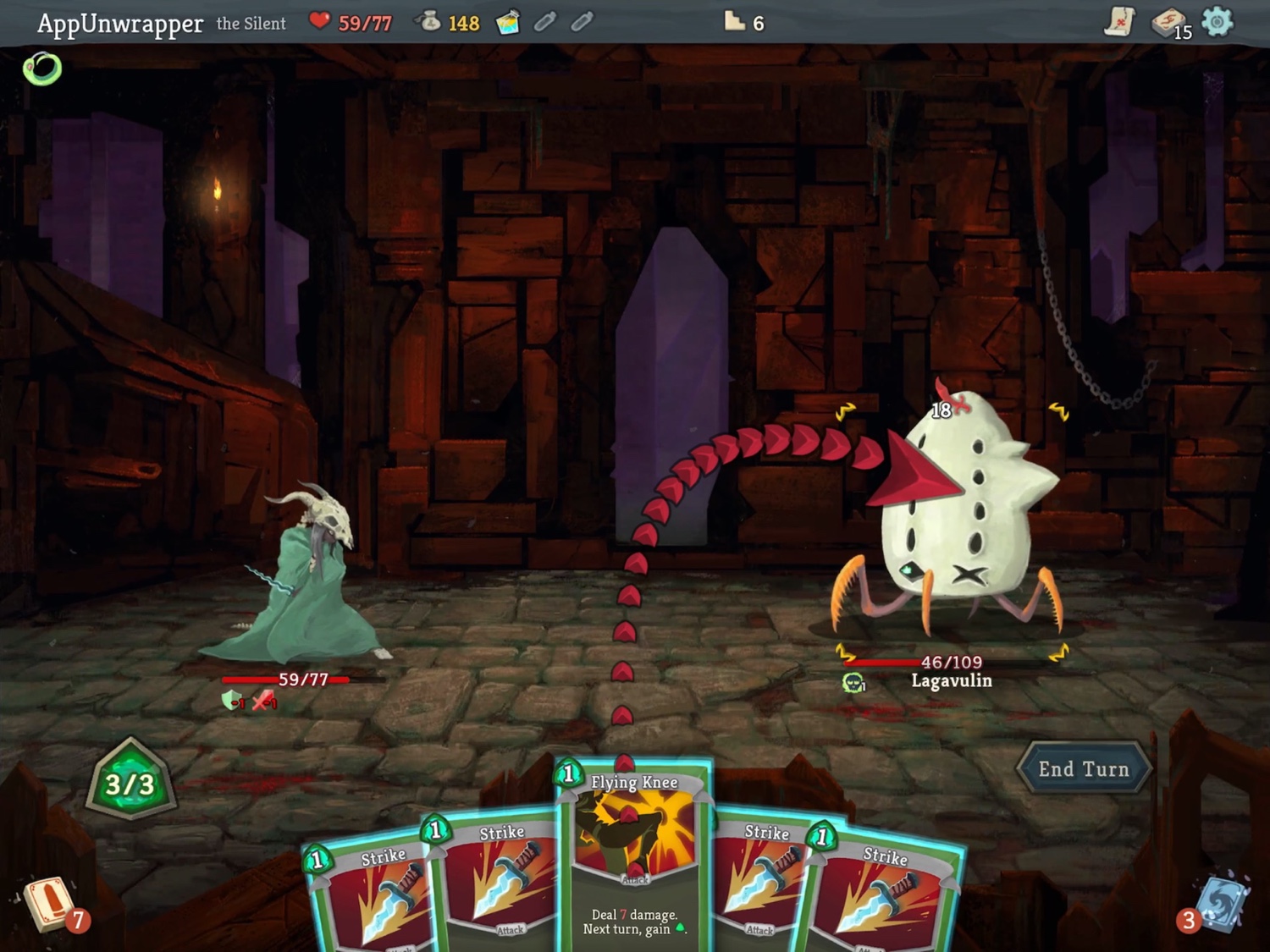 After each regular battle, you get to choose from three random cards to add to your deck, or refuse to take any. There are also Elite enemies that are sort of mini bosses. They’re much harder to defeat, but drop relics, which give you (usually) permanent perks, such as bonus strength or healing. So there’s risk involved in taking them on, but also great reward. Treasure chests found on the map also give you relics, so Elites aren’t the only way to get them, but you’ll be at somewhat of a disadvantage if you skip all the Elites. You’ll also encounter rest stops that give you the choice to heal for 30% of your max health or permanently upgrade a card. And the last two possible encounters are the merchant that sells you cards, relics and potions; and Unknown, which could spawn a battle or a random event. Events vary greatly, but often offer you a choice that’s a gamble. So there’s a lot of strategy — as well as luck — in even the most basic decisions you make.

Now, the reason I said it’s not a pure roguelike but has roguelite elements is that after each game, you earn experience. After a certain amount of experience, you’ll unlock either three cards or relics that can show up randomly in your runs. There are only five sets of unlocks per character, but it’s still a grind compared to a game where each run is self-contained. You also have to play with each character to unlock the others. On top of that, there’s the Ascension mode, which allows you to increase the difficulty a little bit each time you beat it. Since you have to complete one Ascension level to get to the next, you could spend quite a few hours reaching the max difficulty — assuming you ever do. As someone who’s still getting a handle on the normal difficulty level, none of that has bothered me yet. I’m not a fan of grinding for unlocks in games, but at least it’s only a few cards per character here and not hundreds. So I think it’s pretty close to a roguelike and those who prefer roguelikes over roguelites shouldn’t be too offended. 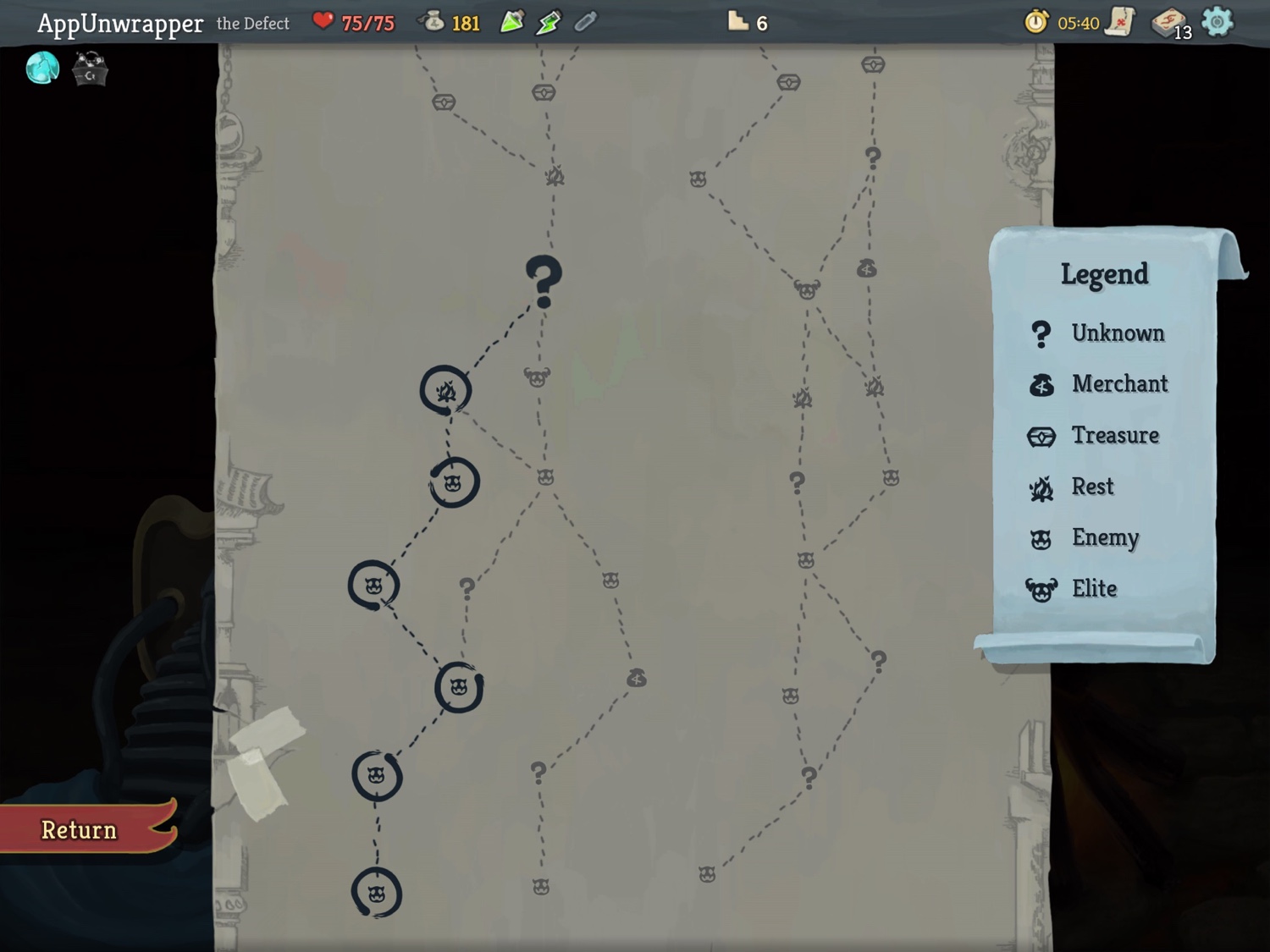 I’m a big fan of the daily challenges in Meteorfall, so I’m happy to see Slay the Spire has something similar called Daily Climb. Each day, you can play a game with specific modifiers that really change things up. It puts everyone on the same footing and also allows you to try out cards and characters you might not have unlocked yet. Just like the main game, the idea is to compete with others for a high score. Any experience you earn there adds to your total for that character and any new cards and relics you encounter are added to your compendium. So you can still make progress focusing more on this mode if you prefer it.

Now, I could get into more depth about the different kinds of cards and relics and both the luck and strategy involved. But since the game has been out on other platforms for several years now, I’d like to talk about the mobile port itself. The graphics look sharp and clear on both my iPad and iPhone, and even though they’re mostly lightly animated two-dimensional sprites, the heroes and monsters have quite a bit of character to them. But I do wish the controls and layout were better adapted for the platform. First off, your hand of cards are at the bottom of the screen. They’re cut off so you can only see the names and images. You’re supposed to be able to tap on a card to see its description, but this doesn’t always work. If you’re not very deliberate with how you tap, you could end up just dragging it part of the way and then have to spend more time fussing with it to actually see what it says. This is less of a problem on iPad than on iPhone, but I struggle to understand why it’s even necessary on iPad. There’s so much wasted space that could have been utilized better. If everything were just lifted up higher, I would be able to see all my cards at a glance without having to fumble with them just to read them. I can maybe understand why it’s necessary on a smaller iPhone, but I see no reason for it to be like that on a spacious iPad screen. 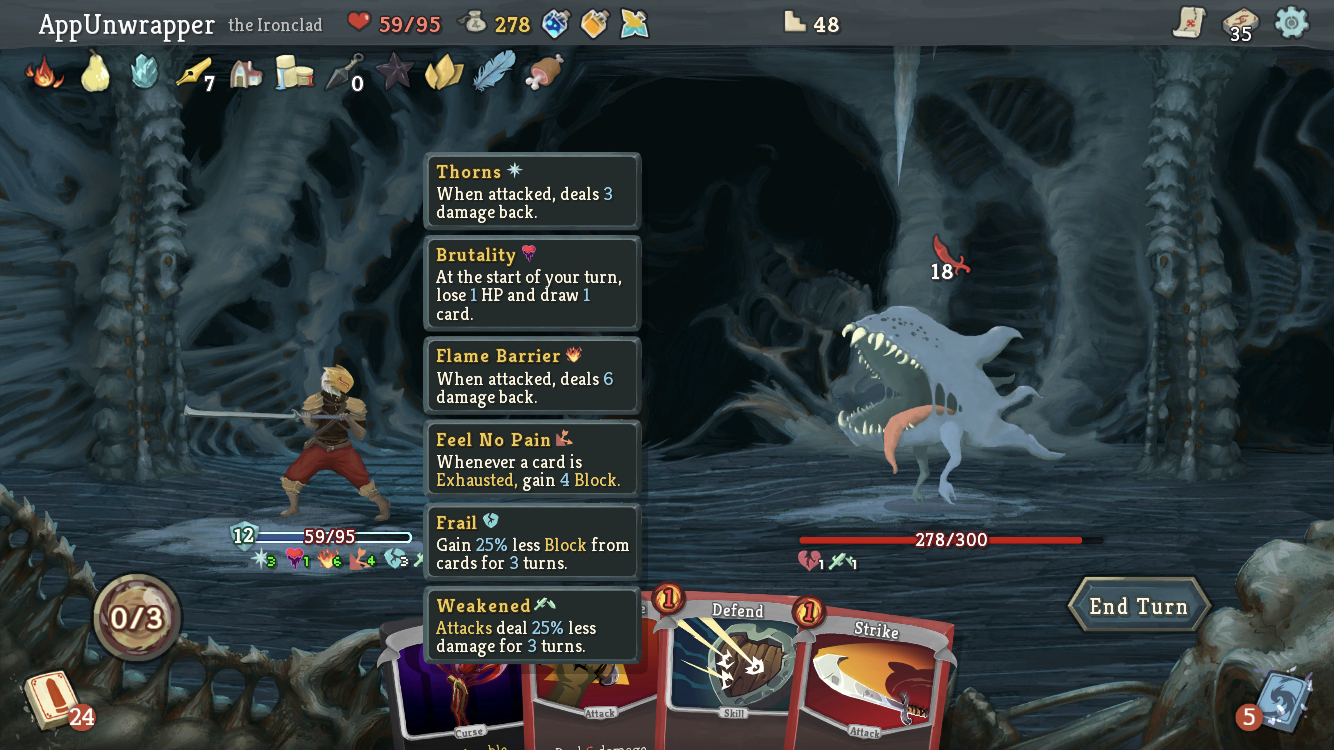 I also had issues with the interface, where I would be scrolling through cards and it would think I was selecting them. It’s usually not a big issue because you can just go back, but it makes the whole experience feel clumsy. You can avoid these issues by dragging the slider on the side, but it feels clunky on a touchscreen where you’re used to being able to drag anywhere. And while dragging a card to an enemy to use it on them works fine on iPad, I often struggled on my iPhone and had to try several times. You can still tap on the card and then on the enemy, so it might just require getting used to the control scheme that causes you less trouble. But I would still like to see all these things fine-tuned so they feel more natural and less clumsy.

On top of all this, perhaps my biggest issue with the iOS port is the lack of iCloud sync. Like I said, there’s quite a big grind, especially if you try to climb Ascensions. For a game that is intended to be played for hundreds of hours, it’s hard to excuse the lack of iCloud saves. It’s especially frustrating since anyone with an iPad would be crazy to play on their iPhone at home, where everything is squeezed onto a small screen. If you want to have a better experience while at home but also enjoy the game on the go, you have no choice but to have two separate save files going. Sure, it won’t matter for those who have only one device. But with Apple Arcade games being required to include iCloud sync, it’s becoming more and more expected. And a game that plays better on iPad than iPhone is exactly the kind you would want iCloud for. I know that I personally will spend less time playing because of this huge oversight. I hope the feature is added in an update, but if that’s important to you, you may want to wait. 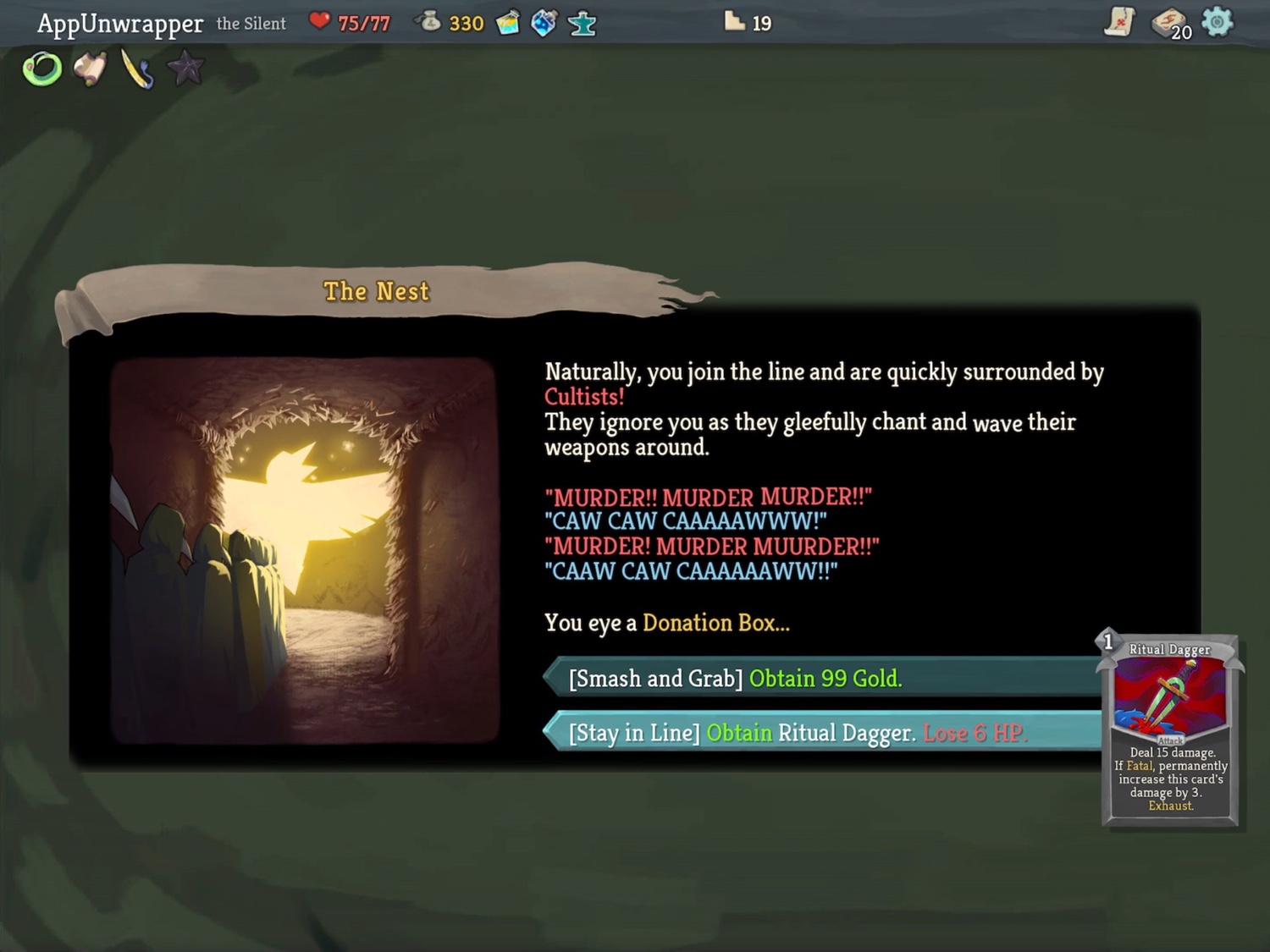 I’m thrilled that Slay the Spire finally made its way to iOS, and I can see why it has such a dedicated fan base. It’s a game that — forgive the cliche — is incredibly easy to pick up but hard to master. There’s a ton of depth and I can see how people end up investing hours upon hours of their lives to working out the perfect strategy. I don’t know if I will, but I can certainly see playing once in a while, especially the daily challenges. Those who have been impatiently waiting for it to come to iOS probably won’t care much about about the port’s shortcomings. But I do hope that my concerns are addressed to make the mobile version the best version of the Slay the Spire. If you’re ready to take the plunge despite its shortcomings, grab the game here and fight your way to the top!