Kosmonavtes: Academy Escape is the sequel to LKMAD’s adventure game, Kosmonavtes: Escape Reality. You have to help Vala graduate from Space Academy while her classmates play pranks on her. This walkthrough guide will help you if you get stuck on any puzzles in Chapter 2. Feel free to ask for extra help in the comments section.

You can watch my video for Chapter 2 or continue below for my step-by-step guide.

1. Pick up the three boxes. Then go through the door to another room.

2. Pick up two more boxes and then go back to the first room. Place all five boxes on the shelves.

3. Go through both rooms and note down the horizontal lines you find. There’s 3 in the word LEVEL (the second E), 2 on the first door, 4 on the second door, and 6 on the third door. Put them together to get 3246. Then enter those to unlock the safe on the shelf. Take the multitool.

4. Go back to the second room and use the multitool to open the floor. Take the box.

5. Use the multitool to open the panel on the door to the right. Remove the burnt fuse. We’ll come back to this.

6. Go back to the first room and place the final box on the shelf. Now we have to figure out the order they should go in. In the second room, there’s paint over the two doors and between them, in the same shapes as those on the boxes. Use those colors to figure out which boxes should go where. Then take the printout. 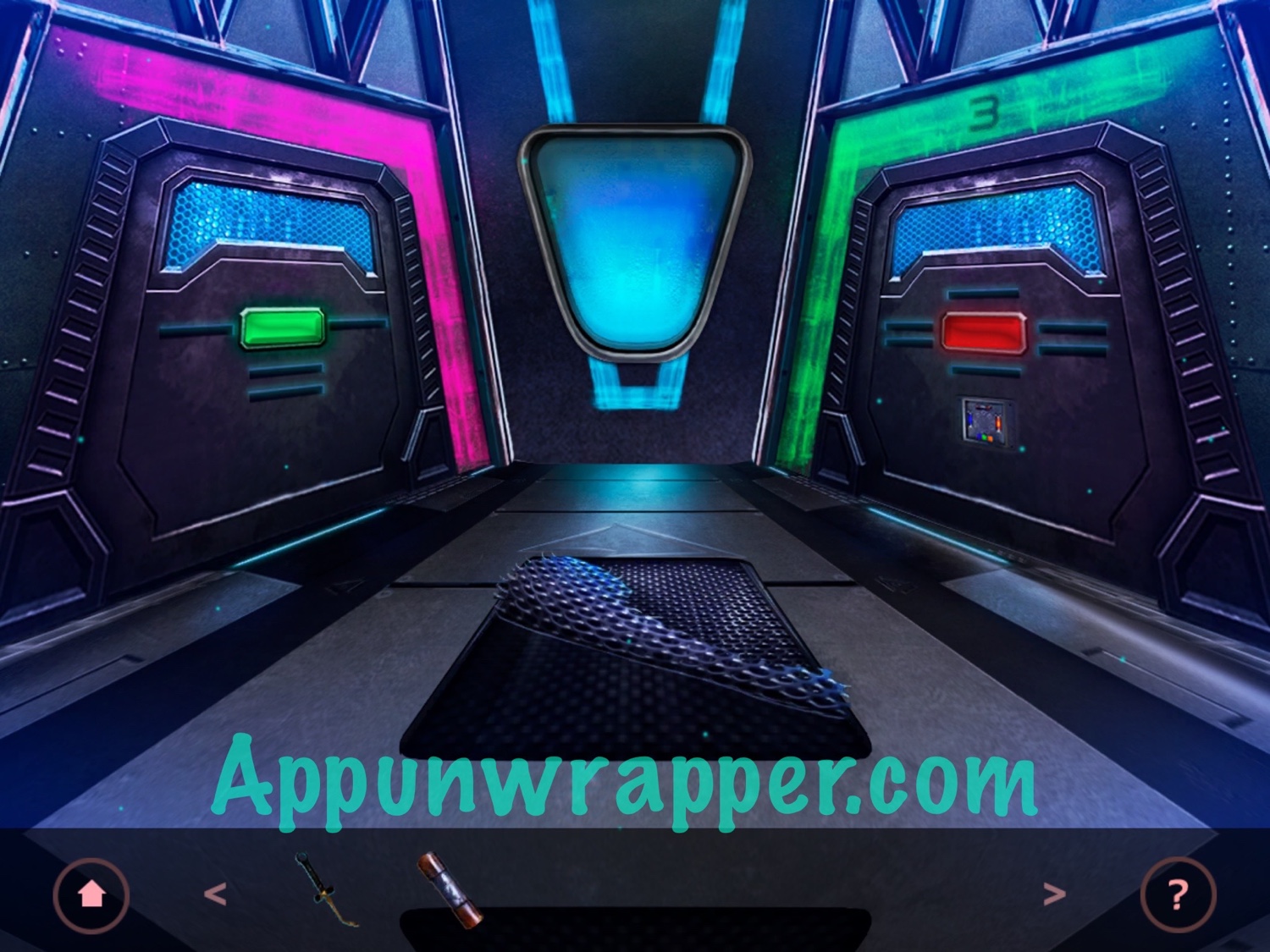 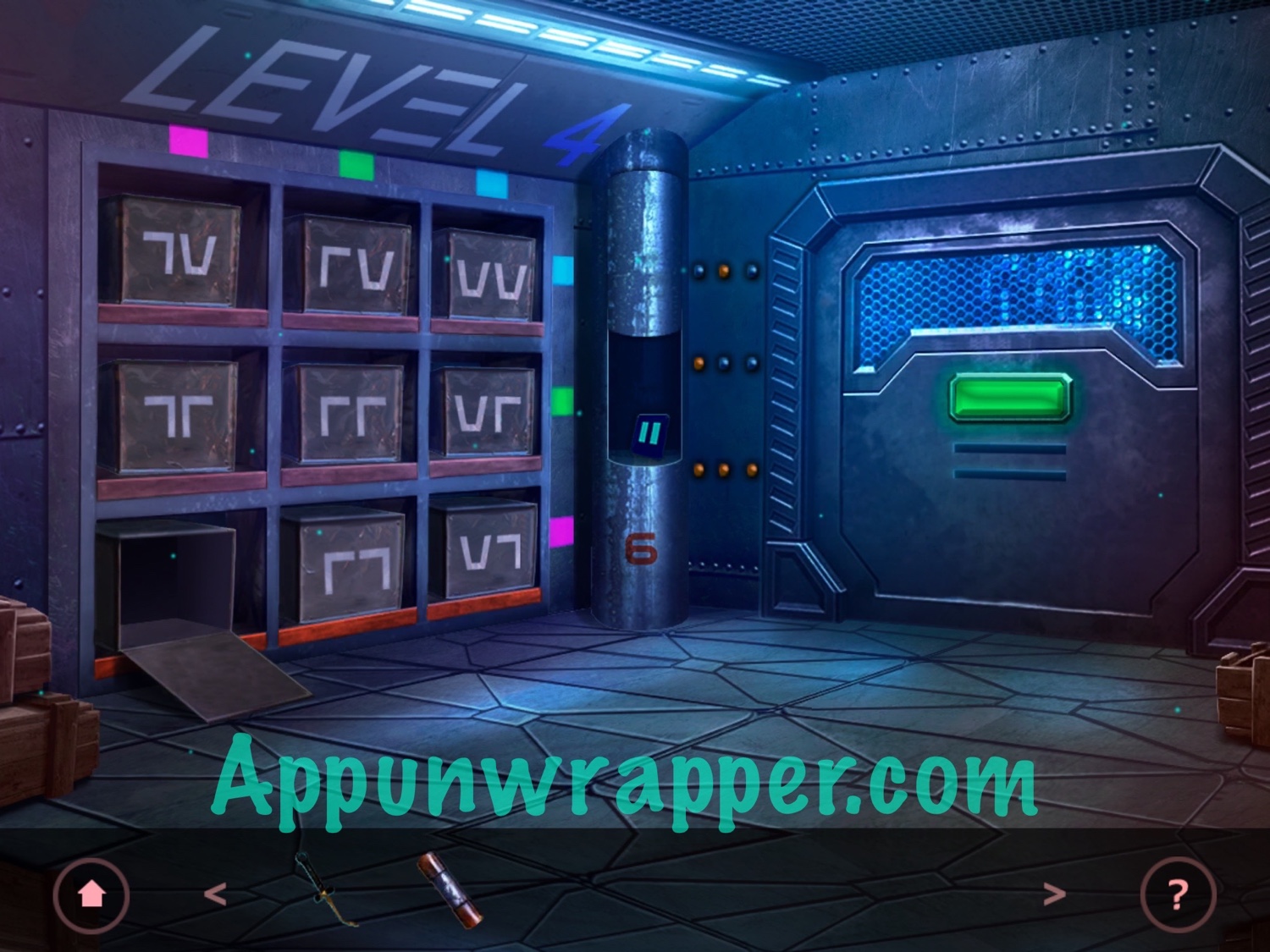 7. The printout has two blue marks on it. So use it to open the box in the space where two blue squares meet. Take the tablet.

8. Use the tablet on the spot where you got the printout. Notice the lights lit up to the left of the door. Press those same spots on the tablet to get another printout.

9. Use the green printout on the box where the two green squares meet and get the 3D printer. Place it where you found the original printout.

10. Tap on the printer. Solve the puzzle by changing the colors of the buttons so that each wire connects the same colors. We need to figure out the order, though. The clues are the colors that go vertically along the shelves — Blue, Green, Pink, Orange. So set the left side in that order and then find the linked buttons to match to them. 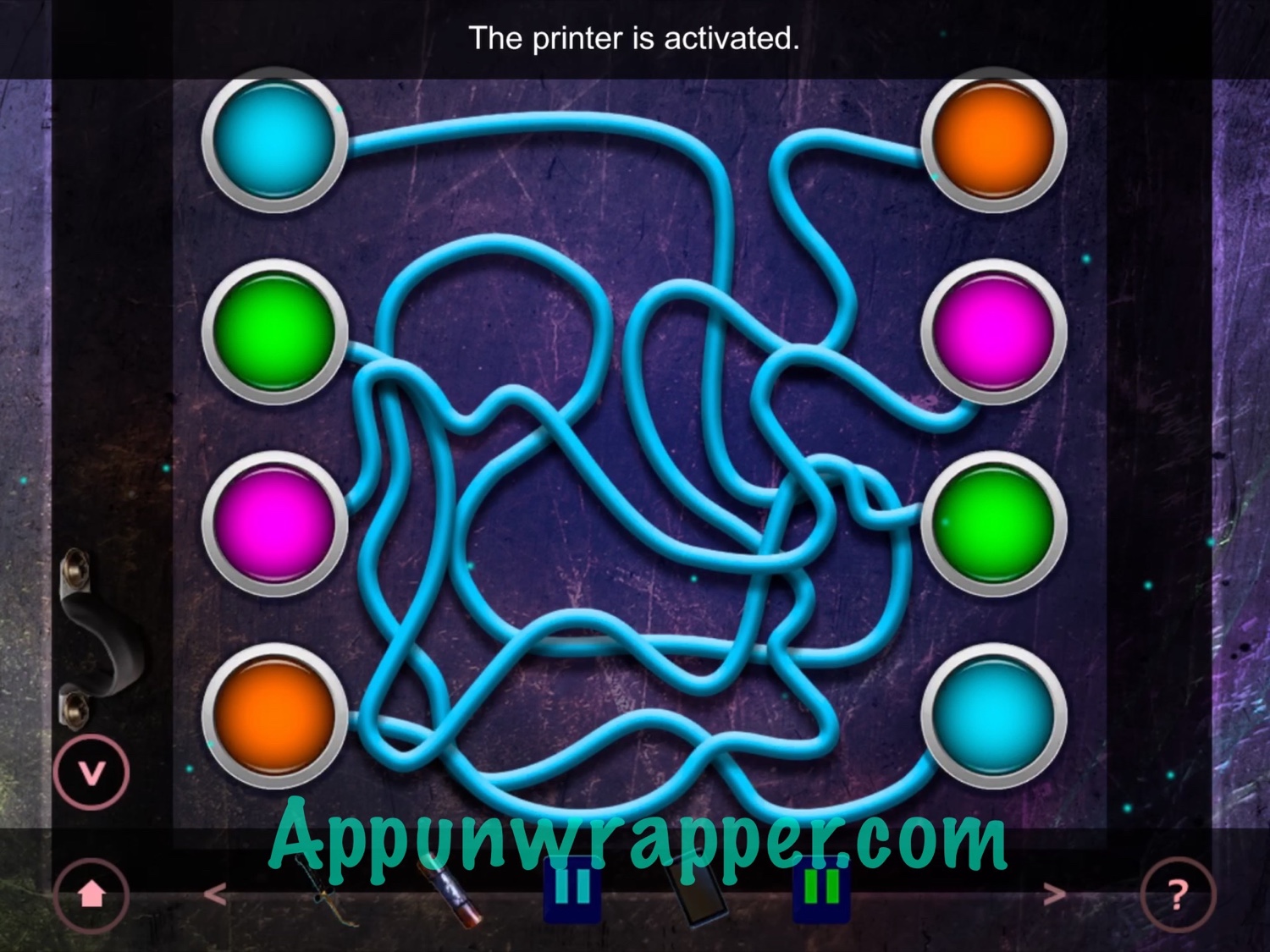 11. The printer is now activated. Place the broken fuse inside to get a working fuse.

12. Go back to the door and place the fuse with the others. We now need to split up all the numbers so that each color adds up to the same amount. Use the numbers from around the level to figure out which colors to use for which numbers. There’s a blue 4 in the first room, an orange 6 in the first room, and a green 3 on this very door. So it should look like the photo below in the end, with each color adding up to 15. 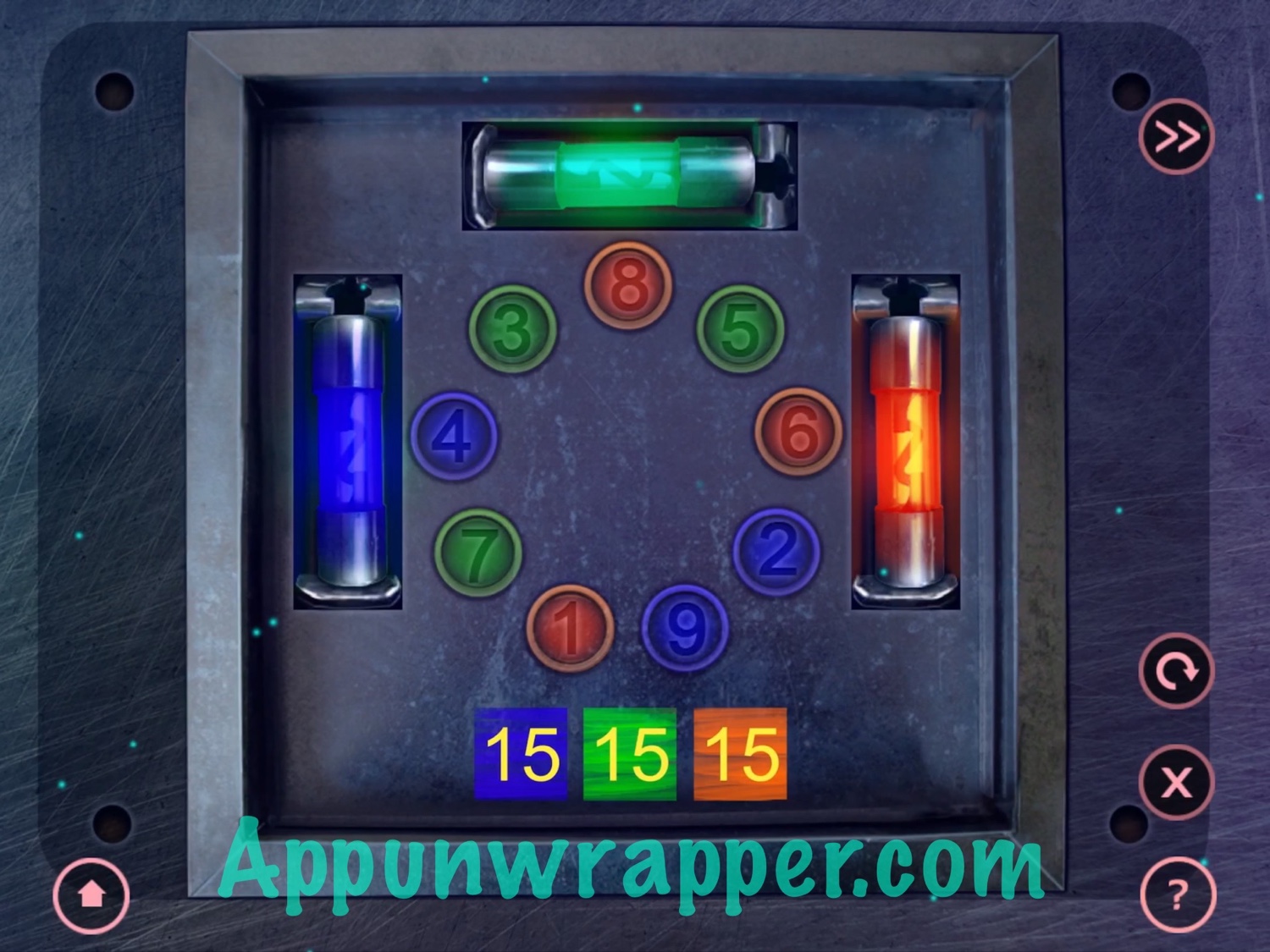 13. We need a spacesuit to open the airlock. Use the tablet to scan the airlock and it will print another printout. Use it with the box in the lower righthand corner, since that’s where blue and pink meet. Take the spacesuit.

14. Use the spacesuit to open the airlock. A window breaks at the same time, and broken glass tears your suit.

15. Use the three printouts together with the multitool to patch up your suit.

16. Collect all the insulation and glass pieces around the room. Also, use your multitool to break off the metal grate.

17. Zoom in on the broken window. Place the metal grate down as a support. Then place the glass pieces down and move them into place. Add the insulation. Then use the multitool to seal it. Go through the airlock to complete the chapter! 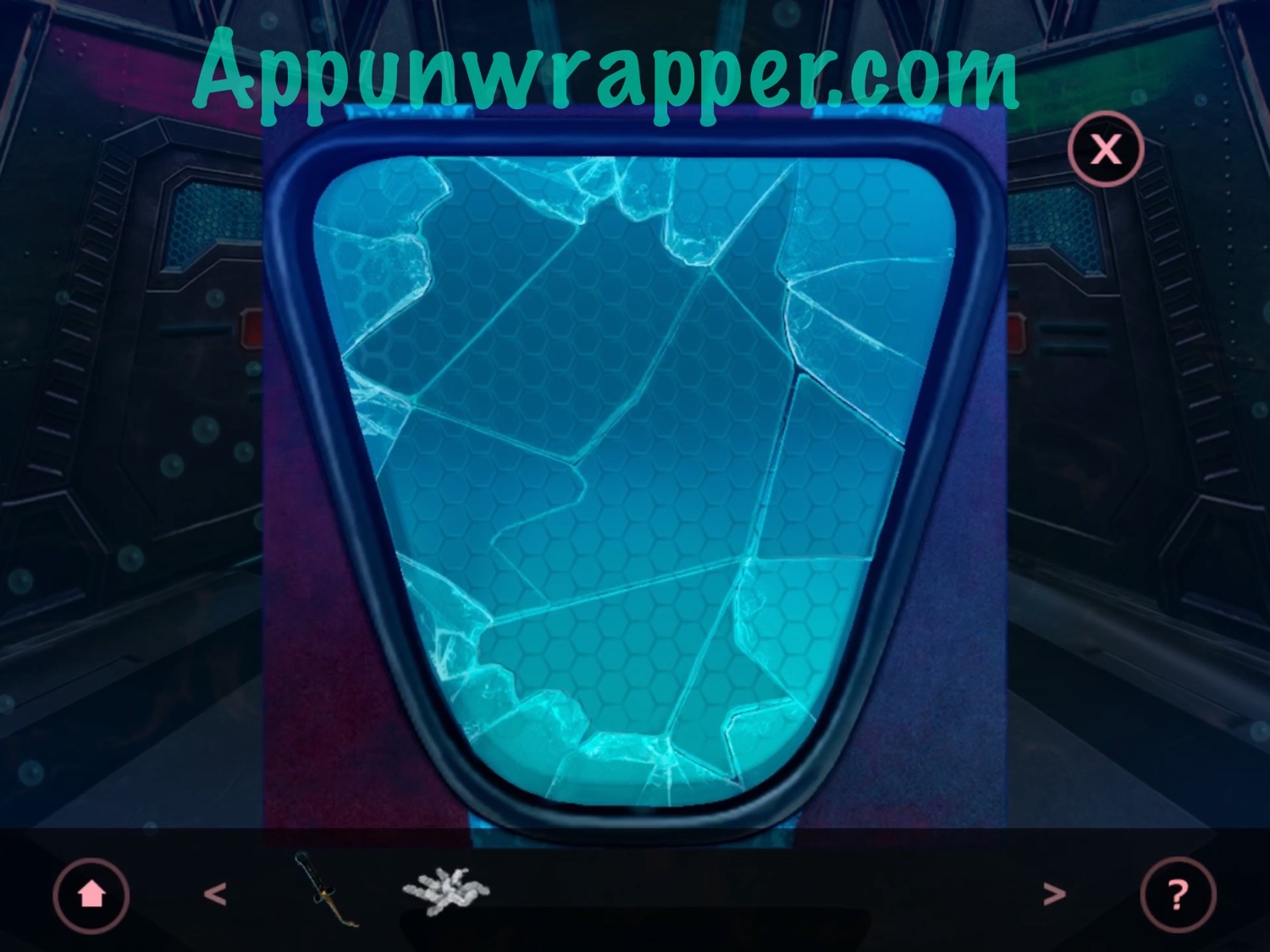 And that’s the end of Chapter 2! Click here to continue to Chapter 3 or choose a chapter below.