At first glance, SPHAZE appears to be everything I could want in a puzzler — gorgeous Monument Valley-inspired low-poly graphics, one-handed portrait play, and simple touch controls. The name comes from the combination of “sphere” and “maze” and has you solving round labyrinthine mechanical puzzles. You’re guided by a cuddly little robot called RoBeep who you must help through each maze, along with his robot friends. It starts off promising and and I was looking forward to spending some quality time with the game. But the more I played, the more frustrated I got, and eventually gave up on trying to complete it, even though it’s not particularly long.

The basic idea isn’t new; you’ve probably seen puzzles like this in any number of adventure games. You have three discs that you rotate until they form a continuous path from the outside to the center. Then you drag a little robot to the starting position and watch it run to the exit. One thing to remember is that robots always take the right path if there’s a fork in the road. Before long, you’re working with buttons that open and close the exit, exploding starting positions, walls, collapsible columns, and even numbered buttons that have to be pressed in ascending order. I like that new mechanics are added so frequently to keep things from getting stale, and the environments are certainly eye-catching. I especially appreciate how some levels have interactive elements in the background that you can play with for extra entertainment and to earn hidden achievements. 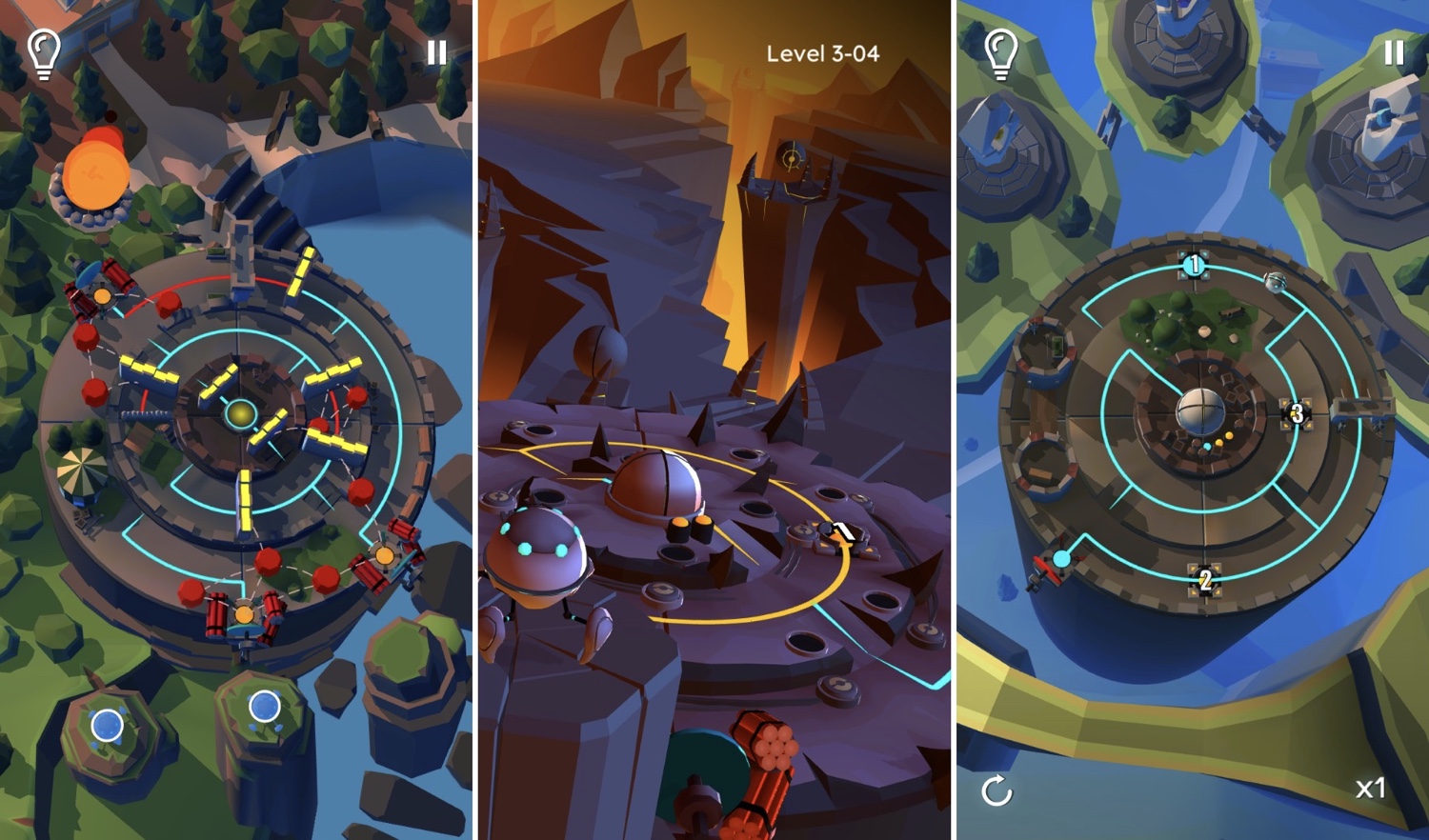 But already on the second of four worlds, I was losing patience with the game. The main reason for this is that sometimes you’re meant to move the discs while the robot is already on the board. This isn’t always an issue, but when there are buttons that they run over that open and close doors, or exploding start positions together with red paths that kill the robots, it becomes less methodical and more frantic. The robot doesn’t stop moving when you grab a disc to turn it, so you have to be extremely careful about how the paths line up while you’re rotating them. The robots revive if they die, but some other puzzle elements don’t refresh, so you have no choice but to restart if you mess up. This is especially frustrating if you felt you were on the right path and just wanted to fix your solution a bit, but now you have to get everything back into position and start over. It’s an even bigger issue on an iPhone, because all the details are small and harder to make out than on an iPad. That makes me wonder why it’s in portrait mode, since that implies it was designed to be played on an iPhone. 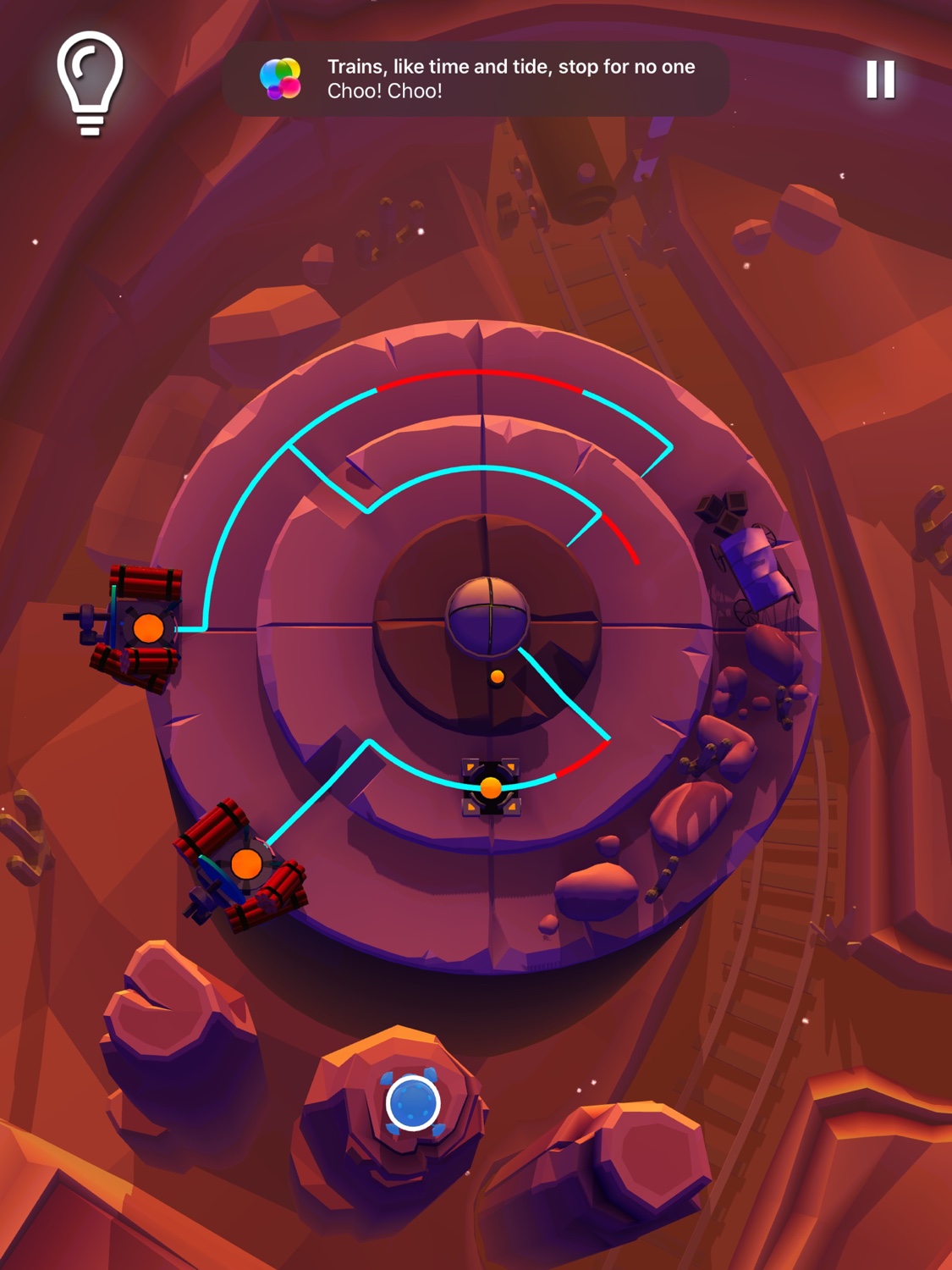 What especially bothers me about the need to move discs while the robots are moving is that it’s rarely obvious from the start that you even need to do so. There isn’t any clear sign that a puzzle might not be solvable through strategy alone. It only really occurs to me to try it after I’ve already exhausted all other options, which makes for a very tedious experience. It also means there are a number of puzzles that I’m not even sure how I solved, because I was just spinning discs until the robot finally got to the exit. It wasn’t satisfying, and I find it hard to repeat what I did since I’m not actually sure what that is. Still, I stuck with it and managed to complete the second world and even some of the third. But then I encountered orange paths that disappear once a robot walks over them once. Here’s where I got especially annoyed that there’s no way to undo a move instead of resetting the whole board. It’s very easy to get stuck with no path left for your robot to walk on. Without either the ability to stop the robot in its tracks so you can think or a way to at least go back to before you dropped that last robot down, the game becomes far more frustrating and tedious than I want from my puzzle games. 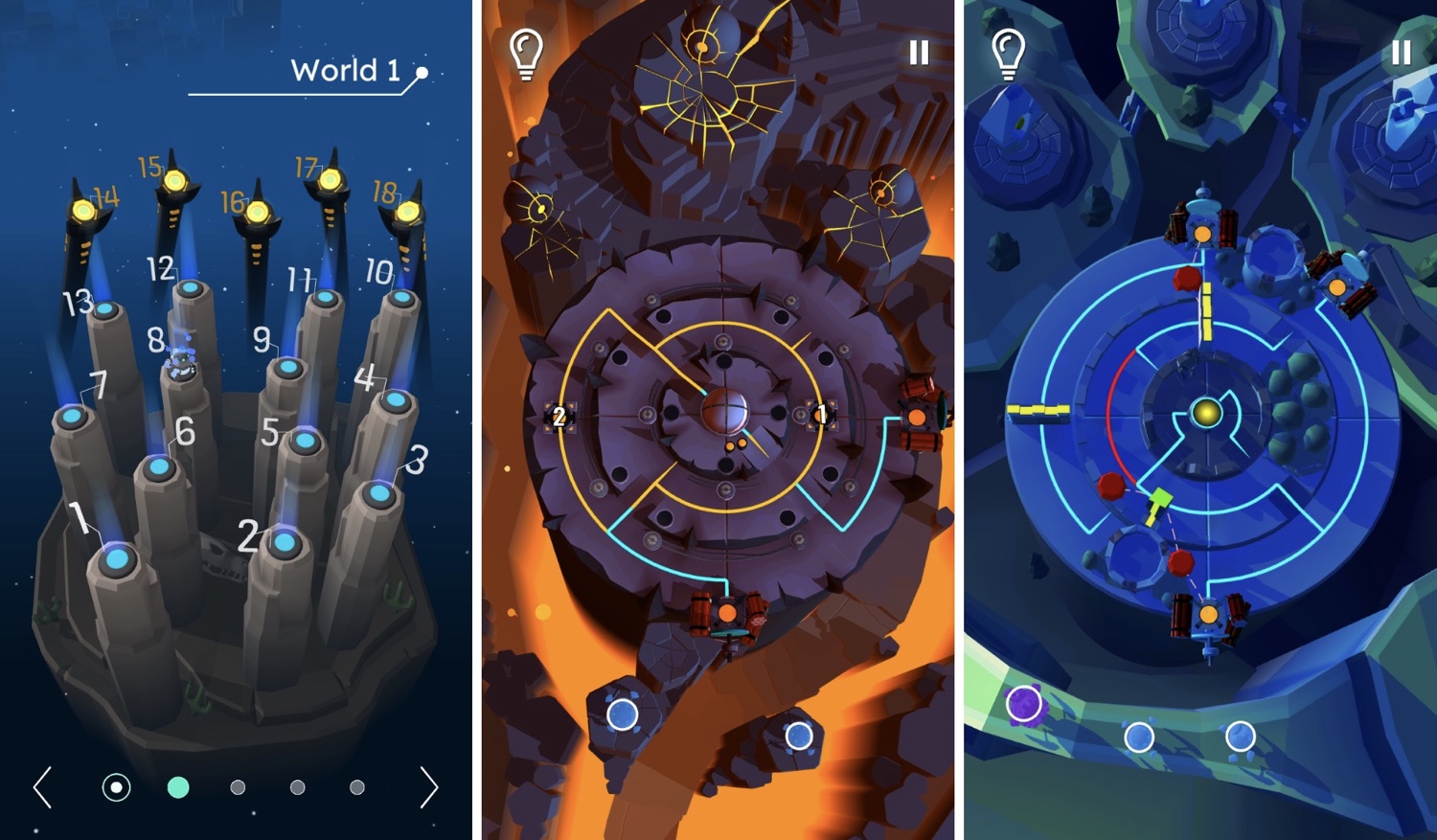 SPHAZE is also hyper-linear in that you must play all the levels in order. The only exception is the bonus levels that are unlocked after you complete a map. But I haven’t even tried any of these, as there’s an awful CRT effect on them that hurts my eyes too much to look at. The developers said they’ll remove it in an update, but as of now I can’t even comment on the quality of those bonus puzzles themselves. They’re also the only way to earn extra spare parts without purchasing them, which is the currency used to buy hints. I don’t want to use hints anyway, but I think it’s odd to give them out only after solving the hardest puzzles. That’s like offering an easy mode only after someone completes a game on the hardest difficulty. I also wish the game was less linear so I could skip a puzzle if I’m stuck on it. You can pay $1.99 to unlock the next world, which I eventually did since in-app purchases are free through TestFlight. I wanted to see what the fourth world was like before I quit on the game altogether. Normally I wouldn’t do so, as I find it disagreeable to pay to unlock content early and wrote about it at length here. 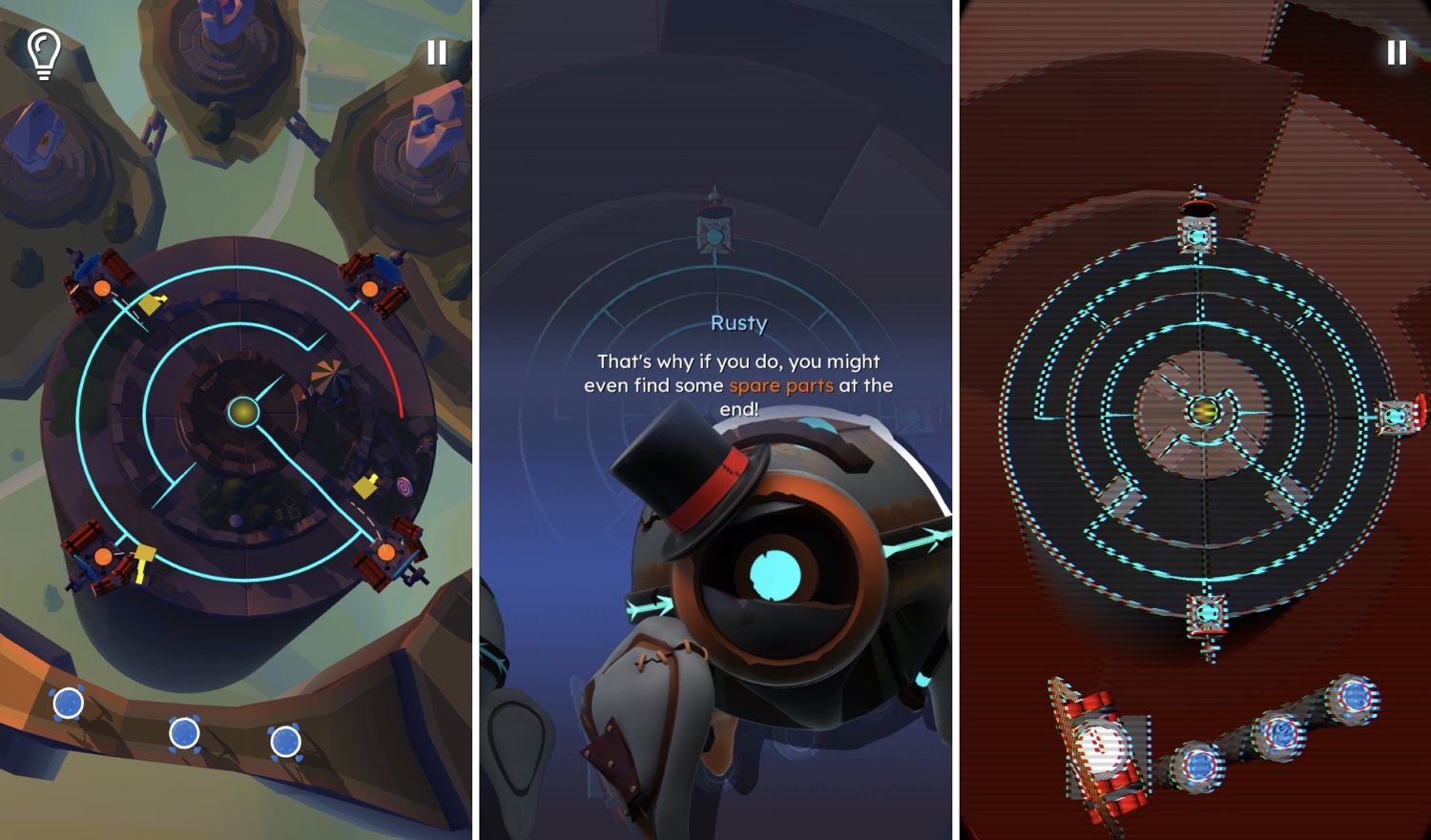 The fourth world is very different from the rest of the game, which makes it even more absurd that it’s locked behind all the other levels. Instead of a circular maze, you now have one with sharp corners and it’s cut up into tiles. Instead of spinning a ring, some tiles are fixed in place, while others are attached to each other and shift when you drag them. But one huge difference with the fourth world is that every puzzle appears to require movement while the robot is already on the board. There’s no question about it, because you can’t make a single continuous path from the starting point to the exit. But unlike the round mazes, the robot stays put if you’re moving the piece he’s on. Because of that and the sliced-up nature of these puzzles, you can usually strand him on a single tile while you think about what to do next. That makes the fourth world feel more balanced than the rest of the game, and I already got farther in it than in the third world. I still don’t know if I’ll stick with it, though, as those vanishing paths really get on my nerves. 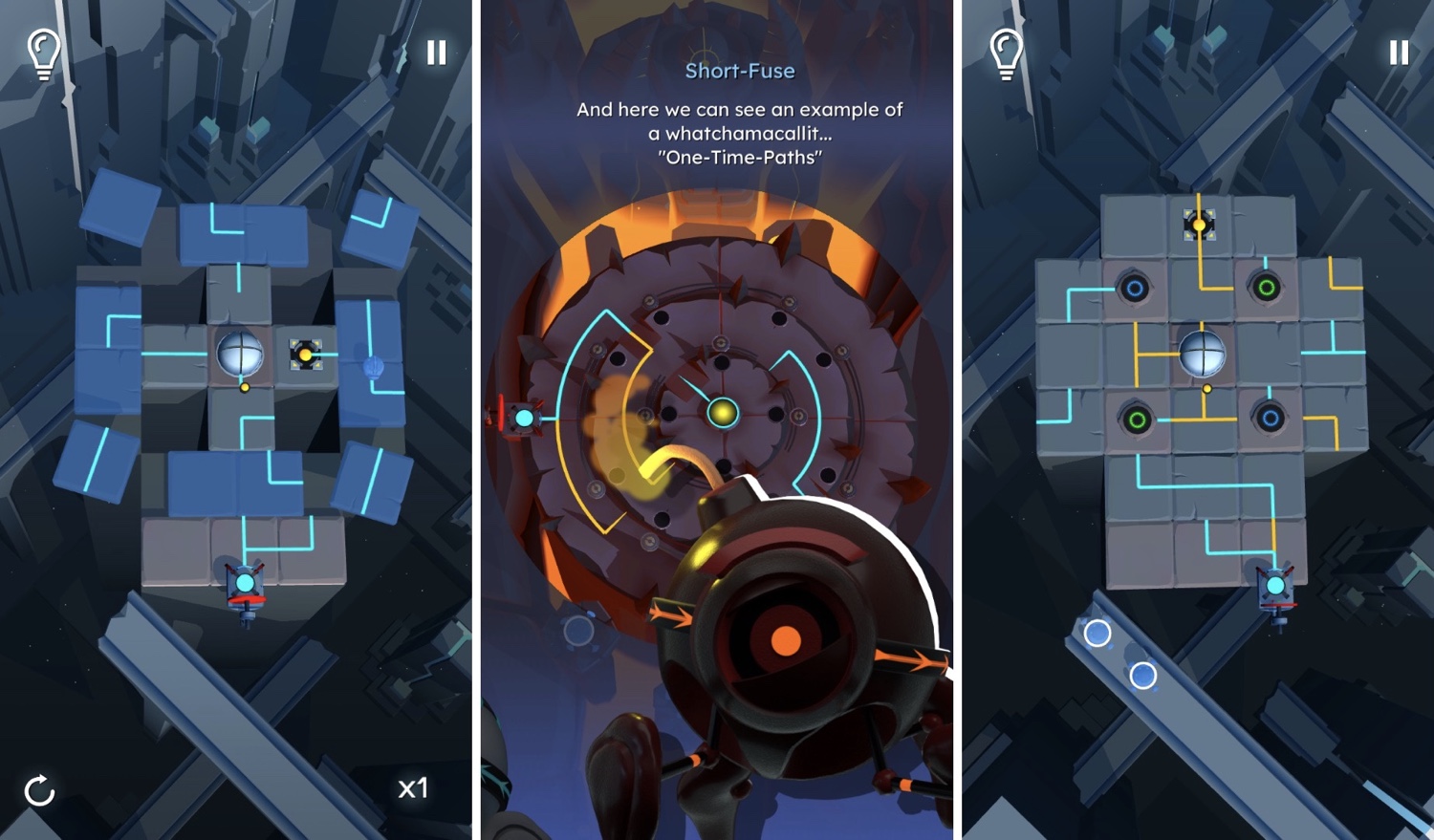 It’s obvious a lot of work went into making SPHAZE, and it certainly oozes quality. Perhaps with a few changes it might even become a rewarding puzzler worth recommending. But as is, I’m not sure it has a target audience. Those who like thoughtful, relaxed puzzlers will be turned off by the need for quick adjustments. And those who prefer their games more tense probably won’t be all too interested in a puzzle game like this to begin with. It doesn’t help that the game uses its hyper-linear layout to try and make more money off players that already paid for the game. If none of this bothers you, by all means grab SPHAZE here and help the robots through the maze.