I’m a big fan of the classic point-and-click adventure series, Broken Sword, and even still have my copy of the original on Game Boy Advance. But for some reason, I never played Revolution Software’s earlier game, Beneath a Steel Sky, which released 26 years ago. It’s been on iOS for while now, but as a spoiled modern gamer, it always looked a bit dated to me, and I just ignored it. So as much as I was looking forward to playing the sequel, Beyond a Steel Sky, on Apple Arcade, I was also a bit worried that I wouldn’t be able to enjoy it without the context of the original. But those concerns melted away after just a couple of conversations with the local Gaplanders. This is a solid adventure game that stands on its own and just oozes charm in every detail.

Beyond a Steel Sky takes place ten years after the first game ended and you once again assume the role of Robert Foster. It starts with the kidnapping of a young boy Foster knows, which leads him through the desert and towards the gates of Union City. Here you meet some Gaplanders, the people who live outside the city, and need to find out as much as you can from them, perhaps barter for some useful items, and find a way inside. Though this itself involves a fair bit of problem solving and character development, it’s only just the beginning of a jam-packed journey that takes you all around Union City, unraveling the mystery of the kidnapped child and learning what happened to Joey, the sentient robot Robert built when he was young and then left behind to turn the city into a utopia.

An adventure game lives and dies by its puzzles, and with Beyond almost all of them are fun to work out. Much of this is due to a tool that Robert picks up early on in the game, which allows you to hack certain machines to make them work differently than intended. For a non-spoiler example, there are Spankles soda vending machines in every part of the city. If you scan your ID chip, they’ll usually give you a can. But if you try to tamper with them using your crowbar, an alarm will go off. You can instead hack one so that it dispenses a can when you use your crowbar and the alarm goes off when you use it normally. These puzzles get more complex as you progress through the story, and all the machines you hack together need to be close enough that you can reach them all at the same time from one location. Sometimes you’re even working with moving targets and need to figure out how to get them to come to you. Besides that, it’s also just fun to mess around with it and see what’s possible to pull off. In fact, I got into a bad habit of hacking before I even had a reason to and would make a mess of things. Thankfully, there’s an option to reset the area if you want to fix the mess you made. 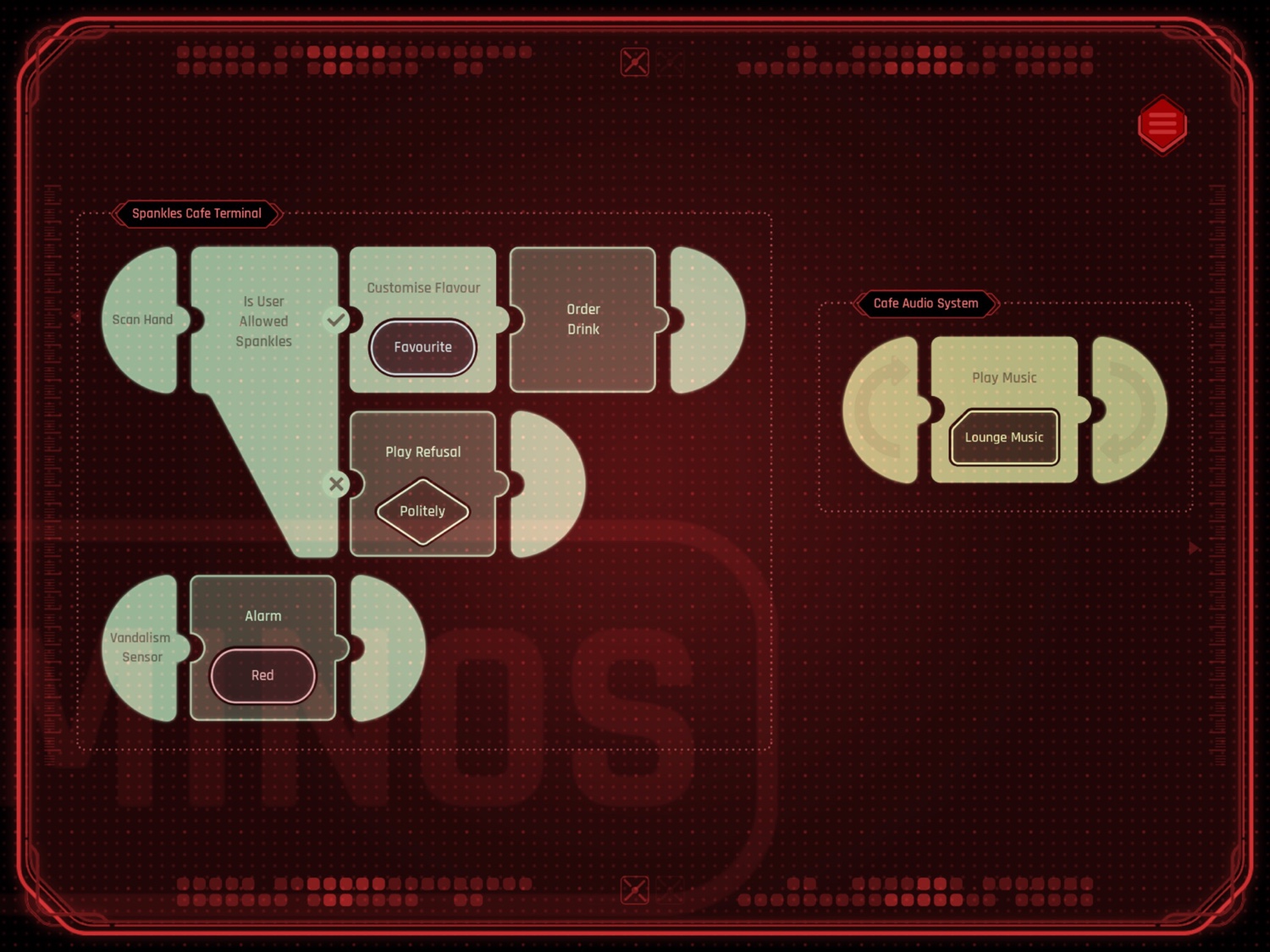 Besides the hacking tool, you can expect the usual inventory-related puzzles, as well as information gathering from both non-player characters and your environment. And, as with the classics, certain items will elicit humorous responses from characters. I recommend taking your time with the game and truly exploring all your options instead of trying to race through to the end. Some of the best conversations I got were due to digging deep into the dialogue trees instead of walking away once I had the information I needed. Everything is fully voice-acted and each character — even Greta the information booth hologram — is full of personality. I don’t always have patience for games with tons of dialogue, but in Beyond I just couldn’t get enough of it.

These days I don’t have a lot of patience for games with endless amounts of dialogue, yet I find myself digging deep into the dialogue trees of #BeyondASteelSky to get gems like this. I hesitate to rush through any conversations in case I miss the really good bits. pic.twitter.com/JR5mHybYFZ

I also appreciated that the inventory system didn’t waste my time. I’m sure every adventure game fan is familiar with that disappointing moment where you try to combine different objects and just keep getting the same message, something like “I don’t think that’s right.” Beyond deals with this by only allowing certain items to work in any given situation. Some might find this limiting, but I prefer it over the alternative. There are still some items that can be used almost anywhere just to see what happens, and I think the hacking device makes up for any loss in inventory experimentation. 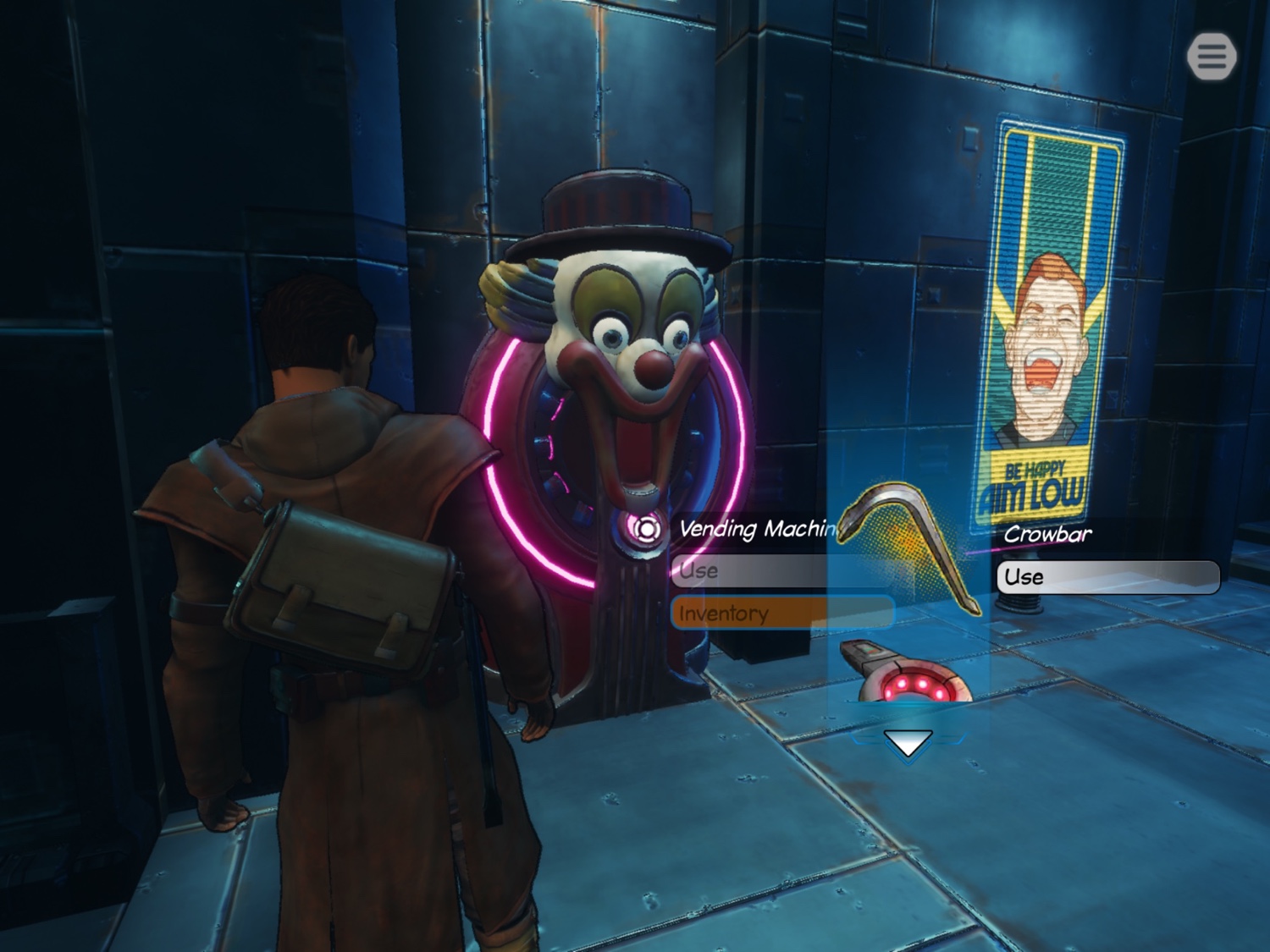 I also loved all the little details throughout the game. This futuristic world has holographic billboards all around the city that each cycle through a number of different ads. There are messages like “Be happy, aim low” and “Get with the bottom dwellers,” since the citizens of Union City have a warped sense of achievement. You can learn quite a bit about this civilization from the ads and I would sometimes just stand still for a while and try to read them all.

On top of that, most labor in the city is done by robots, and they each have a clever name that you would only really see if you scan them with your hacking device. There’s the N01T-AL information d-RYD (read as “droid”) in the museum, the 5H0-UT announcement bot, and perhaps my favorite of them all, the F4R-T vermin exterminator. It’s easy to overlook some of these details if you’re not watching closely, so I suggest playing the game at home when you can really give it your undivided attention. It also pays to keep a close eye on things because there are a few branching paths that lead to small changes in the story.

Now, let’s talk about the controls, since this is obviously not a 2D point-and-click adventure like the original. I only played on my iPad with the touch controls, so I can’t speak to how it plays with a physical controller. There are thankfully no on-screen buttons. Even the joystick that you use to walk around is invisible, so there’s minimal clutter on the screen. You swipe the left side to move and the right side to adjust the camera. To run, you double-tap the left side of the screen, which is not ideal. Thankfully there aren’t many instances where you have to worry about timing, so it’s not too much of a problem. You also double-tap on the right side to pull out your hacking device, which you can then walk around with to scan for things to hack.

Objects or people you can interact with will have a little circle pop up near them. When you get close enough to that circle, it will fill in and then you can choose an option from a drop-down menu, such as “examine” or “talk” or “inventory.” The catch is that you need to focus the camera on that object, which is a bit of a clunky way to deal with it, as opposed to just tapping on any object within view. But after a little while I got used to it and it wasn’t much of an issue. I think the developer even improved those controls in an update so they’re less finicky. The bigger issue with this is that it’s easy to miss interactive spots in larger areas since there’s no hot spot locator. This, together with some other details meant that a couple of puzzles were a bit too obtuse, requiring the player be incredibly observant. 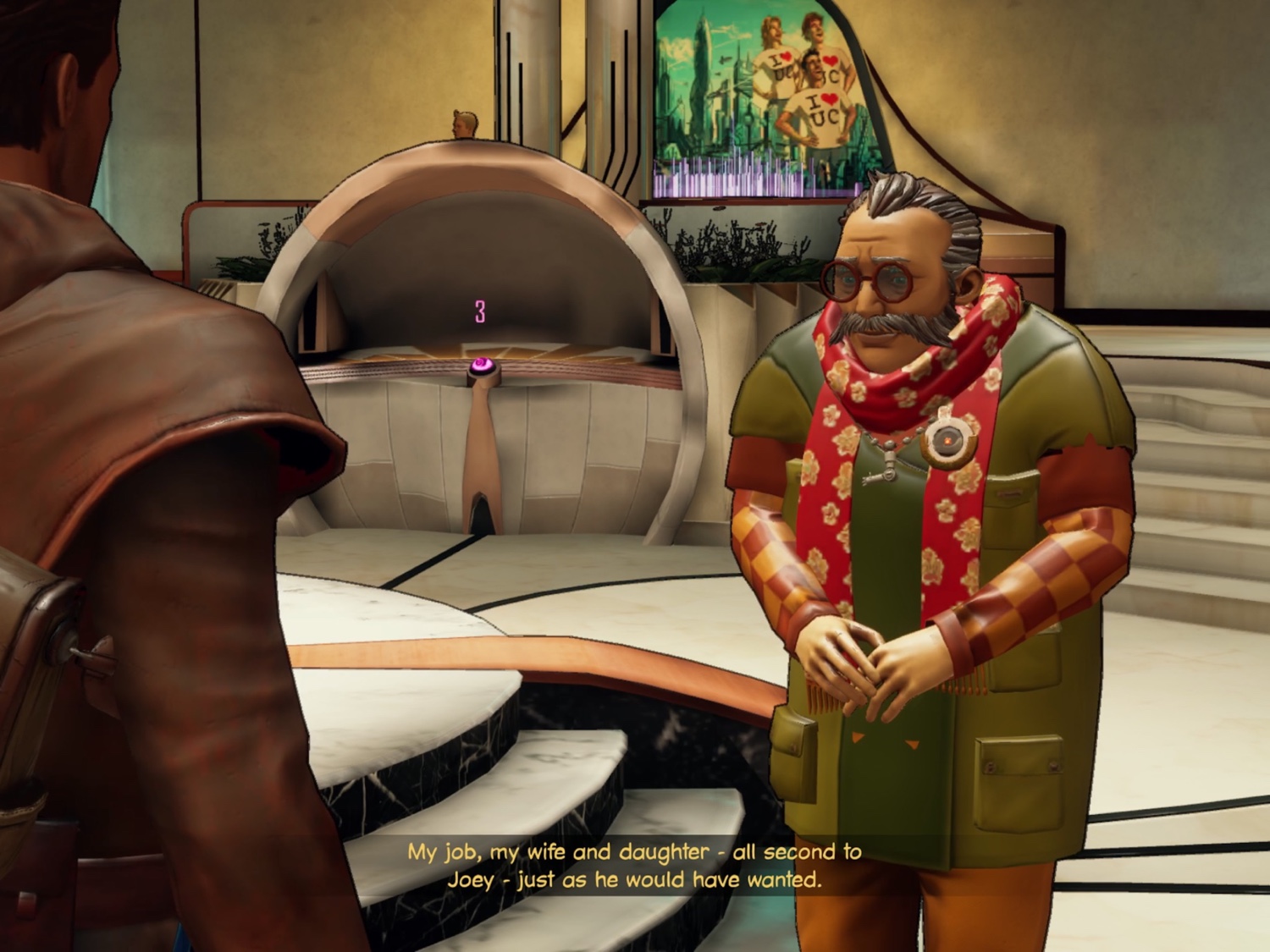 One concern I had going in was that I might get motion sickness from the controls, since most 3D third person games are a problem for me. But I’m happy to say and impressed that I spent over ten hours with the game and never got even the tiniest bit of motion sickness. Even moving the camera around a lot to line up the reticule with objects didn’t cause any problems. I’m not sure how they did it, but I wish other developers would learn from them. It made such a huge difference that I could play for long sessions instead of having to stop after twenty minutes due to nausea.

Now, as much as I loved the game, not everything is bliss in Union City. The game has been hampered by bugs since day one, from big ones like the game not even loading at all on the new iPhone SE to smaller glitches like not being able to pick up a sandwich. The developers have been working close with players to iron out these bugs and create a smoother experience. The SE bug has already been fixed, as well as some others, like the addition of dynamic shadows on more devices. But it can break immersion when you’re running around trying to figure out what you missed and it turns out it’s a bug. You can fix many of them by reloading an older save point, but first you have to realize it’s a glitch in the first place. There are also no achievements at the moment, and with all the Easter eggs and alternate paths, I find it hard to believe that there won’t be at some point. So between that and the bugs, you might want to wait for the game to be updated a few times before playing it. I don’t blame you if you’re impatient, as it’s a testament to the game’s strengths that I refused to stop playing even with the bugs I encountered. 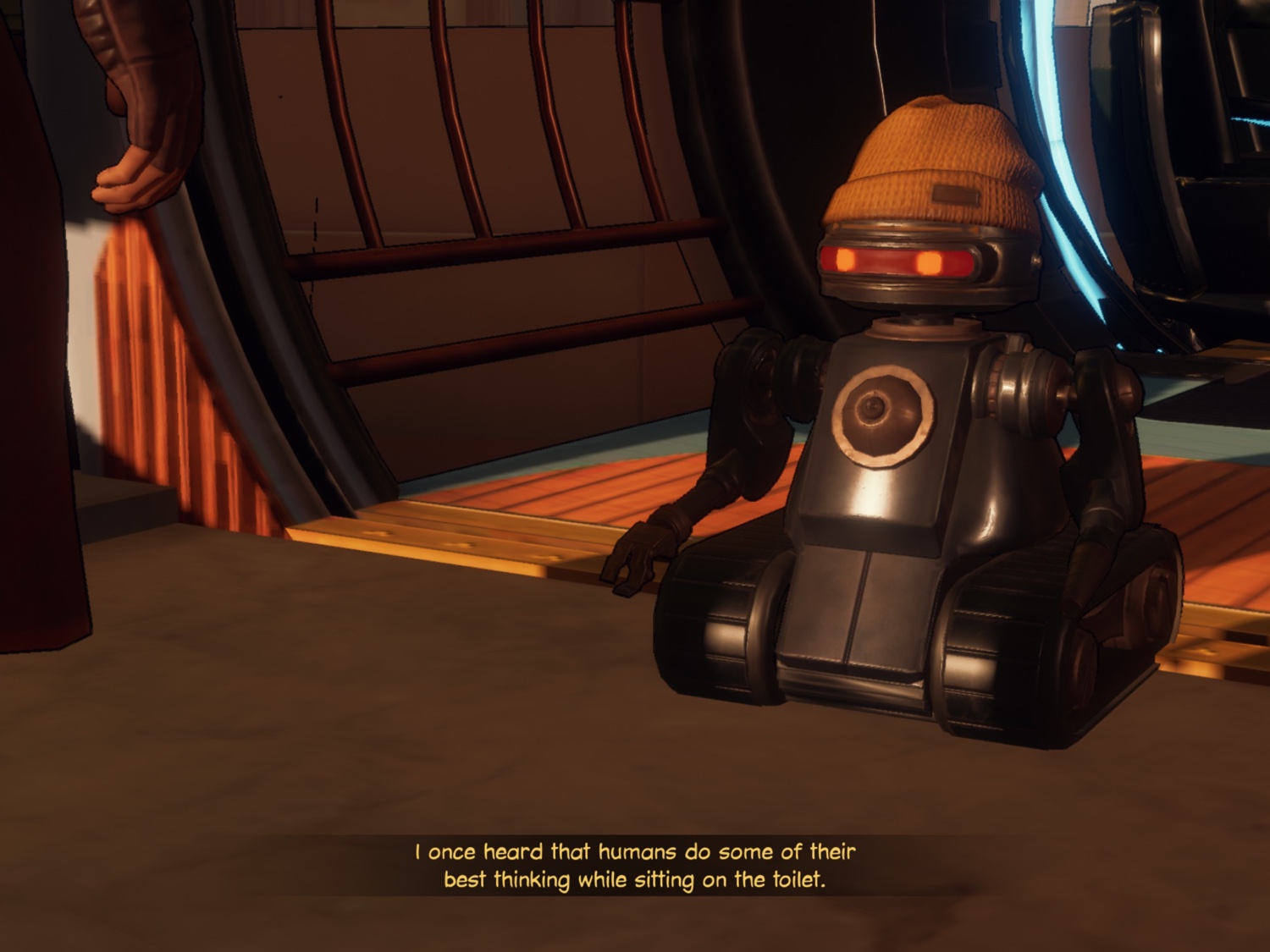 Whether you’re familiar with the original or not, Beyond a Steel Sky is a must-play for any adventure fans. It takes the tried-and-true formula of classic point-and-clicks and adds new mechanics to make it feel fresh and modern. If you’re not in a rush to play, it might be worth waiting for the remaining bugs to be ironed out. But if you have the patience to deal with them, just dive right in. This is the full package, combining clever puzzles, rich environments, playful tools, an exciting story and interesting characters all into one solid game. If I didn’t already have Apple Arcade, I’d be happy to spend a few Qdos to get access to Beyond a Steel Sky. So grab the game here and figure out what exactly has been going on in Union City all these years.

In Fear I Trust: Walkthrough