I know I say this a lot and some of you may be sick of hearing it, but Slothwerks’ Meteorfall: Journeys is still one of my favorite games and one I return to every day. So you can imagine I was excited about a spiritual sequel that takes place in the same universe and features the same heroes. I was disappointed that Meteorfall: Krumit’s Tale came to PC first, but it’s finally in the beta stage on iOS and Android and I’ve been lucky enough to get a copy. It’s also had a lot of time in Early Access on PC, so I imagine it shouldn’t be too long before we see the full mobile release. It certainly seems just about ready!

One feature that made the original Meteorfall so accessible, especially on mobile, was that the entire game was made up of binary choices. If you can swipe left and right, you can play the game. But even with that limited input there’s a ton of strategy and depth for those looking to max out their experience. Which weapons and spells do you choose to take? Do you heal or upgrade a card? Do you skip a battle to heal a few points but lose out on both experience and gold? Even if you can beat the game, can you do so while hoarding the most coins and earning a high score? The new daily challenge mode also gave players a way to compete against each other without the possibility of one getting dealt a better hand. Still, many fans wanted something more robust, and that’s what Krumit’s Tale gives us, while still being very mobile-friendly. 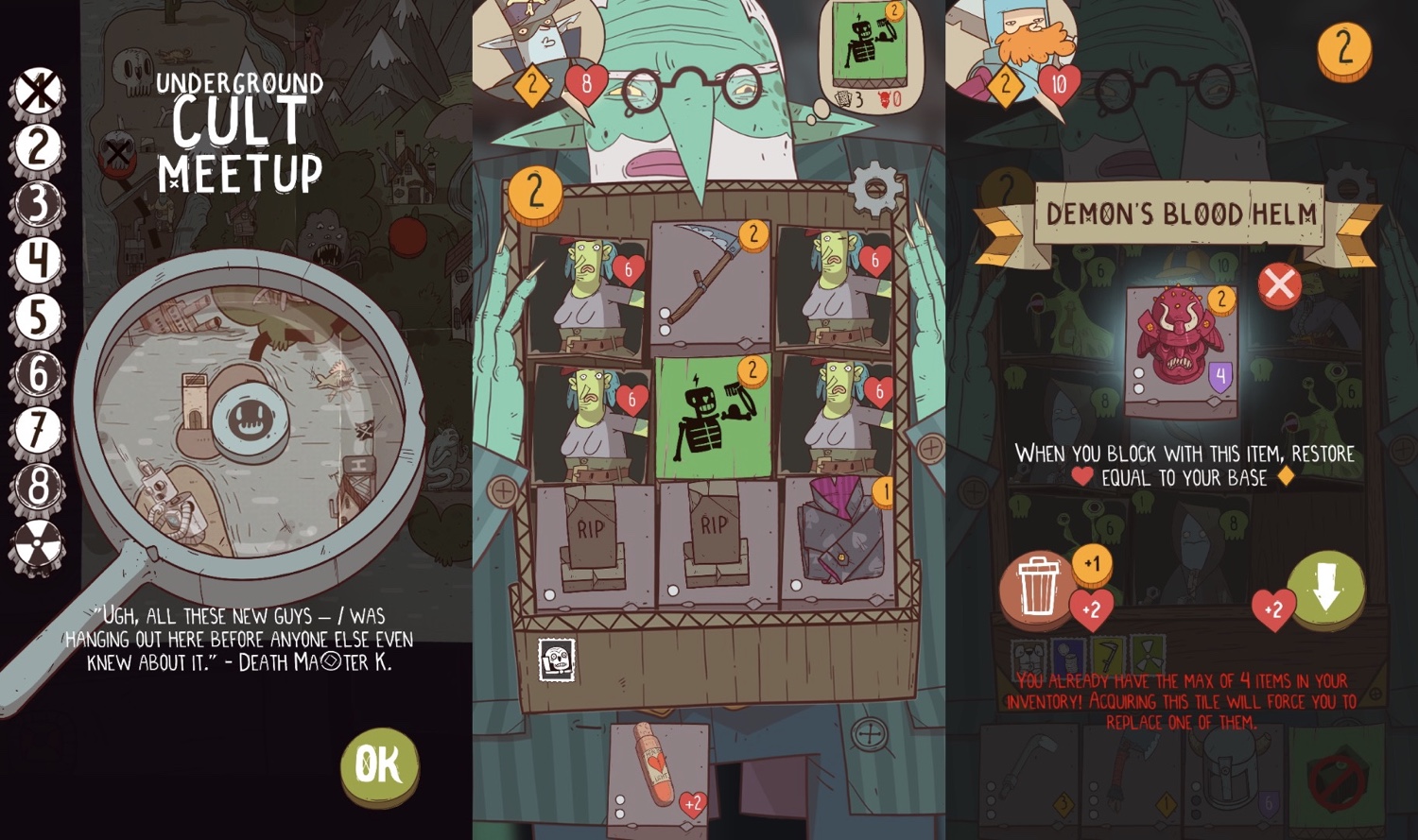 Krumit’s Tale is more of a full-fledged card-based dungeon crawler, in the vein of Slay the Spire. After finally playing Slay the Spire when it made its way to iOS, I can see some inspiration from there. But Krumit’s Tale does plenty to stand out on its own, starting with its layout. Each dungeon takes place on a 3×3 grid. It fills up with monsters and cards from your deck. You choose the order to deal with them. When an enemy is defeated or a card is removed, another will take its place until the deck runs out. To complete the dungeon, you need to clear out all the enemies. The item and equipment cards are what will help you do so, but you need to use them strategically. You earn coins for each enemy you kill, or you can destroy an item on the board to earn some coins. You then use those coins to buy equipment cards. You can hold up to four cards on the bottom of your screen at a time. When you’re ready to take on an enemy, you simply tap on them and enter the battle screen. As with Slay the Spire, you’ll see what their next move will be so you can prepare. If they’re going to attack for two damage, you may want to try to defend for two and stun them momentarily. Weapons and armor all have different stats and effects that can help you out, but if you waste them you could end up facing against a strong enemy with no items left to help you. And once you run out of health, the game’s over. This is a roguelike, so each run is self-contained and there’s no way back from death.

The game shares heroes with the original, so you start off again with Bruno the warrior. He heals whenever you destroy an item card, and most of his weapons need to be used face-to-face in battle. But after a short time spent with him, you should unlock Greybeard the magician, who attacks mostly from afar. It’s like an entirely different game, as you try to pick off monsters directly from the board using spells that freeze and burn. Ideally, you’ll never want to have to enter a direct battle with an enemy. So far, I find Mischief the rogue the most difficult character to play, though I can see a lot of promise once I learn how to use her stealth skill optimally. And I haven’t spent much time with Muldorf the Necrodude, but he seems much trickier than his Journeys counterpart. After killing an enemy, he can sacrifice his own health to summon a skeleton that will fight for him until it dies. I haven’t even unlocked Rose yet, and although there’s an option to unlock all cards and heroes from the start, it’s been going fast enough that I haven’t seen the need. Each character has such a different deck and ability that it’s like playing five different games rolled into one. And on top of that, there’s the daily challenge and mutations that change things up and limit the randomness.

I’m looking forward to spending more time with the game and learning a proper strategy for each character. Thankfully, the art and animations make it easy to look at the game for hours. The insanely talented Evgeny Viitman outdid himself here, as all the heroes and enemies are animated instead of just static drawings. It’s really nice seeing them all come to life. Krumit himself, who holds the box of cards, is also full of character, and I especially love his little ear twitches and voice-acted commentary. The world map is full of tiny details and the descriptions of each dungeon have the same humor we’ve come to expect from Slothwerks. There are also plenty of quality of life features already in the game, including iCloud sync that allows you to swap the same game between multiple devices, as well as save transfers between PC and mobile. There’s even landscape and portrait support, so you can play with it comfortably in your lap on iPad and easily play with one hand on your iPhone. There are still a few minor bugs to iron out, but otherwise there’s very little to complain about at this point, unless kicking my butt can be considered a negative — because the game has been doing that a lot. 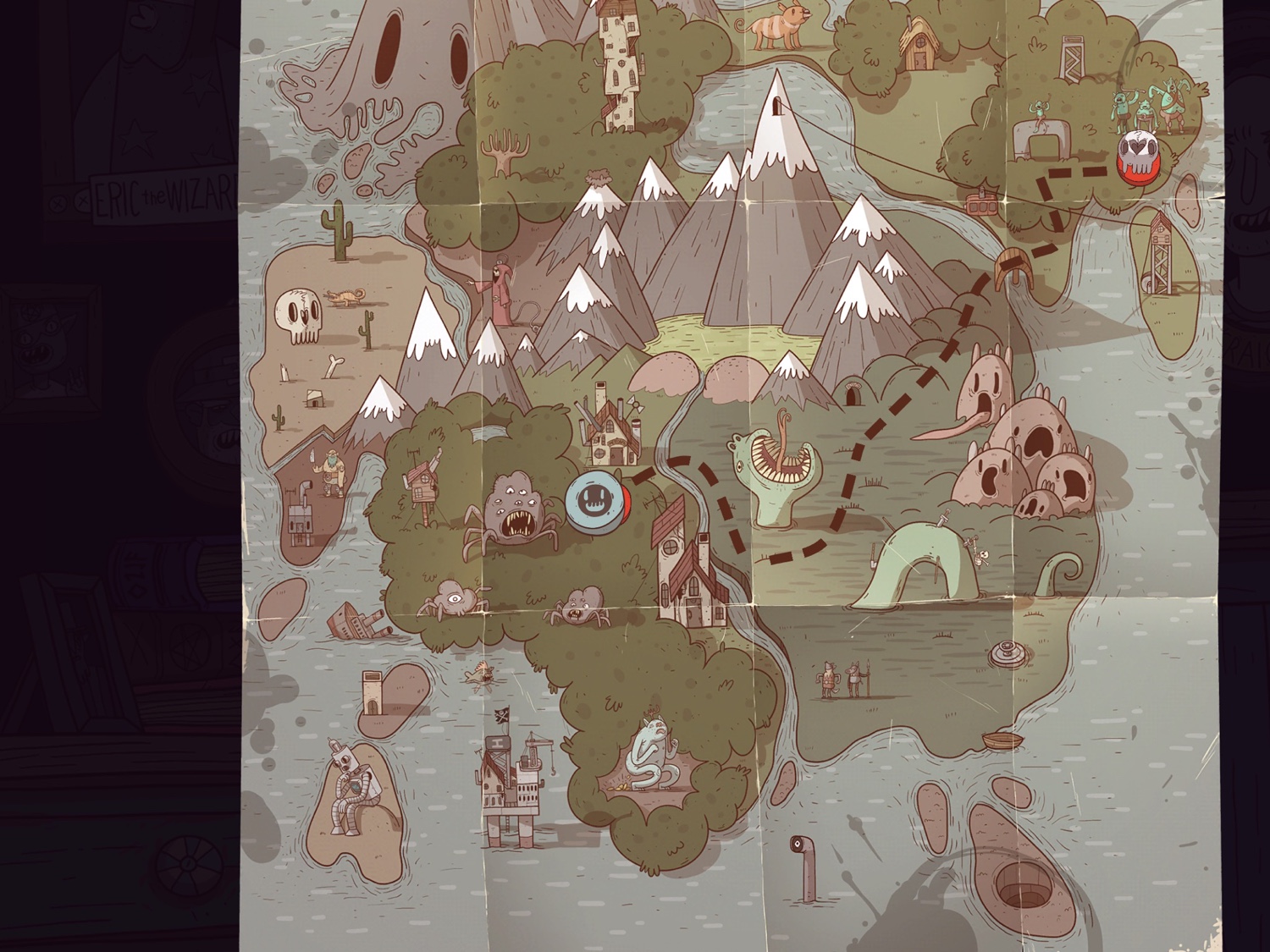 If you’re a fan of Meteorfall: Journeys but yearned for something a bit meatier, you’re going to want to keep an eye out for Krumit’s Tale. Yes, it borrows some ideas from games that came before it, but it does so much of its own thing that there should be room for it in your life alongside other card-based dungeon crawlers. I’ll be sure to let you know when the game is available in the App Store, but until then I’ll be making more gameplay videos and hopefully beating the game with at least one character! There’s no release date for the mobile version yet, but if you can’t wait you can always pick it up for PC now and transfer your save data over when it comes to mobile.