Over the last few years, Amanita Design has become one of my favorite developers, from whom I know I can expect a game with tons of personality. They first won me over with Samorost 3, but then I went back to catch up with Botanicula, an equally charming point-and-click adventure. I’ve since had the pleasure to play through Chuchel and Pilgrims, both of which are more playful than their previous games, and a bit of a detour from the point-and-click genre. Every single one of these games felt wholly unique and you can tell the developers poured their hearts into them. So when their next game, Creaks, was announced without any mention of iOS, my soul was a little crushed. But then it had a surprise appearance on Apple Arcade ahead of its release on other platforms, and suddenly all was well in the world. Once again, this is a departure gameplay-wise from their other creations, but still features the quirky artwork, wordless storytelling, and clever puzzles we’ve come to expect from Amanita.

The story begins with some quiet guy minding his own business, trying to get some reading done when things start distracting him. The light keeps flickering, no matter how many times he tightens the bulb. Then there’s a loud thud, the power goes out, and the wallpaper rolls down, revealing a small hidden doorway in his wall. Of course he has to go investigate, and what follows is a bizarre puzzle adventure through a very creaky mansion filled with all sorts of strange creatures. As I mentioned, there are no words in the game, but it does a great job using very animated cutscenes and environmental storytelling to slowly and clearly reveal what’s happening in this rickety old building. Even though the entire game is made up of a series of puzzles, they’re all rooms of this mansion, and you use ladders, stairs and rusty elevators to travel between them. It’s especially satisfying seeing the whole map zoomed out on the main menu with a trail that documents the path you’ve traveled so far. 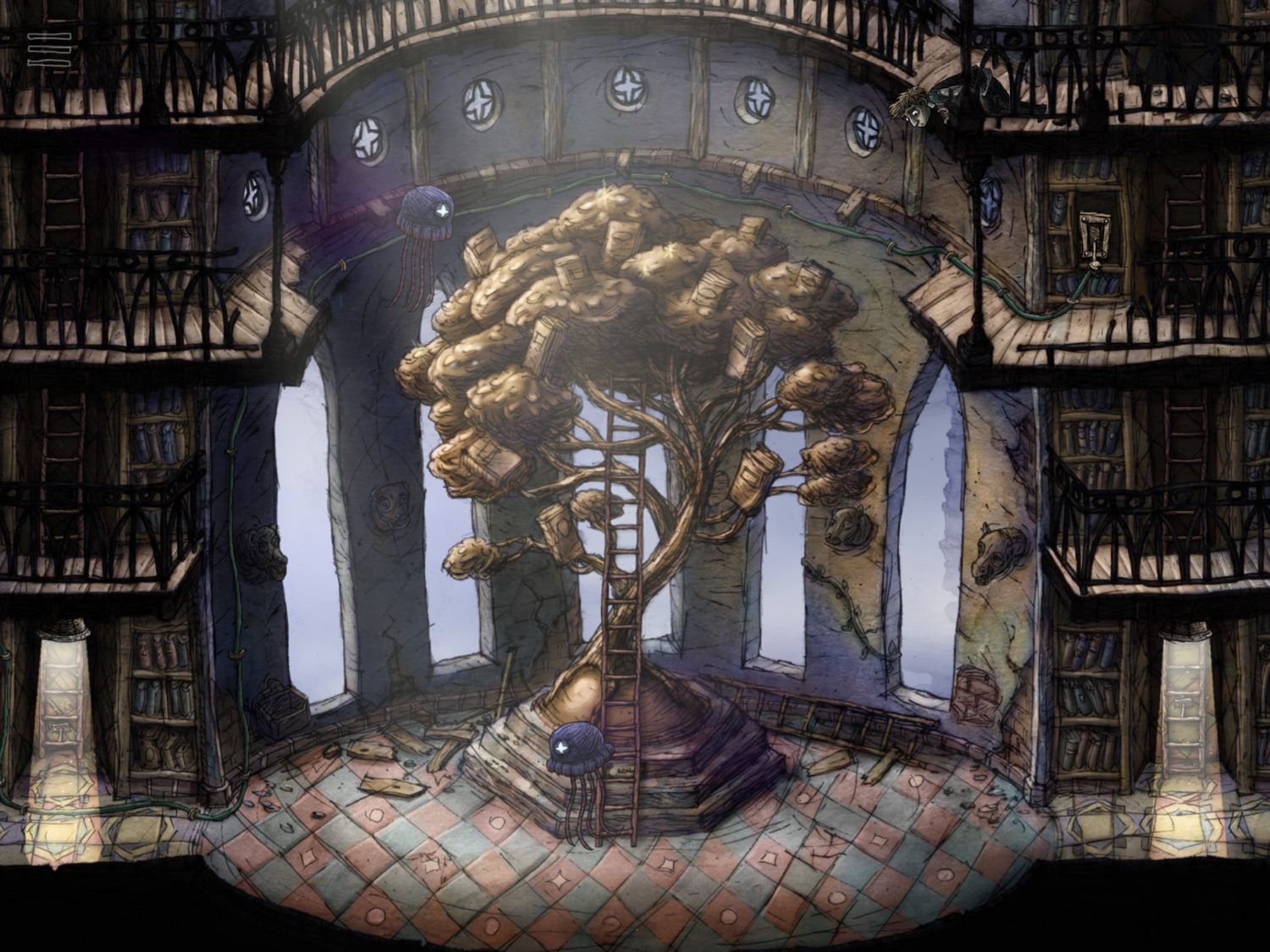 Creaks would probably be classified as a puzzle platformer, but that’s stretching the term a bit. The controls are similar to that of INSIDE, as you use the left side of the screen for directional movement, with a single action button on the right side that can be used to jump over gaps, pull and push objects, or interact with the many paintings you’ll find. You can’t jump at will, only when there’s a gap to cross, so any obstacles you encounter won’t require lightning fast reflexes or difficult jumps. 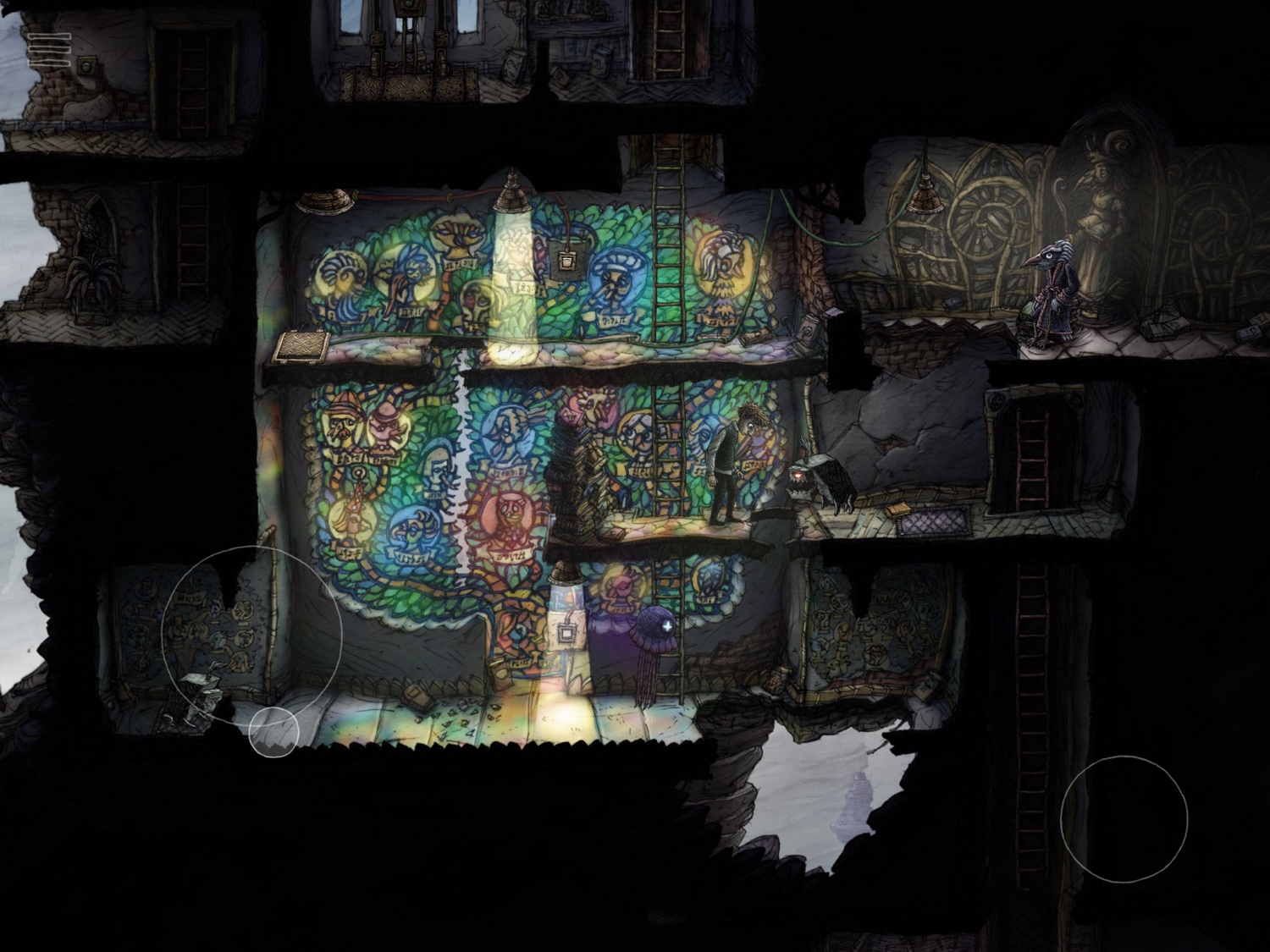 Later in the game you do get a second button, but it has one very specific use and it only appears in the levels that need it. While physical controllers are supported, I found the touchscreen controls to be perfectly adequate and completed the entire game on my iPad. I do wish the action button could be repositioned, as it’s a bit low on the screen for me. But since the joystick isn’t fixed, I was able to support the iPad with my left hand, minimizing any trouble from the action button’s placement. Overall, I didn’t really have any big issues with the controls. 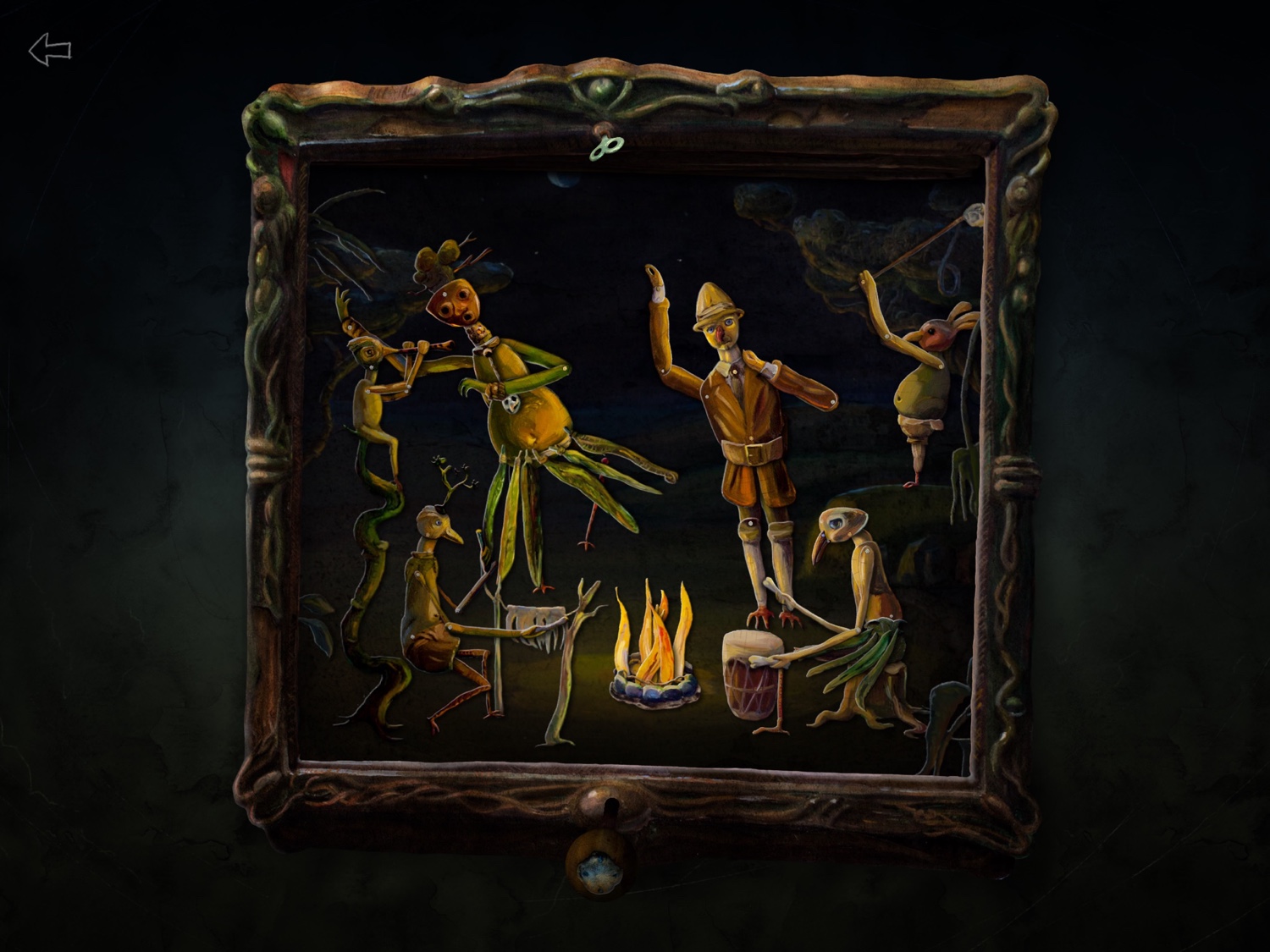 The main goal in each level is to get to the exit so you can continue on to the next room, making your way through the mansion. The problem is, there are all sorts of creatures roaming about, and they don’t like to be bothered. If you get too close to one, they’ll attack and kill you (and the death scenes are entertaining in their own right), though that only sets you back to your last checkpoint within that level. But you’ll learn early on that these creatures are afraid of light. So if you stand under a ceiling fixture or on the other side of its beam, they’ll leave you alone. But what’s really interesting is the reason they’re so scared of light. You see, if they somehow get trapped under a beam of light, it will turn them into a piece of furniture. For instance, the mechanical dog that’s eager to rip you to shreds suddenly becomes a harmless chest of drawers. Now you can push and pull and even climb on it, as long as you keep it in the light. 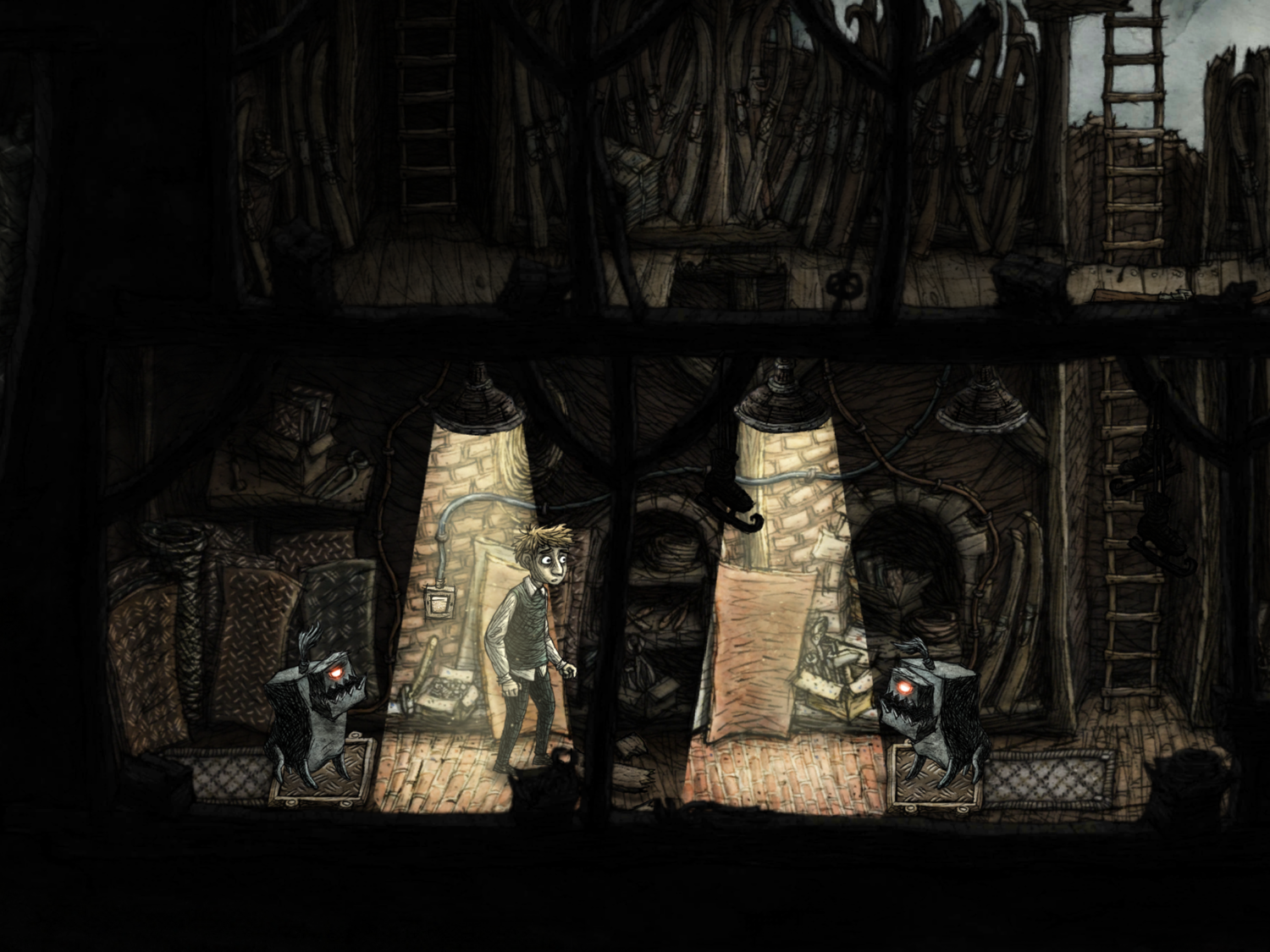 All these things are taught through play, not some overbearing tutorial. When a dog blocks your way, you need to experiment and observe his behavior to figure out how to dodge him. If there are switches and cranks in the room, you press and turn them to see what they do, then work out how they can help you get past the dogs or jellyfish or other creatures. Once you understand their behaviors, you can start to predict what would happen if you, say, block a jellyfish between two spotlights. Or you can learn how the different creatures interact with each other. But the game is always throwing new mechanics at you, so even when you think you’ve seen it all, there’s something ready to stump you just around the corner. In fact, just when I though I was at the end of the game, a brand new creature and mechanic were added, possibly my favorite in the entire game. Even though the goal remains the same from the first level to the last, the constantly evolving mechanics keep it fresh from start to finish. There’s no filler here, only quality puzzles.

For those who want a little extra, there are paintings to find throughout the mansion, some in secret rooms you have to uncover and others that feature special mini games to complete. I appreciated how the wall where all your paintings are collected has little sketches near each one that act as clues to indicate which room they might be in. Normally, it might feel tedious to seek out hidden rooms and achievements, but I actually enjoyed it here. Exploring the mansion is a pleasure, as there are tons of little details everywhere to discover. It’s almost like a Hieronymus Bosch painting, where I feel like I could look at the artwork forever and still notice new things. One of my favorites is a turtle shell on the wall that’s mostly static, but if you pay close attention you’ll see it tip its hat at you exactly once. There are idle animations everywhere, and even something so mundane as a piece of paper flying upward when a door crashes down breathes life into this world. Even the music plays a big part, as it fills out and gets louder as you make progress in a puzzle, letting you know you’re on the right track.

Look at all those lovely idle animations. #Creaks pic.twitter.com/s5DW90yeUs

I could go on and on about what I love about Creaks, but so much of the experience is discovering things for yourself and I don’t want to ruin that. This is easily one of my favorite puzzle games ever, and I know I’ll be thinking about it for a long time. There’s hardly anything to even complain about, aside the occasional bit of lag on my three-year-old iPad Pro and a minor bug here and there, mostly with the painting mini games. There’s also a couple of mini games that are unnecessarily punishing, both in their controls and insistence that you not mess up, but since they’re optional, they won’t stall your progress. I managed to complete them even through my frustration, and the game lets you come back to them any time you want if you don’t feel like playing them right away. So it’s hard to get too upset over it. 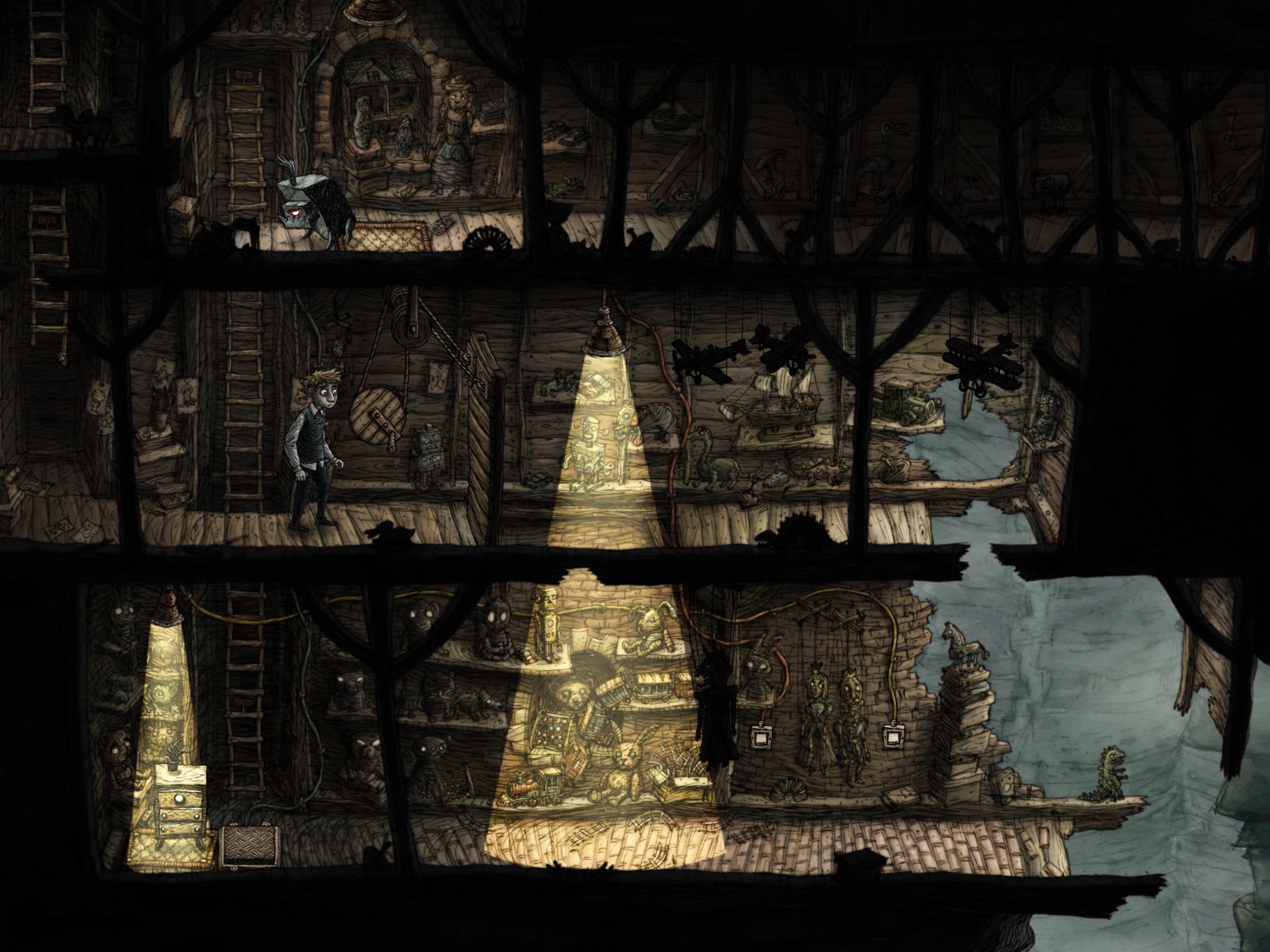 Every aspect of Creaks makes it one of the easiest games to recommend to puzzle fans. Some mechanics will be familiar, but when combined with others they feel entirely fresh. Together with the slowly unraveled story about why this place is falling apart, the utterly charming artwork and fitting soundtrack, I don’t know what else to call the game besides a masterpiece. I’m so glad I got to experience this absolute gem of a game on iOS at the same time (or even sooner) as other other platforms and didn’t have to wait years for it to be ported over. If Apple Arcade continues to bring us quality games like this, I will happily stay subscribed. If you haven’t done so yet, please download Creaks now and find out what’s causing all the ruckus.