Followers of this site might know by now that I always like to have a high score chaser on my phone to play during down time between other games. Often this ends up being a match-three game, whether it’s Six Match or High Rise or Swap Sword or a number of others that have no IAPs or ads. There’s something meditative about them, so I’m always looking for new ones that do something unique and can suck me in until the next one comes along. The latest is Kavel, which likes to keep some of its rules a mystery and let you figure them out for yourself. This means it can be a bit underwhelming at first, but once you understand it fully, it becomes incredibly deep and hard to put down.

In Kavel, you’re presented a board that’s filled with gems made up of five different shapes and colors. To score points, you place down Tetrominoes — those shapes from Tetris — and try to match four of the same color to score points and create a bomb. Including a bomb with your match will clear out all the gems of that same color that are touching. If there are two bombs in the match, it will clear out all gems of that color from the board. Three bombs clears out all gems of that color and arranges the rest in a nice orderly fashion, separating the colors into neat sections. But the only way to reach a substantial score is by matching four bombs, which will create special bombs that increase your score multiplier. They can also sometimes spawn a gem that will give you an extra move. When making a match, you also want to pay attention to the percentage in the corner that tells you how many new bombs you’ll create and the likelihood of them being a specific shape. The more gems you clear, the more bombs you’ll get. 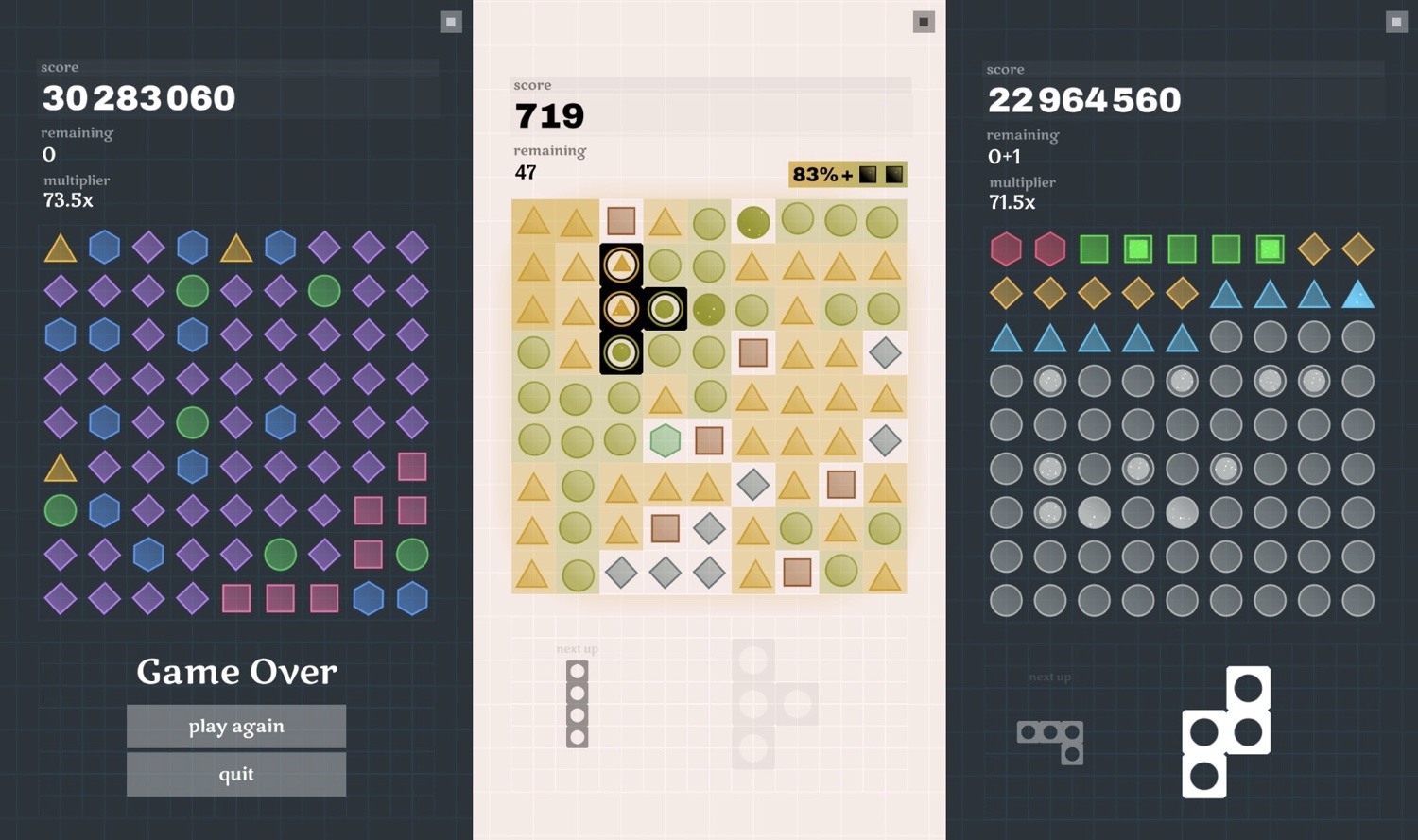 At first, that seems to be all there is to it, and you might wonder how people are getting such high scores. But what the game is less forthcoming about is that you can also make matches that include four different colors. That in itself isn’t a game-changer, but there’s more to it. You can match four bombs, no matter what the colors. Since that clears all the tiles of the colors you matched, you end up clearing a lot more at a time and therefore creating more bombs and multipliers. Of course, it’s easier said than done, and requires strategy — and a bit of luck — to set up enough of those four-bomb matches to see your score skyrocket. But ones I learned that rule, the game started eating up all my free time. My current high score is 30 million, but I see people with 50 million and more, so I’m determined to get up there.

There are three ways to play Kavel — Casual, Frenzy, and Zen. Casual is my favorite mode, in which you have fifty turns (aside from earned bonus turns) before the game ends and your score is tallied. Frenzy is a time attack mode, where you’re on a timer. You can earn more time, but honestly I find this version of the game a bit too stressful and haven’t really played it much. The third one, Zen, doesn’t have a score, and it’s for those who just want to make pretty explosions without any pressure.

That’s all there really is to it, but I just can’t stop playing. It also helps that the sound effects and animations are satisfying, and I appreciate all the different color themes — both light and dark — to make the game feel more your own. There’s even a colorblind mode for those who have trouble differentiating the default colors from each other. 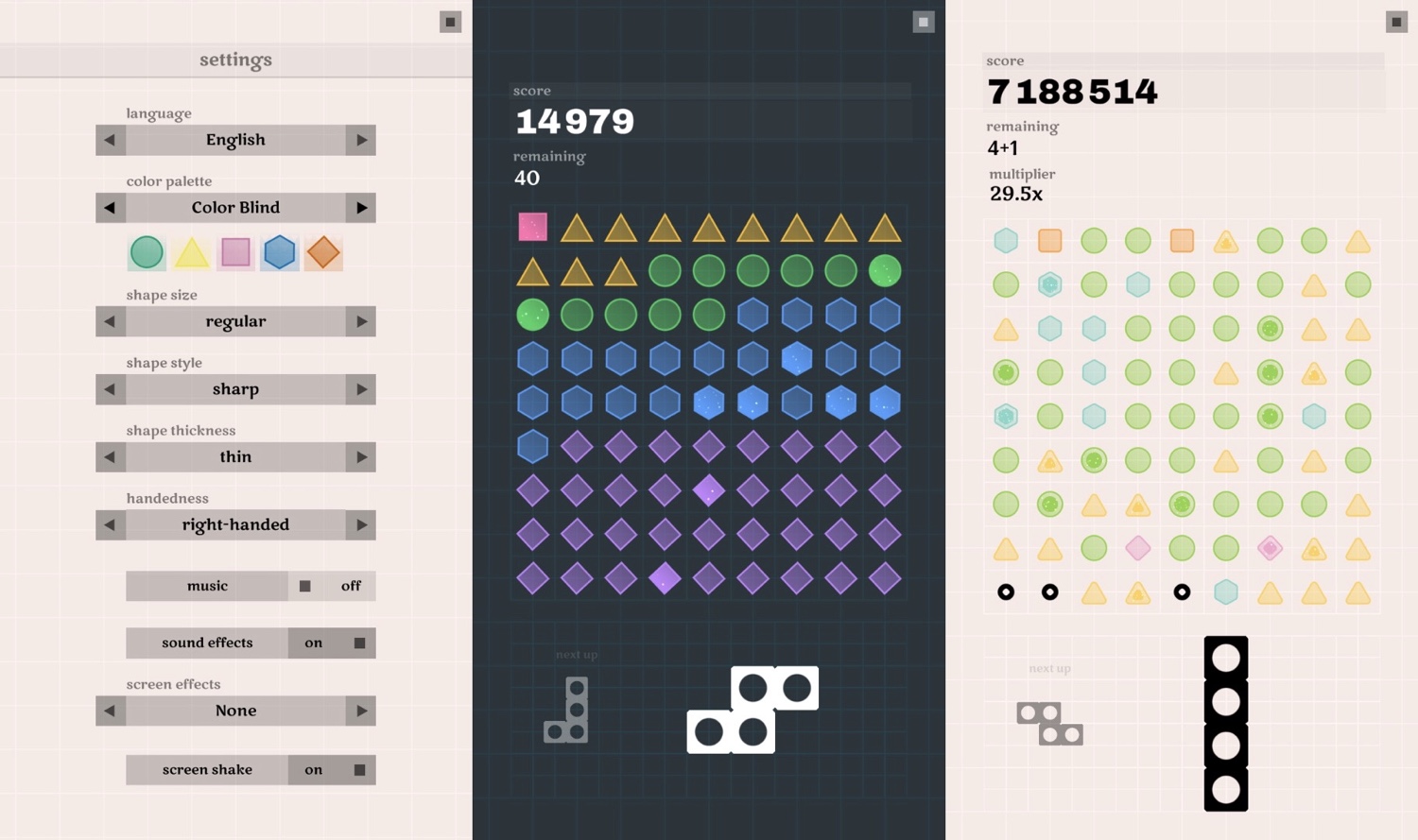 Kavel is a deceptively simple game that requires more planning ahead than most games of its ilk. If you waste too many turns trying to set up the perfect match, you won’t have much room left to score big. So it keeps begging for “one more game” to improve your strategy. I only have one complaint, which is that you can’t save mid-game. The developer expressed interest in adding that, though, so hopefully it will get updated. Other than that, it’s a polished game that’s easy to play anywhere. If you’re a fan of high score puzzlers, don’t even think twice — just grab Kavel here and start matching Tetrominoes.