A Monster’s Expedition (Through Puzzling Exhibitions)
By: Draknek Limited

I didn’t realize there was an open world puzzler-shaped hole in my life until I played Hello Games’ The Last Campfire. The sense of discovery with each puzzle solved and each new area uncovered was just the kind of experience that I’d been craving without even knowing it. Lucky for me, not long after I finished it, Draknek’s bigger and more impressive open world puzzler, A Monster’s Expedition, released on Apple Arcade. After living inside it for the better part of a week, I’m happy to report that it’s one of the best puzzle games I’ve played, and I’m glad that there’s still plenty of content available to me in the form of bonus puzzles. This is a huge game that lets the player decide when they’ve had enough and that makes it easy to recommend to just about anyone.

At its core, A Monster’s Expedition is about pushing trees. You control the little monster from Draknek’s other games, A Good Snowman is Hard to Build and Cosmic Express, as he explores a sprawling museum that spans hundreds of islands. The basic idea is to push trees in a way that they make connections to other islands, allowing him to reach more and more of them. At first, this is as simple as pushing one log over to fill in a small gap between islands. But as you progress, both the connections and the methods of creating them evolve in brilliant ways. Very early on you might even wonder, “is this it?,” but hold on until the title screen to have your mind blown.

The entire control scheme involves directional movement. That means, if you play with a controller, you’ll mostly be using the joystick or directional pad to walk into trees and push them. However, I found the touch controls to be far superior, especially late-game, despite the occasional issue with them. That’s because, as with A Good Snowman, you can swipe on a tree or log in the direction you want to move it and the monster will carry out your orders on his own. This saves time, especially when a lot of running around is involved. Not only that, but you can see a preview of where the log will end up if you follow through with that command. That said, sometimes the game would give me false previews that wouldn’t actually work. Other times, I’d swipe on a tree only get him to walk near it instead of pushing. None of these are huge issues, though, as the game includes an unlimited undo button, as well as an option to reset an island entirely. And if you mess around too much with things and it’s too late to undo them, there’s a robust backup system that allows you to revert to an older checkpoint. So while the touch controls could use some fine-tuning, I think they’re much more user-friendly and preferable over a controller. 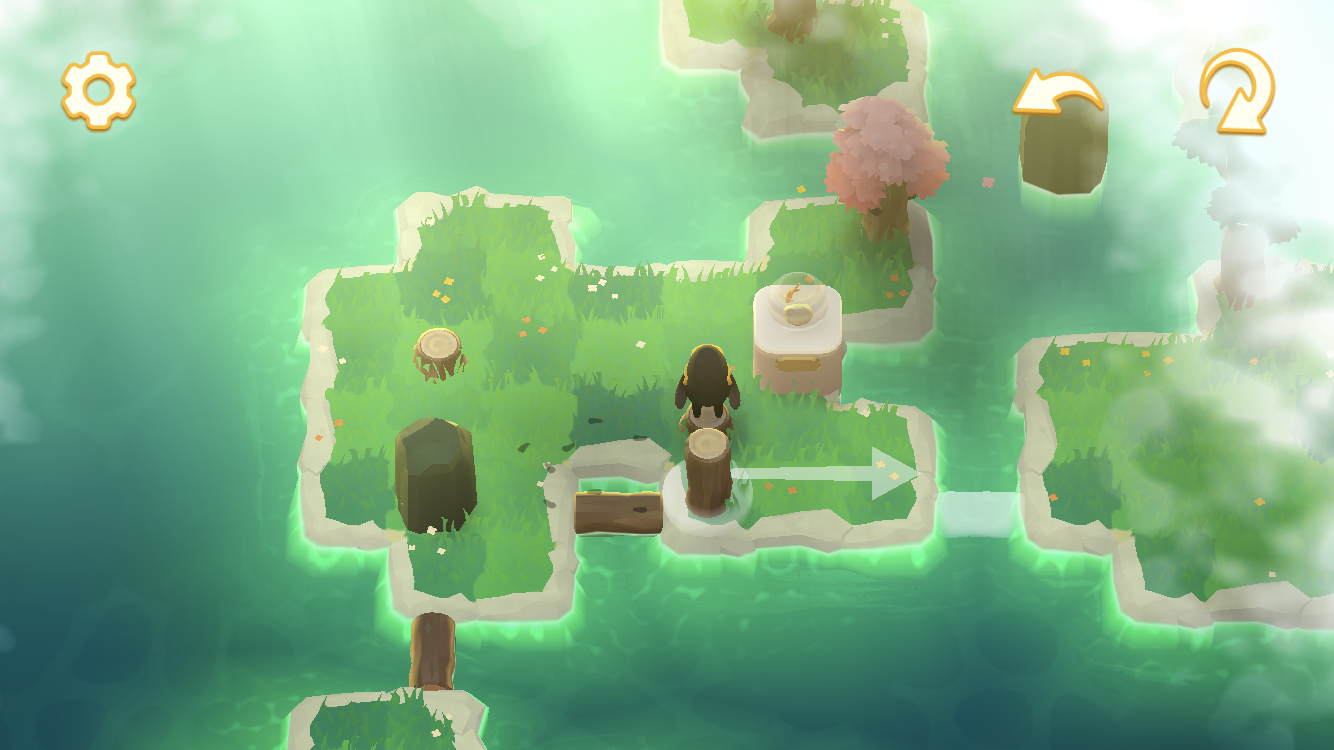 Now, you might be thinking, “what’s so hard about pushing logs around?” The challenge here comes from the rules that bind these trees. For instance, after you knock down a tree, you can’t keep pushing it in that same direction. The stump is in the way and doesn’t give you enough momentum. But if you push the log sideways and let it roll against a rock, you might be able to stand it up again and get it moving in the direction you need it. I don’t want to give too much away, as learning all these rules through play and putting them to use is part of the magic of the game. See, the rules never actually change — you just might not realize they exist until the opportunity arises. Or better yet, you’re forced into learning and using them. Aside from the basic controls, the game never explicitly tells you anything. Everything is taught through necessity, and that’s so much more satisfying than being told what to do. It also means that you can later go back and revisit islands to look at them in different ways with your newfound knowledge. 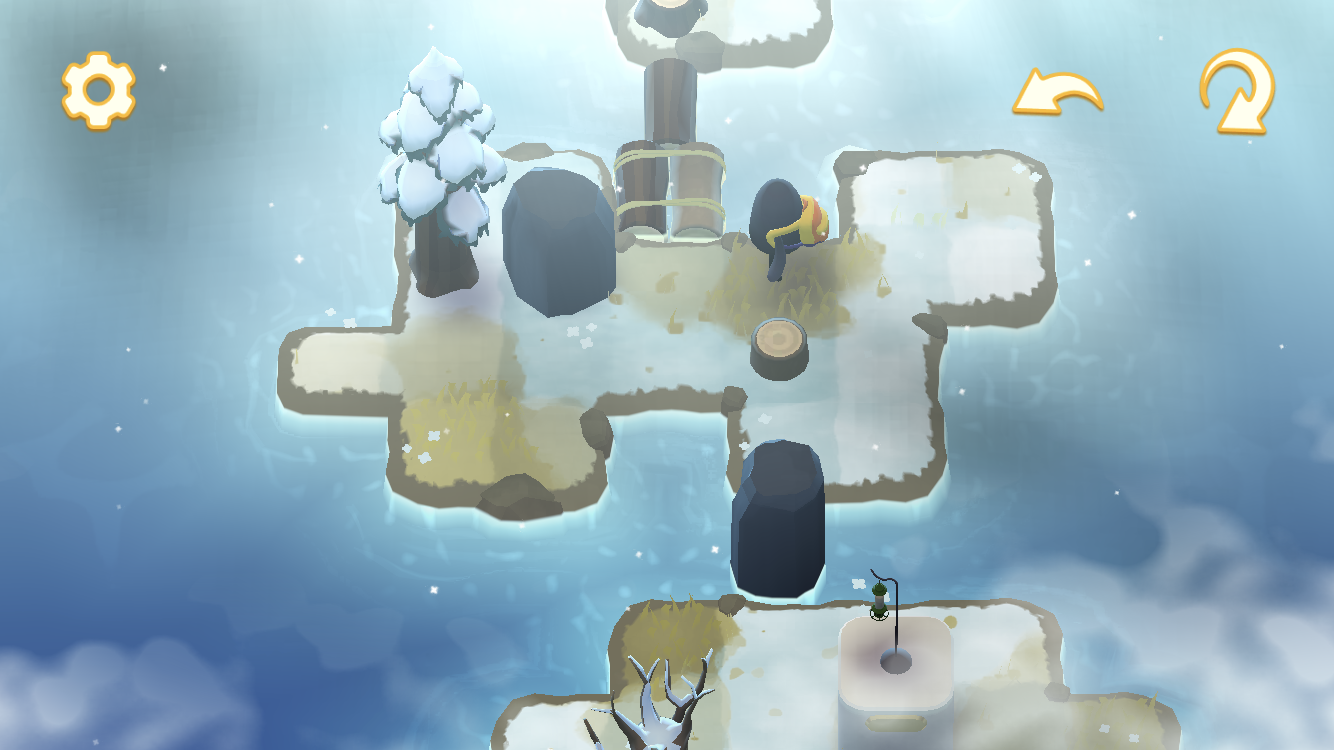 If you get stumped (pun intended) on a puzzle, there are usually others you can work on in the meantime and then come back to it later. There’s often multiple paths and choices to make as to which direction to take. But you’re never stuck with the choice you made, as there are mailboxes throughout that act as portals. You can jump between them as much as you want and go out of order if you so desire, or stay on a strict path until you see the credits roll. This world is so big and there’s so much freedom, that you and a friend might end up taking vastly different routes to get to the end. Then it’s up to you whether to move on to another game or work on the truly difficult bonus and meta puzzles. So there’s plenty here for both novices and experts alike. I’m usually against filler in my puzzle games, but the sense of discovery here made even the easiest puzzles exciting.

On your travels, you’ll come across exhibits from “Human Englandland,” displaying items from (what appears to be) a now-extinct humanity. The descriptions for each are written for monsters by monsters, so they’re not always entirely accurate. My absolute favorite is “A Cat’s Bed,” but there are plenty of them that gave me a chuckle. They serve as a nice diversion from the puzzles and something to look forward to as you discover each new area. They add some story and context to the world, but if you’d rather just focus on the puzzles, you can ignore them. You’d be missing out, but it’s still up to you. 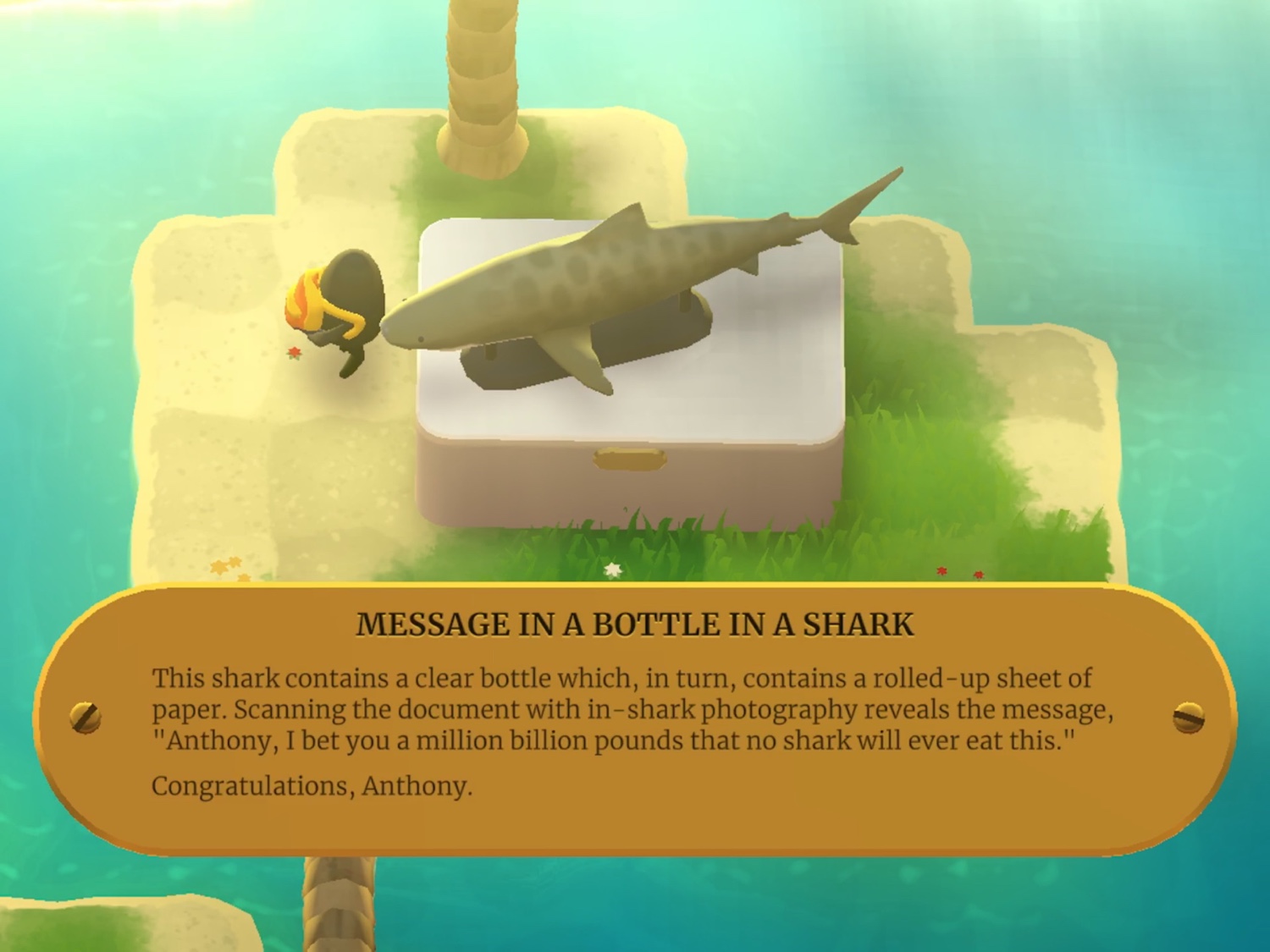 The visuals also help sell the game, as it’s easy to look at these charming graphics for hours at a time. There are also nice little touches like being able to sit on the edge of an island and dangle your feet in the water. I also love how the colors of the grass form a subtle grid that’s helpful for the puzzles without being distracting. Then there’s the gently rolling water and the monster’s own animations, including a little wave at the player. The whole presentation is just perfect.

One complaint I do have — aside from the occasional control issues — is with the overhead map. Every time you jump into a mailbox, it lets you see a zoomed-out version of the world, which you can pan around to see how far you’ve gotten and also try to scope out puzzles you haven’t solved yet. First off, I wish I could see it at any time, not just at mailboxes. But that would just be a nice addition. What’s more of an issue is that on my iPad Pro 10.5″, I currently can’t see logs or trees on my overhead map. Only the shapes and colors of the islands I’ve seen and any exhibits on them are visible. But if I play on my iPhone SE 2020, I can see every tree and log. An update is planned to bring the detailed map to more devices that can handle it, which is appreciated. But for those that never get it, it can be a bit tedious to find puzzles you left incomplete, and the meta puzzles are especially difficult to work on without it. That said, you can still enjoy most of the game without relying too much on the overhead map. It’s mainly completionists that will run into trouble. So don’t let it turn you off from playing the game. 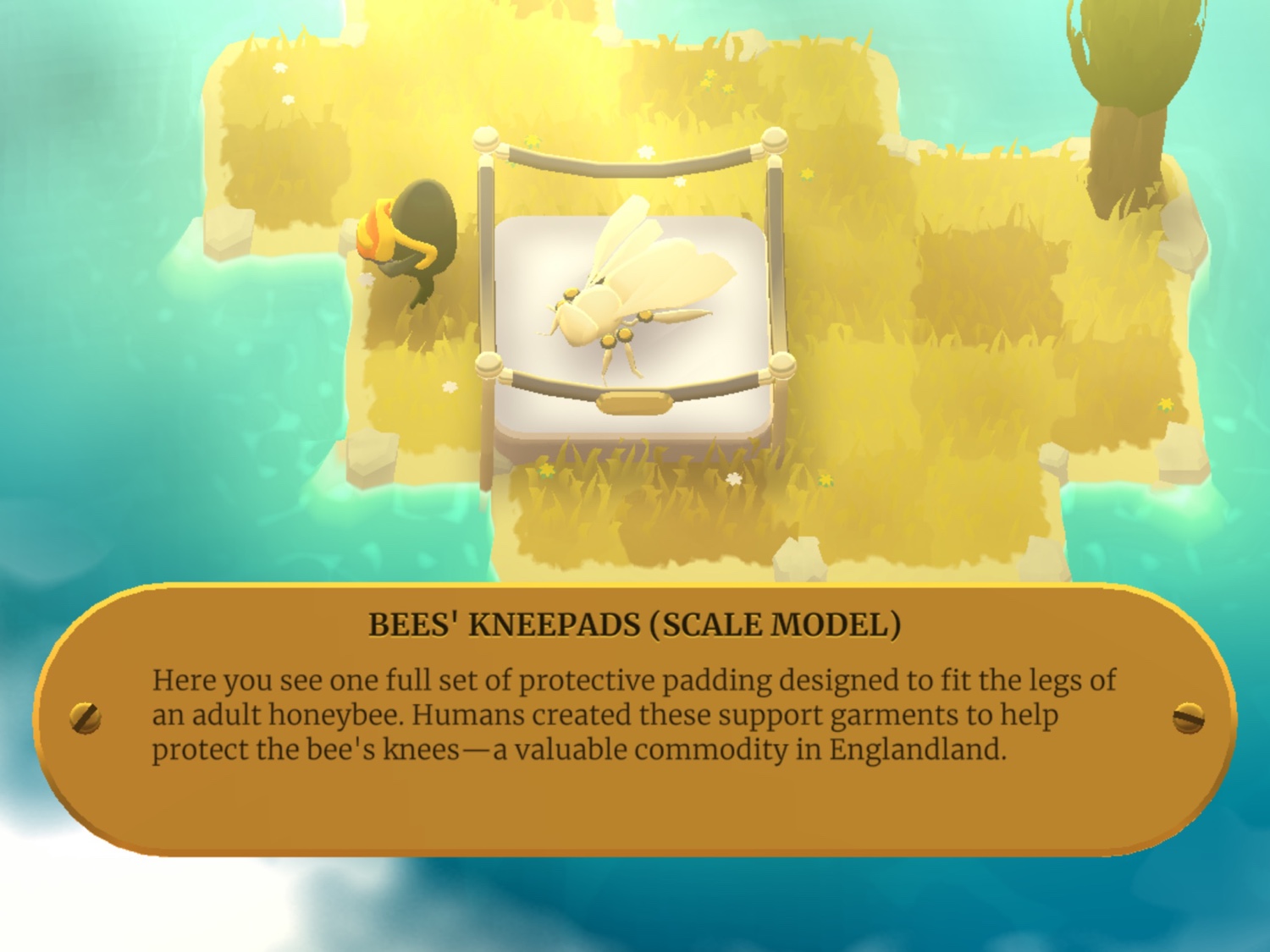 A Monster’s Expedition is easily one of the best games on Apple Arcade at the moment and one of the best open world puzzlers out there. The excitement of drifting off to a new area or solving a seemingly impossible puzzle is hard to match. It’s so easy to get sucked into the game and lose hours in one sitting, but you can also play in short sessions whenever you can grab them. Either way you roll, you’ll likely find yourself dreaming about logs. If you’re a puzzle fan, this is a must-have, and if you’re not, give it a chance anyway because you might be surprised. So grab A Monster’s Expedition here and start your tree-pushing adventure.