I donΓò¼├┤Γö£├ºΓö£├╗t know how many of you will remember, but my first ever review on this site was for a room escape game called Atmosfear. It was a short demo that never got expanded on, sadly, but I loved the whole idea. IΓò¼├┤Γö£├ºΓö£├╗m not a big fan of the augmented reality (AR) technology that Apple introduced fairly recently and that many developers have been trying to take advantage of. Rarely do I want to see my messy living room inside a game IΓò¼├┤Γö£├ºΓö£├╗m playing, or want to walk around my apartment. But the way Atmosfear did things, you could just sit in a swivel chair for the entire game in order to explore your surroundings. ItΓò¼├┤Γö£├ºΓö£├╗s been almost a decade since I played Atmosfear, but thereΓò¼├┤Γö£├ºΓö£├╗s finally another game utilizing similar mechanics. In HoloVista, you use the motion controls on your device to look around different rooms and take photos of certain objects. It’s a clever use of such technology, but thankfully the game isn’t all about this one gimmick. There’s a wholesome and relatable story surrounding it that makes HoloVista well worth experiencing.

It might not be entirely obvious from the promo materials, but HoloVista is the latest in games that take place entirely inside a fake phone. You play as Carmen, an aspiring architect who gets her dream job with a famous upscale architecture firm called Mesmer & Braid. Already from the start, though, things are a little strange. Instead of having you design buildings, they ask you to visit a mansion that’s part of their Autohaus project and take photos of the different rooms. You’re also meant to share those photos with friends on social media and then report back how the rooms feel to you, whether they evoke any strong emotions. Yes, it all seems very odd, but surely you can’t pass up the opportunity of a lifetime because it’s not exactly what you expected, right? 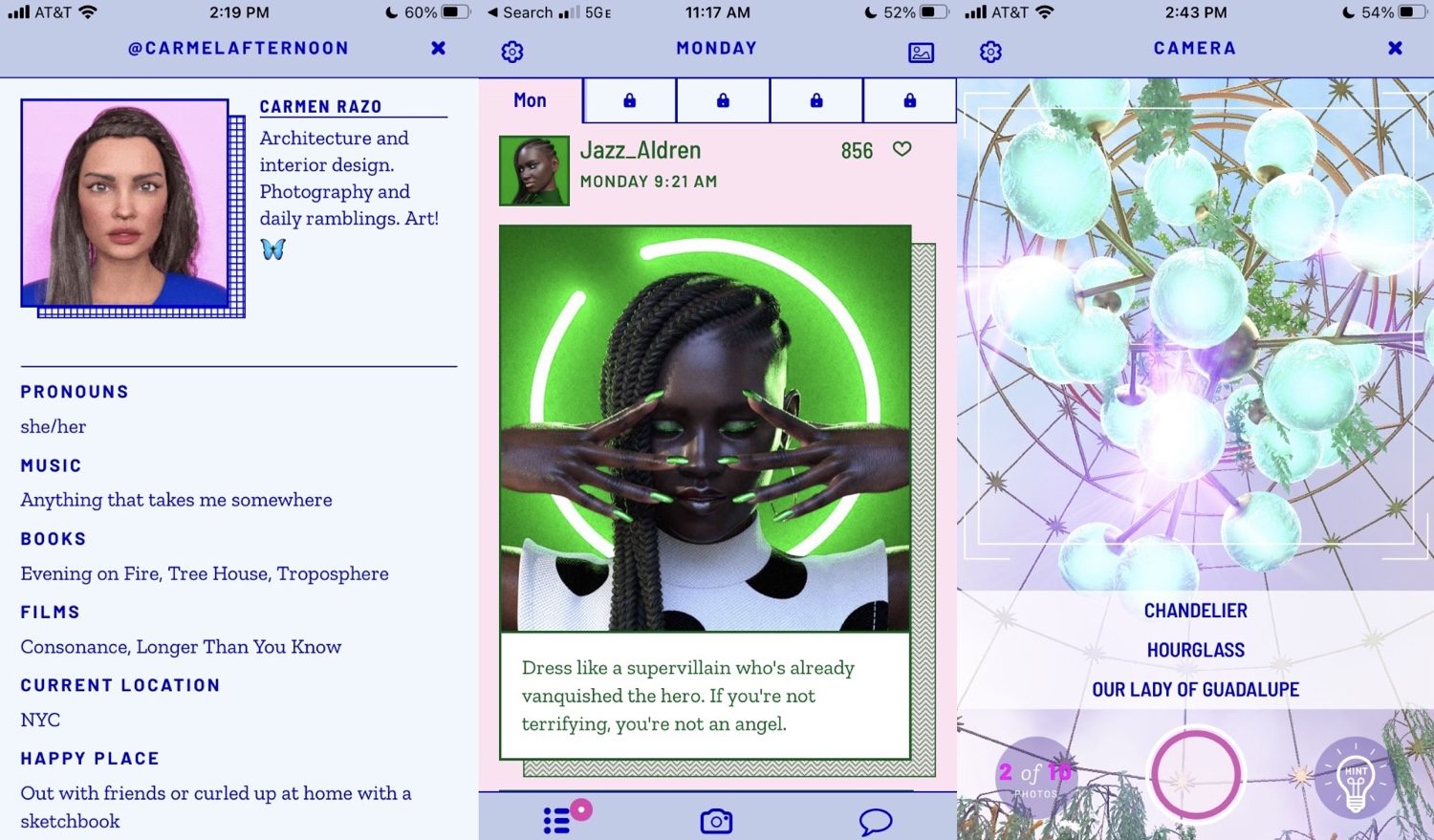 So, despite some misgivings and concerns from your friends, you continue photographing this mansion. Each day, you explore a few more rooms. When you visit a room, you get a 360╬ô├╢┬╝╬ô├╗├ª view of it. You can either hold your phone up and move it around you to look at your surroundings, or stay seated and swipe at the screen to change your view. While the motion controls are certainly more novel and engrossing, I preferred shutting them off and swiping for most of the game.

Each photorealistic and surreal scene is like a hidden object game (HOG), where you’re given names of items you need to photograph. Some are easy to spot, while others are somewhat concealed. I’m not usually a fan of HOGs, but I rather enjoyed looking around each room and searching for the items. It doesn’t hurt that the rooms are packed with a ton of interesting details that are fun to find, even when you’re not asked to. I also like how you often have to look above or below you, not just around you. There are some sneaky hiding places for objects. The full space of each room is taken advantage of, making for a fun — if somewhat easy — puzzle. 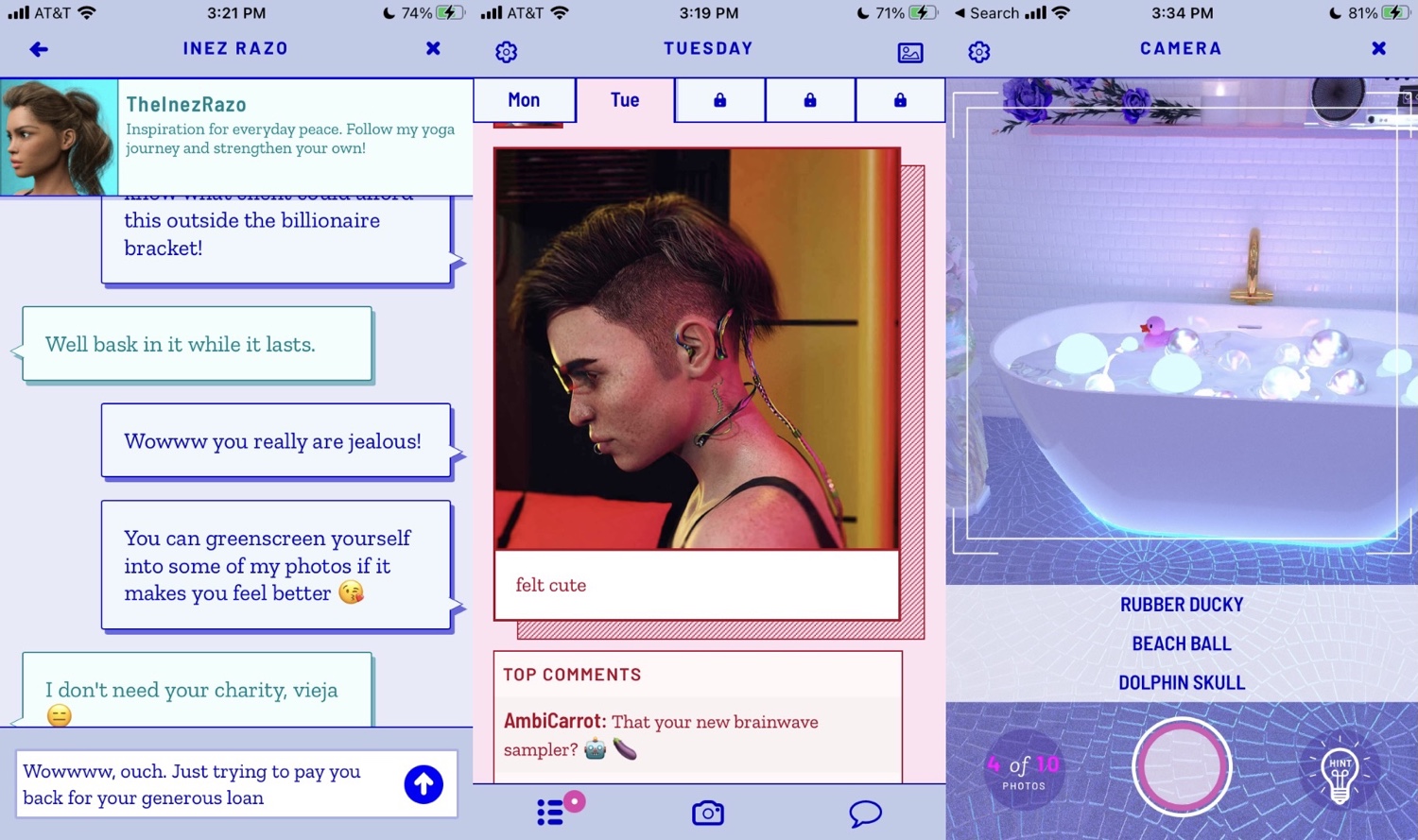 Once you’ve taken all your photos, you need to pick which one matches the caption given so you can post it to social media. Again, it’s usually not too difficult to figure out, but later in the game, they get a bit trickier. There’s no penalty for getting it wrong, though, so this is a very stress-free game, as far as the puzzles go. Mostly, it’s meant as a storytelling device that’s more interesting than simply having the photos posted automatically. You also get to choose from a select number of filters, which is, again, mostly for immersion. But all these little activities work well together and offer a more varied experience so that you’re looking forward to the next room instead of dreading it. There are also other posts by friends, and each account commenting on has a profile you can read through. It’s these little details that sell the experience and also make it worth taking your time with the game instead of rushing through to the end. 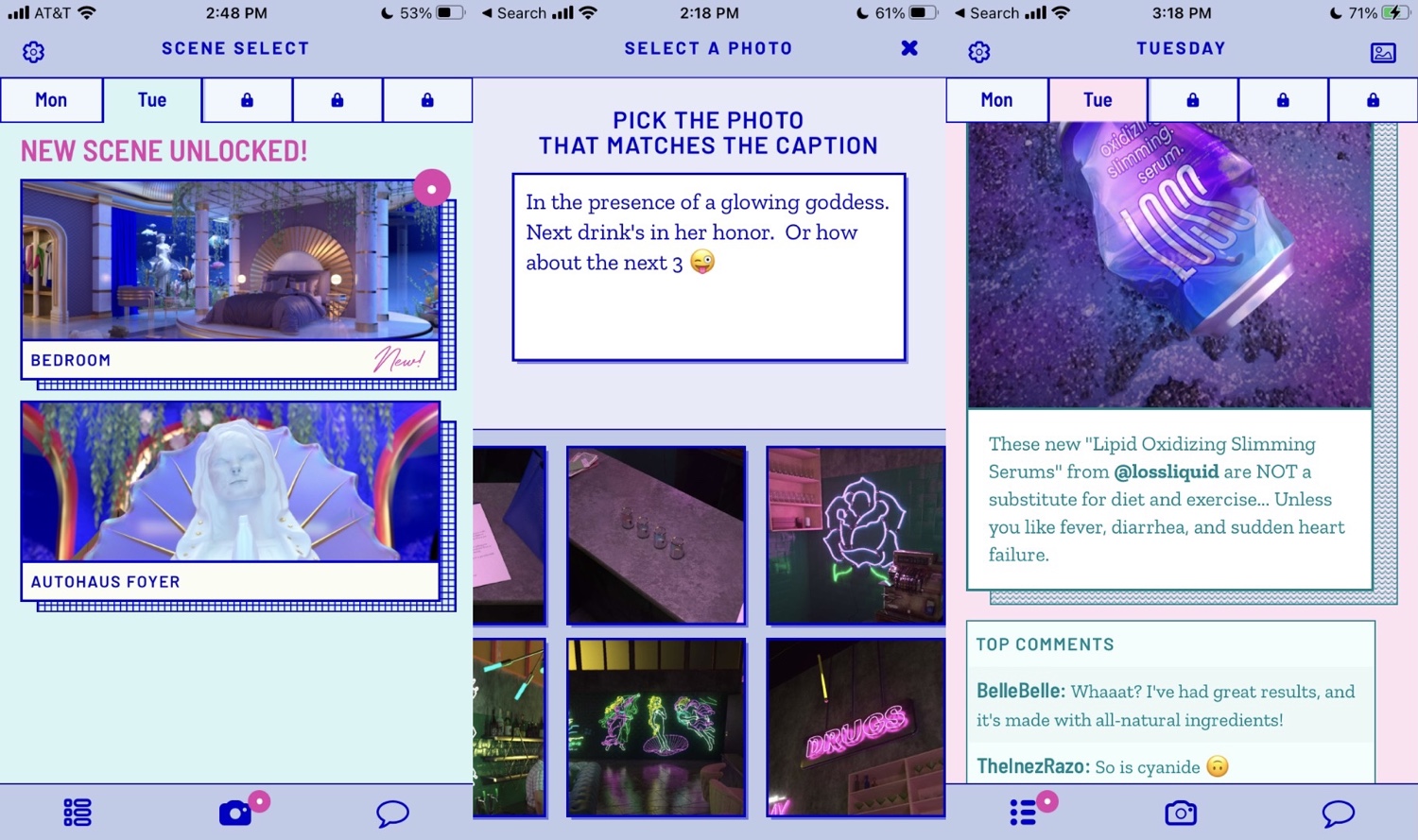 The most challenging puzzles in the game are completely optional, but they hide little story bits, so it’s worth working them out both for the satisfaction of doing so and for the reward. They involve finding a password based on a hint, and early on they’re pretty obvious. But some tripped me up until I went back into the scene to search for the answer. I really liked these trickier riddles, but I think the game could have done a better job letting you know that you’re meant to revisit the room to find those answers. I wasted some time thinking that the answers would all be in the photos I took, but once I started revisiting places, I enjoyed solving those puzzles a lot more. 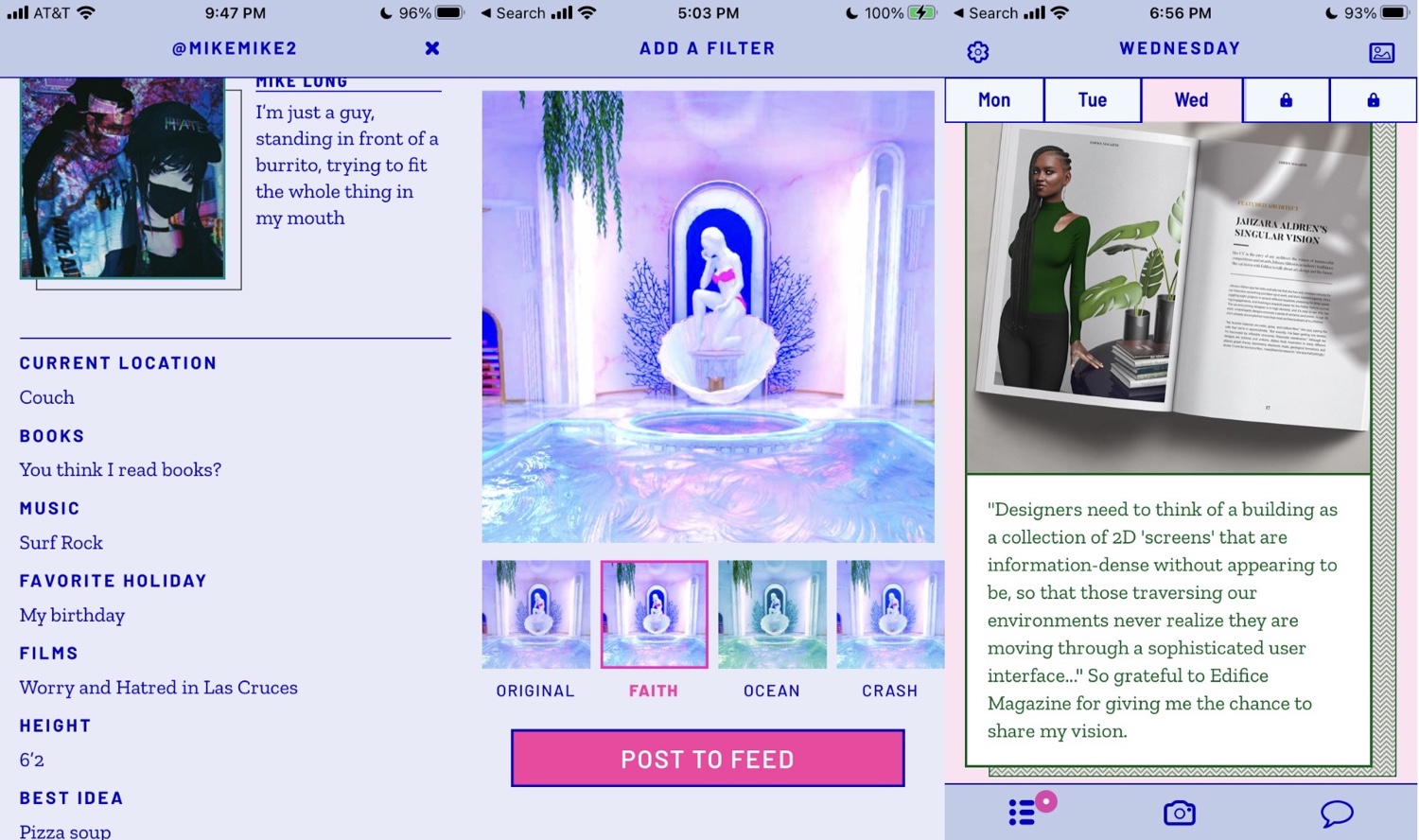 Now, all the trippy environments and puzzles wouldn’t be worth squat without a solid story and writing to pull them together. Thankfully, HoloVista has that. I don’t want to reveal too much, but Carmen is a likable but flawed character, and you learn a lot about her through both her social media posts and private text conversations with friends. Her friends are also well-written, and I got a few chuckles out of some of their posts and comments, as well as some late-game humor from random accounts that I don’t want to give away. I also get the sense that there’s some symbolism and hidden meanings in certain objects and comments that would be more noticeable on subsequent playthroughs. The game also offers some replay value in the form of finding all the available objects in each scene, but it could use a bit of work. For instance, if you take a photo that frames more than two items you need in the room, the latest photo replaces the others of those items. At one point I had three of the same photo in my album because of that. Also, sometimes I would have one item missing and it seemed to fill it in without me actually finding anything new. These might have been a bit distracting, but overall they didn’t detract much from the game. 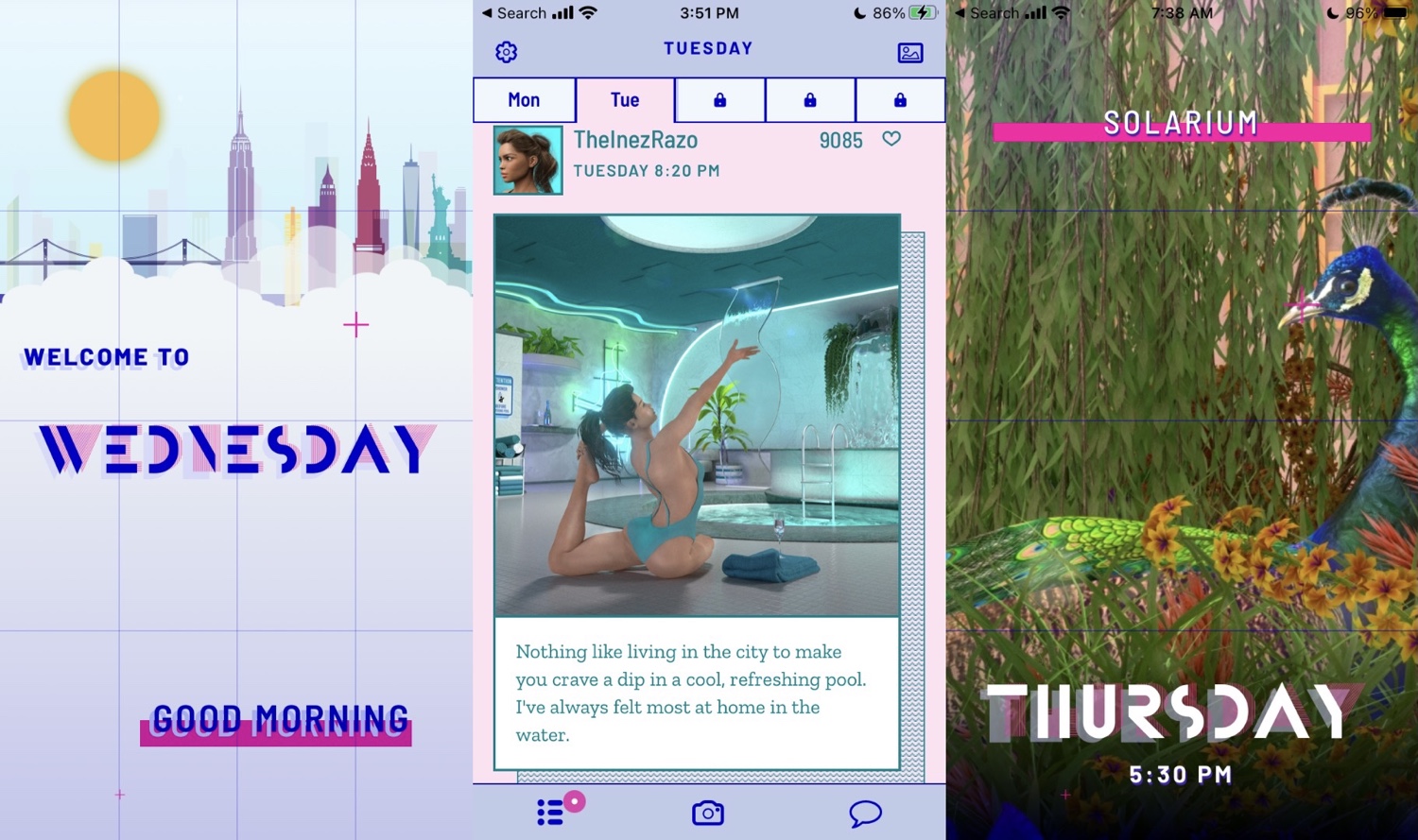 It’s no secret that I’m a big fan of “fake phone” games and faux social media, but HoloVista stands apart from the others with its unique blend of hidden object scenes that are actually fun, puzzles that fit with the layout, an engrossing story and relatable characters. I also appreciate that it allows you to play how you want, and even lets you speed up the texting if you don’t want to wait for the characters to “type” them out. This is a wholesome game that tells a meaningful story without getting preachy or overly sappy. I highly recommend it to anyone looking for a new narrative-based game that’s tailor made for mobile devices. So go grab HoloVista here and enjoy your stay at the Autohaus.

And if you need any help with the puzzles, try my walkthrough guide.

Agent A: A Puzzle in Disguise: Walkthrough Guide