One genre I’ve been gravitating to more and more lately is the relaxing adventure game where you explore, talk to people, solve a few problems, maybe unravel a mystery, all without taxing your brain or reflexes too much. Developers also seem to be recognizing a desire for them, as we’ve been seeing a lot more of them, from OXENFREE to South of the Circle, and even the recently ported The First Tree. Embracelet is the latest one to make its way over to iOS and, as a fan of the developer’s first game, Maid of the Milky Way, I was thrilled to be able to play it so soon after it released on other platforms. Overall, this is a great port, and I would highly recommend it, with a few caveats.

In Embracelet, you play as Jesper, a Norwegian teenager who is given a magical bracelet by his ailing grandfather. He shows him how to use it to control objects that would otherwise be too heavy to lift, giving him a sort of superpower. He also makes him promise never to use it on anyone and not let anyone see him use it. Not much is known about the origins of this bracelet, but his grandfather thinks it was pulling him somewhere and wants Jesper to find that place and return it to where it belongs. That means visiting the small fishing island of Slepp, where his grandfather grew up. And, of course, a magical bracelet can only lead to adventure.

The island of Slepp has seen better days, and parts of it have fallen into disarray. There also aren’t a lot of people around, so this gives Jesper many opportunities to use the bracelet without worrying about anyone seeing him. On one side of the island he might save a beached whale, and on another he can fix the fish-drying rack that’s lying in a heap. He’s still getting used to his newfound powers, so sometimes things don’t go exactly as planned, but for the most part his presence on this island has a positive effect on its residents. 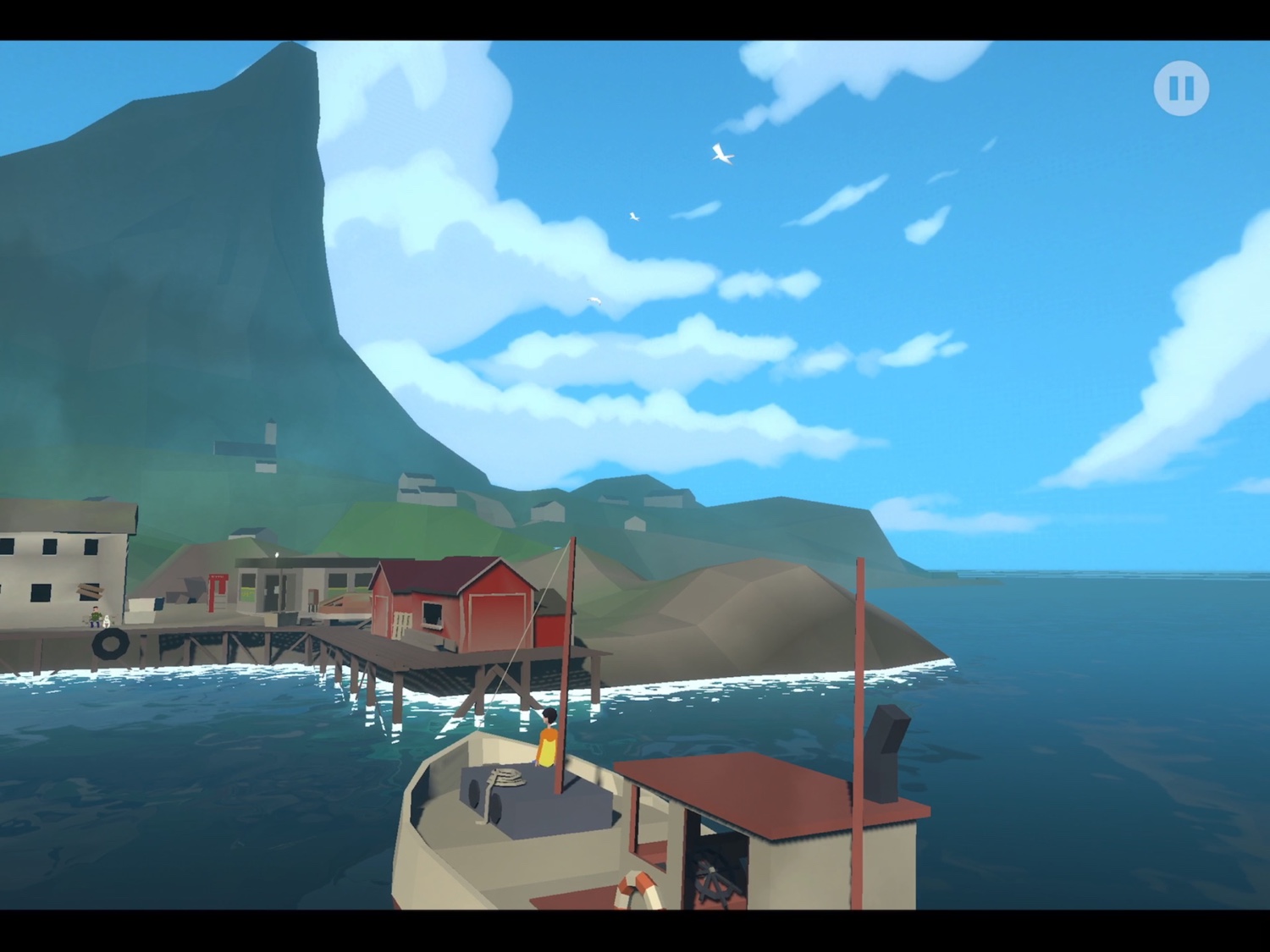 One of the best parts of the game is the relationships Jesper builds while on Slepp. Aside from meeting folks who knew his grandfather, he befriends two other kids his age, one girl and one boy. They give him a tour and take him to the highest peak on the island and make the whole trip a lot less daunting for him. Karoline loves Slepp and can’t see living anywhere else, while Hermod is bored out of his mind and is itching to leave at the first opportunity. It’s up to the player to decide who Jesper should spend more time with and whether their relationship should be romantic or purely platonic. I appreciated how progressive the game is, as Jesper can be straight, gay, or just not interested in that kind of relationship right now and those are all perfectly valid options. In general, the game gives the player enough room to make it feel their own through some simple dialogue choices. 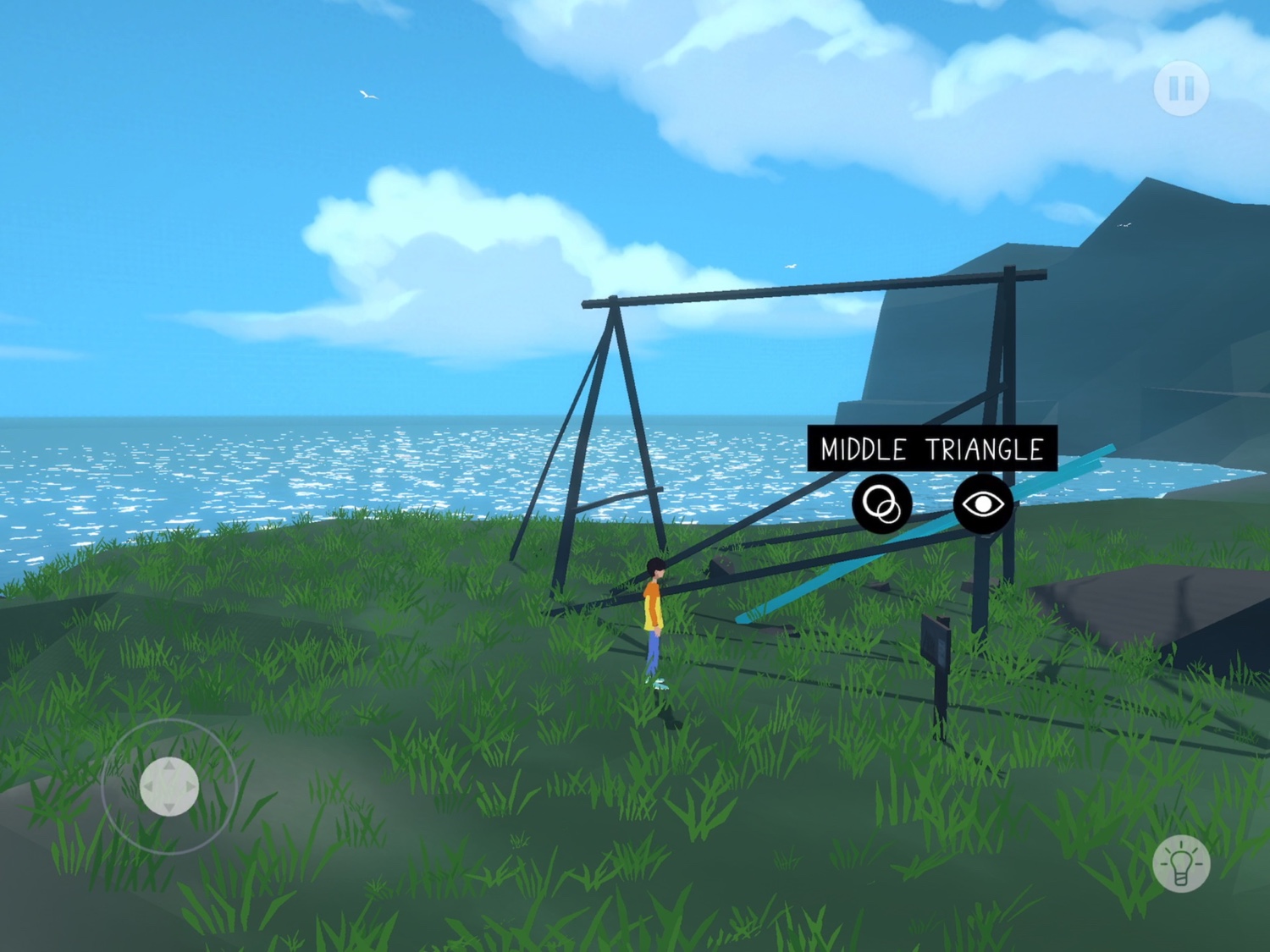 Let’s talk about the controls, because that was one area where the game suffered for me. I played through it on my iPad, and the joystick for movement is all the way down by the corner of the screen, making it awkward to hold my iPad while using it. Ideally a game like this would have a floating joystick or at least allow for customized placement. Besides that, Jesper often just walks like he’s drunk, but it does seem worse on an iPad than an iPhone. Since it isn’t a long game and doesn’t require precise movement, I just stuck through it while occasionally cursing. But the camera is also an issue, and at one point it gave me a bad case of motion sickness. The problem is that the player can’t control the camera. Instead, it’s set to behave a certain way depending on where you walk. So sometimes it might face the direction Jesper is facing, while other times it’s the opposite. There was one particular section that was a fairly big open area, but the only way to look around was to turn Jasper physically. This is where my stomach went reeling. The movement and camera were by far the worst part of the game for me and I do hope they can be improved in the future. To an extent, I understand why they are they way the are but that doesn’t make them much easier to accept. 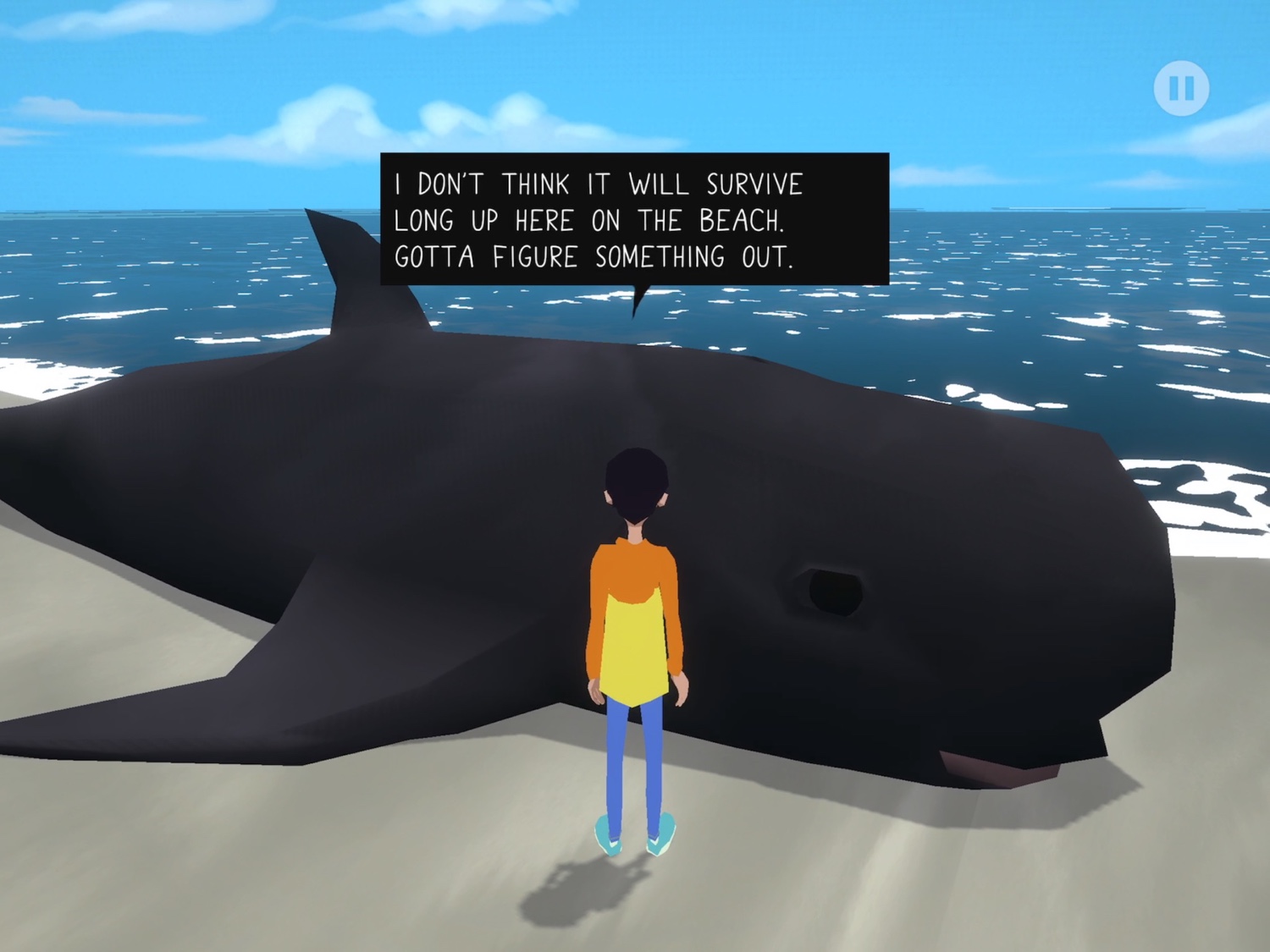 Aside from moving, you can interact with objects by tapping on them and then selecting the “eye” icon for a description or to pick them up, where applicable. If it’s possible to use the bracelet on an object, there will be a second icon available that will allow you to use the bracelet’s power to try and move it. That will trigger a quick time event (QTE) in which you need to tap the screen as the two blue rings meet in the middle. I messed up a bunch of times while getting used to the timing, but once I got it down I almost never failed again. You also have unlimited attempts, and if you really find it too difficult you can make that easier in the settings. There’s also a hot spot locator to help identify interactive objects so you don’t have to go pixel hunting. Both the QTEs and interacting with objects in the environment felt natural on a touchscreen, so it’s disappointing that the movement couldn’t have been adapted better. 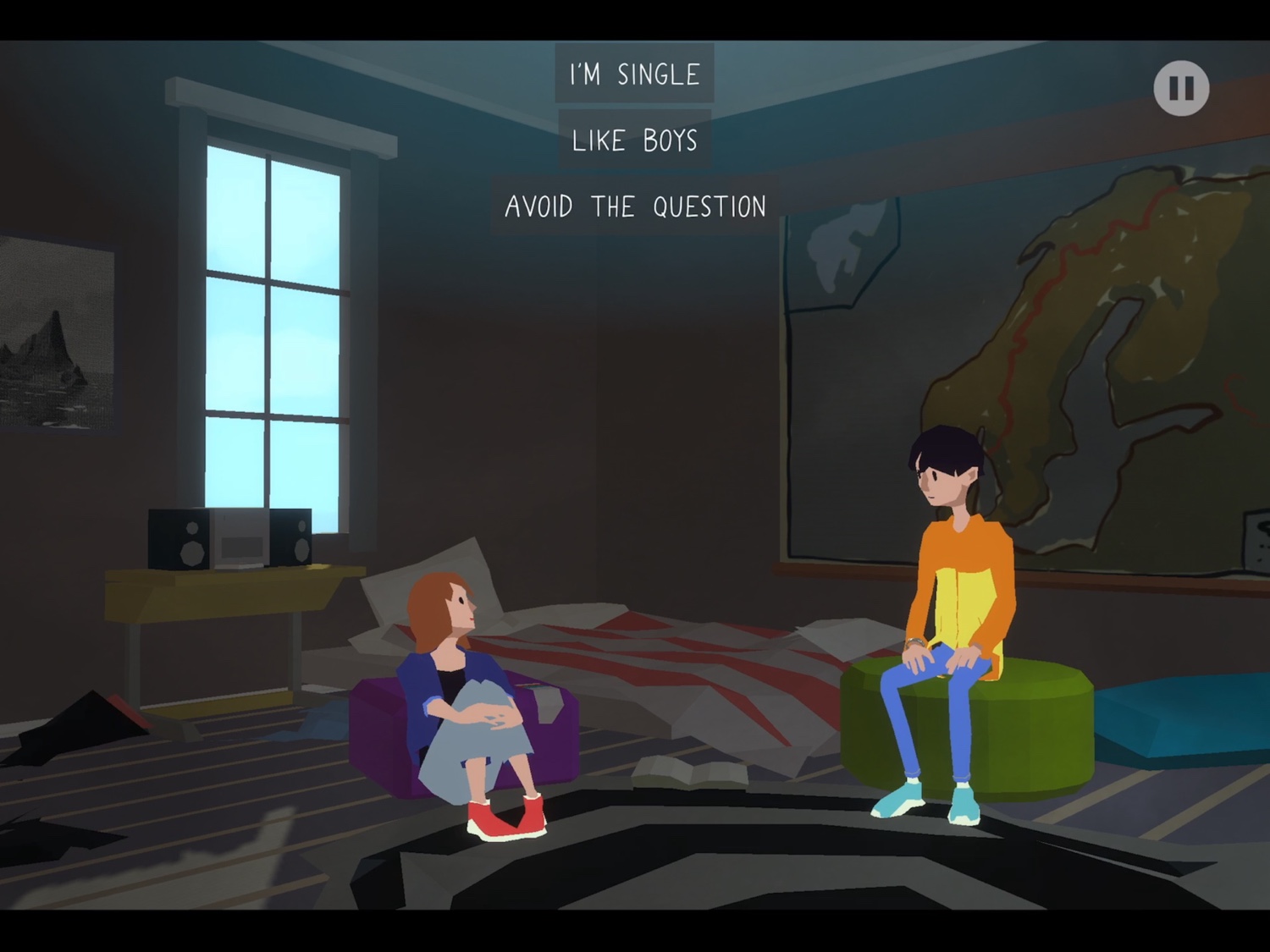 As far as the puzzles go, I enjoyed most of them — especially the one with the dog — but found a few of them a little annoying, mostly because of the camera. For instance, I was stuck on an excavator puzzle because one crucial item was just off the screen and required standing in a very specific spot to see it. Again, if I had control over the camera, I might have spotted it sooner and wasted a lot less time. The puzzle itself was otherwise enjoyable, but somewhat soured by the cheap way it boosted the difficulty. At another point, I needed to fix the electricity for a specific house and I was sure I saw a transformer nearby. But instead of being on the same screen with the house, it’s in this weird in-between place that’s just out of view while in front of the house and easy to go right past if you take the path where it’s visible. So again, I kept running around, not sure why I couldn’t find it again. Once I located it, the puzzle itself wasn’t difficult. So the camera controls — or lack thereof — created unnecessary frustration in what should be a pretty relaxing game. In general, I enjoyed using the bracelet to move and fix objects and they fit well with this style of game that’s not meant to be too demanding. 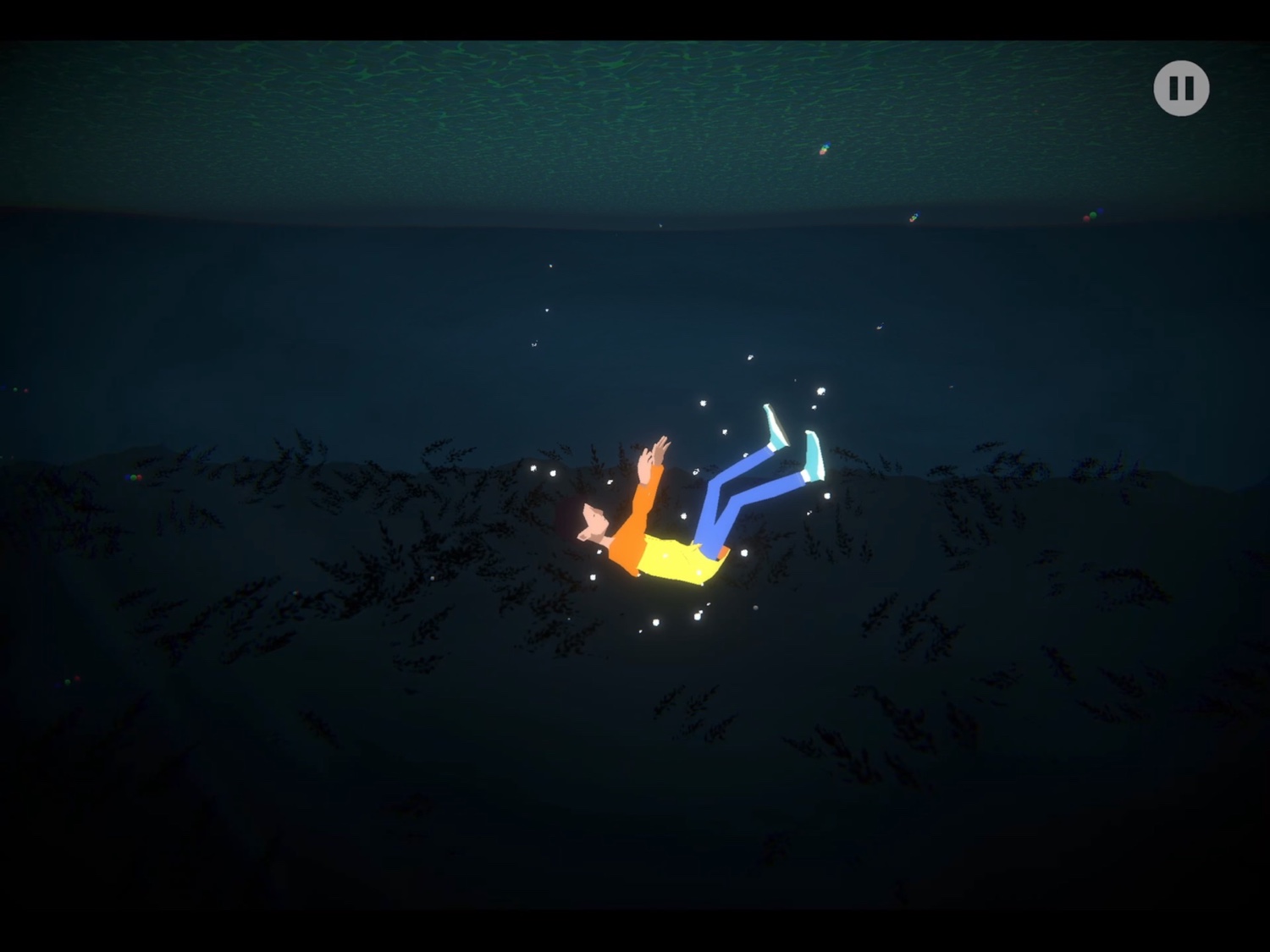 I also like that there are a lot of side puzzles that you can choose to work on or ignore. I believe you’re rewarded for solving them all, though I missed a couple so I can’t say for sure. I never found five coins to call my poor mom who must have been worried sick. And I meant to go back and take another crack at a gravestone puzzle, but I got sidetracked by the story and by the time I thought to go back to it it was too late. I think I solved all the rest, but it’s hard to tell without the achievements that are found on other platforms. I’m not sure why this seems to be a trend lately, but a lot of iOS ports have been leaving out achievements even when they’re a crucial part of the game and help guide you towards Easter eggs and side quests.

I do know that there are three possible endings, and I would love to play the game again to see another one and also try to complete the puzzles I missed the first time. But between the controls and the lack of achievements, I can’t really see doing that. I also encountered a bug a couple of times where Jesper was stuck walking straight into something. And due to the infrequent save points, I ended up having to redo sections to catch up to where I was. I’m hoping an update in the future might fix all these issues at least somewhat and make it more palatable to replay. I’m still glad I played through it once and would highly recommend it even with its shortcomings. 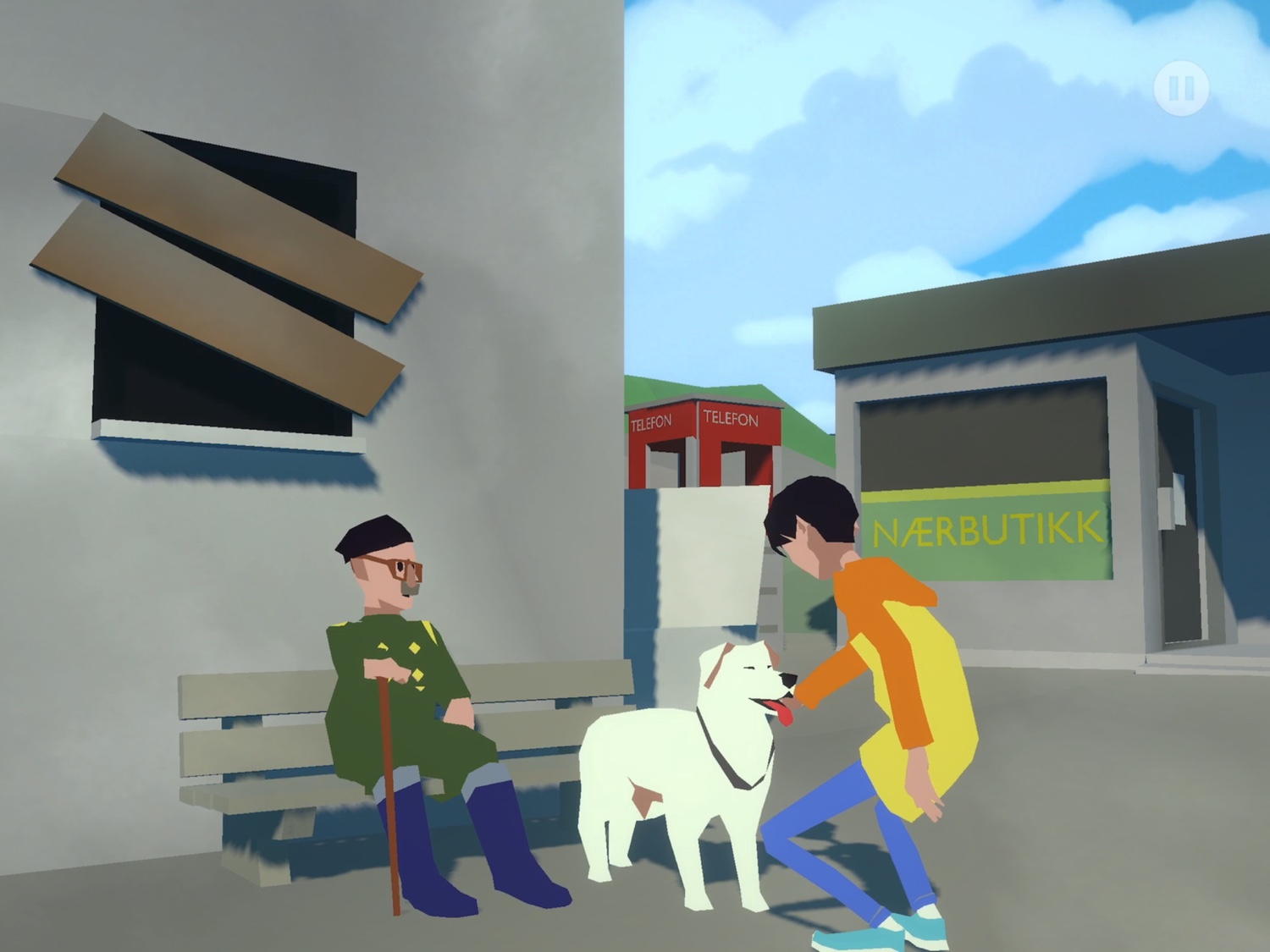 Embracelet is a lovely puzzle adventure game that touches upon progressive issues and is inclusive both in its difficulty level and its dialogue choices. You can even pet the dog! I’m glad I got to play it on my iPad and help Jesper solve the mystery of his magic bracelet while building life-long friendships in the process. The control and camera issues are a bit of a hindrance to an otherwise excellent game, but if you can manage with them, it’s very much worth playing. And since the camera design seems to be built into the game, I don’t know that playing on other platforms would fix that anyway. It’s just something you have to put up with in order to enjoy this experience. If you’re able to look past its flaws, grab Embracelet here and help Jesper fulfill his grandfather’s dying wish.