I know it’s common these days for people to say “get politics out of my games,” but personally I love social commentary in games as long as it’s not shoehorned in. So it shouldn’t come to much surprise that I was excited to play a game based on George Orwell’s classic novella, Animal Farm, which is an allegory using animals to warn of the dangers of authoritarianism. Sadly, the story is still very much relevant in 2020, which is probably why developers Nerial and The Dairymen decided to make it. A game can be a great way to introduce important works of art to a new audience. However, while there is much to like about the game, especially the artwork, soundtrack and voice acting, the best thing I can say about it is that it got me to re-read the book.

For those of you who’ve never read Animal Farm, the story is about Manor Farm, where the animals get sick and tired of being mistreated by the farmer, Mr. Jones, and start a rebellion, chasing off all the humans. They decide that their lives would be much better off working for themselves and benefiting from their own labor, since they’re the ones who work the hardest while humans just sit around and reap the rewards. It is the pigs who incite the rebellion, and they’re the ones who take charge when the other animals seek leadership. They write up the seven laws of Animalism, including “Whoever goes on two legs is an enemy” and “All animals are equal.” These are the tenets by which they manage the farm, at least at first. Unfortunately, the smarter animals take advantage of the others and eventually the law changes to “All animals are equal but some animals are more equal than others.” I think you can see where this is going and how it’s relevant even today. 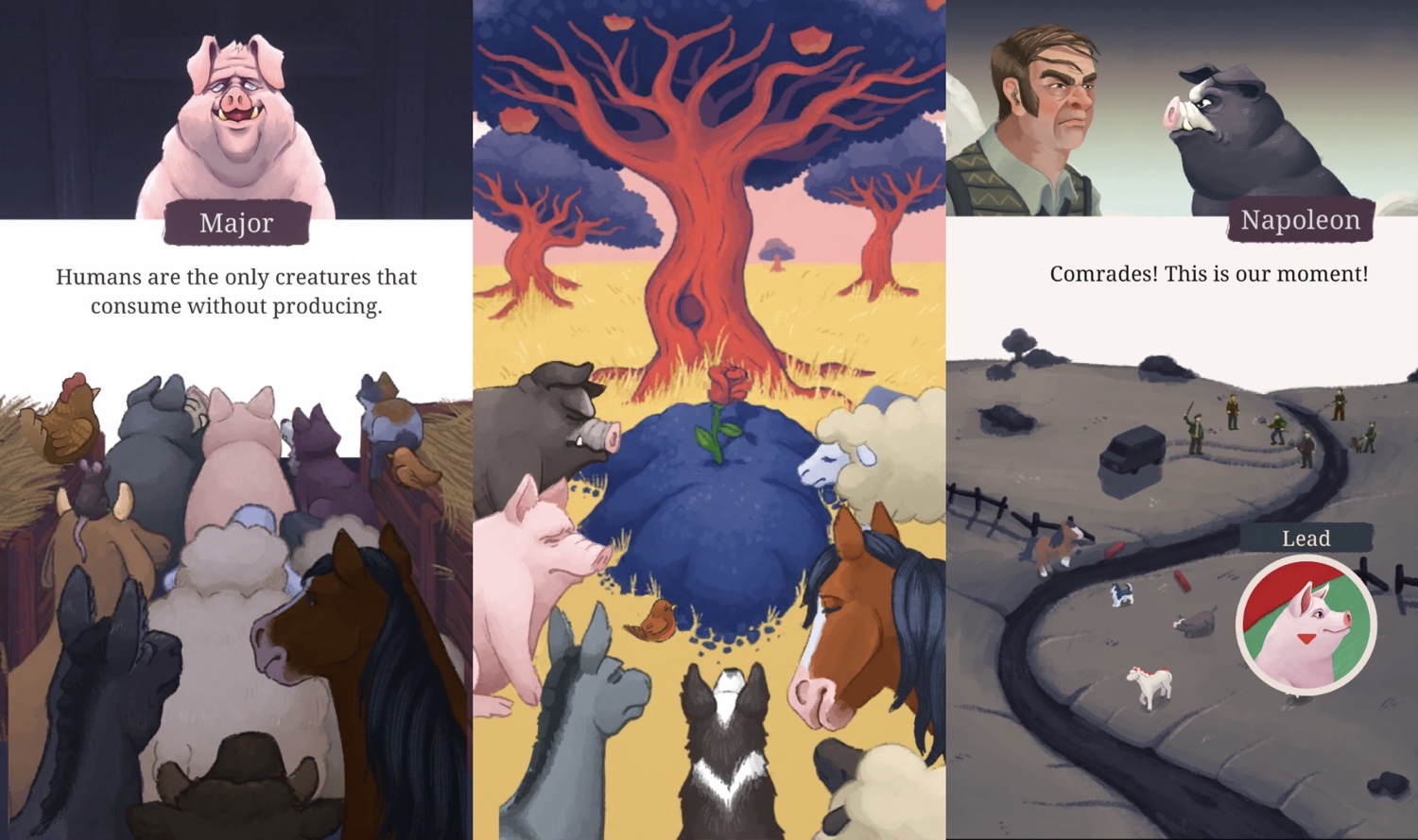 As I said, the game features lovely artwork, even if most of the game is spent staring at the farm itself. The changing seasons are visually represented, and certain events also take us to different parts of the farm, like inside the barn where everyone gathers to vote on issues. All the animals have character, and the game is just overall very easy on the eyes. The soundtrack is also varied enough that I never tired of it without it being distracting — except for a few rare moments where it drowned out the fantastic narration from Abubakar Salim. I couldn’t find any settings to adjust the levels, but it’s really a minor issue. The presentation is spot-on and everything I could have hoped for. I especially appreciate the efforts that were taken to adapt it to fit landscape on iPad and portrait on iPhone. It looks great on both devices and neither one feels like the wrong platform to play on.

I also had no complaints about the controls, as they work particularly well on touchscreens. In between narrative bits, the game will pause and you can swipe your finger around the screen to look for interactive spots. Usually you’d be hovering over an animal to let it speak or to choose who should work that day or what type of action a specific animal should take. When you’ve decided on one, you simply highlight it and then lift your finger to select it. I like that this allows you to take your time thinking about your choices without having to confirm every time you select something. It keeps things streamlined and moving at a decent pace. 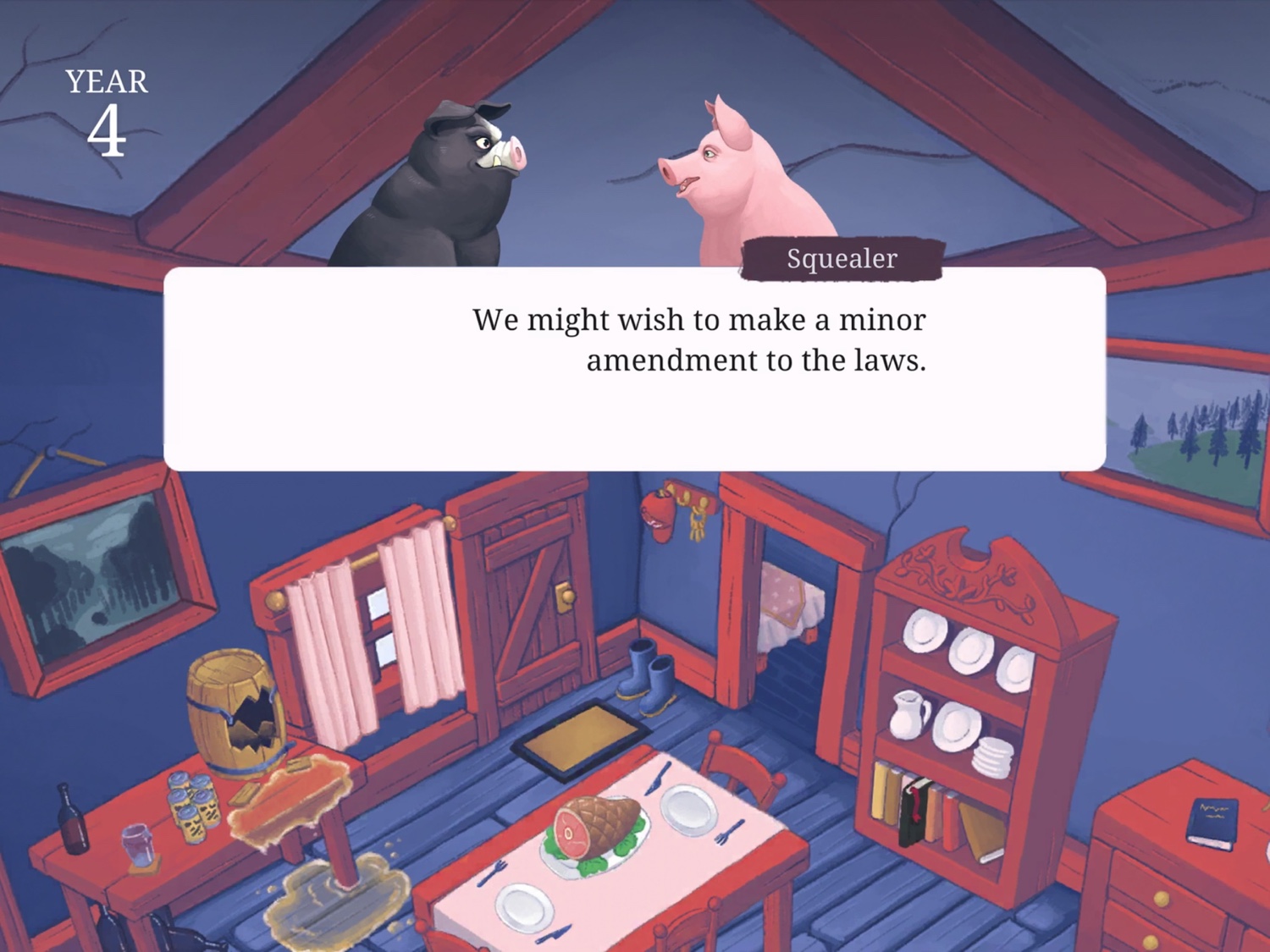 I was less impressed with the mechanics and overall structure, the way it tries to combine resource management aspects with choice-based narrative and branching paths. The main goal is manage your farm and keep all the animals happy and fed, at least enough to survive seven years. You can stray somewhat from the plot of the book, but some events appear to be unavoidable, at least based on the three times I’ve played through the game. If your animals die off before the seven years, you’re unlikely to see the full story play out. But even if you do make it that far, it’s easy to miss many plot points. On my first run, all my animals starved to death on the fourth year and I got one of eight possible endings. That prompted me to re-read the novella, since I hadn’t done so since high school. I then played the game a second time, comparing the two as I made it all the way to the seventh year and the true book ending.

On that second playthrough, I managed to hit more plot points from the book, but also missed out on others. The message was also very watered down and, as a result, less effective. Actual quotes from the book are used throughout the game, but you’ll usually get a couple of lines instead of entire paragraphs. So, at least the in time I spent with it, Napoleon, the authoritative pig who declares himself leader, and his right hand, Squealer, never come off quite as evil as in the book. Part of the reason is because you’ll miss many of the truly disturbing parts unless you play through the game multiple times and exhaust all options. So if you play only once or twice and never read the book, you don’t really get the full picture. I was hoping for more of a visual novel but instead developer Nerial has tried to apply their Reigns mechanics to a game that doesn’t really work with it. The alternate paths, from what I’ve seen, aren’t that rewarding and, to get the full story, you’d have to spend far more time with the game than you would just reading the short novella. 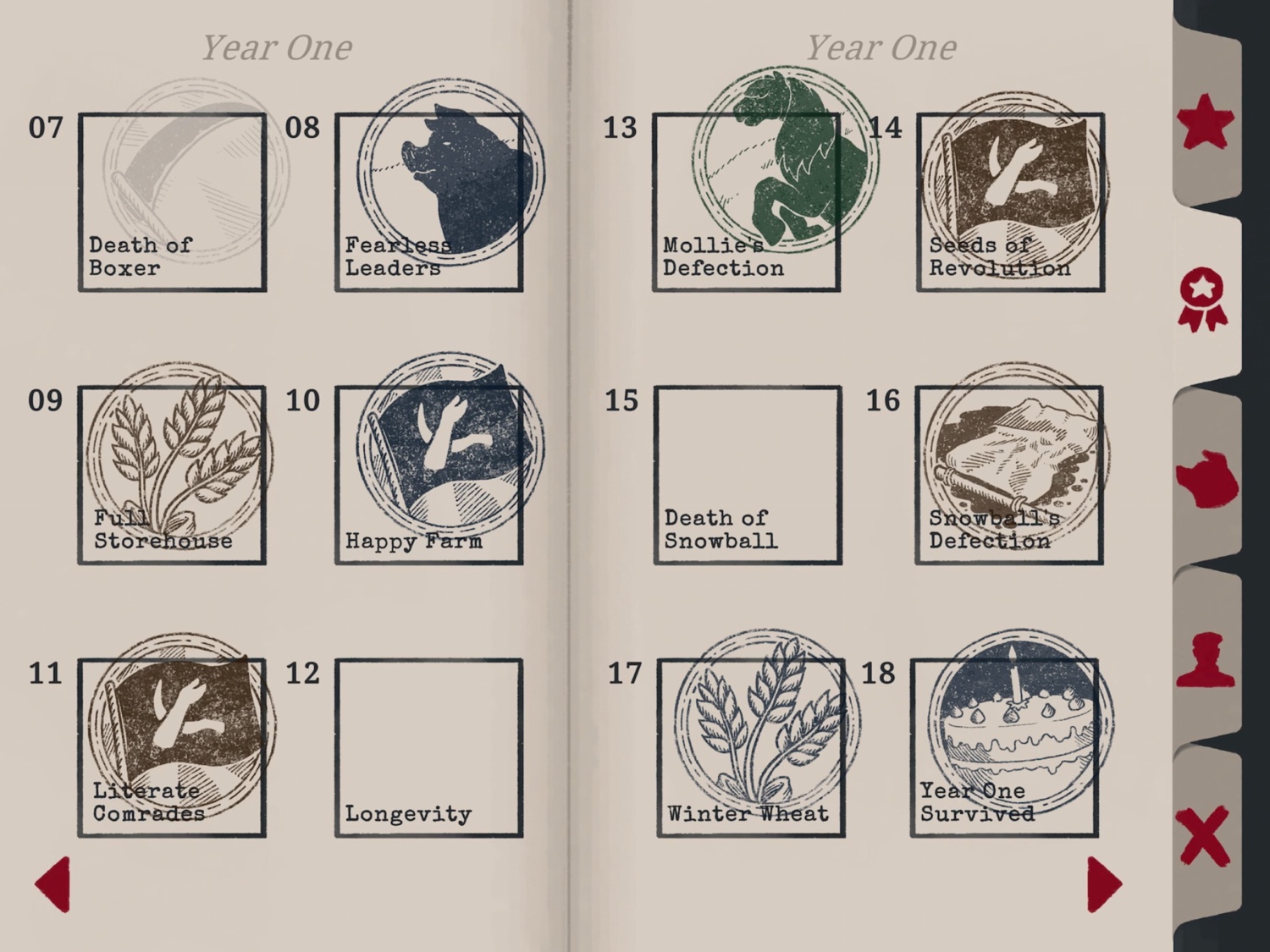 On that second playthrough, some events were also out of order when compared to the book. This is spoiler territory if you haven’t read it, but at some point the pigs learned to walk on two legs, everyone was shocked, and then they all forgot about it for a good long while until I made it to the seventh year and got the ending that has all the other animals reacting to the pigs’ alarming new behavior. Also, some random events repeat too often, which was already problematic in Reigns, but at least there you have the high score aspect to excuse it. In just about all three of my playthroughs, I got the same event about the rats stealing food at least three or four times, and there are only three possible responses to it. At one point I even got that event when the only option available was one I’d already chosen before. What’s worse is that the responses to that event don’t really make much sense and don’t seem to reflect the story much, if at all. It’s understandable for things to repeat on subsequent runs, but when it happens so much in a single playthrough, the whole facade starts to crack. 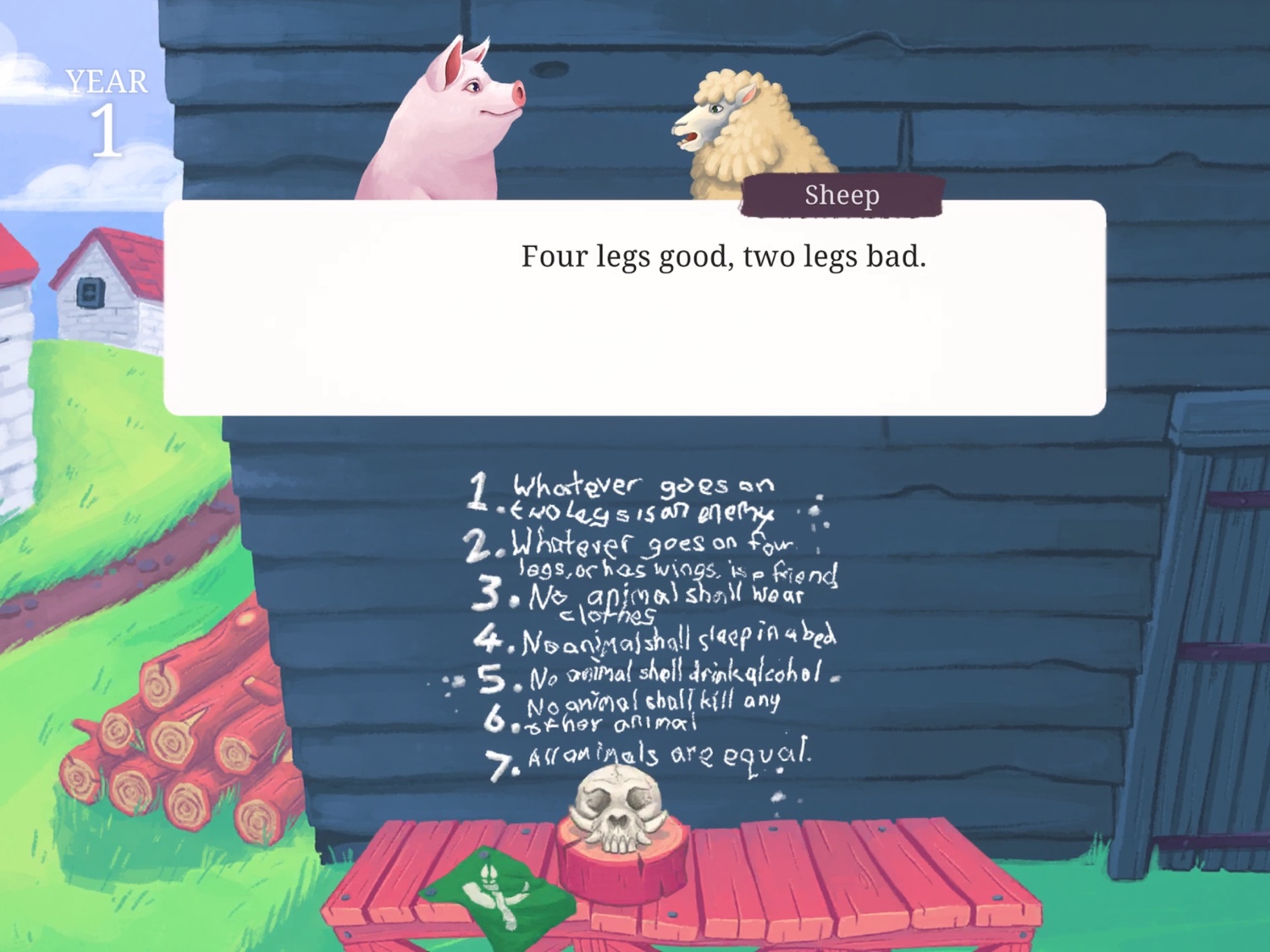 I thought I was done with the game after two runs, but part of me was still curious as to what other subplots and endings I could unlock, and I still had a lot of achievements left to find. So I set out for what would hopefully be a quick third playthrough where I’d focus less on trying to survive and just keep an eye out for things I hadn’t tried yet. I did manage to trigger some more scenes from the book I hadn’t gotten before, but I wasn’t always sure how or why. I also had events repeat themselves in an utterly broken way. For example, I had already built the windmill months back, but somehow later triggered the same event telling me the windmill was finally built. I also encountered a few instances where the narrator repeated himself right away. On top of that, I got the achievement for Napoleon dying, even thought he was still very much alive. I went into the third playthrough already somewhat reluctantly, and it convinced me that I’m definitely done with the game now. Considering the time investment, you might be better off just taking the same — or less — time to read the book.

At least in its current state, Orwell’s Animal Farm doesn’t really hold up well as a game with branching narratives. There’s too much repetition and not enough guidance as to how your decisions affect things. It’s also hard to remember between runs which choices you made at each exact moment so you don’t repeat them. As much as I wanted to like the game, in the end it just felt flat compared to the book. I wish I could recommend buying it and playing through it just once, but you’re likely to miss out too much that way and multiple runs aren’t satisfying enough. To some extent, I wish they had just used the game to offer a straight retelling of the novella instead of trying to gamify it so much. Or, at the very least, made a choose-your-own-adventure where you aren’t guessing so much as to the outcome of your choices. If you do decide to play it, please read the book either before or alongside it for the best experience.