It’s hard not to take notice when you see some screenshots from puzzle adventure, Inked, by Somnium Games. The entire game is made up of ballpoint pen drawings and it’s a striking visual effect. I initially thought the art style was mostly a gimmick to stand out — though a powerful one — but the game surprised me in many ways. The story is weird and unexpected and I’m not sure it always achieves what it sets out to do, but I appreciate that it attempts to do something different. Both the puzzles and the narrative kept me interested from start to finish and make the game pretty easy to recommend to puzzle fans.

The story follows both the Nameless Hero and the Artist who created him. Peace has come to the land, so there is no need for his sword anymore. Instead, he picks up a pen and uses it to influence the world around him and get past obstacles. Yes, you might be thinking now of that old adage that the pen is mightier than the sword, and that would definitely ring true in this case. But the question is, who is wielding that power? The Hero and his beloved, Aiko, soon notice that birds are dying and head out to try and save them, discovering some dark truths about this world. In the end, what starts off as a pretty straightforward journey becomes a tale of love and loss, both his own and that of the Artist himself.

The puzzles in Inked consist primarily of getting the Nameless Hero past obstacles so he can continue his journey. For the most part, the touch controls work well, though there are some hiccups. You tap to move him anywhere in the environment, and as long as there’s a clear path for him, the game’s path-finding technology will make him automatically follow it. Then, there are certain objects the Hero has to interact with directly, such as a box on wheels. He can push this around and then use it to fill a gap or hold down buttons that open doors or lift platforms. He also needs to interact directly with switches and levers. Besides that, there are shapes that you can move around and rotate that are not bound by the same rules of physics as the Hero or the other objects. Wherever they are, you can simple tap and drag them to move them around the environment. Use a second finger to tap the screen to rotate that object and then place it where you need it. 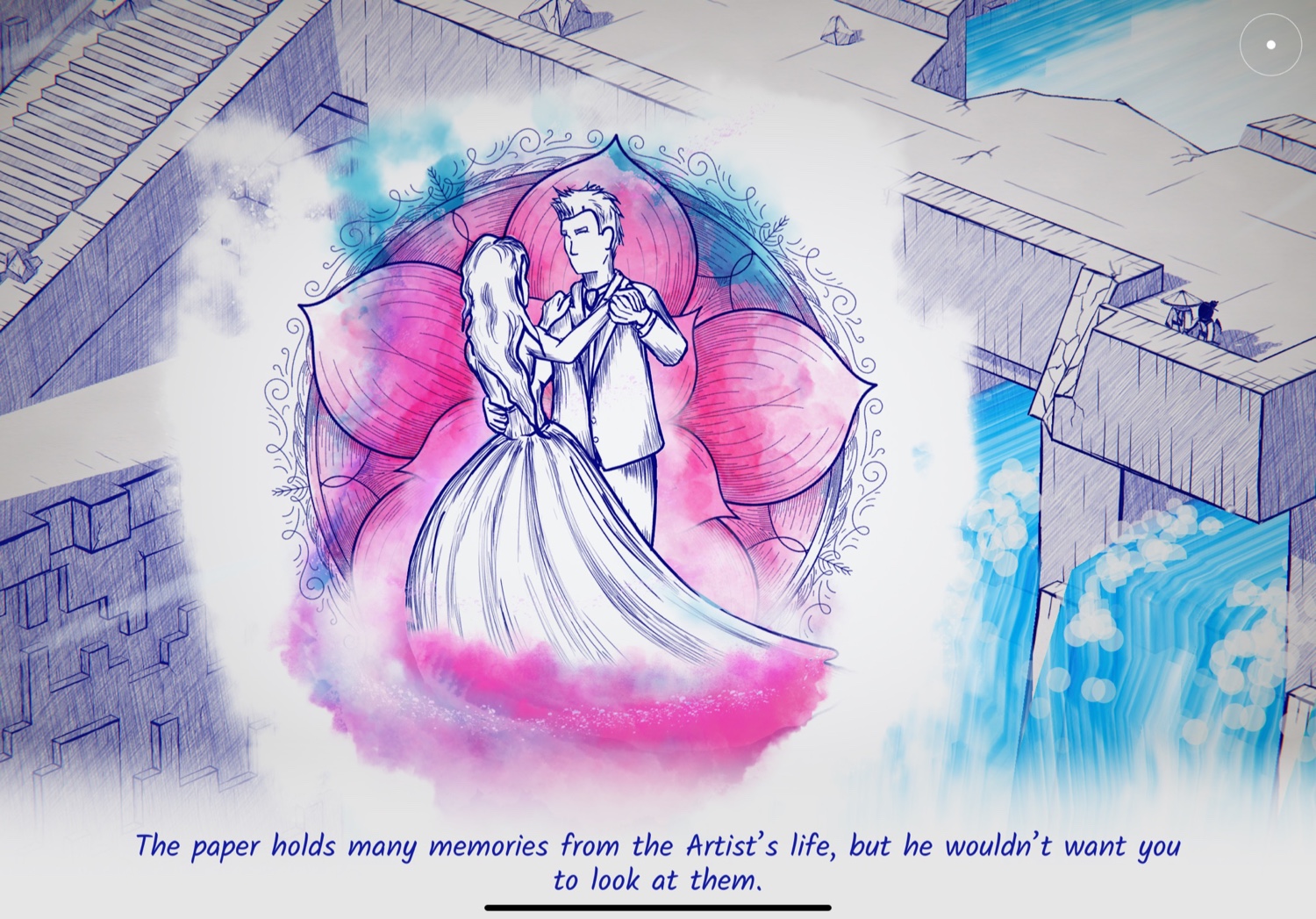 Those shapes could be a simple box that’s used in similar ways as the original, but without the constraints of needing the Hero to move it around. But there are also ramps you can place so the Hero can reach platforms that are just a bit out of his reach. There are also balls you drop onto a ramp so they can roll. Further along, you’ll encounter fans that move objects by blowing air at them and even fire that you can use in multiple interesting ways. I don’t want to ruin all the surprises, so I’ll let you discover the rest for yourself. But I was impressed with the variety of mechanics in the game.

Usually, when you encounter a new object, the game will provide a short tutorial on how it works. But sometimes you’re left to figure things out on your own. That can be both a blessing and a curse, as some are rewarding to figure out. But a few mechanics were a bit too obtuse for their own good and made certain puzzles unnecessarily frustrating. Also, placing the shapes can be fiddly at times, especially the flat one that’s used as a bridge. That said, very few puzzles involve any timed aspects, so you can just relax and work things out at your own pace. Any quirks with the controls can be overcome with a bit of patience, but I hope they get refined in an update.

Aside from the puzzles themselves, there’s some replay value in trying to find all the hidden paintings in each chapter, totaling more than eighty. I have some mixed feelings about this, as looking for them on your first playthrough stalls progress and breaks the pace of the game. You want to keep moving along to the next puzzle, but you also don’t want to miss out on the paintings. If you do miss any, the only option is to restart the chapter from the beginning and try to find them. The game doesn’t give you any information that could help you figure out where you missed one, and there’s no way to select a specific part of a chapter where you think it might be. Considering how well-hidden and intentionally tricky these paintings are to find, this could mean replaying the same puzzles over and over until you find them. There’s no way to pan the camera around, so the only way to examine an area is to have the protagonist walk to a spot that will make the camera follow him. Once you move on from a puzzle and an area, all you can do is restart the chapter to get another chance at finding the missing paintings. 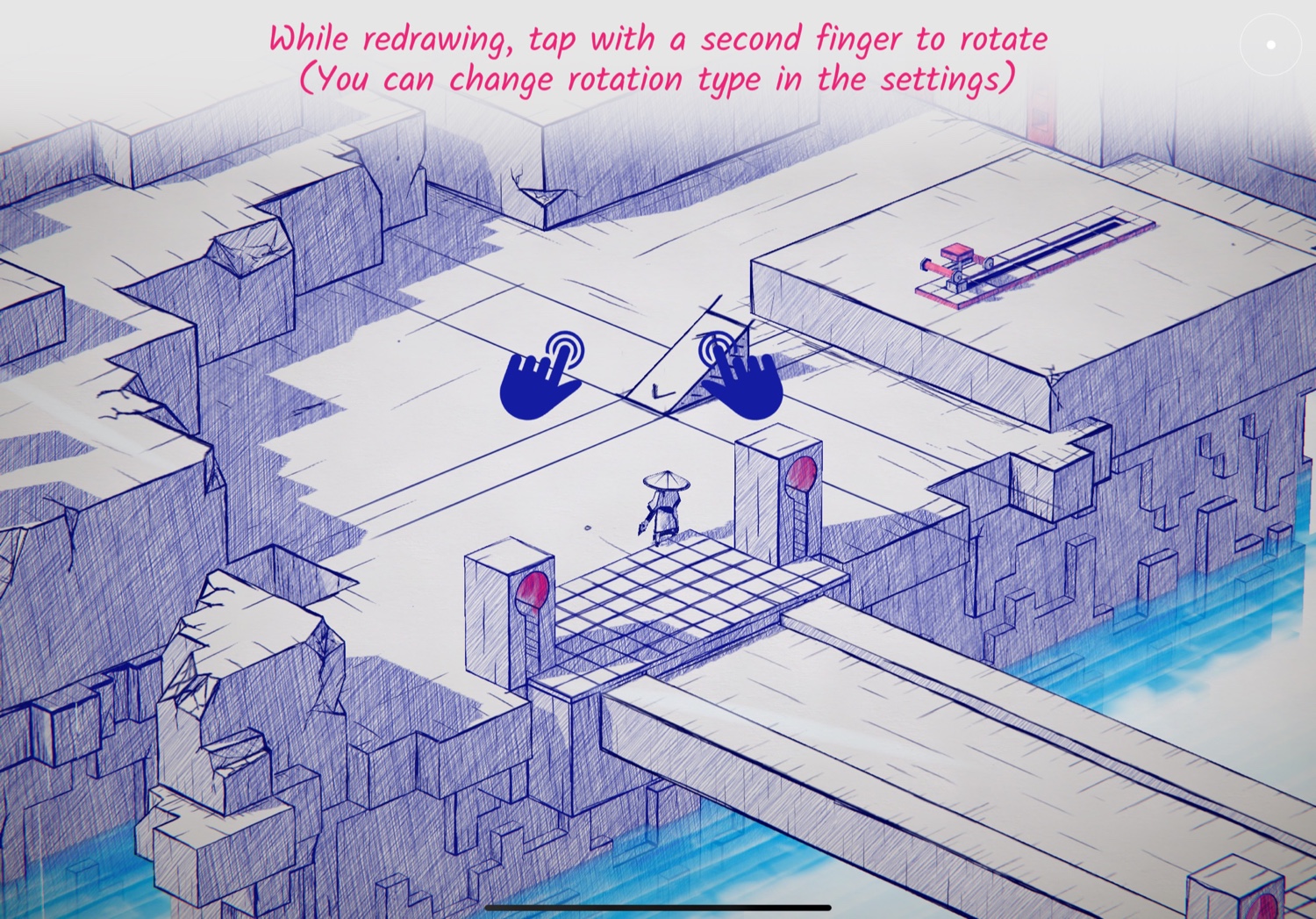 Additionally, I noticed that at least one painting was completely off the screen on my iPad and I only knew where to find it because it’s clearly visible at the start of the chapter on my iPhone. And on the flip side, some paintings are so hard to see on my iPhone because of the screen size and I only knew where they were because I found them on my iPad. Considering the game was designed specifically for mobile, I find it strange that all screen sizes weren’t taken into consideration when hiding the paintings. Also, tapping on a hidden painting makes the Hero try to move to that spot, which can get a bit annoying, since there are over eighty paintings to find in the game. It should be fun to look for these extras, but there’s so many obstacles in the way that I wouldn’t blame most people for just ignoring them and moving on.

Let’s get back to the positives. The visuals are, of course, a big highlight of the game. I especially love how the birds’ heads look like calligraphy pens. The blocky makeup of the environments also grabs attention, giving it a very distinctive look and feel. You’ll also visit different settings, including a swamp, desert and frost land, each with their own mechanics that fit the theme. The voice acting of the narrator also stands out, as does the soundtrack. I paused a number of times to listen to the music, and it helped keep me sane when revisiting chapters to look for the hidden extras. 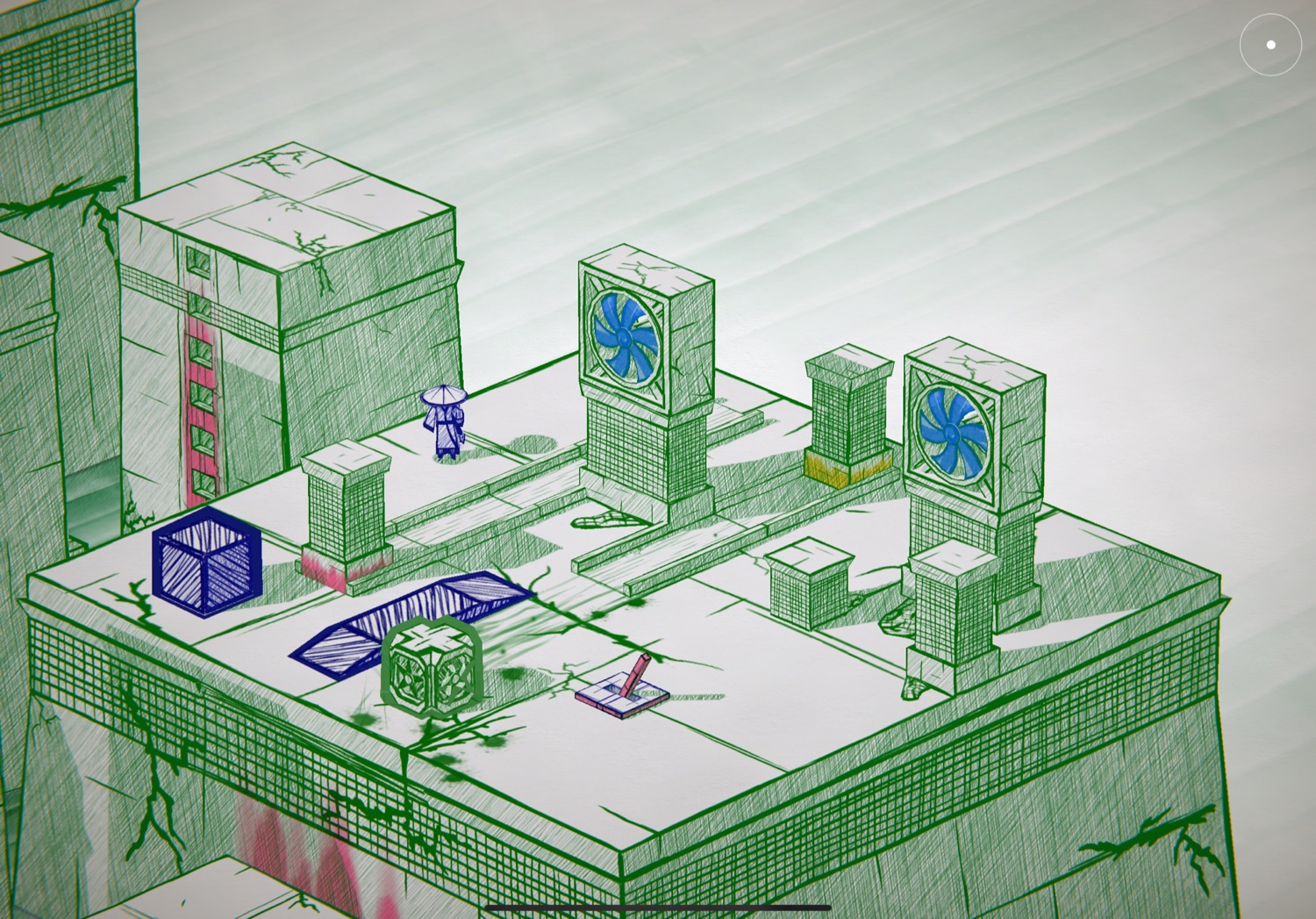 Like I said, the story takes some unexpected turns. For the most part, I appreciated this, but found it a little frustrating that the game berates you for negative results of your actions without offering any alternative. In most cases, you’re not even aware that your actions will cause any harm. All you’re doing is solving a puzzle and then the result is that unforeseen destruction. It would have been more impactful if I’d been given all the information and the choice whether to follow through. I’m also not sure why there’s an achievement for completing the game twice. I was able to get it just by completing the epilogue again, and the game doesn’t give any indication that starting a new game, as opposed to selecting a chapter, would give you the opportunity to change things. If there is some sort of new game+ option, that should be made clearer. If not, the achievement seems like an odd afterthought or perhaps something leftover from a different version of the game.

Speaking of which, I should mention that the mobile version of the game is very different from the PC version that released a few years back. I haven’t played it myself, but I did watch some video out of curiosity, and it’s completely different. I’m not sure if the two are meant to coexist or whether this new one is meant to replace the original. Either way, don’t bother reading up or watching gameplay of the PC version to decide whether to buy the mobile version. The only thing they really have in common is the art style and some story elements. 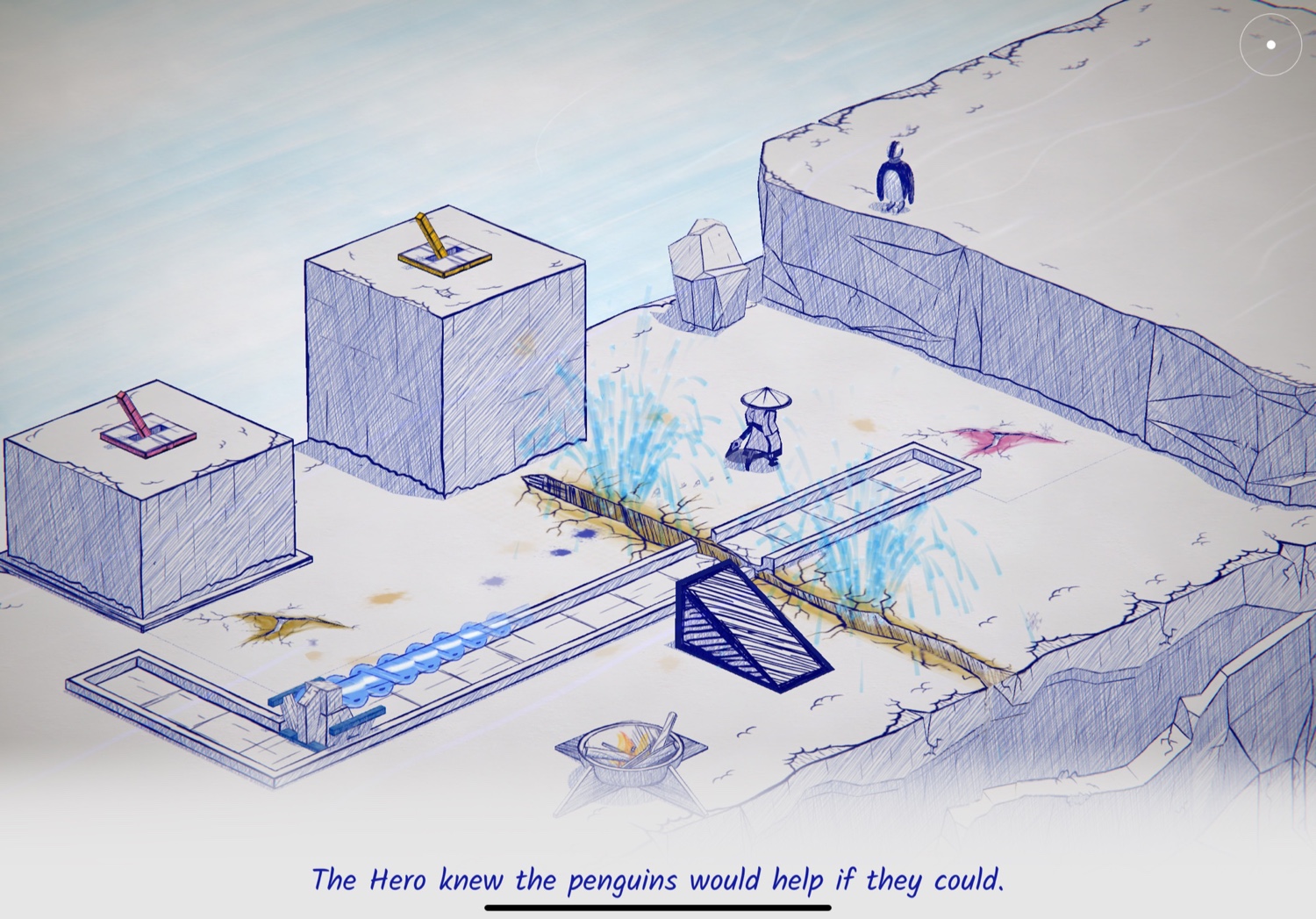 Overall, I enjoyed my time with Inked, though I think some aspects could have been better implemented. It’s mostly a great fit for mobile and I appreciate that the developers took the time to rebuild the game from the bottom up for the platform. The story is odd at times and will resonate with some more than others, but I’m glad it wasn’t a typical tale of a Hero setting off on an adventure. The twists and turns kept me on my toes and also provided some substance. In the end, I would recommend the game, as it has a lot to offer, but I might suggest ignoring the hidden paintings if you don’t have time to keep replaying the same puzzles over and over until you find them. If this all sounds good to you, grab Inked here and help the Nameless Hero on his journey.

If you get stuck on any puzzles or need help finding some of the paintings, try my guide.