inkle’s Overboard! doesn’t waste any time getting straight to the action. It starts with you, Veronica Villensey, pushing your husband, Malcolm, overboard while traveling by cruise ship to 1935 New York. It sounds like he deserved it, but that might not be how the other passengers see it if they find the evidence. So you need to spend your remaining time on the boat figuring out how to get away with murder. Aside from a great hook, it has tons of replay value, since there are so many different ways the story can go depending on your actions. If dark humor and puzzling your way through a reverse murder mystery appeals to you, then you’ll enjoy yourself aboard the SS Hook.

Each time you start a new game, you’ll begin your day in your cabin at 8am with the steward knocking at your door and informing you it’s breakfast time. You need to decide how to respond. Do you send him away? Invite him in? Or pretend to be your husband so he doesn’t suspect he’s gone? Whatever you choose, he’ll remember it later. So if you pretend to be your husband sick with a cold, and then later say you hadn’t seen him since the night before, he’ll know you were lying about something. So keeping your story straight is one part of the puzzle. But then there’s also the problem of your missing earring that someone might be able to use to place you at the scene of the crime. There are lots of little details that come together and lead to a specific outcome. 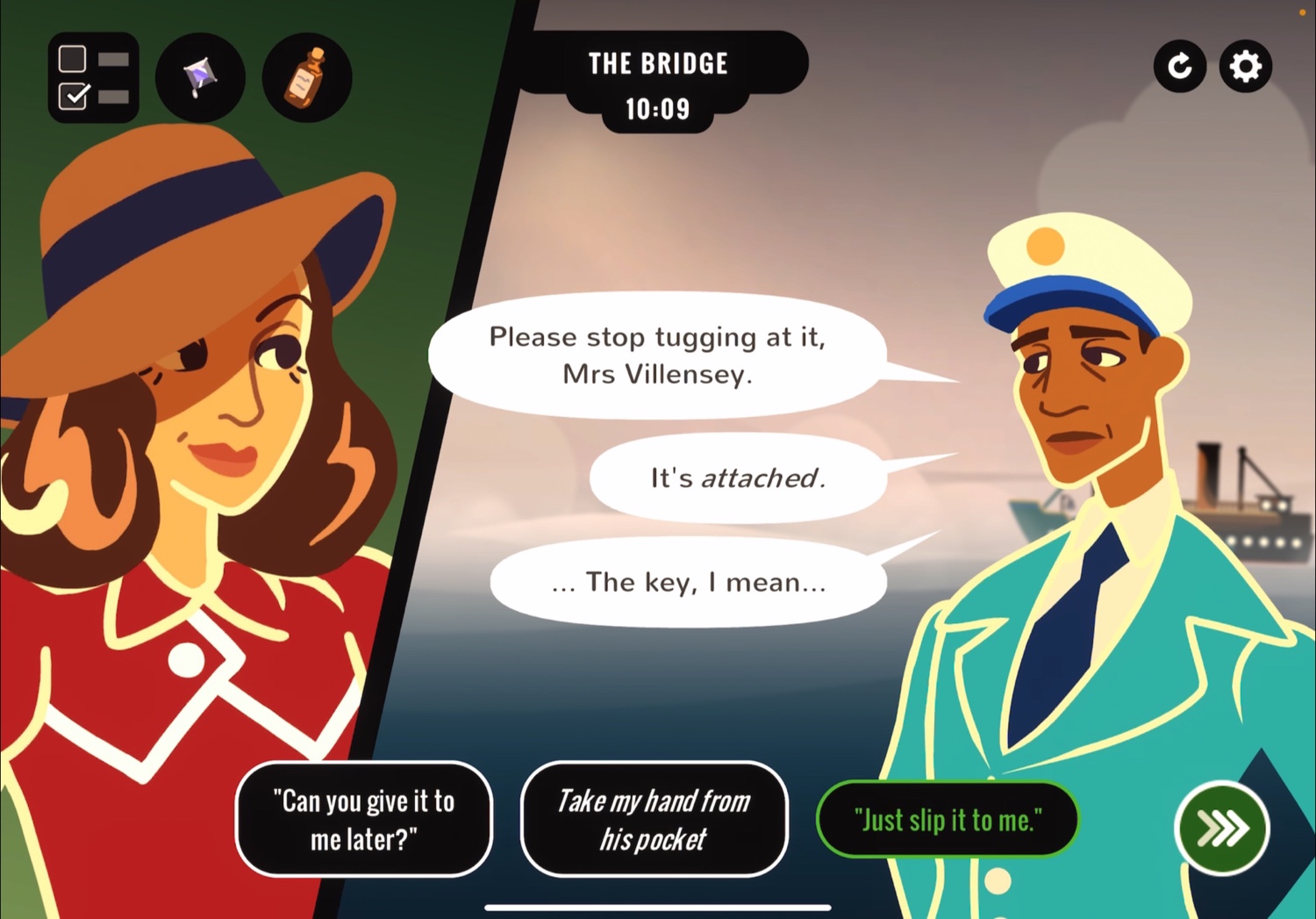 Once you leave your cabin, you can choose one of several locations to visit. Depending on the time and circumstances, you might bump into a certain passenger. Maybe you can convince them to help you by blackmailing them. Or maybe they’ve caught onto you and your only way out is to kill them, too! There’s so many different ways it can play out and one small detail can change everything. Once the eight hours are up and you’re close to New York, you’ll see if your plans pan out and you’re able to get away with murder, or the passengers see through your lies and send you to prison. Even if you do get away with it, some endings are better than others, so there’s always that urge to play “one more game.” And sometimes a bad ending will still provide information you need for a good ending. 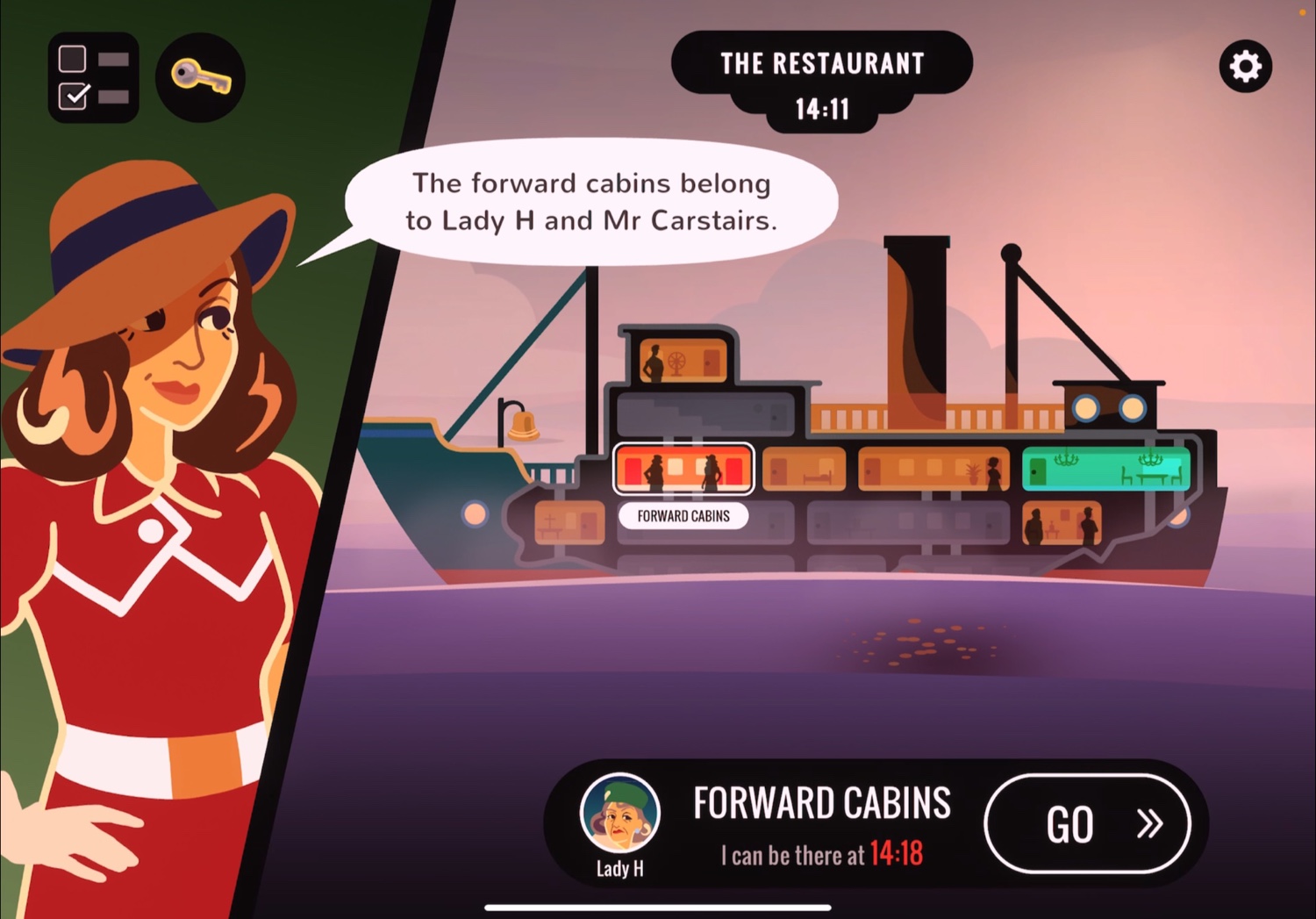 What I love the most about Overboard! is its humor and absurdity. There are lots of play-on words, like Villensey (villains sea) and the name of the ship being the SS Hook, meaning you’re trying to get off the Hook. There are dirty jokes a-plenty. Then, on my first playthrough, I killed two other passengers who seemed to be on to me. But it was so easy because they were willing to look over the railing despite their suspicions that I pushed my husband overboard. It means that there’s plenty of fun to be had even if you don’t manage to “win.” In fact, sometimes I’ll knowingly sabotage myself just to see what happens. And that’s perfectly fine. If you prefer to just play for the fun of it and not try to solve the puzzles, that’s a valid way to enjoy the game. I myself have managed to frame someone for the murder and collect my husband’s life insurance, but I didn’t tie up all the loose ends. I’m not sure if the game will hold my attention long enough to do so, but I’m still having fun with it and will continue playing until it stops being fun, even if I don’t get every possible ending. 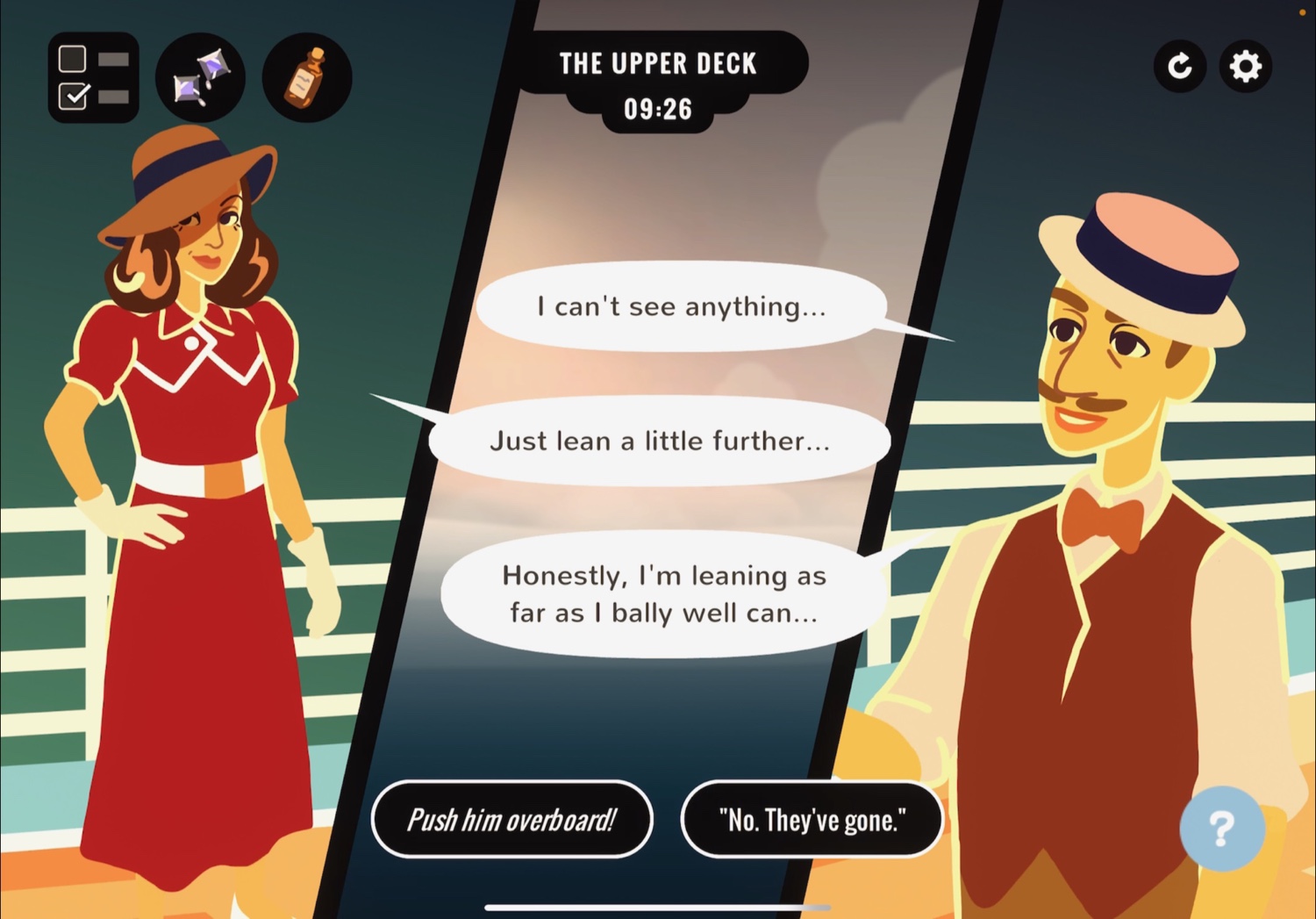 While I would still wholeheartedly recommend Overboard!, there are some things I should point out. First, despite there being achievements in the Steam version, the iOS version has none. It’s a shame, because achievements help you figure out when you’ve seen everything — or almost everything — that the game has to offer. Without them, you’re kind of guessing or keeping track yourself. There are still checklists in the game, but they’re for specific goals and and don’t cover everything that the achievements do, at least from what I can tell. Also, at one point I had Captain Anders’ pass-key but so did he. I didn’t get a sense that he had two, but maybe I missed a detail. Either way it just didn’t seem right that I could try to get his pass-key from him when I already got it from him and still had it. But it’s a small detail in an otherwise enjoyable game. Occasionally I’ll notice some other minor inconsistencies, but overall it does a pretty good job holding together all the different strands to create a coherent story.

Overboard! is the kind of game that both feels fresh and original but at the same time it’s surprising that no one came up with it sooner. Who doesn’t want to play as a woman pushing her pig of a husband off a cruise ship? And while it can get repetitive after multiple playthroughs, there are a number of quality-of-life features that help avoid tedium. You can fast-forward through dialogue you’ve seen already and the choices you made in your previous game are highlighted so you have an easier time tweaking things to change the outcome. The whole presentation is just spot-on and even with the few complaints I do have, it would be a shame to miss out on this gem. So grab Overboard! here and see if you have what it takes to get away with murder.

And if you need help solving the puzzle, try my walkthrough guide.

Reigns Walkthrough Guide: How to Identify the Terrorist Cell (The Hat Objective)