Haiku Games is back with a new Adventure Escape game, called The Sultan’s Inventor. You play as Royal Inventor Zara, who is accused of murdering Sultan Omar. You need to help her prove her innocence! This walkthrough guide should help you if you get stuck on any of the puzzles in Chapter 7. Feel free to ask for extra help in the comments section.

1. Zara is now at the Royal Bath House, trying to deliver evidence to Princess Amira. But wind blows away the documents! Grab the miniature boat, switch lever, empty bottle and net. One of the documents is in the plant on the right, another is near where you found the net, and the third one is up high on the left, out of reach. Notice the two other documents that aren’t ours.

2. Use the net to fish out another switch lever from the fountain.

3. Place the two switch levers in the slots on the back wall. Flip the right switch to turn on the ceiling fan and then grab the document that flies down. Flip the left switch to shut off the waterfall, revealing eight patterned tiles.

4. LetΓò¼├┤Γö£├ºΓö£├╗s use the 8 tiles together with the two documents we found to figure out how to arrange all the columns. The document with the four columns has each section numbered. So number the 8 tiles 1 to 8 and then change the patterns on the columns to match them. It should look like this:

5. Now the fountain raised up and we can control the waterways by spinning the fountain. Turn it four times and note down which holes have water coming through in each one. Use the other document to to see which number each waterway represents. Then add them up for each set to get the four numbers for the combination lock. So you get:

6. Enter 6753 into the combination lock to open the control panel.

7. Now to solve the Waterways Puzzle. You need to press the arrows to move the tiles and make a path that connects the START and END. You don’t need to use all the tiles. You can use my graphics or video if you need help. 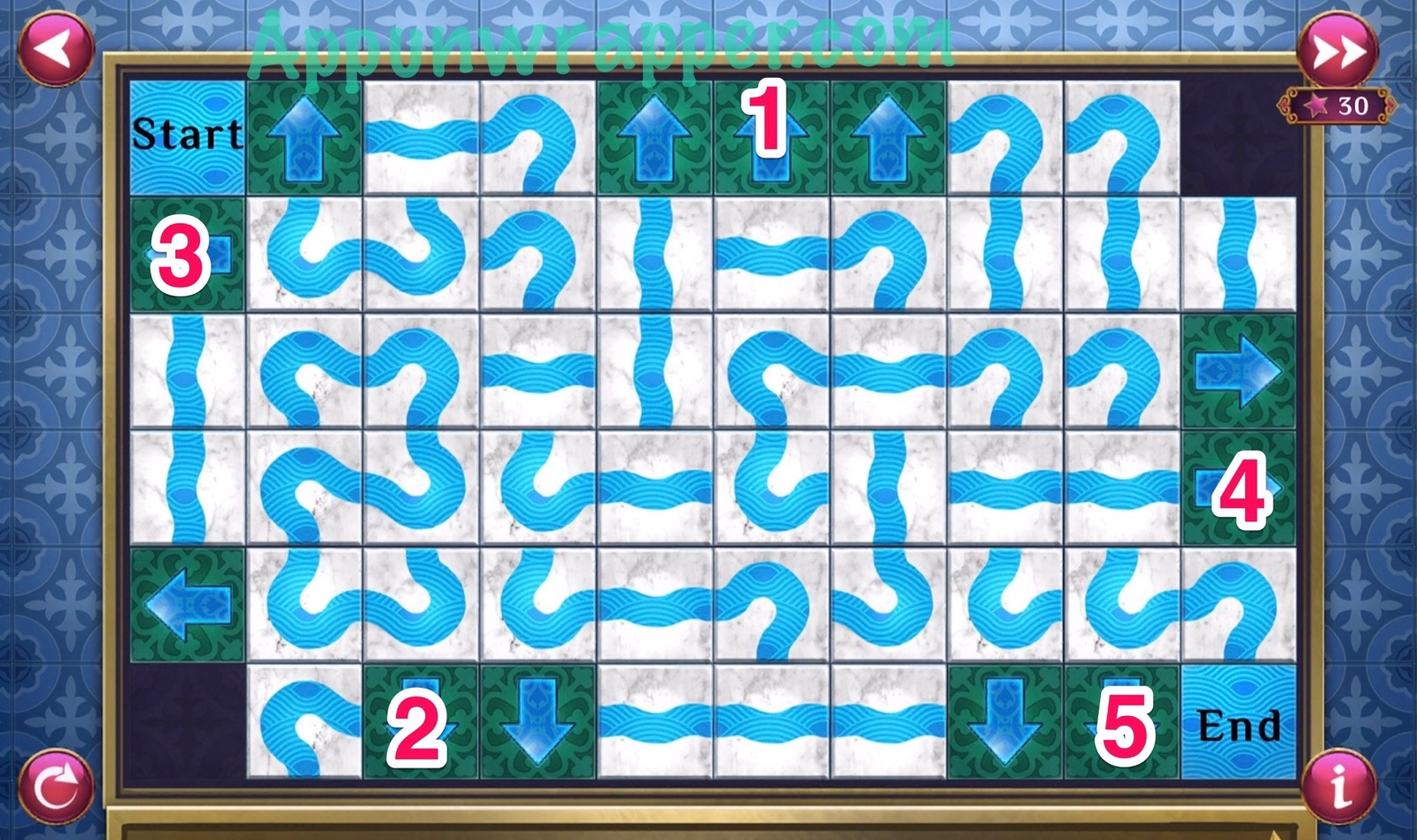 8. Now the waterway is active. Place the boat down, then the bottle, and then all three documents inside the bottle.

9. Now the boat with the documents goes to the Sapphire Room to Princess Amira. She reads them and learns Jamal is a traitor. They’re planning to execute him at sunset. But something isn’t right. Why aren’t they having a trial? Cyrus tells Zara that Amira was always the one sneaking around with Mustafa. Did she frame Jamal? Then he shows Zara the door to the secret room. We need to figure out how to open it.

11. Use the towel to wipe off the dirt over the tiles on the right. Also, place both switch levers on the wall and flip them. One will shut off the steam on the left and the other will raise a fountain on the right.

12. Add oil to the rusty wheel on the right. Notice different fountains turn on when you spin it.

13. Make note of the order in which the fountains turn on. The lion has one that spouts up and one that spills down. Then the two birds are left and right. Tap on the door and press the buttons in the same order as the fountains: 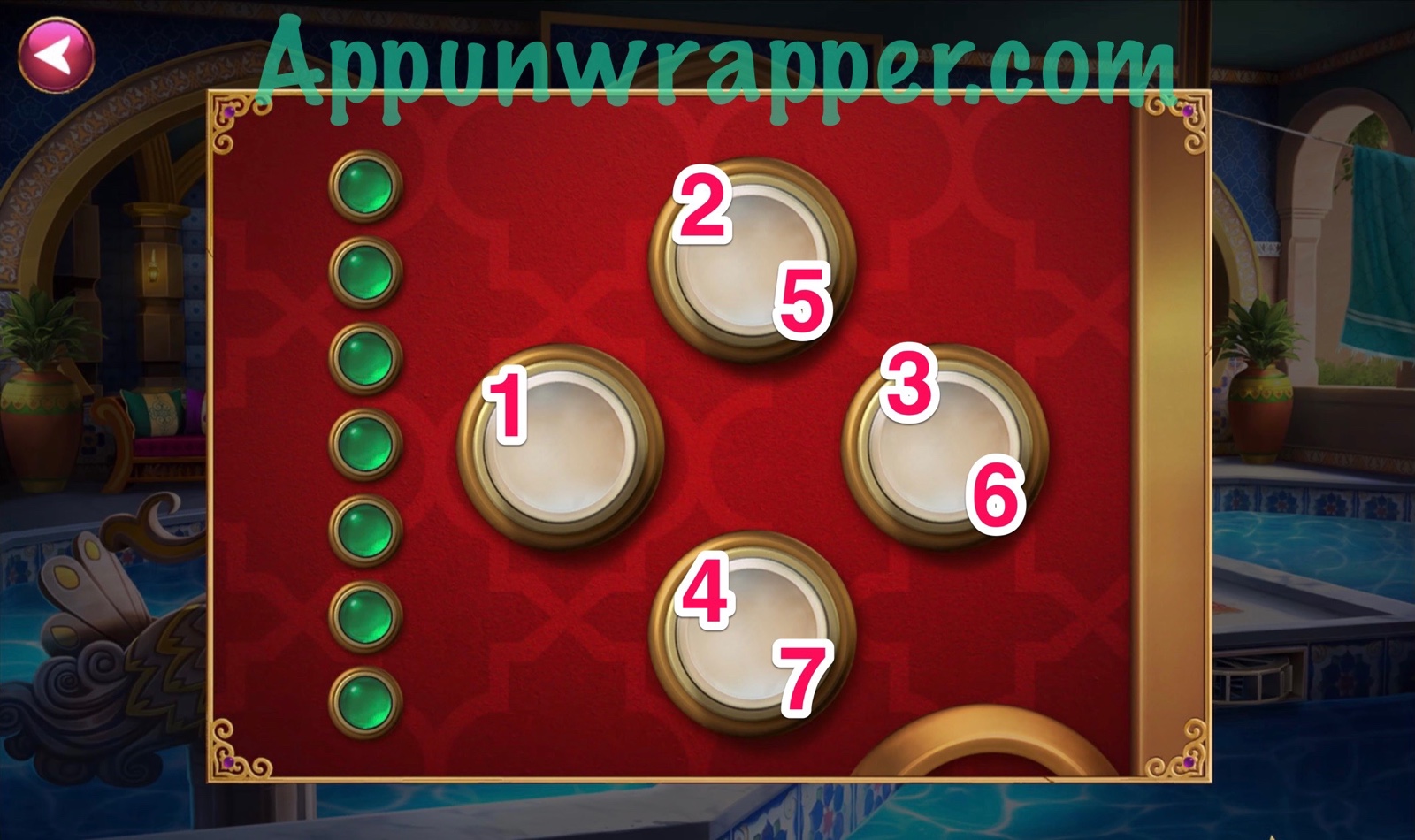 14. Take the wall tile from inside and notice more tiles on the wall. We now have both sides of the pattern we need for the Tile Wall Puzzle. Place all four wall tiles in the empty slots on the wall and let’s solve the puzzle! You need to press the white knobs to rotate the tiles until they match the pattern you saw on the wall. Then go through to the secret room. 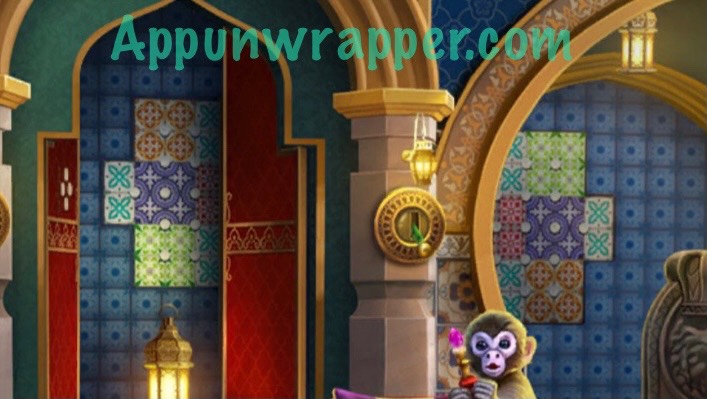 15. Pick up the silver key and fresh figs. Open the drawer to get a blue round knob. Move a pillow aside to get a gold key. Move the curtain on the left aside to reveal a painting of Amira. Notice the perfume bottles at the top. And last, push in the white tile on the right to reveal a lock with blue knobs. We’ll come back to that. 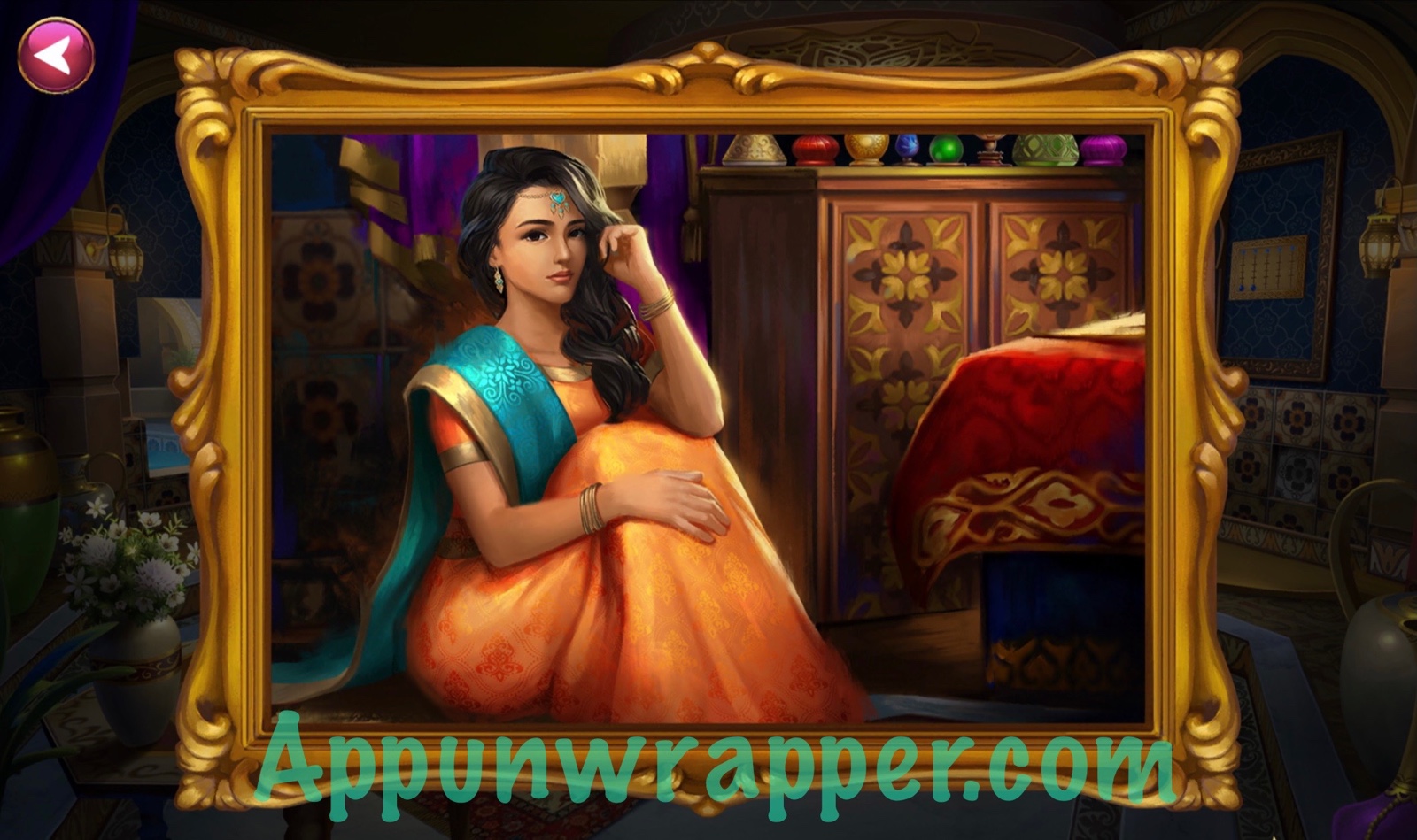 17. Put the pink gem in the slot on the small jewelry box. There’s a necklace with a missing pendant that looks like the one that was in Mustafa’s hand. Grand Vizier Jamal’s stamp is also here, so Princess Amira must have stolen it. There’s also another blue round knob. Grab it.

18. Go back to the other room and give the monkey fruit platter. Then take the perfume bottles he drops.

19. Give the fresh figs to the mouse in the hole in the wall to get another blue round knob.

20. Go back into the secret room. Place the perfume bottles with the others and organize them based on the painting of Amira. 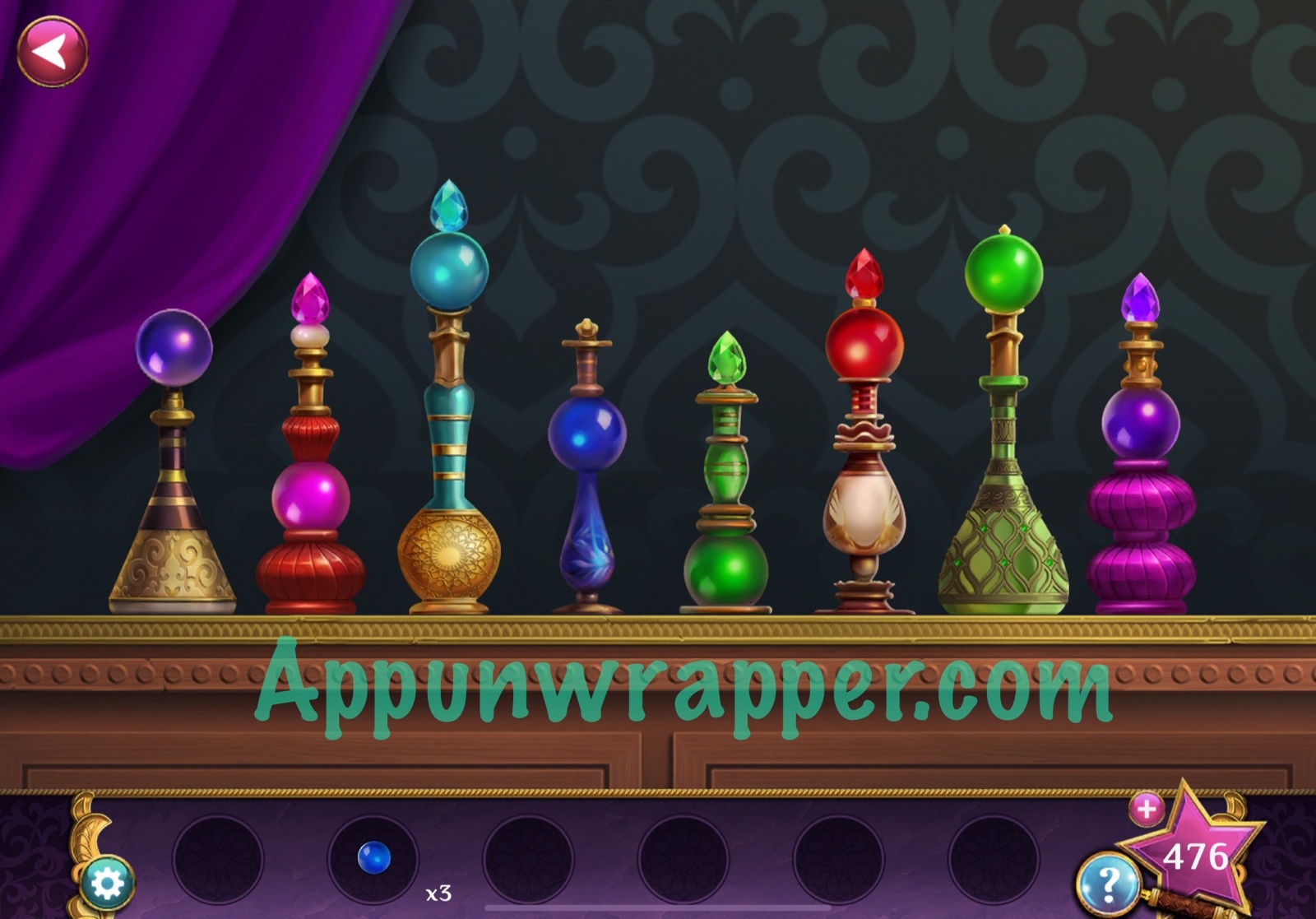 22. Read the documents and find the vial of poison. Now we have proof that Princess Amira is the murderer!

And that’s the end of Chapter 7! Click here to continue to Chapter 8 or choose a chapter below.