Haiku Games is back with a new Adventure Escape game, called Lost Ruins: Revenge on Atlantis . When Professor Burns gets possessed by an ancient desert artifact, he sets out to destroy the underwater city of Atlantis. You need to stop him before Atlantis is lost forever. This walkthrough guide should help you if you get stuck on any of the puzzles in Chapter 5. Feel free to ask for extra help in the comments section.

You can watch my video for Chapter 5 or continue to my step-by-step guide below.

1. We made it to the city of Atlantis! Zale and Aletha greet you and tell you that you need to complete some trials before they can greet you as guests. Once they leave, grab the key from the fruit bowl. Grab the pitcher of water and the glasses from the table. There’s also a glass cylinder behind one of the throw pillows. There’s a second glass cylinder in a panel on the left. Also, take the spinach from the bowl.

2. Place the glasses on the pedestals and then fill them with water from the pitcher. Some stars will appear on the floor.

3. Use the key to unlock the airlock and then place the spinach inside the airlock. Some fish will come to eat it and you can now view a stone tablet with some symbols carved into it.

4. Look at the bubble to the left. There are four holes around it. You need to fill them with water in the right order, based on the location of the stars on the floor. Basically, just flip it upside-down so the red star matches with the red hole. Once you finish, the bubble will rise up, revealing more symbols.

5. There’s a keypad near the door with the same symbols on it as in the bubble. Count each of the types of symbols on the bubble. There are 9 of the first, 1 of the second, 7 of the third, and 13 of the fourth. We need to use the clues on the stone slab to figure out how to write those numbers out using the triangle and dash buttons. It’s actually binary. So the way it works is that you have four slots. From left to right, they go 8 4 2 1. So to make 8, you would have a triangle in the first slot and then nothing in the others. So let’s make 9 1 7 13 for the keypad to unlock the door. It should look like the image below.

6. Now investigate the opening behind the keypad. It’s some hydraulics mechanism and there are two cylinders missing. Replace them with the the two you found. Now we have to solve the Displacement puzzle. Move the water between the connected cylinders to get exactly 2 units of water in each cylinder. You can use my video below if you need help. Then go through the open door.

7. Now we have to complete the second trial. Pick up the two broken busts and the left-facing bust. Also, grab the bracelet from the Amphitrite statue and the lantern from the wall. Notice the two placards. The left says, “Through exertion, we learn the value of rest.” And the right says, “Sometimes you have to look at things from a different angle.” Then go through the doorway to the right.

8. There’s a sword here but we can’t get it yet. Move aside the right corner of the curtain to get a right-facing bust. Also, there’s three more placards here. The placard in the middle says, “Nothing gleams without a light.” Place the lantern on the pedestal above it and then take the gold key. The left one says, “Though we may be the same, we will never see eye to eye.” Place the two busts here but have them face away from each other. Then take the upward facing bust from the panel. And the last placard says, “Just because you’re broken, doesn’t mean you can’t be whole again.” We’ll come back to that.

9. Climb up the stairs and give Aletha her bracelet and she’ll drop the curtain, revealing two more statues. Notice the four words at the top and the rings around each pillar below them.

10. Go back to the first room and use the gold key to open the compartment under the pink table. Take the sleeping bust from inside. Also, place the upward facing bust above the right placard to get a snake.

11. Place the sleeping bust above the placard to the left of Amphirite and then take the bioluminescent orb. Also, use the clue from the other room to solve the puzzle on the pink table. The words each had rings under them, as so:

Move the rings so each word lines up with the correct Roman numeral. The size of each pillar tells you how big each ring should be. It should match the image below.

12. Water fills the grooves in the wall. Notice the directions it’s flowing. Also, place the broken statue in the pool to fix it. Notice the compass above it, too.

13. Go back to the second room and place the orb inside the lantern. Then take the sword. Place the restored bust above the placard to the right and take the shield. Give the shield to Athena. Also, place the snake with the Asclepius statue and then focus on the green puzzle on the wall.

14. Now, let’s solve the green puzzle on the wall. You need to move the gem in the middle in the same directions that the water was flowing in the other room. But the compass above the water has North to the right. So you need to orient yourself accordingly. So it should go North, West, South, East, North, East. Then take the gemstone topper.

15. Go back to the first room and place the sword in Themis’ hand and the gemstone topper on Amphirite’s staff. Then head through the newly opened door for the final trial.

16. Now we have to solve the final trial. Rotate the green arrows so that they’ll lead Xochi around to step on every tile. Then tap on her when you’re ready for her to walk the path. 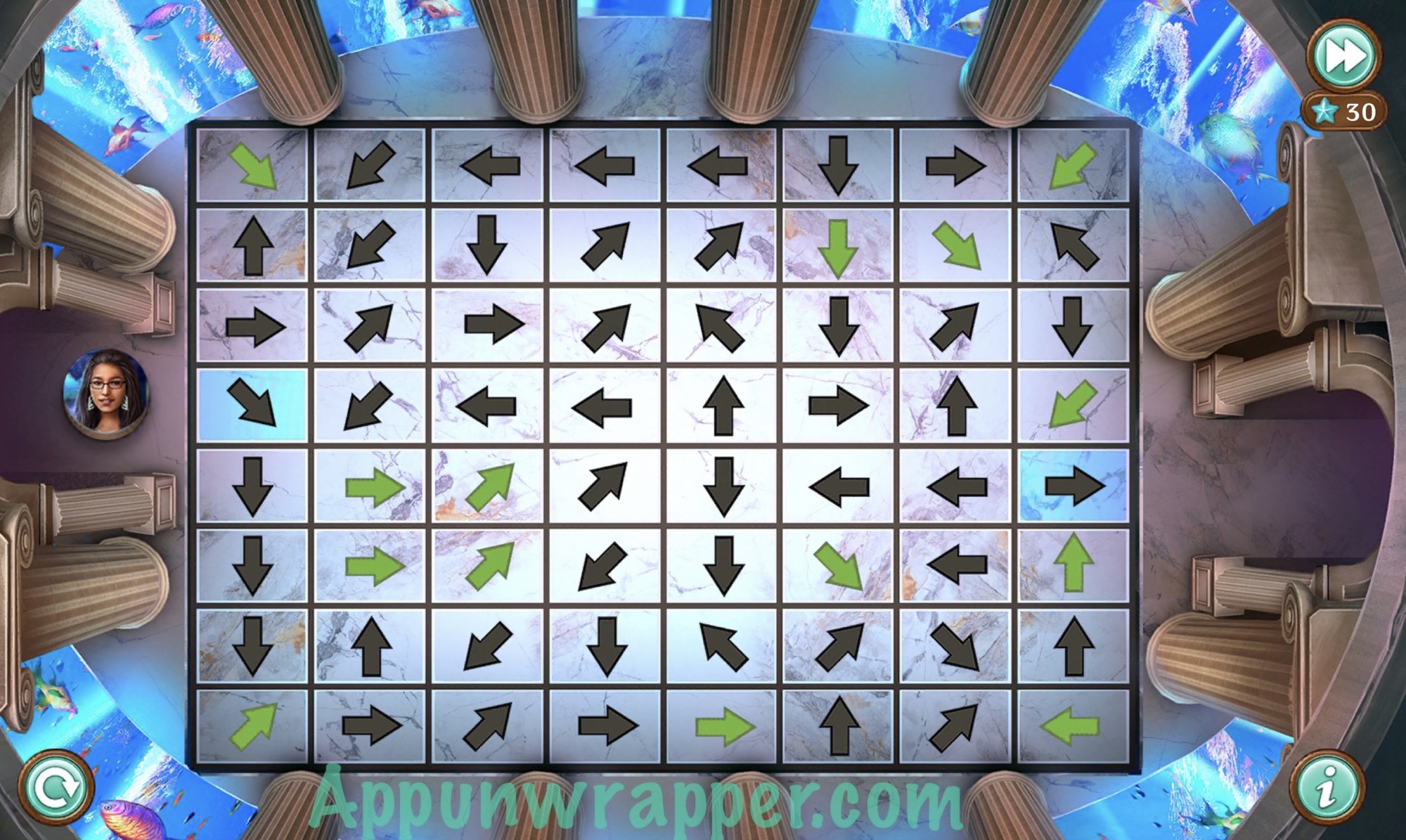 And that’s the end of Chapter 5! Click here to continue to Chapter 6 or choose a chapter below.

Shift Your Perspective in Γò¼├┤Γö£├ºΓö£ΓöÉPanmorphia: Awakened,Γò¼├┤Γö£├ºΓö£├╗ Releasing April 28 (Preview Inside)