Haiku Games is back with a new Adventure Escape game, called Lost Ruins: Revenge on Atlantis . When Professor Burns gets possessed by an ancient desert artifact, he sets out to destroy the underwater city of Atlantis. You need to stop him before Atlantis is lost forever. This walkthrough guide should help you if you get stuck on any of the puzzles in Chapter 8. Feel free to ask for extra help in the comments section.

You can watch my video for Chapter 8 or continue below for my step-by-step guide.

1. The trident gets carried off by the water. Pick up the rake and carrot. Tap on the statue of Demeter to learn that she’s the goddess of the harvest. Notice the gold Greek letters on the wall to the left and the green Greek letters to the right. Also, look at the pedestal with a puzzle on it. We’ll come back to it.

2. Use the rake to knock down the triangle from the tree. Then head down the steps on the right.

3. Pick up the loose tile. It’s a square! Use the carrot with the bunny to get it to come out of hiding and then take the circle. Also, use the rake to clear out some of the petals and reveal four blue Greek letters. Tap on each of the statues to learn about them. Aphrodite is the goddess of love. Apollo is the god of the sun, music, healing, prophecy, and intellectual pursuits. Dionysus is the god of wine.

4. Place the square, triangle and circle in the slots on the pedestal to light a fire and allow access to the statue of Artemis. We can’t solve the puzzle yet, though.

5. Go back to the first scene and look at the puzzle on the pedestal again. There are four words around the border, but you need to tilt your device a certain way to see each. The arrows tell you which word to focus on. The first one is pointing left and if if you tilt your screen back, you can see it says Aphrodite. She was holding an apple, so change the first symbol to an apple. The next arrow is pointing up at the word Apollo, who was holding a lyre. So that’s what the second symbol should be. The third arrow is pointing right at the word Demeter, who’s holding flowers. So that’s what the third symbol should be. And the fourth arrow is pointing at Dionysus, who’s holding grapes, so that’s the fourth symbol. Then you’ll get a key. 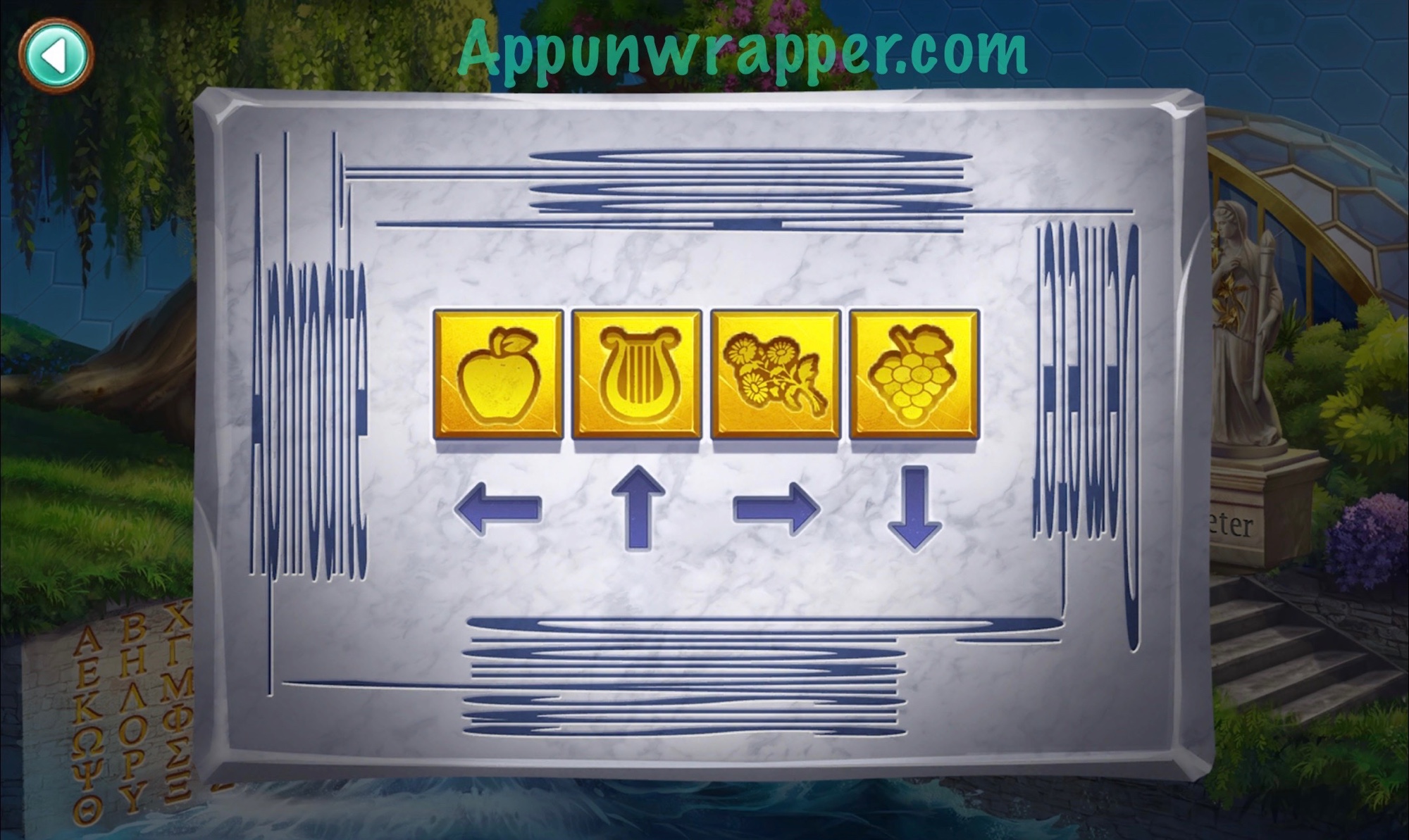 6. Use the key to unlock the garden shed. Take the clippers and rope from inside.

7. Tie the rope to the right tree. We have to find a way to connect it to the other.

8. Head right again. Use the clippers to trim all the bushes so you can see all the colored Greek letters.

9. Now, look at the grid of Greek letters and draw a line from each of the colored letters to the next. Then see what it looks like. Dark blue is a Z. Green is a P. Turquoise is a Gamma (╬ô├▓┬╝Γö£Γöñ). And light blue is Sigma(╬ô├▓┬╝Γö£Γòæ). 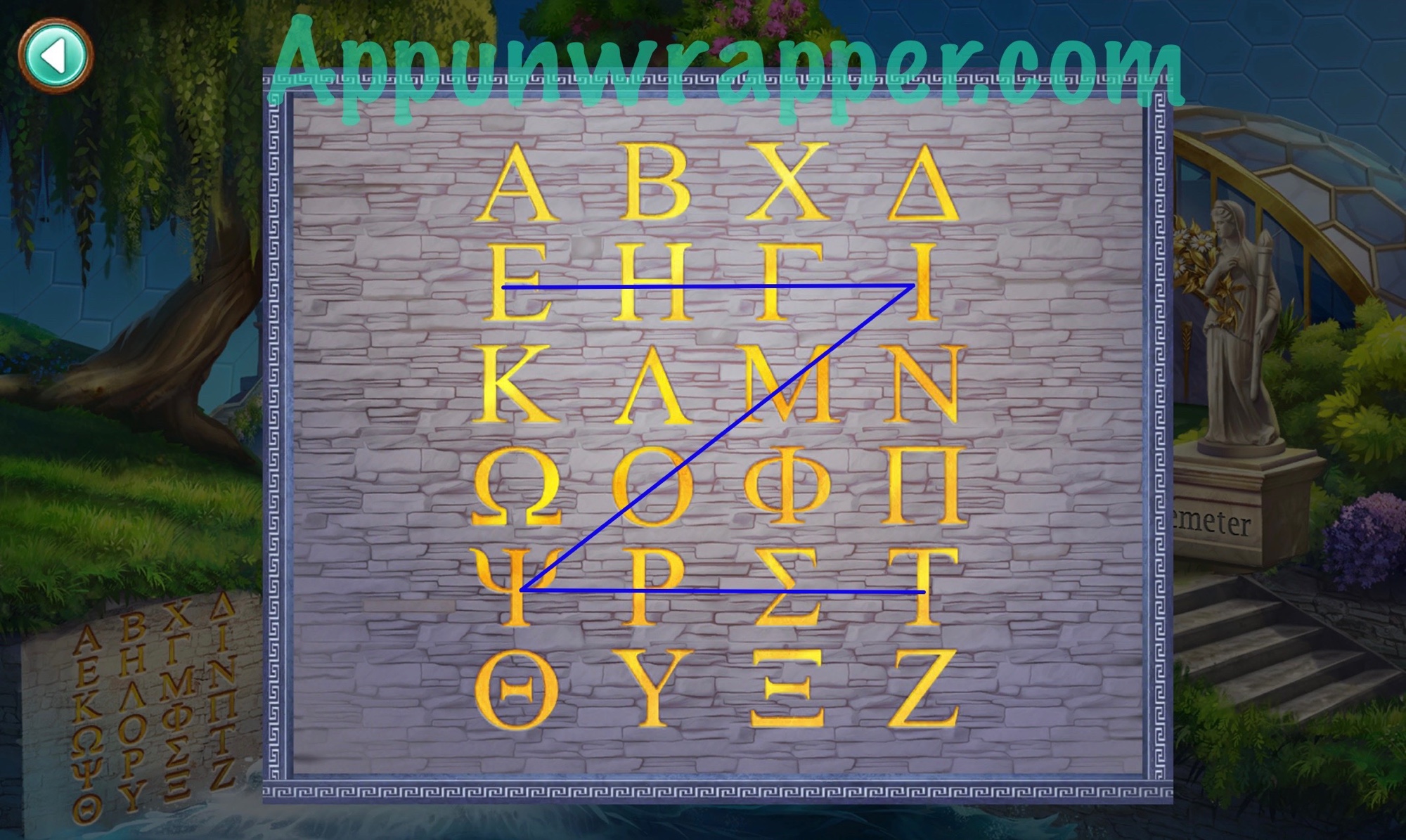 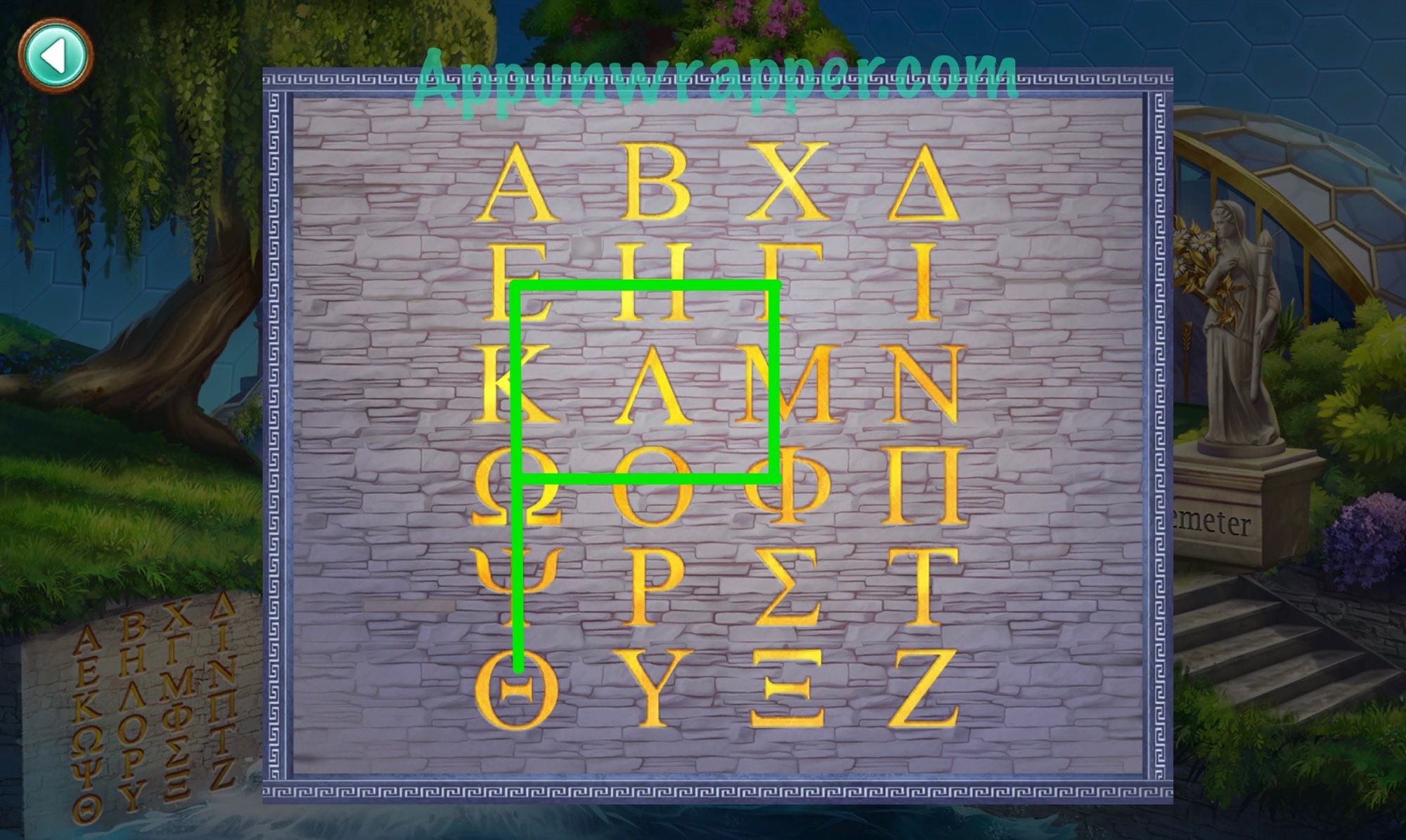 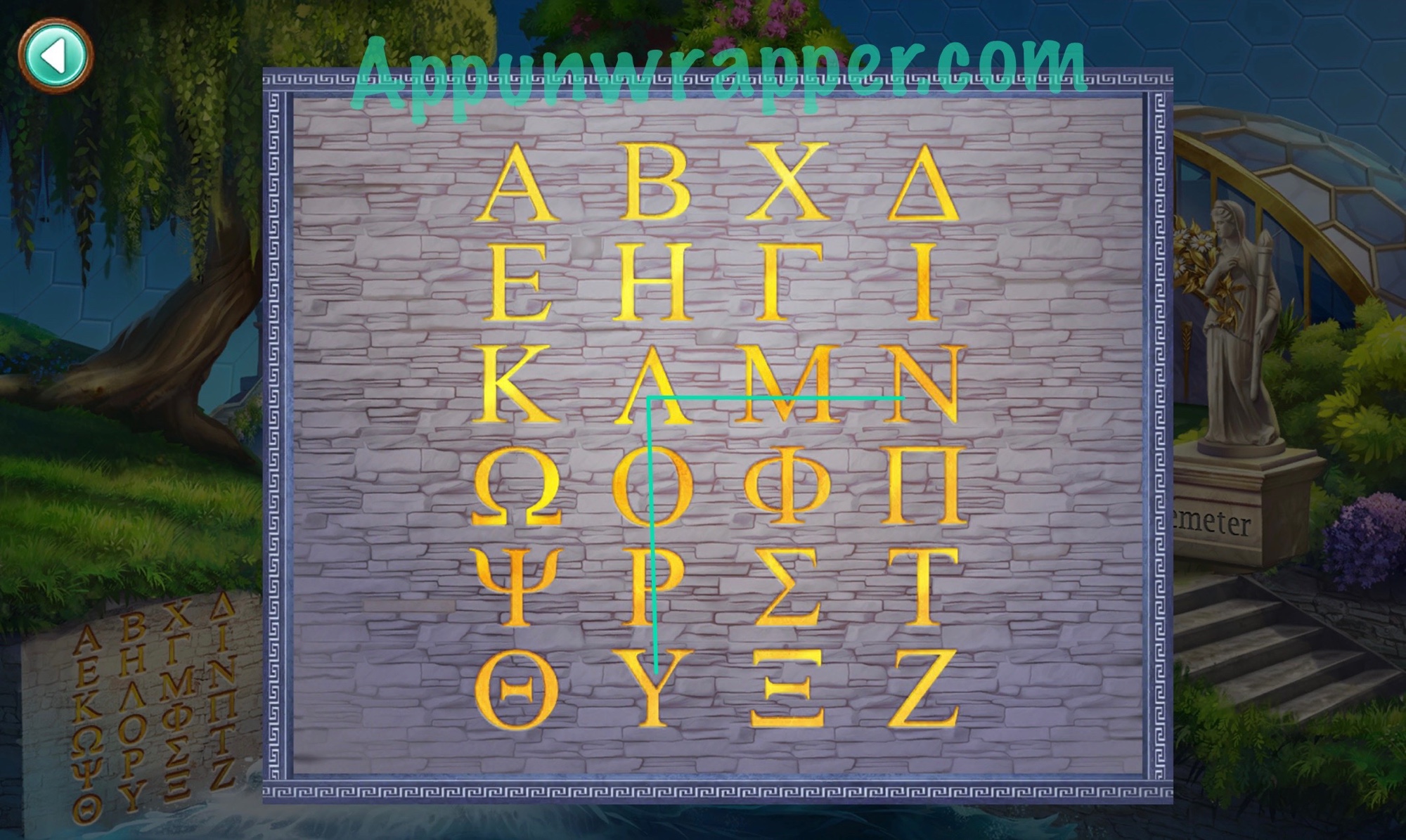 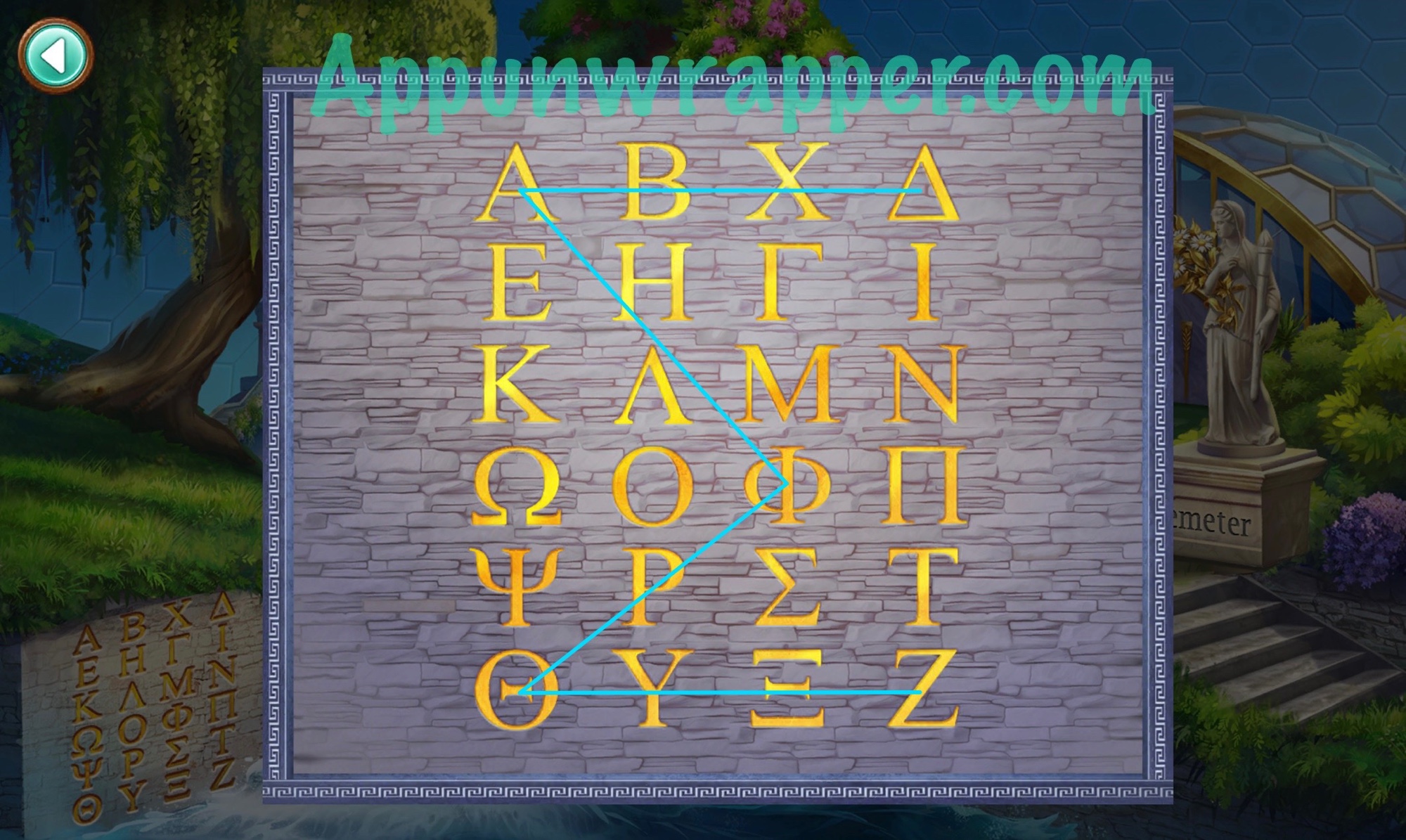 10. Enter ZP╬ô├▓┬╝Γö£Γöñ╬ô├▓┬╝Γö£Γòæ into the combination lock under Artemis’ statue to get the bow and arrows.

11. Go back to the first scene and use the bow and arrow with the rope to shoot it and attach it to the other tree. Then cross.

12. Now we have to solve the Currents Puzzle. We need to create a current that leads to the tree where the trident piece is stuck. Topple the statues to manipulate the current. The current will stop if there is nowhere for it to go or there are two viable paths. It will whirlpool if it overlaps with itself. You can copy my solution below if you need help. 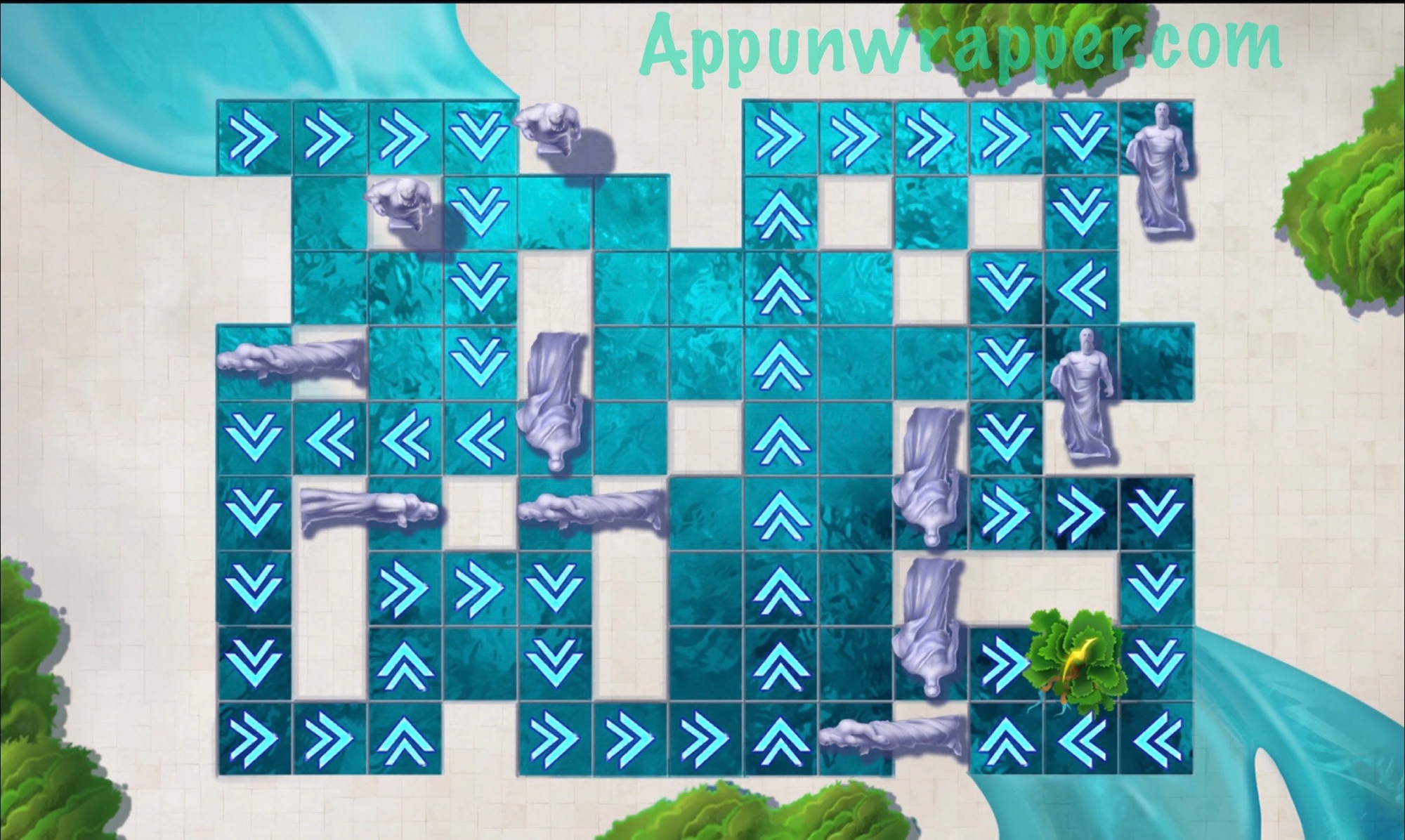 13. Now we head over to the Atlantean temple to try and assemble the trident and stop Professor Burns. Pick up the two rings and the vase. There’s another ring behind some weak wall you can break. There’s another ring inside the drawer under the statue. Also, notice the four colored symbols and the matching puzzle up ahead.

14. Fill the vase with water from the pool. Add the four rings to the gold panel to pull it off. There’s a grid of symbols underneath.

15. Place the vase of water in front of the four symbols. Then solve the puzzle by matching the symbols to those.

16. A fountain appears but we have to get it working. Use the grid of symbols to figure out what to change each symbol above the fountain to. You need to find the same sequences in the grid. I’ve highlighted them each for you. Then the water will turn on. Use the trident parts in the fountain to combine them into the whole trident. 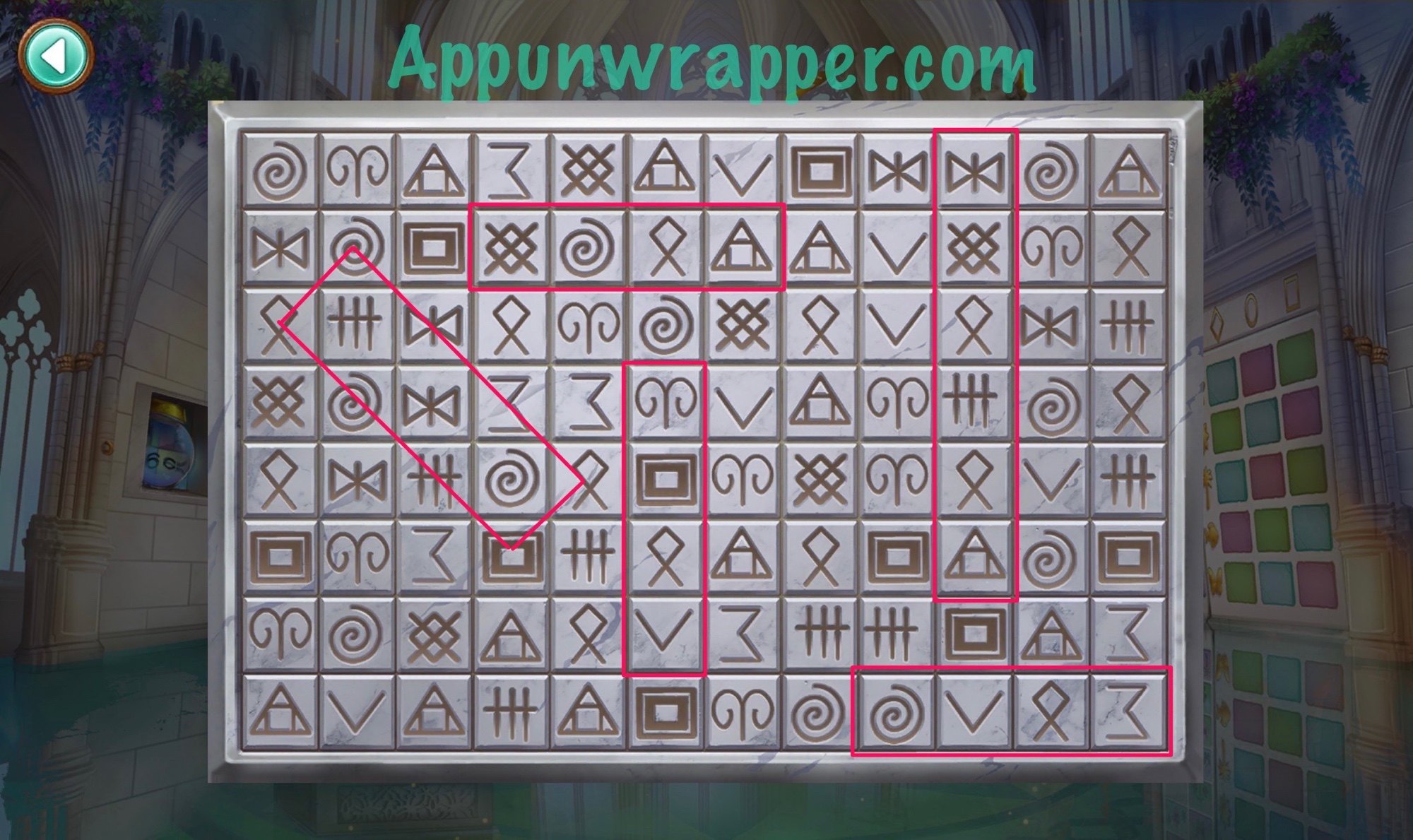 17. Use the trident to get the two tiles that are high up.

18. Tap on the puzzle to the right and place the two tiles down. Now let’s solve it. Each tile must meet the criteria set by its column, row and color. Then go through the door. 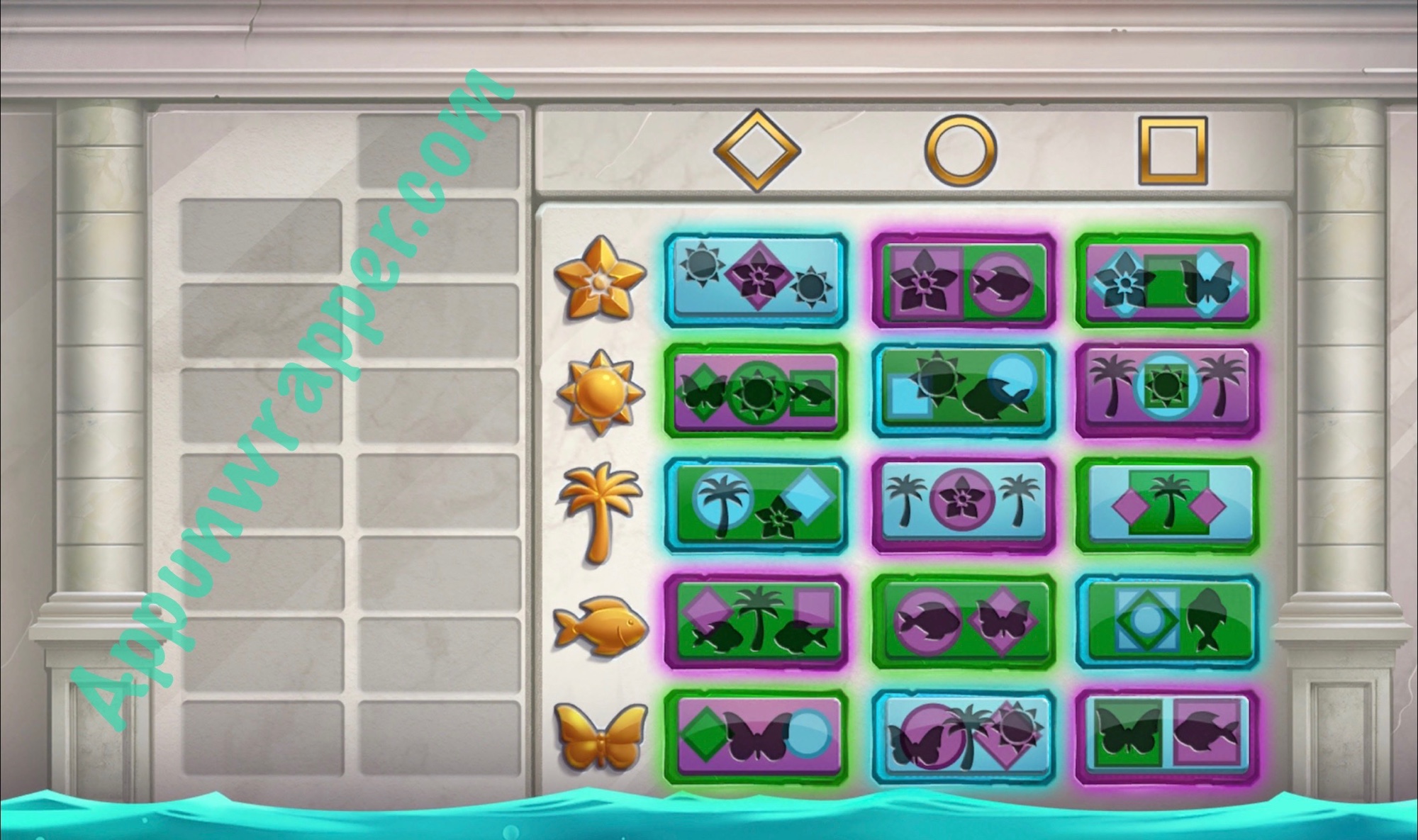 19. Xochi goes through first and the door shuts behind her! She’s locked in there alone with Professor Burns! Now we have to play the Saving Burns mini game. When he throws a symbol at you, you must counterattack by selecting the fountain that holds a different view of the same symbol. It’s different each time, so I’m not sure how much my video will help you. I’ll try to get photos of each symbol here. If there’s any I missed, feel free to email me a photo and I’ll add it. Once you’re done, you can watch the ending. 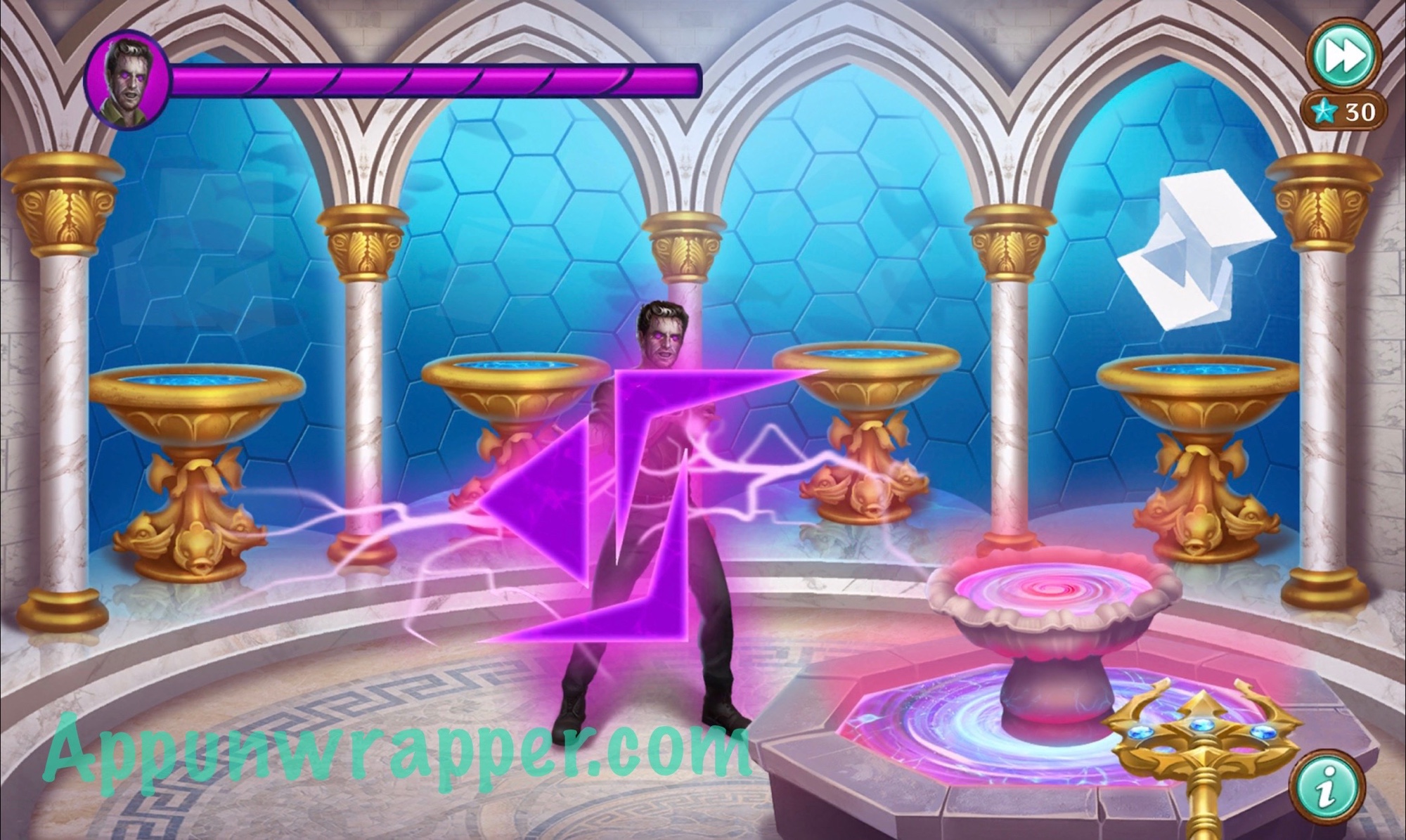 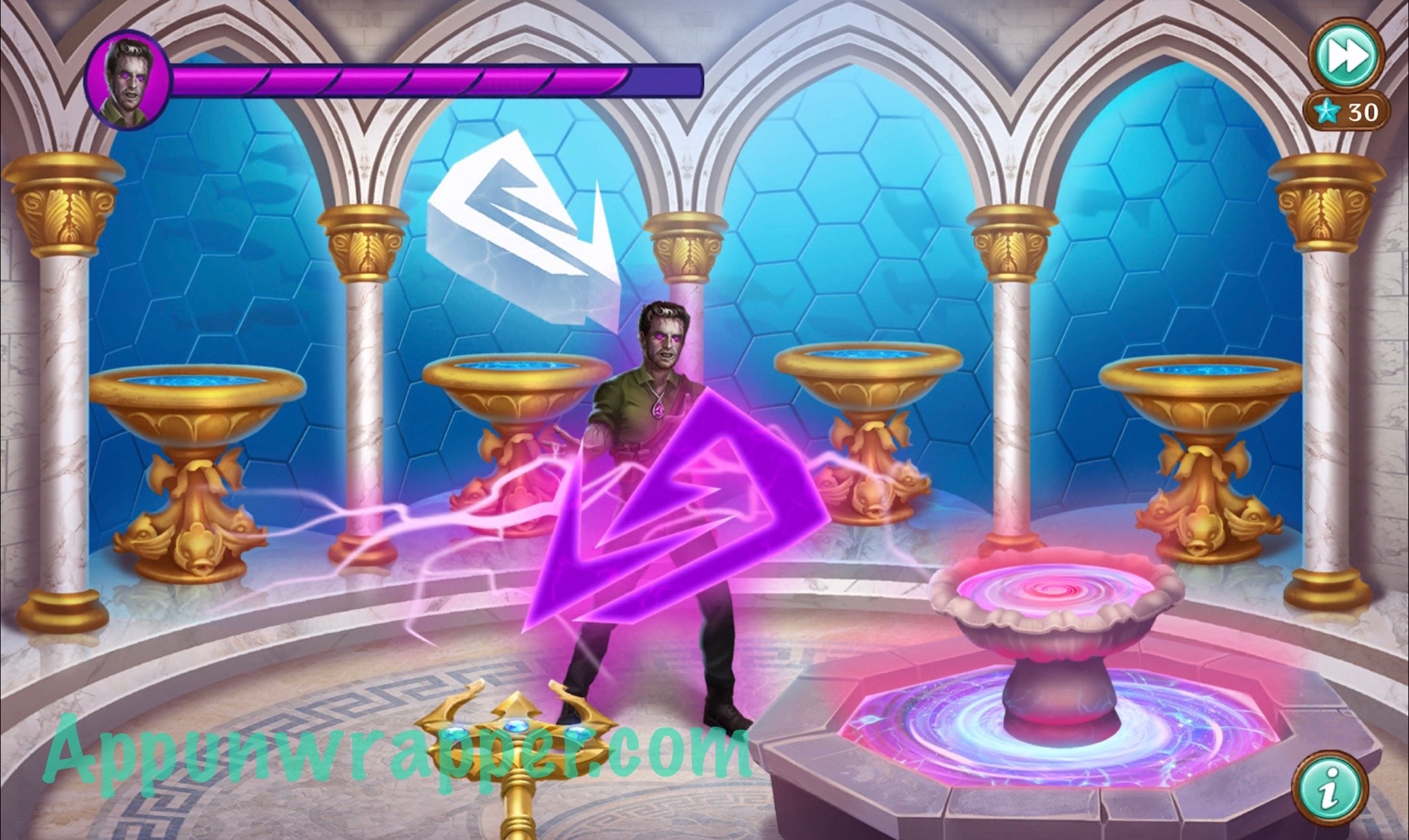 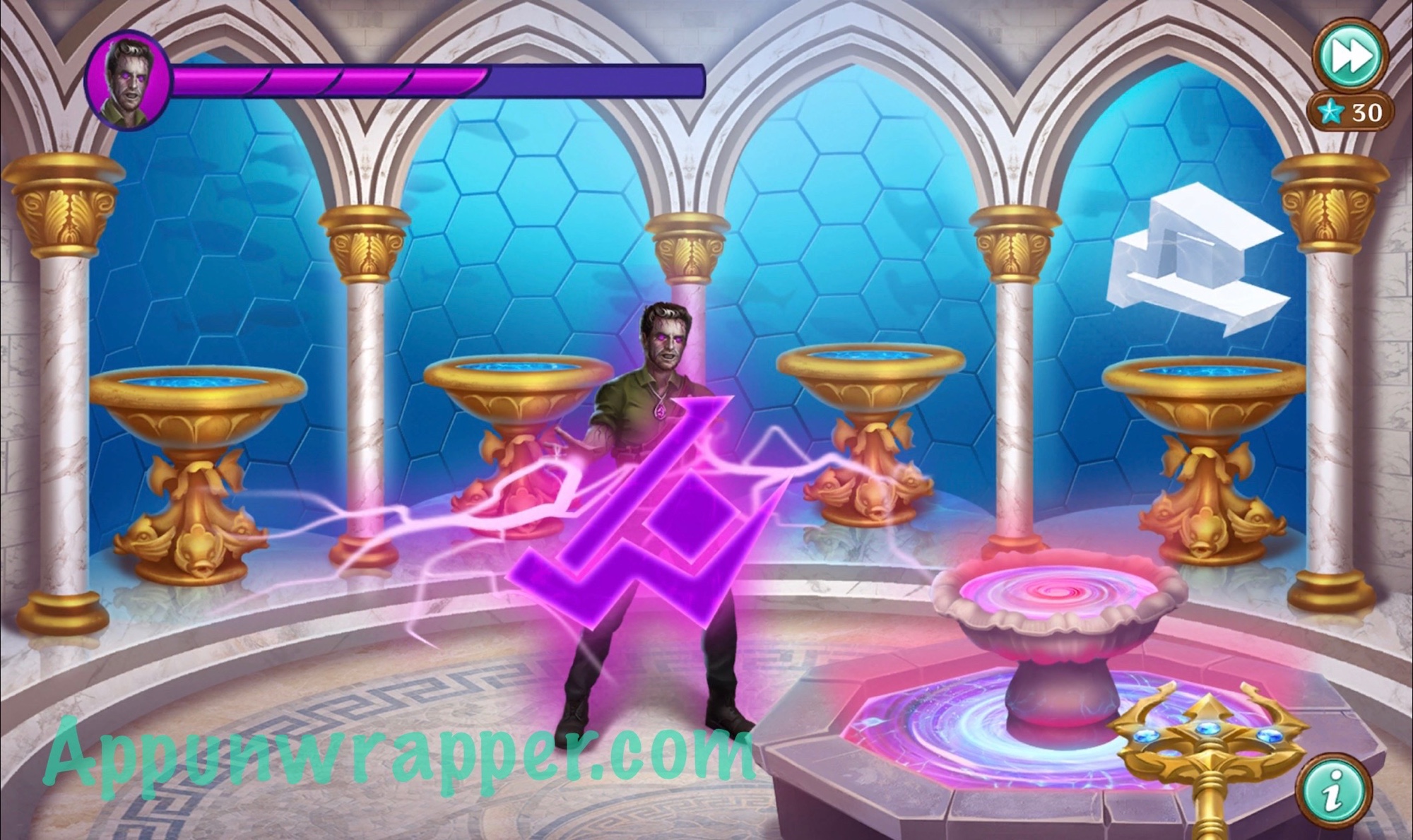 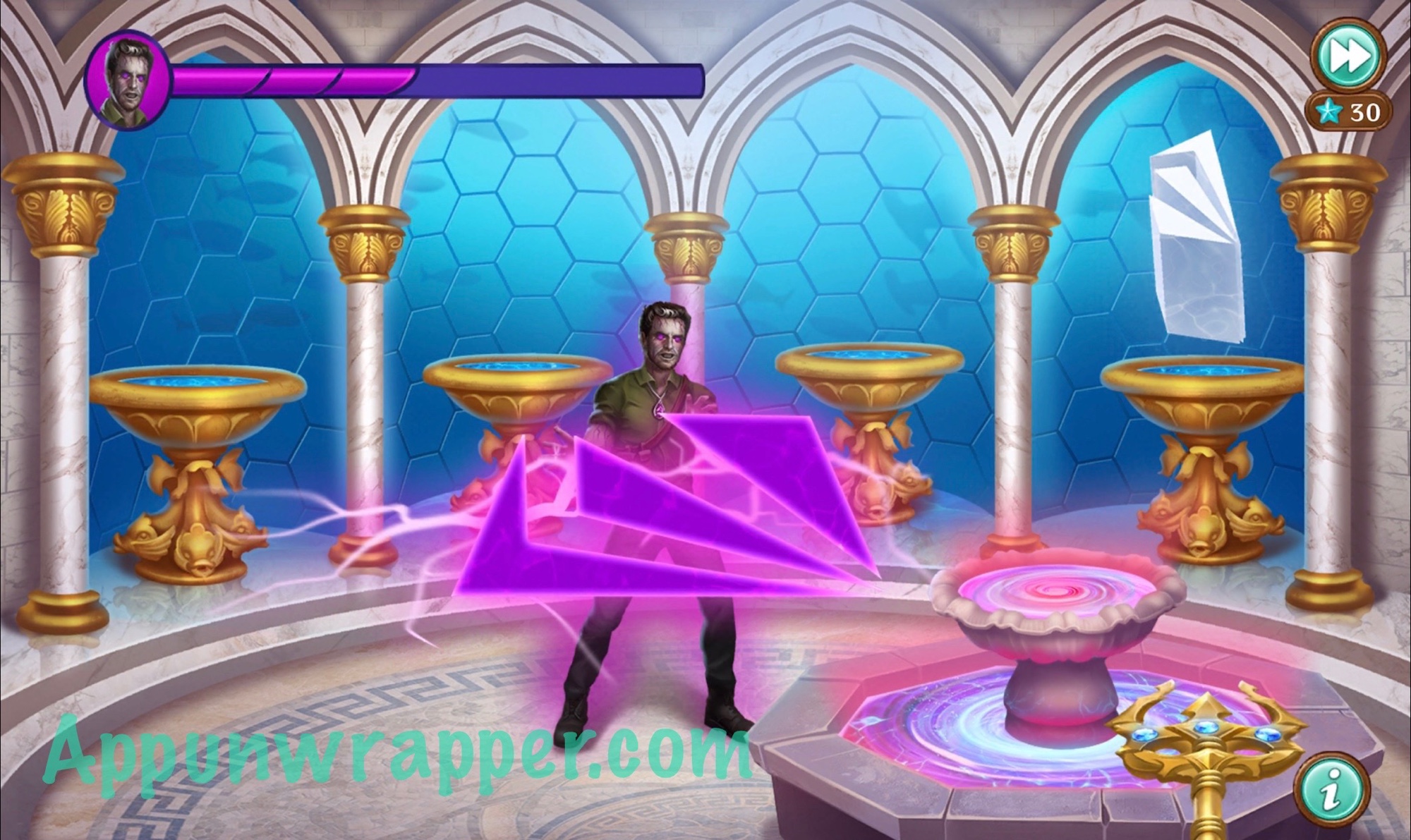 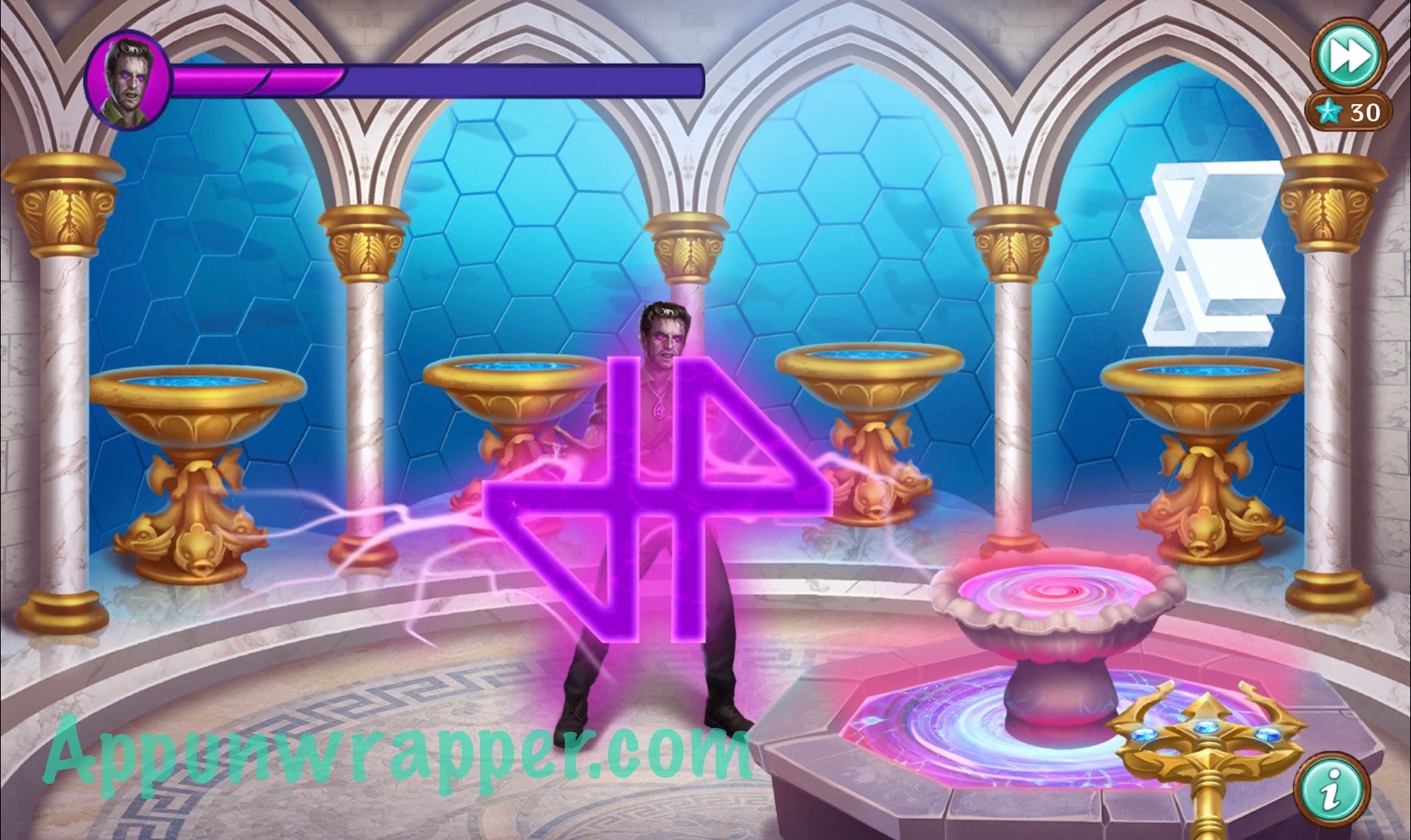 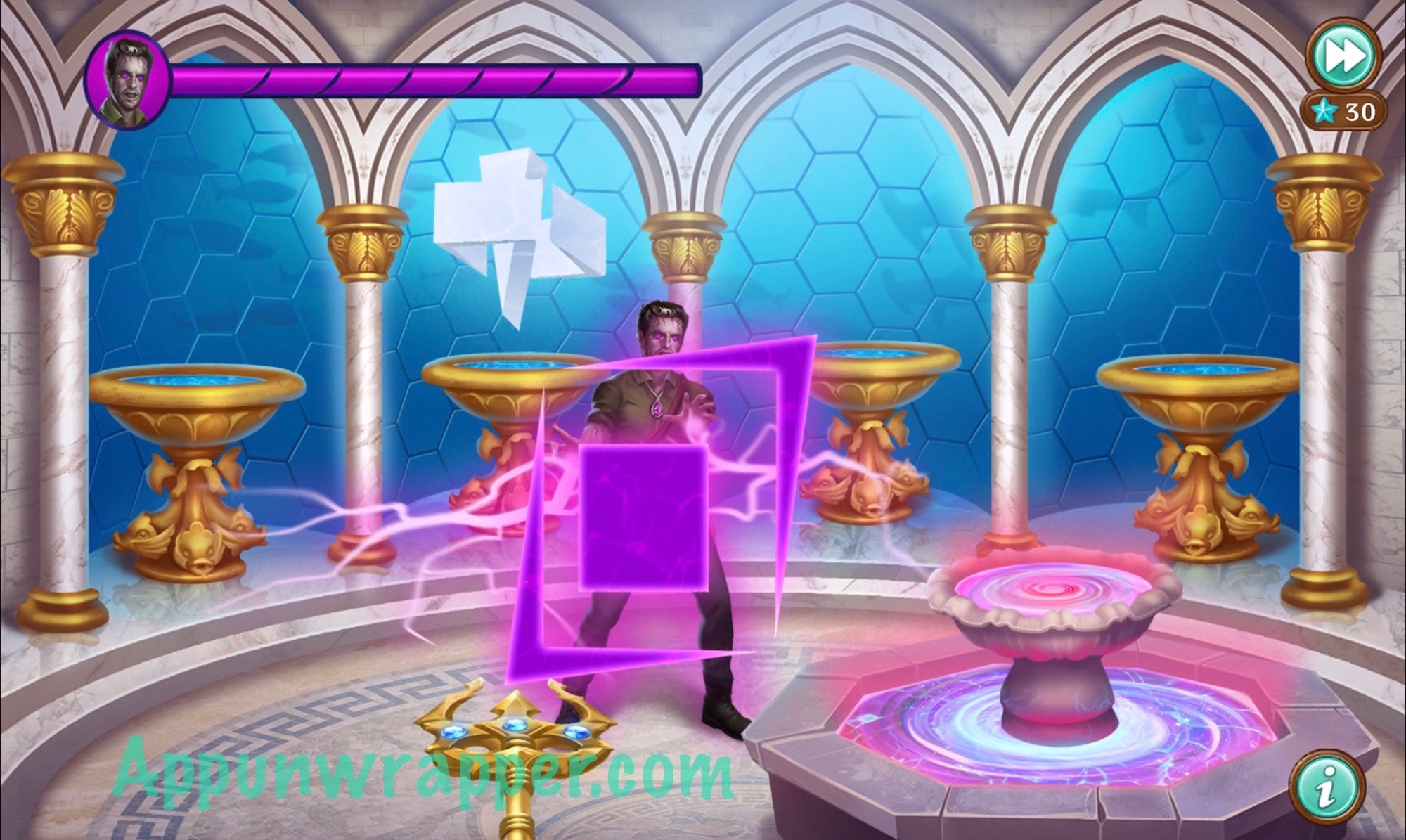 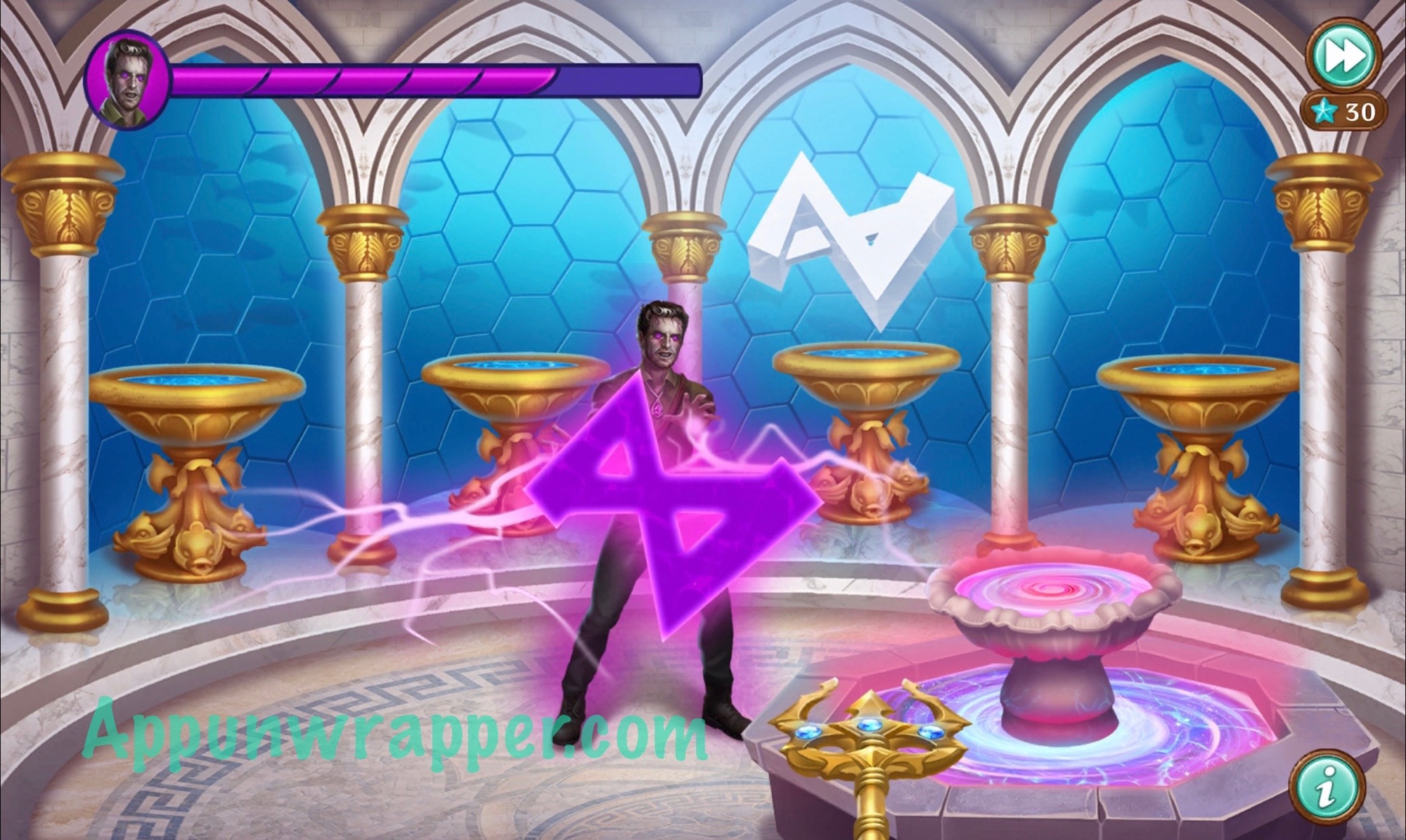 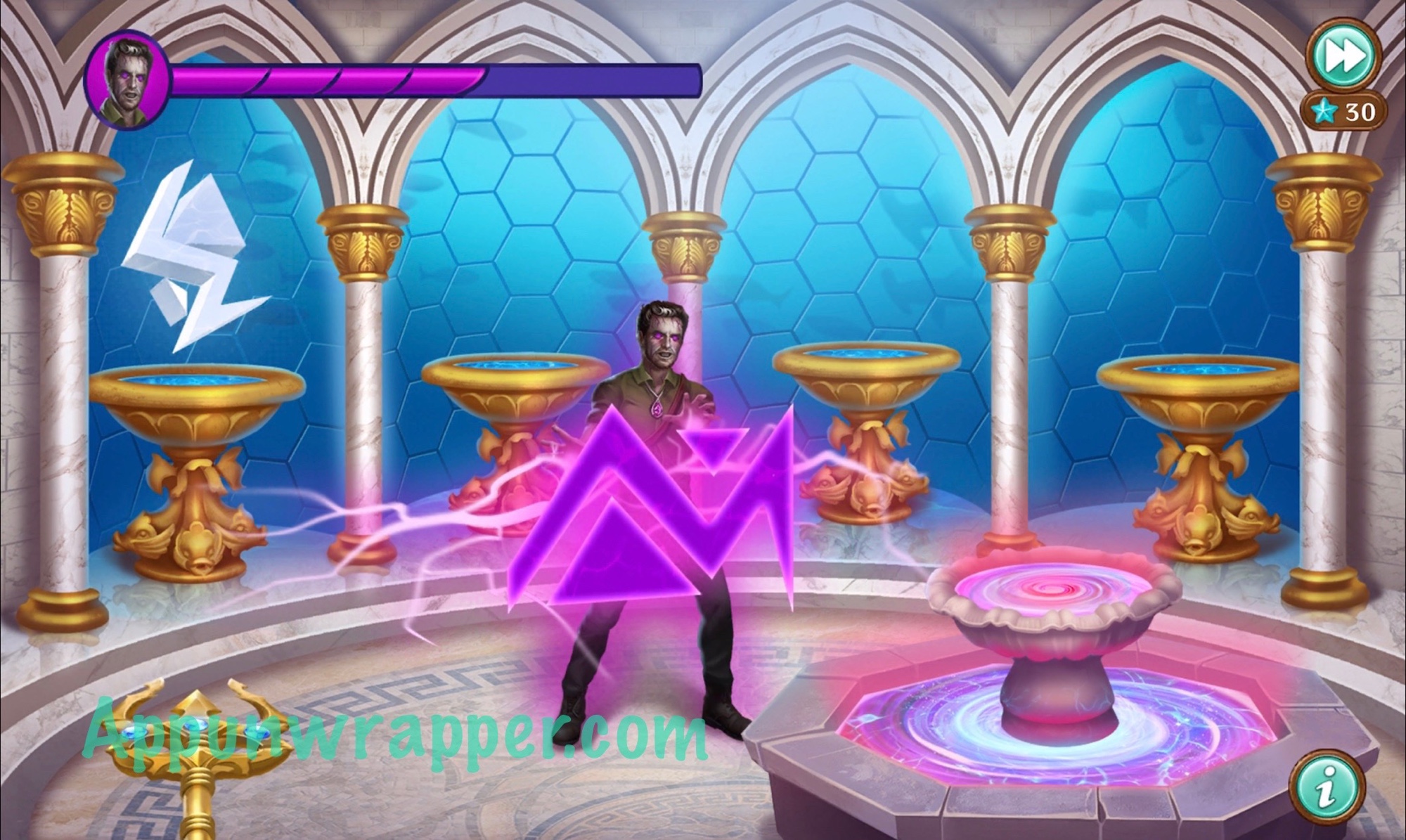 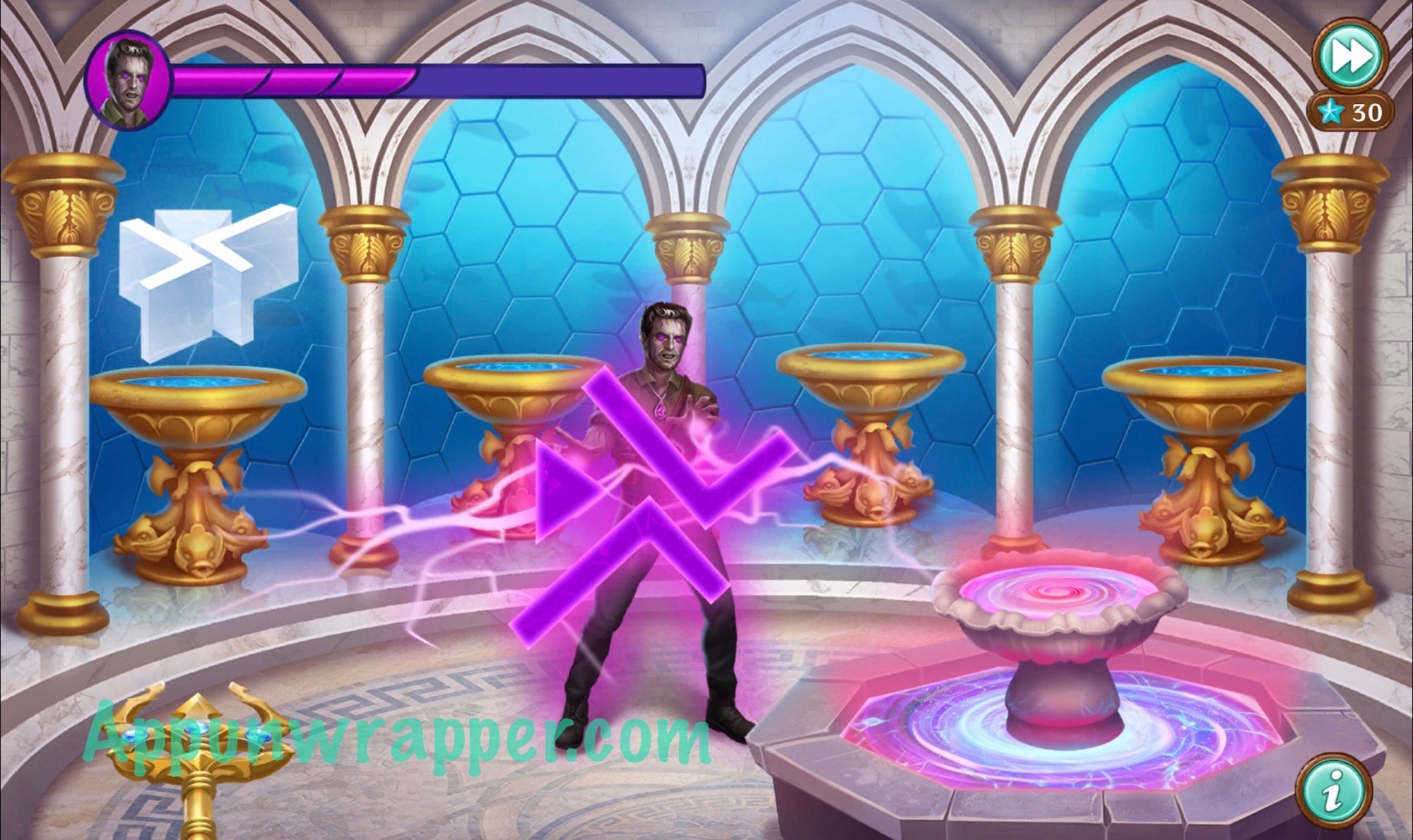 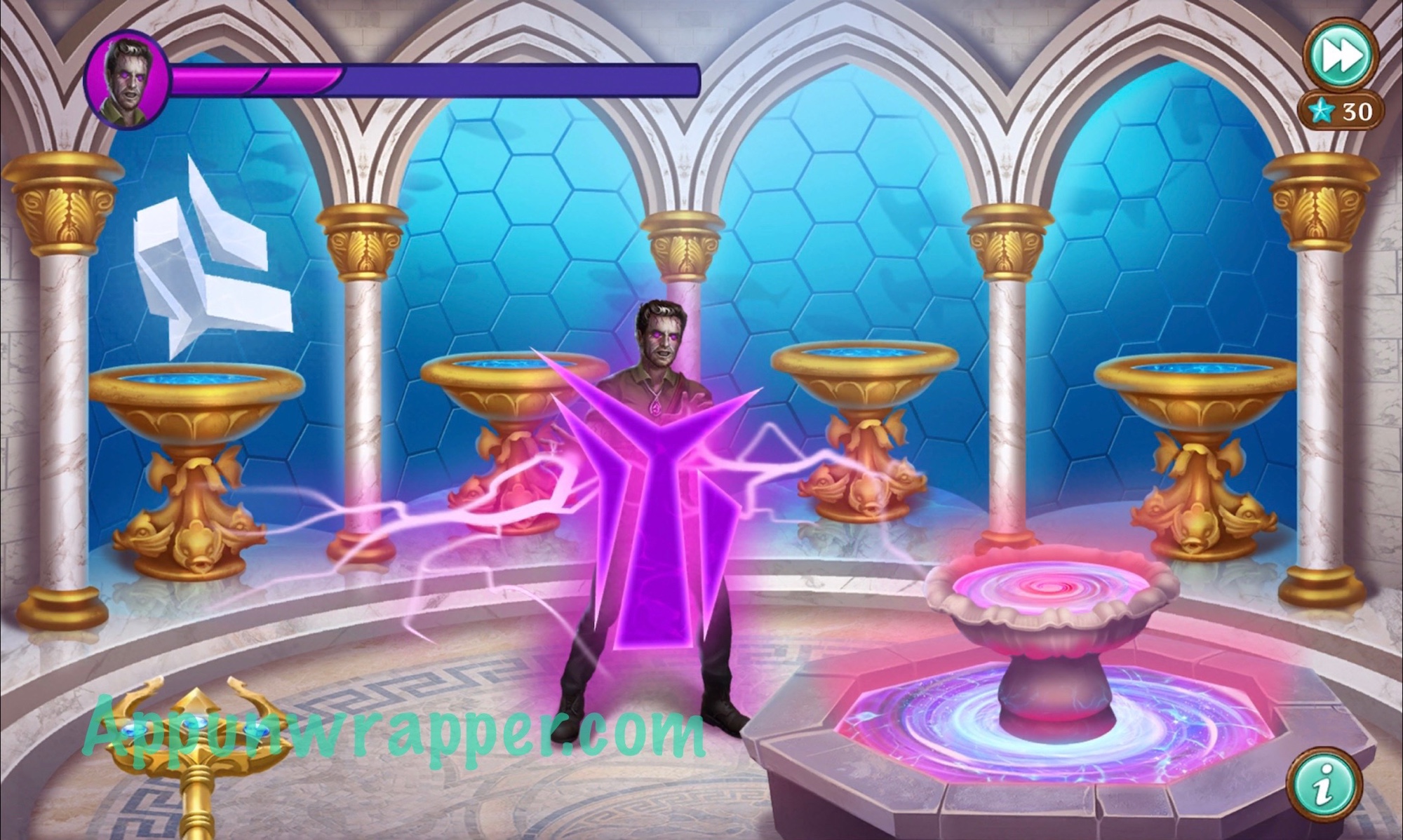 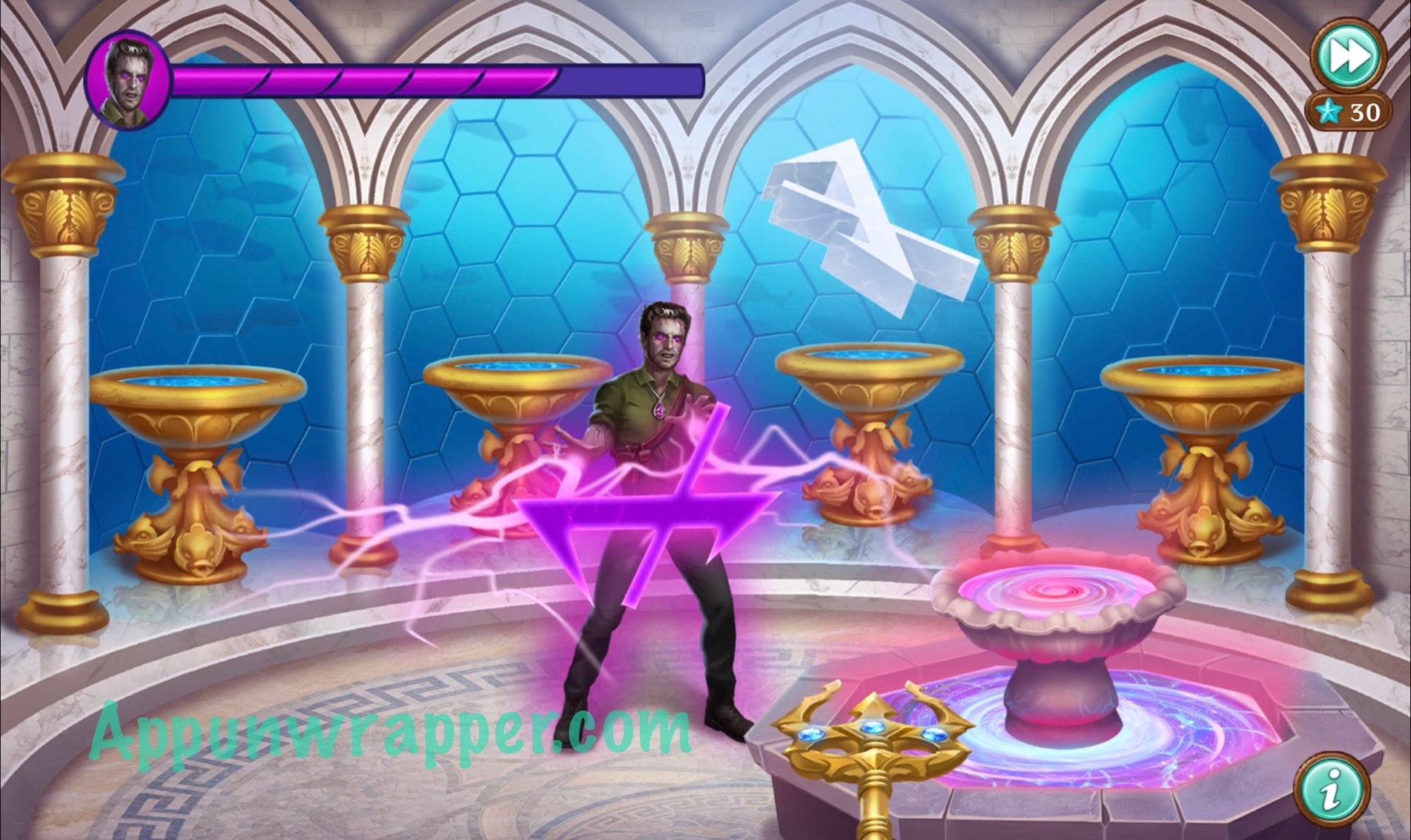 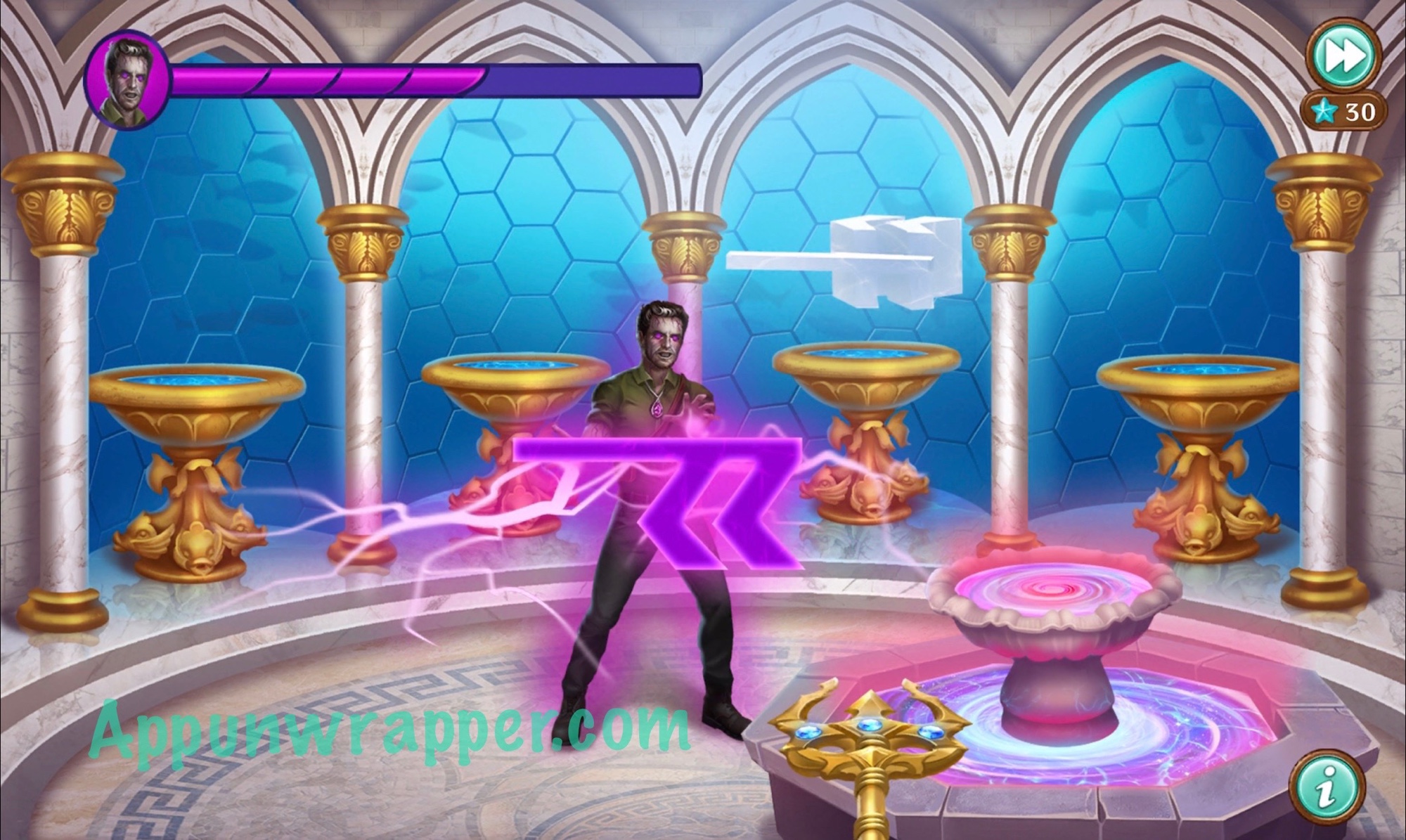 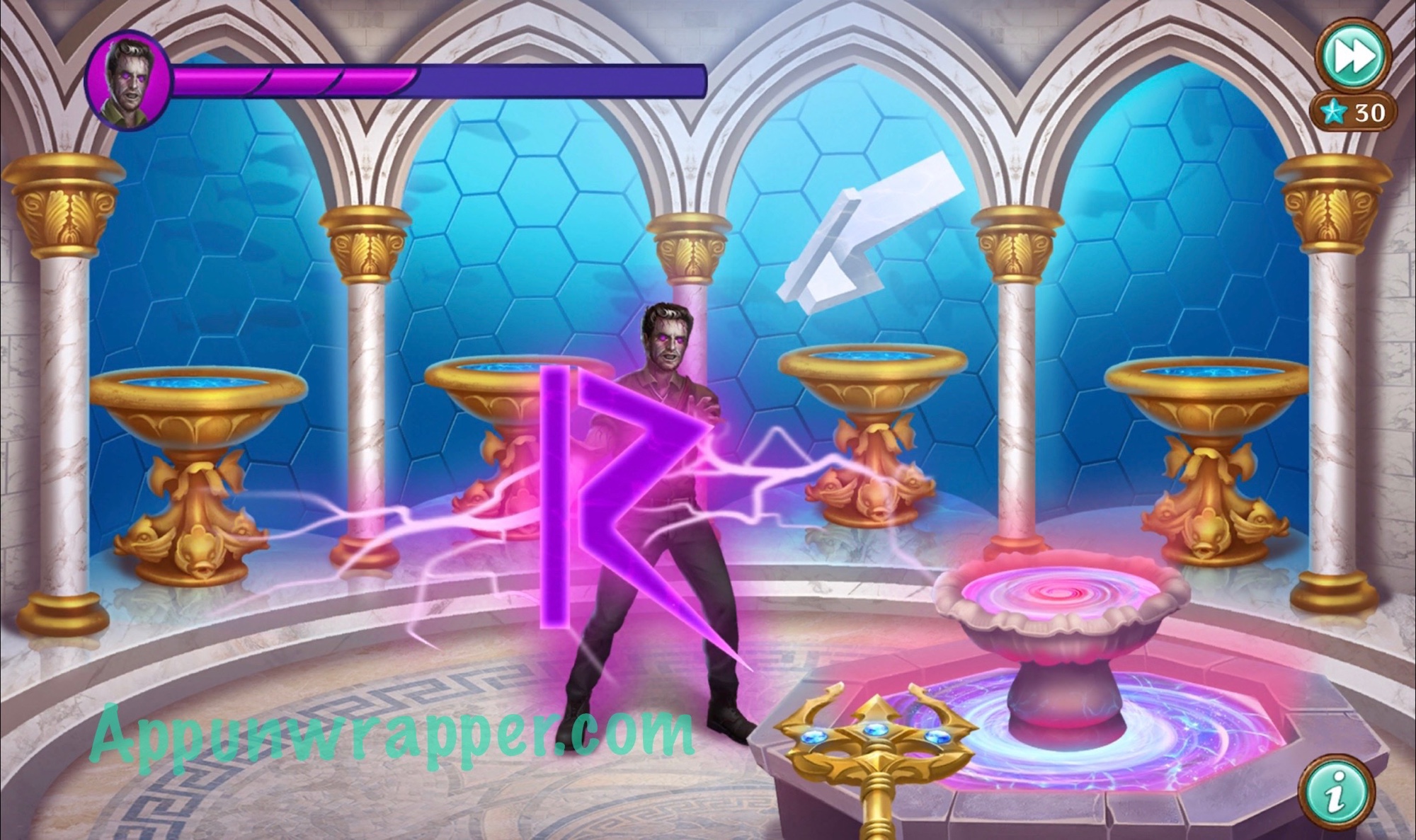 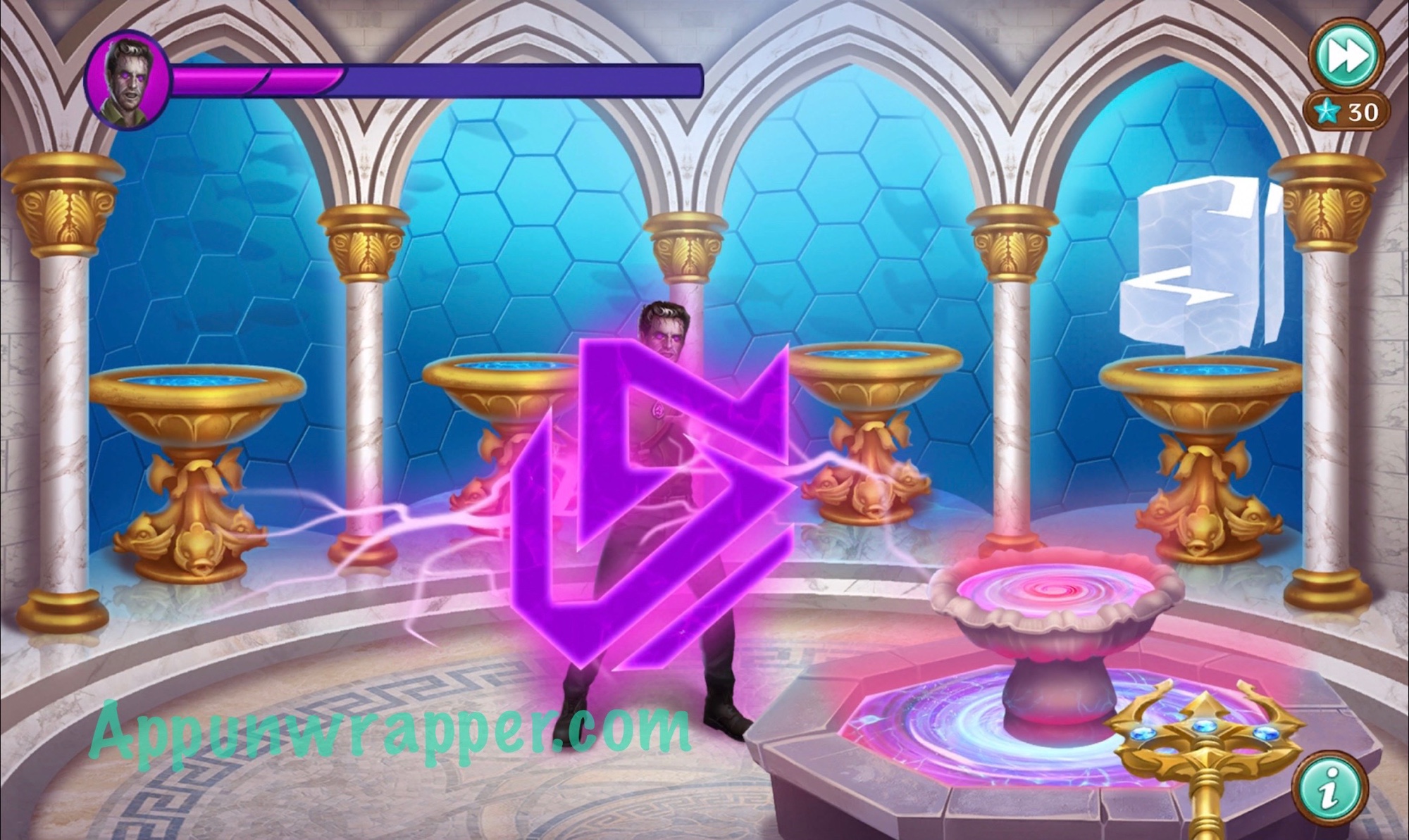 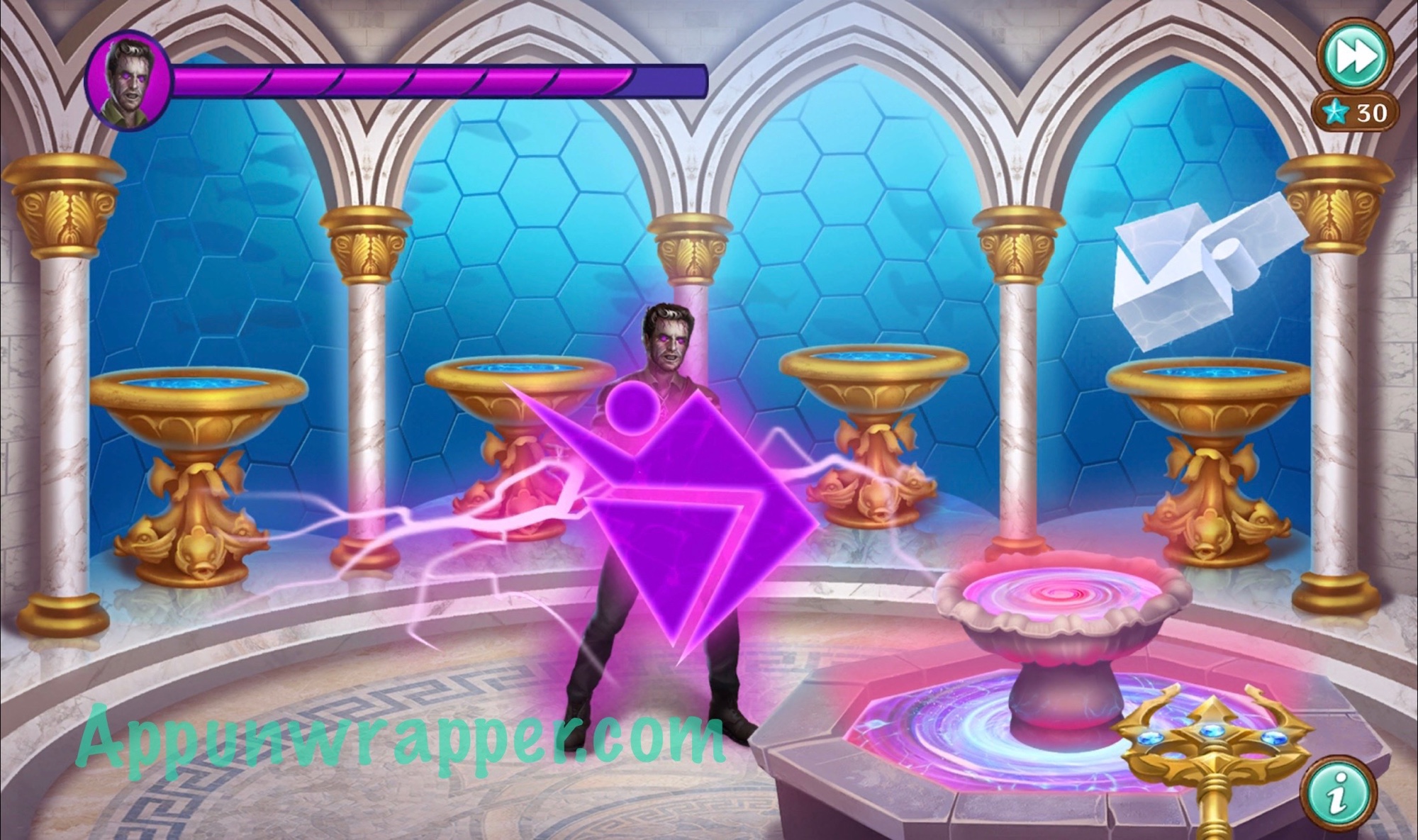 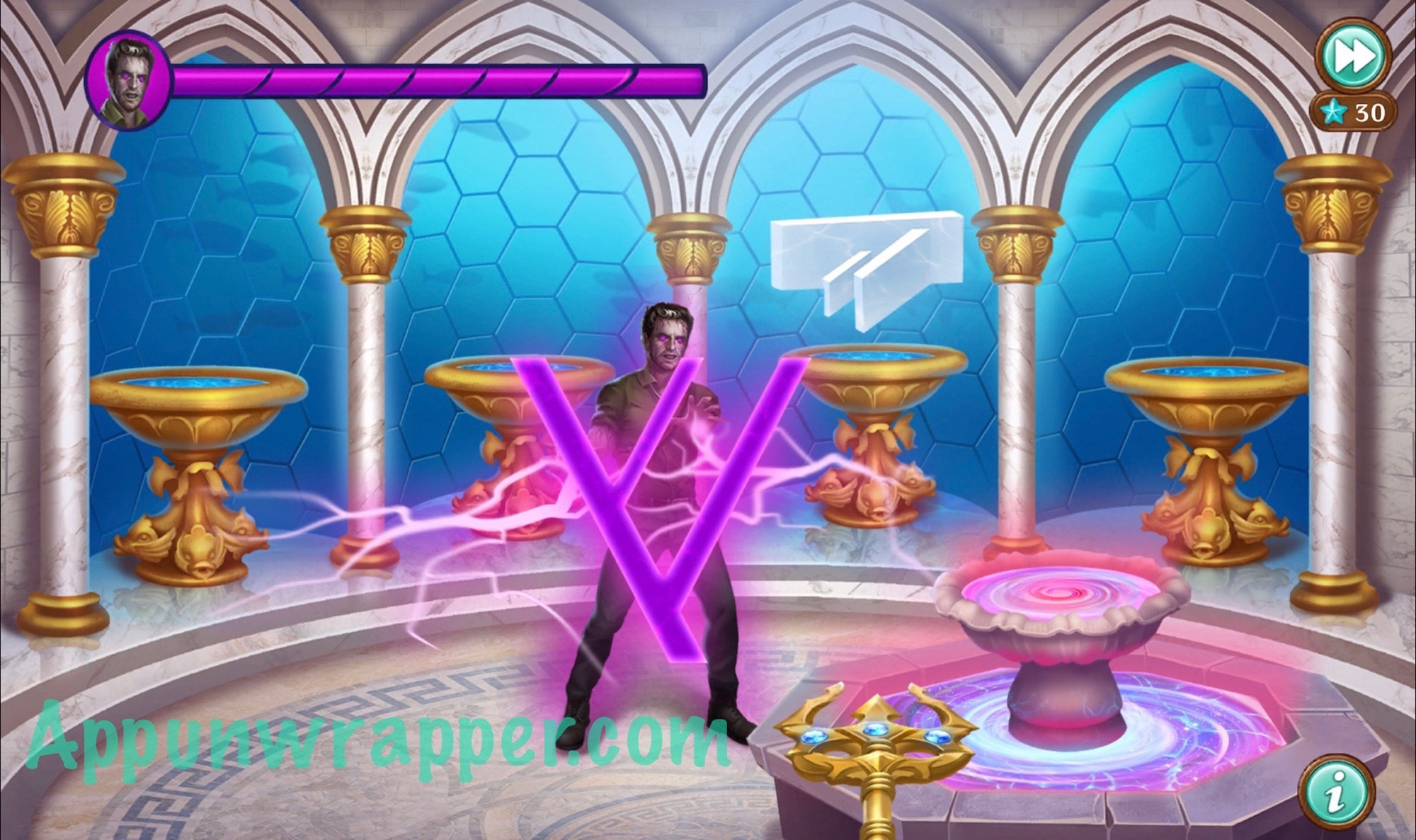 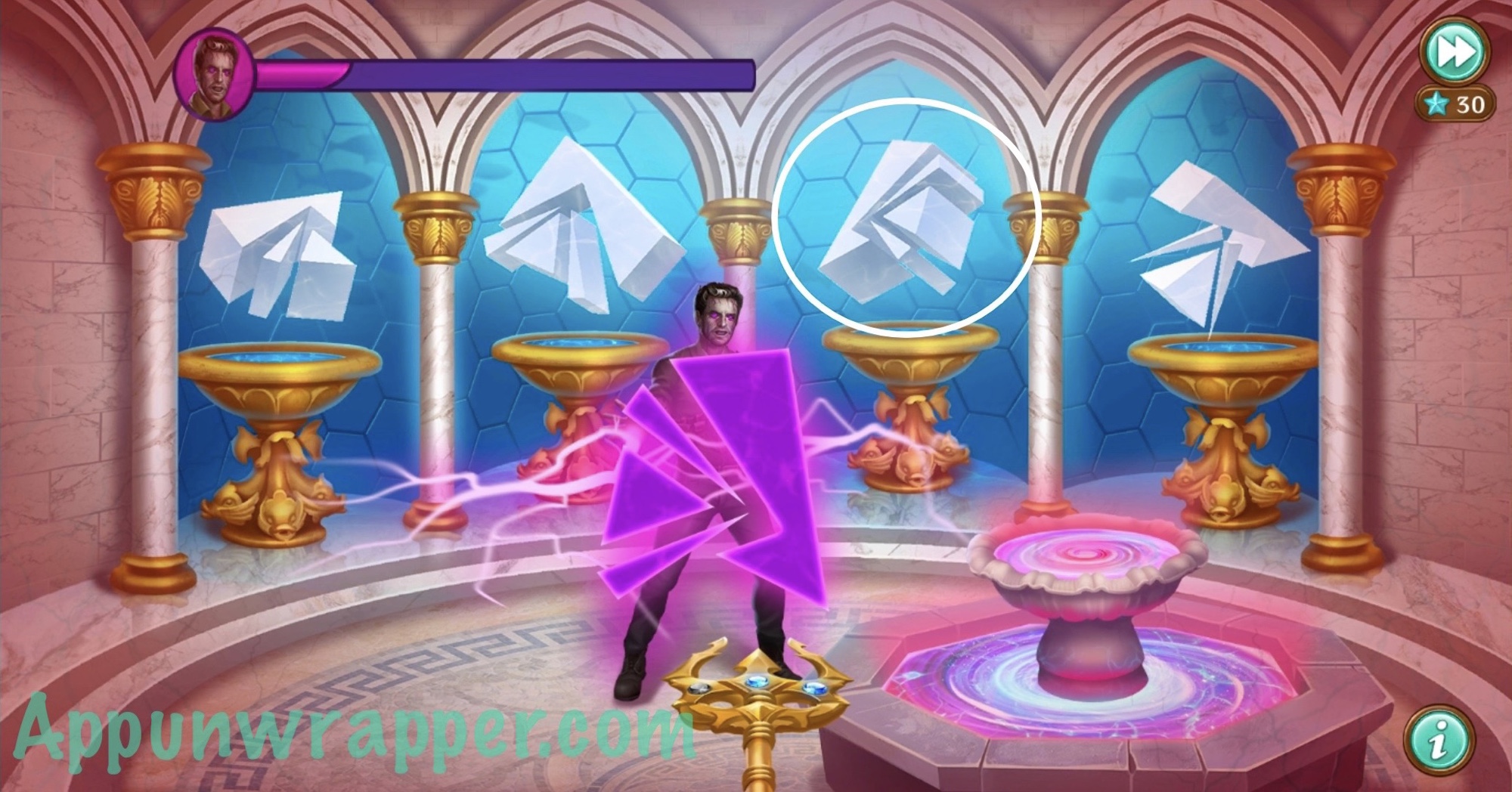 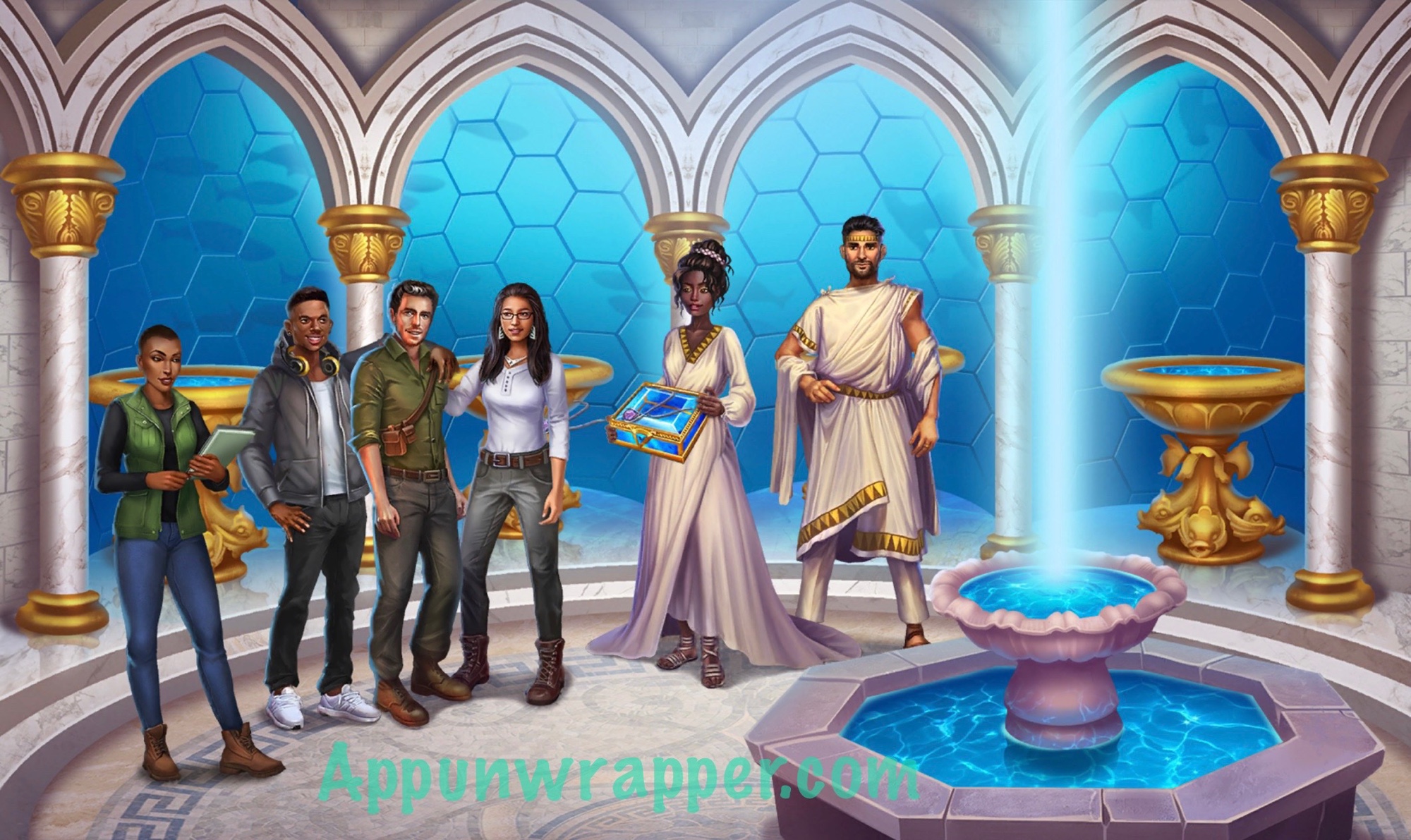