Willy Wiener and the Tunnel of Doom
By MobiDojo LLC 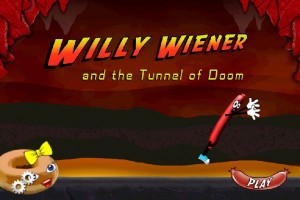 ***Note: There’s a promo code for a free copy of Willy Wiener hidden in this review for the lucky person who finds it first!***

If you see the app store description of Willy Wiener, there’s no way you’re not curious about it. You might even buy it out of plain curiosity. So is it worth it? Is it as ridiculous as it sounds?

Gameplay: 3.5/5
Willy Wiener consists of eight levels, with two rounds each. The first round has Willy falling down a pit. You control him by tilting your device left and right. There are three things you need to accomplish in order to get three stars and the highest scores: last a certain amount of time, collect a specific number of coins, and one gem. While you’re doing this, you’ll have to avoid flaming fireballs and mini demons. You only have two lives, but there are winged hearts along the way that can replenish them. 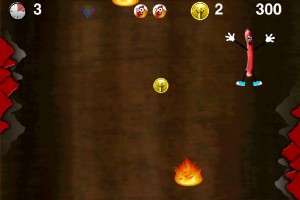 After you survive the fall into the fiery pits of Hell, you get to play round two. Here you need to slingshot Willy Wiener over various dangerous obstacles to reach Dottie Donut. You can also collect coins for bonus points. These slingshot games get pretty challenging after the first few levels, and you’ll likely have to give each one several tries before getting it. But it’s pretty satisfying when your stretchy hot dog finally lands in the donut hole (I’ll let you come up with your own jokes. All I’ll say is it brings back memories of the pickles and donuts when we read “Ethan Frome” in high school.). 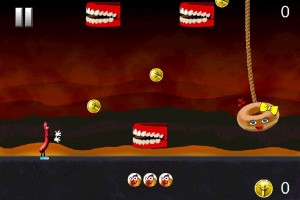 If you make it through all eight levels, you’ll come face-to-face with the evil Mr. Mephisto Maplebar, who is actually the Devil (and reminds me a bit of South Park’s Satan). The boss battle has you flinging the gems you collected at Satan, giving poor Mr. Wiener a break. If you manage to defeat Satan, you’ll be rewarded with a happy ending full of donuts and sunshine! 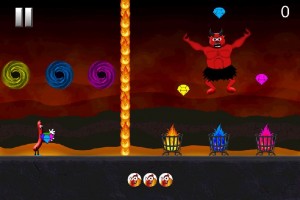 There are a few things that bothered me about the game, but they will likely be fixed in the future. Right now, you can only play the game in one orientation, so you can’t rotate the device to accommodate headphones or a USB cable. There are also no multitasking capabilities, so if you minimize the game, you’ll go back to the loading screen. This can be annoying, but considering how little time it takes to get back to where you were, it’s not a game breaker.

Story: 4/5
How can you not fall in love with a game about a heroic hot dog rescuing a donut damsel in distress? While there isn’t much dialogue in the game, you guess what’s happening from the cut scenes. Poor Willy Wiener is risking becoming over-cooked to save Dottie Donut from Hell. There’s plenty of humor (of course) in this hard-to-resist and absolutely ridiculous tale of the heroic hot dog.

Graphics: 4.5/5
The graphics are just what you would expect for a game about hot dogs and donuts in Hell. The drawings are done surprisingly well for such a cheesy theme, with more animations than I would expect. Willy’s excitement as he successfully rescues Dottie is priceless. He even turns into a ghost each time he loses a life. EF3NY6ALM4T3 All these little touches are what make the game more than just a rushed silly app. But what I’m most impressed with are the cutscenes. Before each level, you’ll be treated to a tender moment between Willy and Dottie that’s shattered as Dr. Maplebar treats Willy to a literal roasting. There are also humorous newspaper headlines that grace the screen between rounds. You just need to see it for yourself. 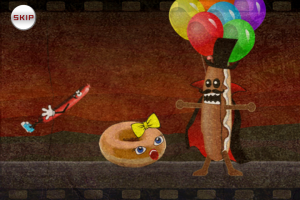 Audio: 4/5
The music sounds like it came from a silent film, which is very fitting, since the game often plays like a silent film, especially the cutscenes. It works well with the theme and doesn’t get too irritating.
The sound effects are limited, but you’ll be treated to Willy yelling “wahoo” as he’s flung through the air and a little “pow” (or “ow”?) when he gets killed. I thought it was a nice touch.

Replay Value: 3/5
Willy Wiener is a fairly short game. Round 2 of each level might take you a few tries to beat, but overall it shouldn’t take long to complete. However, there are some OpenFeint achievements, and you can go back to try to get three stars for each level and top your high scores. It’s also a game you’ll probably want to show off to your friends for the WTF factor. 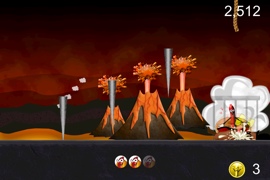 Conclusion: 3.5/5
Willy Wiener doesn’t pretend to be any more or any less than what it is. If you read the app store description and expected a complicated story of love and betrayal, I don’t know what you’ve been smoking. If you download Willy Wiener, do so expecting a trippy time-waster that’s good for a few laughs. It could use some polish for convenience, but other than that it’s a fun ride through the Tunnel of Doom. 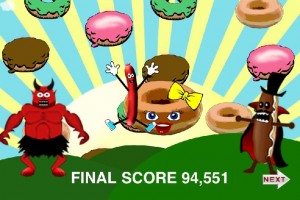